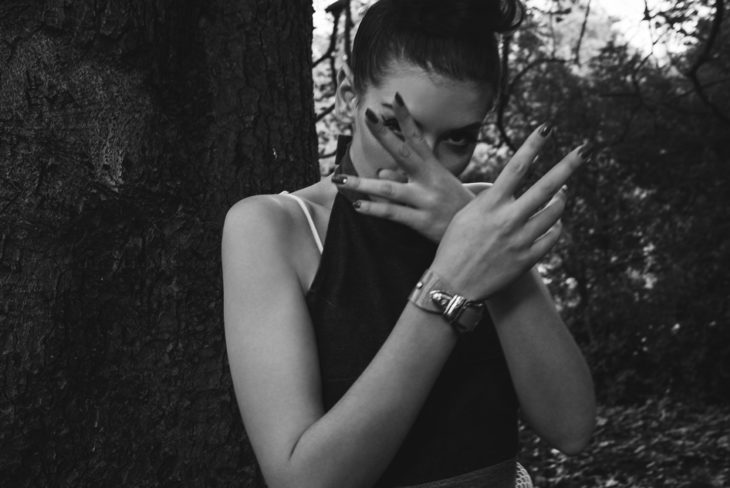 Sweden plus music usually equals Abba in most people’s minds, but the Scandinavian nation has contributed much more to the popular recording arts than that. There was Robyn, then Lykke Li, and now there’s GNUCCI. She’s not the first Swedish rapper to make some noise beyond her home shores (it’s doubtful too many will recall Papa Dee or Leila K, though some might remember Neneh Cherry), but GNUCCI is the first in a long time.

It’s probably GNUCCI’s Balkan heritage that gives her a slightly harder edge than the other names mentioned, and she has a style that has her looking like a contemporary version of Deee-Lite’s Lady Miss Kier one moment and MC Lyte the next. Delving into her back catalogue you’ll soon discover that her musical influences span the same wide range. Fortunately, she has the lyrical skills to pull it off.

Since the beginning, which was not too long ago – she released her first solo single in 2012 – GNUCCI has been doing the hard grind to make sure she enters the music world on her own terms. She raps, sings, dances, writes, manages her own career, produces her own videos and cultivates her image the way she wants to. It’s this readiness to wear so many hats and work all the way down to the bone marrow that has taken the Malmo resident all over Europe, touring her music, and now to the cusp of real chart success. “I make pussy power rap,” it says on her Facebook page, and with a new album dropping in the very near future, with the first single ‘You Good I’m Good Let’s Be Great’ out today, many more of us will know exactly what that means in 2017.

How would you characterise your past year artistically/career-wise?

‘Professional DIY Don Dada’ on her ‘free freaky feminine’. I mean, it’s so incredible that I get to independently do what I do with my integrity and sanity intact, make my trippy amazing ideas come to life with my best friends, have total power and final say over everything I do and still be a crazy lil’ party girl who gets to worldwide vibe with great women and young men. My year started heavily heartbroken and homeless so I decided to be a nomad and independently record my debut album all over the world with amazing people and, during that process, I’ve had so many incredible life-changing self-help moments that resulted in new songs, friends and lovers.

Which artists, alive or dead, have influenced you and your career the most?

It can be hard to keep centred in the entertainment industries, especially when success comes when you’re young. How do you keep your head together and not lose yourself as more and more success comes your way?

Well, I’ll probably have that type of success when I’m dead so I don’t have that problem [Laughs.]. A good thing I´ve done for myself is to have my own definition of success. I know myself better than anyone, so I know what I´m capable of and what I need and don’t need in order to be a good person who makes good music for good people and feels good about how I do it. I lead my own success – it could be the reason why I feel like I attract, work with, soundtrack and entertain other like-minded leaders rather than followers. There’s an unhealthy pressure and focus on ‘How much?’, ‘How many?’ and ‘How often?’, because it is a number-thirsty industry, but I try to focus on ‘How good?’ and hold on to my thirst for sanity, happiness and healthy hype tighter than my thirst for big money and large audiences.

“I feel like I have created my own lane and biz-bubble by being independent and DIY, collaborating with people I personally know and admire, so ‘the industry’ is not really my scene.”

Me, my team, my people focus on positive prospering not profiting, so my business plans include self-care and love. The only breakdown I’m having is a financial one. Also, in all honesty, I’m not for everyone – I don´t need nor want to be liked by everyone. I just wanna lol, love and dance, so if situations are bumming me out, I’ll quickly, easily and nicely slide the fuck outta there and stay the fuck outta there. Once I realised and believed in that, I didn’t compromise or lose myself for others as easily.

Apart from the field you’re already known for, what other artistic/creative fields are you passionate about/do you want to explore more of in the future?

I’m already all over the creative places and fields. I’m currently working on music for a documentary and tomorrow, for the first time, I’ll be directing a project that isn´t my own. These jobs I got from people who heard and saw my music videos. That’s the best thing about being DIY and a curious creative control freak. No matter how or where this GNUČČI thing goes, I’m gonna die mad, knowledgeable and experienced and that, my friend, is rad af. I love girls and I love believing in people, so I guess I’d like to be a professional business cheerleader to young women who wanna make music.

What is your biggest regret or what one thing would you go back and do differently if you had the chance?

Growing up with Chileans and not learning Spanish and not wearing my braces correctly are my biggest regrets.

Beyond the creative/entertainment fields, what moves you? What do you care most about and why?

I care so much about so much. Fucks are given all day, every day. It´s exhausting.

How would you describe your next 12 months? What are the big career points you’ll be looking forward to during this time?

My debut album ‘You Good I’m Good Let’s Be Great’ is finished and will be released on April 28th. So next year will be all about the album, more music videos and hopefully more touring. I love performing. I wanna go to South America. Can someone bring me over?!

For the latest on Gnucci moves, visit gnucci.biz and check out her Soundcloud, Twitter and Facebook pages.

This article is taken from THE FALL’s debut issue, on sale now.