Behind the Scenes, Tyga & Helena Christensen 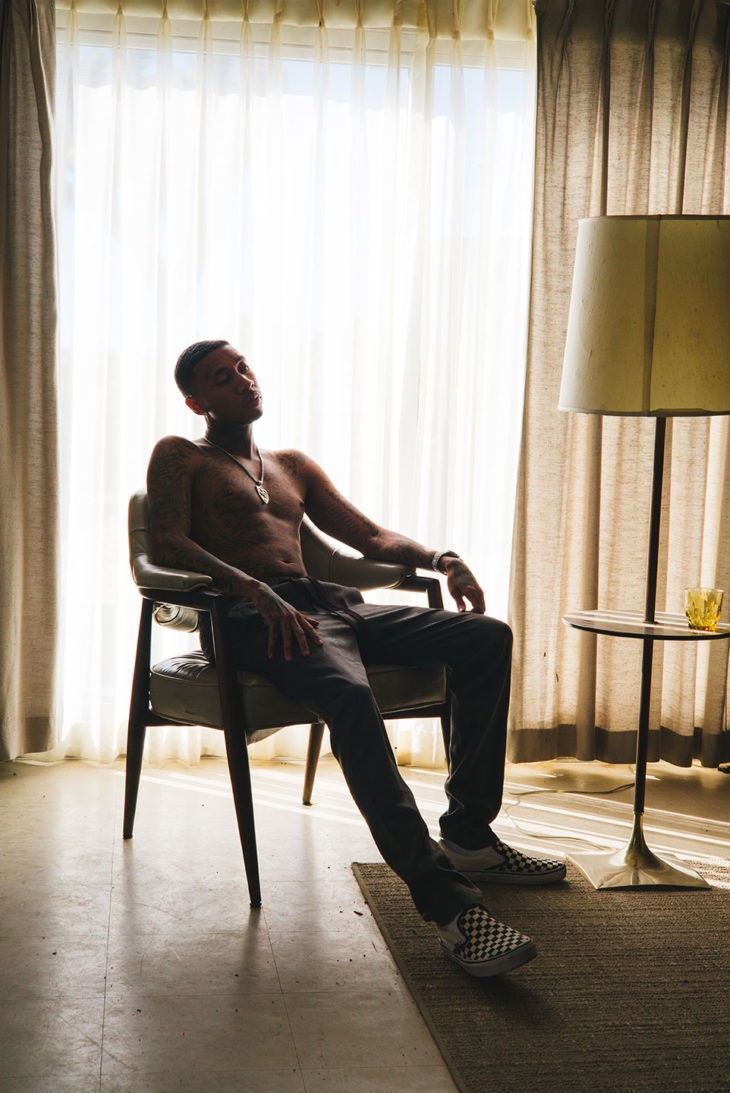 Taken exclusively from THE FALL's debut issue, go behind the scenes when one of the fashion world's most iconic models and an accomplished photographer in her own right, Helena Christensen, meets rapper and actor, Tyga.

I meet Michael Ray Stevenson – who you probably know better as the recording artist Tyga, and whose friends know him as T – in the downstairs lobby of Soho House, Hollywood, where I’ve been watching the world go by waiting for him and his entourage.  It’s a good place to do this if you’re so inclined: so many luvvies, so much air kissing and introductions and intrigue.

Then the door opens and a thick aroma of weed rushes in and Tyga comes through with three members of his entourage, all very polite, all dressed in completely box-fresh streetwear (Tyga is wearing a fluorescent Gosha Rubchinskiy beanie, a black T-shirt, some Adidas bottoms, and hi-top Vans), and they take me upstairs where we wander around the restaurant and the bar looking for a table. Tyga stands there watching a video on his phone of some expensive car rims in a dealership. Everyone in his entourage looks at their phones a lot. It’s like hanging out with any of my friends – except when he checks his Instagram he has tens of thousands of notifications, as opposed to the ten or twenty I might have. I’m betting he gets better sexts than me too.

Eventually we’re seated beside a glass wall with views out over west Los Angeles and a Red-tailed Hawk gliding right past us at eye level.   I want to ask my first question but Tyga is too hungry so we have lunch first. He orders chicken soup, half a roast chicken, truffle fries, and a Sprite.  He starts feeling sick so the waitress brings him a paracetamol or something like that. He doesn’t really eat anything (none of them do, even though they’ve ordered over a couple hundred dollars worth of lunch items.  I find this reassuringly decadent).  He just slumps on the sofa and appears progressively more horizontal and unwell. He goes off with one of his buddies (I think to smoke a joint, but who knows) and ends up texting another to say he’s being sick in a toilet somewhere in Soho House. That was the end of our first interview attempt…

“Music is in me. The Story. The rhythm. And the acting and the fashion is an extension of that. It’s all one”

“My mom and uncle were doin’ their thing and they played whatever was hot in the streets. And I would just learn ’em and rap”

Read the full interview with Tyga taken from THE FALL’s debut issue, available to purchase now.