Back in July we reported on the project initiated by Maison KARL LAGERFELD to pay tribute to the man whose genius also touched Fendi and Chanel during his show-stopping illustrious career.  The White shirt Project invited some of the best known names and faces from fashion, art and culture to individually customise the iconic crisp white shirt that Lagerfeld made so famous as part of his daily fashion uniform.  Forty seven people were given the honour – including names like Winnie Harlow, Lewis Hamilton, Cristiano Ronaldo, Tommy Hilfiger, Gigi Hadid, Helen Mirren and Lil Buck – who all submitted creative and intensely personal designs. 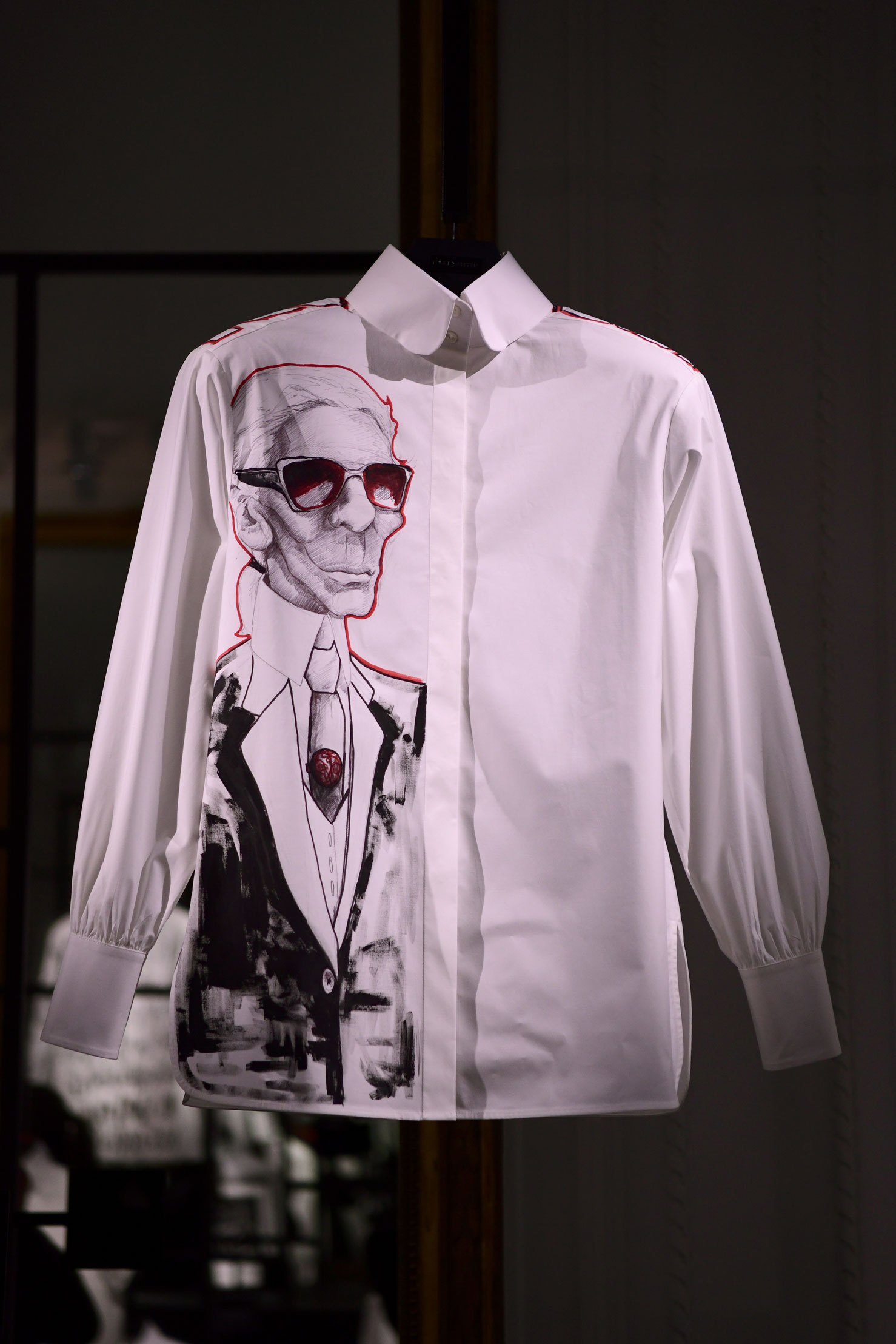 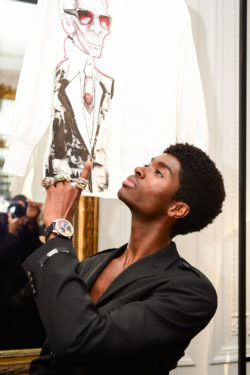 These designs were finally exhibited to an excited public at the home of Maison KARL LAGERFELD in the heart of Paris during Paris Fashion Week.  Naturally, with such an event at such a time and with such a purpose, it brought out the assembled great and the good for the spectacular launch of the exhibition on the 25th of September.

For the first time we were able to see loving graffiti style caricature of the great man that was on the design of the shirt by Alton Mason, the first black male model to ever walk a show for Chanel.  It was also a theme echoed in Lil Buck’s more cartoon graphics representation, Kaia Gerber’s abstract art representation and Nadja Swarovski’s pencil drawing representation of the same idea.

“Karl always said that with everything you do, you need to surprise people.  This is a wonderful, creative way for us to honour his legacy. The overall reaction has been quite fun, and Karl would have loved that.” – Carine Roitfeld, Style Advisor at KARL LAGERFELD and curator of the global tribute project. 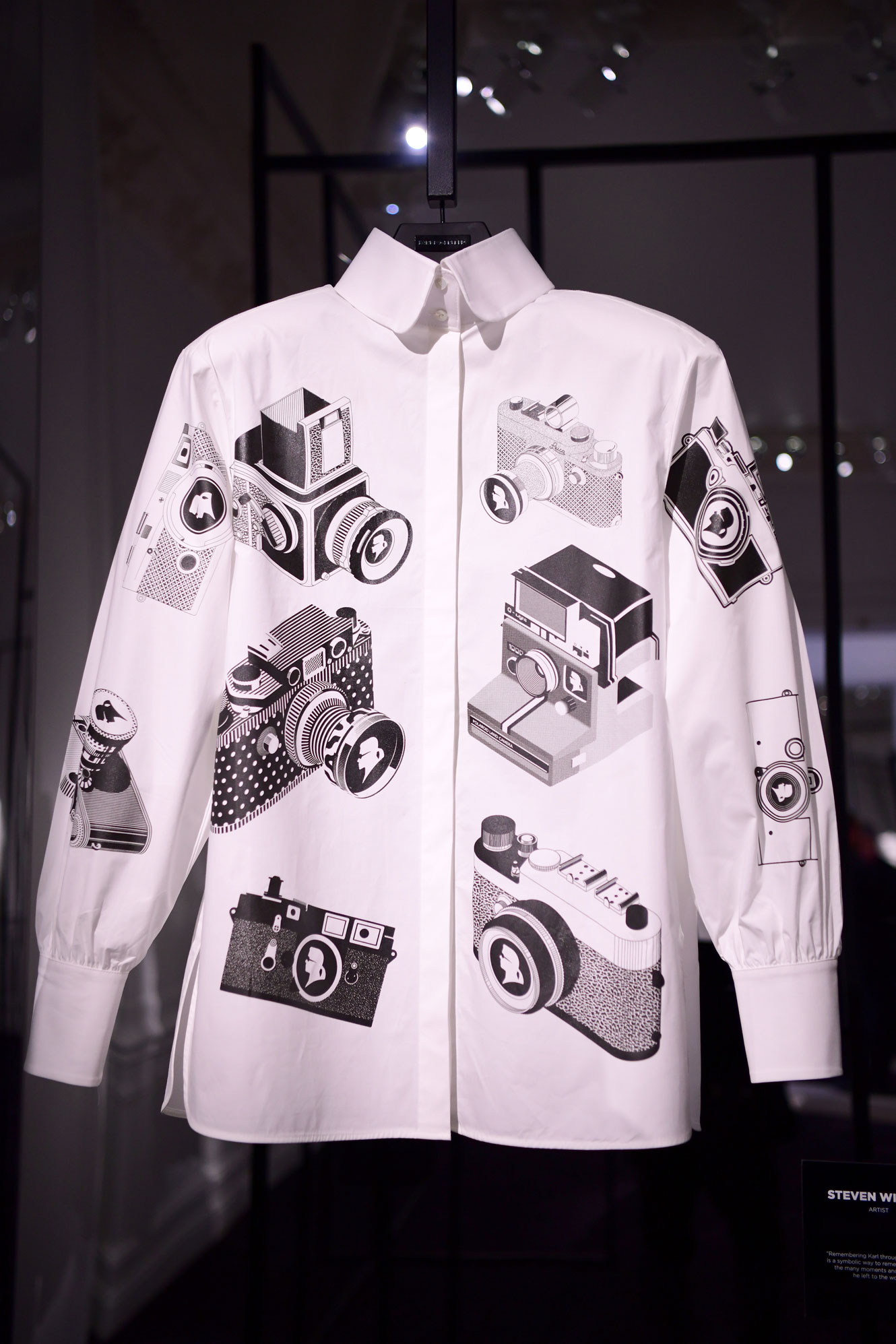 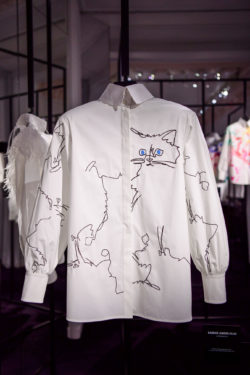 Some of the notable other mentions should go to, first, illustrator Steve Wilson who channelled Karl’s love of photography and adorned his version of the shirt with large graphic images of the cameras Karl loved to to use throughout his long career.

Despite the level of creative competition, however, only seven final design were chosen to be produced and go on sale at Farfetch, one of the world’s biggest fashion companies and a partner to Maison KARL LAGERFELD in this tribute.  The seven chosen designs were: 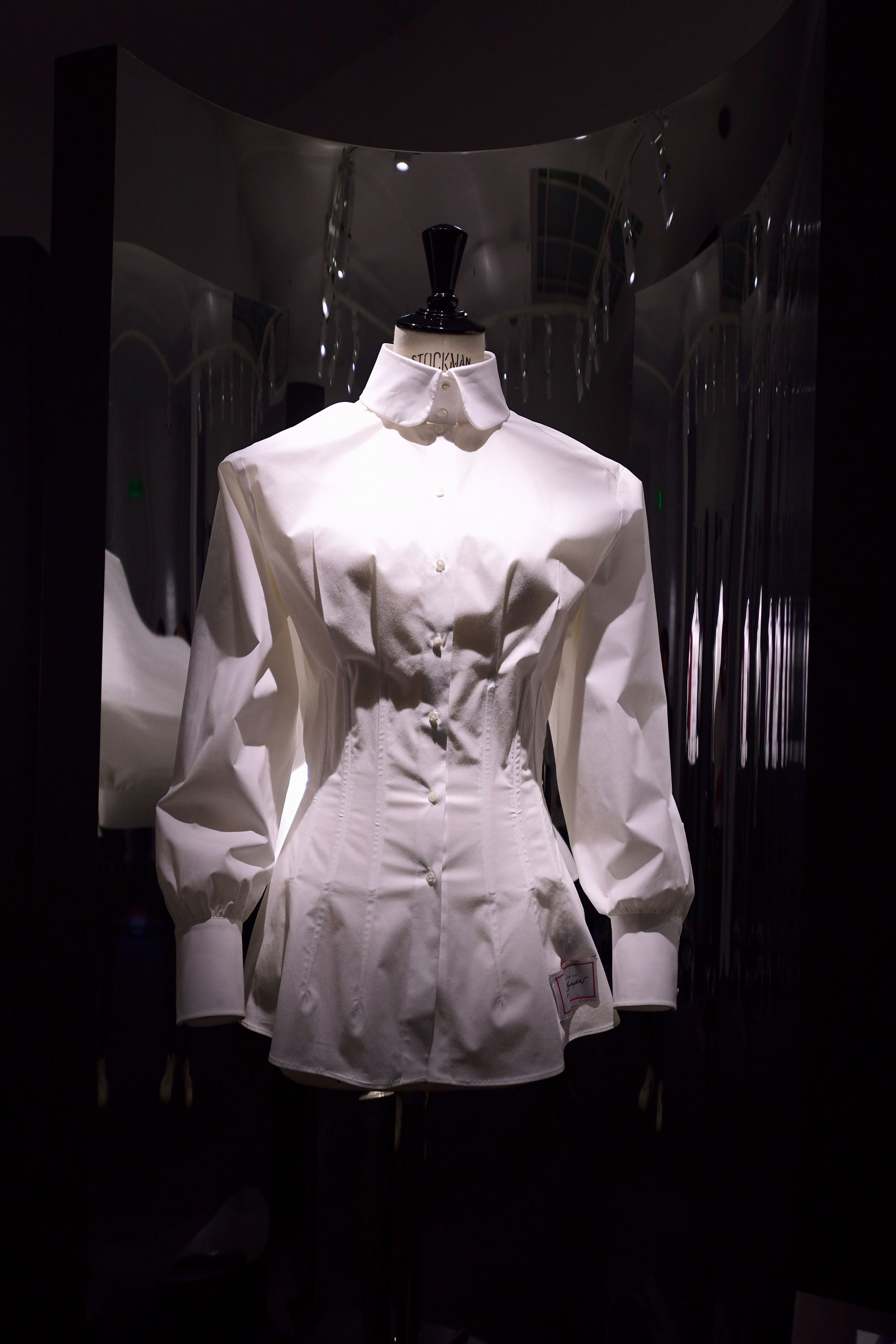 “I’m a Virgo, as was Karl. Virgos inherently feel that everything needs to have a reason behind it — so if you make a shirt with certain seamlines, every seamline has a purpose. I wanted my shirt to have a corset, made with strong boning, and then I opened one side of the collar so it’s as if you ripped it. Karl liked tight shirts and high collars, but I love an open neckline. The result is punk meets couture.” 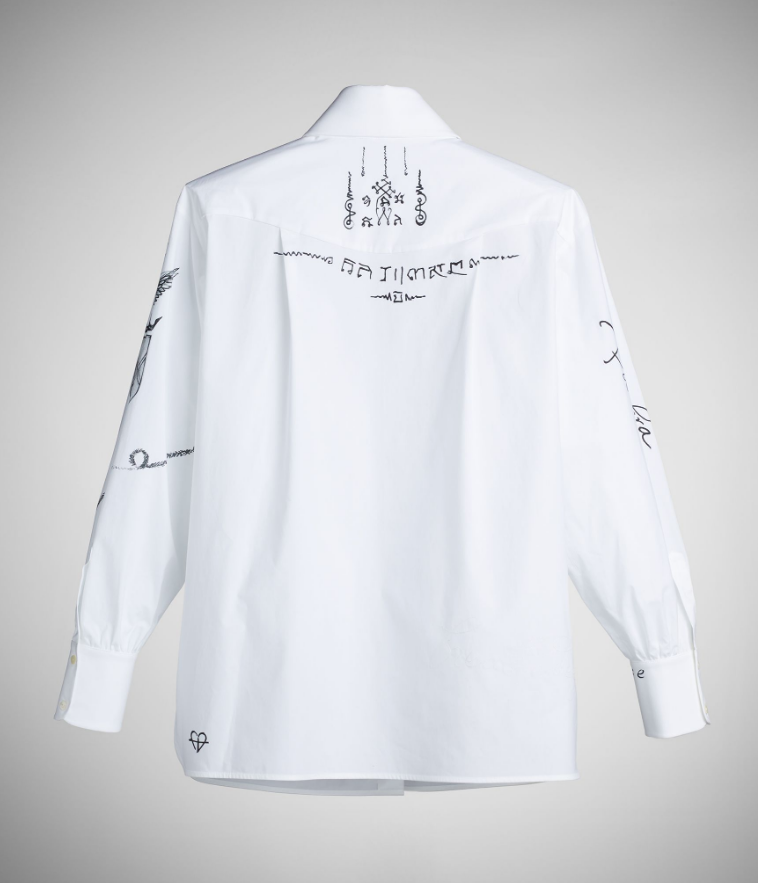 “Karl was always fascinated by the story of my tattoos, so this tribute shirt was a way of linking our artistic expression while honouring his memory. I will always deeply cherish each moment we had together. His personality was infectious and I was always elated to be in his presence. Everything he did will be remembered and seen as an inspiration for future generations.” 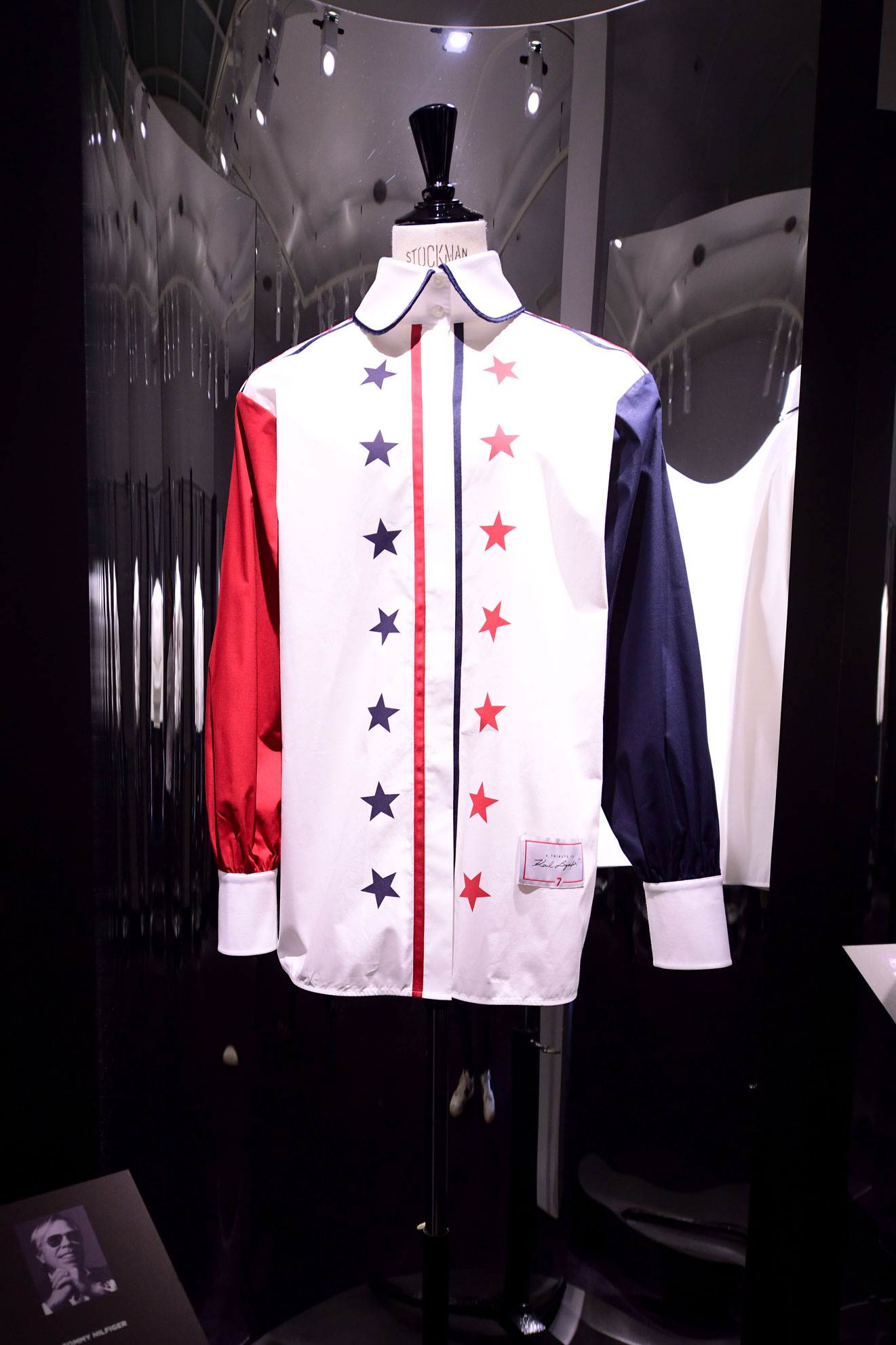 “To be able to pay tribute to Karl through design is an honor, and I envisioned the shirt as a tribute to him with a Tommy Hilfiger twist. I was inspired by his lucky number, seven, which is represented through the seven stars on each side of the shirt’s placket. We added the Tommy stripe detail to the shoulder and also reimagined his signature gloves in our classic colours of red, white and blue.” 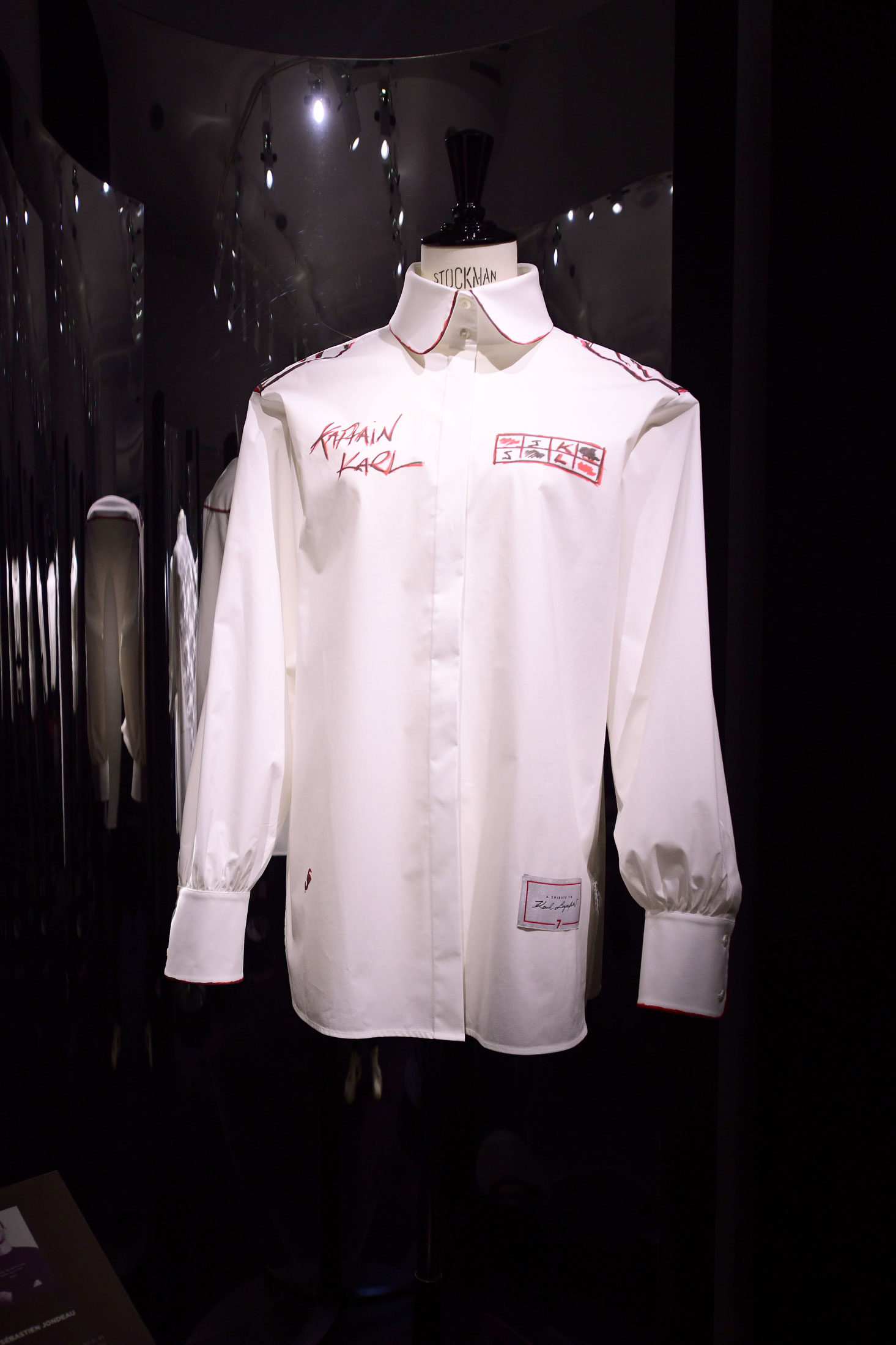 “I am proud to be involved in this tribute, as there are so many great designs by talented people. My shirt was inspired by the idea of ‘Kaptain Karl’ — like a boat captain or an army captain, but not interpreted so literally. The red trims were inspired by the border that Karl always put on his sketches and drawings. Karl’s white shirt was part of a classic uniform: white shirt, black jacket, very clean. You can never make a bad choice with a white shirt.” 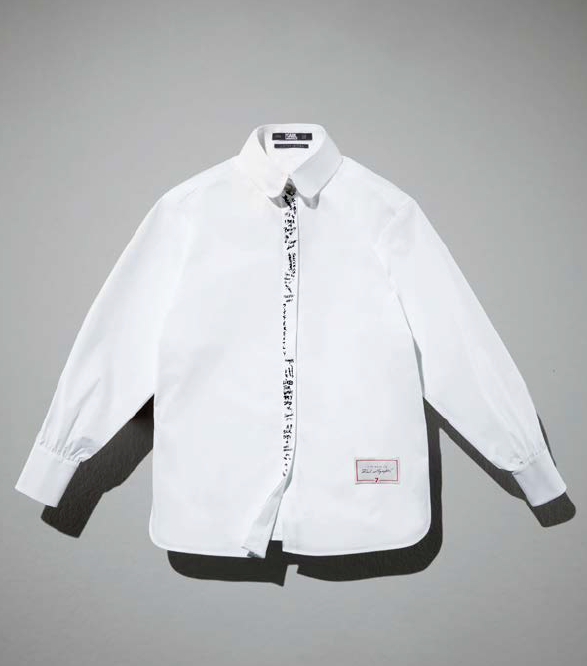 “I thought for a long time about what I was going to do with the shirt: cut it up, change the sleeves, make it tighter. Then I thought, ‘No! Karl designed this, it’s perfect!’ I could hear his voice in my head giving me a lesson about simplicity, and that’s when it occurred to me: his quotes! He always had something witty to say, and a few of his quotes have truly become iconic. I looked them up and decided to incorporate them on the shirt in a fun way.” 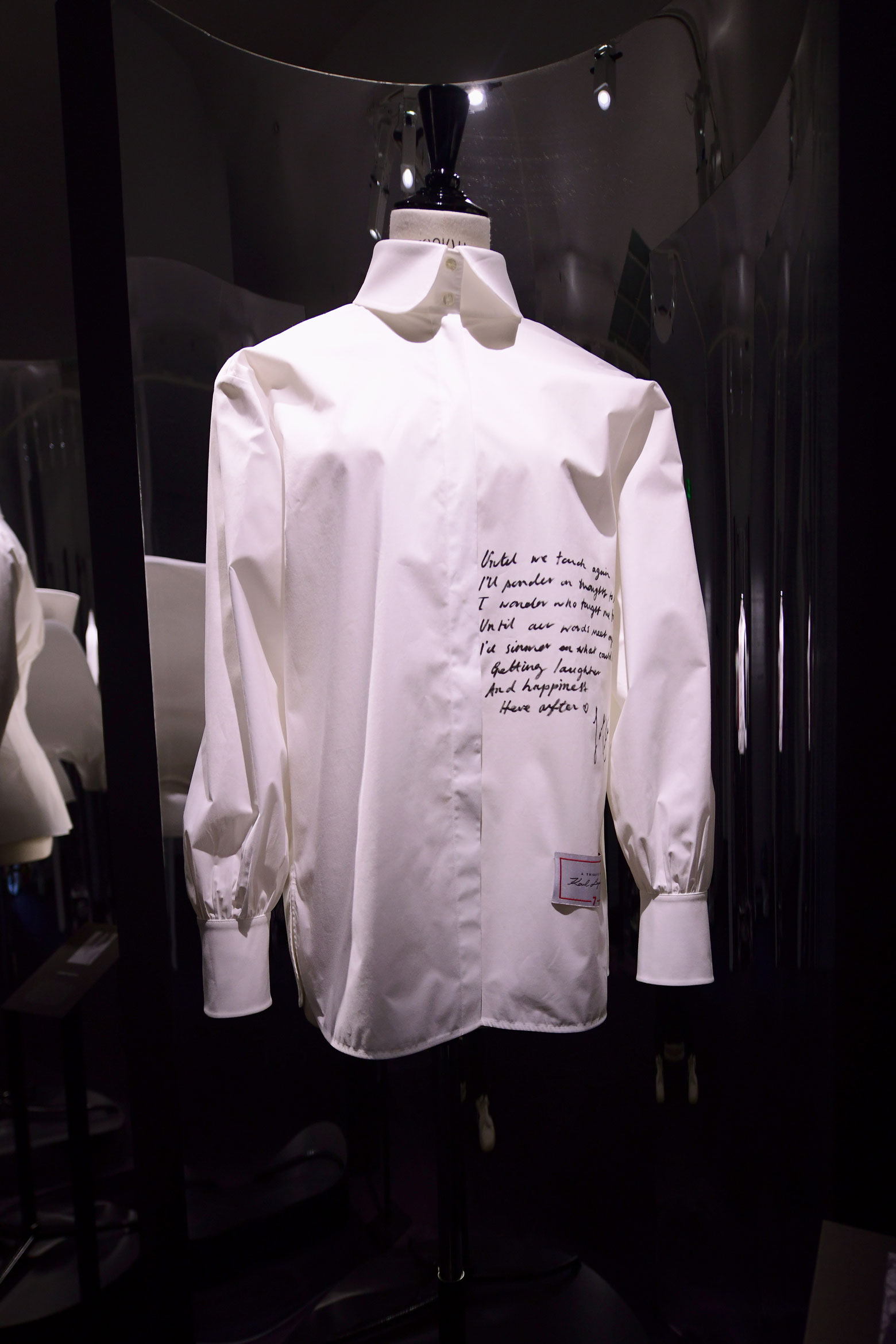 “The poem was written by Sonny Hall, who is a talented young poet we represent at Kate Moss Agency. I believe Karl would have loved him. The poem is called ‘Clutching Pens’ and it’s about laughter and happiness. As Karl was always holding a pen and laughing, I think it is the perfect tribute to him. Karl was always looking to the future.” 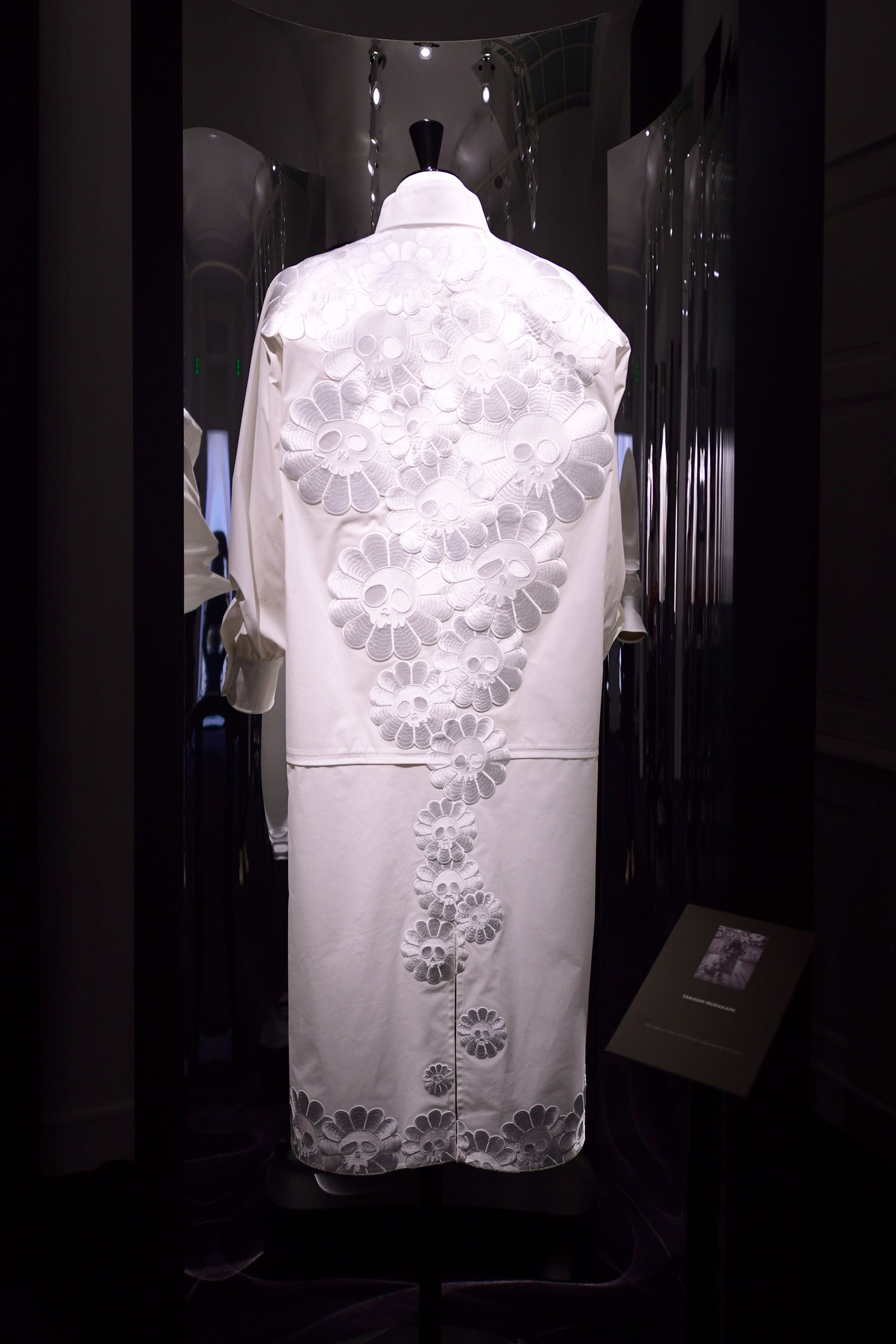 “Karl’s greatest legacy is that he managed to maintain the value of his brand over many years. The artistic concept of my shirt is that you win if your work continues to be talked about for decades. If it doesn’t stand the test of time, you lose. Creating this tribute shirt was a very emotional experience for me.”

Each of these shirts have been produced in limited runs of just 77 apiece and are now selling for €777 each, with all proceeds going to French medical research charity, Suaver la Vie – an organisation close to Lagerfeld’s own heart.  In this way perhaps the most fitting tribute will be in the artistry and creativity inspired in others by the great man that will keep evolving and defining this era long into the future.

For more information of the Tribute to Karl shirts visit Karl.com here.