In an elegant purple show space decked with candles behind glass walls and huge Medusa mosaics, the hints for what was to come from Versace SS23 at Milan Fashion Week was already being telegraphed.  Any questions left faded when the lights came on.  Gigi Hadid, Mona Tougaard, Rianne van Rompaey and Anok Yai opened the show together in skin-tight black jersey dresses with graphic diagonal cuts. 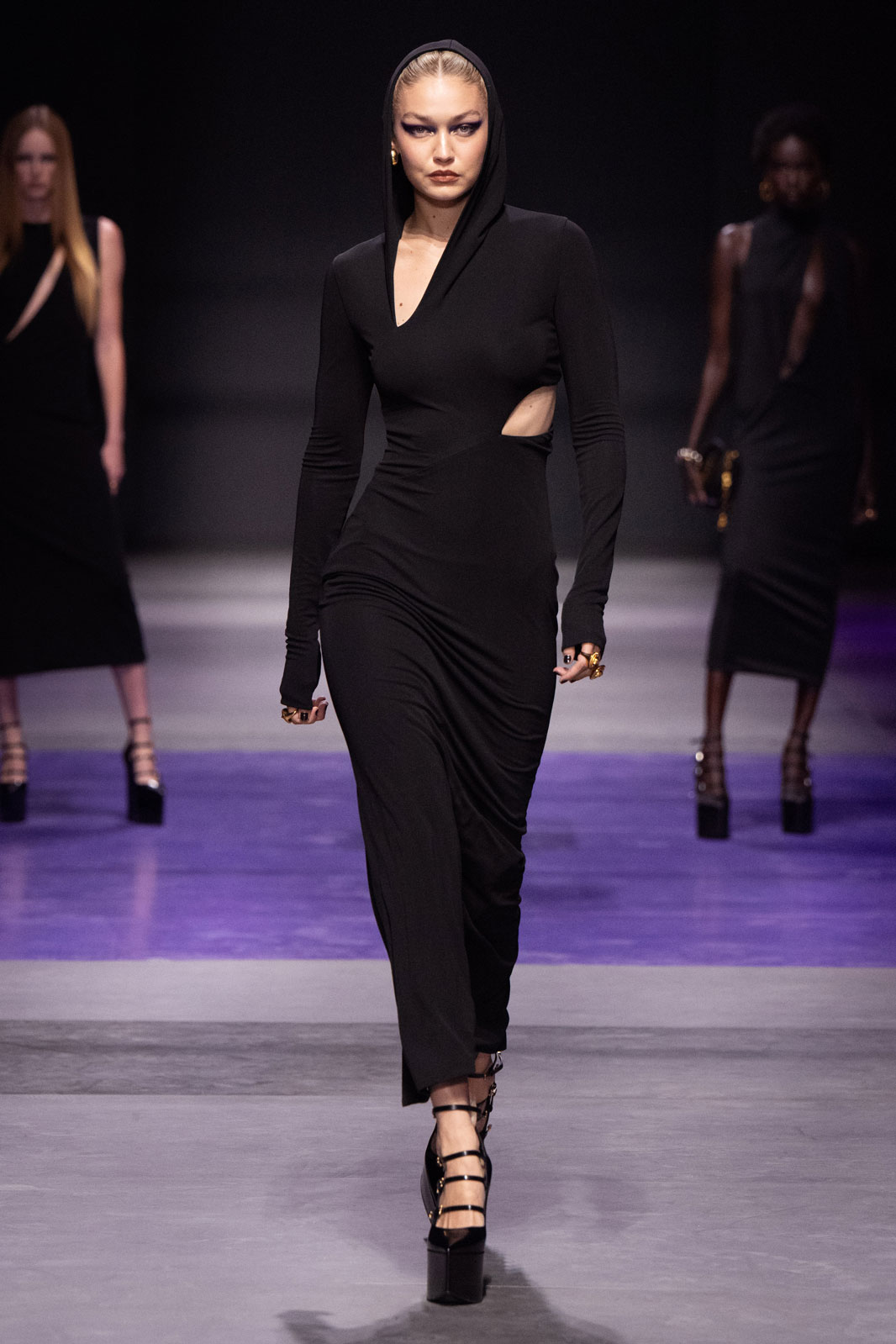 The impactful kick-off led the way for a series of sultry all-black looks.  Leather oversized biker jackets with long fringing, miniskirts and maxi belts passed through the glass cage, each one echoing a clear Y2K aesthetic.  In Donatella’s hands, it became an inspiration and a tool to sculpt a new type of independent, powerful woman.  “I have always loved a rebel,” said the designer.  “A woman who is confident, smart and a little bit of a diva.” 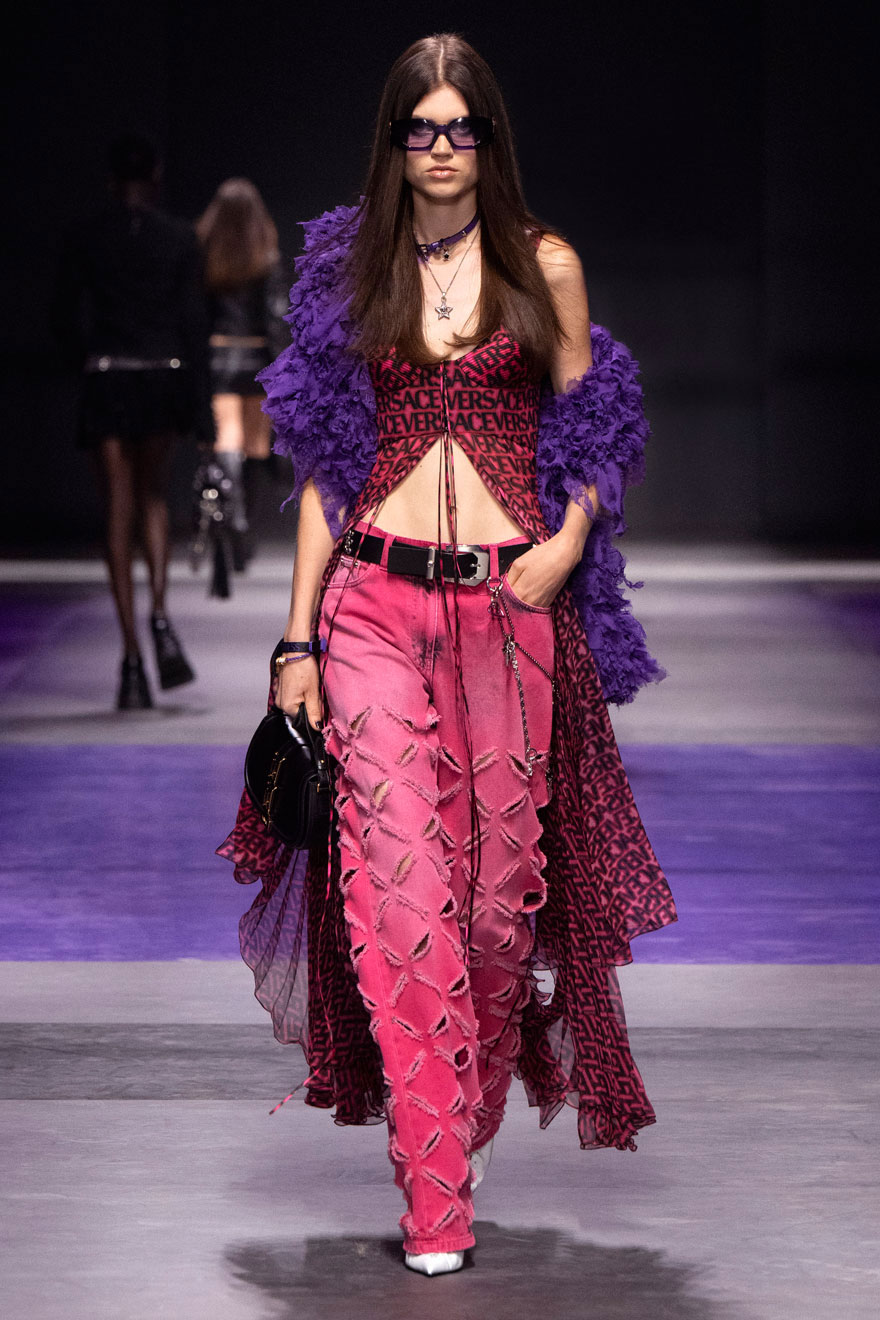 Versace’s “Goddess of Freedom” doesn’t wear just black, however.  In fact, the fuchsia and purple tones hinted at by the setting defined her glamorous, subversive personality by bestowing a “brooding glow” to the collection’s prints.  The signature “Versace on repeat” logo was repurposed on figure-hugging tops with long trains, and matched with slashed washed denim jeans and a fur-like coat made from upcycled off-cut production chiffon. 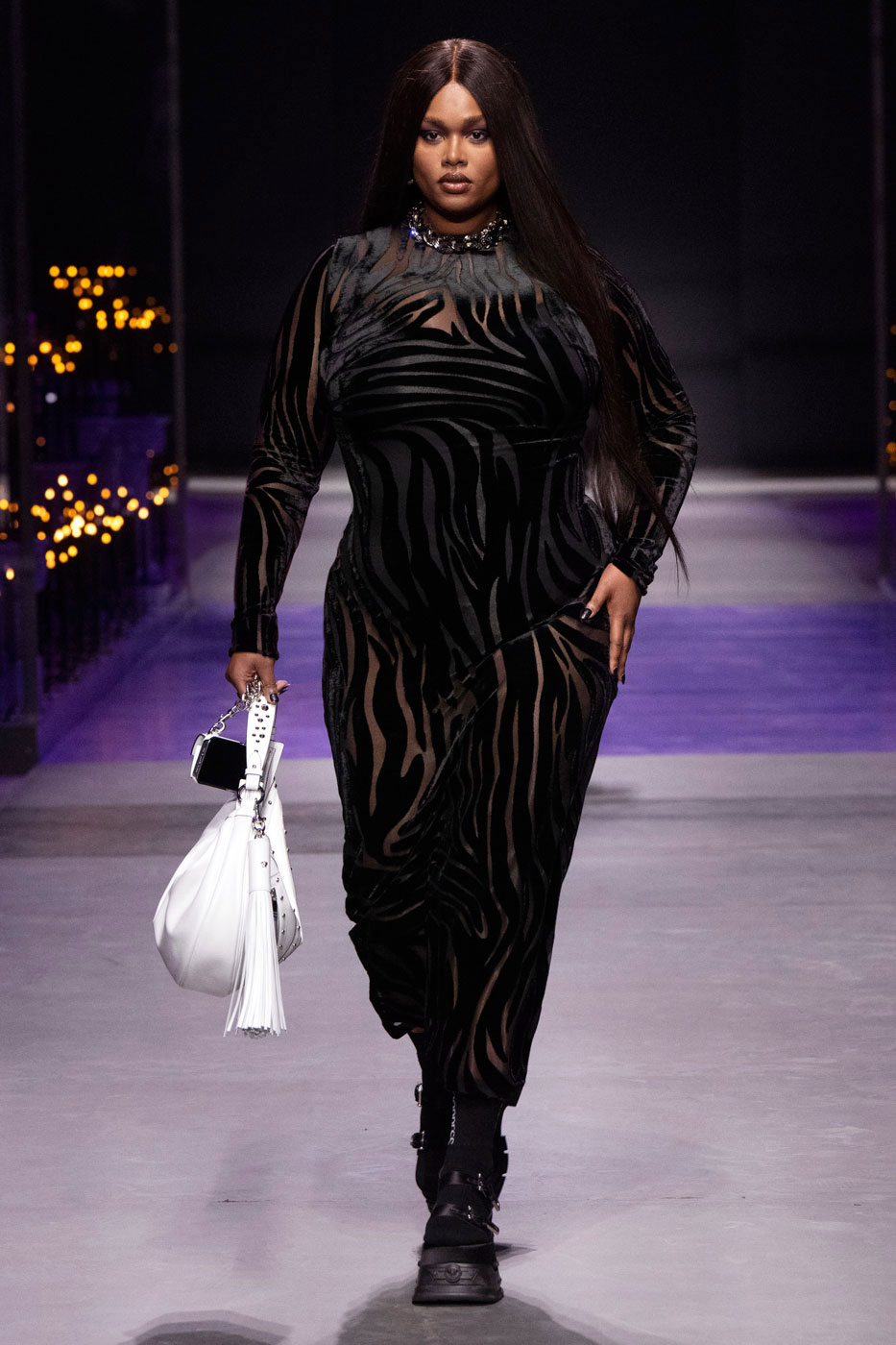 As the show continued, the gothic glamour of noir returned to make its outsized presence felt.  A beautiful sheer devorè dress opened a series of looks in which graphic fluid forms were cut out from the fabrics or traced in crystals and studs.  The meticulous work of presenting contrasting sensibilities to mould new styles continued with the accessories.  Skin-tight silhouettes were balanced with club-worthy sandals, boots and Mary Janes with chunky big rubber soles, while the La Medusa and Greca Goddess bags came either studded and mirrored, or in glossy green and purple colours.

For the finale the nuanced cycle repeated itself.  Seven dresses and baby dolls in fuchsia, purple, black and acid yellow, and all with matching veils, walked down the catwalk to reveal pop culture darling Paris Hilton closing the show – an original Hollywood diva.