“You can invent something extra when you lose the connection,” quips a relaxed Italian-inflected voice through the computer speakers.  “It’s our own wind moving between us, and you can add what you want and then take it all away.”  Toni Meneguzzo joins the transnational video call from the 29 Arts in Progress gallery in Milan where his new exhibition Diptych is on show until November 19th. 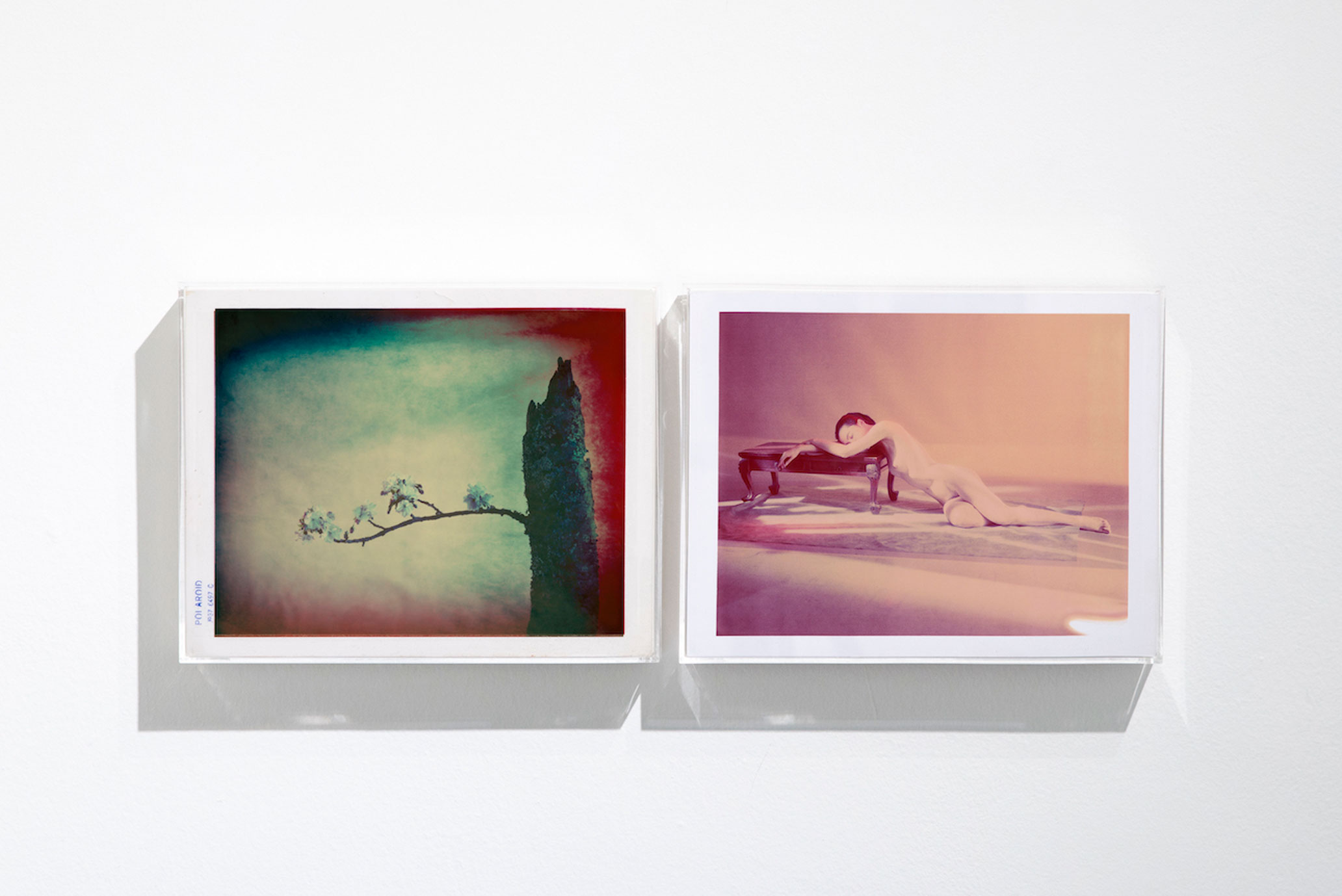 An acclaimed visual artist and fashion photographer, Meneguzzo has already achieved over four decades of international notoriety.  He’s the visionary that brought large-format Polaroid to the forefront of editorial and fashion campaigns, shooting for the likes of Issey Miyake, Gianfranco Ferrè, and Printemps before travelling to India and Sangam to live with and document a number of communities and their Hindu practices.  On the screen, his crisp seersucker and square-frame glasses feels entirely at home in the clean white gallery space. 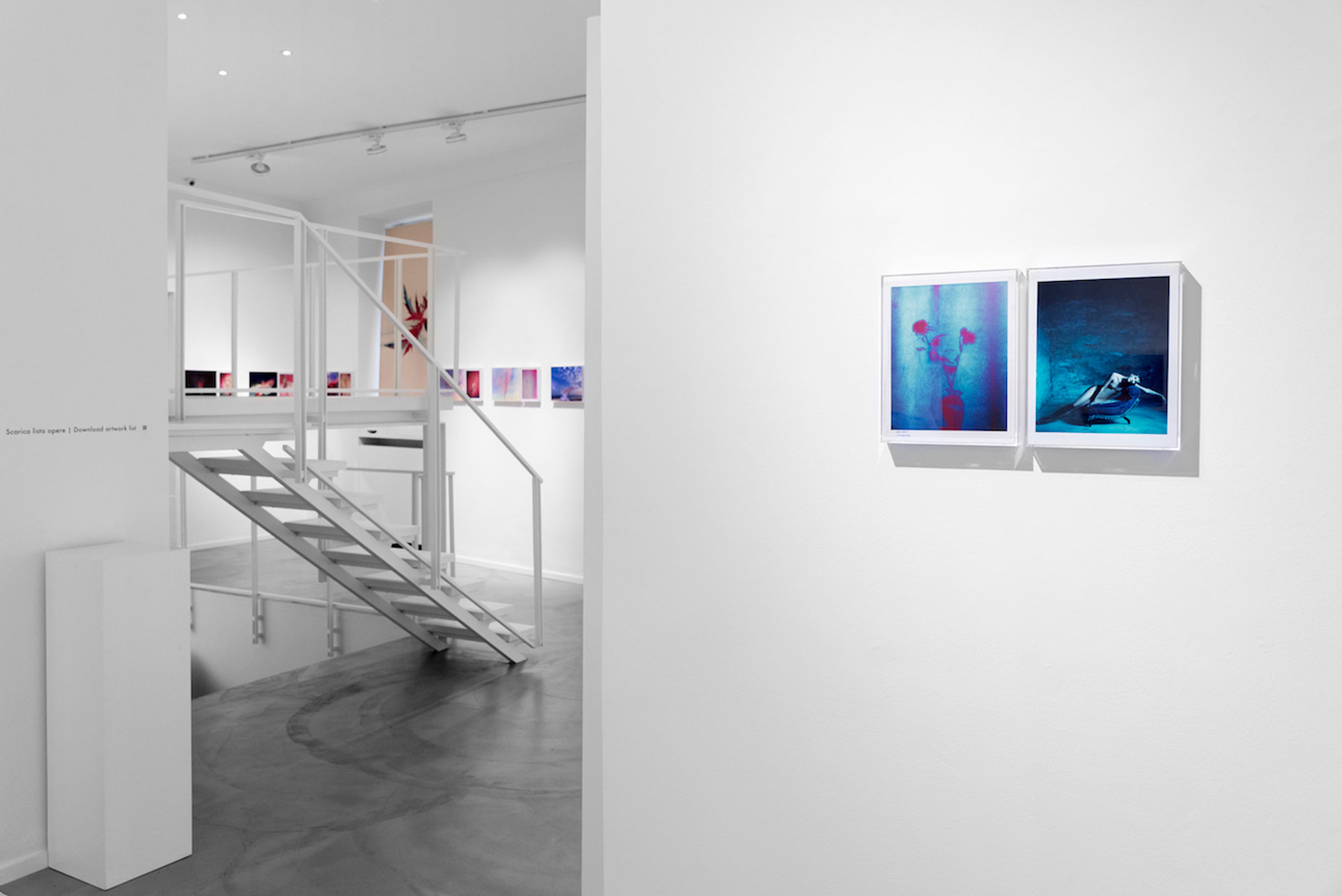 Diptych, the culmination of a career’s worth of work and exploration, opened on September 20th in the heart of the city as the first shows began at Milan Fashion Week.  For Meneguzzo, this return to Milan was a shift away from his earlier career of documenting fashion designs and the models wearing them.  Now, the photographer’s artistic history, ethos, and practice are the centrepiece, and Meneguzzo is the subject of discussion. 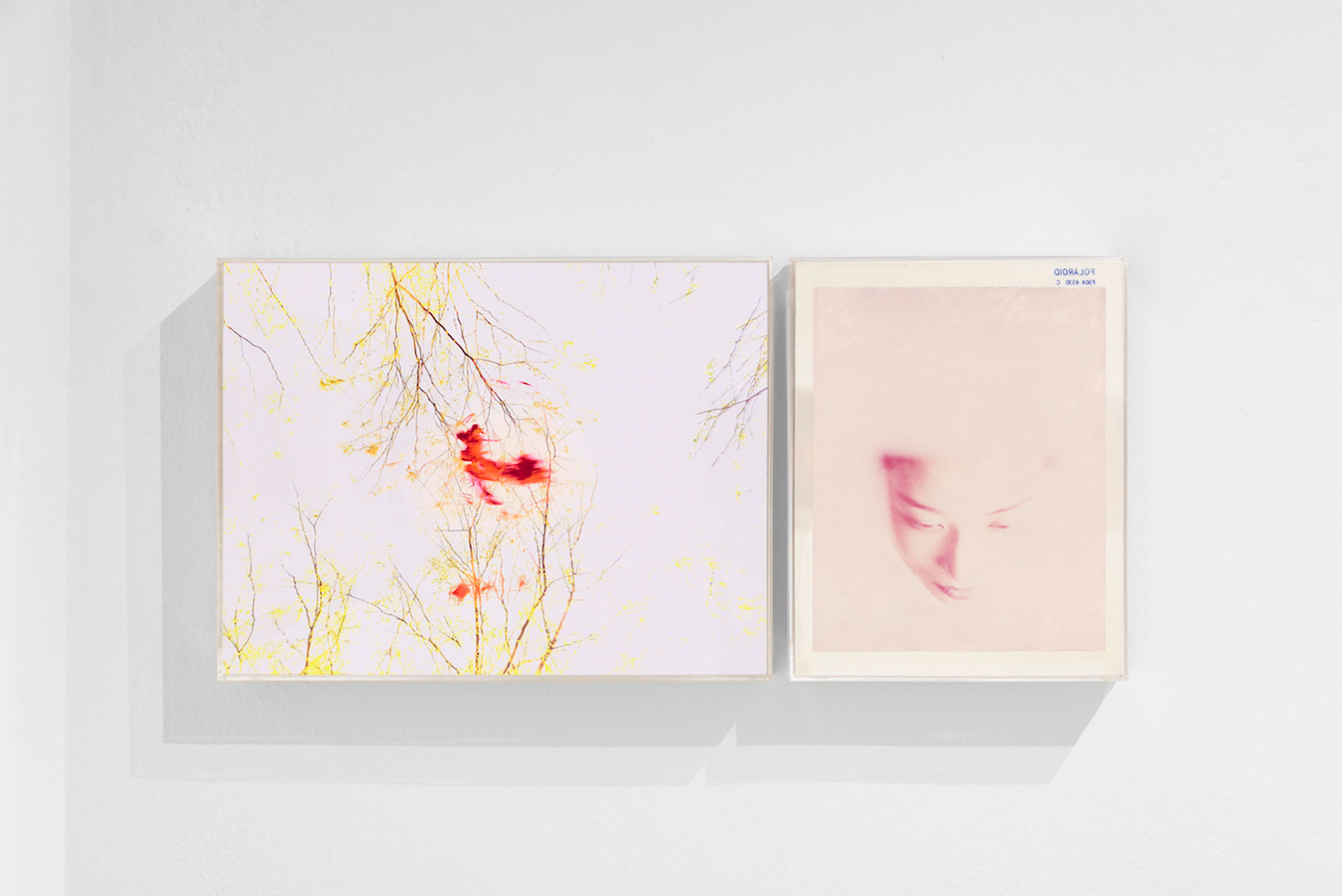 The new exhibition revolves around evolution, intellectual discourse and Meneguzzo’s innovative artistic practice.  Melding past, present and future through curation and revised artworks, the show opened with the launch of the companion artist’s book of the same name featuring all exhibited works, a selection of critical texts and a curatorial statement from Ivo Bonacorsi, artist researcher at The Paris College of Art. And, just like the life seen in his images, Meneguzzo’s story is one that feels present and full of possibilities. 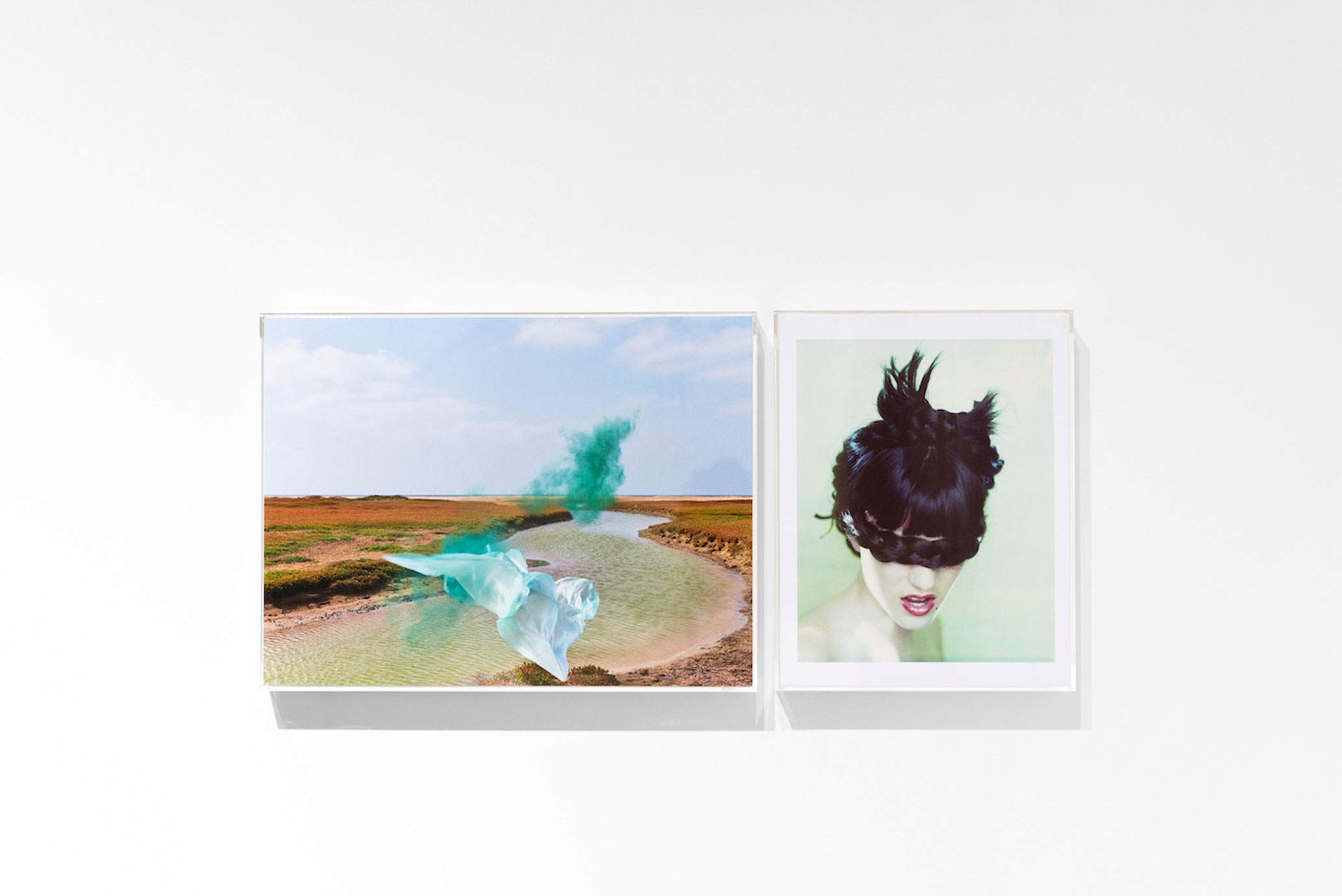 Sorcha: It’s an honour to meet you, Toni.  Your artistic process is marked by precision and ambition. I’m intrigued by your unique digital-analogue process. How did you approach the creation of Diptych?

Toni: I’ve been doing some digital work recently, a landscape series I call “Cause and Effect” [“Causa Effetto”].  I programme everything in the studio, then I go outside.  There, I choose the landscape and I release coloured pigments.  They fly everywhere. I expect them to fly in a certain direction, but the wind always changes that. 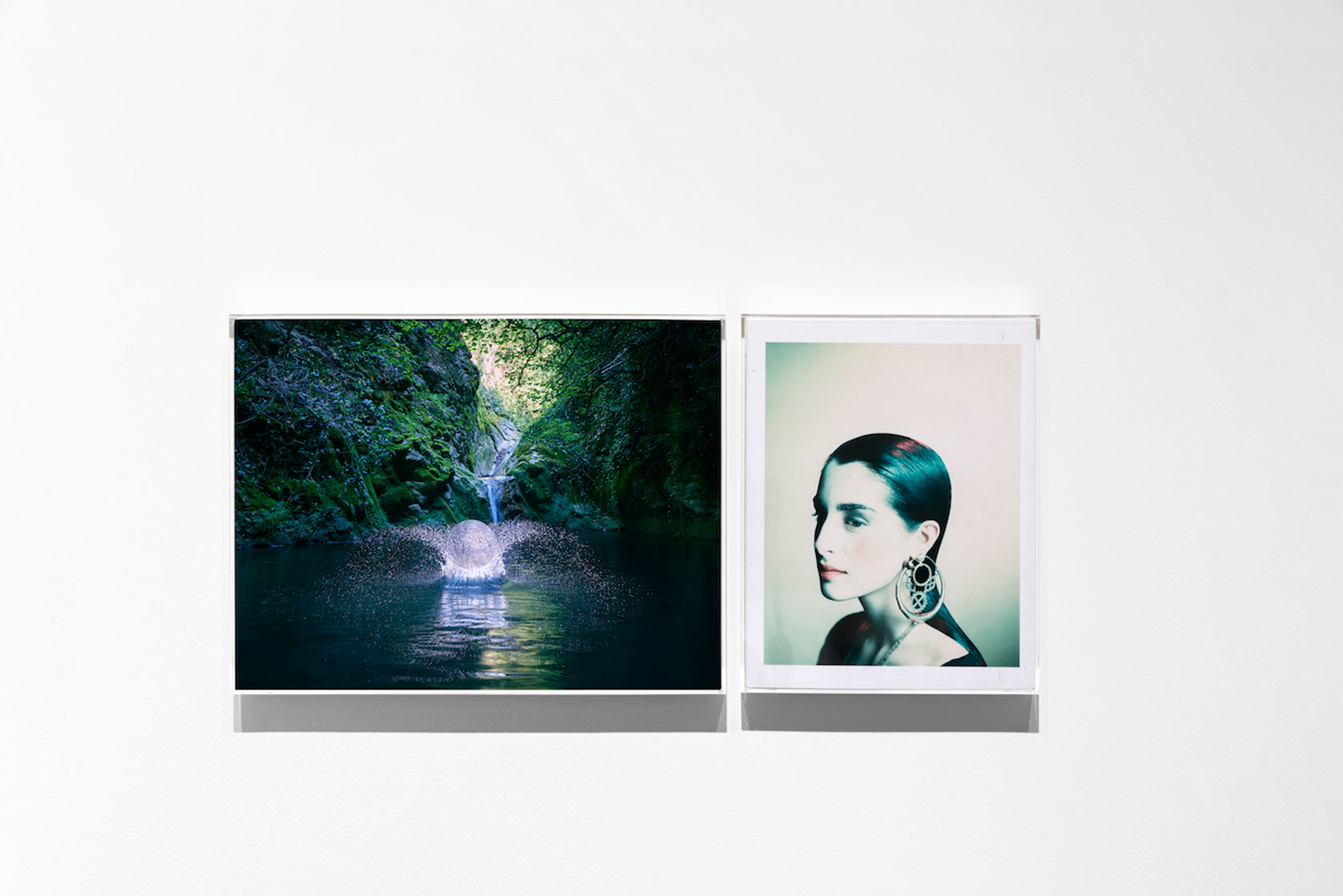 The wind is the real artist.  It isn’t me anymore.  But I chose to keep each pigment separate.  Let’s say blue from the right and red from the left. I didn’t want to mix them. So, I hung plexiglass on the tripod and the pigments bounced against it.  Or, I constructed lines and walls so the pigment had to run in certain geometric shapes and directions. The rest were free clouds of pigment.  Making nature part of the process is the best thing I could have done. You can never plan or recreate those moments.

I didn’t know that I could mix these newer pictures with the Polaroids I produced in the past.  So, when I had this idea of Diptych, I thought maybe I could include both because, somehow, they mixed and matched.  Even after such a long time, the Polaroids that I did 45 years ago, and the landscapes I did, maybe, four years ago – they shared the same ingredients: the colour, the quality, the cut.  They were linked.  The combination mixed the past, with the present, and why not the future?  The work was going to take a long time to develop. 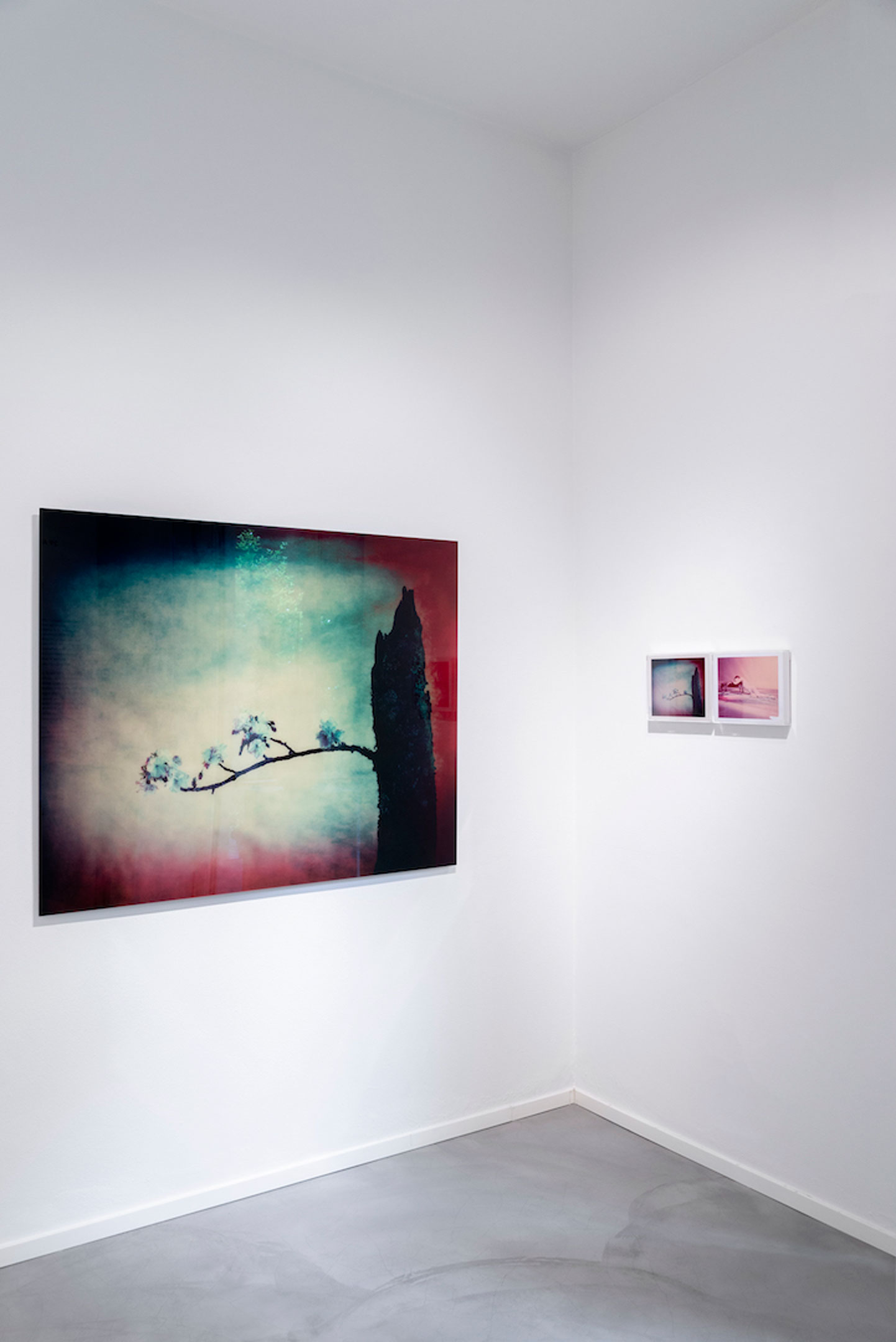 Sorcha: Can you explain your history with Polaroid and how it became a part of your unique process?

Toni: The Polaroid system is like photography from the start of the last century.  It’s this big camera, it fits the 10-by-8-inch Polaroids, and you have a big black piece of cloth over your head.  Inside the camera is a reflex mirror. So up is down and the left is right.  It’s quite a difficult thing to control.  But everything I shot on Polaroid was done in the studio, so I had maximum control.  The Polaroid allows several shots, but you can’t do more than five or six. The models get bored.

Fashion photographers shoot a lot and it’s active and keeps moving.  In my work, the models couldn’t move much. Their heads became statues, like sculpture work, and then they would have to give life to that marble.  It was hard for them, but there were beautiful results. 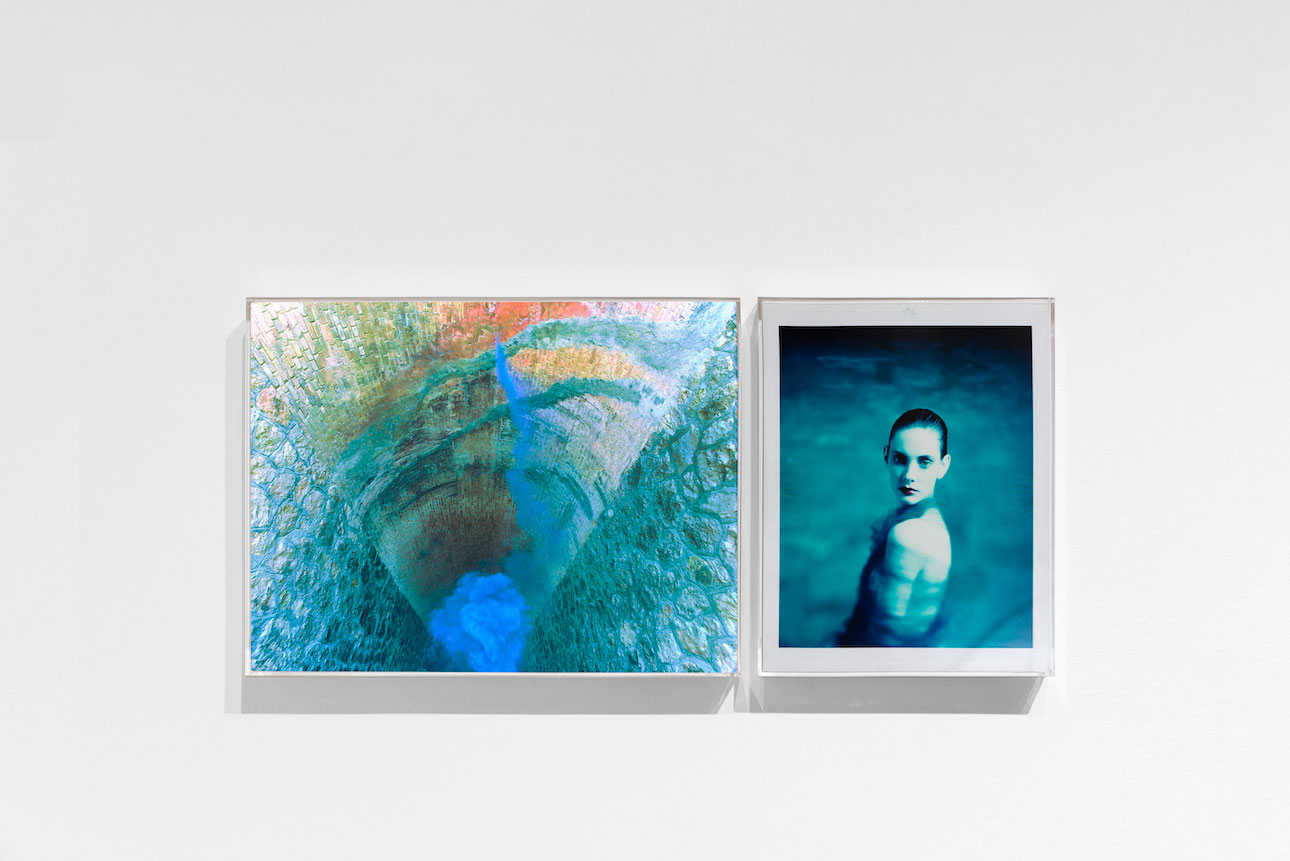 Sorcha: This idea of “cause and effect” and of being in the moment as much as an artist or model can be, the two processes you’ve mentioned are linked by that.  Spontaneity is the word that comes to mind.

Toni: A combination of those two elements: “spontaneity” and “effect”, together.  The frozen system of the Polaroid means the model must be still and must activate themselves in the moment that I’m shooting.  When I’m not under the cloth, my face is out.  It’s just my face and their face, communicating with our eyes.  Immediately, you see my face connecting to them, trying to reach the sort of element that I want.  And, maybe they don’t know exactly what it is, but when they see the result… the result is there. 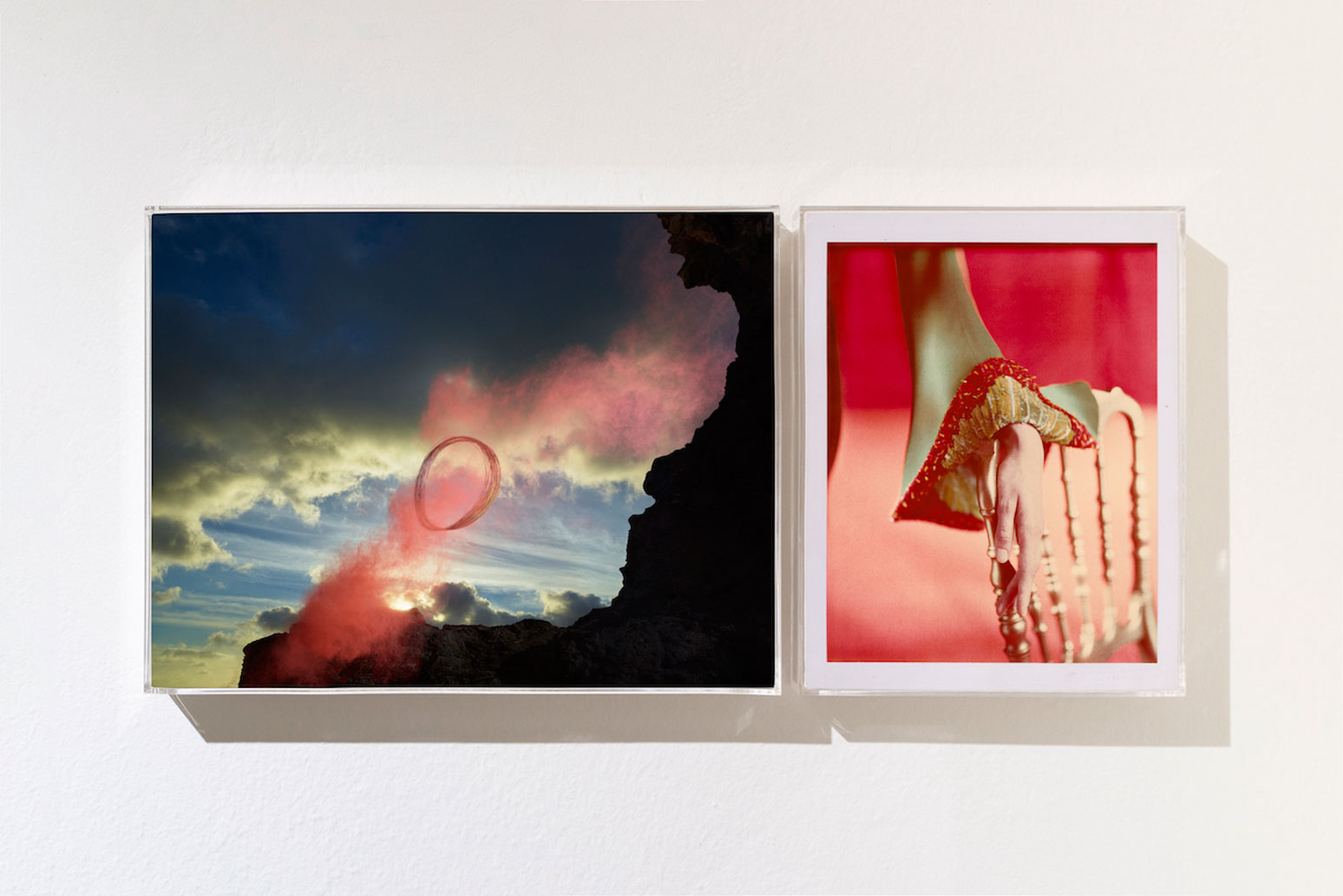 Sorcha: I’m intrigued by your decision to revisit your previously published Polaroids.  How did you decide which ones to return to?

Toni: I chose the Polaroids in combinations and pairs. The diptych is either two Polaroids running together, or one Polaroid and one digital.  So, the combination was largely already there.

Let’s say I shot a face and then shot that same person’s body, both are part of the same story.  I combined “Polaroid A: The Face” with “Polaroid B: The Naked Body of the same person.”  Then I matched single Polaroids that could travel with a landscape picture according to their pathos, light, colour and movement.  A connection is suggested between those two pictures. You have to choose an element that links them together; that works with the Polaroid format.  The two colours I chose – my way of seeing – were blue and red.  And when I went to a location, there was always blue and red again – our pigments. 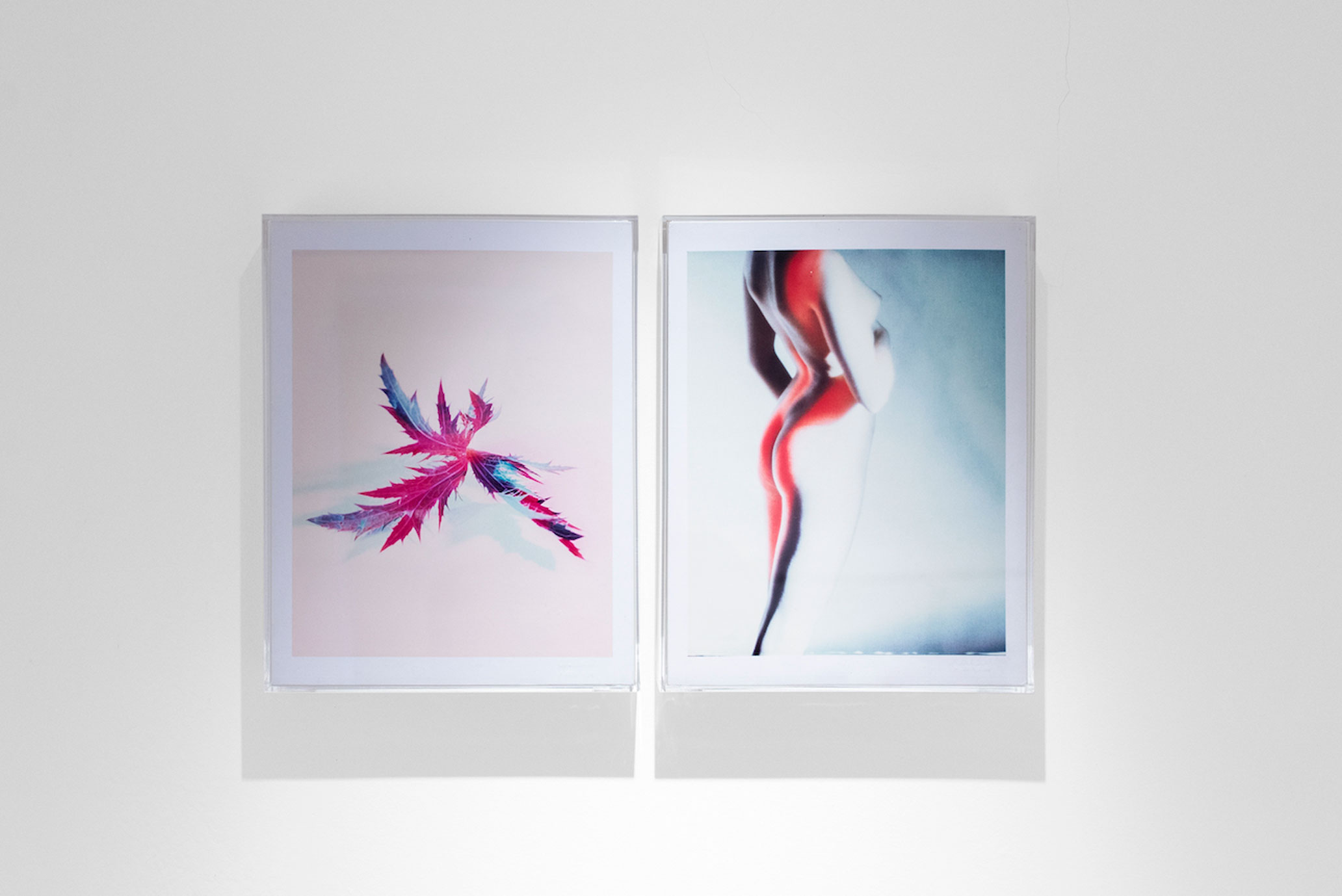 Sorcha: I’m also interested in your relationship with the diptych and historic Italian religious iconography. In contemporary society, diptychs are regularly just two images side-by-side, but your work evokes a canonical sense of ethereal devotion.

Toni: Yes, because I kept myself in the sequence of the process.  It was a continuation of my roots – those main colours: blue and red.  The ethereal aspect was the landscape.  As for my process, I never desired a strong impact. I’ve always had a light touch and I don’t want extreme solutions.

The girls that I chose to photograph were not physically showcasing that kind of femininity, they were more theatrical.  They did not represent that aggressive pathos most fashion pictures have.  I try to get less of that focal point because I want more of the soul in the material.  I was catching not the individual, but the spiritual.

Sorcha: The diptychs do feel exceptionally spiritual, yet primordial.  How did you manage to merge the digital and Polaroid palettes?

Toni: For some of the Polaroid pictures I took in the past, there were always two.  Their own diptych.  One was done in a regular way – the portrait.  And then I shot it on a Polaroid that was transparent – on acetate.  There were two elements again: Polaroid on paper and Polaroid on transparent acetate.  Then mix them.  The background might not exist on the real Polaroid, I might shoot it after.

I have my red and blue pigments in the landscape.  But on Polaroid, they came from using extra film.  And on it, the nuance of red and blue overlap and reverse.  Then I like to include movement when I shoot, like pieces of metal that fly and vibrate.  I don’t want to be so static.  Something has to move, like an electric shock.  Something has to happen.

I like to think of Michelangelo’s Rondanini Pietà.  At a certain point, Michelangelo took a hammer and smashed a piece of the statue and he cried, “talk to me!”  He was so alive, and he got so upset that the sculpture was not.  It didn’t speak to him. So, he smashed and smashed into the marble with a hammer.  That’s the story, so they say. 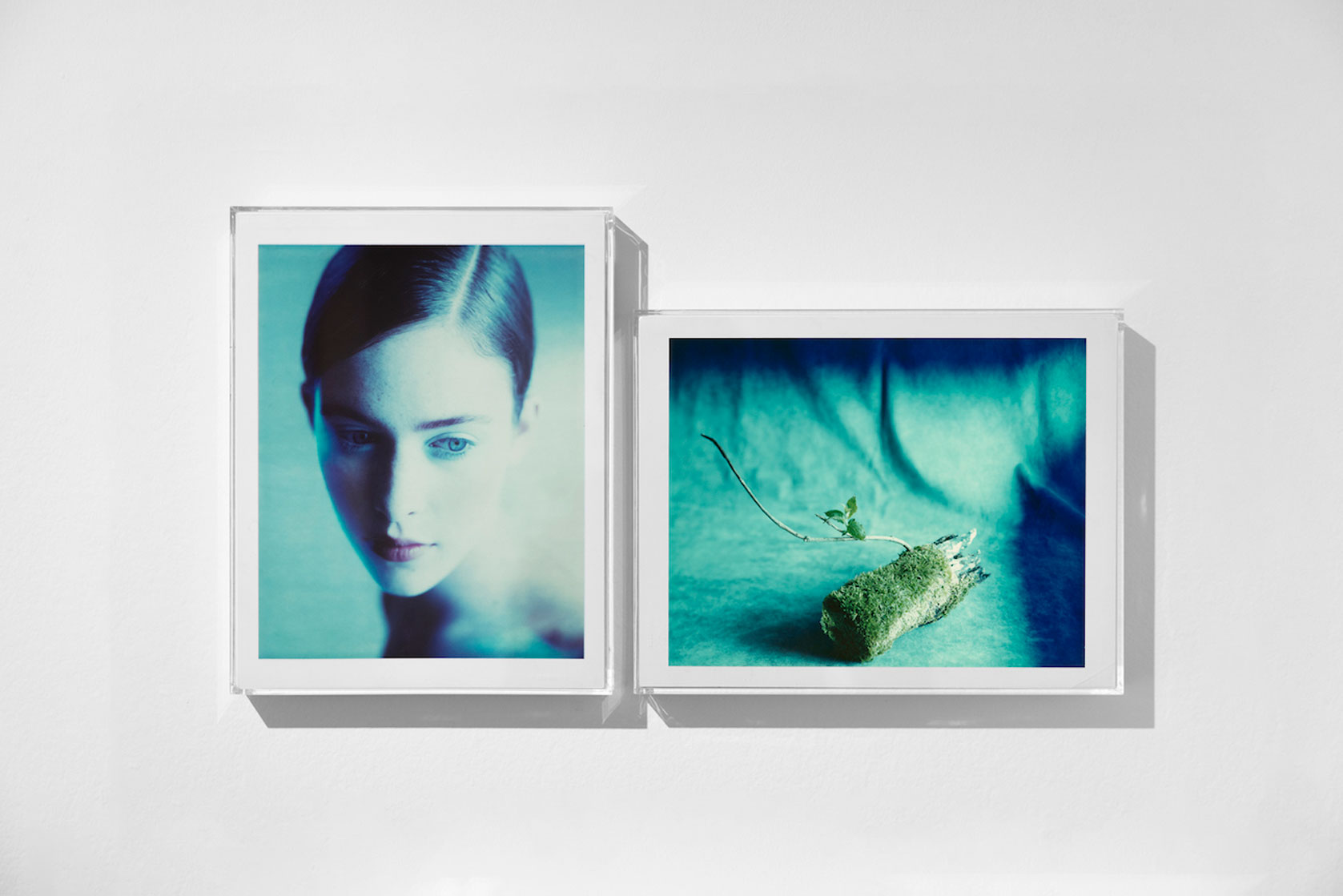 Sorcha: Your explorations in human existence and belief can be seen throughout your past photographic series.

Toni: At a certain point, when I stopped doing fashion, I decided to be more independent.  I was independent in fashion, but you follow the seasons, the model.  You participate in the event.  You have to be there, you know?  So, I decided to go and take pictures of painted cows in India [divine bovine’].  It was a rural place.  I would eat and sleep with the local people. I was not in a big hotel in the city.  I was not with a fancy model, makeup artist, hairdresser, and stylist.  I was on my own.  The connection between me and the people was much stronger. You become part of the project.  You have a strong connection with them.  You become part of the family. 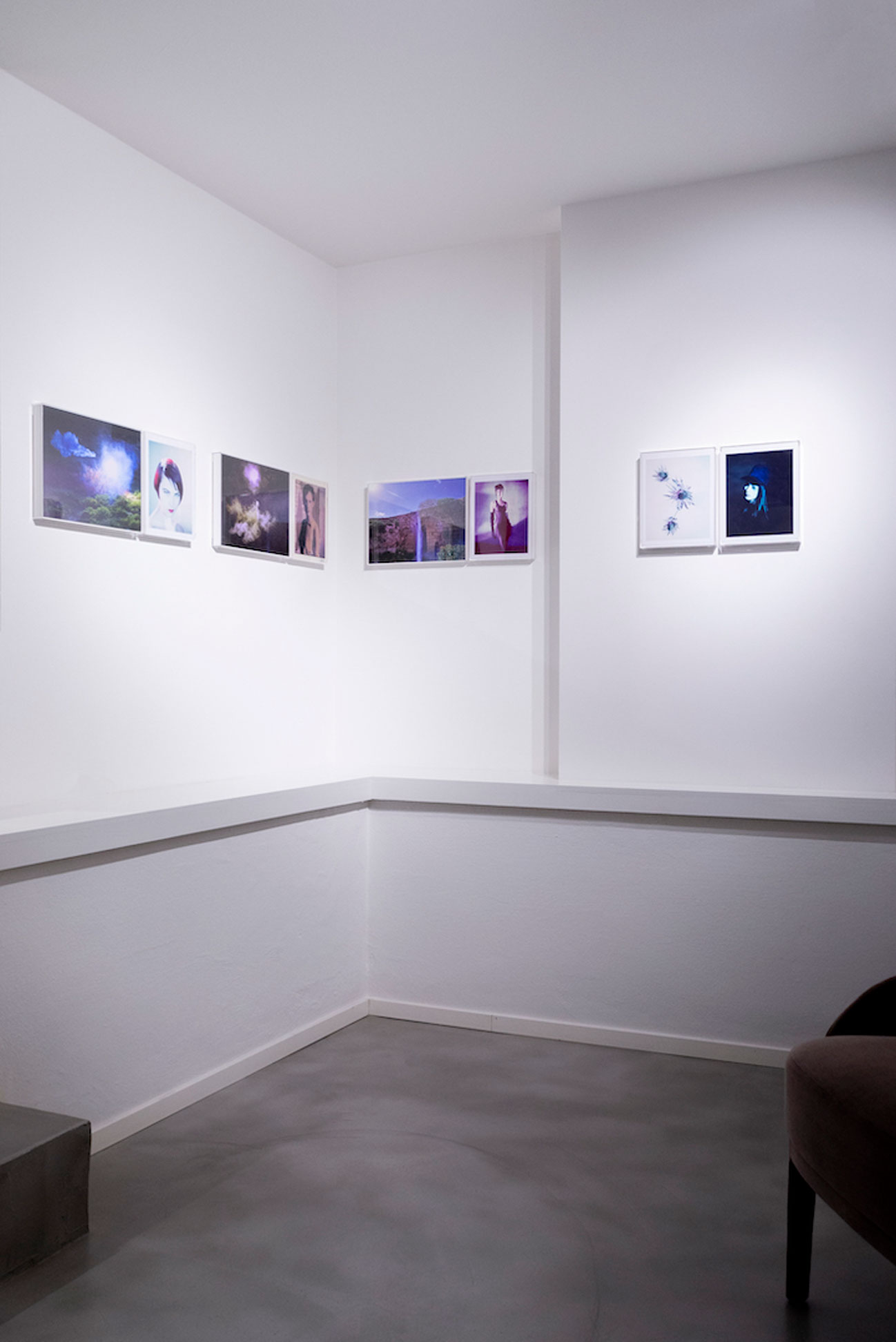 Sorcha: A movement away from materialism and the status of the industry at large.  Now you opened your exhibition at the very start of Milan Fashion Week.  How does it feel?

Toni: With fashion and Milano, I’m not very attached anymore.  Not like I used to be.  When I left fashion, I discovered something that moved me differently.  I go to the shows on occasion.  But it’s different and I appreciate everything.  Everybody that I knew at the time – Issey Miyake (a wonderful guy), Comme des Garçons, Yohji Yamamoto, Gianfranco Ferrè – were generous people.  When they approached me, there was an exchange of generosity.  It was a great time, but things moved and I allowed myself to move with them.

Now, I am pushed to look at the landscape.  Of course, if someone calls to say “come and shoot” or “hey, I want to do fashion in nature with pigments,” it’s all welcome.  But, for me, freedom is the important thing, not profit.  You must get what you really want and work from your own emotion.  If you are focused on profit, you are half-material and half-spirit, maybe 80% material and 20% spirit.  You can sense that with Diptych, we are focusing 100% on spirit. 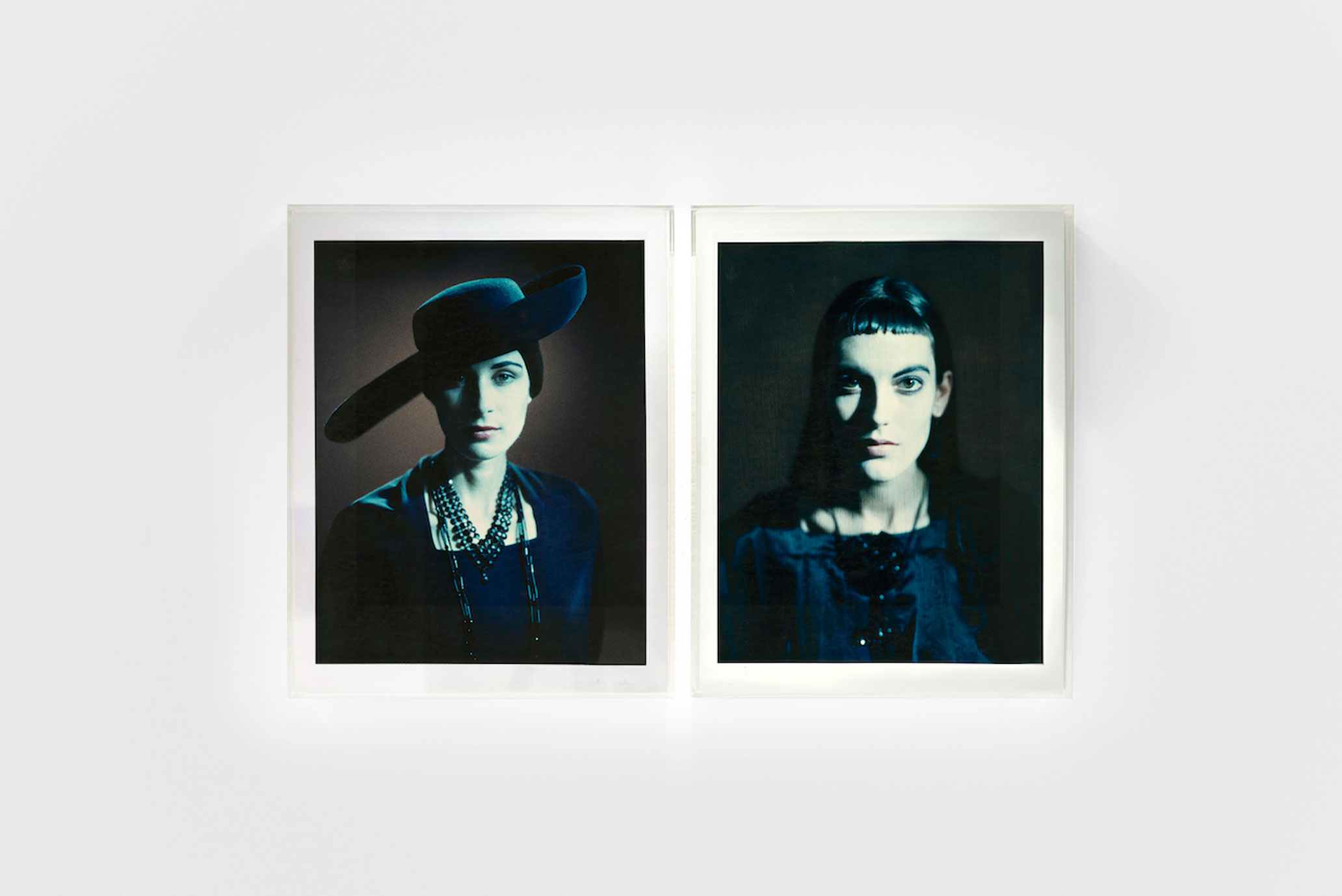 Sorcha: And finally, what artistic content are you consuming at the moment?  What’s making you happy?

Toni: Recently, I bought A Bigger Picture by David Hockney.  It explores digital processes and painting for people that know the alphabet of art, so they can be pushed to work differently.  He worked on Polaroid too.  Mainly, it’s his concepts that intrigue me.  Like Miyake, he says a lot of things with great generosity.  He gives something that belongs to his quality of work. That’s important. 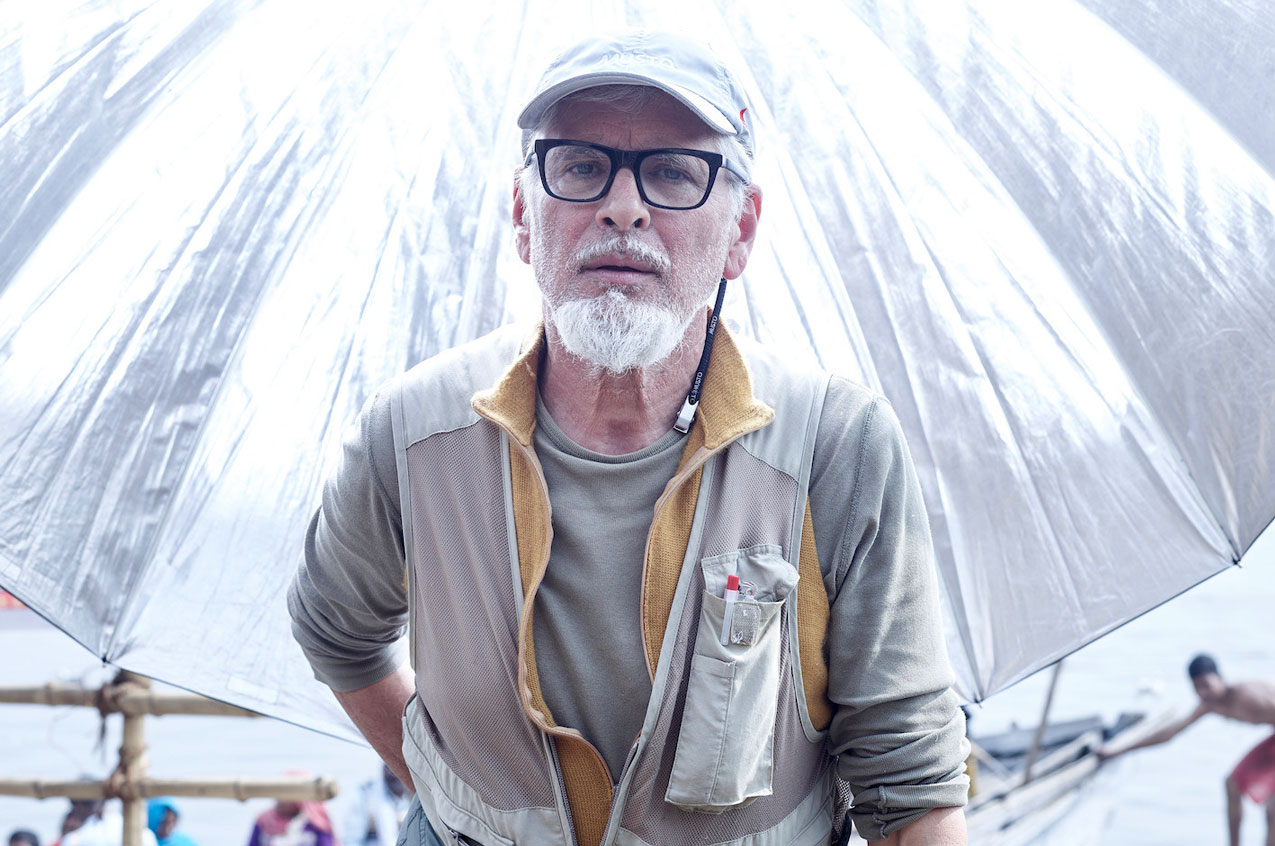 The solo show by Toni Meneguzzo, Diptych, opened on September 20th 2022 and is now on show at 29 ARTS IN PROGRESS, Via San Vittore, Milan, until November 12th.

The companion book, Diptych, is available now in a limited print run of 200 copies. Published by L’Artistic Aditrice.