Ten years after she was appointed CEO of the British Fashion Council, Caroline Rush celebrates her anniversary by showing just how far we've come since 2009. All images courtesy of the BFC.

Let’s be honest.  There was a time when London Fashion Week, the British Fashion Awards and British fashion in general were seen more as the plucky triers from the Championship trying their best to be promoted to the Premier League each season but never quite making it.  There were always the exceptions, of course – no-one was ever going to hold down Vivienne Westwood, no matter what, Amen.  And designers like John Galliano, Katherine Hamnett and Pam Hogg were far too punk to ever let establishment reticence be an obstacle to what they wanted to achieve.  But the UK, and London in particular, just never held the same kind of glamour or financial clout that Milan and Paris did, despite the talent being just as good.  The major designers didn’t really show here – not even the British ones – and there was no real business or media infrastructure to enable the minor ones to properly take advantage of their absence. 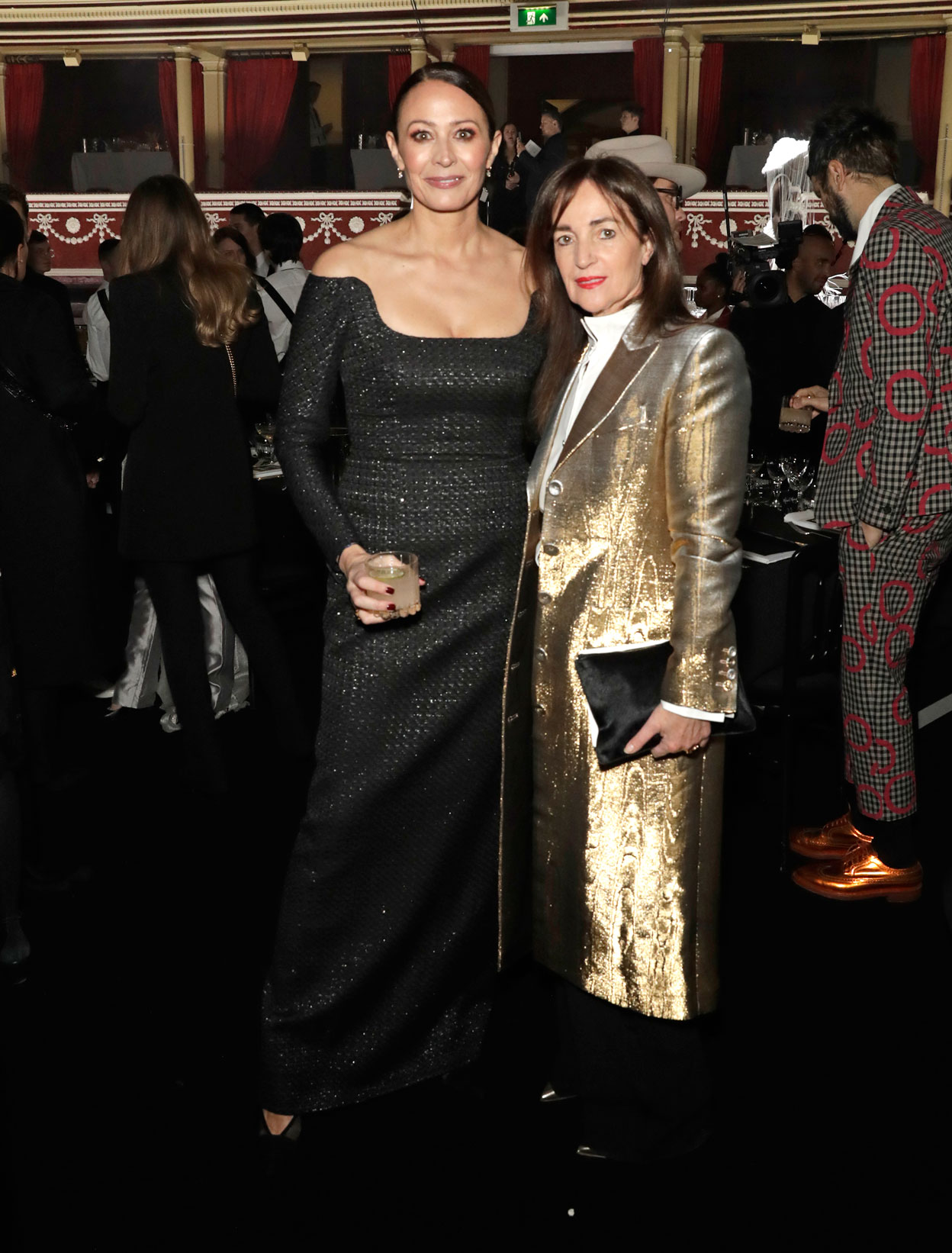 Enter Caroline Rush in 2009.  From a background in fashion PR, Rush was appointed CEO of the British Fashion Council after several years of working with them through her own company, Crush Communications, in an effort to raise the profile of the British fashion industry – and particularly London Fashion Week (which at that time was little more than an informal weekend gathering) – not only to the rest of the world, but also to Britain.  To carry the football analogy through, not even the home supporters cared that much about their own team.  There was a (long) period when the only time Britain heard about British fashion was through the yeomen’s work done by fashion journalist’s like Caryn Franklin, on her once-a-week, 30-minute vehicle The Clothes Show on the BBC.  Yet fashion has always been one of the UK’s biggest industries.  Today it’s now worth around £26 Billion to the UK economy while employing almost 1 million people. 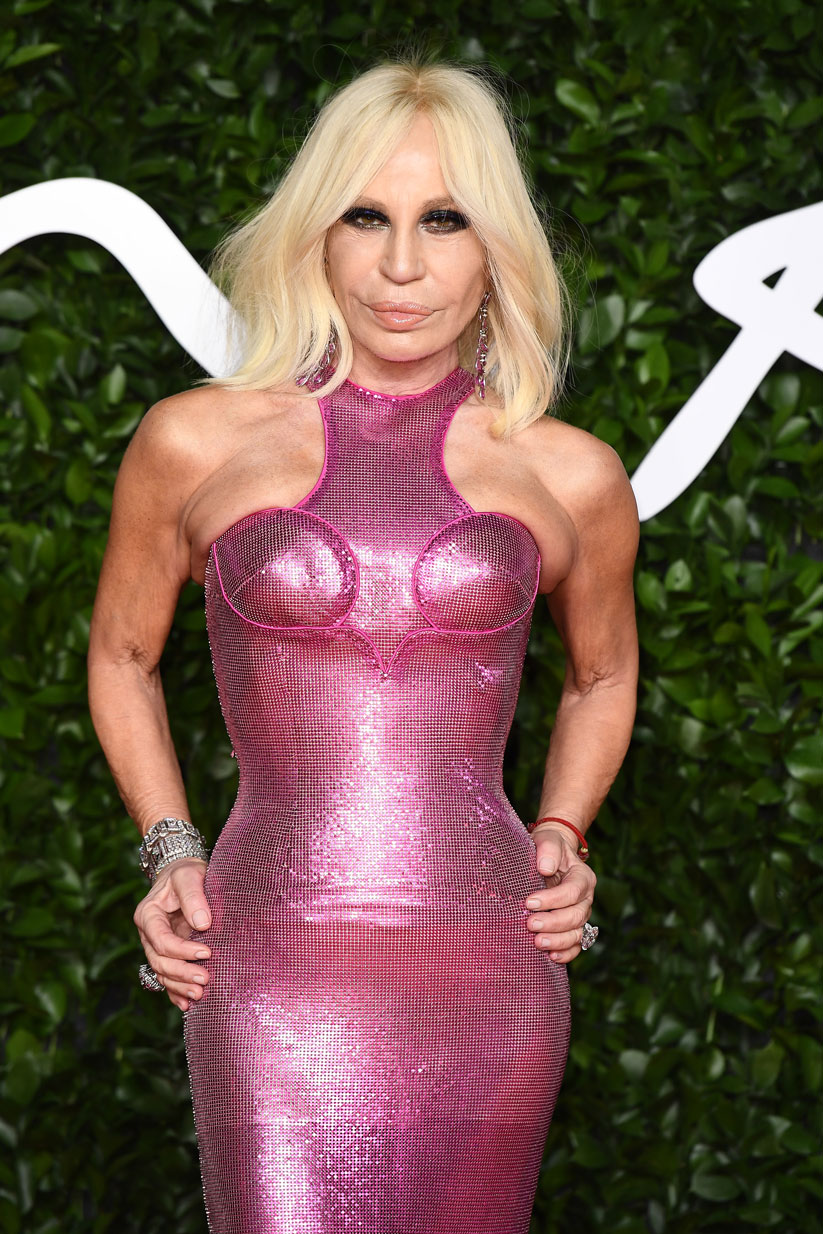 That’s the kind of gap that smart people with foresight can be very successful (in both senses) at closing.  Caroline Rush celebrated her ten-year anniversary at the forefront of British fashion on Monday night with her tenth annual British Fashion Awards ceremony.  As a testament to just how much she has taken things forward and transformed the perception of Britain’s contribution to global luxury fashion during her tenure, you’d actually be surprised – maybe even a little offended – if people like Giorgio Armani, A$ap Rocky, Julia Roberts, Kate Blanchett, Donatella Versace and, randomly, Tom Cruise didn’t show up on the red carpet.  And that’s just to name a very, very few. 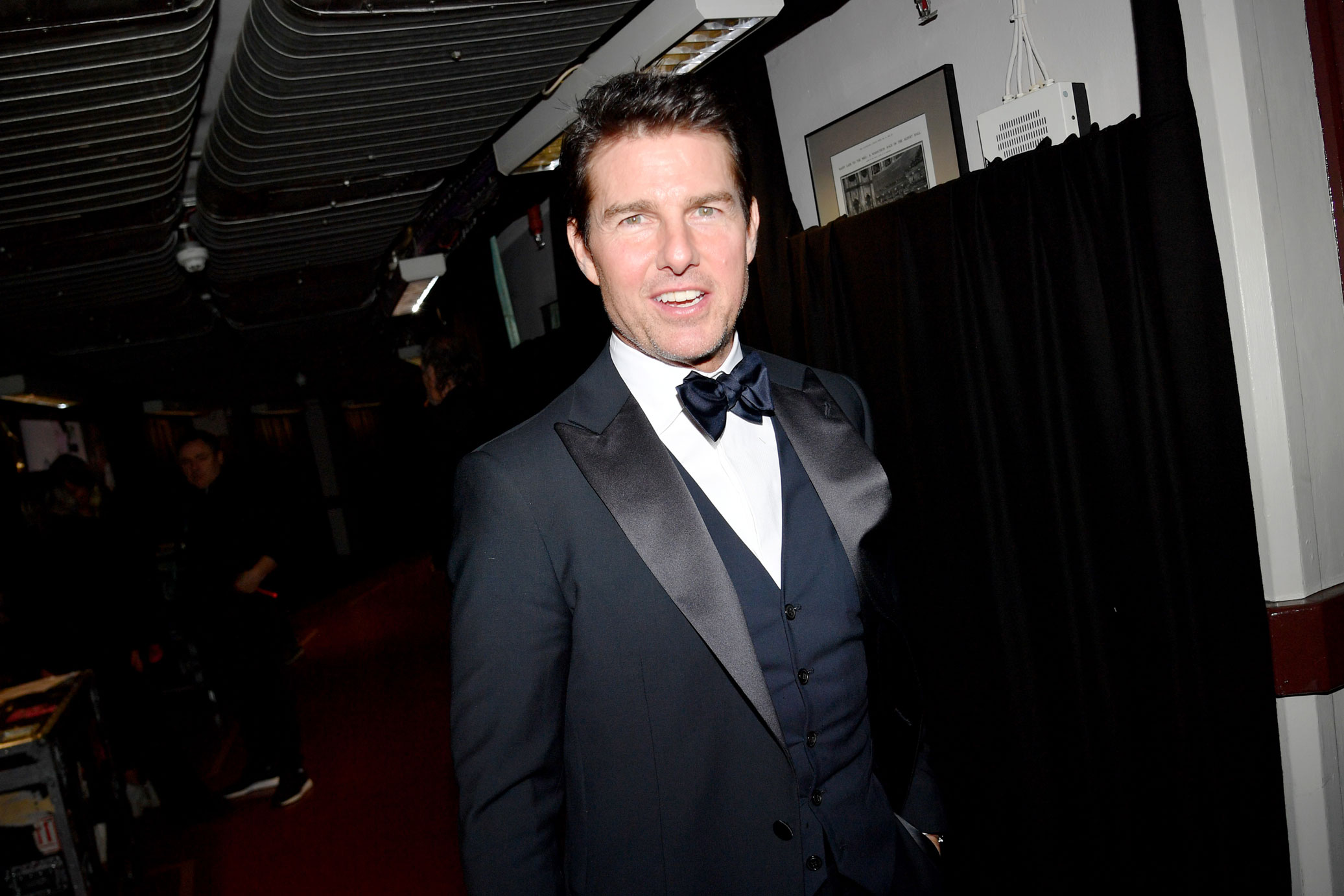 There are two sides to this coin, however.  The glamour brings the attention but it’s the recognition that brings the respect and, in turn, the business.  It’s also not just about celebrating British – it’s about putting Britain in a legitimate position to also be able to endorse the biggest names in luxury fashion from around the world.  We’re now in a position to offer a ‘seal of approval’ and have it be taken seriously on the fashion world stage.  That elevation of stature can only be down to the leadership of one woman.  And, on Monday night at the Royal Albert Hall, the names and faces to benefit from that elevation at the 2019 British Fashion Awards were: 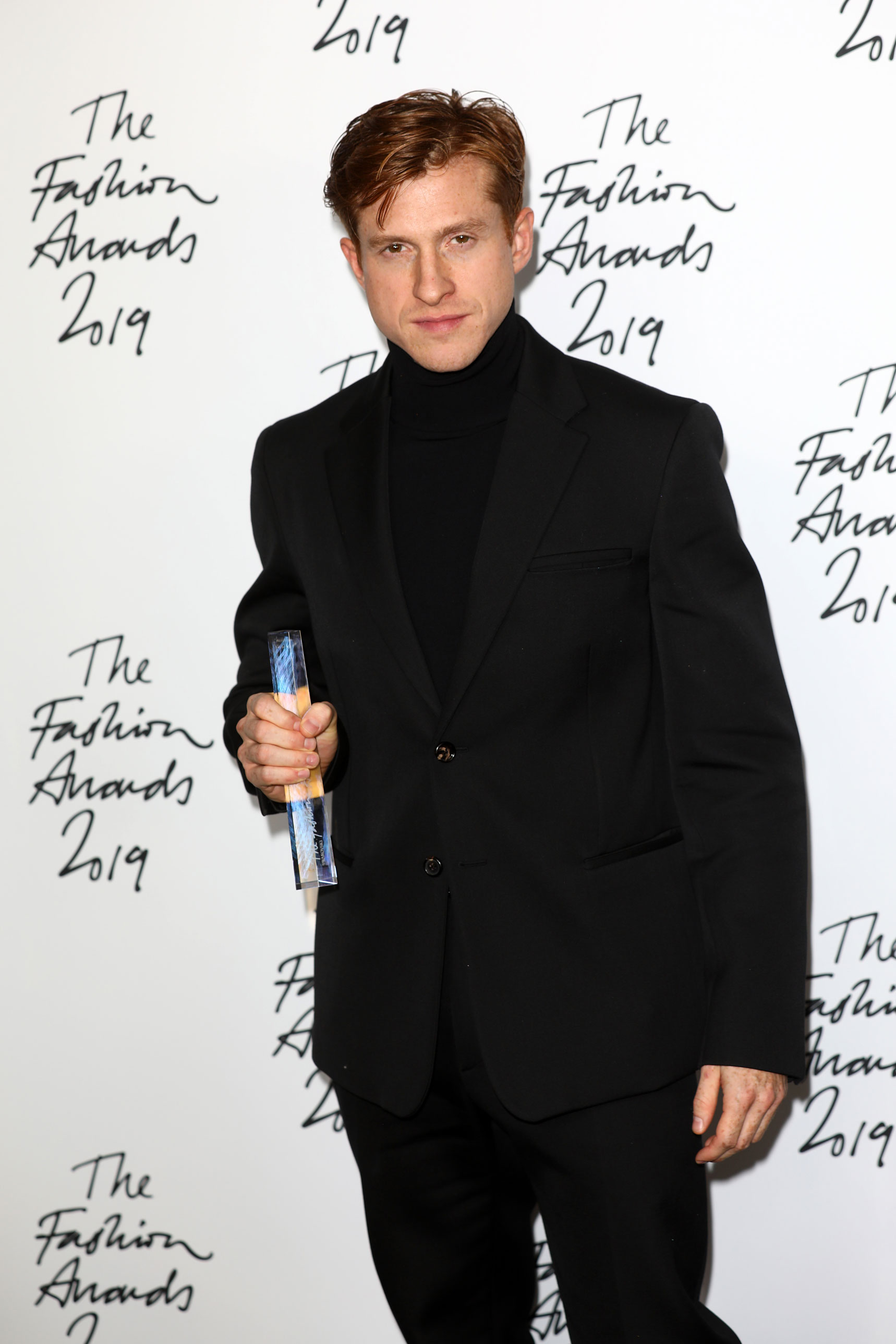 Kim Jones has effectively taken Dior menswear by the scruff of its neck and made it his own since being appointed menswear creative director little more than 18 months ago.  And the work never stops as he was in Miami on the night of the awards working on the next big Dior project, despite being named British Designer of the Year for Menswear.  Image by Nikolai Von Bismarck. 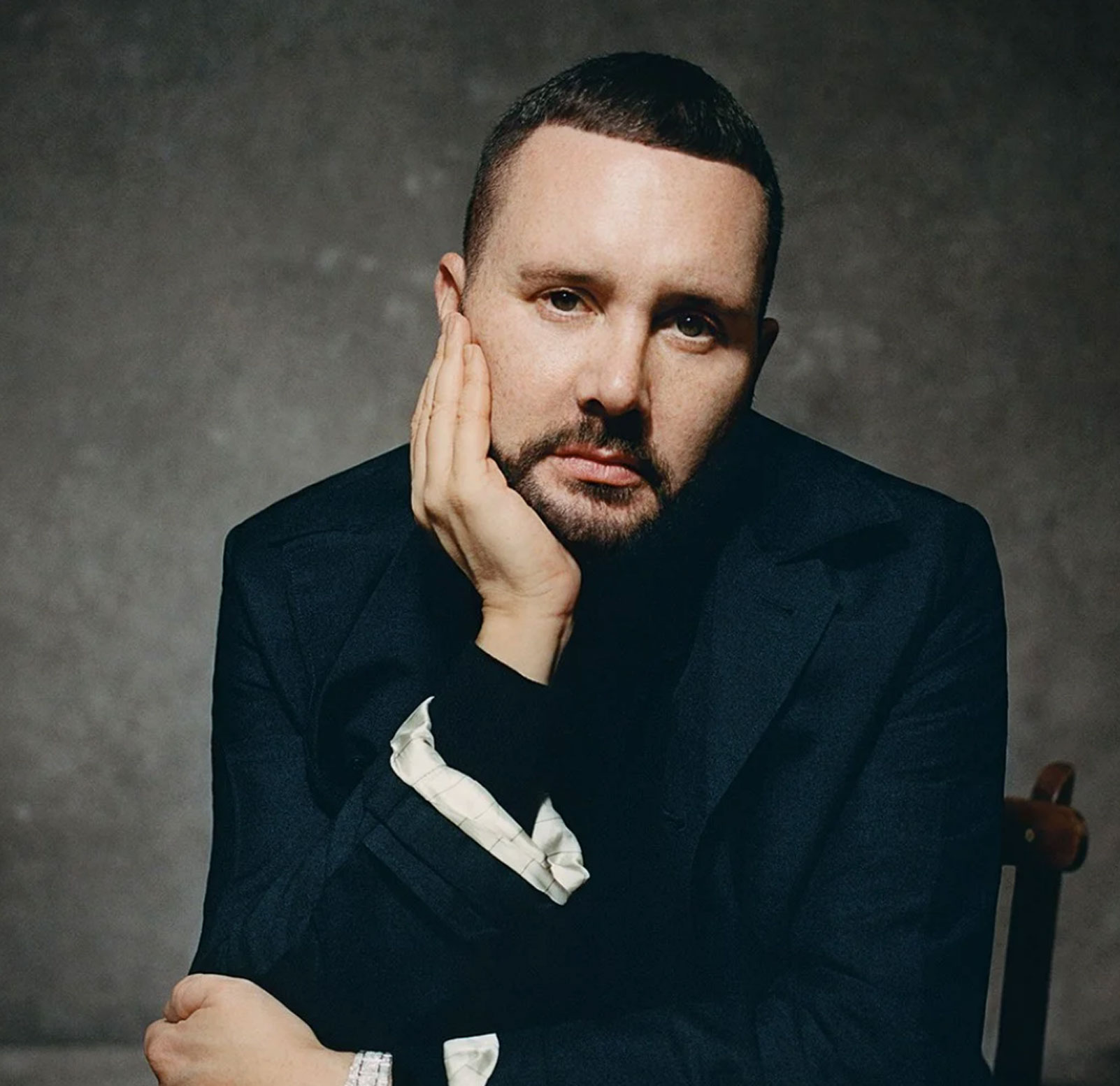 London College of Fashion graduate Bethany Williams was the recipient of the Emerging Talent for Menswear award, a mere two years after founding her eponymous label using things like book waste and second-hand denim to create her collection. 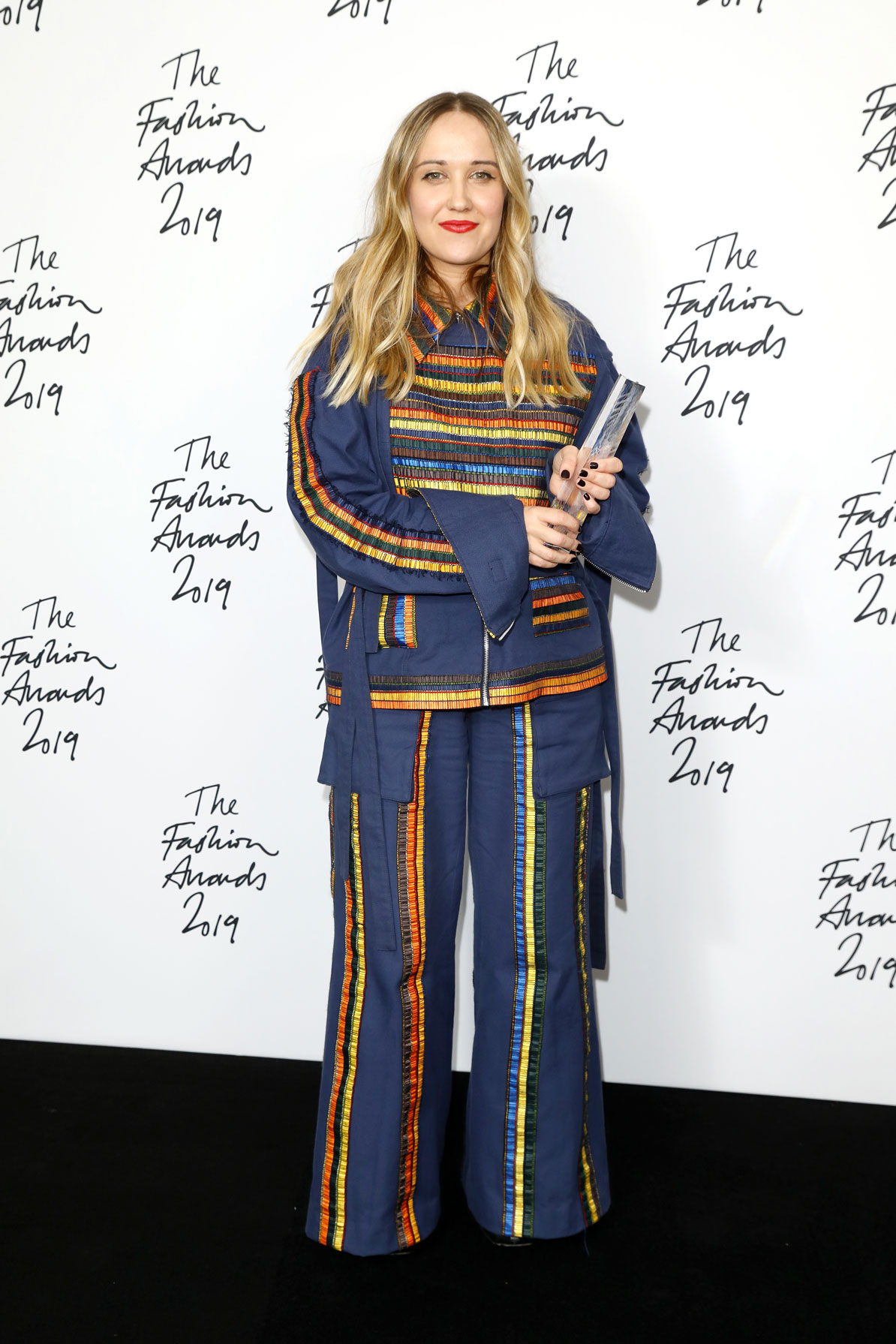 South Korean born Rejina Pyo continued the Oxford/Cambridge type rivalry by picking up the Emerging Talent in Womenswear award as a Central St Martin’s alum one year after having her first ever catwalk show at London Fashion Week.  THE FALL highlighted her S/S2020 show in our round-up here. 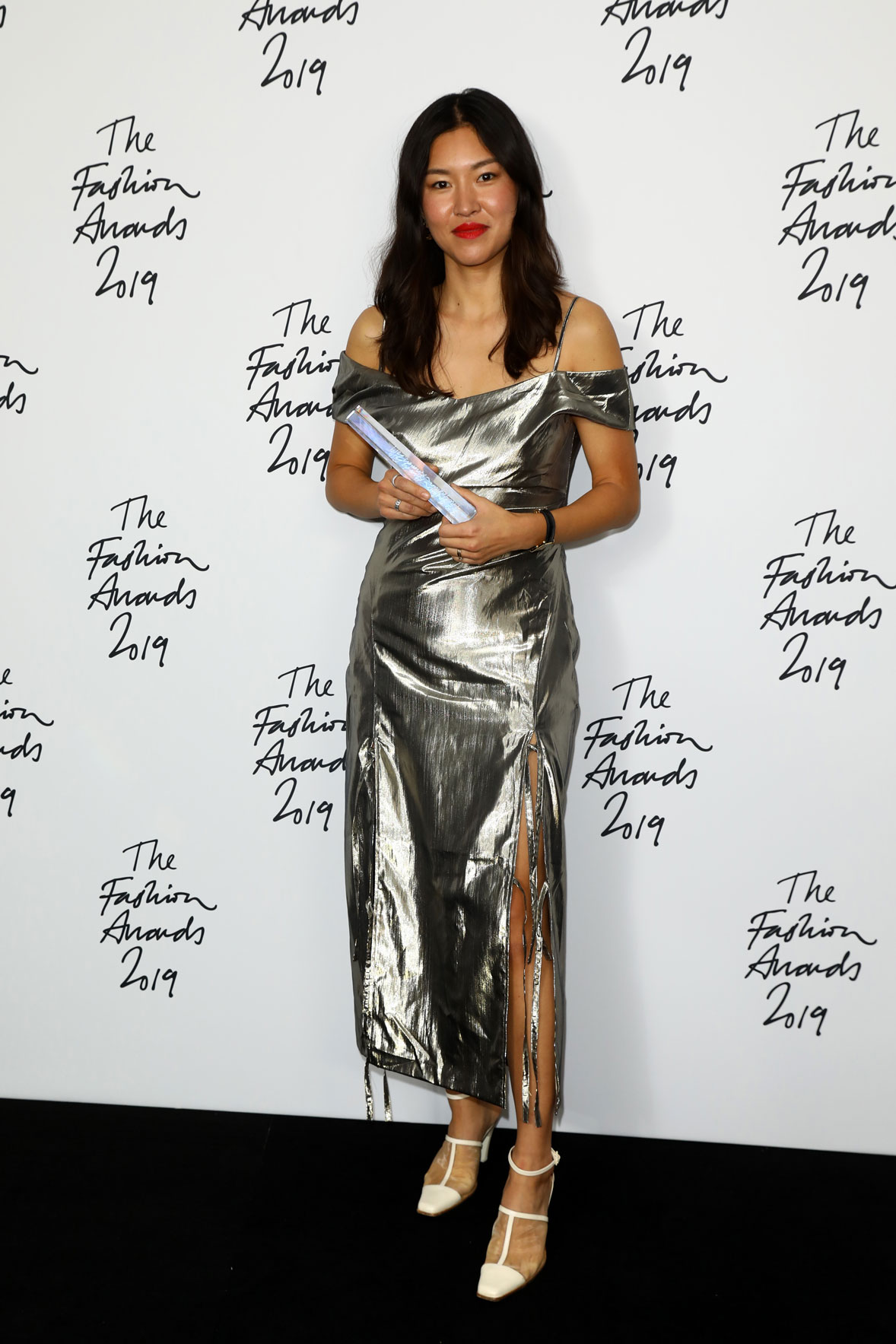 Sudanese-Australian model Adut Akech carried the baton passed to her by models like Alek Wek and Naomi Campbell before her by picking up the coveted Model of the Year award for the first time. 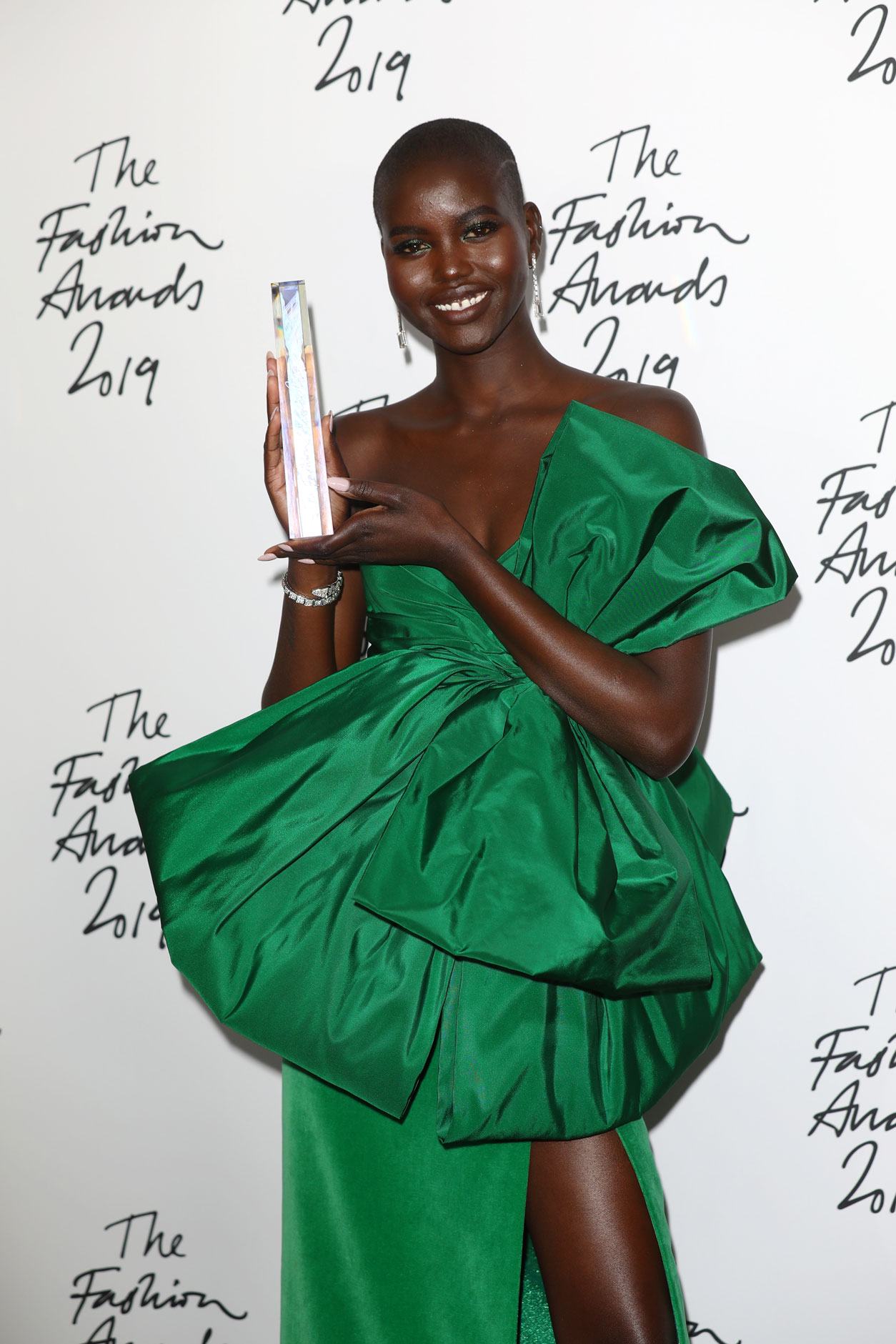 Of course, if you’re going to recognise the new class then you have to pay respects to the previous.  Naomi Campbell herself picked up the night’s Fashion Icon award – seen here with the recipient of the night’s Trailblazer award, Alexander McQueen’s Sarah Burton, and Sir Jony Ive, Chief Design Officer at Apple. 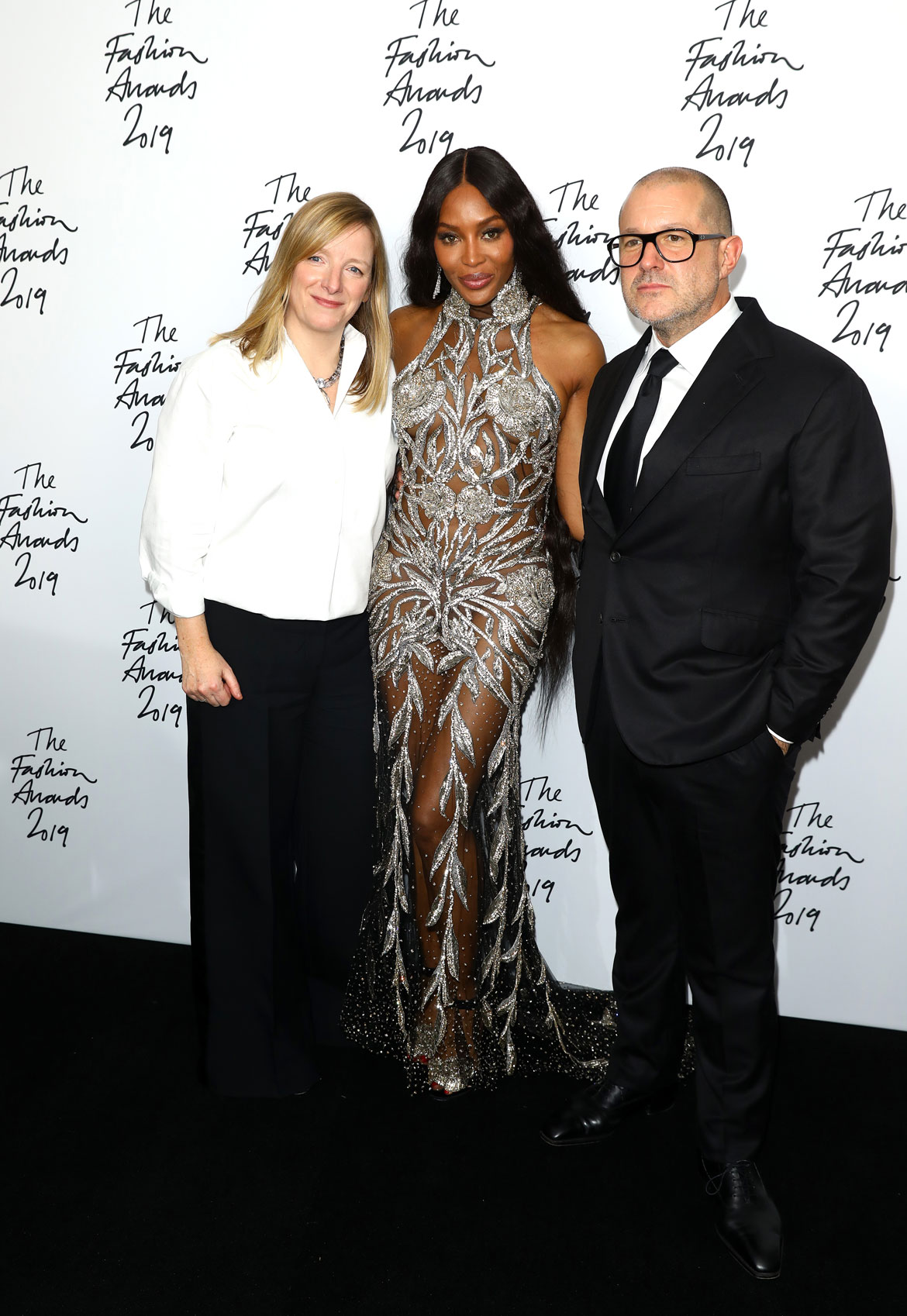 If you’re going to give an Outstanding Achievement award to anyone you’re probably wise to give it to someone who has dressed Hollywood for, literally, decades.  Someone like Giorgio Armani – seen here arriving with his ‘bodyguards’, Cate Blanchett and Julia Roberts. 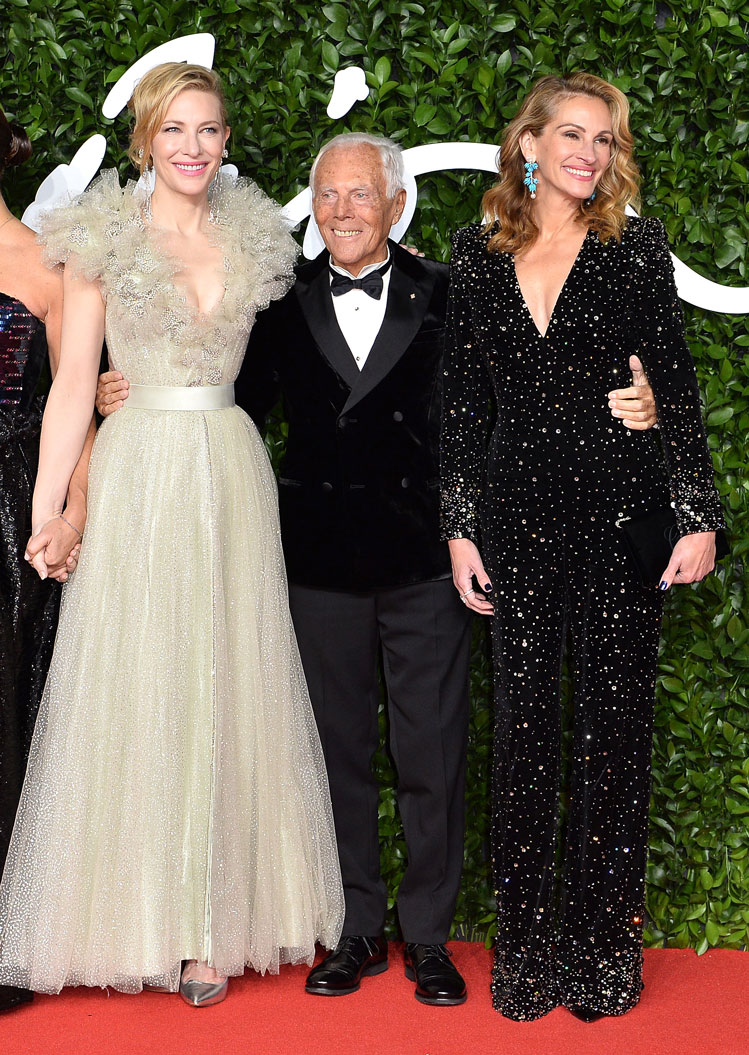 2019 saw the first year the Designer’s Designer award was presented to “recognise creativity through product design, campaigns and collaborations that are built upon a firm business foundation”.  Congratulations on being the inaugural winner, Christopher Kane. 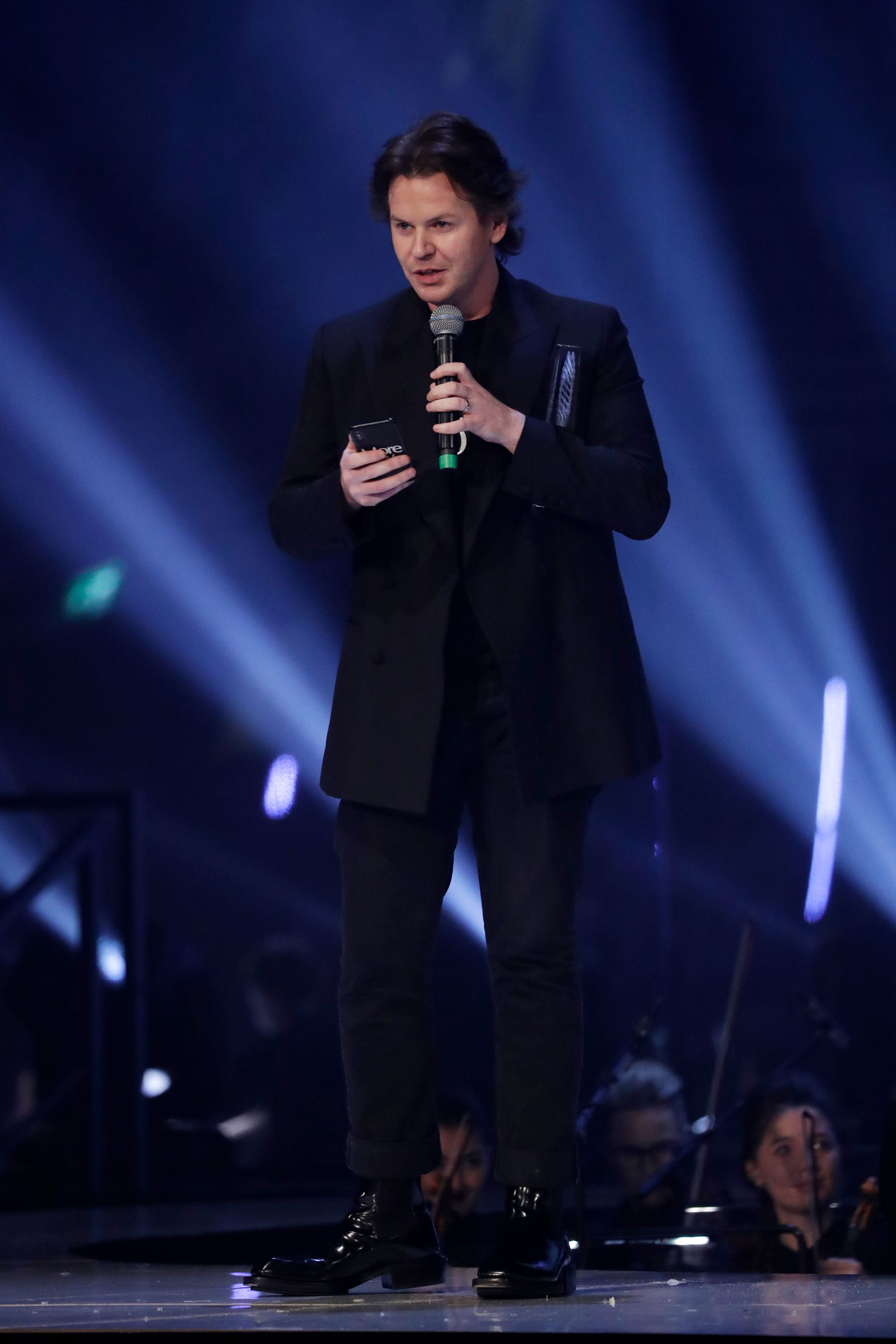 The Urban Luxe award is basically self-explanatory.  But if you’re still having problems figuring it out, everything should become clear when you learn that this year’s winner was Rihanna’s Fenty label. 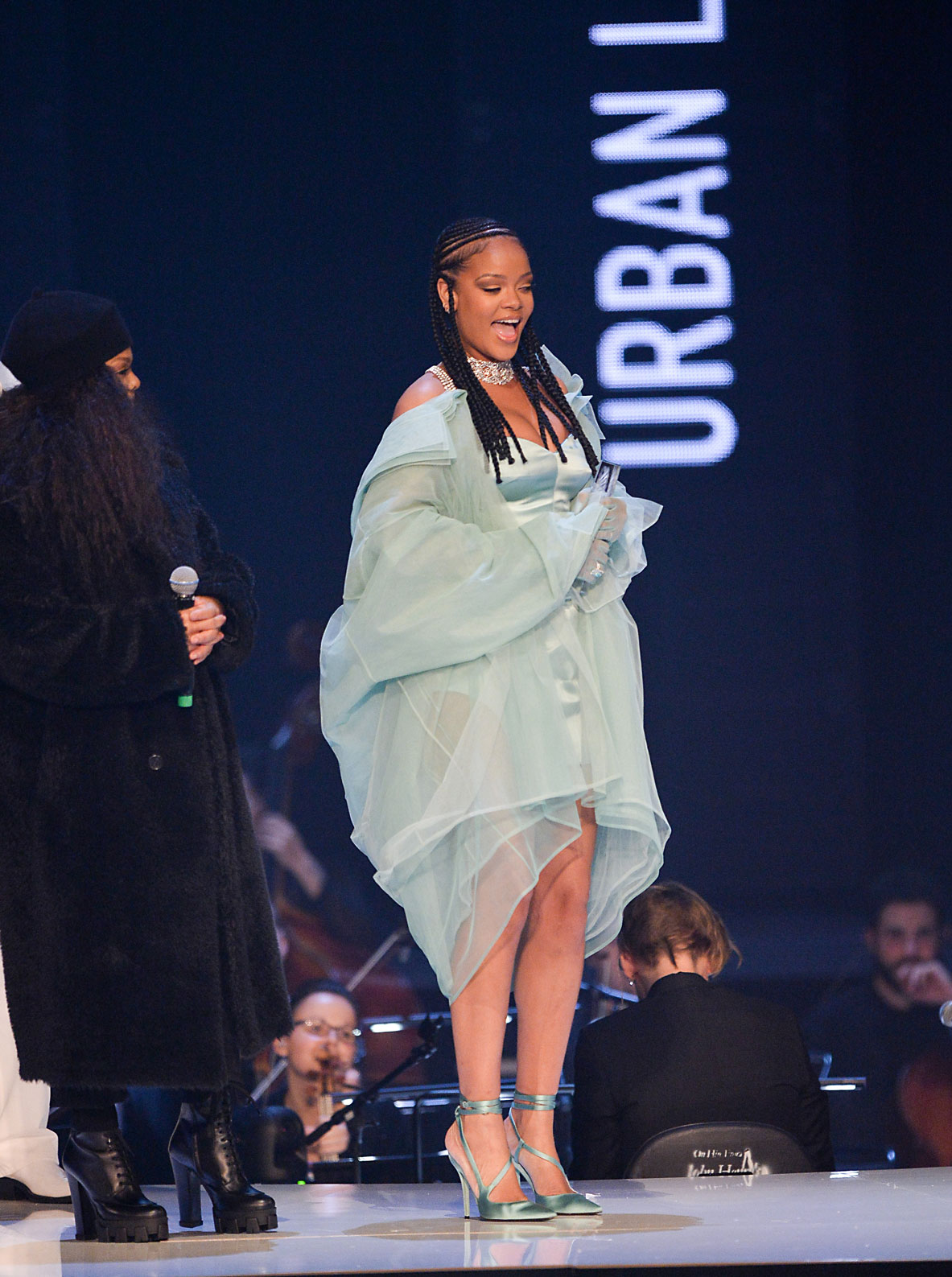 Legendary hairstylist Sam McKnight received the Isabella Blow Award for Fashion Creator (from Daenerys Targaryan herself, Emilia Clarke) for his work creating some of the most iconic looks in fashion and entertainment over his many decades in the business. 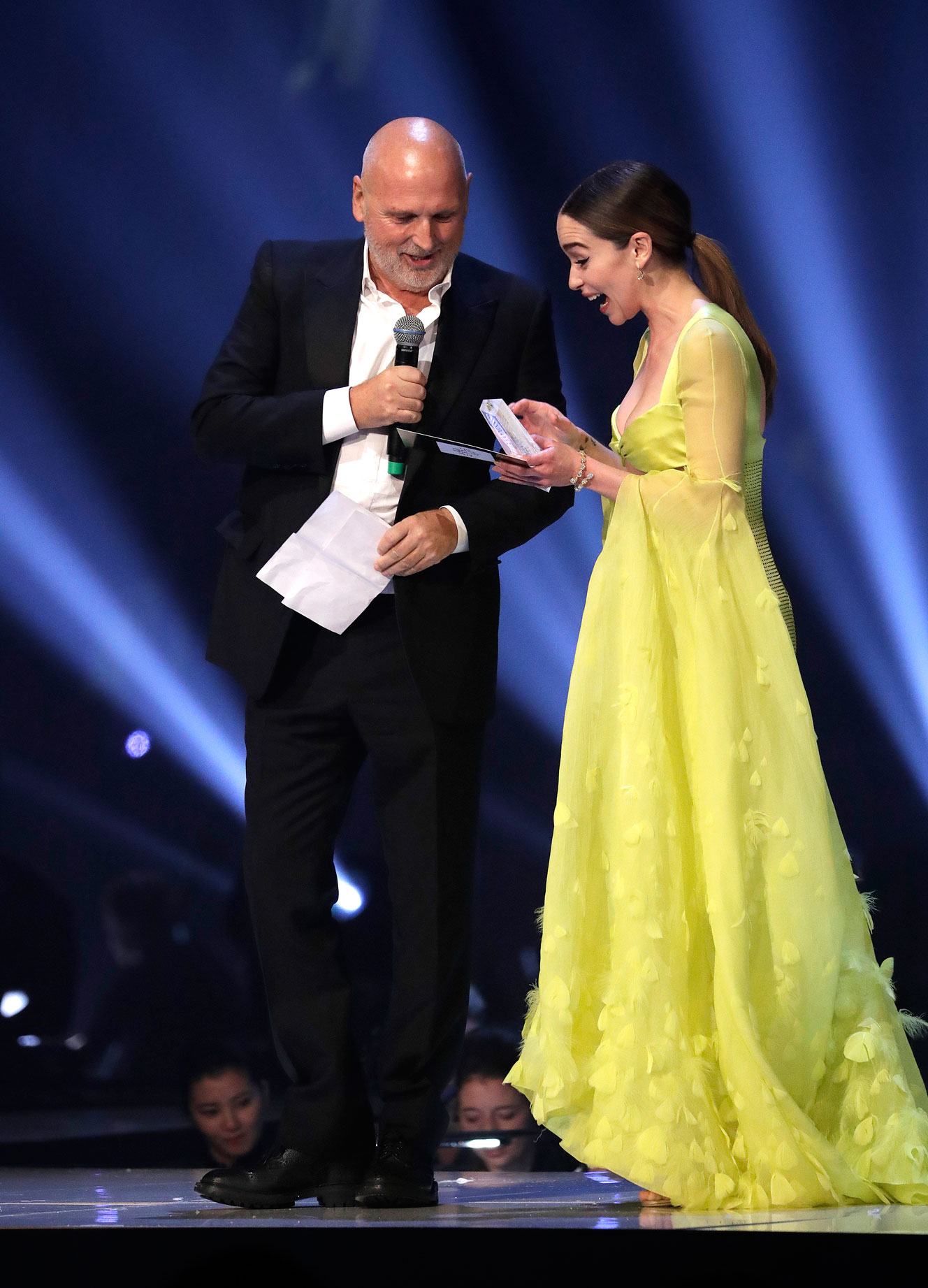 Watch the red carpet arrivals at our YouTube channel THE FALLtv