Both originally from Caracas, Venezuela, Raul Castillo and Otto Lauterbach moved to Merida, a town tucked away in the Andes, before they began to follow creative paths that eventually complemented and inspired each other’s work.  It was only a couple of years later that Otto moved to London and Raul followed his lead to pursue their respective careers – Raul as a contemporary abstract artist, and Otto as a homeware brand designer. THE FALL chats with both creatives who offer a unique and fascinating perspective on upcycling materials that have a functionalist purpose.  With Raul’s work recently having been exhibited at 45 Park Lane and ever-growing prospects for achieving international recognition, Otto’s homeware brand can now be purchased on the successful retail platform Wolf and Badger, as well as on Otto London’s own website. 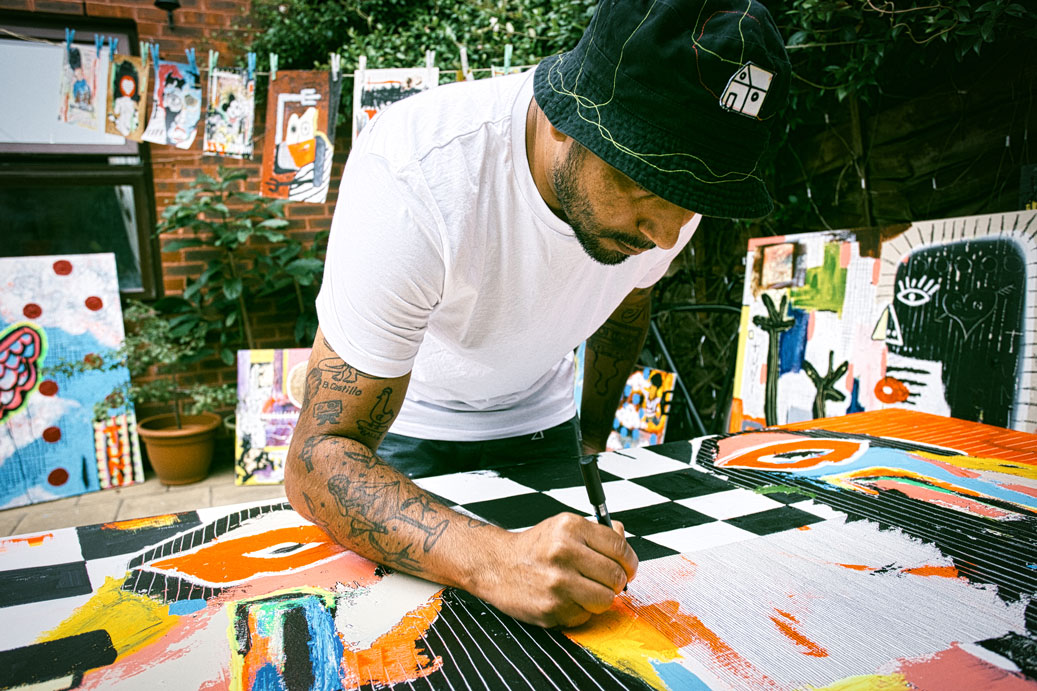 Can you tell us about how you two first met?

Raul: Well, there is an age gap between me and Otto, I’m sorry Otto… [laughing] He’s

Otto: [Otto laughs] I know he looks the oldest, but I am the oldest! [laughing]…What is the gap Raul? Six years?

Raul: Yeah, nearly six years. So yeah, I’ve always looked up to him.

Otto: He looks up to me, and I look after him. I came to London and about four or five years later Raul came to London too. We became very close when we were both in here – two family members moving to a new place definitely made us bond.  Since Raul started painting, we have become so, so close.  We’ve become so much closer because we have so much more in common now – with my art and his painting there’s so much talk about.

Raul, can you tell us about when you started painting and how it made you two closer?

Raul: Yeah. There is something I need to say first: the reason my paintings are out there today is because of Otto.  I was painting and drawing, but I was hiding it; nobody knew. My wife then showed Otto my paintings and said, “We need to get this out there!”  And, at the beginning, I wasn’t happy.  It was my personal thing and I didn’t wanna show it.  But I’m so happy that I did, super grateful for him and my wife.

Otto: I called his wife and asked to crash at theirs because I couldn’t get home.  She said of course, we were having a drink, painting, having fun.  Then she said, “Okay, Otto, I’m going to show you something, but if you tell Raul that I showed you I will kill you!  Promise me you won’t tell him Okay?” [Laughing] And, I said okay.  When she showed me Raul’s work I was speechless and mind blown.  I couldn’t believe that it.  The next day I said to Raul, “What the heck man, you have to show this to the world!”  It was a funny incident at the time, but it had to happen. 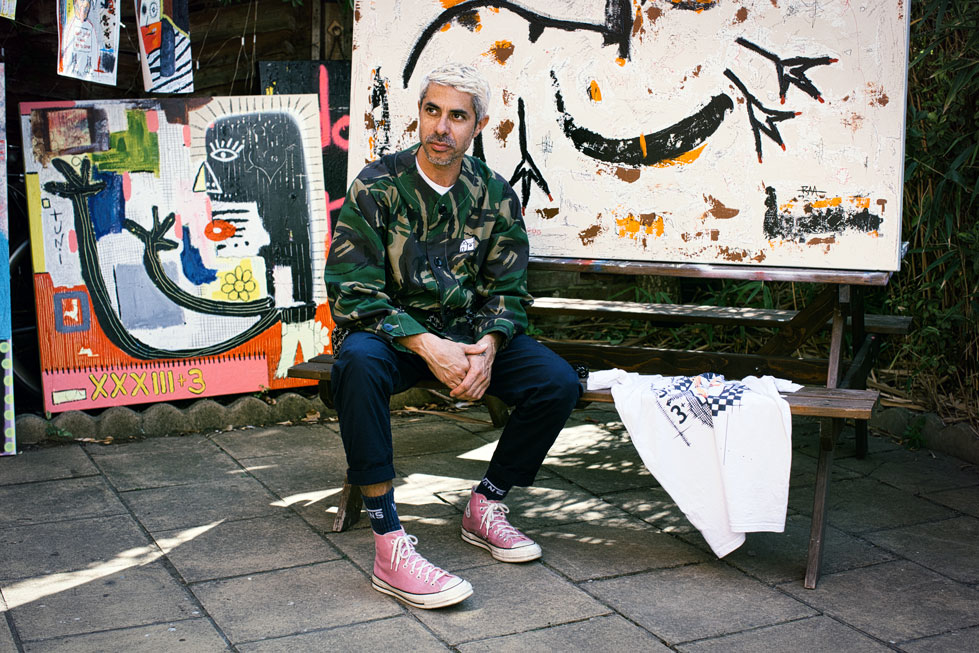 You go by the name RAA (Pronounced ‘Rah’) in your work as an artist.  Is there a story behind this choice of name?

Raul: When in Thailand with friends during a full moon party, we went to a drum and base rave and they were having an open mic kind of night.  My friend and I were joking with each other about each one of us having a go at it and she said that my MC name should be RAA. I kind of liked it and the rest is history….

When did you discover you wanted to be an artist – did you always have an interest in abstract art?

Raul: I always wanted to be a graffiti artist when I was a kid.  I was born in the late 70’s so you know, hip hop was on the scene.  I knew everything about hip hop and graffitiing, break dancing, etc.  But I didn’t know if I could make a career out of it.  Then, literally four years ago, I started trying to pursue it seriously.  Artistry runs throughout our family too.  I don’t know if you know, but we are cousins! [Laughs] So, Otto always inspired me growing up as my older cousin. 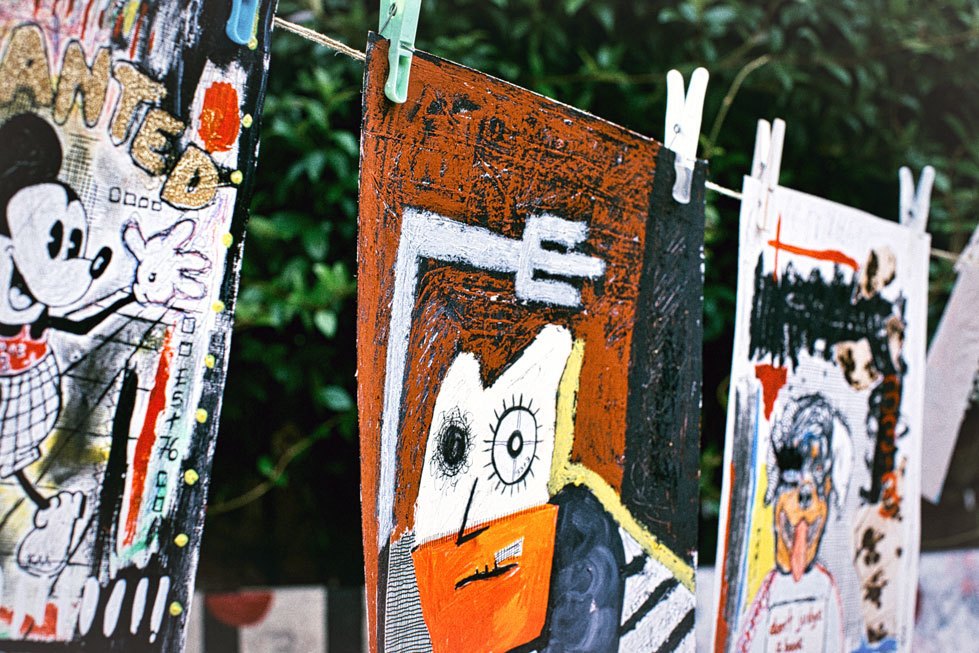 Which artists do you personally admire/are you influenced by, and why?

Two years ago, I believe I met an artist in Seoul, Korea; someone called Taher Jaoui – an abstract artist.  He’s really inspired me with my work.

When you create a piece, what is your creative process? Is it always the same?

Raul: To be honest, I don’t have a pattern.  I think 90% of the time I never plan.  But I always finalise my piece by naming it afterwards.

Otto: I am unbelievably surprised by that, Raul.  Your work is so specific, and the messages are so powerful.  I imagine there must be somewhere in your subconscious that gives you these ideas that you then turn into art. 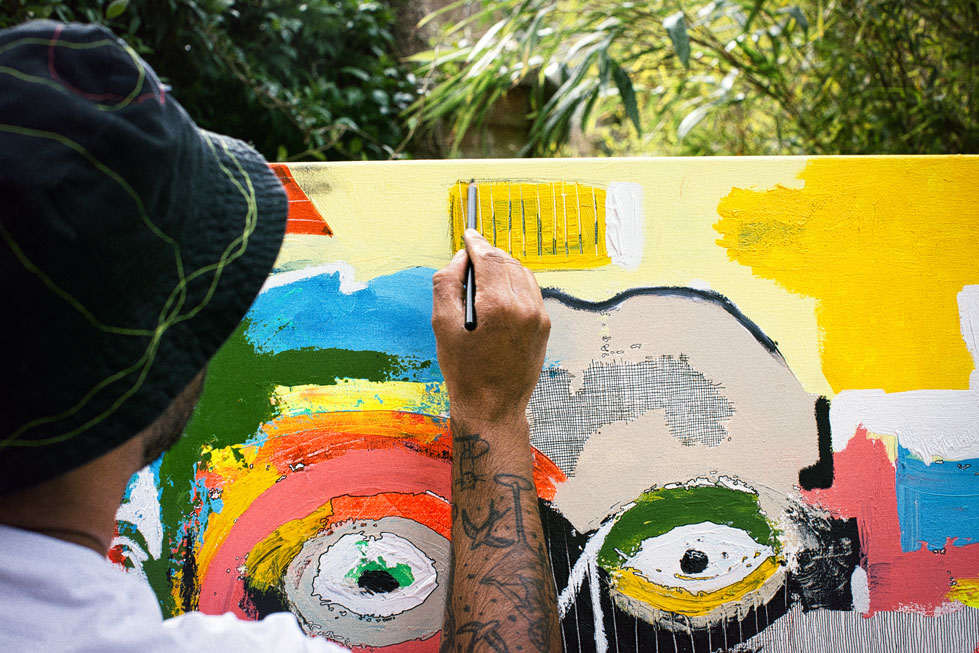 Otto:  All your works have such a clear message to me.  Somewhere in your subconscious I wonder if there is a method there.

And, particularly for abstraction, how do you decide when a piece you’re working on is ‘finished’?

Raul:  That is a tricky question.  I’m so impatient, sometimes I finish things in one go because I just want to get it done.  I then sit down a few days later and look at it and think, ‘oh this could go here, I could add something there.’  I sometimes then continue this process on the same piece for weeks and weeks.  It’s super hard for me to know when a painting is finished!

What is next for you? Any new work/exhibitions/events coming up?

Raul: My collection was on at 45 Park Lane until November 1st.  It’s a group show and the other three artists are super good, so I’m lucky to be in that bunch with them.  A few months back I managed to get representation with a gallery in Singapore, called Artworks Singapore.  I’m so happy to be represented by them, they represent a lot of artists who I follow and really like.  It was one of my main goals when I started out making art, it was one of my dreams to have representation.  I’m going to carry on painting and I feel like good things are gonna come.  If everything goes to plan I hope to set up a solo exhibition with them in Singapore. 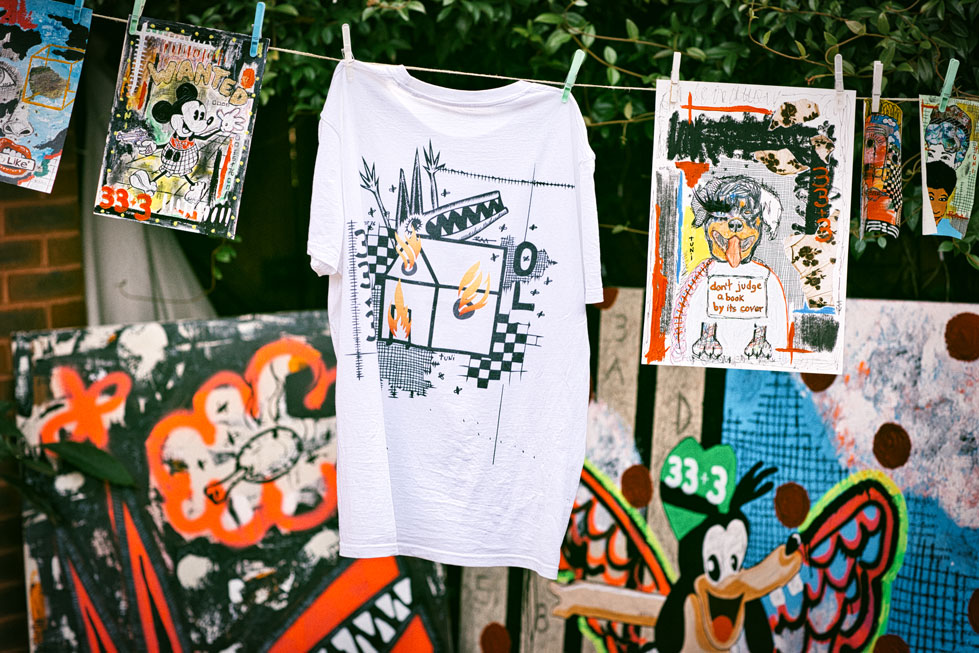 What is your background in fashion and the creative arts?

Otto: Growing up, I studied I studied art in every sense.  I studied a bit of photography, filmmaking, sculpting.  I have always been experimenting.  I remember making a lamp for my room and ever since then, I have been making objects.  I call it art with a purpose.  Often the function of the piece is not obvious, it is hidden in the shape.  It could be a piece of art on the wall but it has a purpose; a shelf, a coat rack.

I began to love making things and shaping things that have a function.  I guess my background is in industrial design, and in furniture design.  When I make objects, such as a lamp, I don’t think of the shape.  I think of the shadow, how the light reflects – I ask myself ‘how am I going to achieve that?’

Otto: I find that successful artists refine their craft and focus on one thing, master it and become an expert.  People know them because they represent that sound, or type of art, or painting.  What I do Is exactly the opposite.  Raul often says I cover too many things! 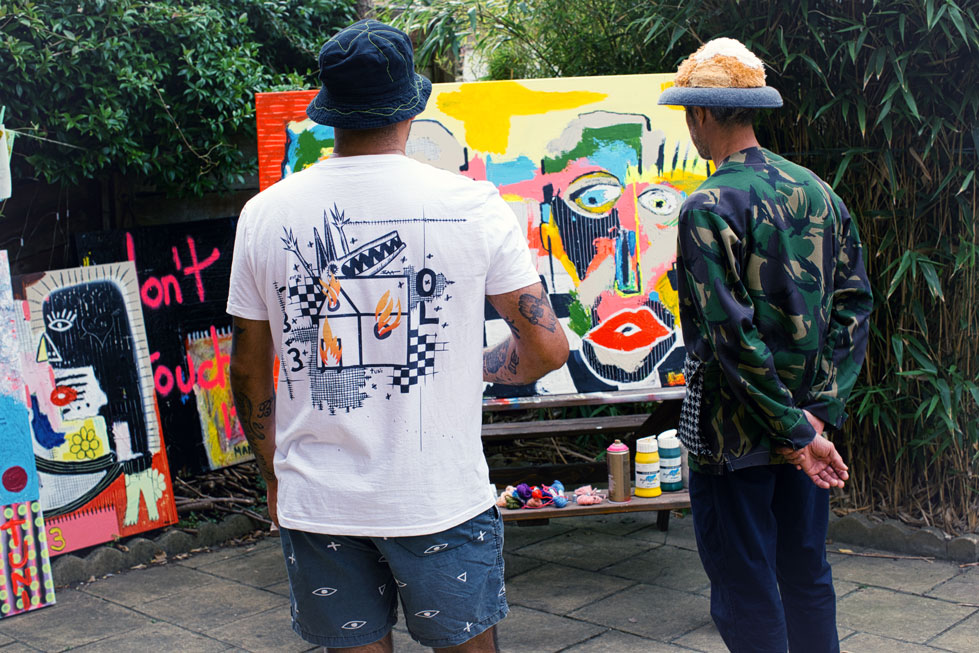 There is a big commitment to up-cycling with the Otto London brand.  You say how you like to see the beauty in discarded objects.  Do you feel strongly about the role you play in recycling and up-cycling materials to help the environmental crisis?

Otto: I think that the most effective way to have a positive impact is to start with yourself.  Having an effect in your immediate environment so that the people closest to you listen and feel inspired to make the change that you want.  But that’s a philosophy in every sense that you can apply that to politics, to religion.  I think generally it’s much more difficult to reach to the masses.  My main goal and in life is to inspire others.  I do not care about commercial success.  I will be happier if I inspire people to do what I do, to not just throw stuff away.

If we all did our little bit, then wow!  Every time I throw my rubbish out outside I think, ‘are the government really going to recycle this?’  You know?  I mean if the government did what they said they do, the world would be amazing.  But they don’t always do as they say.  So that’s my goal.  To aim for zero impact.  And to then subsequently give ten years of life to that meaningless object that we called ‘rubbish’. 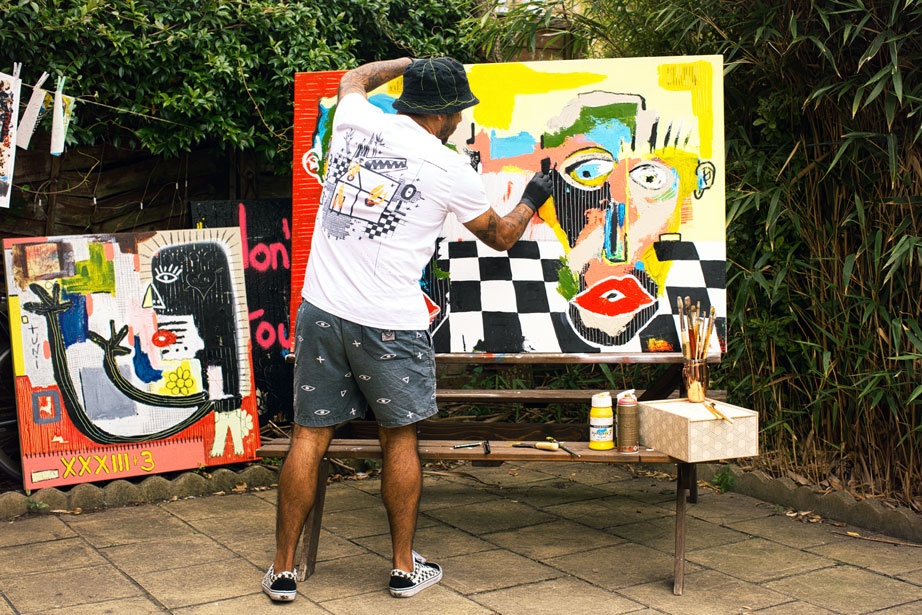 Otto London is a lifestyle brand that is home to clothing, art and special pieces that would make a home unique (such as bespoke lamps, side tables, etc).  What are your plans for Otto London in the future?

Otto: I want to continue my work on mushrooms, which our last collection was about.  I think they’re incredible.  Not only the impact they can have if you consume them – but also on the environment; the role they play in the eco system is so incredible.

The ultimate dream would be to have a huge warehouse where Otto London produces everything.  From material furniture design, to music, to fashion – having a group of designers who are always creating.  So, yeah.  Hopefully that goal of having a massive warehouse is on the way!

Watch the short film at THE FALLtv YouTube channel