Paris was, as usual, a triumph of innovation and creativity. We look at some of the best shows and films from the week

So, for the third season in a row, fashion week season ends with barely a flight being booked or a front row seat being taken.  Hand delivered invitations were still a thing, but’s what’s fashion without a few unexplainable quirks?  Paris had a lot to do to match the creative output of the London and Milan fashion weeks.  There’s something to be said for being possibly (probably?) the last fashion week of this enforced new digital era.  Paris was obligated to go out on a high.  What will be interesting to see is just how much of this new world will be combined with the old one in the coming new normal.

Until then, this is THE FALL’s look at some of the best collections, shows and films from Paris Fashion Week. 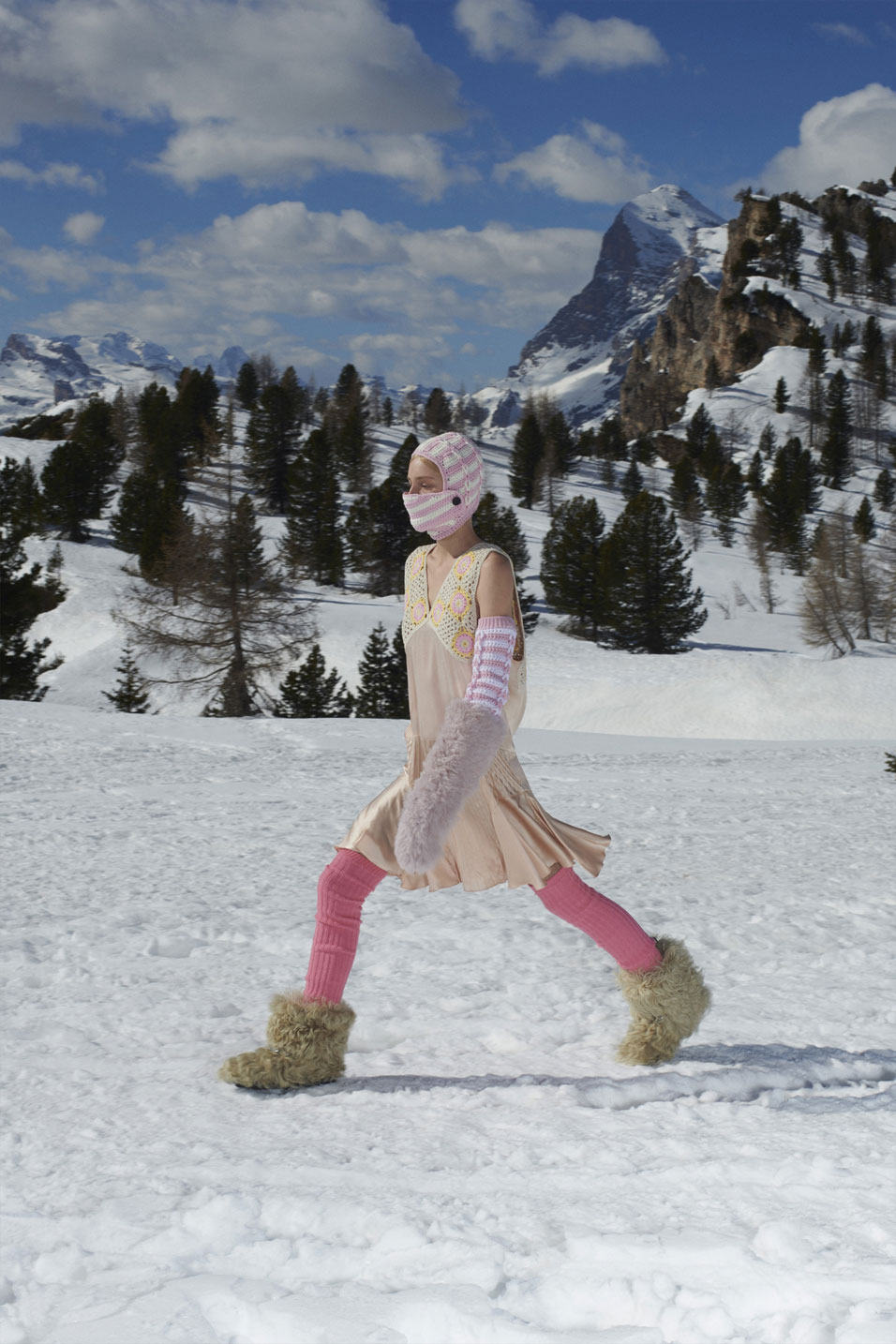 Winter really means winter for Miu Miu.  The spectacular backdrop of The Dolomite snow-capped mountain range in northern Italy was about as winter wonderland as you could get for a show film.  The ice white was a perfect canvas to paint some colourful pretty pictures.  Bubblegum pinks, deep cherry reds and lime greens stood out, while the shards of exposed rockface in the background perfectly matched the quilted tan ski-suit look when seen in the foreground. 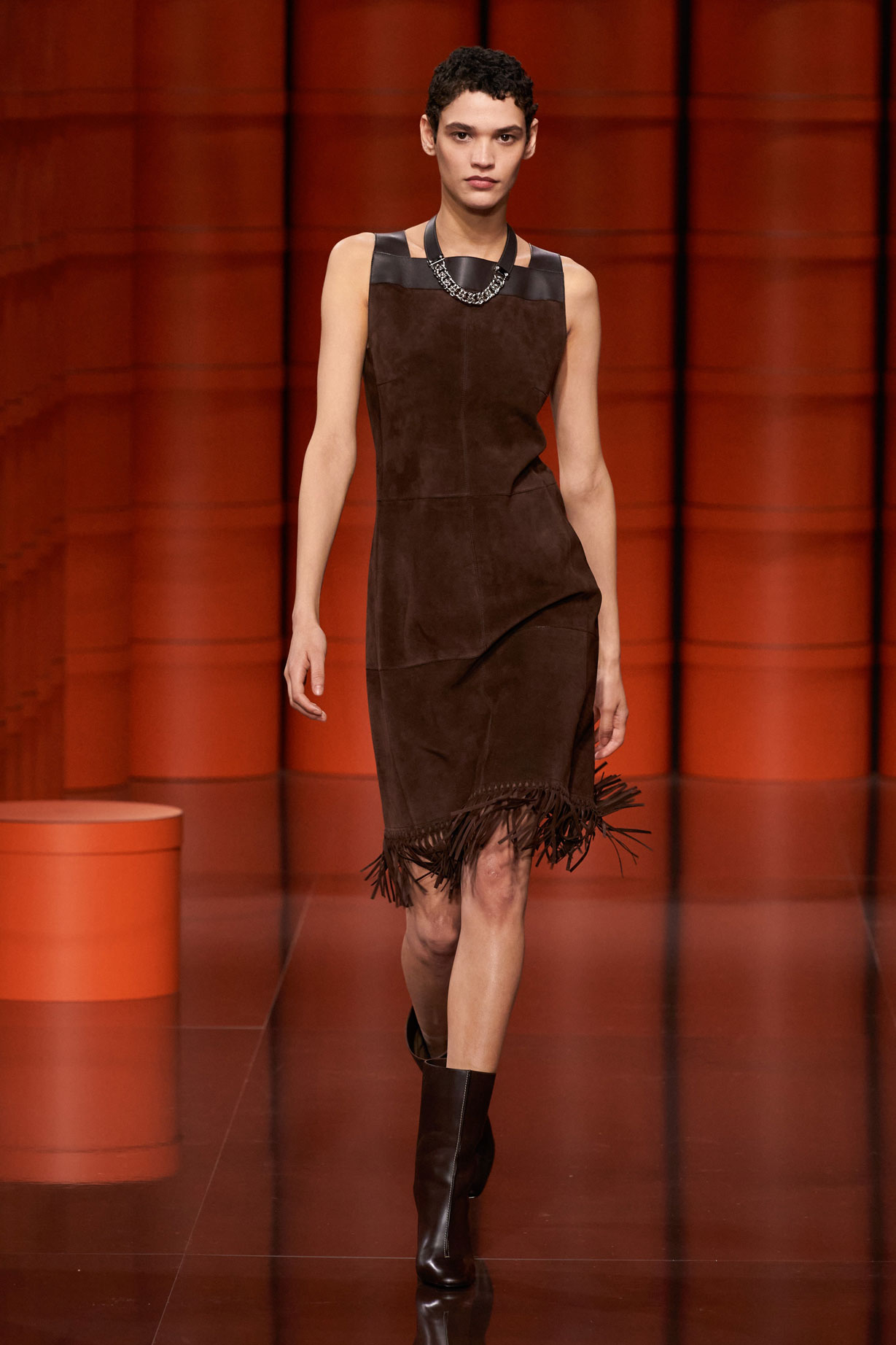 The Hermes show was just as spectacular as Miu Miu’s, if in completely different ways.  There are some recent show films from the fashion weeks that have been short, sharp and less than five minutes.  For the Hermes triptych of films the better part of half an hour was needed.   Part 1 took place in New York and featured a beautiful modern dance piece draped in Hermes’ signature colours.  Part 3 took place in Shanghai and and also featured an incredibly choreographed modern dance piece (involving a stage full of empty boxes).  The middle part of the triptych took place in Paris and was the main event showing Hermes’ beautiful – and extensive – winter collection.  Bit of an event. 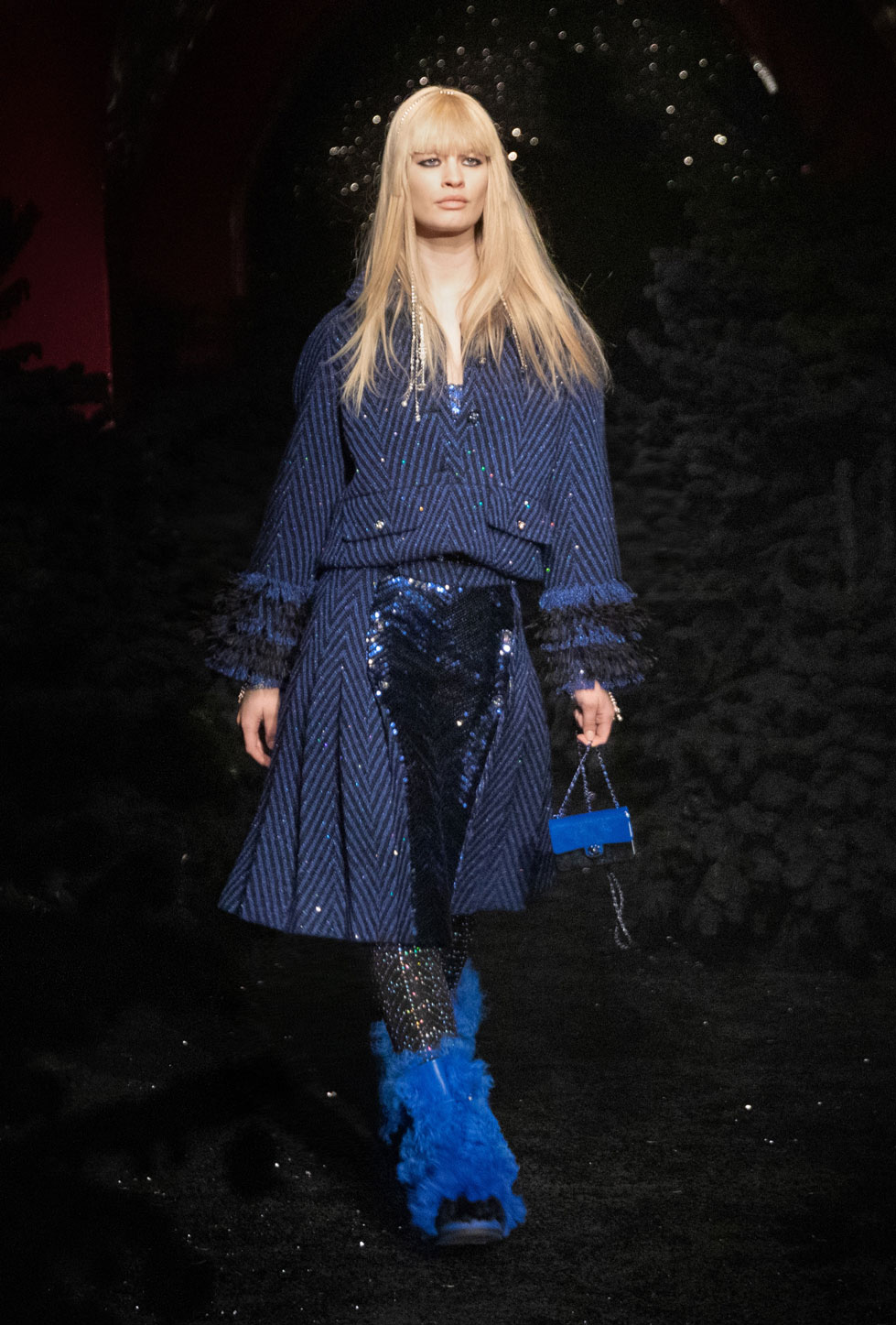 It would have been hard to get more Parisian chic than Chanel’s show film.  Playing like a documentary of models arriving and preparing for a fashion show, the Paris streets are shot in stark black and white to the soundtrack of Diana Ross’ Do you Know Where You’re Going To.  But before you settle too much into the Jean-Luc Goddard film you were creating in your mind, the soundtrack hits a sudden funk and we’re on the catwalk of Paris’ Club Castel in full colour.  The black velvet walls and floors of the club frame the ultra modern colours, styles and textures of the collection with just the right amount of drama.  Watch the show film at THE FALLtv. 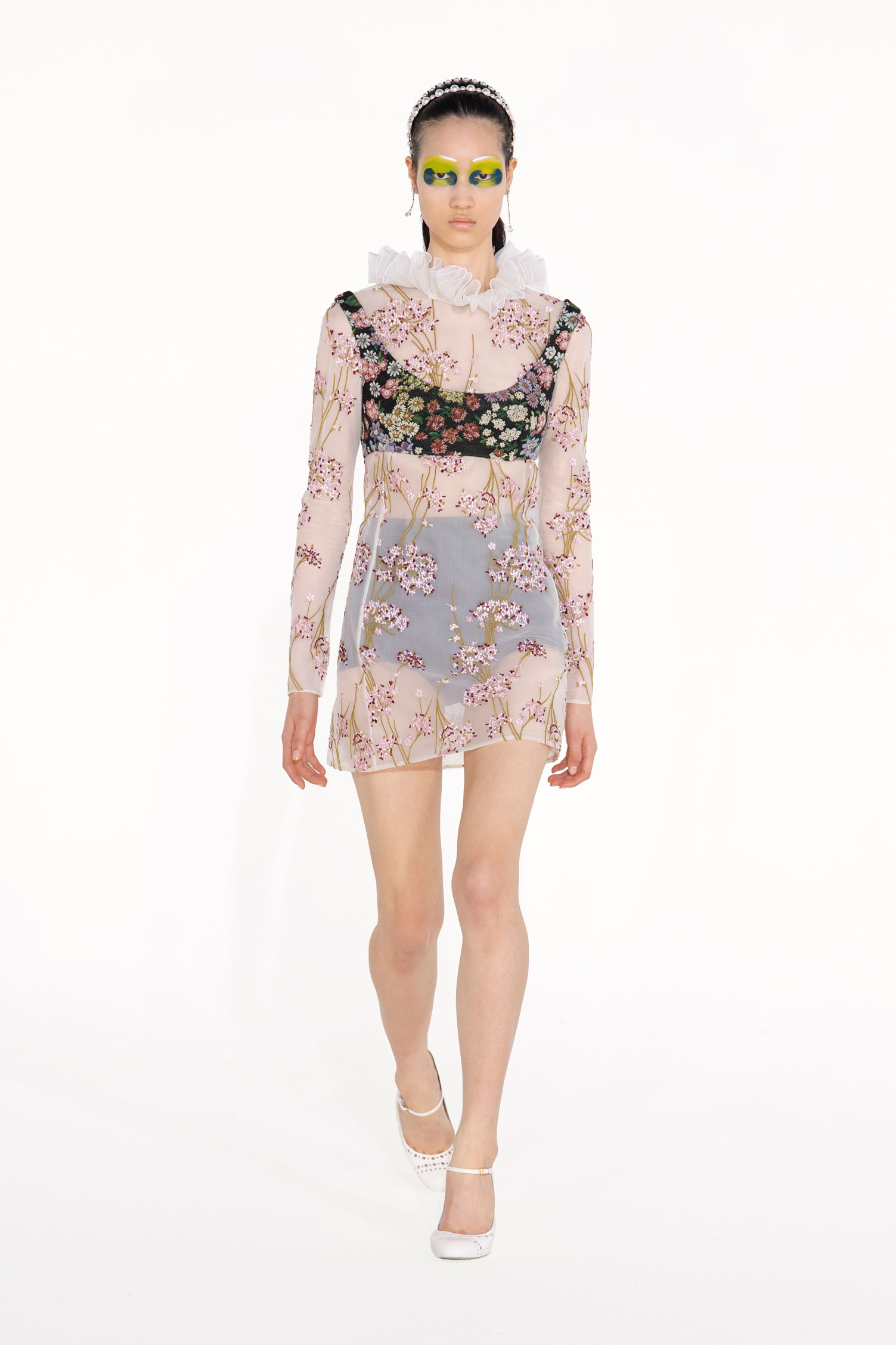 There was a theme running through a lot of PFW this season: stark backdrops as a canvas.  So it was with Giambattista Valli’s show, set in a massive white bowl of a space.  The infinity illusion allowed for multiple models in multiple looks to continuously criss-cross each other while being filmed from multiple angles.  And again, the setting made looks like the gold (and the black) sequinned, two-piece skirt suit sparkle, while softening romantic salmon slip dresses. 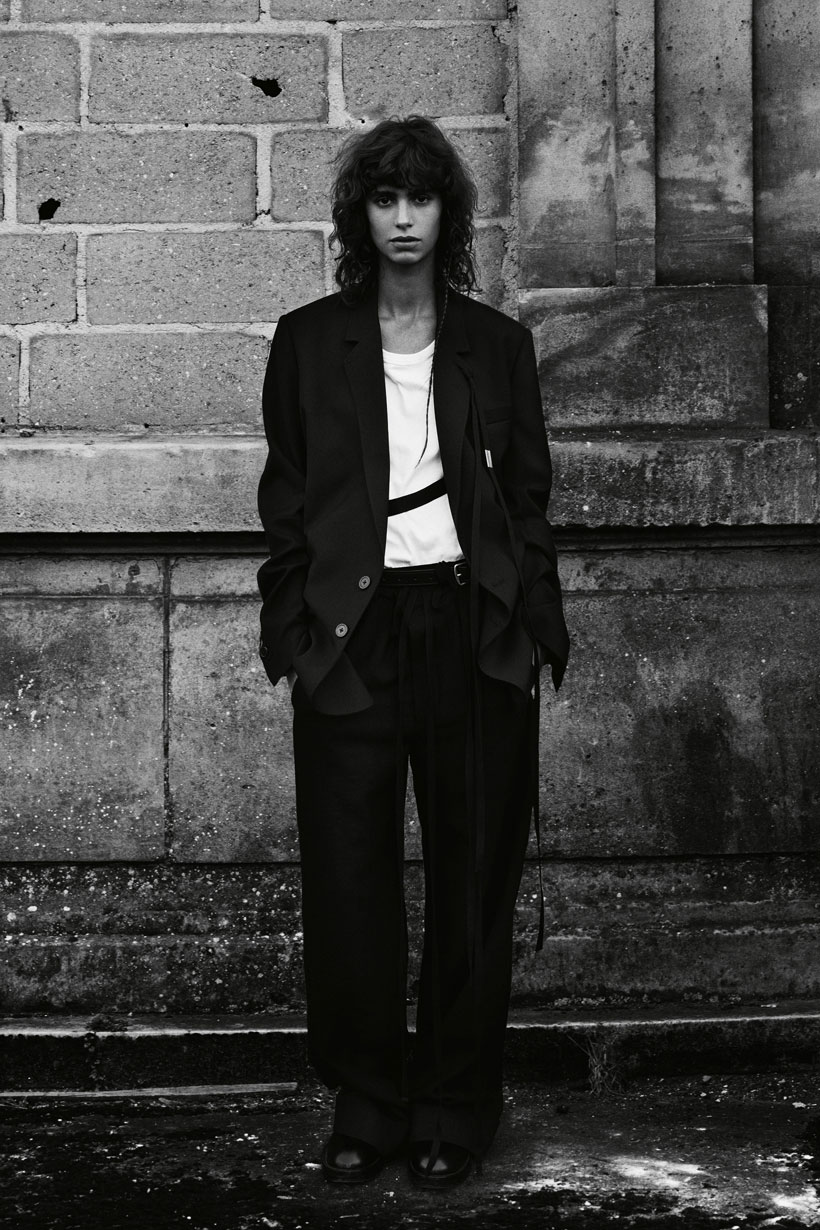 Apart from having was of the best names to say out loud in fashion, Ann Demeulemeester’s show film was easily the most moody and cinematic of the week.  Shot (almost) entirely in black and white and with a haunting instrumental score – complete with vinyl record ‘crackles’ – we could almost have been watching a Frederic Fellini flick.  The tone helped to enhance the elegant simplicity and understated drama of the collection to great effect. 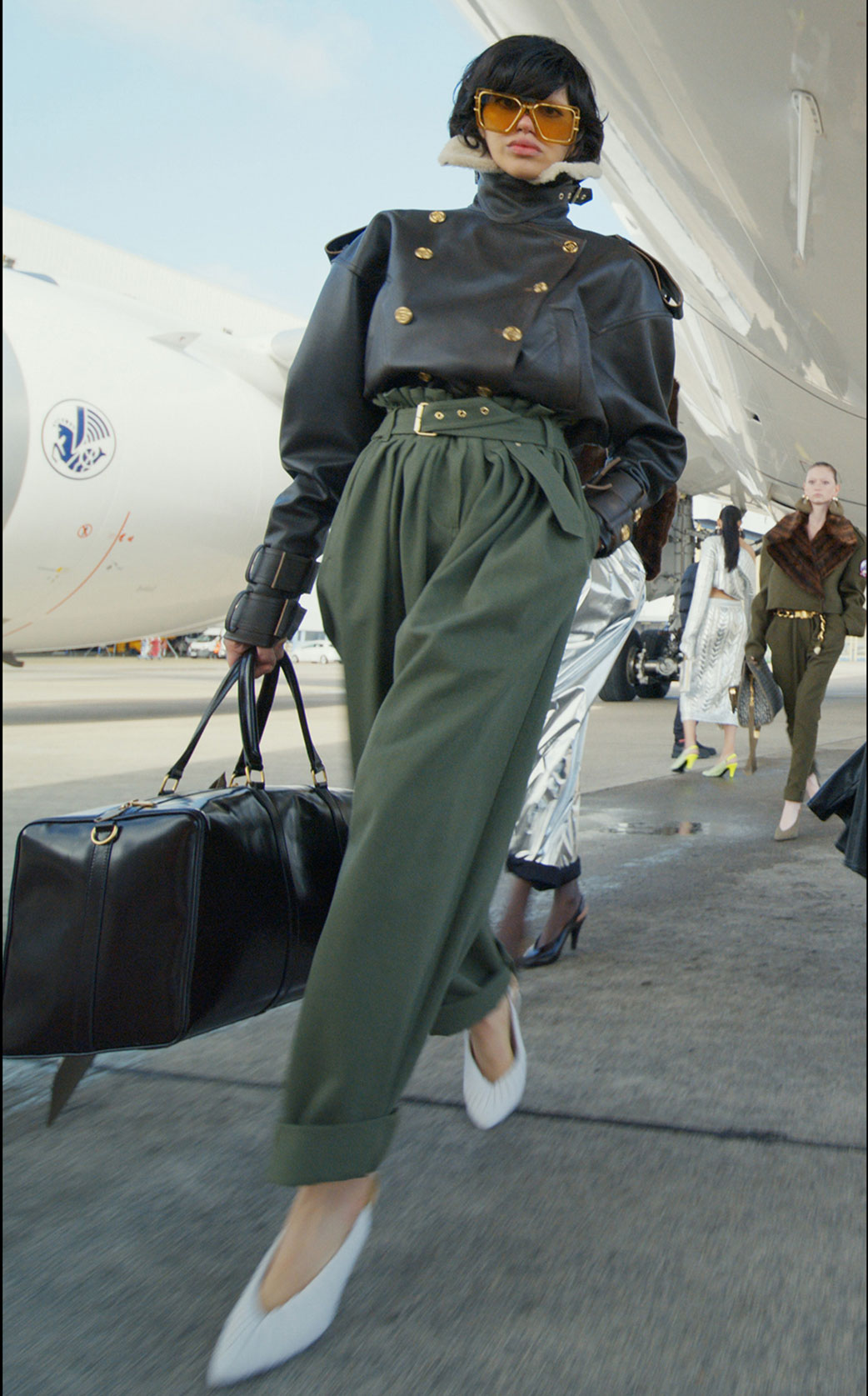 If you know the film Friday, then you’ll know that one of the music videos by Dr. Dre on the soundtrack begins with the line, “we’ve got a plane!”  Perhaps this was what Olivier Roustieng said to his team when he confirmed an Air France jet liner for the Balmain show film.  With the strong aviation influence to the collection, the choice was flawless.  And, as things moved more ‘out of this world’, the setting changed to studio projections of the stars and the moon to complement the flight-suit inspired looks. 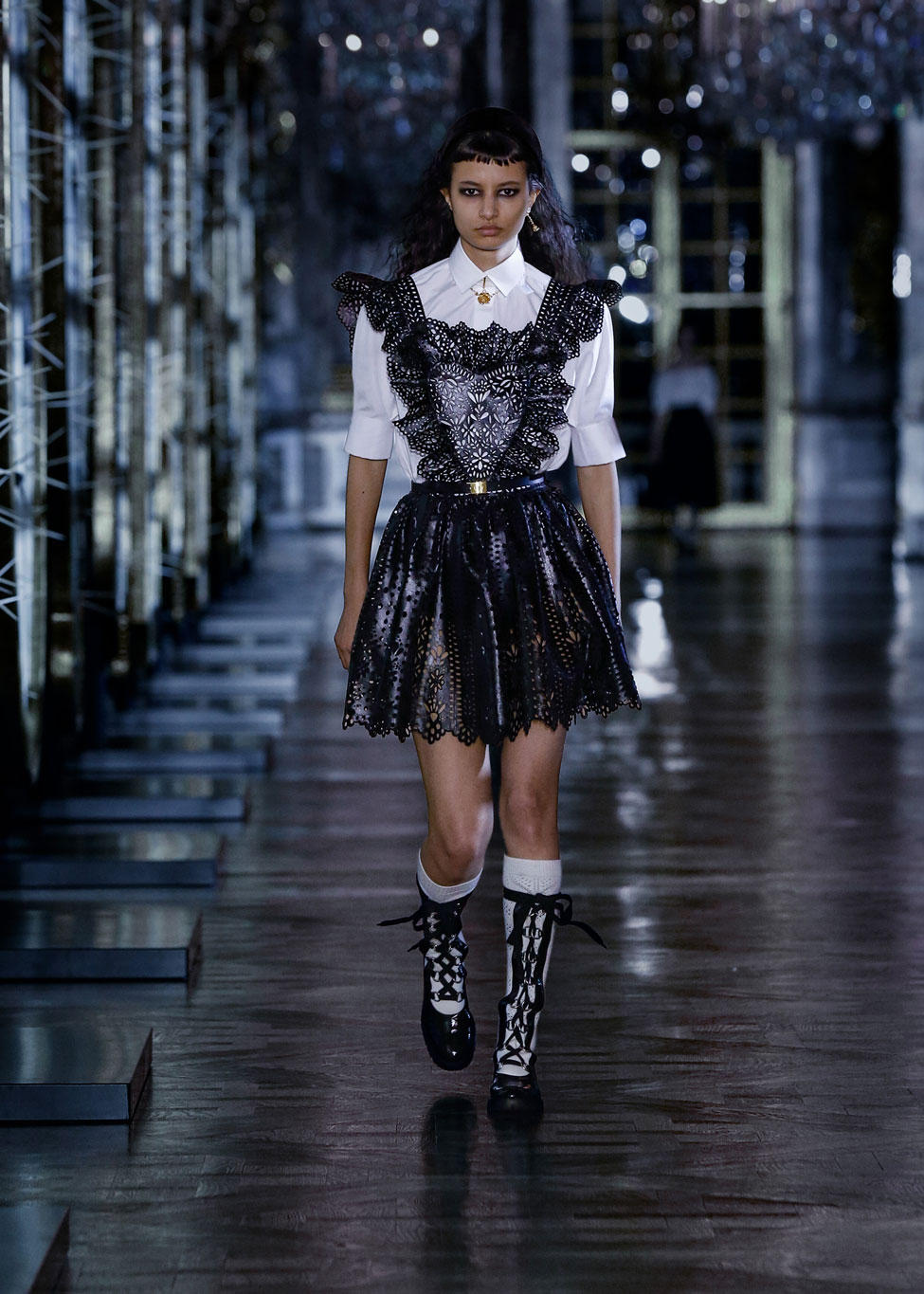 Dior’s show film, aptly titled Disturbing Beauty, also went for cinematic drama, with modern dance at its heart.  This time however, the aesthetic was more gothic fairytale than Fellini.  The setting for the collection itself was an incredible ballroom with ornate chandeliers and giant empty frames growing thorns lining one side of the room and reflecting the light from the windows on the other side.  Even the mood lighting set the scene for the strong, bold and opulent design aesthetic of the collection. 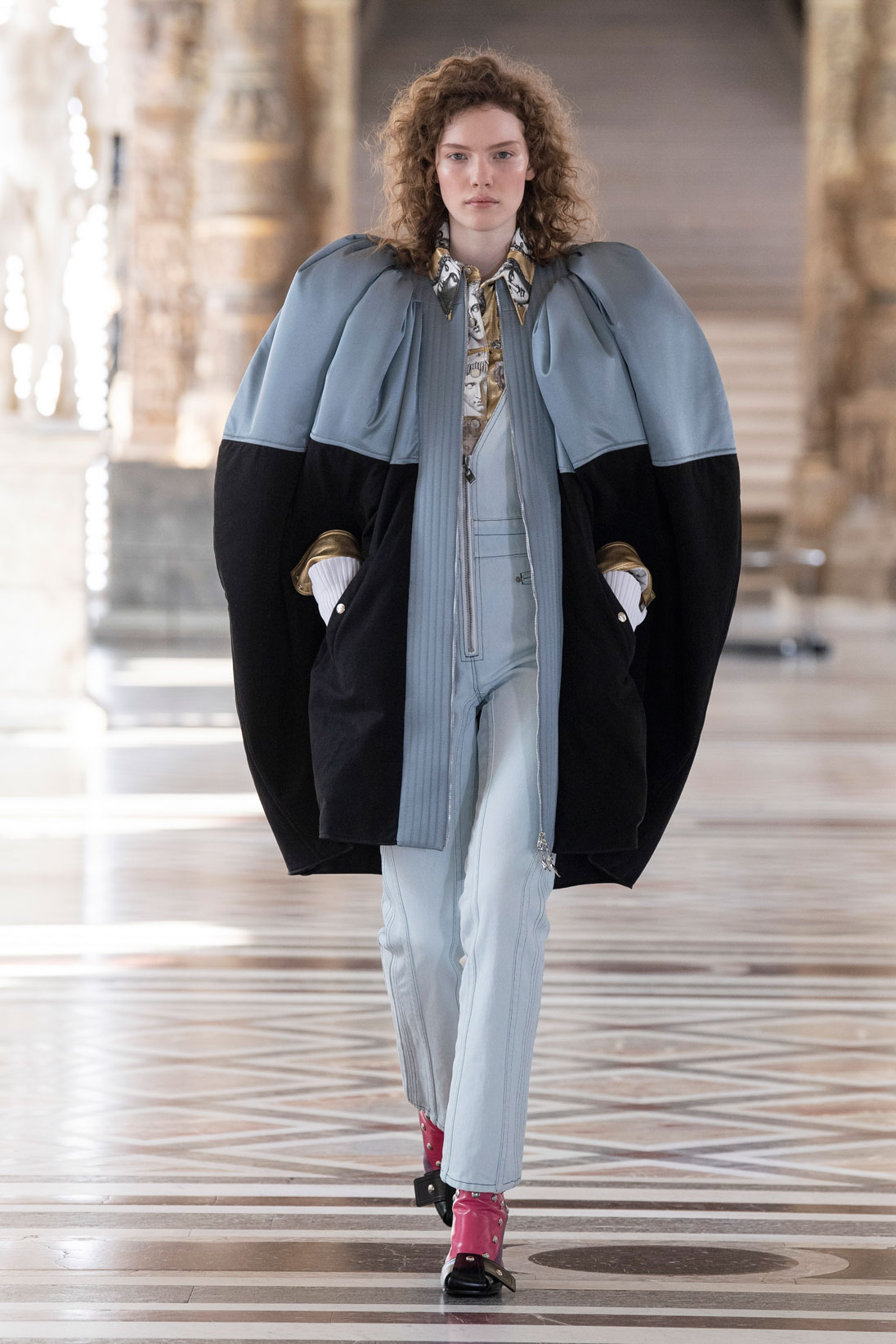 What would Paris Fashion Week really be without a show at The Louvre?  Louis Vuitton had that honour as the last show of the week.  In a nice touch, creative director Nicolas Ghesquière introduced the show himself as part of the film.  Along with Miuccia and Raf for Prada, it’s nice to see some of the designers behind these collections using these film opportunities to build more personal relationships with their audiences.   LV even managed to make the show that little more special by using a song from the recently departed (as a group) Daft Punk on the soundtrack. 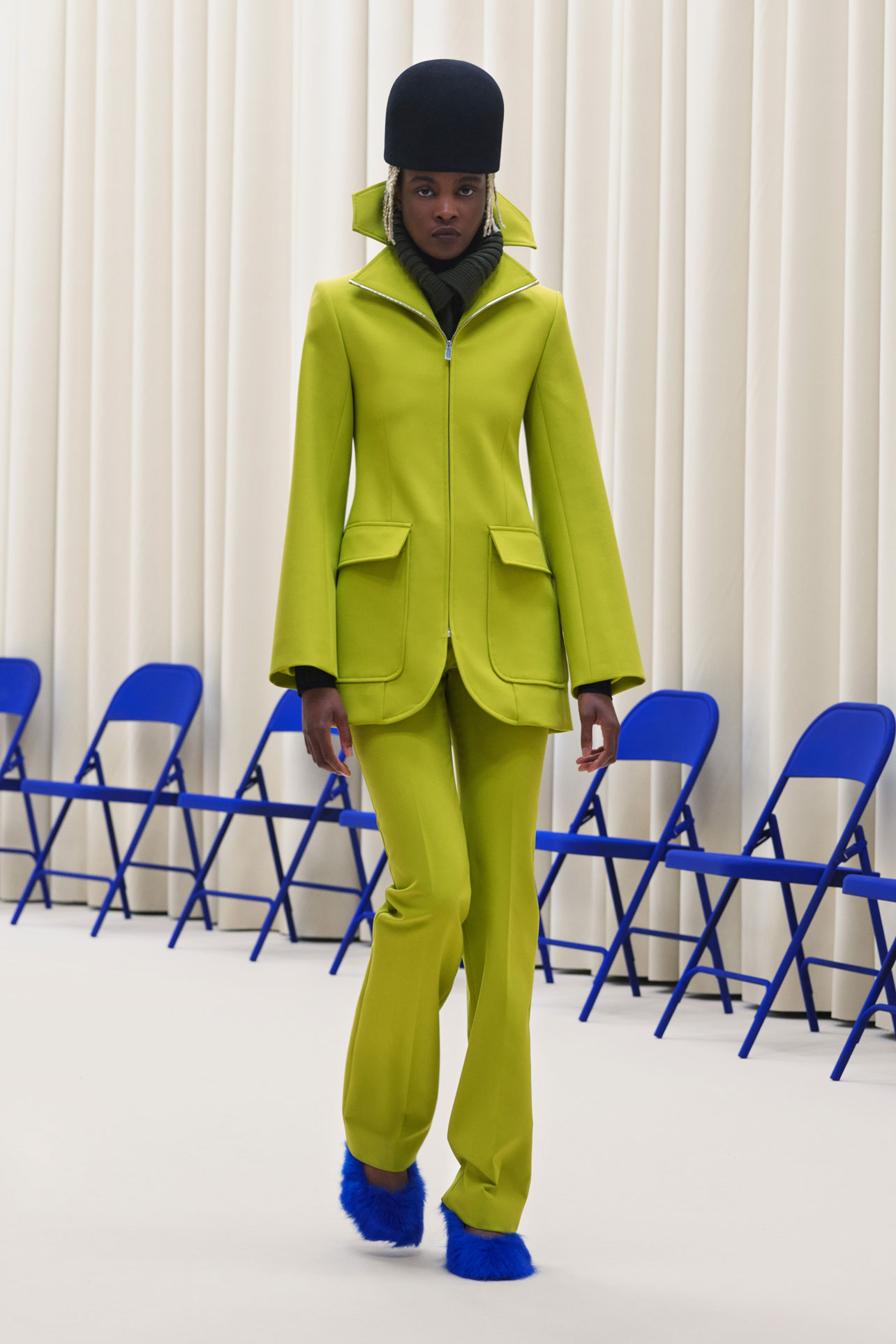 The laboratory white setting for Nina Ricci’s collection had the added effect of focusing our eyes on the sharp citrus colours that punctuated the young, modern looks of the collection.  The donut-shaped ‘amphitheatre’ where the show was shot had the nice touch of being lined all around the perimeter with empty bright blue chairs – presumably where the world’s fashion press would have been gathered in less dystopian times.  Bonus points for the matching bright blue, furry shoes on some of the models as they walked the circuit. 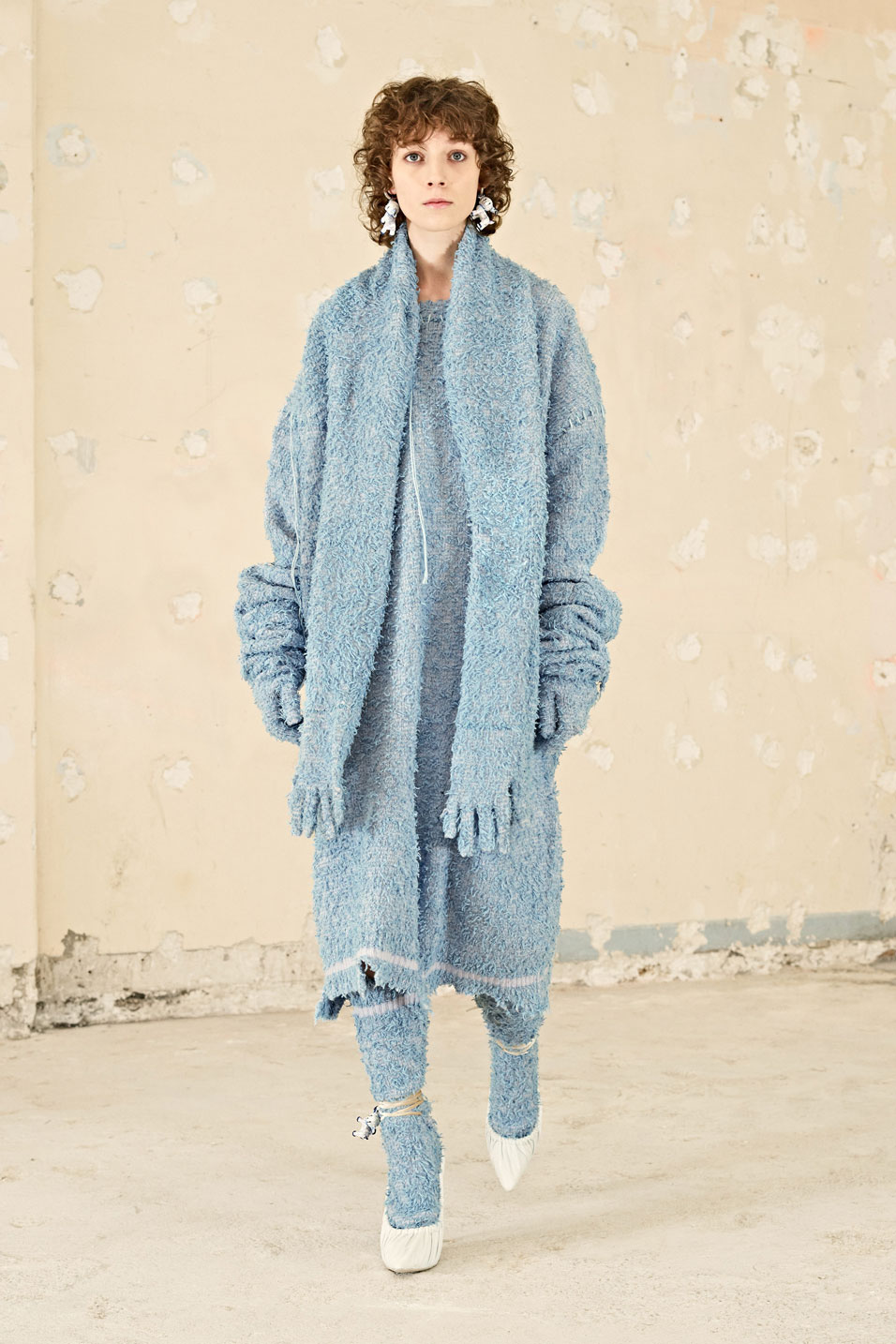 At a little over three-and-a-half minutes, the Acne Studios film was one of the shortest of the week, but packed a mighty punch.  Taking full advantage of the deconstructed location and vintage camera effects, the Swedish fashion house displayed relaxed cuts, exciting but comfortable silhouettes and innovative, and unusual designs touches to a laid back hip hop beat that really had you wanting to get a little bit more than just three minutes.

Click here to read or round-up of Milan Fashion Week.