MFW was another feast of innovation and clothes creation. We run down some of our favourite shows

It feels odd to say “moving from London Fashion Week to Milan Fashion Week….” because, the truth is, no-one has moved.  Now, it’s more just a shift of focus.  And, as always, without the benefit of a captive audience, brands had to not only reinvent how they work in this new environment, but also how to present their collections in ways that resisted against the temptation of a billion (?) other distractions at your finger tips.   As with London, Milan hit the ground running.  And as each fashion week season passes it gets easier to see just how important these new ways of interacting with an audience are going to be in the new normal going forward.

Milan has already headed over to Paris so time for us to highlight some of the best shows from #MFW. 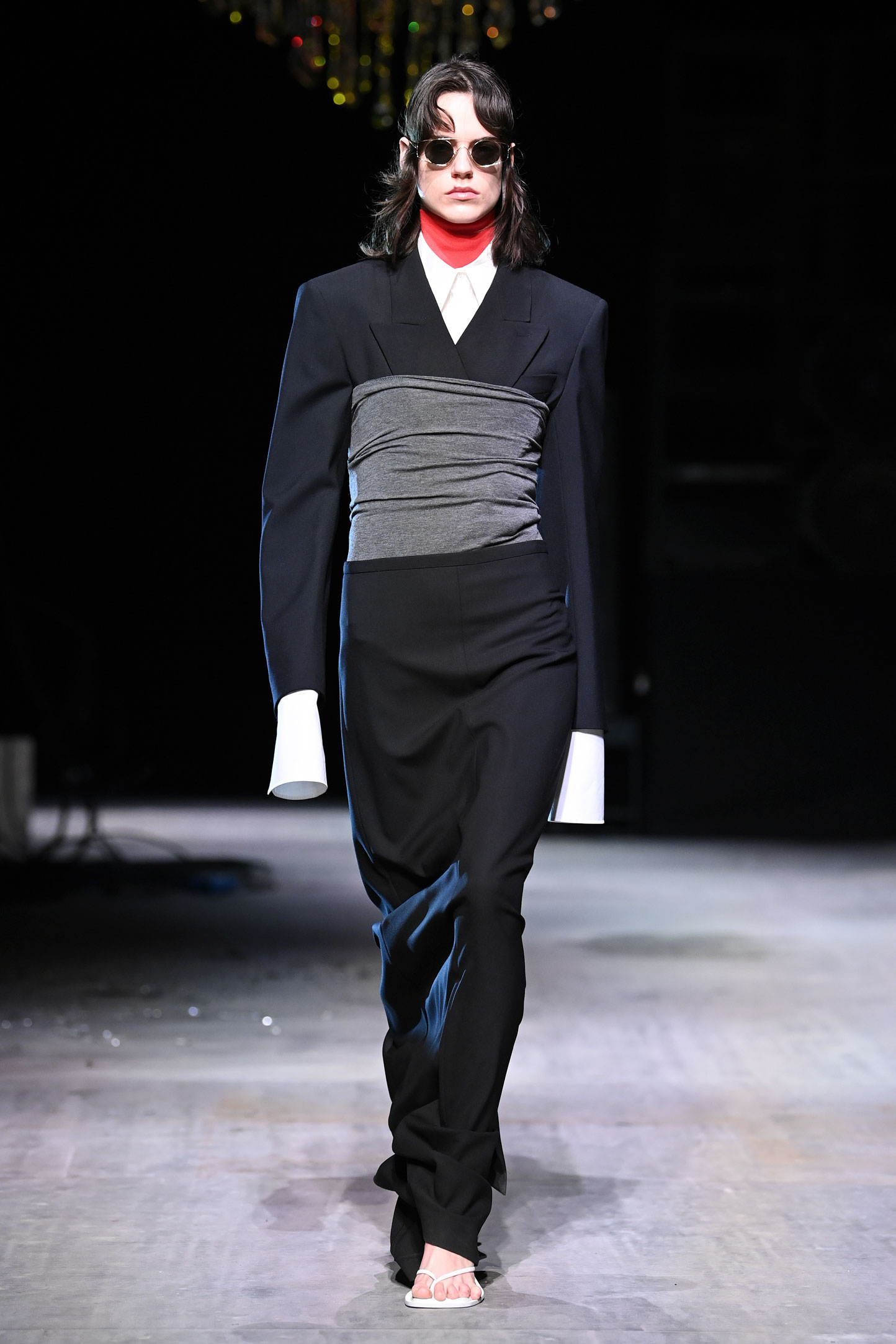 Sportmax was all about long, clean lines, sleek shapes, interesting cuts and solid colours – it’s true.  Most of all though, Sportmax was about drama.  Those long lines cut a sharp edge in the darkened abandoned ballroom where the show was filmed.  The dark worked perfectly to emphasise the sudden swathes of colour – and then everything turned white. 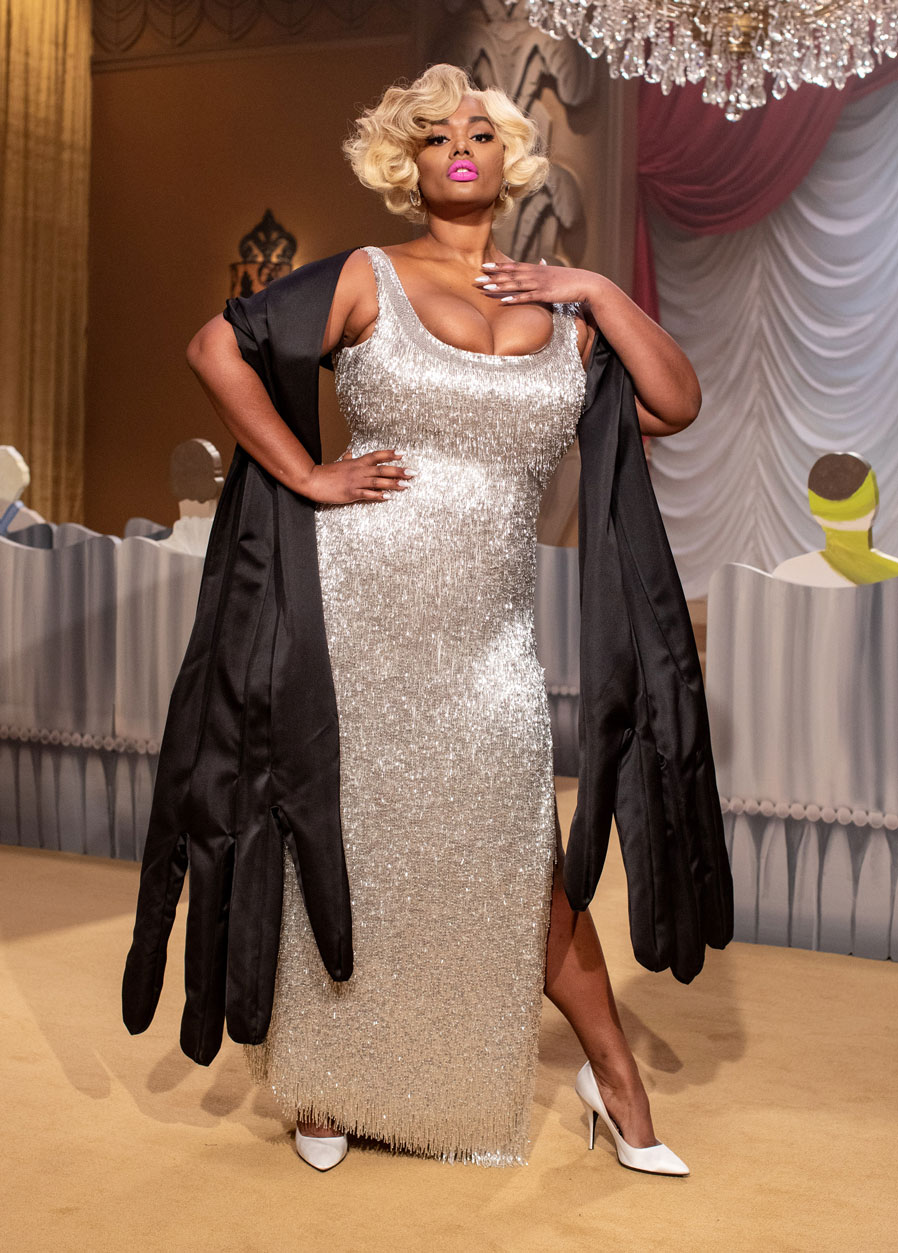 Jeremy Scott’s head must be a fun place to be.   There’s all sorts of good things going on in there.  Last season it was the marionette show that mimicked the department store fashion shows of the golden age of cinema –  complete with likenesses of fashion royalty.  This time, Scott did it for real; taking us on a journey through the occasions to wear the collection – city, countryside, art gallery and even Jungle Red.  The closing credits perfect. 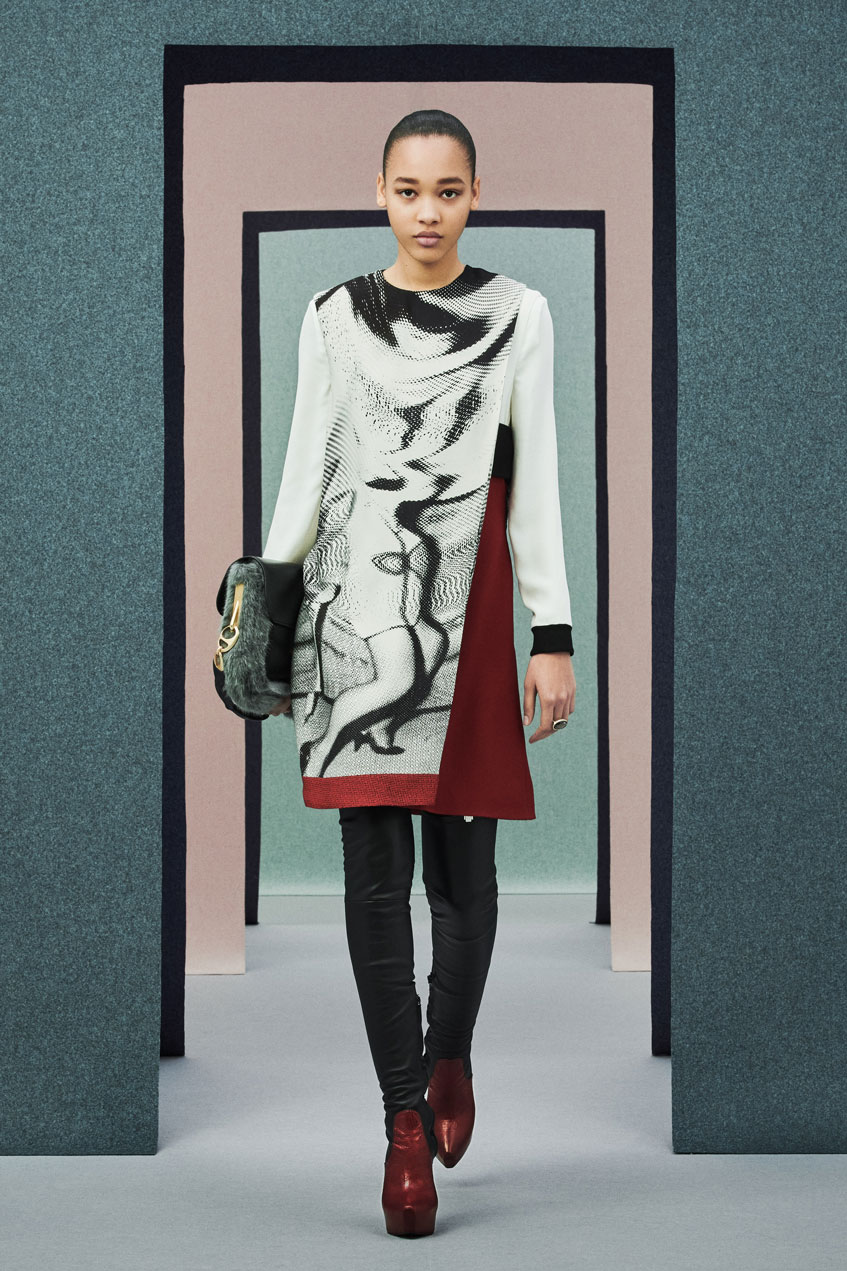 Ports 1961’s MFW video was more of a traditional fashion show but, like Sportmax, the models emerged out the darkness to step into the light, only to be swallowed by that darkness again.  In the light we could see the exciting silhouettes the Canadian company is playing with for winter.  Thick knitted jumpers with oversized collars enveloping the shoulders and over-long banana shaped sleeves stood out.  As did this simpler, long-sleeve dress with the striking graphic print teamed with drainpipe leather trousers. 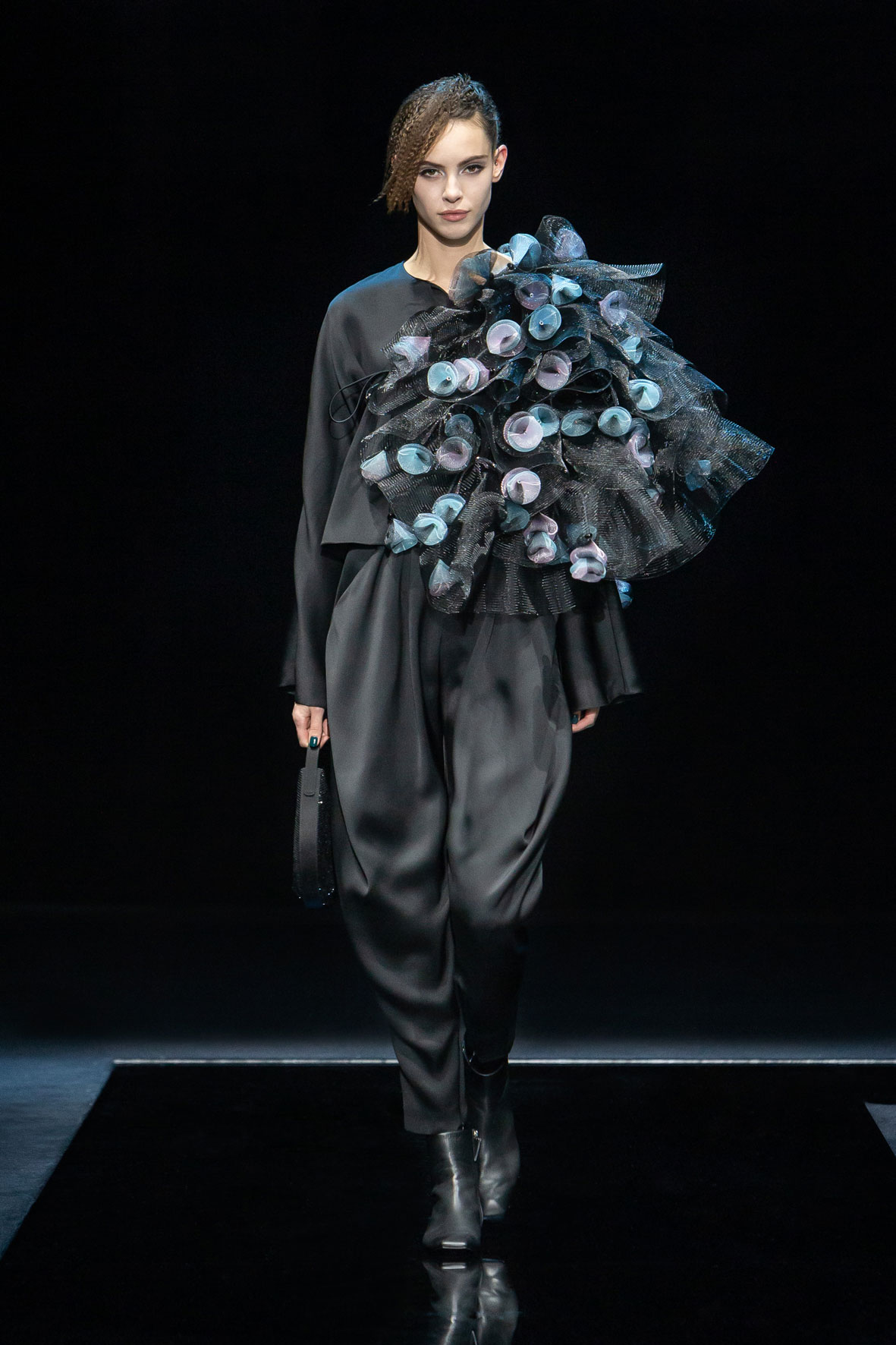 Giorgio Armani’s winter season will definitely be cool.  The palette for the collection erred on the side of black, muted greys and cool blues.  Lots of these colours were seen in materials that shimmered in the light, adding an extra life and vibrancy to the collection to complement the sombre tones.  Especially effective were the velvet pieces in deep-space black and either infused with sequins or lined with sequins along the edges. 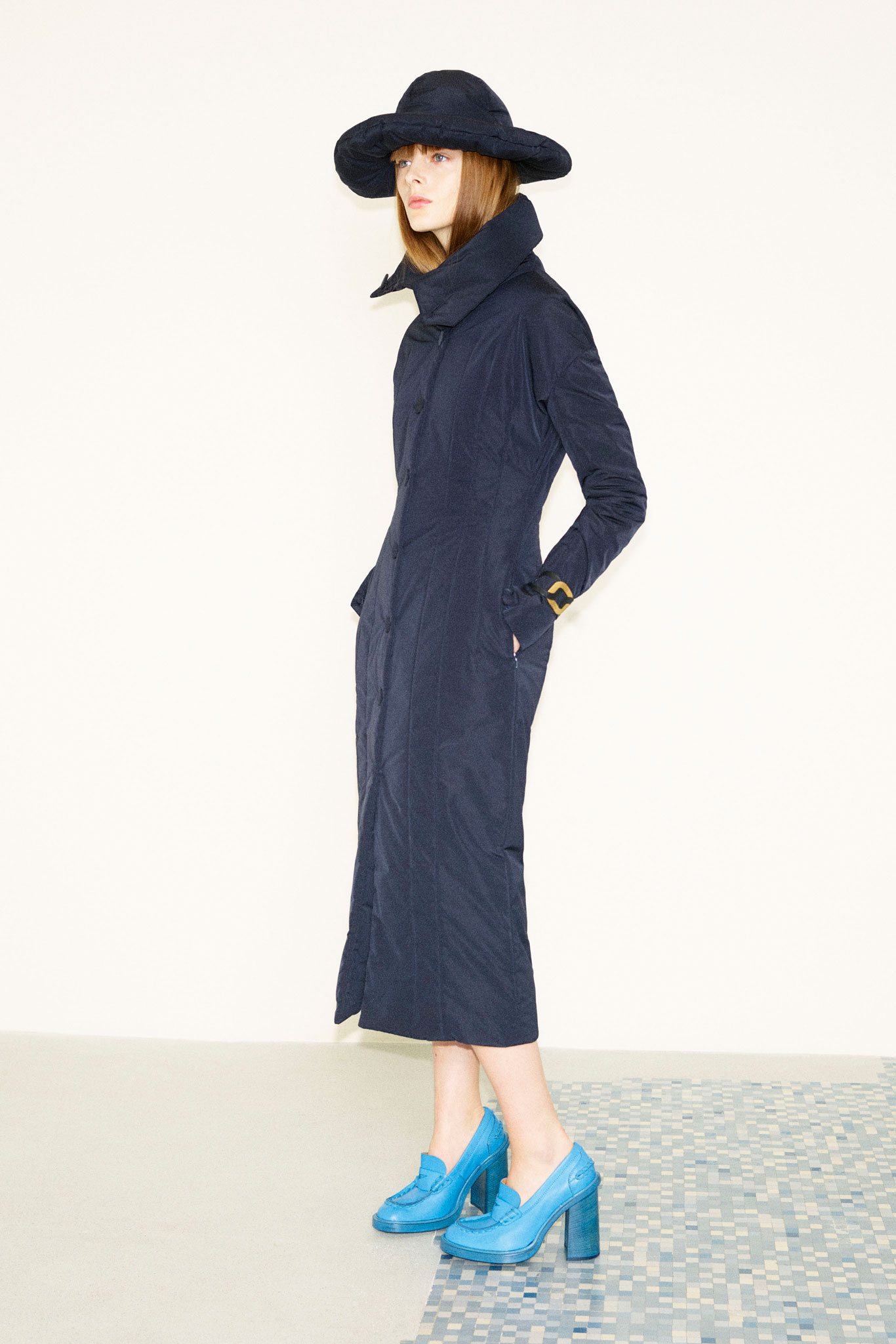 There was some beautiful colour combinations in the TOD’S show film.  Warm chocolate browns were teamed with navy blues, fresh salmon accompanied baby blues and cherry red sat on top of leather black.    In a film called In a momenT  (that’s right, you have to lean into the T when you say it) the narrator recites a poem with the line, “many selves are in myself” and it was easy to see the different women a woman could be in the TOD’S A/W collection. 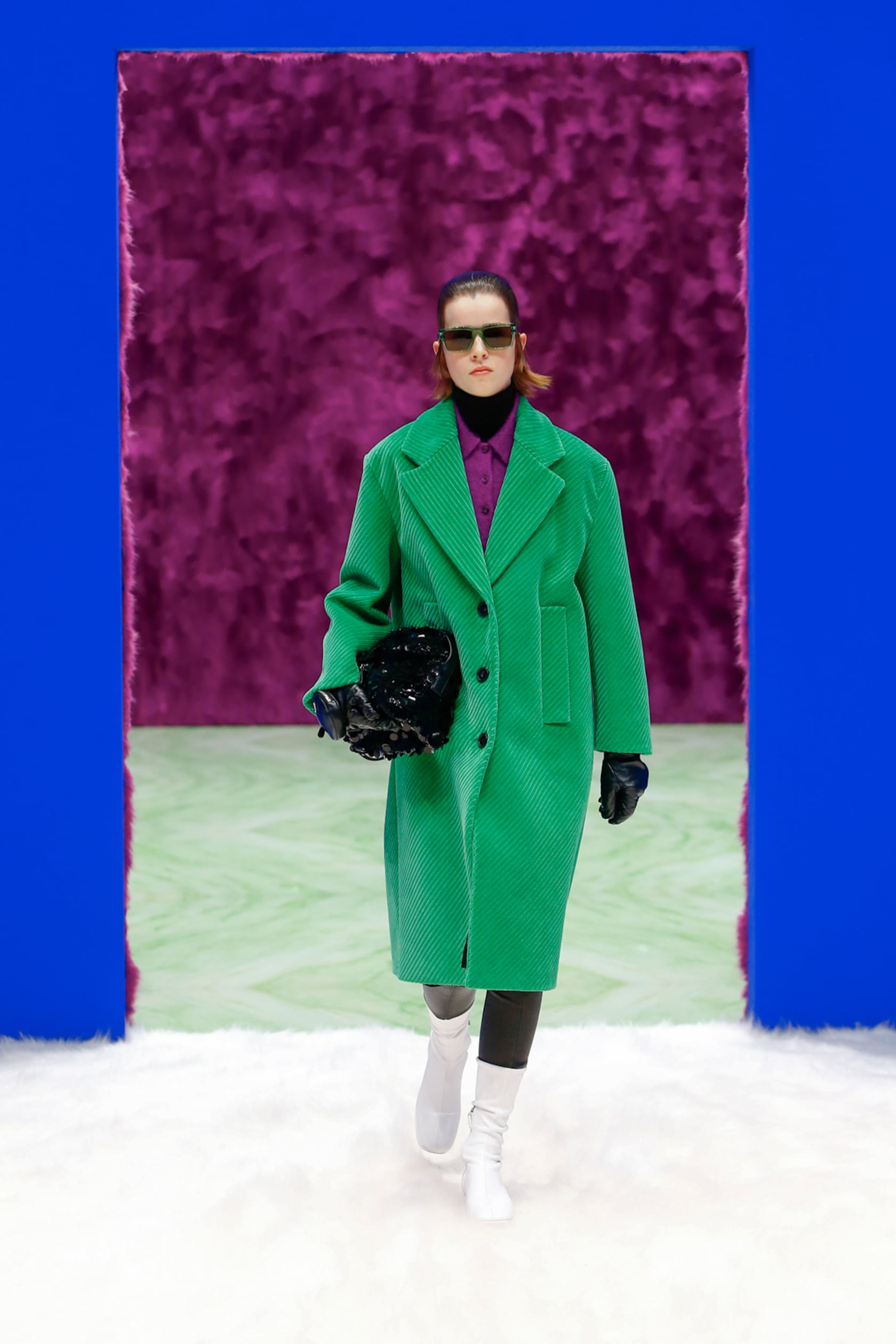 Clashes and contrasts were a prominent feature for the Prada collection.  Striking graphic patterns sat under or on top of solid colours for a hint of clash, while bright and bold colours were teamed together to provide the contrast.  As a way of visualising these two elements, the models walked in and out of rooms that alternated between shag pile carpet and smooth walls and smooth floors and shag pile walls – each mimicking the contrast in colours throughout the collection.  One of the innovations with Prada’s Covid show seasons recently has been the after show chats with both Muiccia and Raf answering questions about the collection and the show. 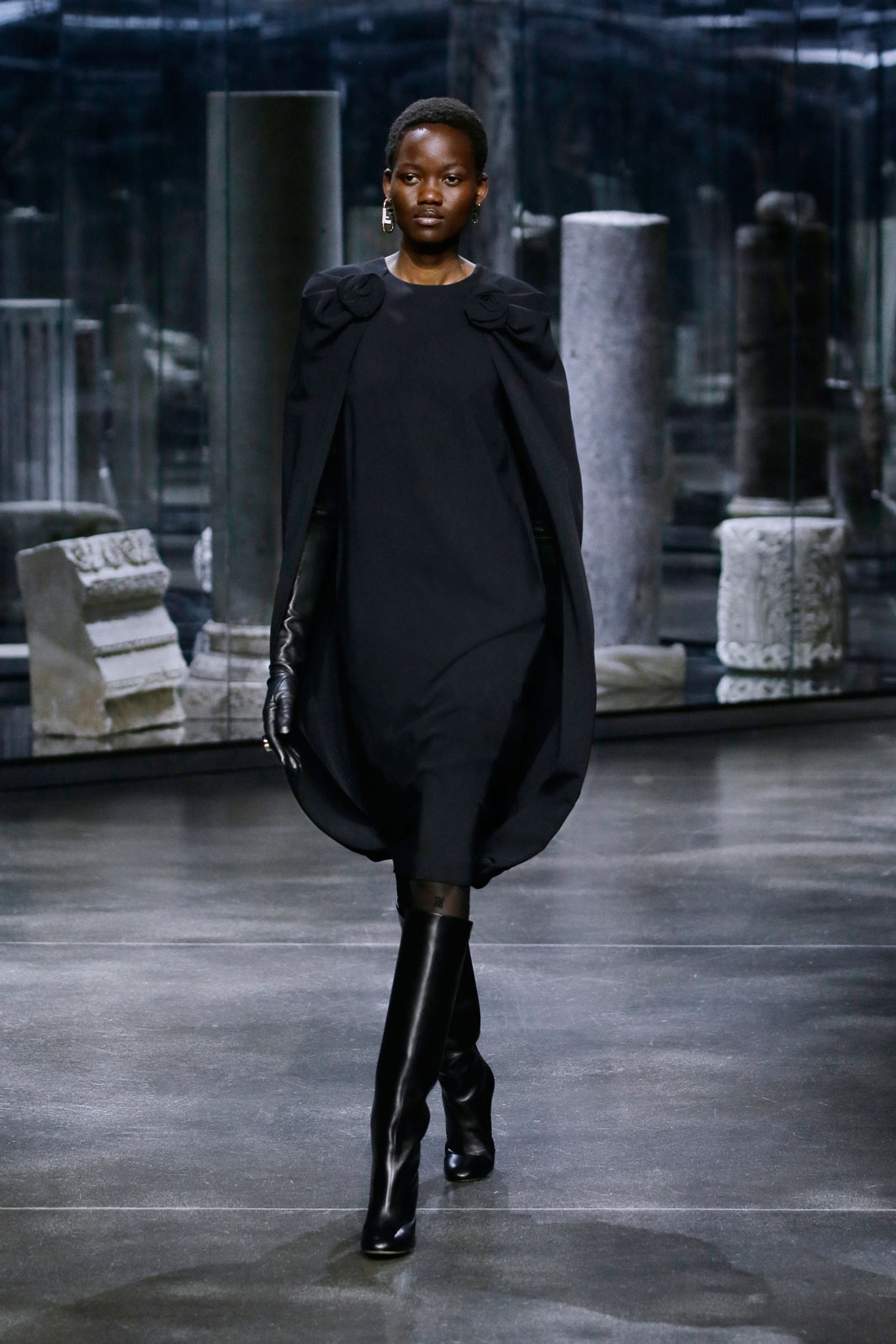 Kim Jones’ beautiful collection for Fendi came with inspiration directly from the Fendi sisters themselves.  Channelling their combined history of luxury fashion, we were treated soft and beautiful silhouettes founded on a palette of camels, browns and tans, with the occasional blasts of cream, ivory white, dusty pinks and blacks.  The family connection didn’t stop there either.  Delfina Fendi’s new jewellery range, Fendi O’Lock, dressed the collection alongside a new range of bags by Silvia herself. 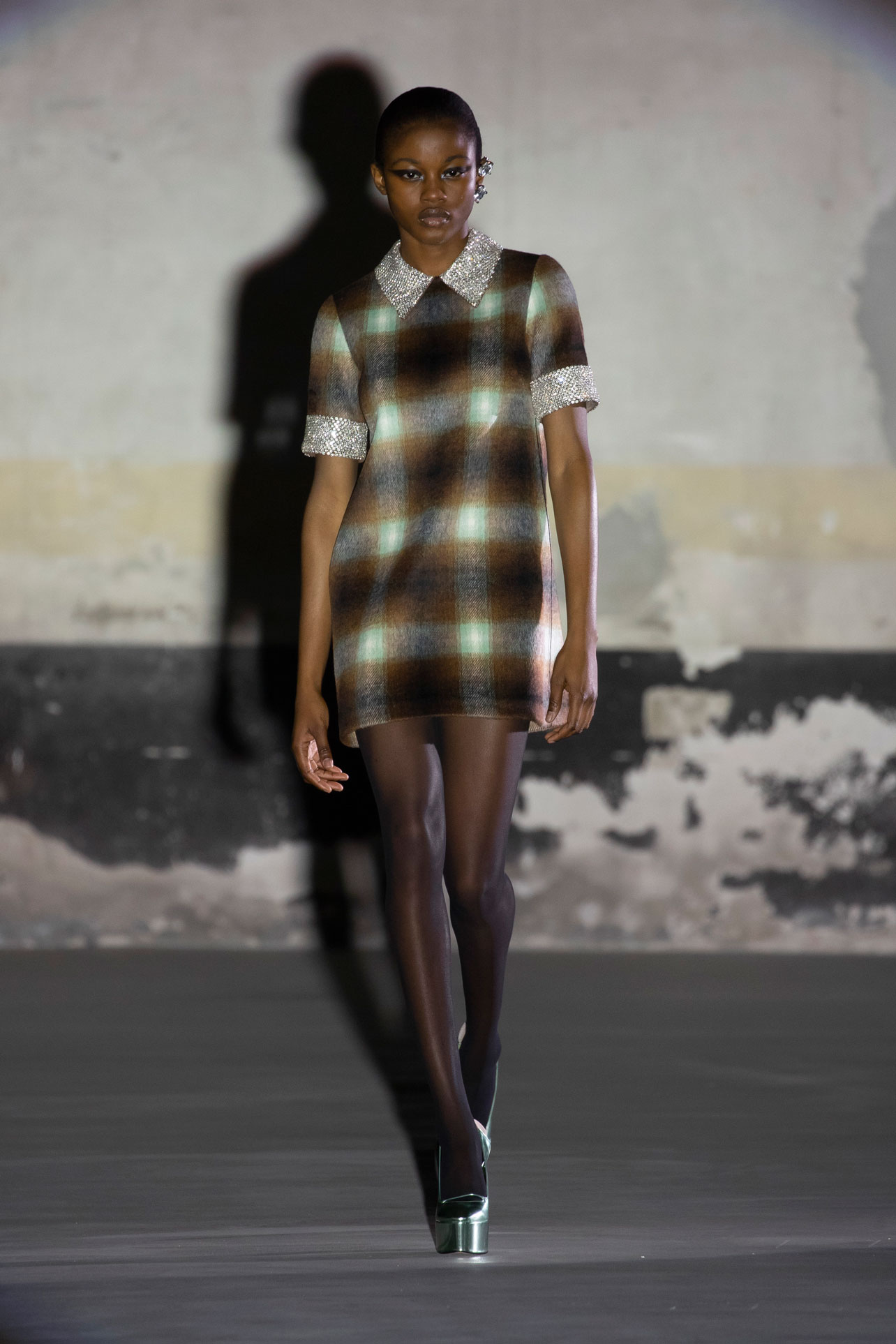 There’s an underlying theme with a lot of the shows from #MFW.  Models stepping out of the darkness into the light seems an apt metaphor for where we are.  N21 by Alessandro Dell’Acqua presented their show along these lines, but with the added drama of the models being followed by spotlights to illuminate them, and the setting being a large factory space with dilapidated walls.  It was a perfect backdrop for the young and contemporary collection, showing off a number beautiful, leg-baring silhouettes for the women and strong, masculine silhouettes for the guys – but with feminine edges. 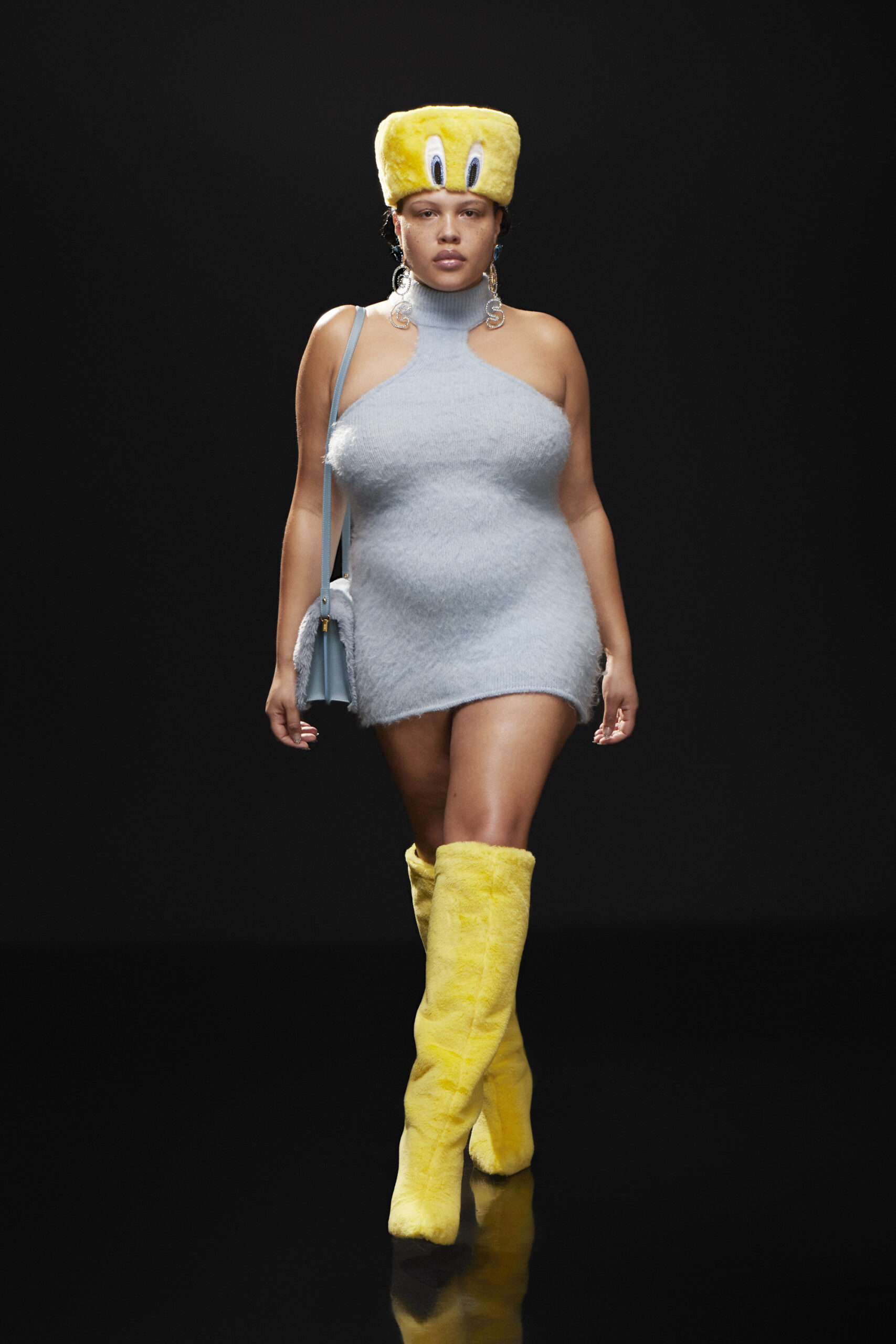 The GCDS collection was also skewed towards the younger generation but this time with a little more irreverence and daring mixed in for good measure.  Here there was a lot more skin on show, with cuts that shaped and framed the female form in tantalising ways.  The men also got the GCDS treatment with tops draped in a multitude of metallic, asymmetrically cut fringing and denim jeans in baby pink teamed with a lemon yellow, teddy bear fur bomber jacket.  The dreamy and surreal show video – complete with the staged aftermath of a head-on car crash (you read that right) – is something to behold. 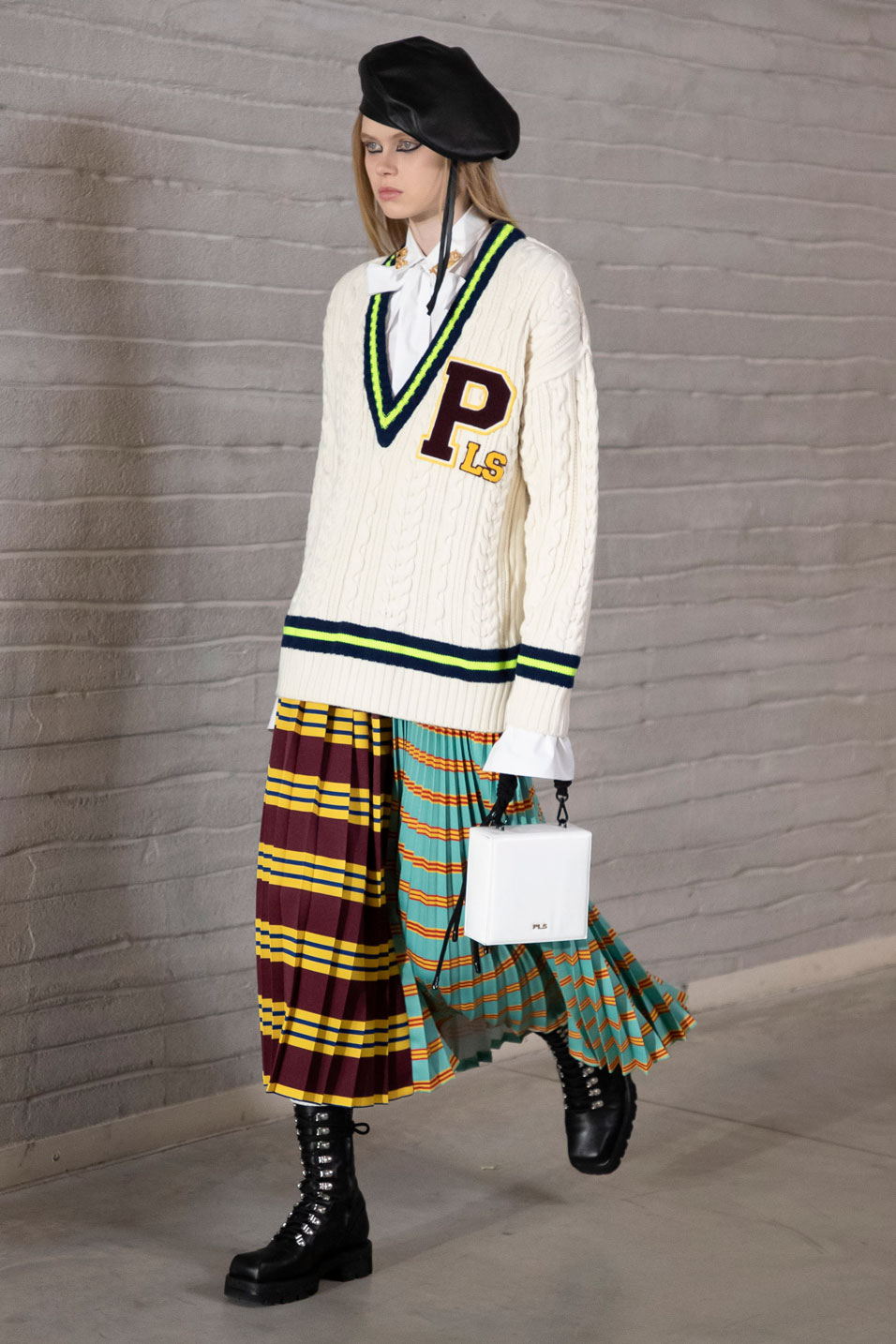 Lorenzo Serafini took Philosophy to college with his American ‘preppy’ look for A/W2021 – but re-imagined it in new, contemporary shapes and modern, sometimes edgy, but always innovative silhouettes.  Echoes of revolutionary military styles also make an appearance.  All which provides a stark contrast to the carefree artist style of his summer collection for 2021.  Shot in studio, the show film is buoyed by a driving 80s beat soundtrack complete with visual effects taken from the era.  The graphic presentation worked to set the stage for the graphically pleasing styles coming down the ‘catwalk’.