London Fashion Week A/W2021 became the third digital masterclass in a row for the British fashion Council.  And, by now, most of British fashion were beginning to look like veterans of this new era, with innovative show presentation films that told stories, revealed character, showed the personalities of the designers behind the collections and brought together a wealth of new and established creative talent in new forms of collaboration.  What is also true is that, hopefully, this will be the last fashion week season that will be experienced from afar.  But it’s hard to imagine that the new normal, when it comes, will not bring with it this extra digital edge that has been honed and sharpened by so many over the past year.

With that in mind, we take a look at examples from ten of the best collections – and best presentations – from the past week. 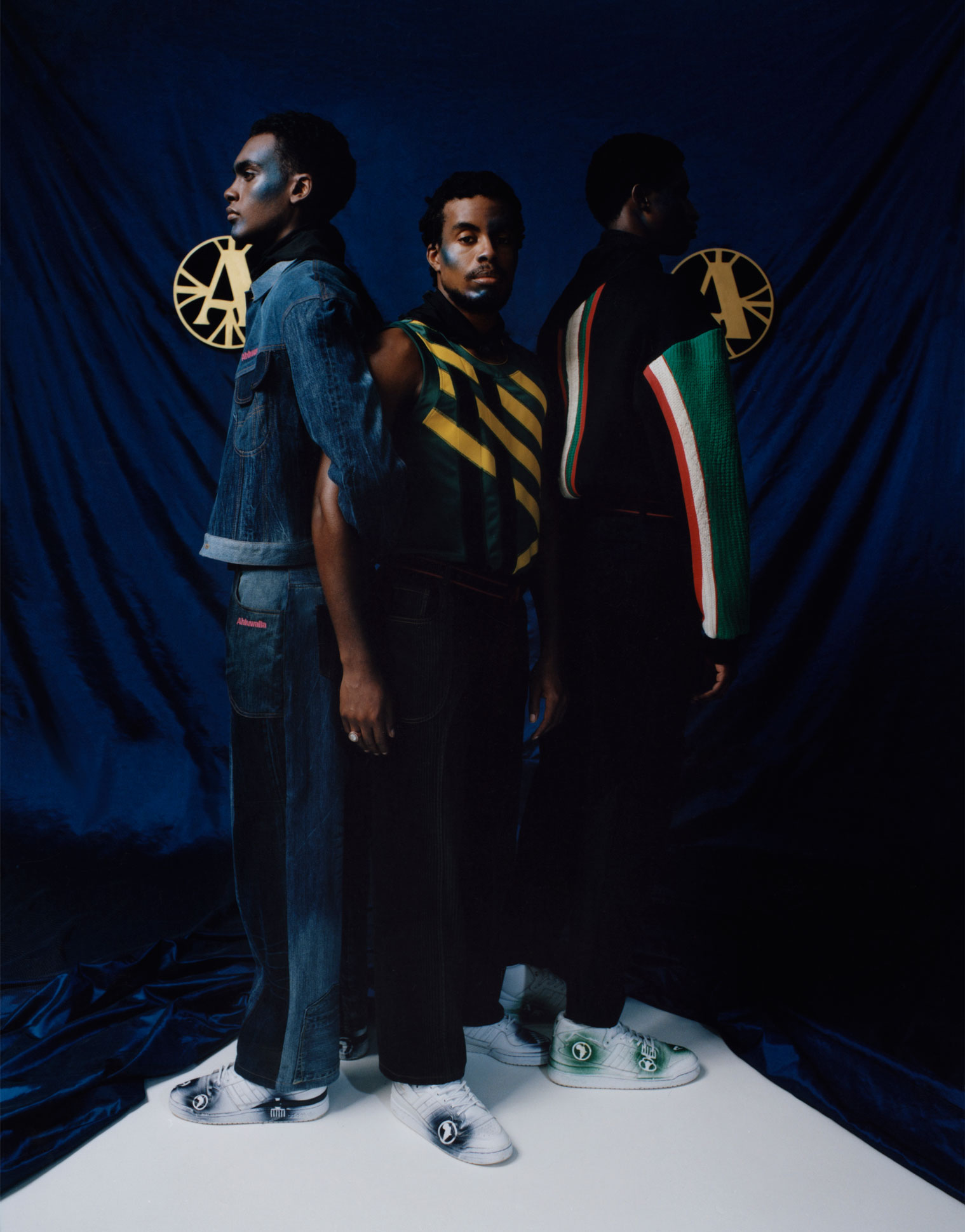 In a show film presented in collaboration with the musician CKTRL, we see the influence of the Harlem Renaissance that had become a part of designer Priya Ahluwalia’s life through quarantine and social distancing with the book Home Going, by Yaa Gyasi.  Jazz is the soundtrack to the combination and synchronisation of colours, textures, fabrics and movement in this tight and meaningful collection. 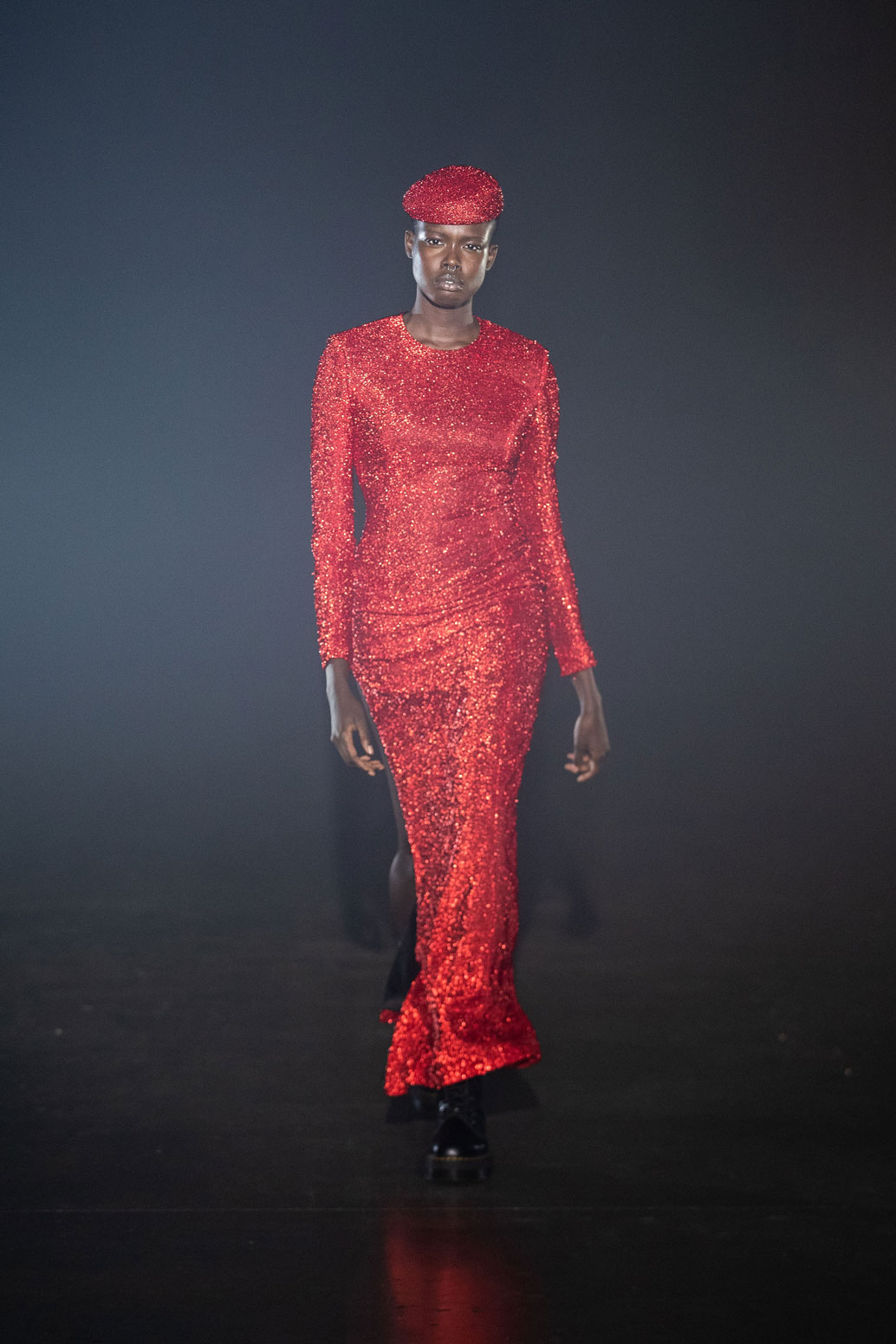 Eden Loweth’s show film was another drama filled affair, with models gliding out of the darkness and into the light to the sound of urgent orchestral strings.  To match, there was also the ambient drama of this being Loweth’s first collection as sole creative director at the label.  Playing into it all were the looks from the collection – black was the dominant colour with lots of gender-neutral cuts and designs juxtaposed with strong military overtones and the occasional touch of dystopian glamour in bold colours. 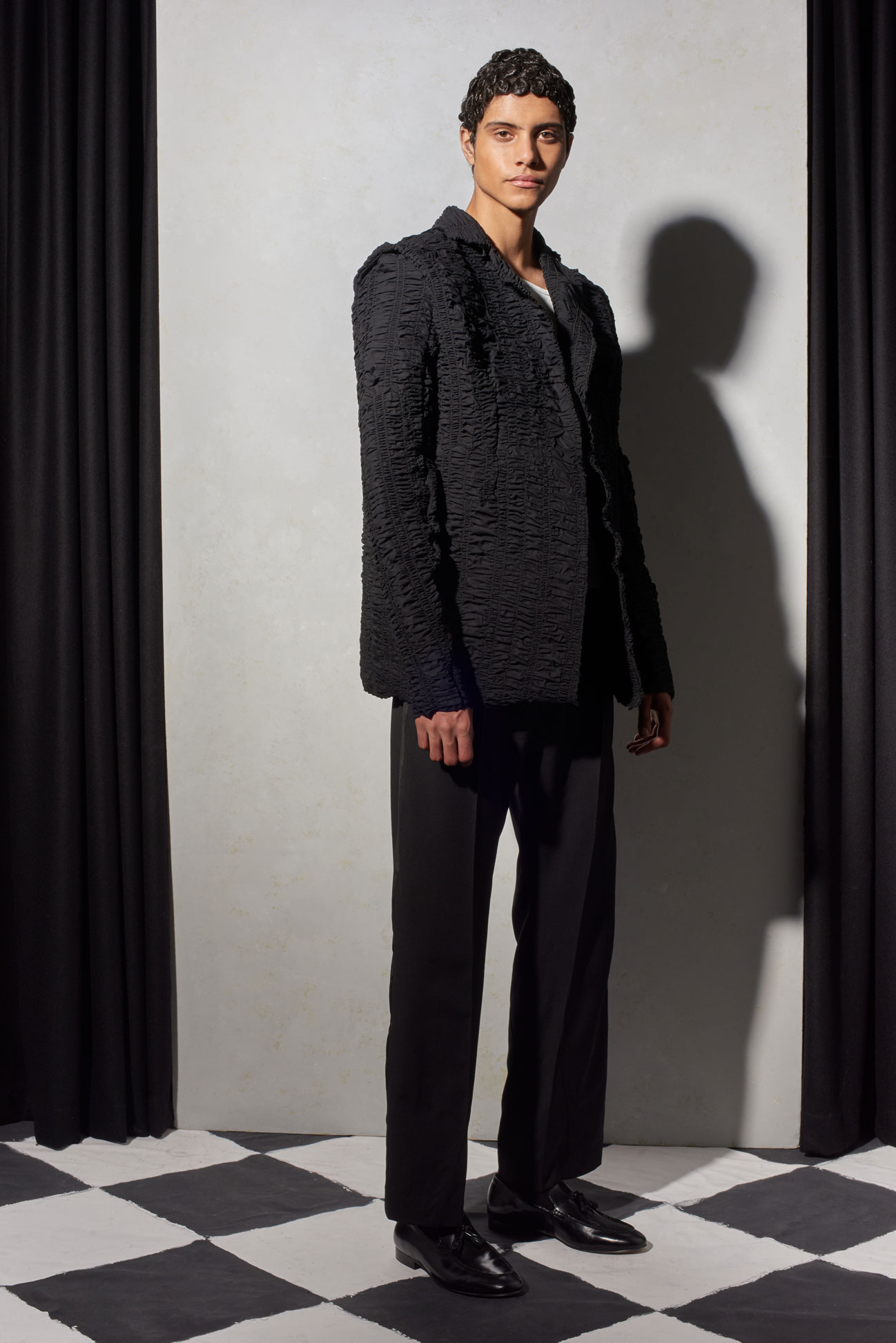 The Bianca Saunders show film almost served as a quick sneak peak.  As you’re just about to get drawn in by creative visuals and eerie sounds, it’s gone, leaving you wanting more.  What is clear is the influence of sculpting in her collection, with knitwear and trousers ruched and twisted in ways to create unique and compelling silhouettes.  The ‘Bianca Saunders shoulder’ is also refined even further on the jackets to consolidate her now famous signature. 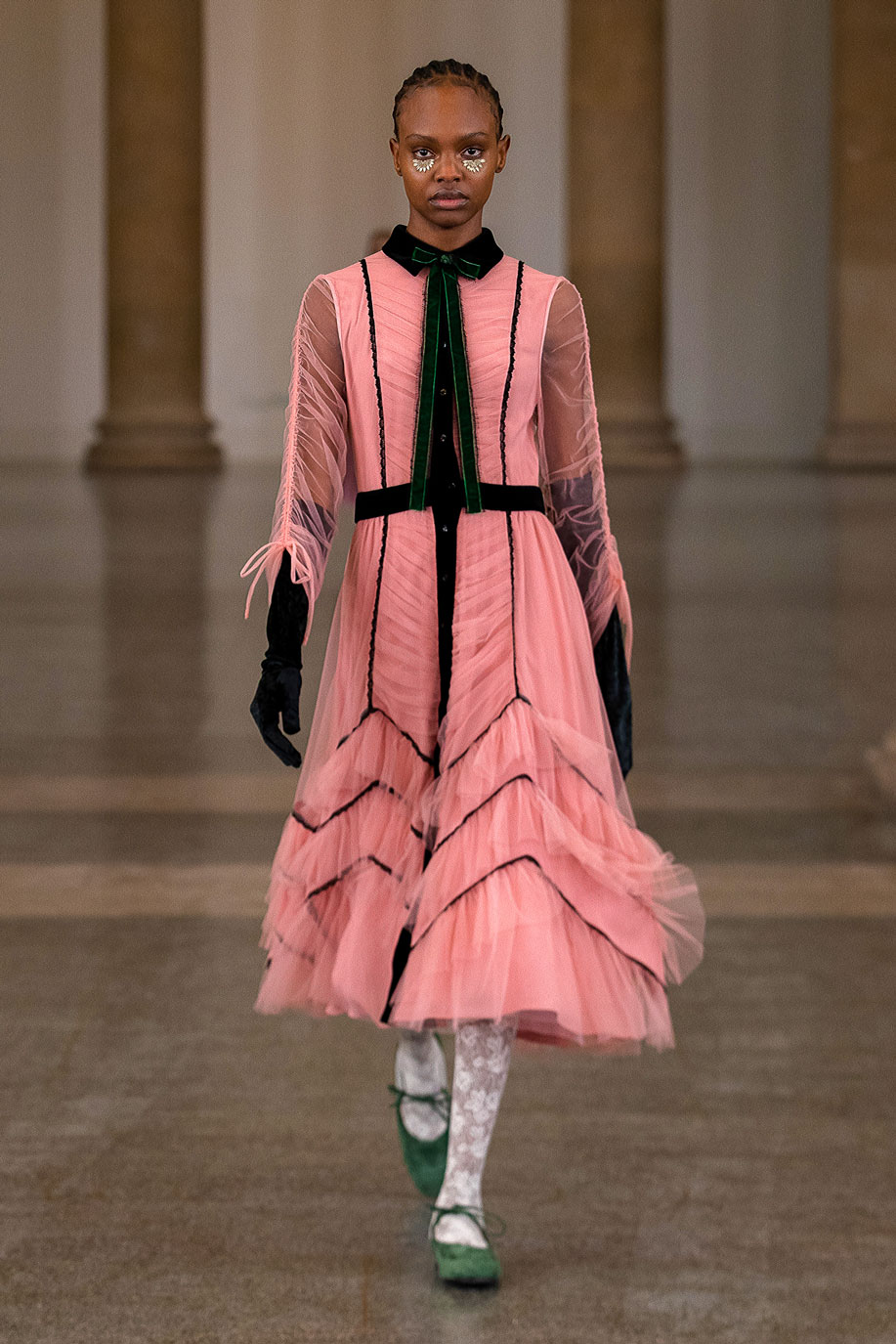 Bora Aksu’s winter sees a return to the softness, new confidence and femininity of late 18th and early 19th century revolutionary France.  Taking particular inspiration from the life of mathematician and philosopher Sophie Germain, Aksu injects a note of masculinity into his suiting and boxed cashmere coats – as Germain had once injected her femininity into the exclusively male dominated areas of scientific research of her time. 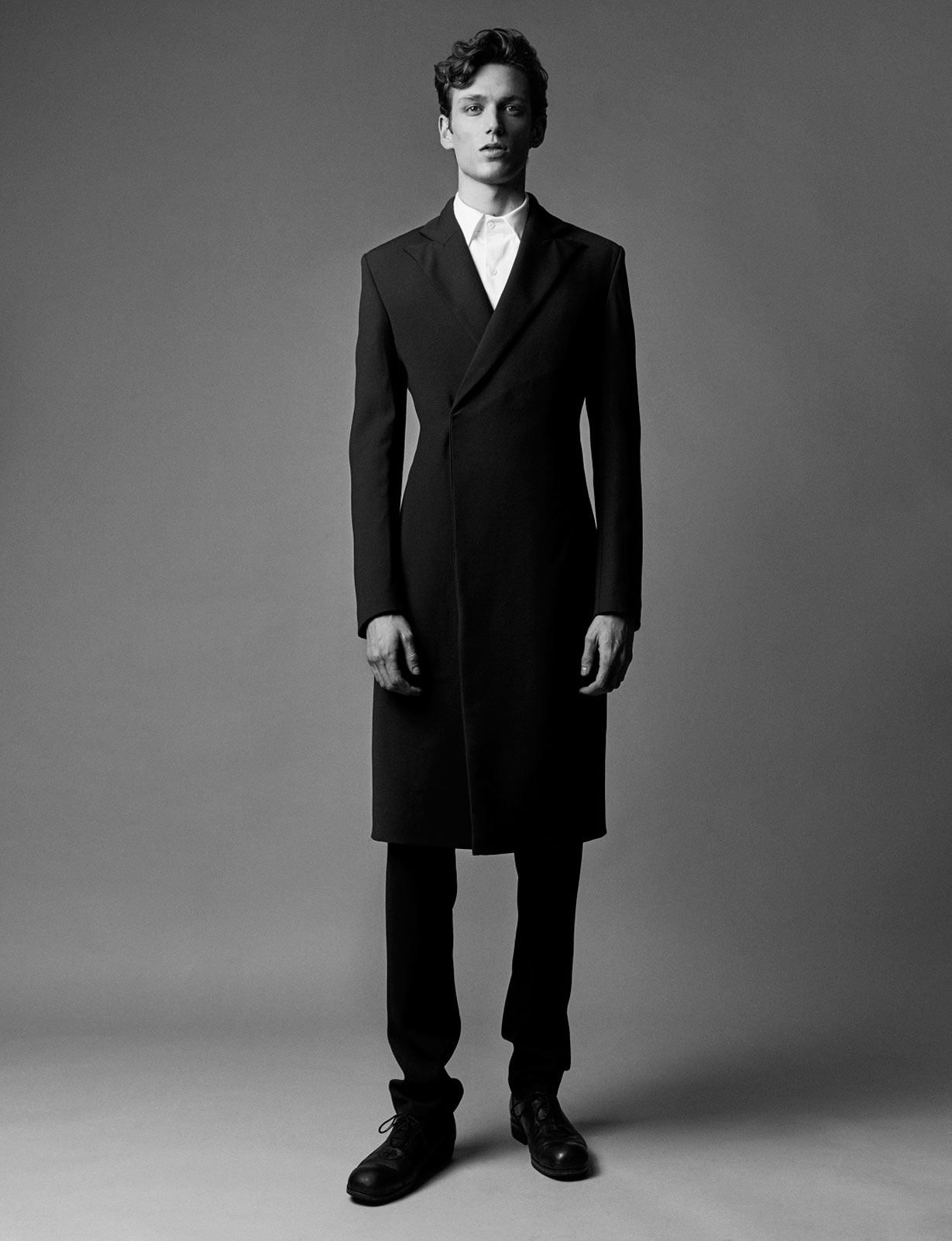 Velendra’s show film was more an interview piece, with Velendra himself asking questions of people in the public eye that are close to him as a designer – while they wear his new collection.  The collection itself continues his fascination with taking tailoring for men right to the sharpest edge, while adding in unique signature elements – like sleeveless long coats or short capes draped across the shoulders – all in standard Velendra black and white. 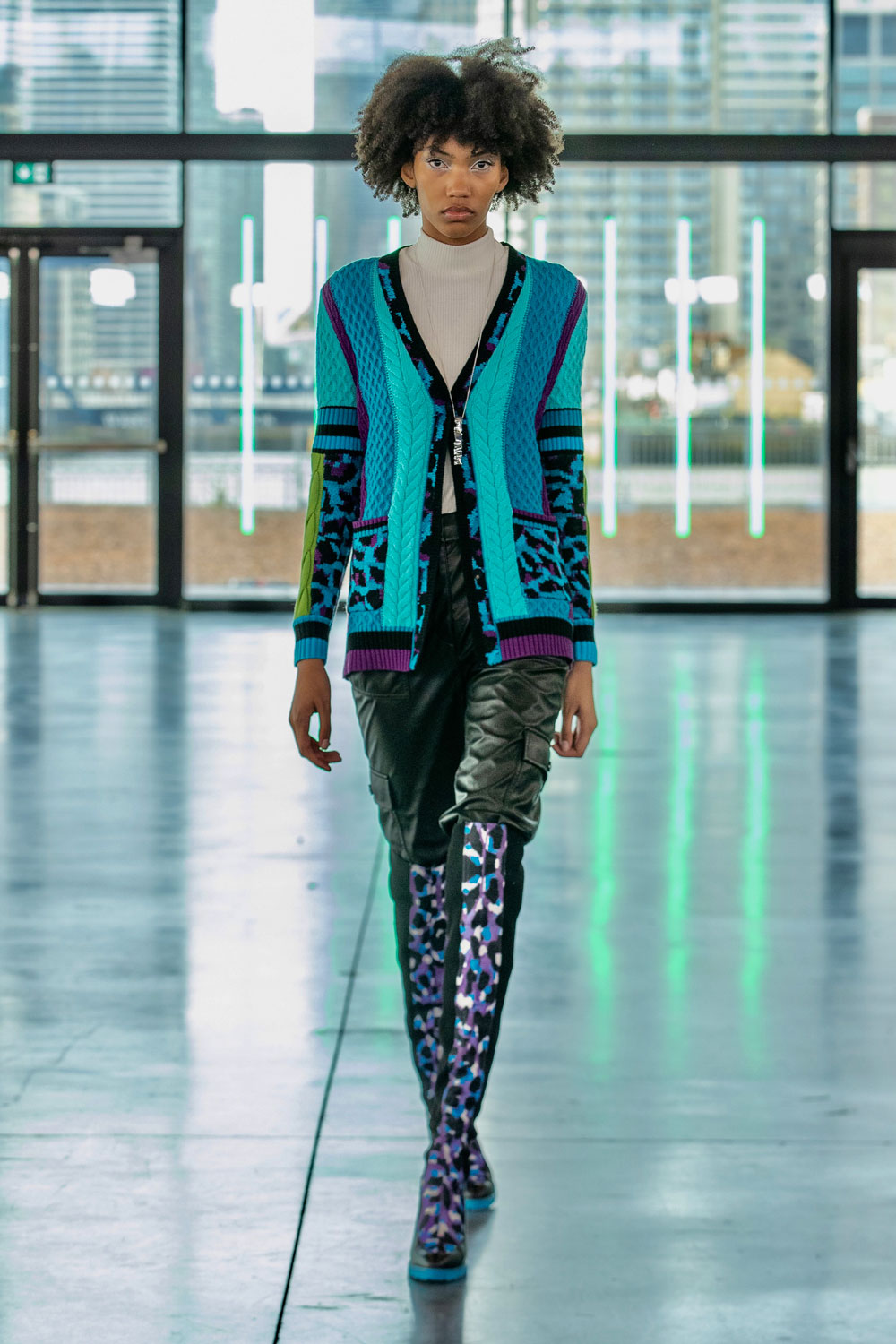 The Mark Fast show was almost unique at LFW in that it was the most like a traditional fashion show put to film.  The collection itself was young and fun, with lots of different styles and silhouettes combining to paint one picture.  Short checked miniskirts with riding boots and cardigans or glamorous, ankle length pencil skirts teamed with equally glamorous, oversized shaggy wool knitwear in pinks and reds told its own stories. 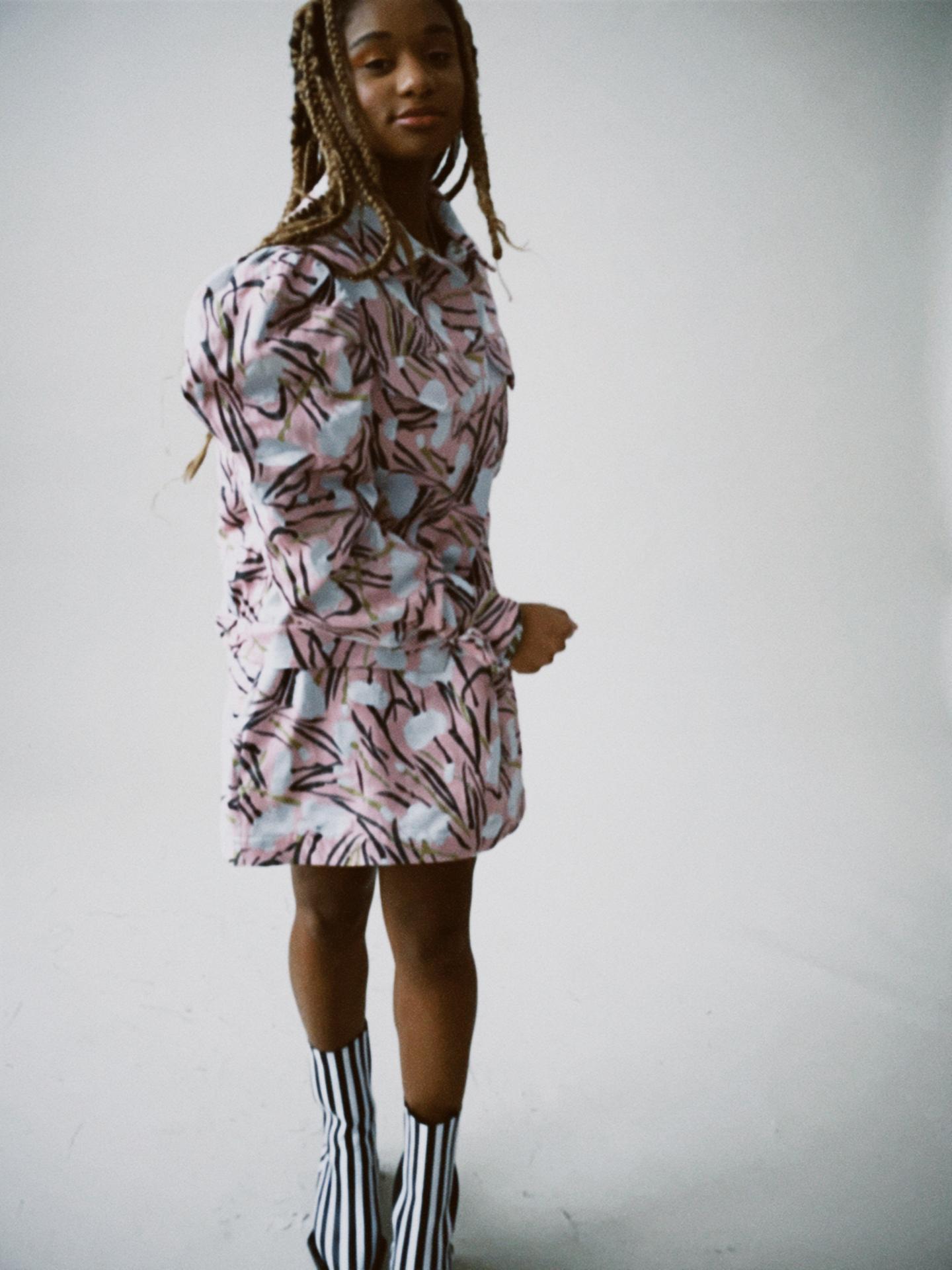 Marques’Almeida’s film presentation took the form of a performance by fellow Portuguese compatriot and recording artist, Nenny.  The collaboration between the artists worked to enhance both at the same time – the bright, bold colours and unique constructions of the M’A pieces on display meshed perfectly with Nenny’s intricate vocal/rap style and syncopations as she performed new songs for the camera.  Young, fun and contemporary. 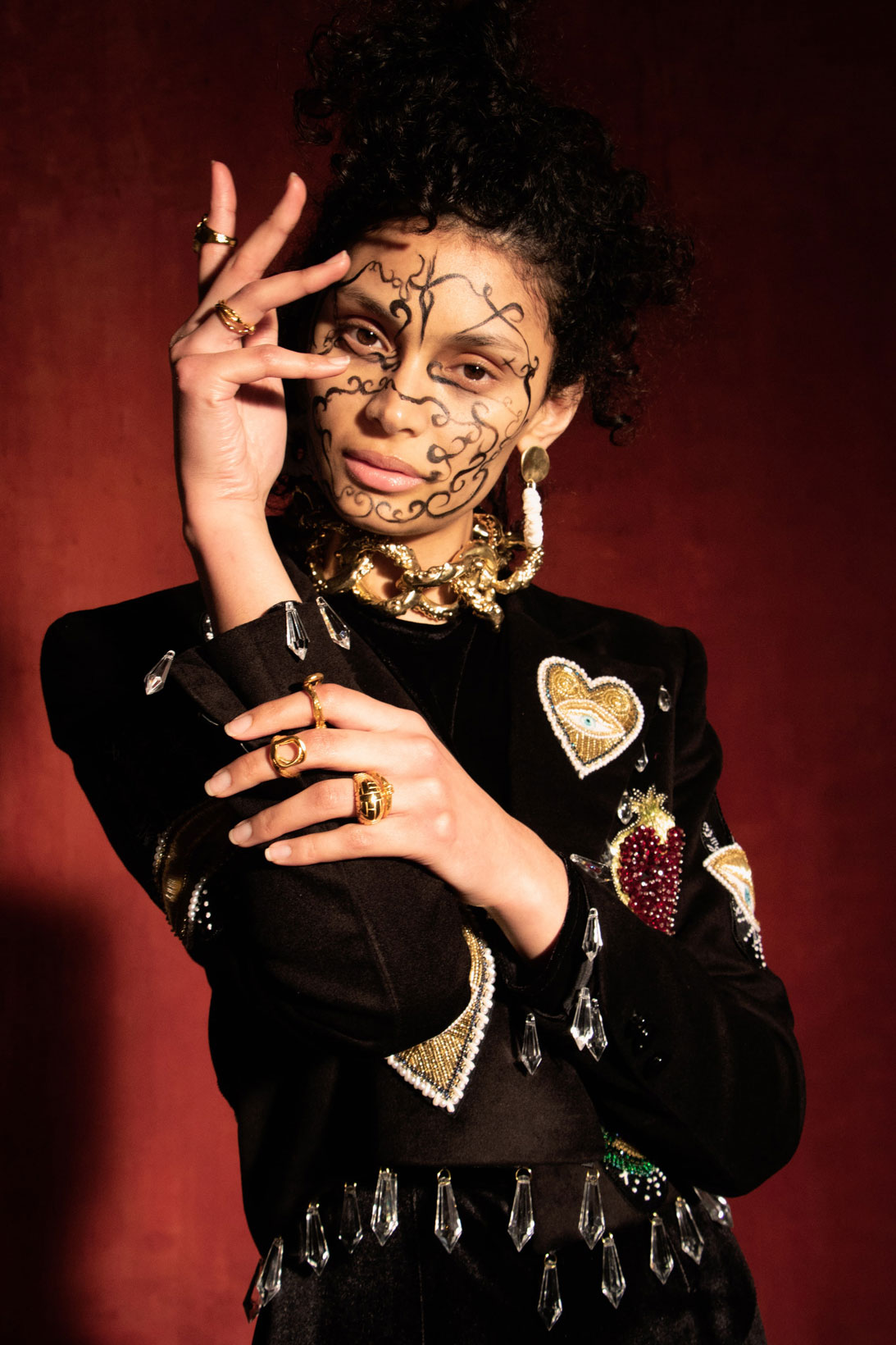 Osman Yousefzada’s show film spanned continents, with footage from London, St Vincent in the West Indies and Pakistan, with the idea being to show a shared value system of healing across the world.  The collection itself also travels through one of the stops along the famous Silk Road,Uzbekistan, where artisans can spend up to 50 hours creating one of his coats in intricate, exquisite detail. 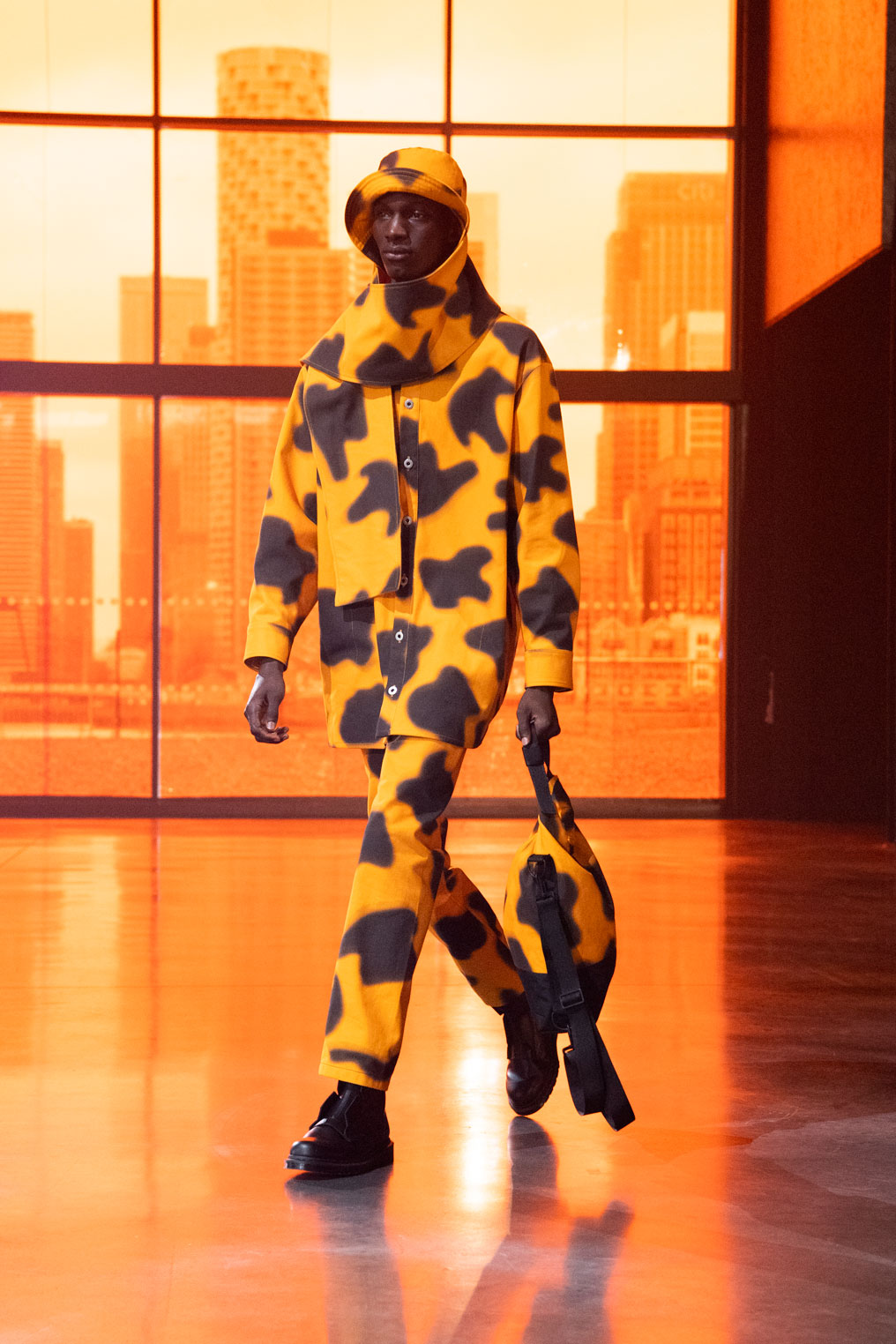 The clean, masculine silhouettes and sharp cuts of the Qasimi collection were some of the first things to jump out at you with their show film, We All Live Under The Same Sky.  The dancers who modelled the collection also served to show off how well the pieces moved with the body as they twisted and gyrated through their choreography.  Also of note were the rich, solid colours like purple, cumin and copper that invoked exotic Yemeni culture. 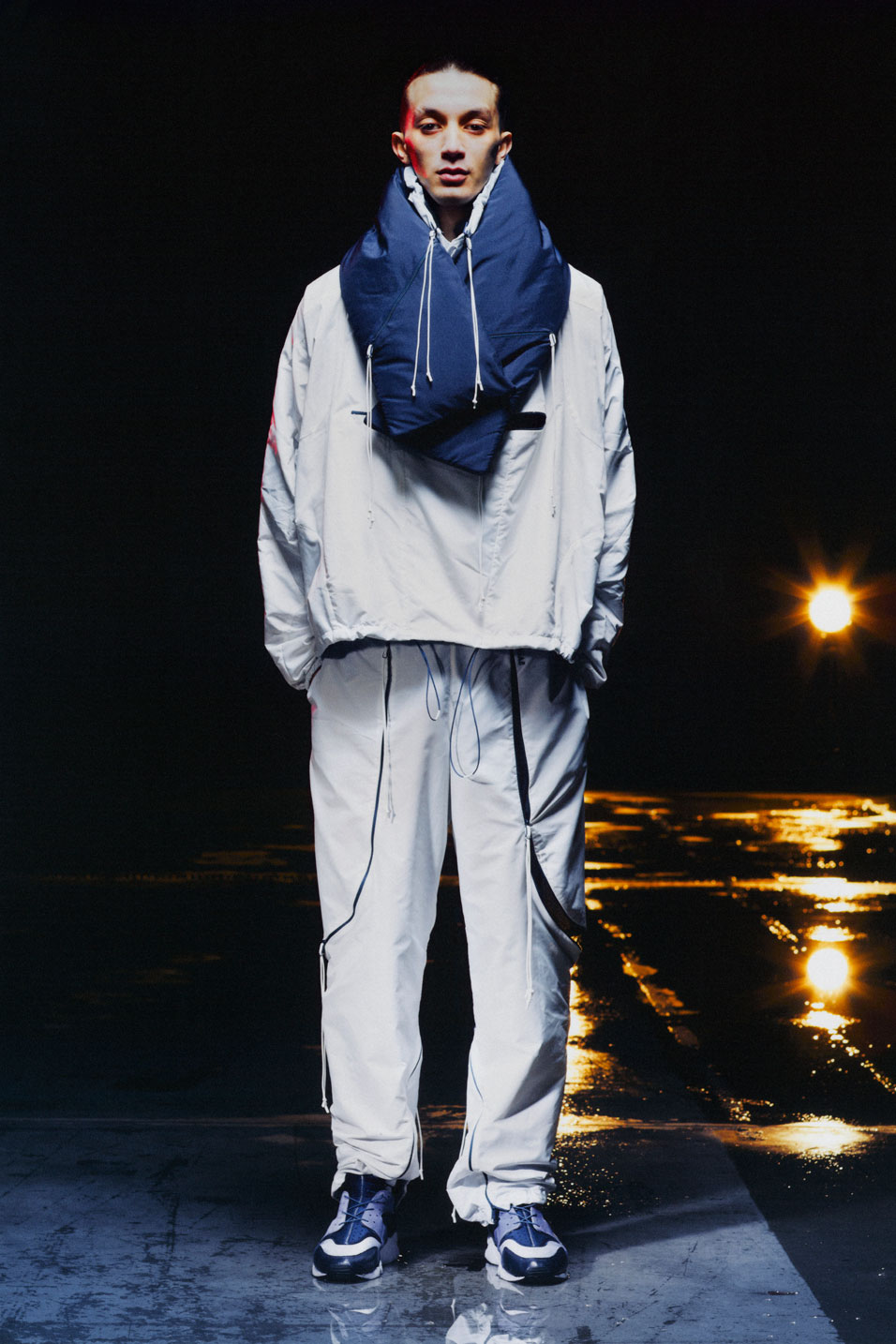 The Saul Nash show film was a perfect opportunity for him to showcase his particular style of urban street wear and sportswear – with a twist.  Street culture is represented throughout with easy wearing pieces featuring unique cuts and embellishments like unusually places zips with long, string tags and flashes of bold colours in discreet places. 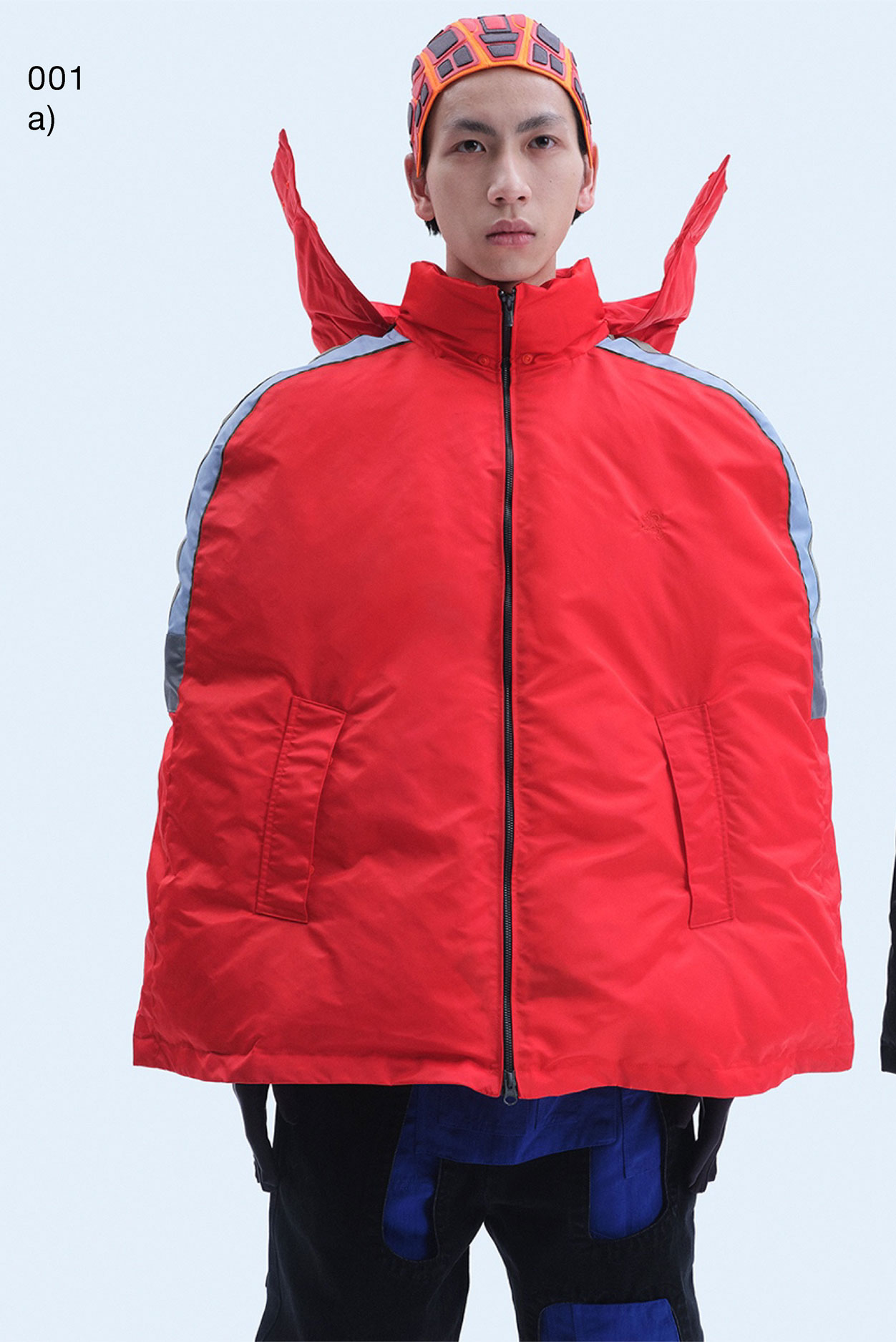 Xander Zhou leaned heavily into the digital with a show film that had a distinctly futuristic/A.I. feel to it.  This feeling was matched by the futurism of the collection itself.  A muted colour palette punctuated by shocks of bold colours, unusual cut-outs and patches and unique pieces – like the arm-less jackets – were perfect for a collection cleverly titled Update.