Paris Fashion Week S/S2022 has come to a close, rounding out this season’s womenswear events, shows and presentations from the ‘Big Four’ fashion capitals.  In comparison to the consciousness of London and the defiance of Milan, however, Paris was a fashion week that blended into the new global norm seamlessly.  With an event programme focused on exhibitions, interviews, aftershows and cocktails, La Fédération curated a week that leaned heavily into pre-covid celebratory convention.  Yet the post-covid digital/physical reality was omnipresent throughout Paris, with key brands such as Rochas, Dior, Balmain, Chloé and Saint Laurent opting for an invitation-only physical show with a digital livestream counterpart. 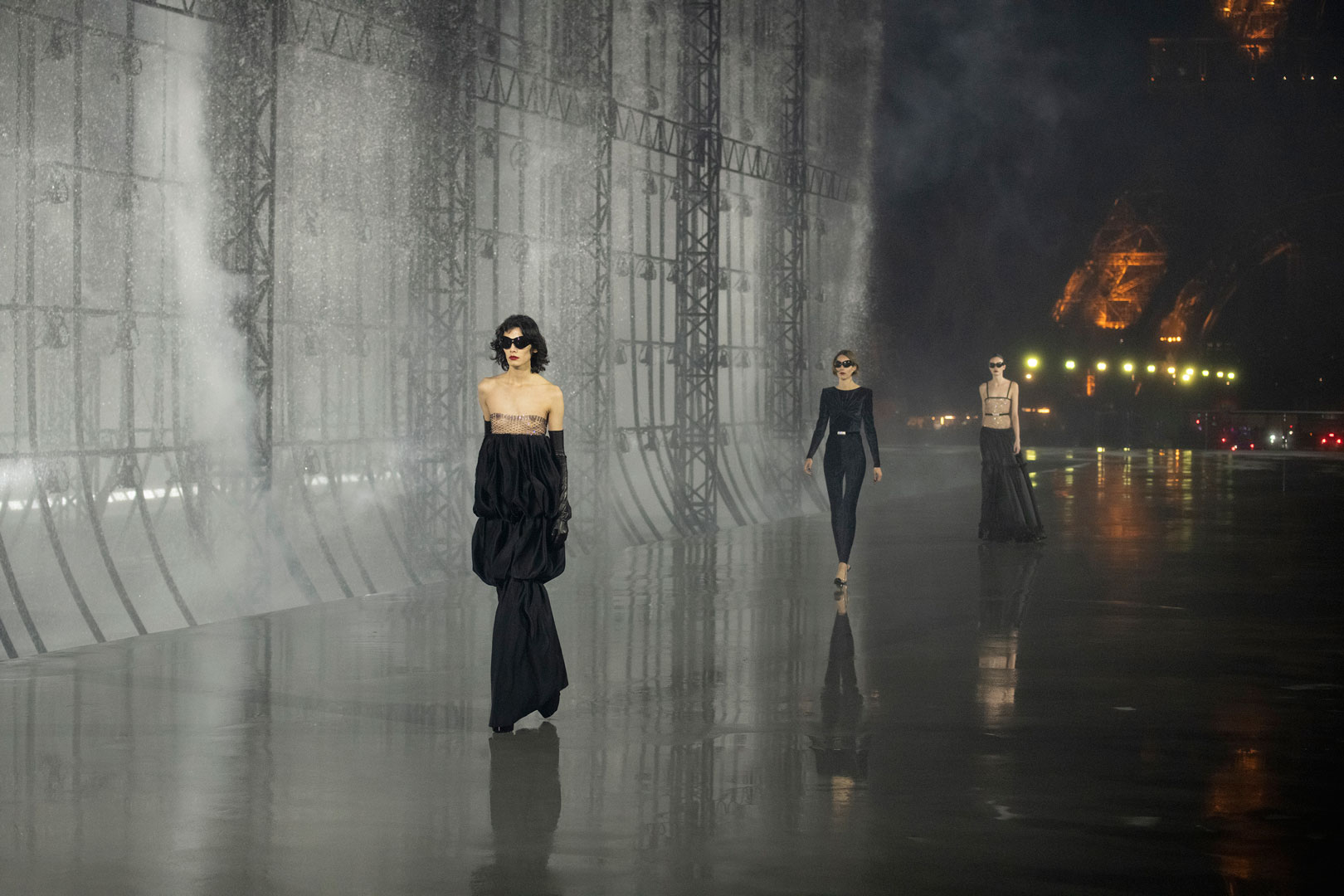 All shows and presentations throughout the week were designed as digital only, or with a livestream and/or digital component attached.  Global communication has quickly taken precedence as the importance of the international community to the success of new, emerging and established brands proves undeniable.  The importance of an intercontinental and multi-ethnic vision for the future of Paris fashion week was also apparent through the calendar’s online programming, as were leading events and presentations from Hong Kong’s Fashion Farm Foundation and the Arab Fashion Council.  Throughout the week unmissable moments flowed across the internet, from a Balenciaga themed Simpsons episode to a full blown Balmain Festival featuring renowned musicians, artists and chefs for a unique yet celebratory visceral experience.  Viral Twitter and Instagram storms reached new heights as most of us sat enviously at home with a burning desire to be back in the City of Light. 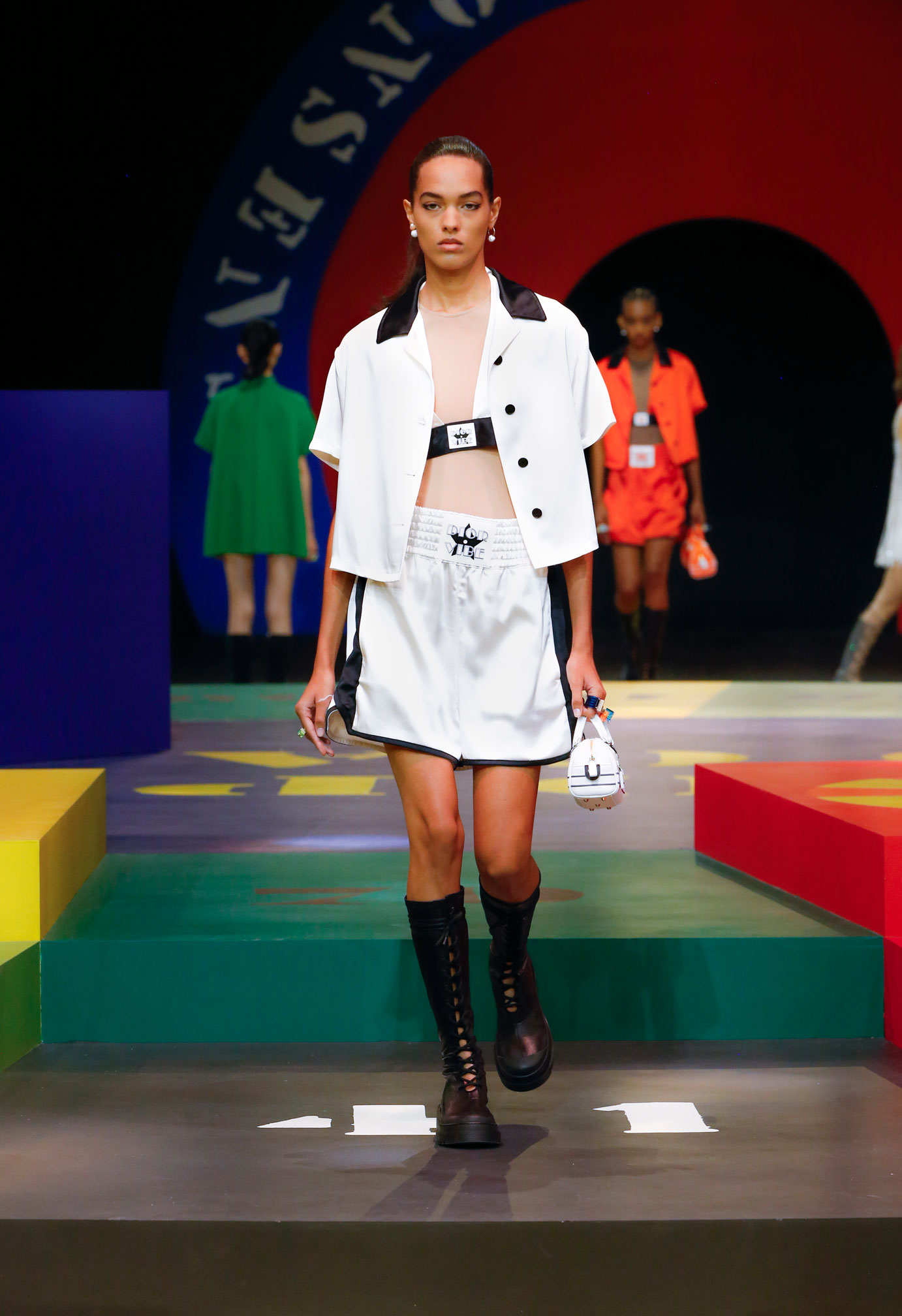 With a total 88 looks, Dior’s Maria Grazia Chiuri presented a refined collection that explored Marc Bohan’s distinct tailoring of the 1960s alongside new avenues of modern athleisure.  Held in the confines of Italian artist Anna Paparatti’s maximalist game show-esque scenic design, looks were at points contrasted with minimalist white tailoring, or exaggerated with colour blocking.  “I started this collection by thinking of the idea of the game,” wrote Chiuri, and the collection delighted when pushing for a more playful and whimsical approach.  Boxing kits were re-appropriated for high fashion attire, offering fresh perspectives on the sometimes overworked avenues of streetwear.  Matching bowling shirts, varsity jackets and parkas emphasised bold monochromatic looks. 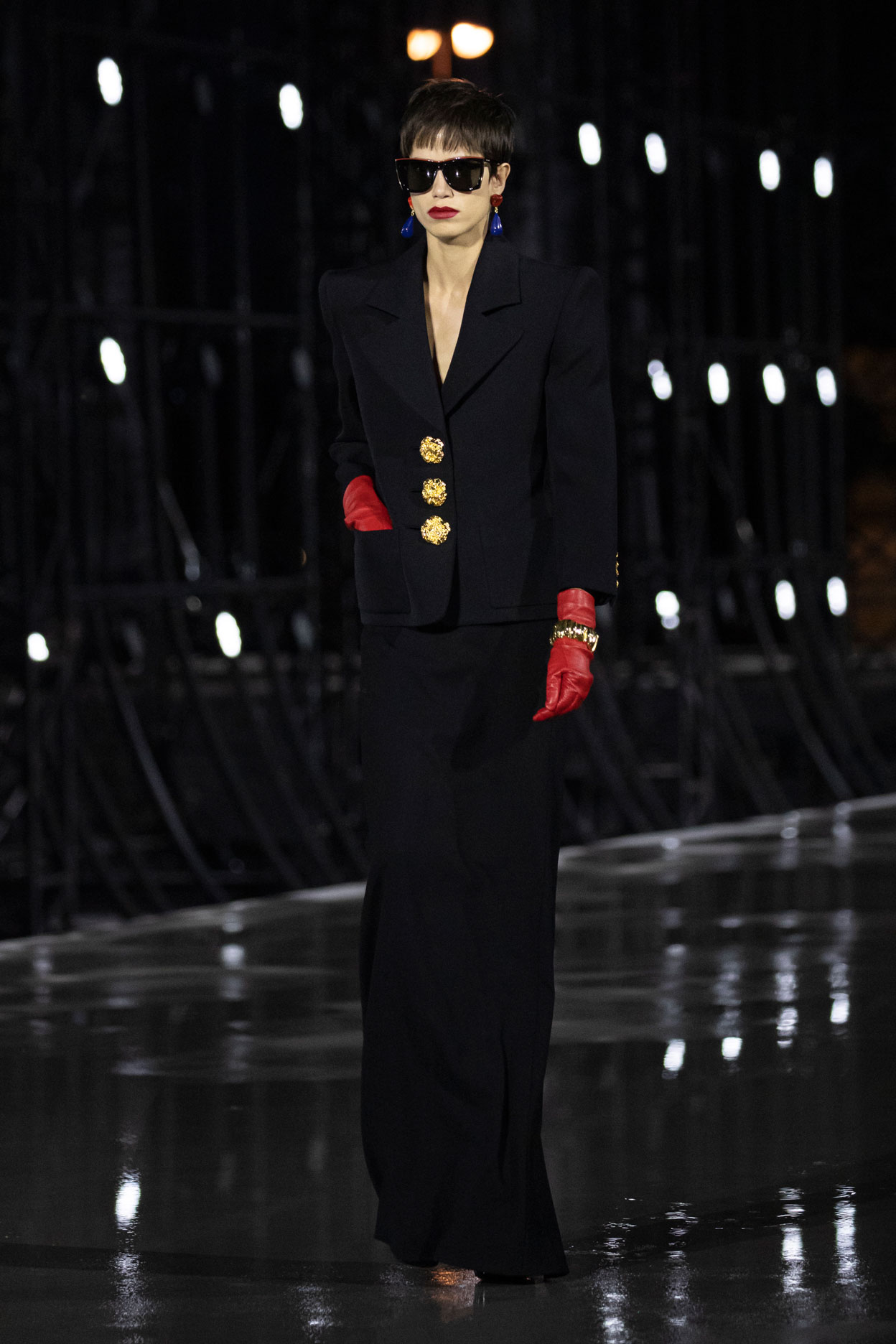 Vaccarello’s message for Saint Laurent this season was inspired by renegade designer Paloma Picasso, a collaborator and friend of founder Yves Saint Laurent known for her outlandish spirit, freedom of style and radical creativity.  Vaccarello synthesised Picasso’s cultural influence into a collection that celebrated the café society woman.  Black was the primary mode, paired across form fitting trousers and sharply structured blazers.  The body was celebrated in a call of subversive seduction, with geometric cutouts and plunging necklines emphasised by metallic ornaments inspired by Picasso’s own oeuvre.  Paloma red accents became something more, peeping out from below black sleeves and tucked into trouser waistbands; transforming accessories into meaningful gestures.  For Saint Laurent next summer, attire is the true tool of self expression and presenting yourself is the necessary art. 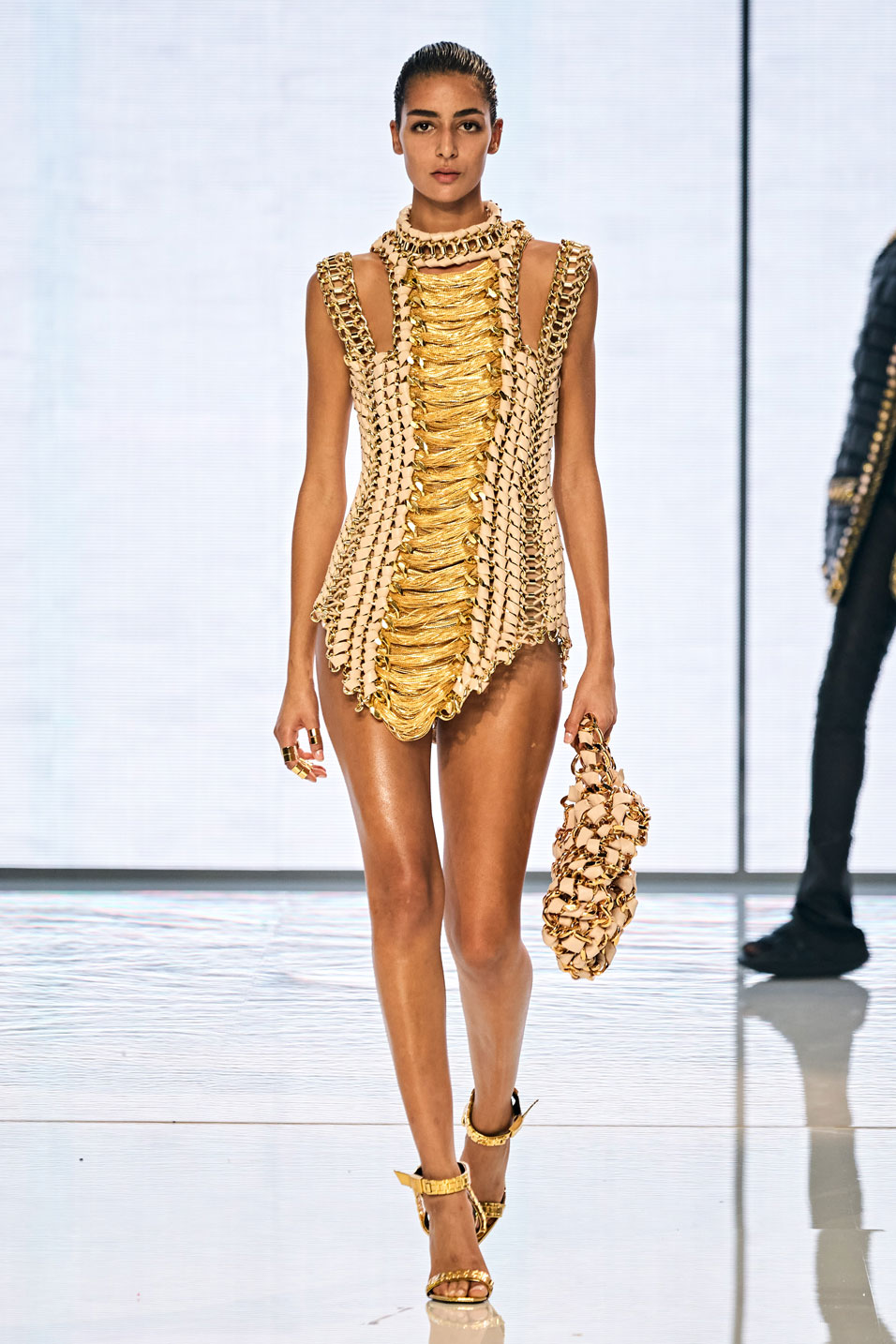 Re-editions of a handful of Rousteing’s favourite looks from previous seasons celebrated the designer’s ten year anniversary, alongside materials and shapes that represented Rousteing’s personal recovery over the past year.  Last October, a fireplace in Rousteing’s home exploded leaving the designer with a Spring/Summer season filled with hospital rooms, physical rehabilitation and gauze.  Remnants of this experience featured prominently, as dangling straps and deconstructed bandage dresses and suits dominated.  The designer’s own statement gold rings, once adopted by Rousteing alongside polo necks that hid scars, were transformed across fingers and bodies as Balmain’s renowned artisanship and the legendary Maison de Lesage ateliers adapted and created striking 3-D metallic draping. 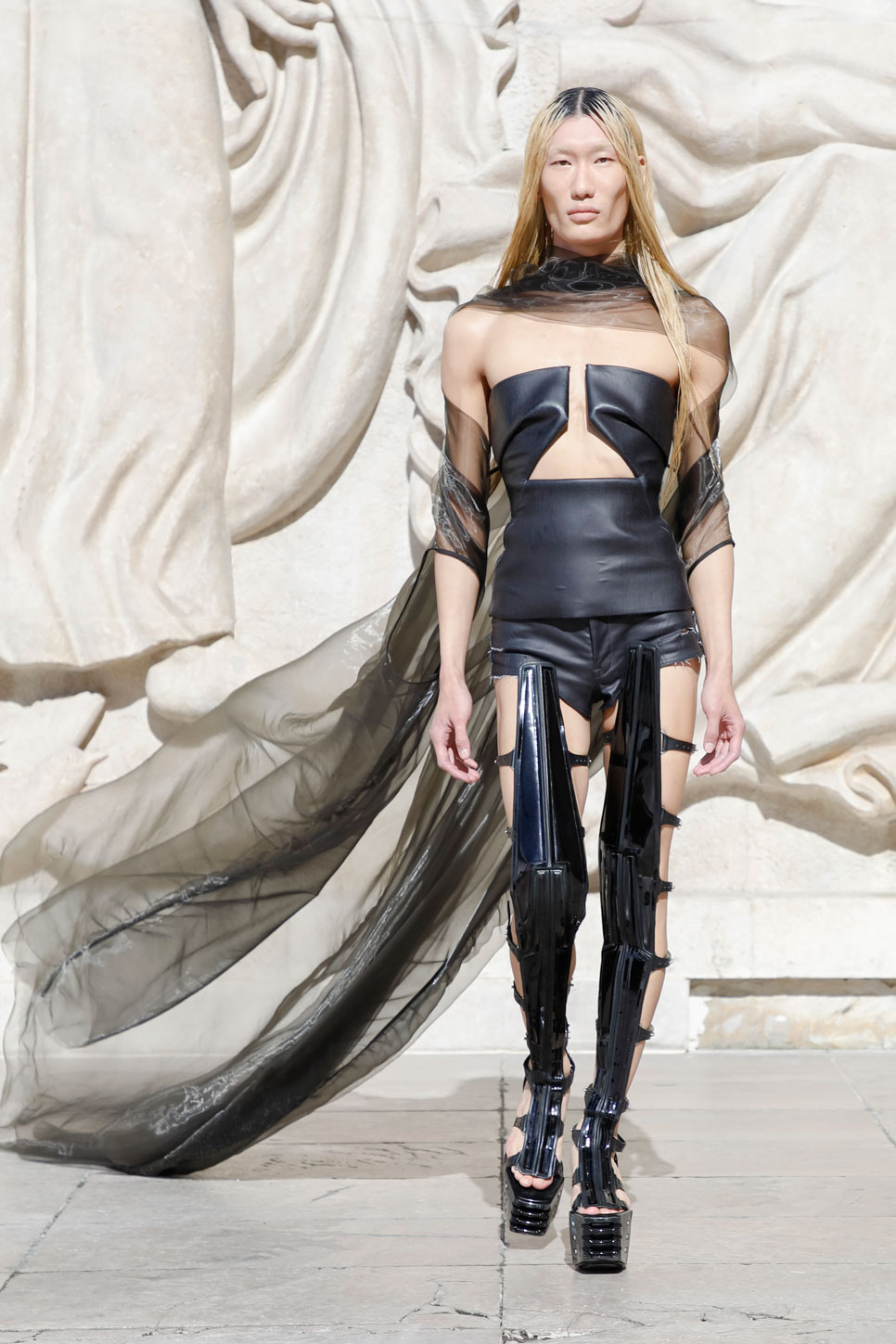 After livestreaming the brand’s last four fashion shows from the designer’s second home on Venezia’s Lido Beach, Rick Owens returned ferociously to the Paris catwalks in the Palais de Tokyo for his S/S2022 women’s collection, Fogachine.  A softer filter smoothed out the designer’s harder edges, as the collection’s titular inspiration flowed through floating nylon, modular-influenced tailoring and portable, non-toxic fog machines.  Sculpted bodysuit-esque co-ords provided varied options for avant-garde and casual wearer, with geometric cutouts emphasising the architecture of the female form.  Black matte lacquered stretch denim was paired with futuristic patent ebony and the clinging of wraps and capes to showcase the versatility of Owen’s achromatic palette. 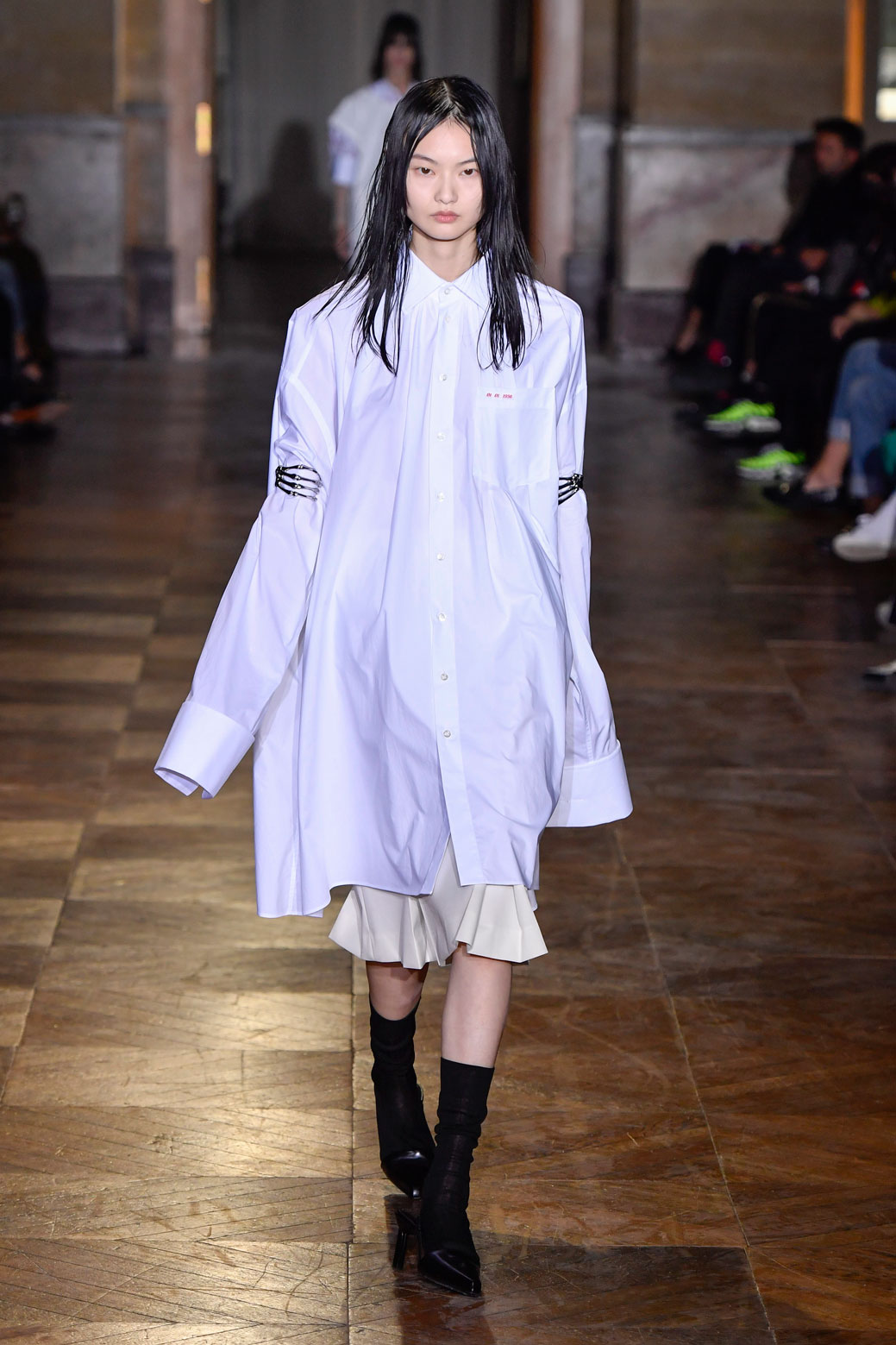 For this collection, preppy was recast through the absurdist lens of Raf Simmons.  Approaching next summer with a dramatic and futuristic reimagining of tailoring through a gender fluid silhouette, the collection did not disappoint.  Classic dress shirts were tailored in oversized relaxed fits and overwhelming bodies were in shapes reminiscent of children playing dress-up in their parents wardrobe.  Nostalgia took a turn for the abstract as vertically elongated sleeves were weighed down by enormous and exaggerated cuffs and delicate cufflinks.  It was in these moments that Raf Simmons truly excelled. 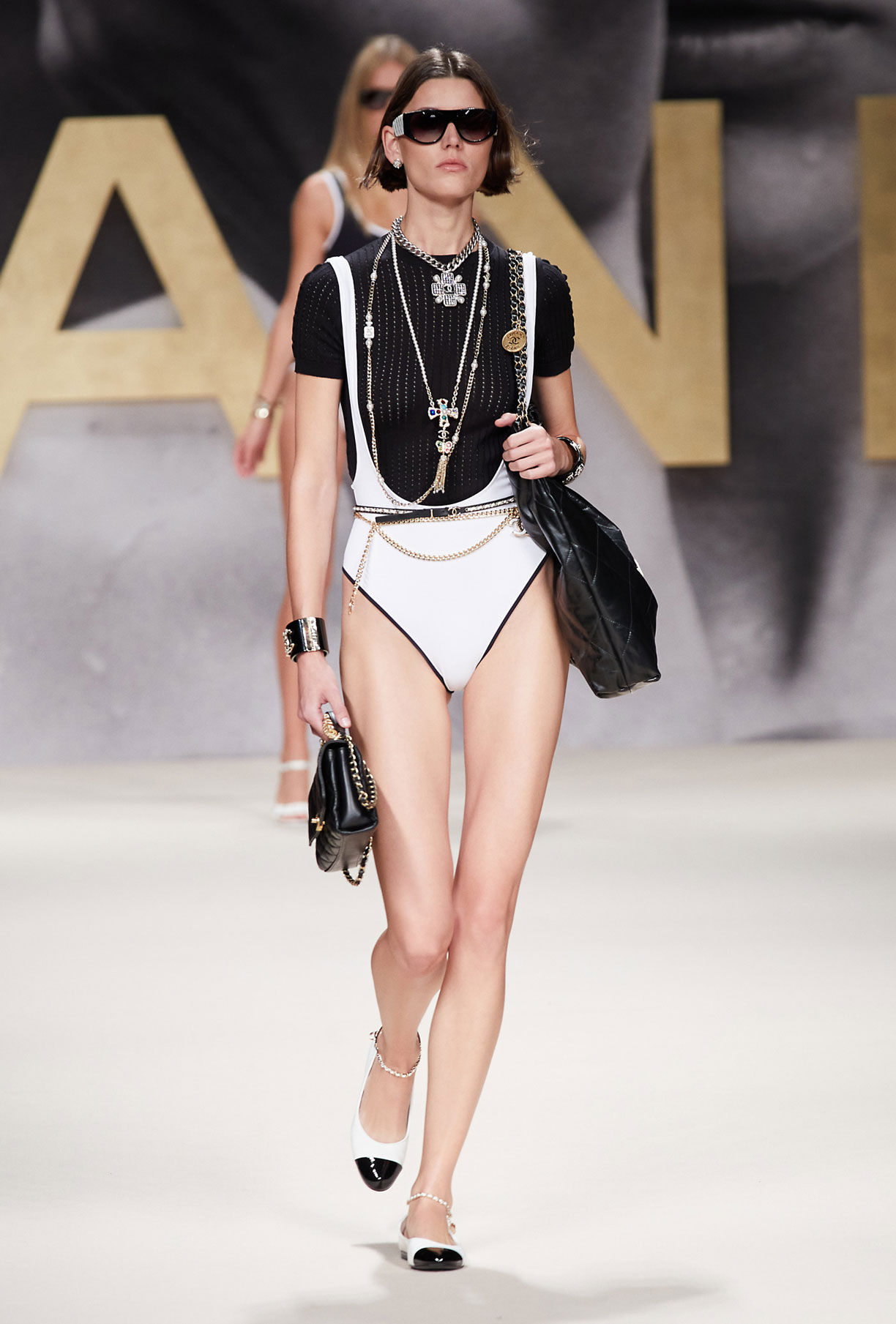 Virginie Viard’s vision for next Summer was reminiscent of the Côte d’Azur in its prime: decadent, monochromatic and transcendent.  Chanel’s swimwear took inspiration from ‘80s style leotards and modest yet classic one-pieces, in both dramatic metallic gold and the brand’s signature white with black trimming.  Large soft quilted totes accompanied matching mini handbags, as if prepared for a day of adventures in the heat.  Handles were adorned with the brand’s iconic gold chain detailing, coordinated with resemblant jewellery, belting and shoe straps.  Moments of cultural catholicism punctuated accessories adorned with Chanel’s signature monogram and this season’s butterfly motif; reminding us that, for Viard, next season is about the art of perception and of being perceived. 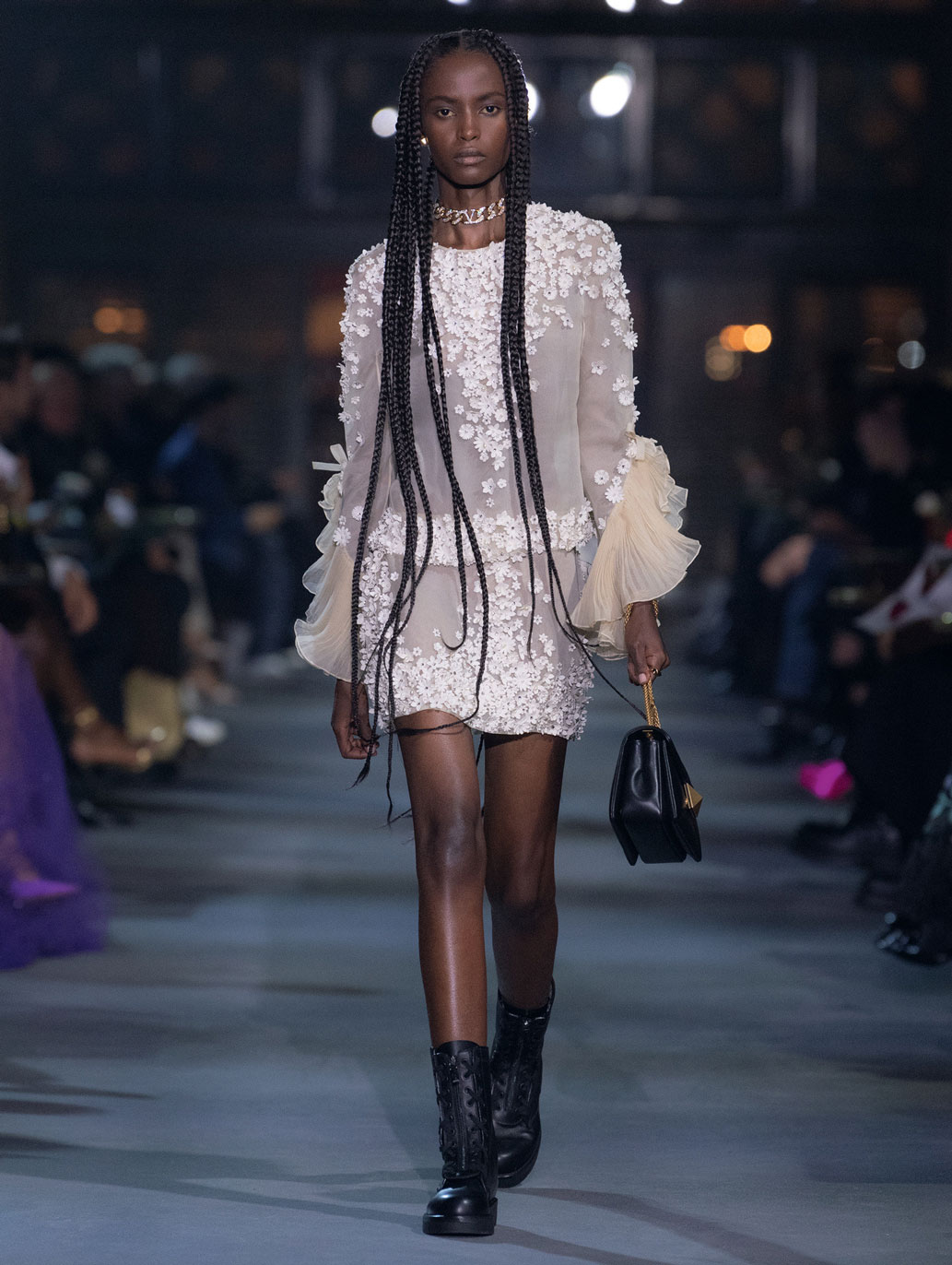 Detail was key for a collection focused on the transformation and resignification of the Valentino allure.  With Rendez-Vous, creative director Pierpaola Piccioli achieved the near impossible – rooting Valentino’s 61 year history in the contemporary modes of spring/summer 2022 and the unique individuality of the wearer.  Pieces from the Valentino Archive label showcased prime moments from season’s past, re-edited and transformed for the present day.  Facets of Valentino’s past flourished throughout the collection, as the taffeta of traditional couture was displaced alongside white shirts that ballooned and billowed with broderie anglaise.  Embroidery transferred seamlessly from outerwear to evening wear, and contrasted beautifully with the volume of the rest of the collection’s playful vivid palette. 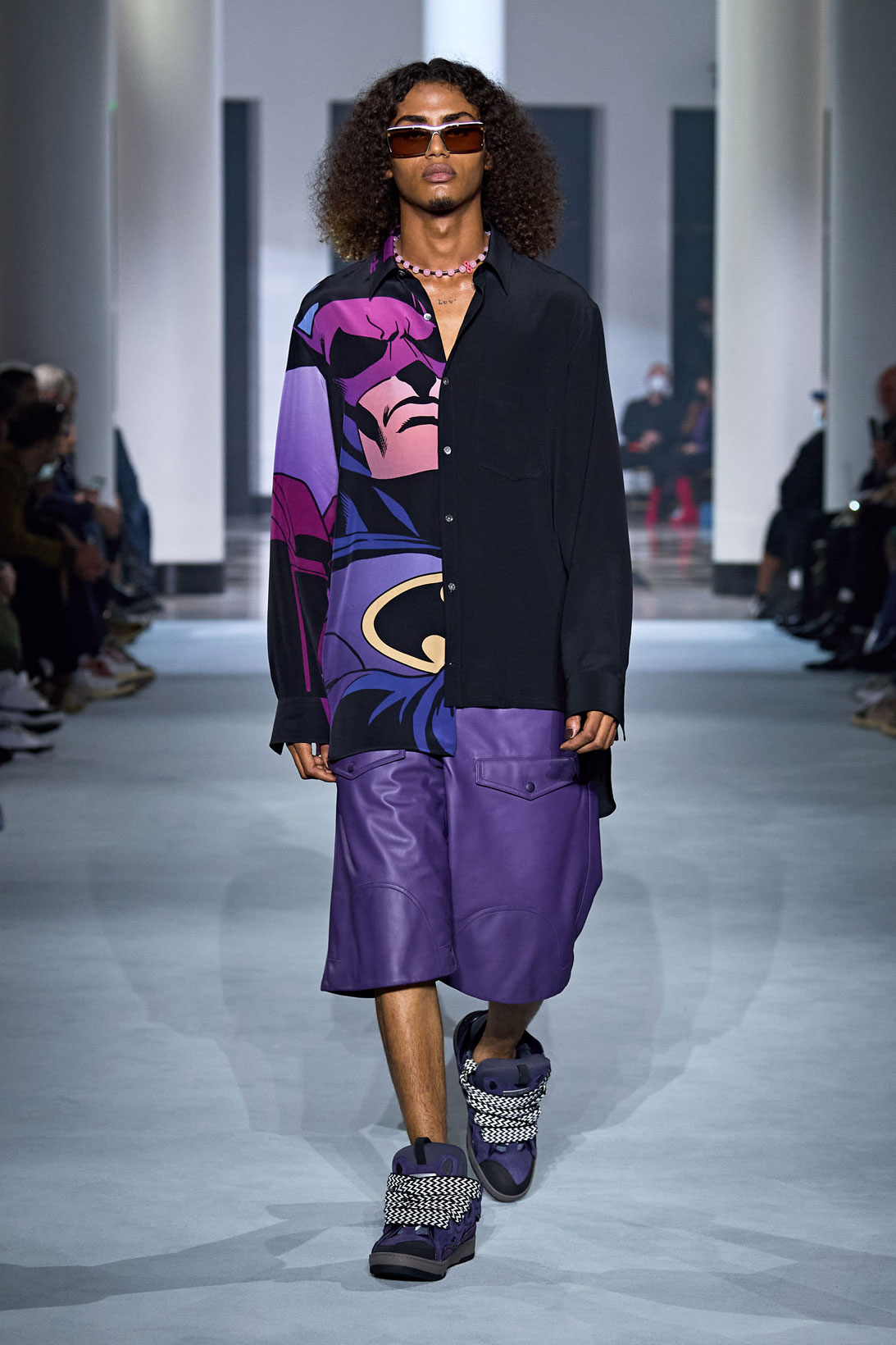 In a collection that fused the traditional Lanvin women with a new generation, Bruno Sialelli looked to the comic book palettes to infuse feminine silhouettes – such as the 1934 Concerto dress – with an edge.  Flowing voluminous dresses offered a welcome nod to the late Alber Elbaz, while pop colouring and colour blocking of saturated sea greens and vivid purples showcased a playful side to the floating drapes and shortened babydoll editions of the brand’s iconic Robe de Style.  Lanvin’s unexpected collaboration with Warner Bros. and DC provided the celebratory surprise of a collection that marked the centenary of the roaring ‘20s.  Images of classic DC comic book characters and scenes were transformed into prints and graphics, with the signature Lanvin Curb sneaker adapted with the pink hues of Batman’s face on the tongue.  The menswear expanded into genderfluid forms through relaxed suiting and skateboard shorts, offering a different speed and attitude to the sensual lightness of the womenswear collection. 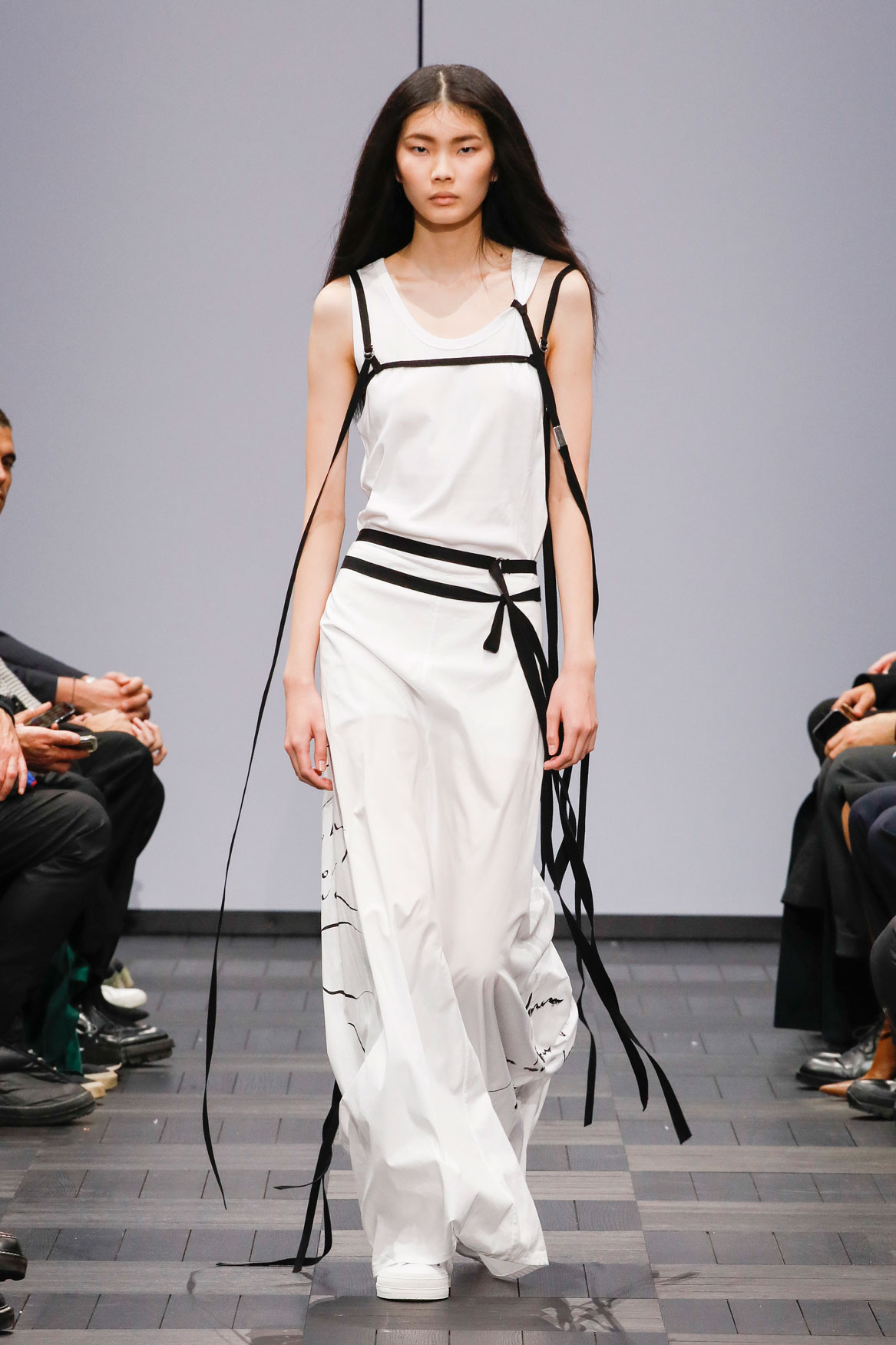 Belgian designer Ann Demeulemeester is a regular at Paris Fashion week, known for her black and white colour block tailoring and trademark design flourishes.  This season, Demeulemeester focused on the movement of black ink in lines of handwriting across white canvases; a reflection on the distinctly personal yet lesser used art of penmanship.  Inky ribbons floated and hung across blanched denim as sartorial suits and two-pieces in both black and ivory were undercut with white round necked T-shirts underneath.  The collection was most exciting when fabrics were marked not just symbolically, but literally with recreations of Demeulemeester’s own autograph on utilitarian forms. 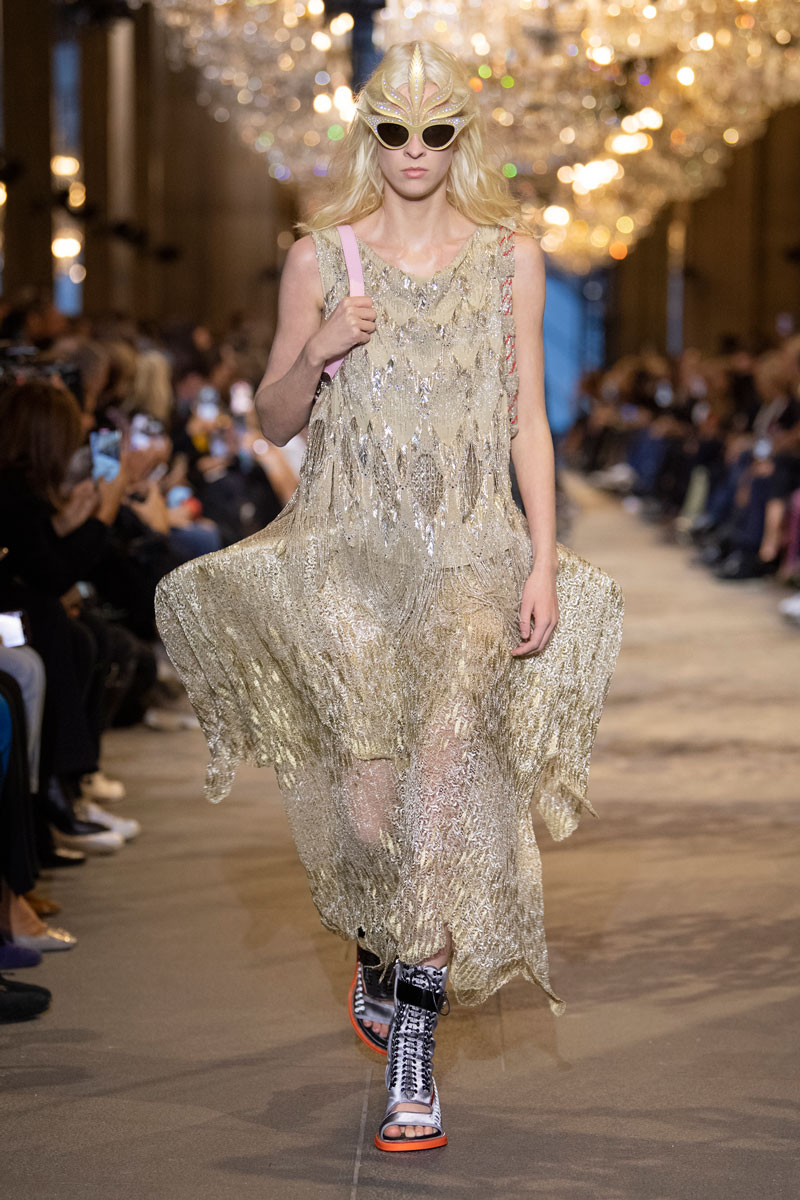 Nicolas Ghesquière wants the sunshine of the day to blend into the spirit of night, and for his clothes to offer us the potential to always do the same.  Tired of stringent classifications between evening wear and casual wear, Ghesquière instead spearheaded a collection that collapsed those boundaries of time, reinvigorating Victorian bustle and wide structured skirting for new contemporary silhouettes.  Boxing boots were transformed into open toe sandals, as seemingly innocuous cut outs at the top and bridge exposed a springtime athleisure sensibility.  Accents of acrylic colouring to the soles added intrigue to the muted evening wear palettes alongside colour clashing choices of handbags.  Ruff collars and wide balloon hips played with Shakespearean and Buffoon sensibilities, while light ruffles and layering ensured a sense of theatricality was felt even with the collection’s more understated lace silhouettes.

To read our round up of Milan Fashion Week, click here.