Following this season’s hybrid London Fashion Week that featured an almost 50/50 split between a digital and physical presence, Milan returned from isolation to firmly reestablish its status as a physical-first event.  Across seven days, 179 activations took place with a show and presentation heavy schedule that sprawled all across the city. Digital-only content accounted for a mere 25 percent of the programme. 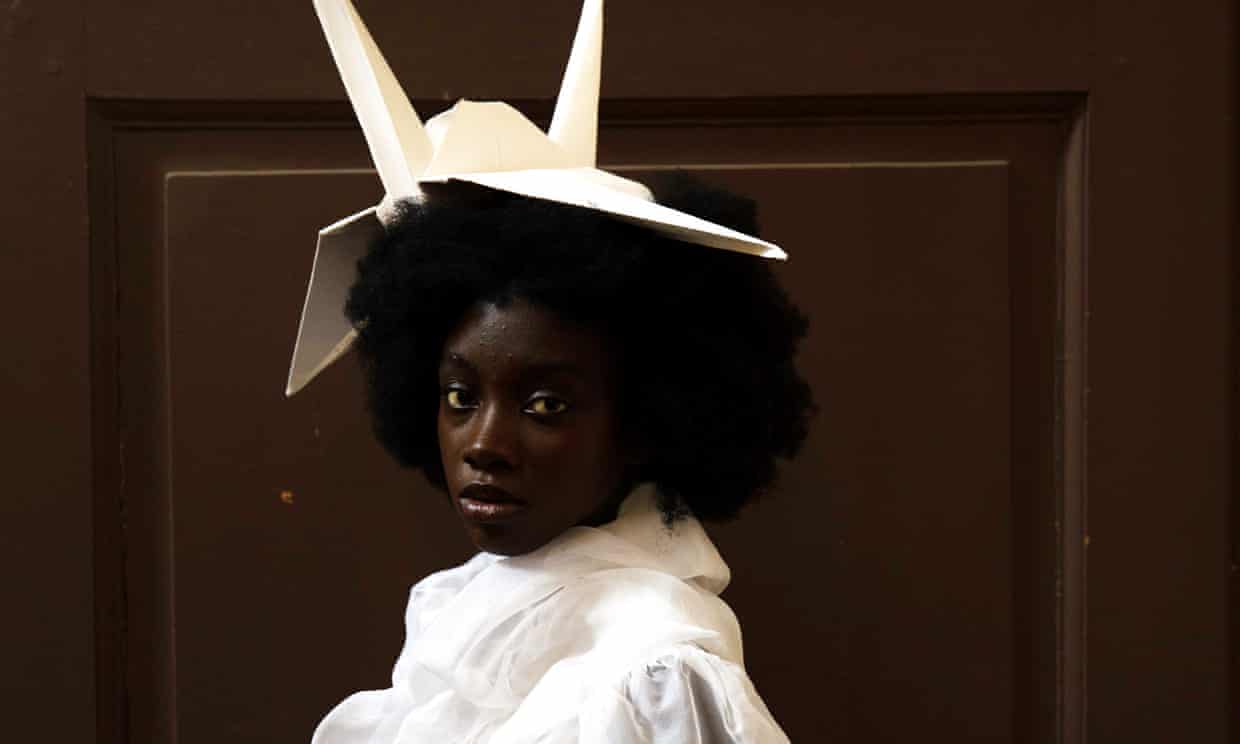 Fabiola Manirakiza for We Are Made In Italy

Extracting and defining its own unique identity, Milan opened with the digital return of ‘We Are Made in Italy’ from the “Black Lives Matter in Italian Fashion” collective.  With a critically-acclaimed debut in September 2020 and a second digital show this past spring, the collective returned once more to reaffirm its pride of place in the prestige of Milan.

While the week progressed toward it’s physical climax – a jam-packed Friday schedule and the unveiling of Fendace on Sunday – it was digital content that took centre stage for the denouement.  Alongside the schedule’s eco-political edge, fashion houses and designers focused on celebrating post-pandemic freedom, corporeality and the island paradise that has been so out of reach.  What dominated Milan this season was the overwhelming sense of undulated joy and celebration; a dynamic that flowed from the catwalks of London to the runways of Milan and will undoubtedly be a theme across the platforms of Paris this week. 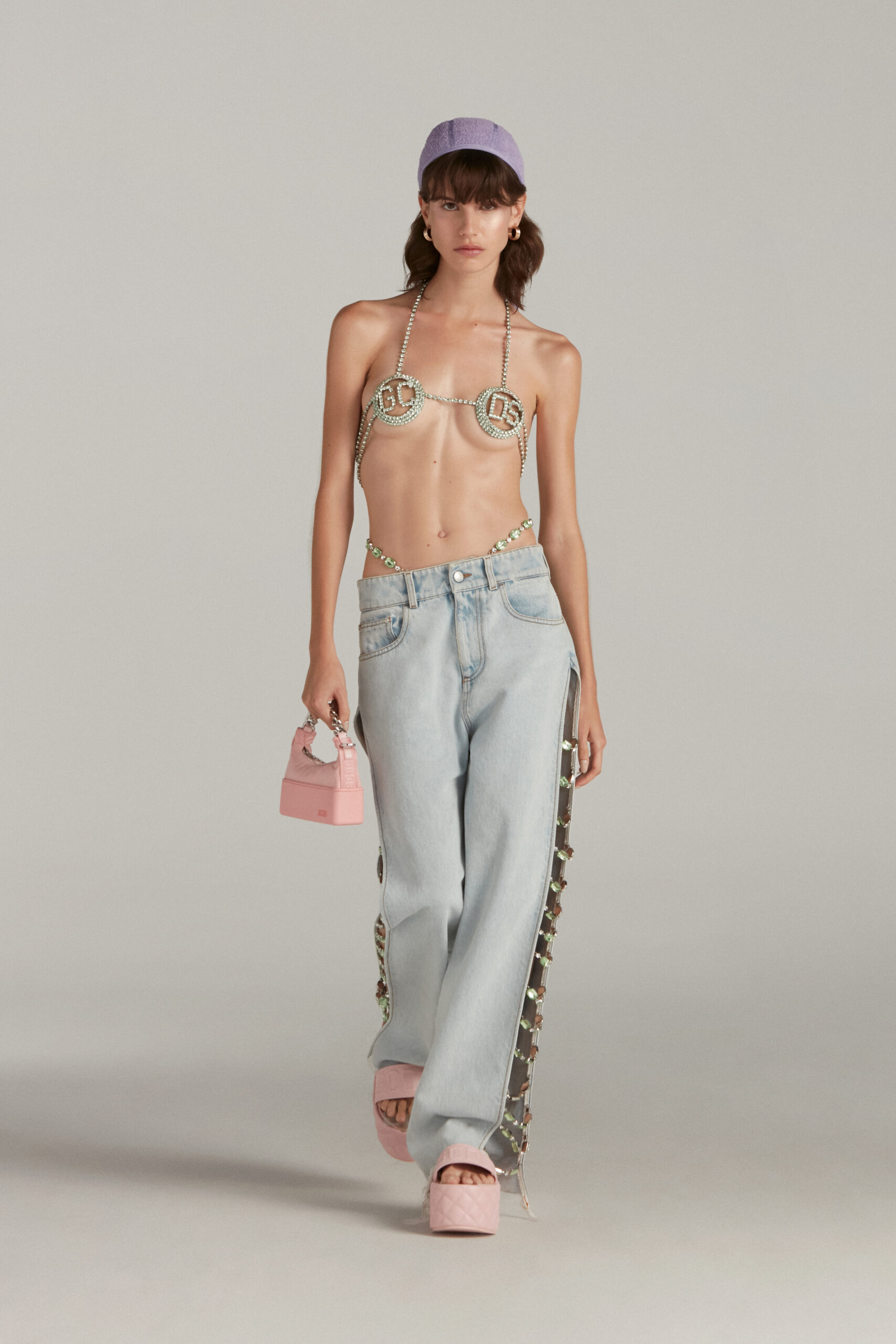 Expanding the horizons of the digital platform, GCDS debuted a futuristic runway fashion film, ‘Island Appropriate’.  Written and directed by GCDS visionary Giuliano Calza, the film was a fantasy fairytale inspired by Positano’s “age-old myths of mermaids and underwater garden worlds”.  The show presented an 11-minute style odyssey through red tinged sandy plains, urban minimalist sets and lunar landscapes, before ending face-to-face with the enveloping canvas of an ethereal sea floor.  For GCDS, the collection proved “a prologue to a bright new future”, with Ibex clogs made of recycled and compostable materials accompanying embellished dead-stock denim and the GCDS signature choker in a new form.  A paradise of relaxed hedonist freedom, ‘Island Appropriate’ is a virtual escape for the pandemic generation. 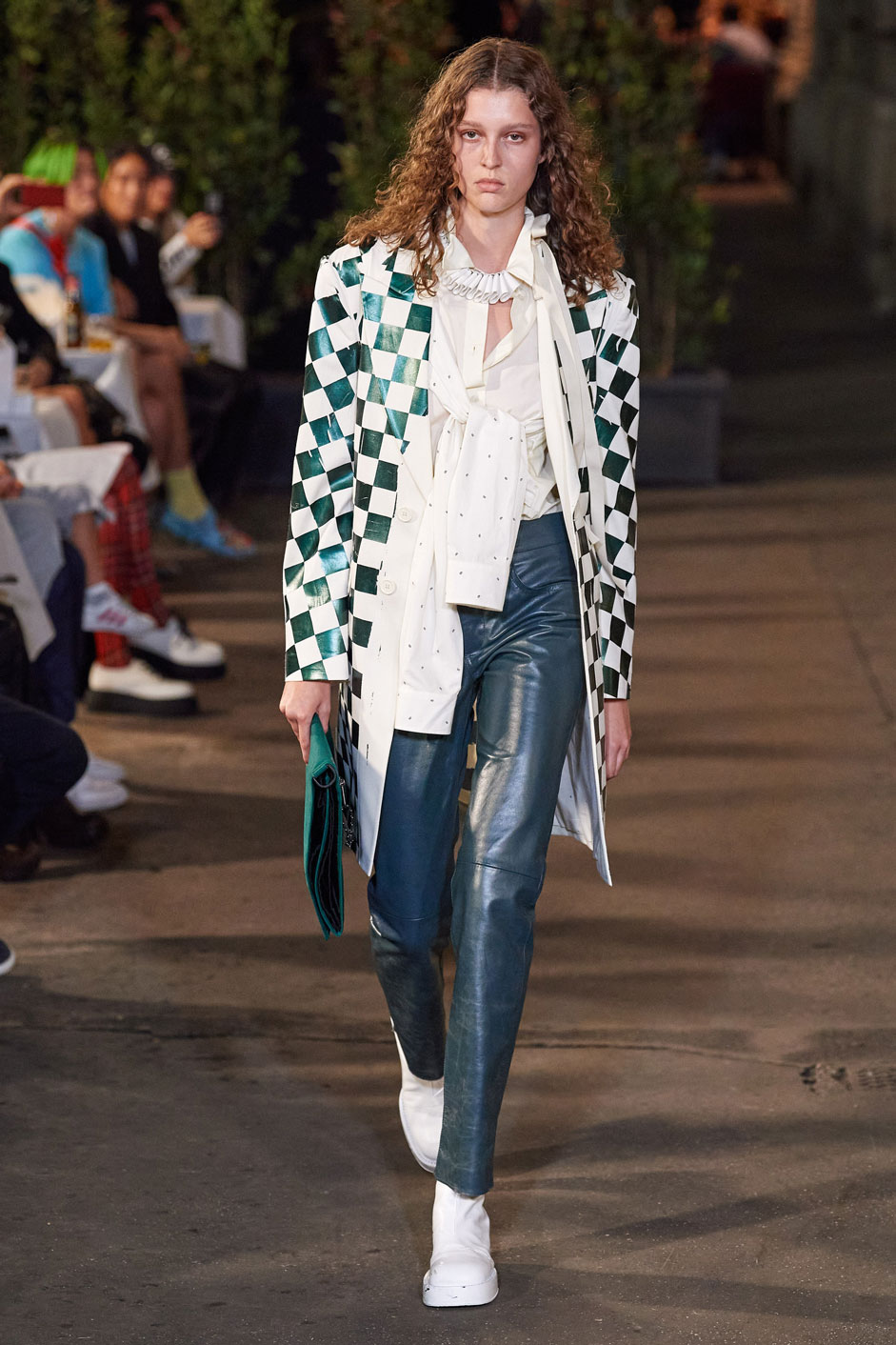 MM6 Maison Margiela invited audiences to the always welcoming Milanese haunt La Belle Aurore for a sharp yet sublime exploration of community and shared experience.  Spearheaded by the line’s anonymous design collective, the experience of touch and the presence of invisible company was conveyed through extroverted eclectic expression.  Ornamental gloves hung from dresses and protruded from trouser waistbands and bag handles.  Spare sleeves were tied across leather jackets and hung across blazers.  MM6 paid homage to the rebellious spirit of feminist surrealism, citing Claude Cahun, Leonora Carrington and Dorothea Tanning as influences for this season.  Alongside a sophomore Eastpak collaboration and a signature T-shirt collection, MM6 offered us the opportunity “to turn to your neighbour and clink glasses; to eat, drink and be merry”. 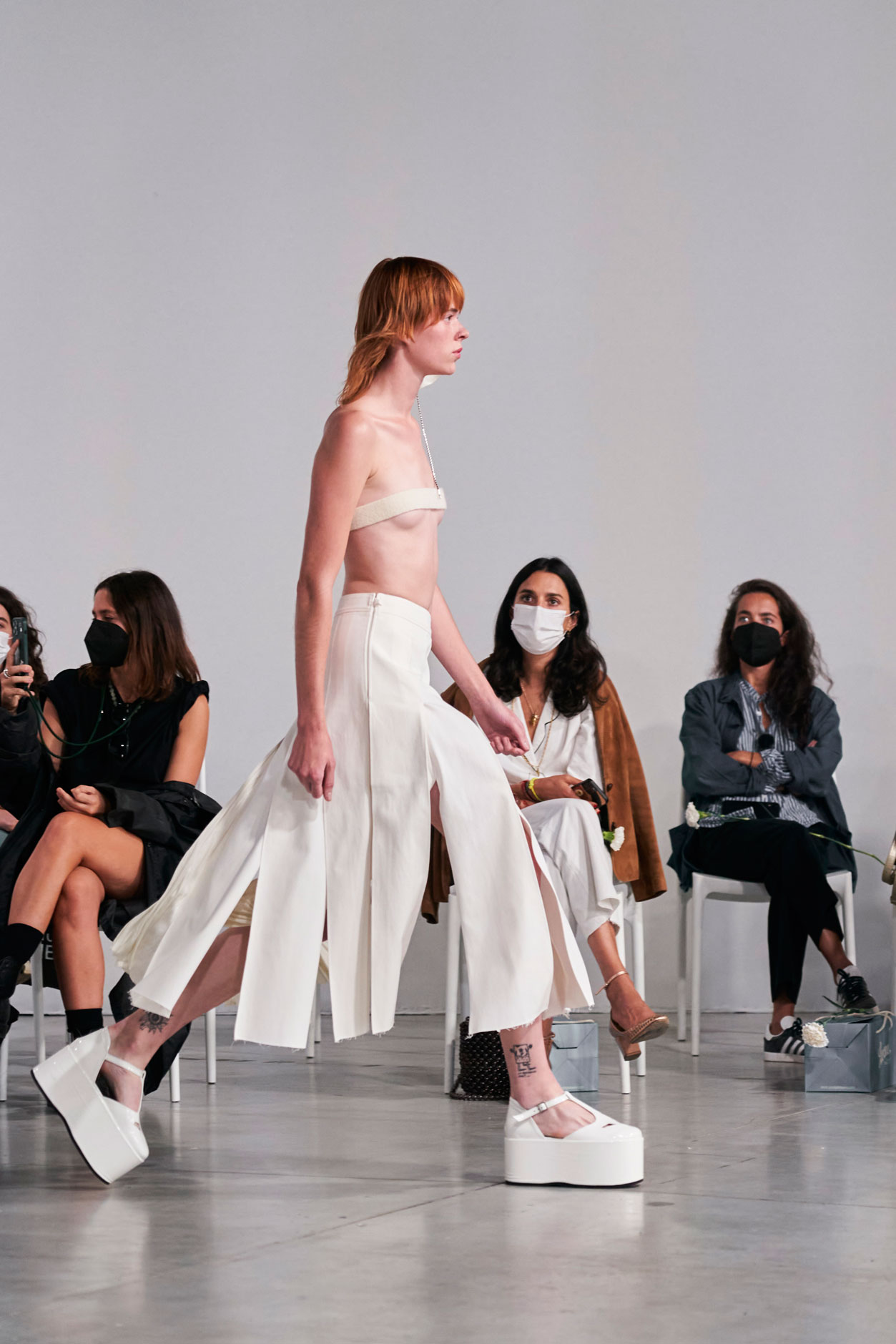 Sicilian fashion agitator, Alfredo Cortese launched A.C.9 in 2019 with an aim to fuse nordic lines with an Italian impulse.  For S/S2022, Cortese debuted the brand’s first fashion show with masterful ease.  ‘Alice in Modernland’ served as a fairytale for aspirational contemporary womanhood; one defined by stubborn bravery and gothic instinct.  In three acts, the collection developed through purity, awareness and finally maturity.  Shades of white were experienced in increasingly disheveled yet refined shapes, as vintage recycled Japanese satin combined with lace for lingerie and slips.  Pleated tennis skirts were extended and fragmented to the ankle, first in white, then later in black.  Childlike innocence remained central to Alice’s rebellion, with large shapes producing a visually smaller frame.  A lesson in stylistic storytelling, A.C.9 flourished in a runway debut that pushed the boundary between reality and dreams. 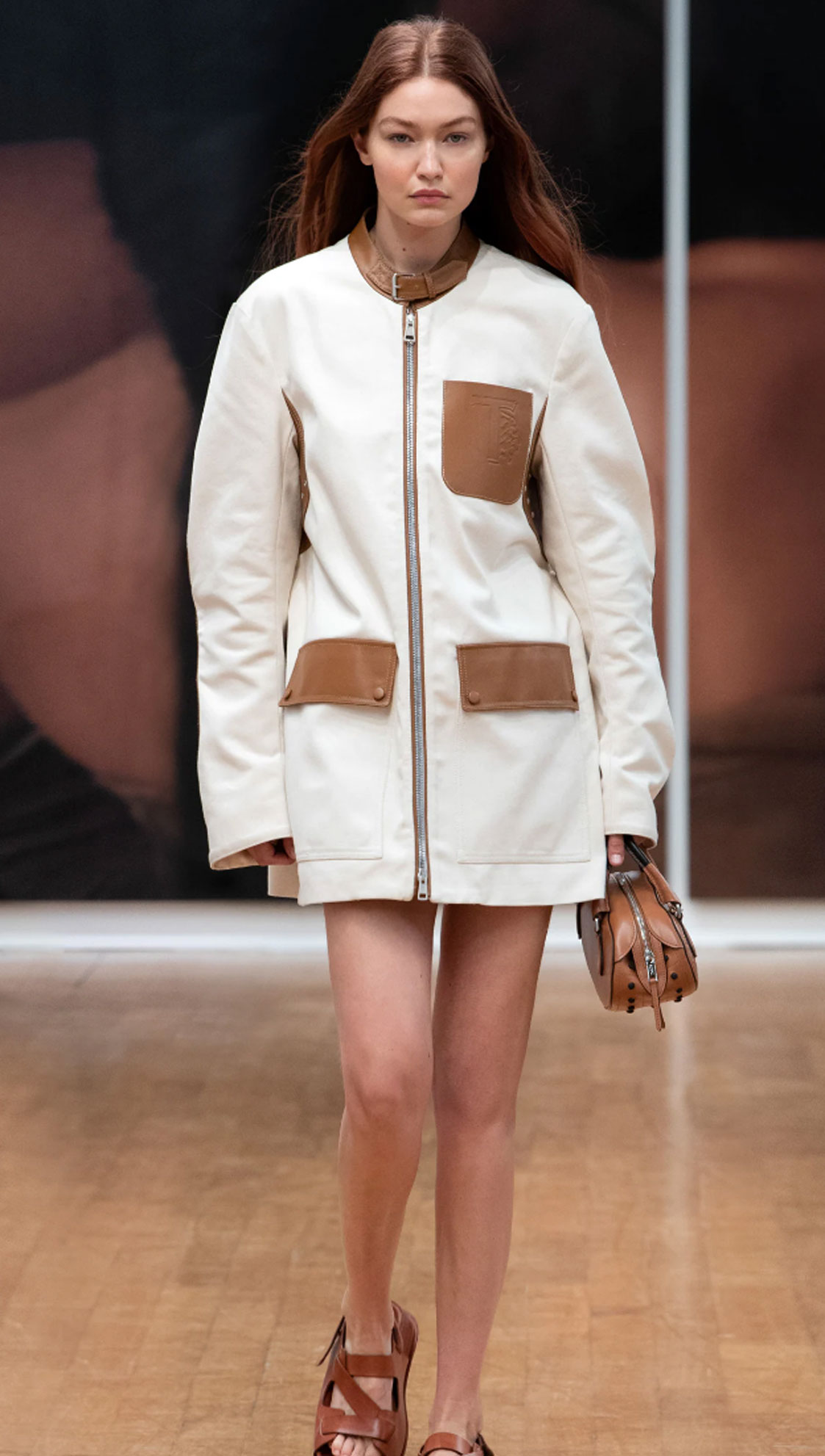 Enlisting renowned Barcelona-based photographer and artist Carlota Guerrero, Walter Chiapponi’s ‘An Italian Light Life’ included a video performance piece exploring feminine form, community and the fashion atelier.  With a palette consisting of muted stone and diverse nude tones, Guerrero’s seven figures resembled an ancient feminine utopia, a testament to the historic roots and craft of fashion.  In Milan’s Padiglione D’Arte Contemporanea, Gigi Hadid opened the show in a luxurious subversion of the athleisure zip-up.  Tod’s sartorial prism gave length to the elegant cream jersey, as masculine leather features culminated in an embedded leather belt closure at the coat’s relaxed round neck.  The look was minimalist and timeless, speaking to the brand’s vision for a lasting legacy. The signature compact handbag featured in classic tones and sandals with macro rubber soles offered a bold new silhouette. Uniformity emphasised the precision of Tod’s modernist cut and design, exuding an effortless touch from sketch to performance.  “A wardrobe that has a desire for relaxation,” writes Tod’s, “but at the same time exalts good taste and quality”. 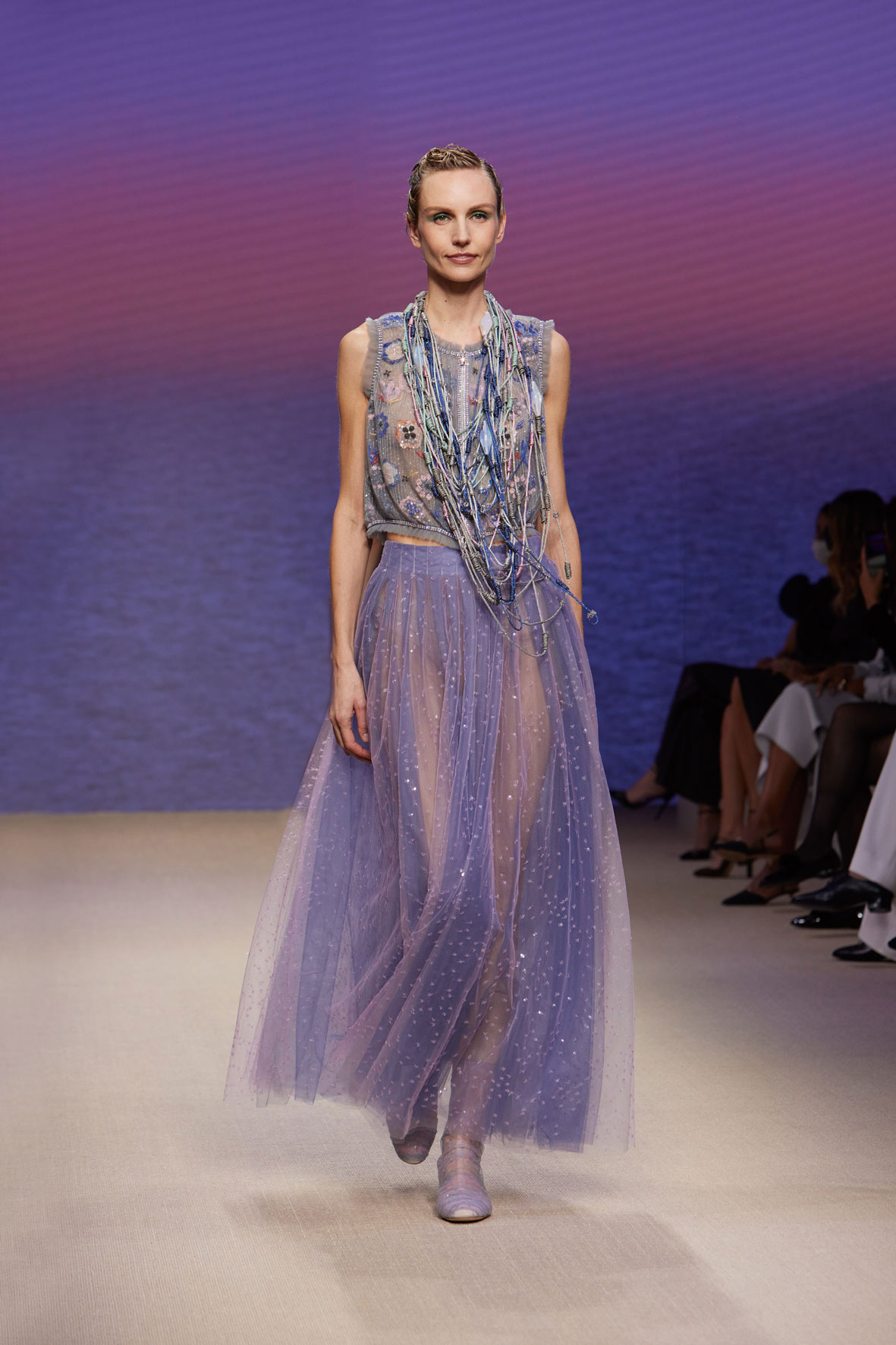 Intimacy was key to this defiant post-pandemic return from Giorgio Armani.  After twenty years, the designer came home to the historic Via Borgonuovo 21 – the basement theatre that once housed the fashion brand for 16 years.  The collection was a stated “comeback” for the designer, as signature Armani tropes melded with urbanite bohemianism to curate a profound sense of precision and freedom.  Nomadic and vintage accents were revisited with knotted scarves and closures complimenting flowing balloon trousers and parachute pants.  Casual wear flowed while evening wear provided the arresting highs of the collection.  Incandescent and ethereal gowns softly skimmed the body.  Pale and airy shades of grey and silvers were layered to provide sensuous and elegant diaphanous filters.  Earlier explosions of colour featured once more as controlled accents of blue and white were interspersed around glittering gold rings, evoking the structure of a 50’s hoop skirt.  Thirty-six years since his first show, Giorgio Armani expertly explored movement and constancy with a tactile collection that begged to be worn and caressed. 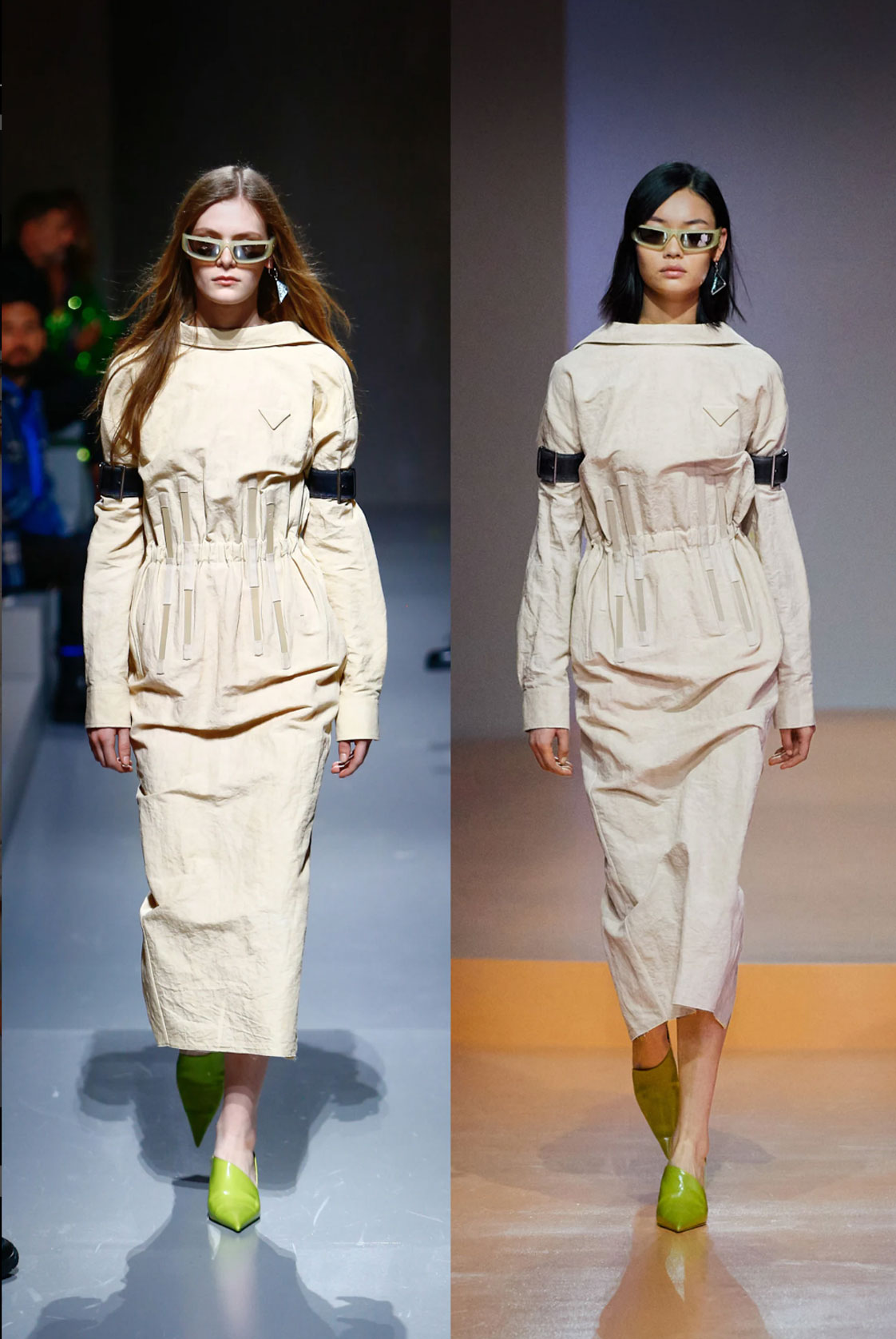 In a move that expanded the Western-centric mode of fashion week, Prada presented their S/S2022 Womenswear collection, ‘Seduction, Stripped Down,’ simultaneously in both the Deposito of the Fondazione Prada, Milan and Bund 1, Shanghai.  Video screens engaged each show in a physical and virtual dialogue with the other.  Across this globalist, techno-futurist stage, Prada co-creative directors Miuccia Prada and Raf Simons explored the architecture of the body by means of minimalism, emphasis and exposure.  Traditionally enclosing textures are revitalised by antecedents re-contextualised – the outline of a brasserie was constructed within the thick ribbing of a long-sleeve jumper, for example.  The collection felt equally elegant and wonderfully post-modern as the process of stripping down apparel led to delicious utilitarian silhouettes culminating in the collection’s understated highlight: a gender-defying dress featuring long tailored sleeves, corset boning to emphasise a pinched-effect elasticated waist, and a statement cowl neckline reimagined in the sharp lines of a reversed notch lapel. For Prada S/S2022, the “fantasy of evening wear was counterbalanced by the reality of the everyday”. 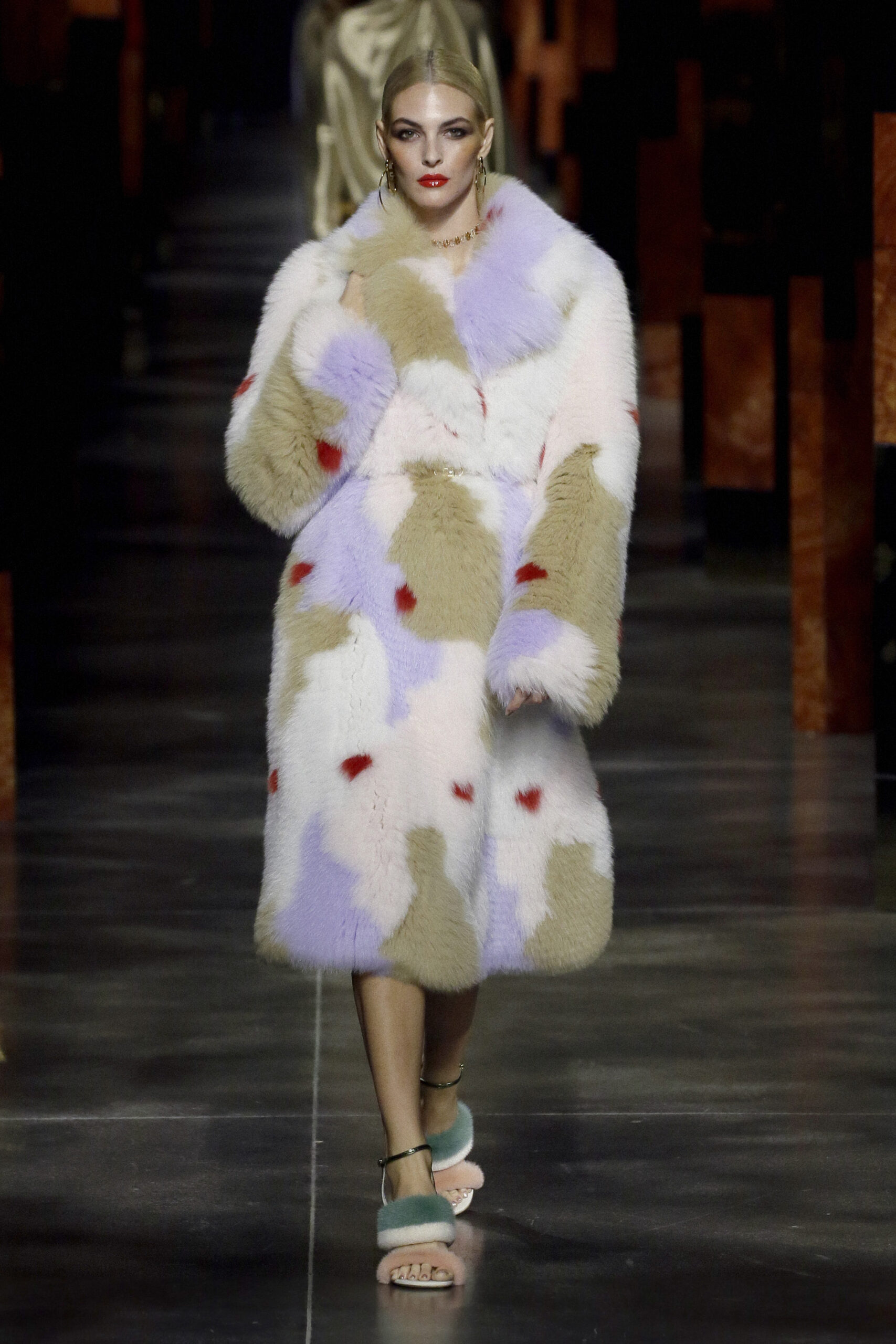 Kim Jones’ S/S2022 collection presented a succinctly contemporary disco playground reworked through the eyes of fashion illustrator and LGBTQIA+ icon Antonio Lopez.  “He was forward thinking; inclusive,” writes Jones of his late inspiration.  “I wanted to introduce him to a new generation”.  The liberating influence of Lopez and his partner Juan Eugene Ramos can be felt equally in both Lagerfeld’s freer artistic shift of the 1970s and now. The collection merged Jones’ distinct tailoring signatures with a frisson of Lopez’s archival material.  Setting his sights playfully on Fendi’s roots, Jones translated Lopez’s figurative drawings into pastel intarsia leathers for a set of arresting thigh-high boots, and jackets embossed with the ‘double F’ stamp.  A line drawn feminine silhouette was explored for a maximalist and expansive set of furs and handbags.  A marriage of creative imperatives, Jones presented a collection that reminded the world, “the Lopez woman, and the Fendi woman, is empowered; she’s someone of her own making.” 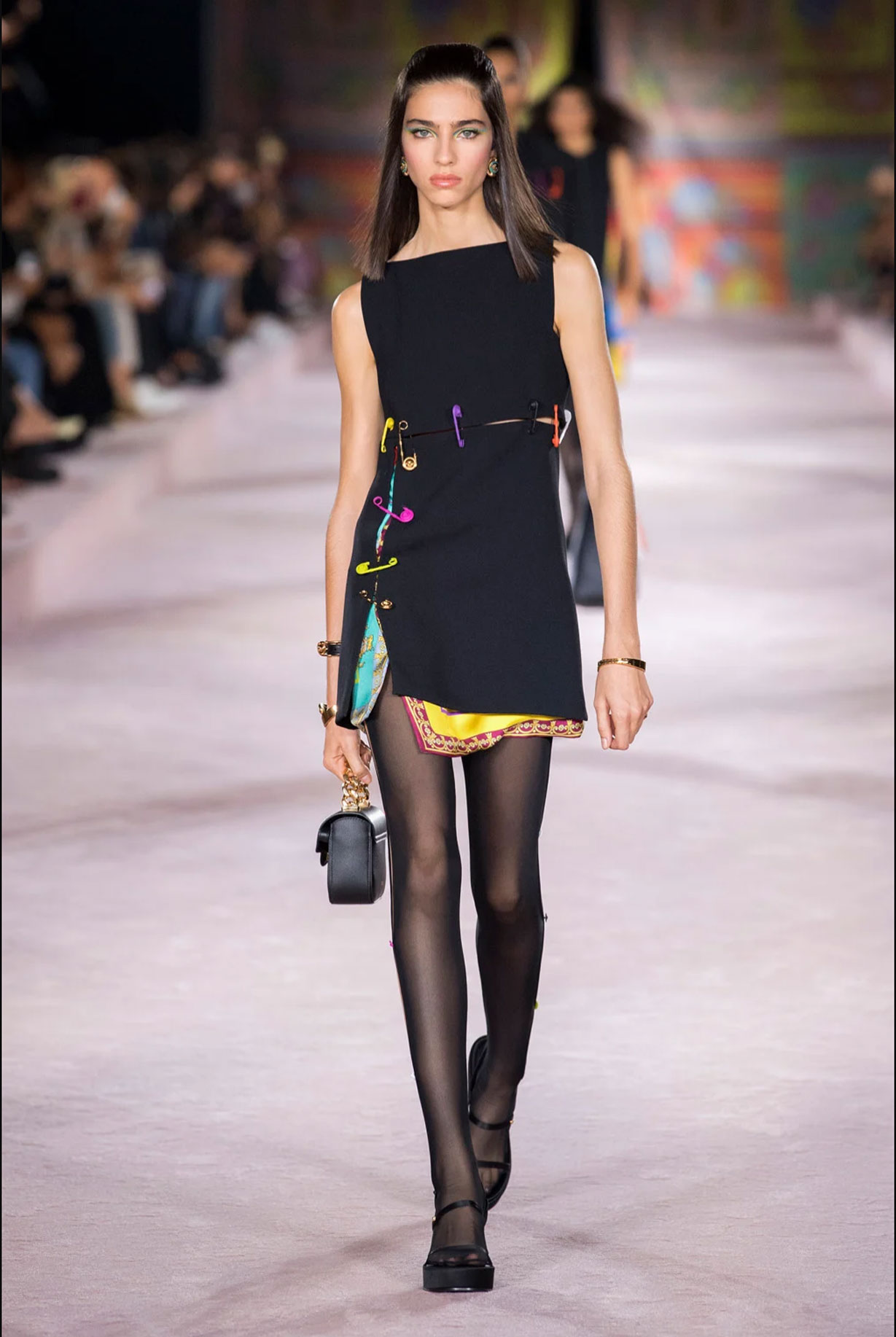 With a vast 79 looks, Versace exemplified the versatility of the brand’s iconic silk foulard.  A founding element of the house, the fluid and dreamlike scarf was reformed in skin-tight and provocative silhouettes.  This season, Versace oscillated from styled latex in shocking colour palettes, to black off cuts adorned with maximalist safety pins.  DIY sensibilities and Y2K fashions recalled the revolutionary hope of the punk scene and the millennium for the present day.  Slashed evening gowns provided majestic displays, but it was in purposefully unpolished and unfinished moments that the collection thrived.  The little black dress was ripped apart and rapidly thrown back together, transforming it into a sexy shrunken-fit, seemingly barely held together piece of art.  Flashes of midriff appear between one set of safety pin fastenings, while the second set made space for the electric sea-green Versace scarf to emerge in the absence of fabric.  Summer 2022 will be a triumphant homage to the origins of this wardrobe staple and its metamorphosis throughout Versace. 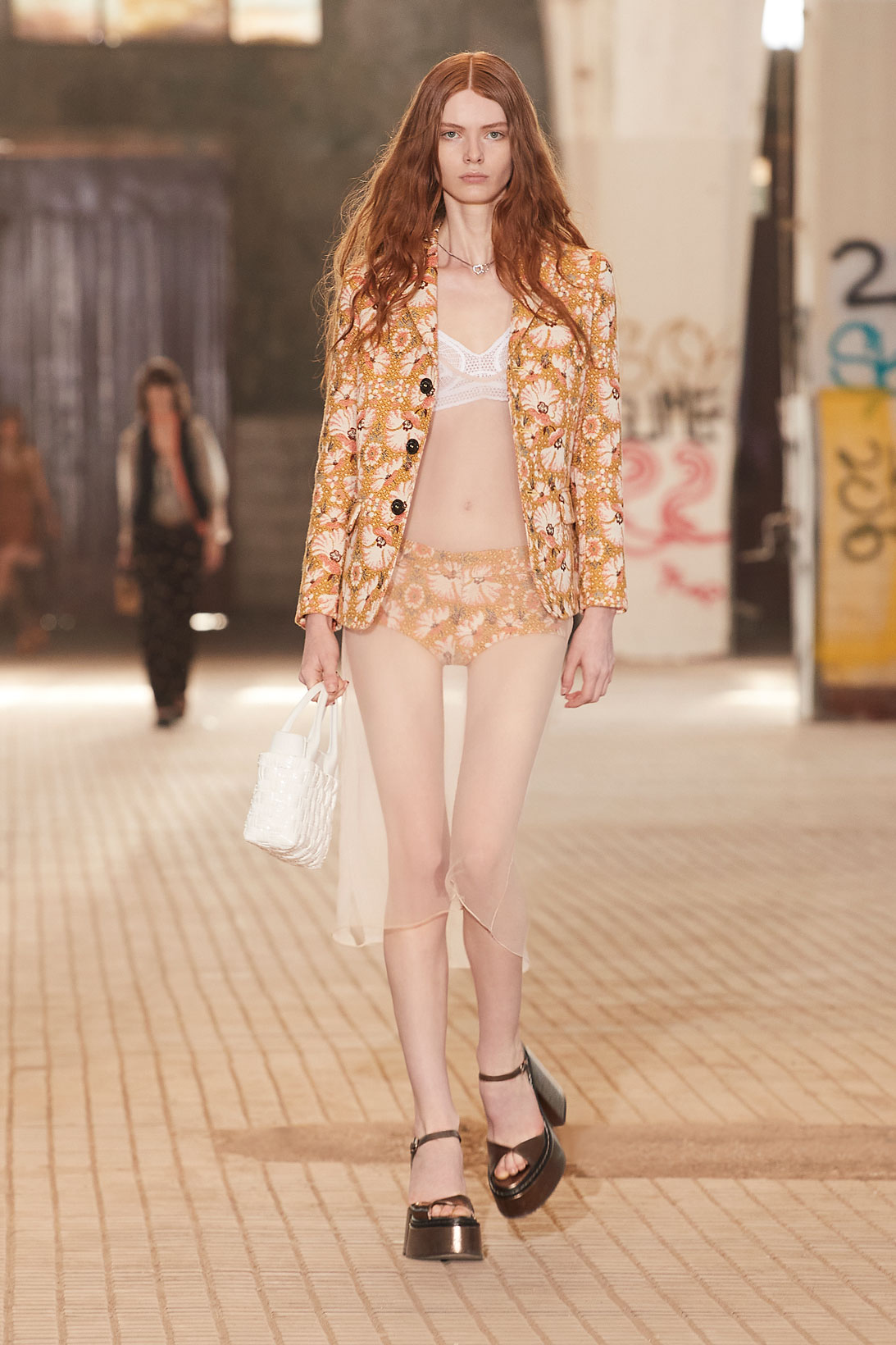 With a joint women’s and menswear activation, DSQUARED2 presented the #D2Fairytale – a grungy ethereal dichotomy that revels in contemporary new romanticism.  Fairytale is a primary inspiration for Milan this season and like the Modernland of A.C.9 and underwater dreams of GCDS, the nostalgic theme was fully explored and realised in a collection titled ‘Fairytale Grunge’.  Destruction and distress is paired with ghostlike whisps and 70s floral prints to reflect what the brand calls “a past, future, and a presence”.  Dreamy idealism looked toward an uncertain future with confidence, as delicate fabrics flowed from crochet bras with layers of robust textures and overpowering patterns.  An ethereal yet lived-in vision, DSQUARED2’s grunge fairytale was a technical masterpiece featuring complex cascades of filaments, layering and patchwork. 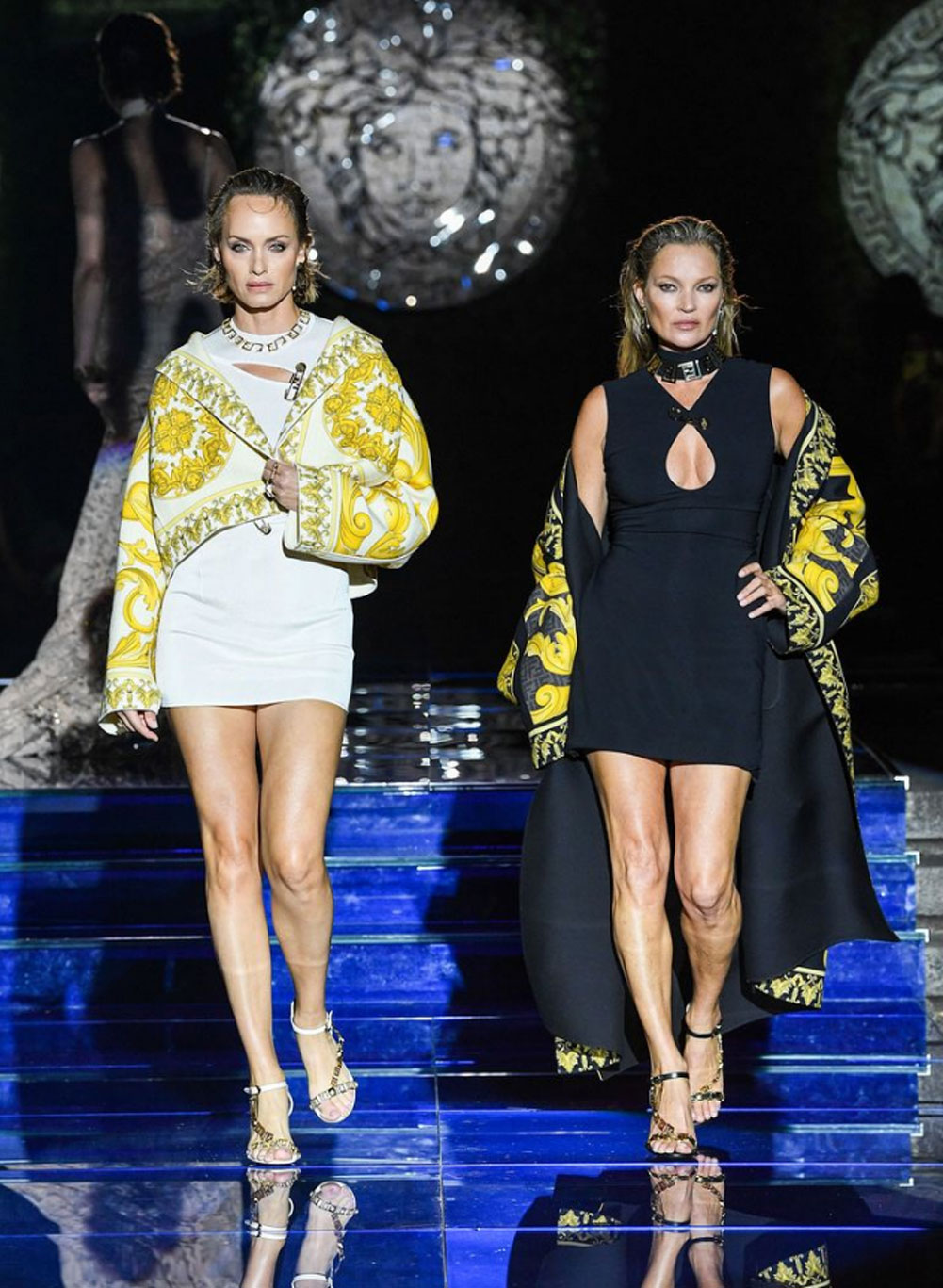 “It’s a first in the history of fashion”, stated Donatella Versace, “two designers having a true creative dialogue that stems from respect and friendship”.  It is truly a rare occurrence to cross the ‘party lines’ of luxury, yet, following the hacking project between Gucci and Balenciaga, Fendi and Versace have pushed the boundaries even farther.  For the first time, Donatella Versace and Silvia Venturini Fendi stepped out of their respective family houses to be moved by the other’s creative vision.  Versace and Jones walking arm-in-arm crashed Twitter and Instagram feeds as the catwalk’s backdrop swivelled to show both logos as two sides of the same coin.  Featuring an esteemed list of icons like Naomi Campbell, Kristen McMenamy and Kate Moss, Fendace provided highs ranging from Versace’s mid-to-late nineties cuts, to a contaminated punk approach to the fur and leather house of Fendi.  A melting of brand motifs and monograms; the collection tantalised audiences with codes hidden in reversible forms, safety pin punctured Fendi signs and chainmail reformed in leather and lace. ‘Fendace’ was not just a collaboration but a sign of admiration between two indomitable fashion houses, a full scale “to-hell-with-it” disruption of expectations and order.