Native New Yorker Jeremy Scott brought Moschino to his home town for the first time earlier this week and, even if you didn’t see the show, it must be obvious by now that the memories of their city for most New Yorkers are always intimately wrapped up in the city’s infamous subway system.  It was the thing the Jennifer Lopez literally built her career on before she became JLo.  For Scott it was the method by which he pursued his vision while studying at Pratt University in Brooklyn.  The Metro Transit Authority might as well have been surrogate nannies for all of them in their formative years.  The only surprise then is that it took Scott this long to pay homage to his city and the arteries that make it breathe.

“New York is the ‘city that never sleeps.’  With that in mind, I wanted to offer a little bit of everything. A round-the-clock set of ensembles for city girls and guys who aren’t afraid to go from the ballroom to the back room, then watch the sun come up over the East River. There’s nowhere else in the world where you get that kind of energy and magic!” – Jeremy Scott 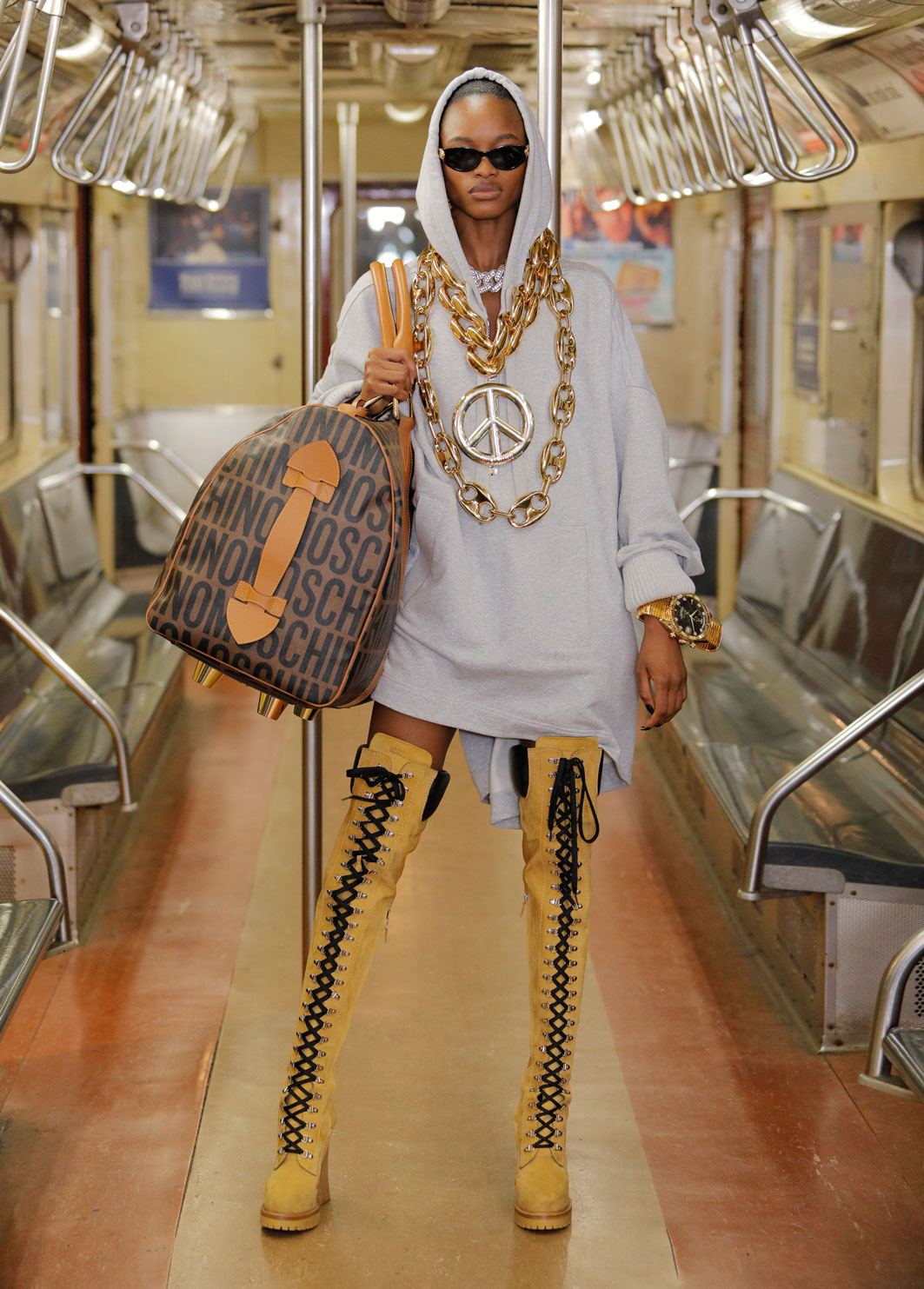 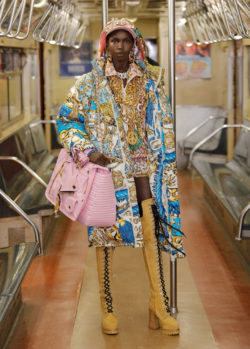 A little bit of everything is what we got, in a show that was held, appropriately enough, at the New York Transit Museum just a stone’s throw away from Scott’s alma mater.  As the models chopped it up through the subway car-cum-catwalk you were transported back to an era of Hip-Hop B-Boys and B-Girls wearing Run DMC phat gold rope chains and jostling shoulder to shoulder with the sleek yet proper silhouettes of the Mad Men (and Women) of the advertising world and the Wolves of Wall Street during an average rush hour morning.

The Eric B and Rakim ‘Timberlands look’ was taken to the extreme by extending them to ultra thigh-high proportions and teaming them with slouchy oversized hoodies and shoulder bags.

Melanie Griffiths’ ‘Working Girl’ wore simple tweed two-pieces that were spliced, mad scientist style, with heavily contrasting navy denim to let you know there was more to know than just what meets the eye.  Of course, this was New York, and what’s a city that never sleeps without its international tourists?  Coming to America’s ‘Prince Hakeem’ wore chunky knitwear in bright native colours under the biggest, most gorgeous hooded shearling coat you are ever likely to see.  The lithe supermodel on her way to the day’s go-sees mixed it up with oversized wide pants with a waist so high it doubled as a bustier when cinched at the waist with a wide belt with a giant buckle.  Even the Hell’s Angel biker got a look in, decked head-to-toe in black leather adorned with zips and graphic prints that just looked like zips. 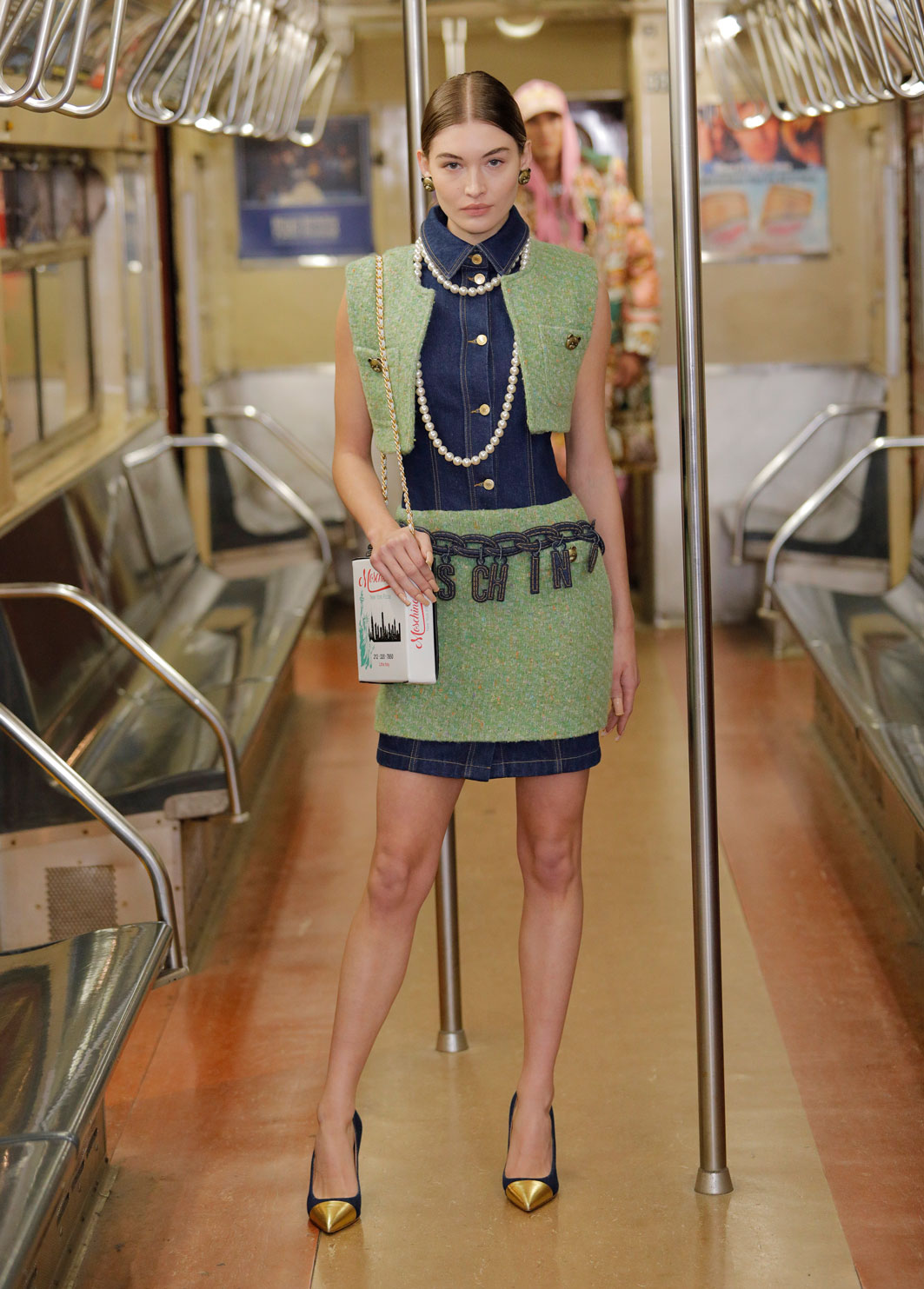 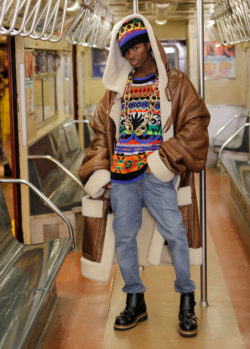 Throughout the show you were treated to the humour and irreverence that Scott has become notorious for – whether it was a giant safety pin here, a truly gargantuan peaked cap there or dresses, jackets and trousers with graphics seemingly lifted straight off the cover of LL Cool J’s 1985 debut album Radio straight up the middle, there was no mistaking it.

What we were watching was a live version of the memories of Jeremy Scott’s New York growing up.  And Moschino are going to be the ones benefitting from those memories in 2020. 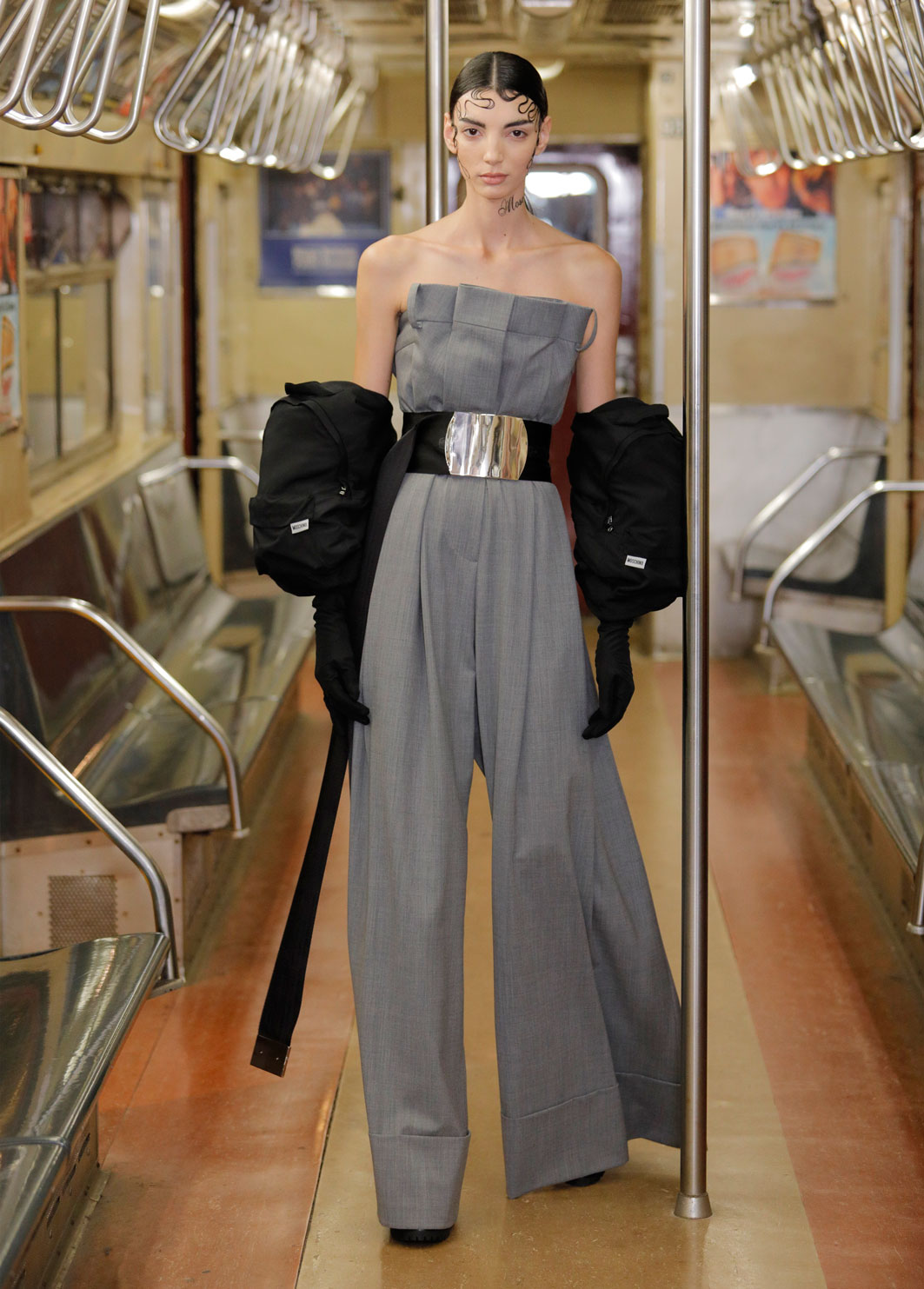