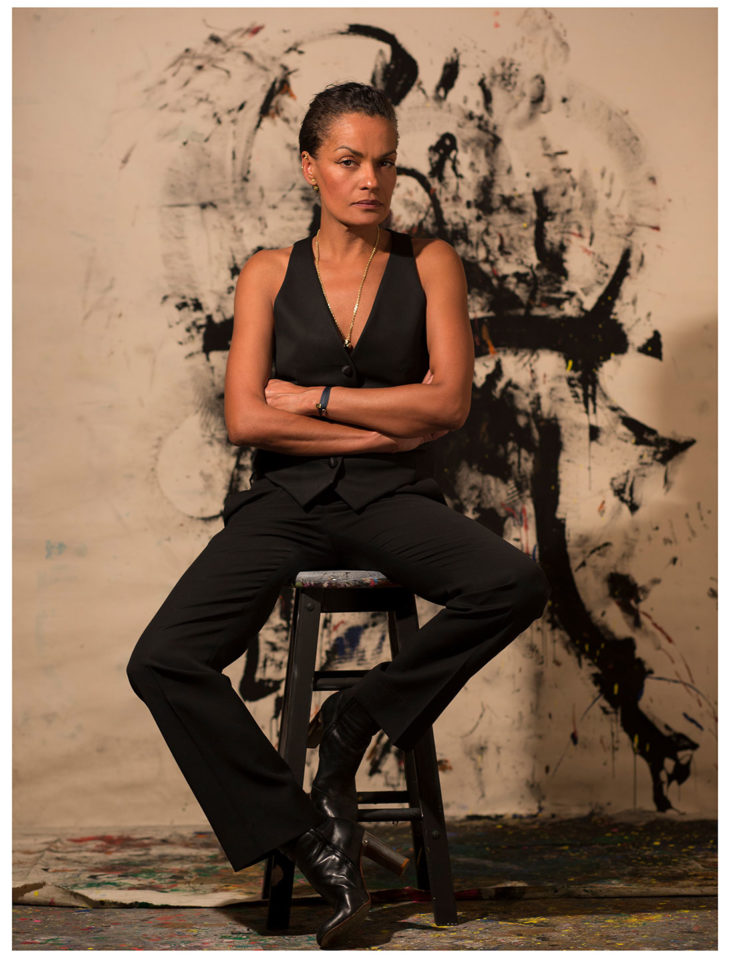 Painter of skin, artist of makeup, there’s so much more to Vicky Steckel’s astonishing images than meets the eye. Words by Scarlett Russell.

Look closely at these paintings. Striking, stunning, captivating but paintings they are not. These stunning pictures are, in fact, photographs of a real-life model, painstakingly detailed to match the canvas backdrop, challenging all manner of perceptions. The images are the work of Vicky Steckel, a makeup artist from New York who’s passion for painting both body and canvas have led to her latest work venture, BOSCAR – Background Objective Scope Art Revolution.

Five years in the making, the project merges all these talents. “Being a makeup artist is more enjoyable than ever,” she says of her remarkable career. “I get to collaborate with amazing stylists, photographers, and directors but BOSCAR is my thing. There are no rules, regulations or constraints. Nothing matters; I go for that passion and chaos of love. I’m putting it out there. Whatever comes back is great.”

“My day job is being a makeup artist on editorial or advertorial shoots which tend to be during the day and during the week. At night and on the weekends I paint.”

Born in the Dominican Republic in 1966, Steckel, her younger brother and sister were raised by their single mother. “I came from a poor family,” Steckel says. “My grandmother and my aunt had moved to America to find a better life and my mum followed them, figuring it would mean a better education for us and better opportunities.” Steckel was 14 when Brooklyn became her new home and transitioning between teenage and young adolescent years in 1980s New York sparked a life-long love affair with art.

“Growing up in the Dominican Republic I had all these magazines but they were in English and I didn’t speak English back then, so I only understood the images,” she explains. “They resonated with me. The art and colours, I loved everything about them. Then, growing up in New York, oh wow….” She trails off, a nostalgic beam spreading across her face. “Art was right in front of you wherever you went. My mom thought subway trains covered in graffiti were dangerous but I thought they were gorgeous. Street art was my inspiration. I started drawing. Then I discovered Basquiat, Jackson Pollock, John Mitchell and Rembrandt. I actually feel more influenced at the moment by classic Dutch painters.”

“One day, someone I knew said that a makeup artist was coming to do a shoot and needed an assistant… I didn’t really know anything about that world but I thought it sounded cool. And that shoot changed my life.”

In her 20s, Steckel lived in Manhattan lofts with other artists and bartended with aspiring actors, singers, musicians, and designers. She then spent time living in California, during a short-lived quest to become an actress, “but I soon discovered that I was more interested in working behind the camera instead of in front of it.”

It was during a stint living in Miami when she fell in love with makeup. “My job at the time was selling makeup but I hated it,” recalls Steckel. “I just wanted to make people more beautiful, I didn’t care if they bought the products. One day, someone I knew said that a makeup artist was coming to do a shoot and needed an assistant and asked if I was interested. I didn’t really know anything about that world but I thought it sounded cool. And that shoot changed my life.”

The shoot, it transpired, was an American Vogue cover with Carolyn Murphy, Christy Hume and Anja Rubella shot by Steven Meisel. “There I was, on an island on the Florida Keys at sunset with Steven, Pat and all these amazing people and it brought tears to my eyes because it was such an incredible experience,” says Steckel. “It was like a scene of a movie. For the first time I found something I really loved. I was so drawn into it.” McGrath became a mentor and Steckel’s work is still regularly seen in US and UK Marie Claire, Numéro, Vanity Fair Italy and Paper Magazine. She’s shot advertorials for Kiko, K-Swiss and Sea Folly with Gigi Hadid.

BOSCAR started by accident in the basement of the family home Steckel lives in Queens. “I rent the third floor to live in and use the basement for art,” she says. “My brother and I were in the basement five years ago and I had paint left over from a previous job where I was body-painting models. I painted him and took a picture of him in front of my oil canvas. Then I uploaded it to iPhoto and realised that, unconsciously, he was blending in with the painting behind him. It looked so cool. I showed my friends and they all wanted to be painted too, especially the girls. I’d have them naked, covered in paint, in very bold, sexual positions. It was just a private thing at first; I didn’t know if people would understand it. I was afraid that everyone would think the images were too strong, crazy and weird.”

“The images you see here have no Photoshop. They’re completely raw. Before, the girls were completely naked, open legs, sexual, now they’re wearing an item of clothing and are more feminine, delicate and romantic.”

Encouraged by her then-partner Wade Stegerhoek, also an artist, Steckel uploaded the pictures to Instagram but “kept getting kicked off” the site because the pictures were seen as explicit. Two years ago, with Stegerhoek on board, ideas flowed, collaboration grew and BOSCAR was born. They showed and sold pieces in Art Basel and garnered press attention – a six-page feature in US Marie Claire, splashes in S Magazine and various European art magazines and blogs.

Now Stegerhoek has taken a step back, Steckel is changing her approach to the project. “This is a new beginning,” she says. “I’ve made some changes as far as the images and printing is concerned. The paper is matte as opposed to glossy. I stripped it all back. The images you see here have no Photoshop. They’re completely raw. Before, the girls were completely naked, open legs, sexual, now they’re wearing an item of clothing and are more feminine, delicate and romantic. I’m softening, in all senses, from the printing to the colour to the models.”

Some models are professional, some artists and some even friends who volunteer to be splattered with paint. Steckel starts the shoot with coffee and fruit before beginning to paint them – the canvas is usually completed beforehand. “I can tell straight away how much endurance they have, whether they’ll be able to pose for two or twelve hours,” she says. Some subjects are so committed that they sleep over in Steckel’s spare room and continue the next morning, posing for up to 18 hours in total. “The whole process is pretty raw. There’s no bathroom or heating in the basement but often they get really into it and throw their own ideas in. We have some jazz on in the background or something low tempo like Café del Mar.” 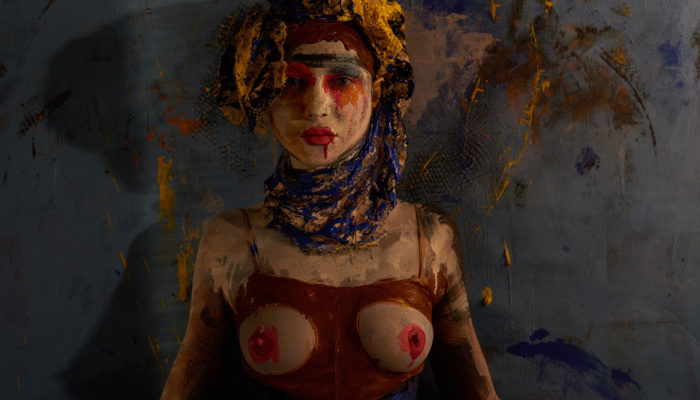 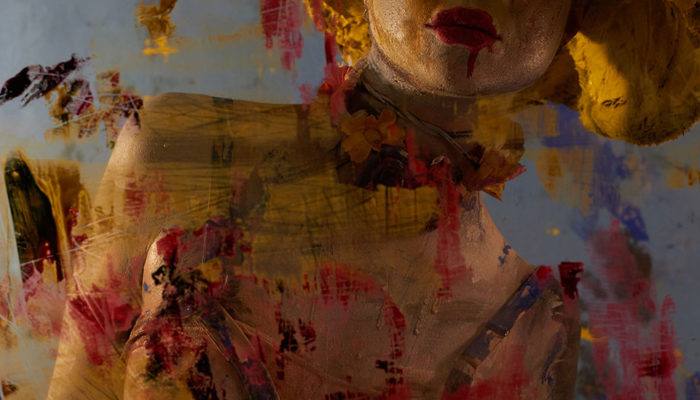 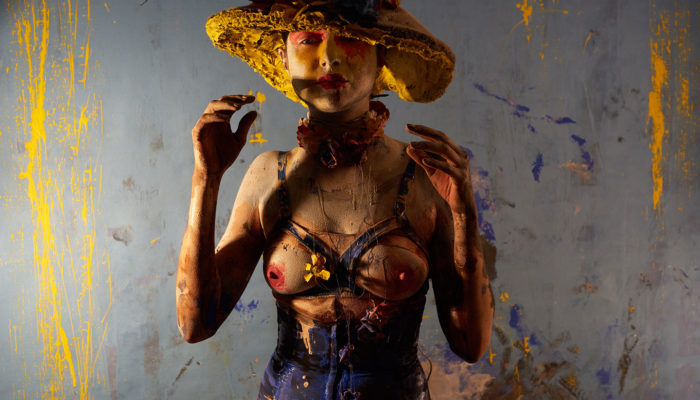 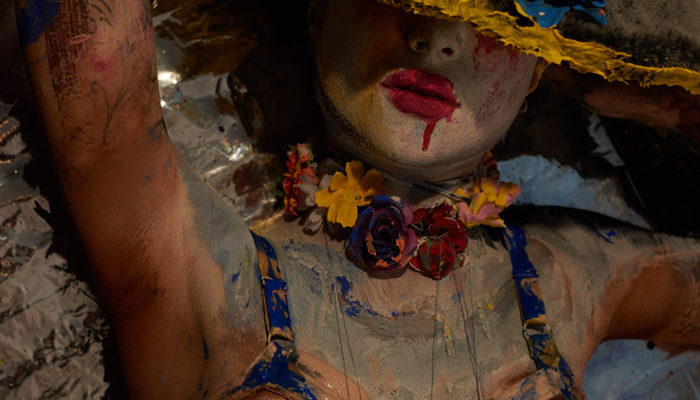 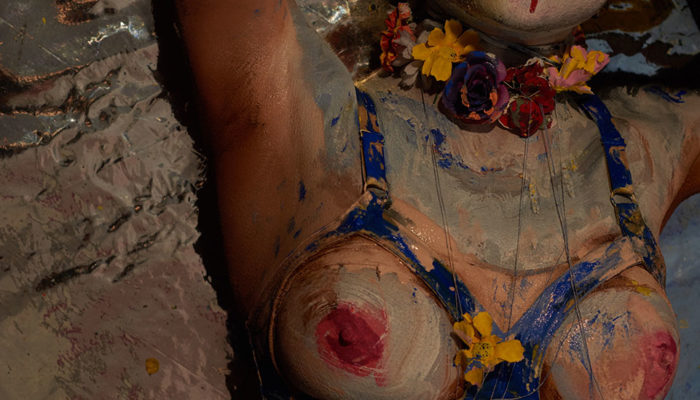 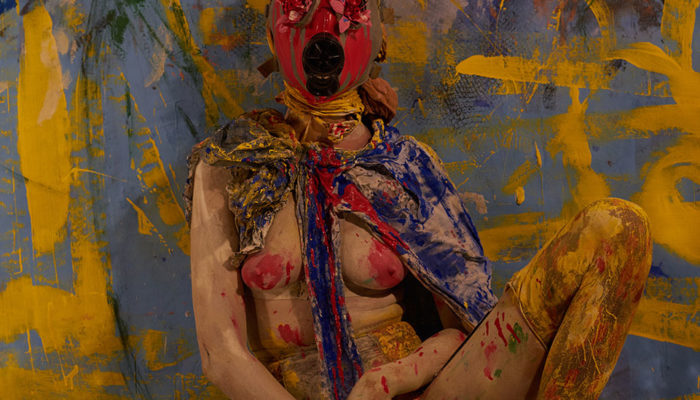 Next up for BOSCAR are more art shows, a book and – Steckel hopes – a future exhibition. For now, she’s blissfully content with travelling the world for makeup shoots by day and quietly revolutionising the art world from her basement, at night. “Both makeup and art are both equal passions of mine,” she says. “It’s like mixing drinks: One compliments another.”