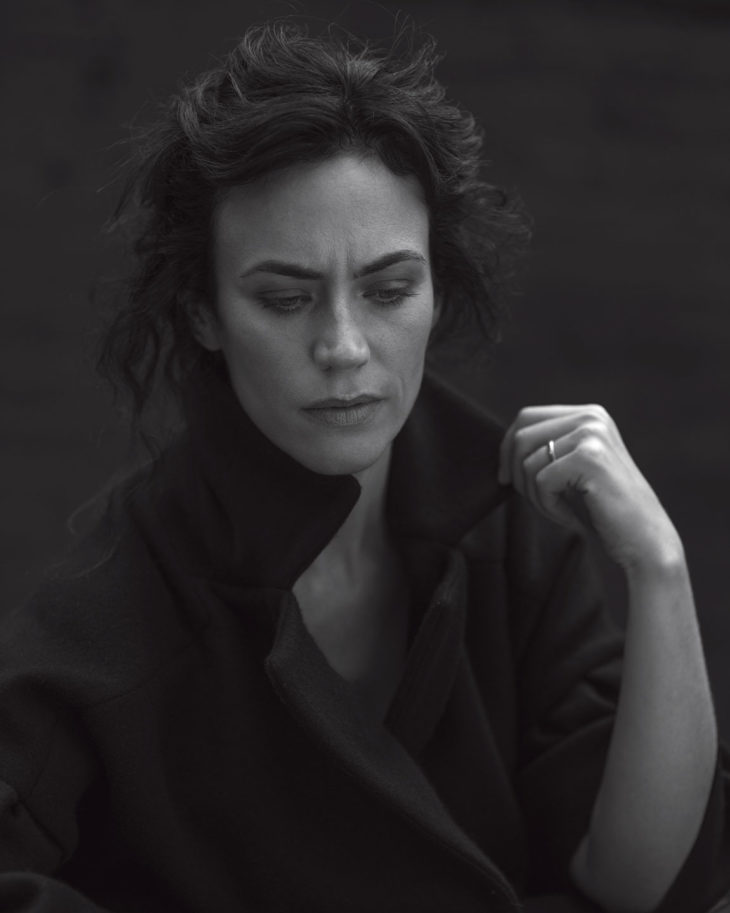 Mad Men, Sons of Anarchy and Billions – actress Maggie Siff usually lives in very masculine worlds, both on and off screen, but that doesn’t mean she’s just going to accept the status quo.

It’s a hell of a way to make a first impression. For Maggie Siff, who plays the psychiatrist-turned-dominatrix, it presented both a challenge and an opportunity. “The sex stuff I was nervous about,” she says. “I’m not really an exhibitionist, yet I thought it was a really interesting component of their marriage. It felt smart. It made me want to know about that marriage, who those people were to each other and how they arrived there.”

So it also makes her – in a show full of macho characters – quite literally the boss? “And in a very literal sense, it makes her the boss, yes,” she laughs. “She’s comfortable in that role.”

Main image: coat by Whit. Above: shirt by Palmer Harding; trousers by sea; shoes by Pollini.

Siff and I are having breakfast in a hotel in Lower Manhattan, and over fruit and coffee she’s lamenting how rare it is to be offered such a powerful and complex female role. As an actress she has become accustomed to being presented with barely sketched stereotypes. “There’s the bitchy wife, the bitchy ex-wife, the sardonic best friend… There’s a lot of those tropes,” she says. “There’s just a disproportionate number of male writers and directors and producers, so the stories that are getting told are slanted that way. You get so used to that as a woman.”

It’s a particularly challenging situation for young actresses who are so keen to find work when they’re starting out that they find themselves playing roles they may inwardly cringe at. Siff, who grew up in the Bronx before studying English at Bryn Mawr, a women’s liberal arts college in Pennsylvania, and theatre at NYU’s Tisch School of the Arts, remembers this time of her life well. “When you start out as a scrappy theatre artist just trying to pay back your student loans, you go through several years where you’re panning for gold,” she says. “I wasn’t picky at all. Your standard for what is acceptable goes down because you have to do things just to survive.”

After years working in regional theatre, her television break came in her early thirties when she was cast to play department-store heiress Rachel Menken in Mad Men. It was a role close to her heart. “Somehow I just knew that part was mine, no matter how many times I went back to audition for it,” she says “I just had this feeling like I knew who that person was. She reminded me of my grandmother, who grew up on the Lower East Side as a Jewish woman. I just thought, ‘Nobody else knows this character as much as I do.’ That’s a very unusual feeling, but it does happen rarely.”

Just as Mad Men was taking off, Siff won her next major part in biker drama Sons of Anarchy. It turned into a six-year job, filming for six months a year in California. She spent her summers there and her winters back in New York with her first love: theatre.

“I never think about quitting acting, but sometimes I do think, ‘When can I just go back to theatre?’” she says, pointing out that on the stage there’s less of a struggle to find great female roles. “It’s nice to go back to jobs where it’s purely an artistic exercise and not a commercial enterprise. I feel like that’s really where you get into the trouble spots. I’d also like to do more teaching, or things where the love that I have for the craft doesn’t have to be constantly slimed by the sexism that is really hard to avoid.”

Poloneck by Jaeha; Trousers by Sea; Boots by Jimmy Choo.

Finding good roles is a perennial problem for actresses, and one that exacerbates off-screen problems of gender inequality, too. When there are fewer great female roles to go around – and fewer female roles in general – it places actresses in a difficult bargaining position, which in turn leads to the pay gap that’s recently been such a heated topic of debate in Hollywood. So, I ask, what’s the solution?

“I don’t know, I’m trying to figure it out!” she laughs. “I go round and round, because as a working actor you have to figure out how much power you actually have and how to use it. I’m not Scarlett Johansson, I’m not a box-office draw in mainstream movies, so I feel like all I can do is be very selective about the kind of jobs that I choose to take. It’s about the kind of stories that I’m choosing to tell.” 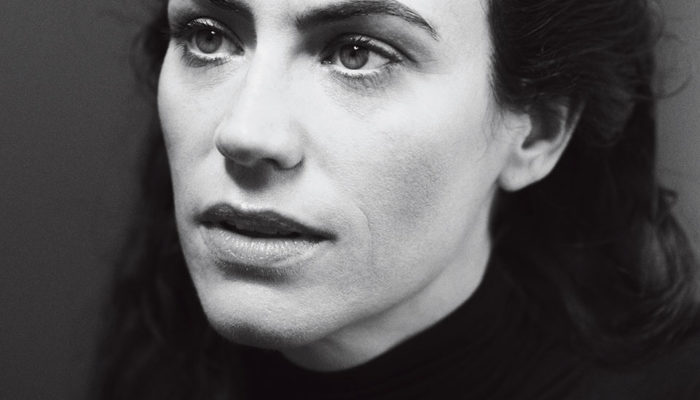 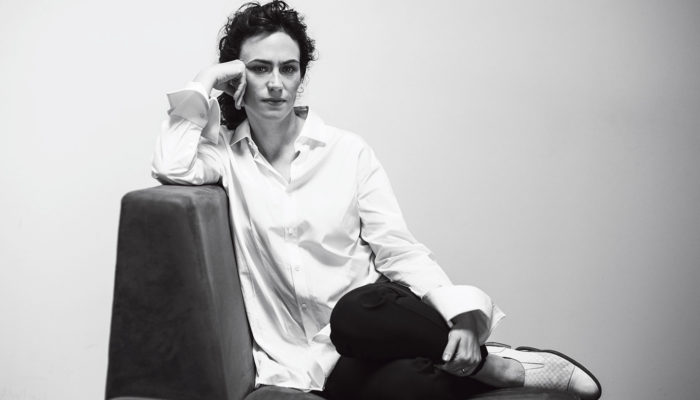 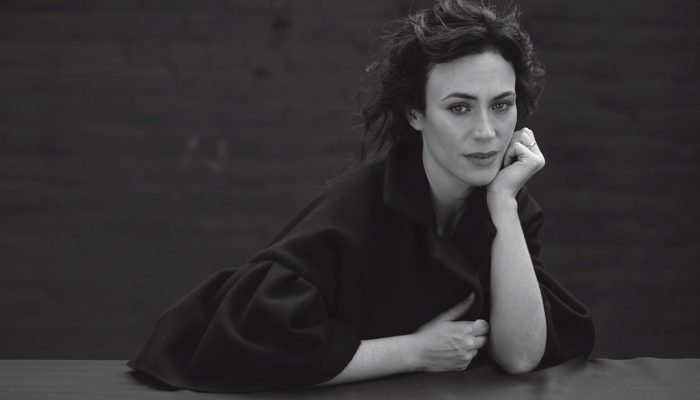 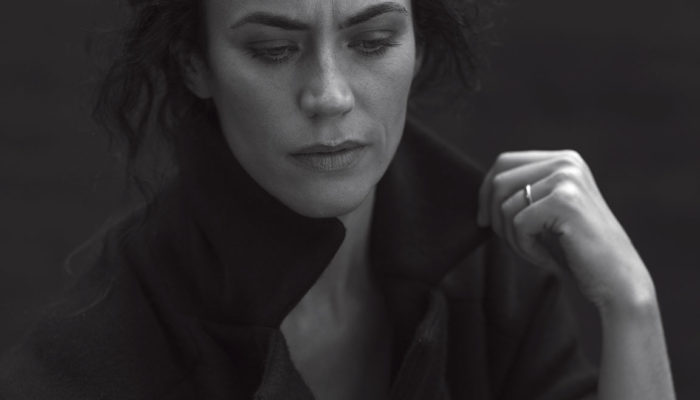 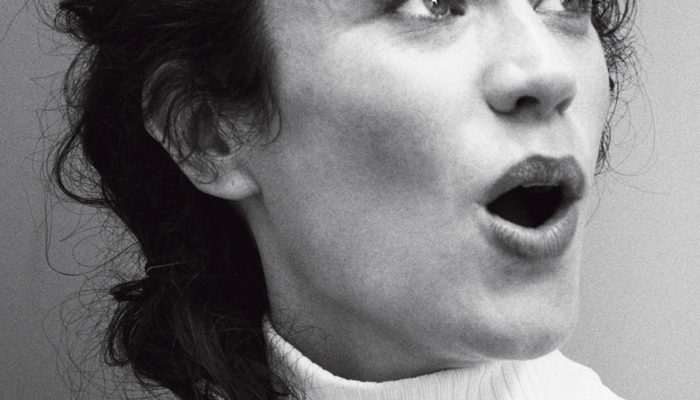 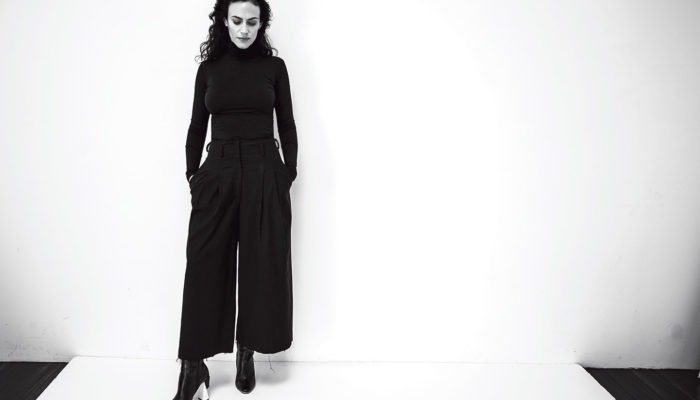