Virgil Abloh brings the fashion world something different for A/W2020

Everyone benefits from a different perspective other than their own.  That’s just one of the benefits of being human.  The ability to conceptualise a different viewpoint within our own heads is one of the things that makes us uniquely human.  The Louis Vuitton A/W2020 menswear campaign takes that idea, deconstructs it and puts it back together again with even more subtext and meaning.  If anyone was ever under the impression that having black people in positions of authority, power and influence within culture made no real difference to society, look no further than Virgil Abloh, menswear artistic director at LV. 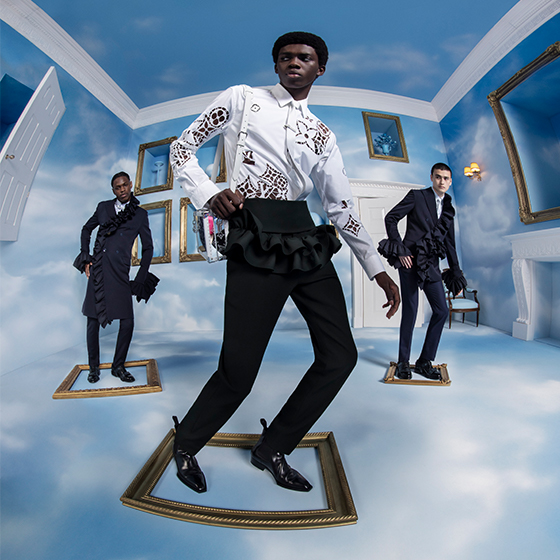 Not only is there the symbolic impact of his presence at the head of one of the world’s most luxurious fashion houses, there’s the new perspective he brings to the job that exposes fashion in general to a new way of thinking that they might have never considered before.  Of course, the first thing that hits your eye with the new campaign is the creative direction.  Set in a room painted entirely like a peaceful and welcoming summer’s sky, Abloh is introducing us to what Heaven on Earth looks like this winter.  Importantly, this time it’s not just the white population who get to live in there, as history has kept implying over the years. 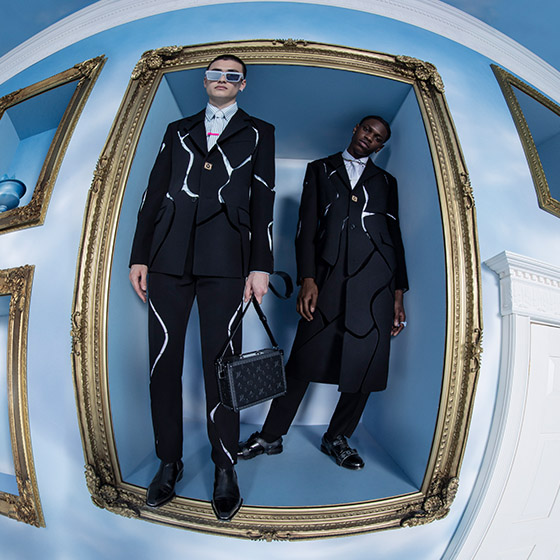 The second new perspective comes from the rarely-used fish-eye lens of photographer Tim Walker.  Combined with the beautiful set design, the fish’s eye view now transports us into the realm of surreal fantasy.  The effect is compounded by the unusual angles Walker shoots from as he plays with the perspectives (there’s that word again) of the room and the definitely non-traditional set-ups with the models.  No matter how good the photographer or the set was however, it would all be for naught if the clothes it was all in aid of were not on point.  Fortunately, this is Virgil Abloh we’re talking about, one of fashion’s most exciting designers.  The tailoring is, naturally, exquisite.  And yet, that tailoring is enhanced even further by embellishments like the extravagant feminine ruffles along the edges and at the cuffs of the coats, jackets and at the waists of trousers.  Maybe it’s the tailoring that seems to be mass of uneven tectonic plates revealing tantalising glimpses of lining through its uneven gaps that grabs your fancy? 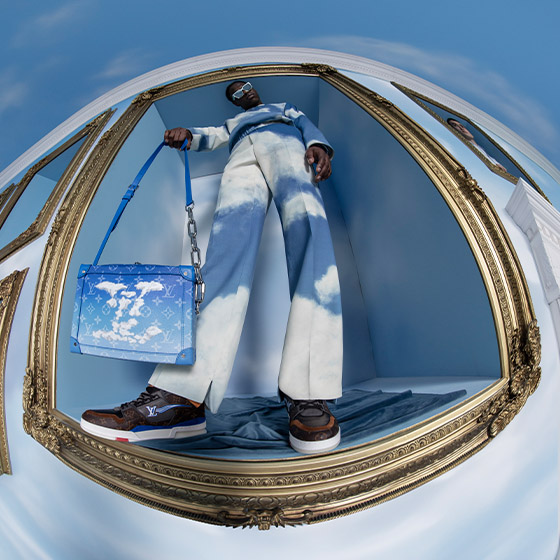 Perhaps most striking of all are the pieces that completely mirror clouds in the sky design of the set.  It’s not subtle, but it is beautiful.  Just like the entire LV menswear campaign coming to a magazine or billboard near to you soon.