The British Fashion Council’s announcement late last year that both mens and womenswear would merge for the new show season out of the pandemic only heightened public anticipation for February’s hybrid standoff.  With significantly more physical activations kicking off than in the past couple of seasons, London amped up its capabilities and made way for some memorable presentations – and afterparties.  Thursday saw a more relaxed series of evening events like cocktail launches and exhibitions but, by Friday, London was in full swing – starting off with key designers like Bora Aksu, Connor Ives and Edward Crutchley.  As each hour passed, there was race to catch the next show another show across London.  Fashion weeks are back.

The highlights from London Fashion Week range from the eloquent roots of African folklore to a surreal 70’s wonderland. 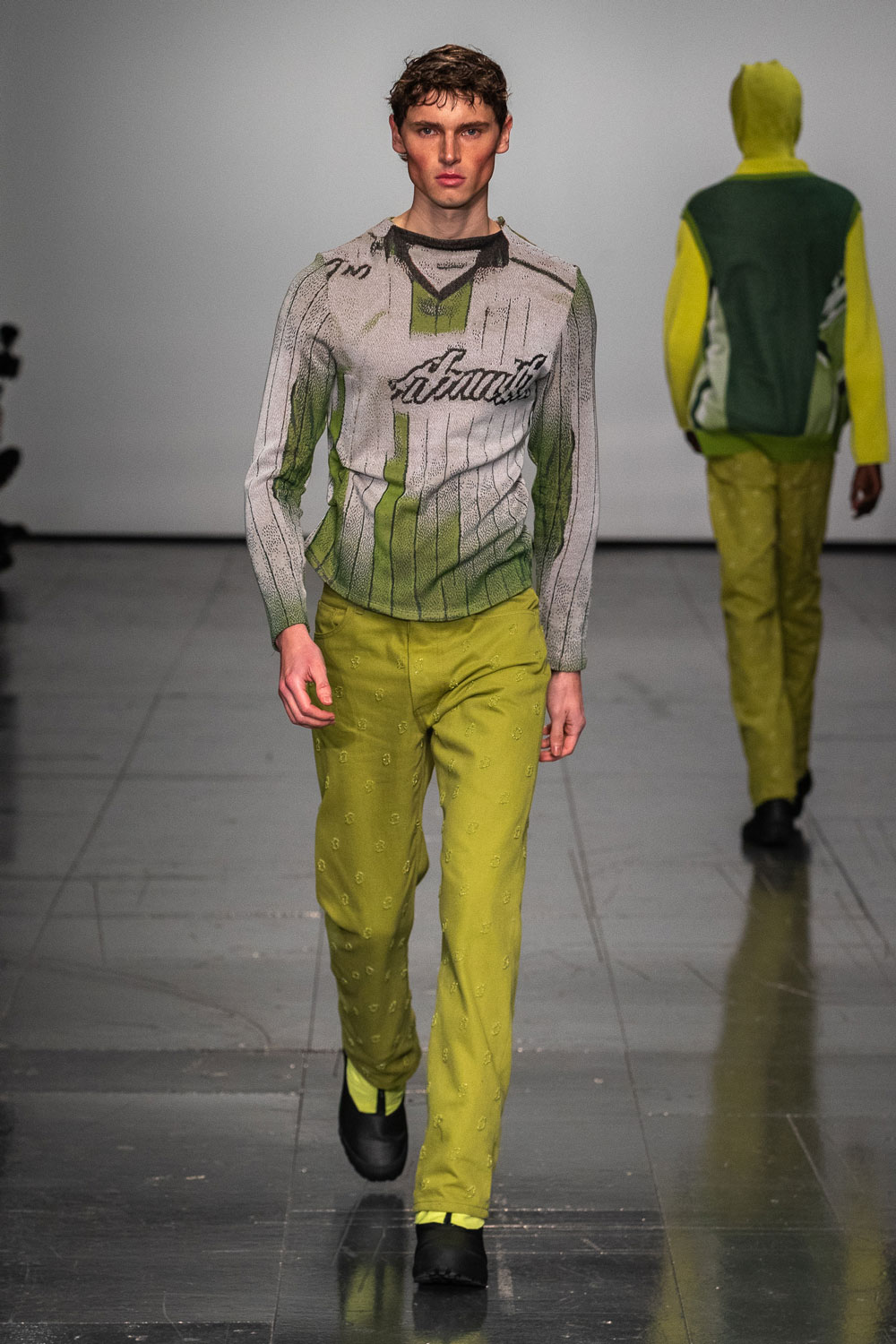 Robyn Lynch reconnected with Oregon-based sportswear company Columbia to sustainably deliver new seasonal looks from a range of reworked deadstock pieces.  With upcycled ocean-waste nylon, jerseys screen-printed onto sweatshirts and heavy-knitted balaclavas, the collection expressed a more personal meaning, with Lynch’s family wardrobe as a core reference for certain looks.  The limited colour palette consisted of anthracite browns, moss greens, ocean blues and steel silvers – all alluding to the outdoor elements. AW22 couldn’t have been more prepared for another one of mother nature’s frenzies.  Jacob Coburn-Blaauw. 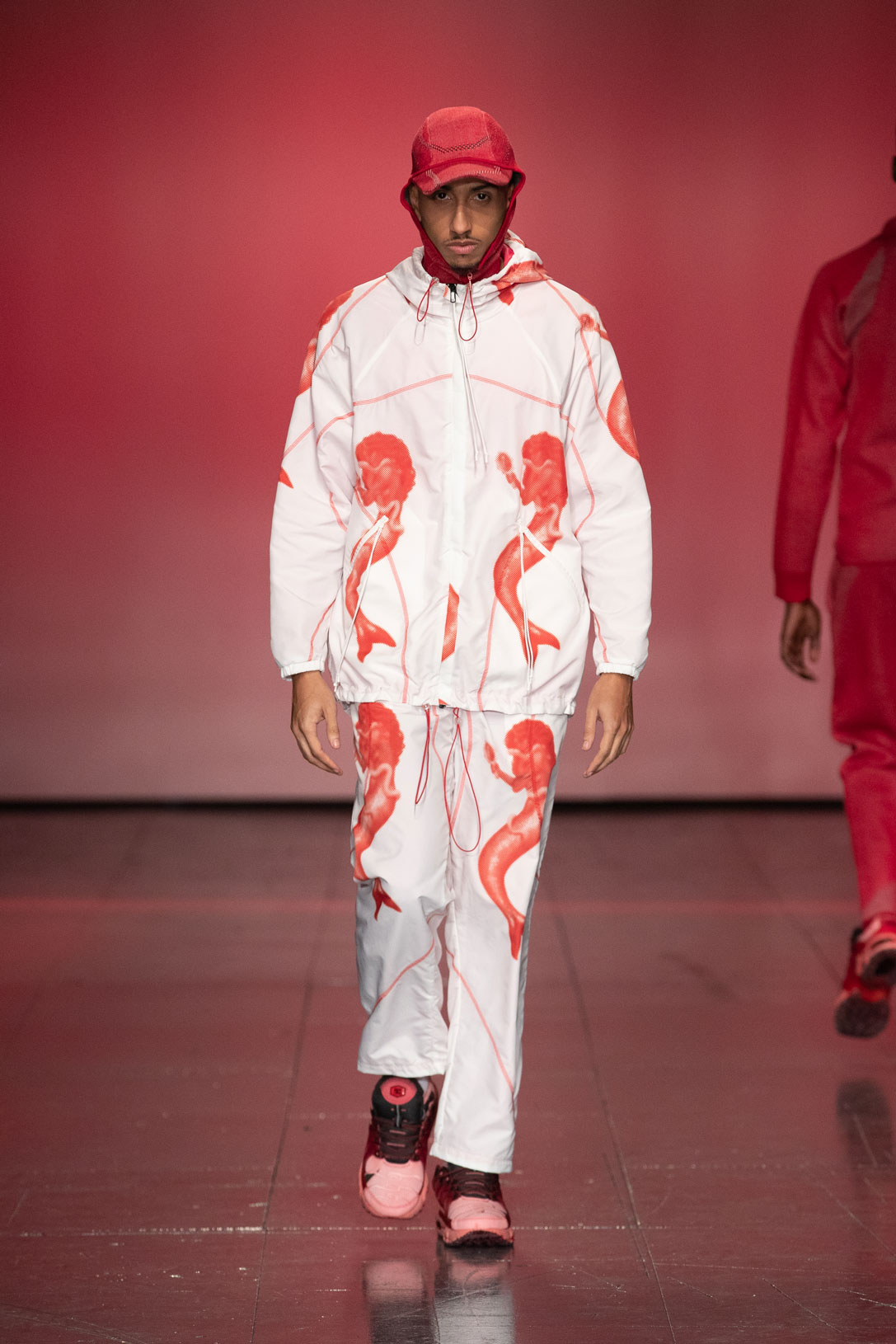 If there’s one thing to say about Saul Nash’s collections, it’s that he always remains true to his roots, and AW22’s RITUAL was no different.  A son of a Bajan-born Guyanese mother, his Afro-Caribbean heritage ran throughout, forming the backbone to the collection.  Conceptualised with correctness, it perfectly conveyed a multitude of cultures and experiences entirely within the waiting area of a Kensal Rise Barbershop.  Acting as a host for the spirituality to run free, select runway looks tapped into African folklore by using prints of the mermaid ‘Mami Wata’ on zip-up track jackets and pants. Symbolising healing and renewal, the collection underscore’s Nash’s rise.  Jacob Coburn-Blaauw. 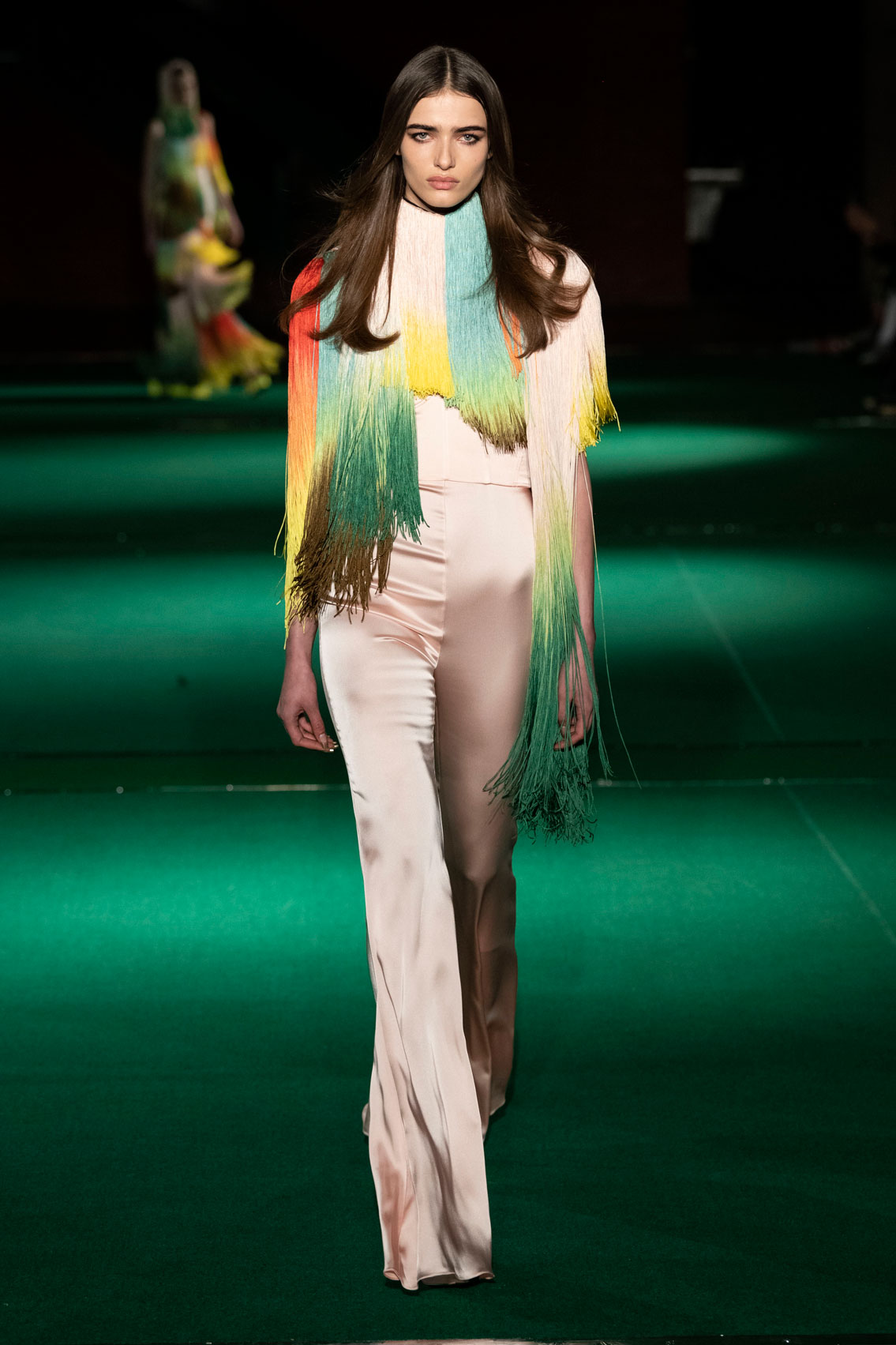 Saturday saw Halpern transcend dimensions of time with its AW22 collection and we travelled back to an era of bell-bottoms pants, jumpsuits and officewear – the 70’s!  An interpretation of the film Madam Satan (1930) made for 34 striking looks that even trifled with couture. Looks previewed pink flared jumpsuits and multi-colour polo necks with offset extensions draped over pale satin.  A glamorous colour palette of pinks, lime greens, deep blacks, navy blues, and glimmering golds only enhanced the collective surrealism of a wonderland you’d never want to leave.  Jacob Coburn-Blaauw. 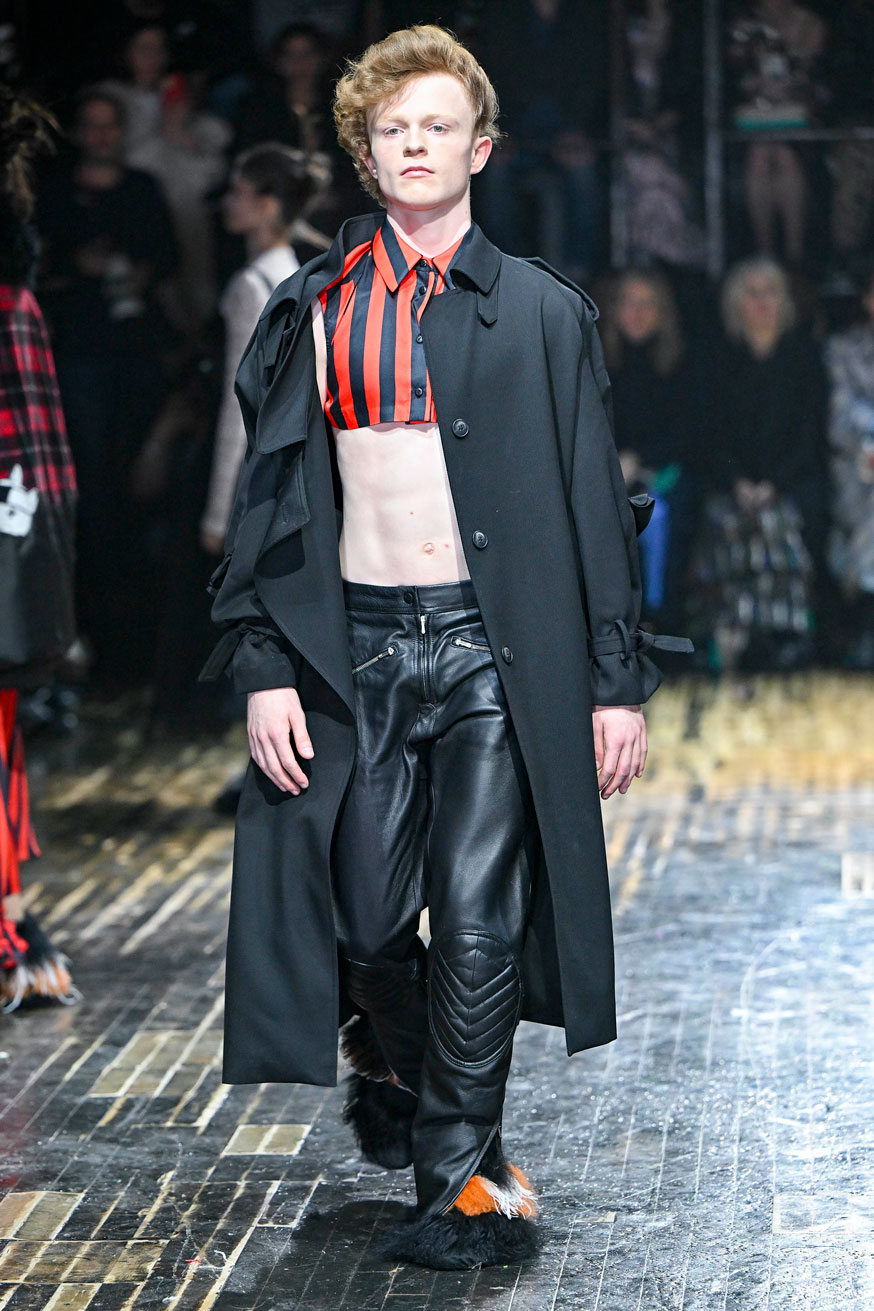 Centred to British youth culture’s rebelliousness, Preen by Thornton Bregazzi embraced apostasy in their AW22 collection. This year diverged from the typical look book and runway fare and instead we were treated to a choreographed dance performance by the English National Ballet School.  That performance captured the post-punk fall out and New Romantics paradigm shift seen in the collection with every coordinated movement.  Layered over floral frocks and skirts, MA1 bomber jackets with ruffled sleeves came in oversized and asymmetrically cropped variants.  Elsewhere longline black trench coat sat over a cropped button-up shirt with low-rise leather biker jeans to accommodate – a stand-out look.  Jacob Coburn-Blaauw. 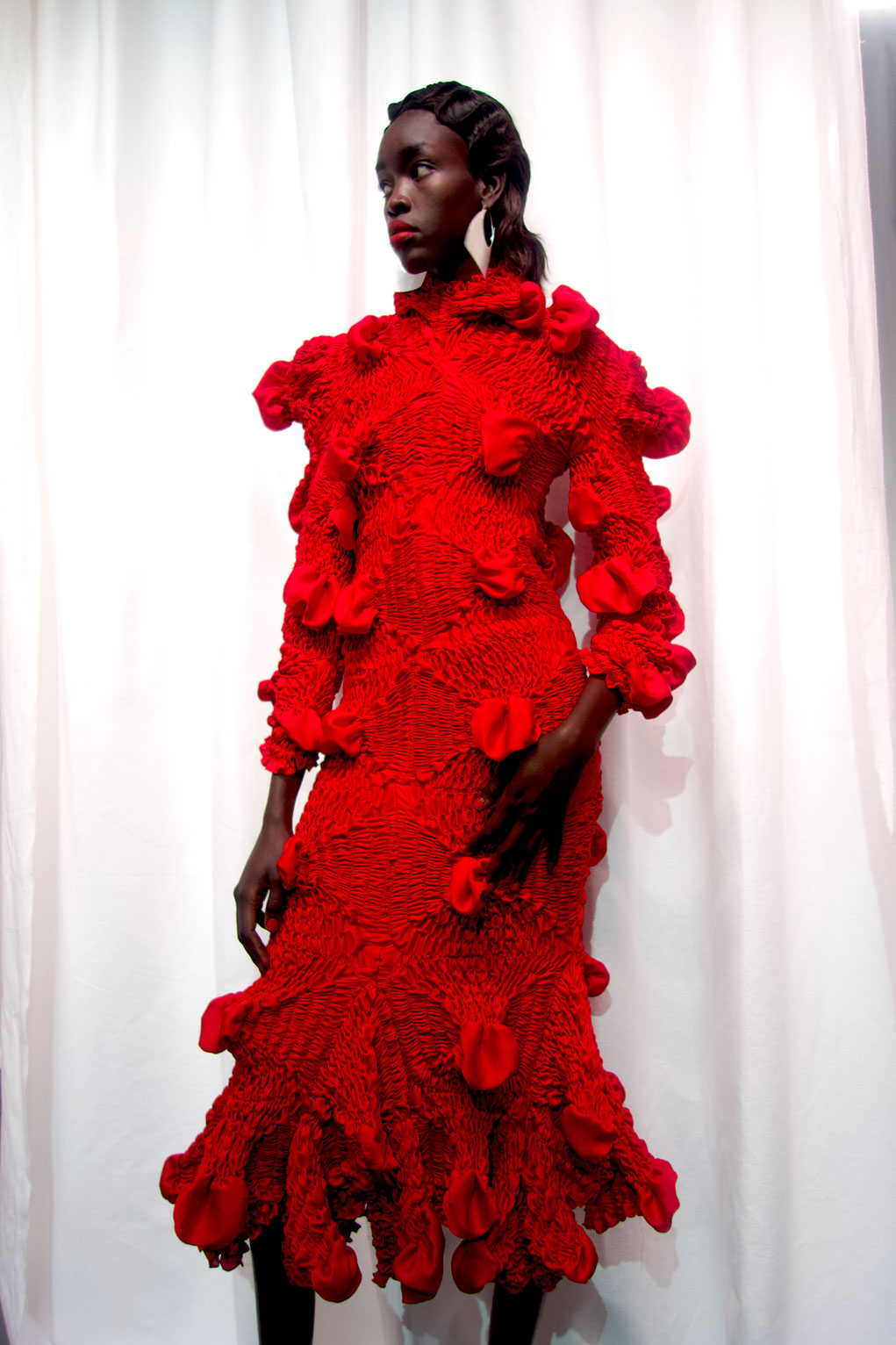 Following on from her debut collection X-PRESSION, Feben’s return to London Fashion Week revealed a second, more concealed layer of sentiment.  Aiming to convey growth in her identity, both personal and professional, this season’s collection entitled Sky unravelled another contemplative knot of emotions. With the opportunity to examine the sharpened jewellery courtesy of Jakhu Studio and their Peruvian artisans – or the polymer bead Eff tote with the signature ‘F’ debossed onto it – the presentation became an interactive experience. `It allowed for a closer look at the collection’s details right before the lights dimmed in preparation for the runway.  The Mongolian faux fur coat represented outerwear stylishly suited for the season and the red ‘twist’ dress was a stand-out that embodied a deep romance. Jacob Coburn-Blaauw. 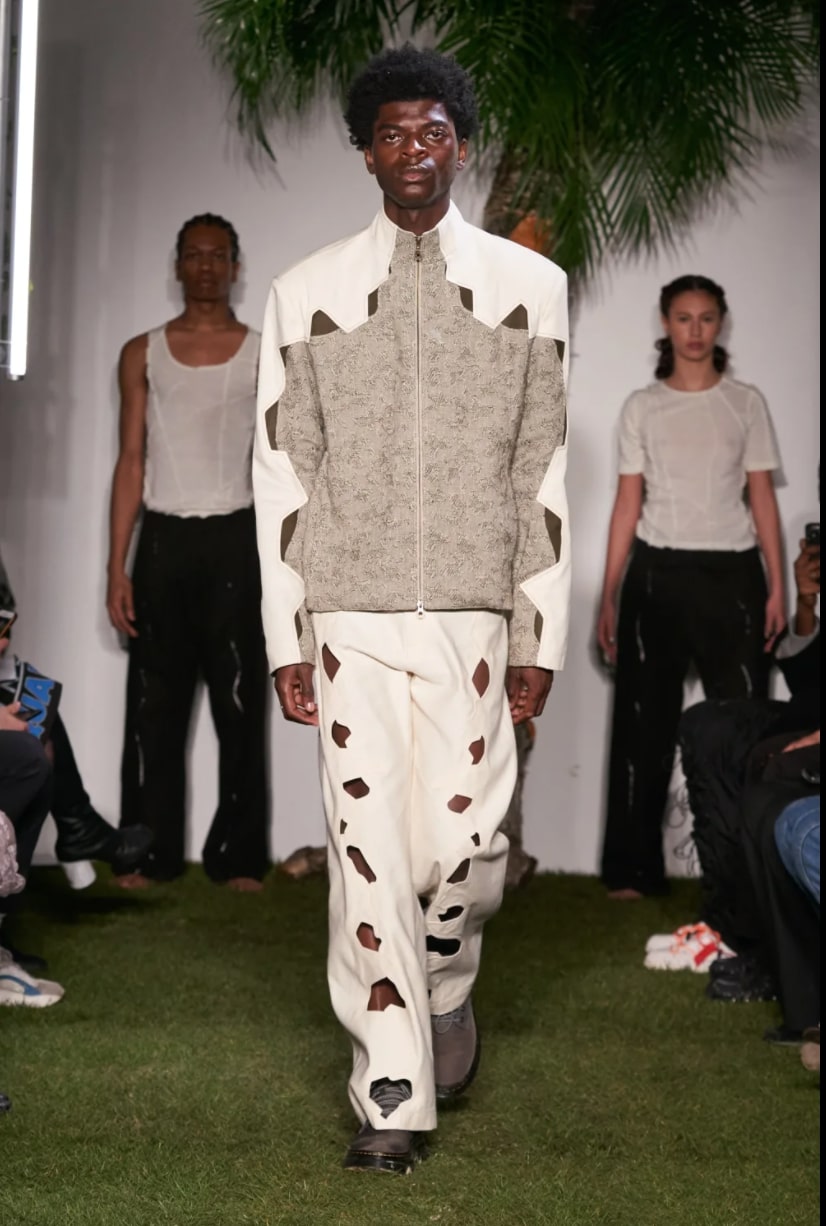 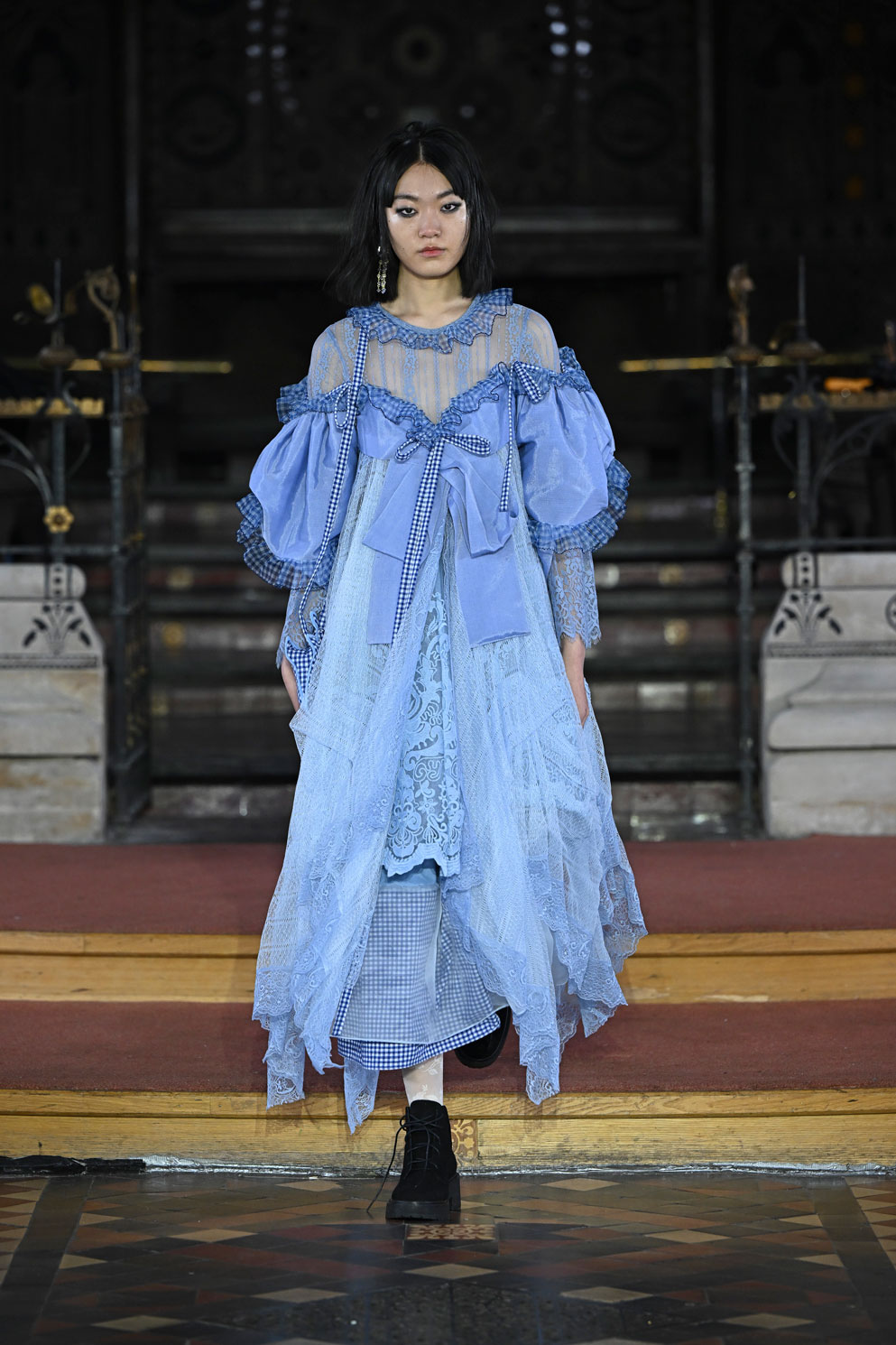 Bora Aksu introduced us to a distinctive combination of classical and traditional styles for AW22 by recreating the renaissance ambiance and paying respect to writer, poet and historian Christine de Pizan.  The new collection channeled de Pizan with an alluring array of voluminous feminine shapes, layered tulle and soft pastel fabrics with monotone amalgamations.  Neil Moodie’s androgynous hairstyles and Janeen Witherspoon’s grunge makeup elevated each outfit’s contemporary tailored silhouettes.  A motif of disobedience ran throughout the collection, with the use of abandoned fabrics and material to create boldly feminine gowns and suits that deliberately challenged traditional ideals.  Georgia Hambury. 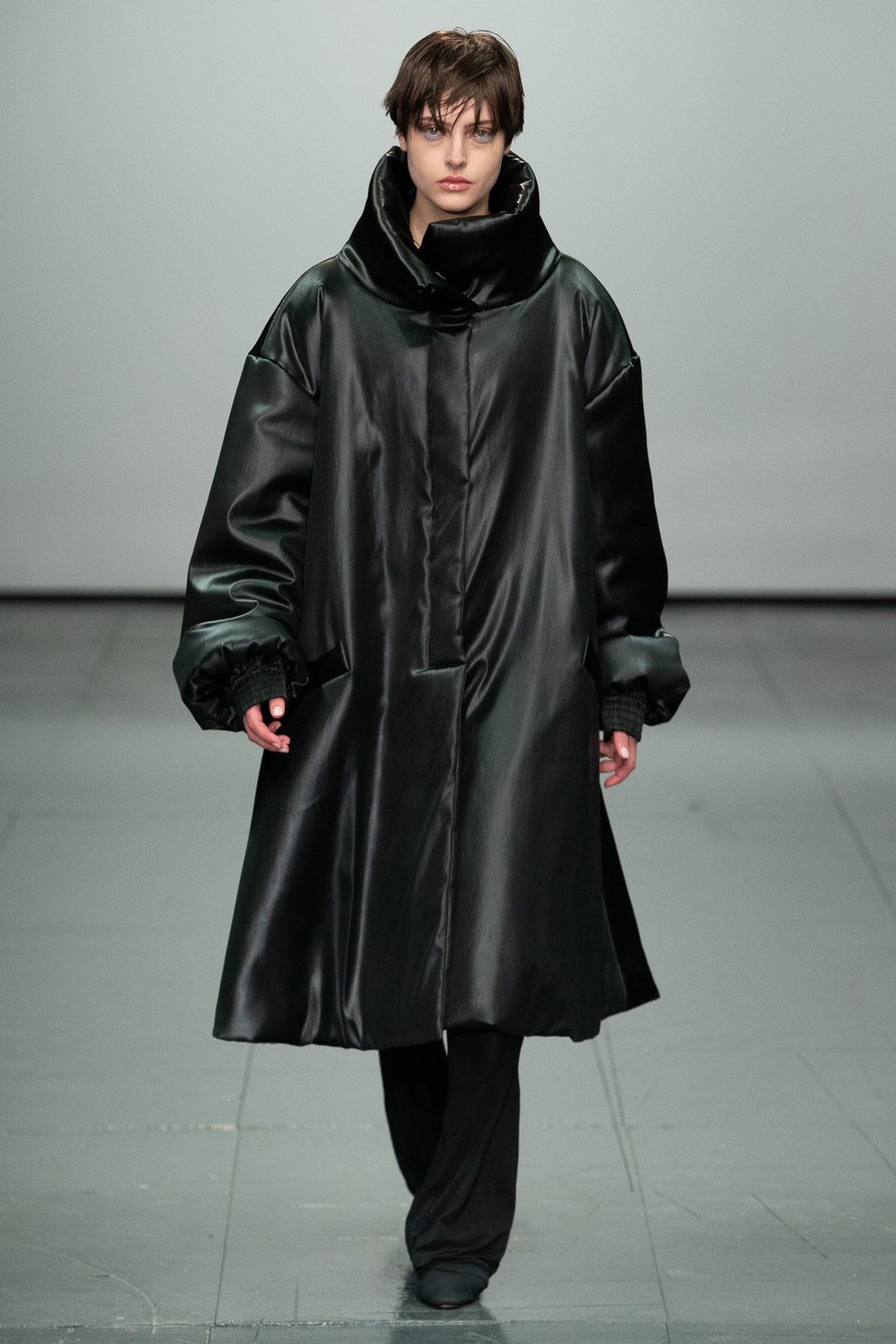 Supriya Lele sits amongst the vanguard of rising British designers securing their footholds in global high fashion.  Lele’s particular path to the top was exemplified by the young, vibrant aura of the new collection for AW22.  Sheer and semi-sheer fabrics came in eye-catching colours with a wealth of asymmetrical wraps, ties and ruching.  Silhouettes were considered and body-hugging (for the most part), and clearly designed to signpost the confidence and exuberance of the wearer.  Alternative viewpoints came with the beautiful oversized leather coats and jackets, particularly the dusty pink bomber jacket with the giant funnel neck and voluminous sleeves, or the luxurious, all-enveloping ‘live in me’ black leather coat. 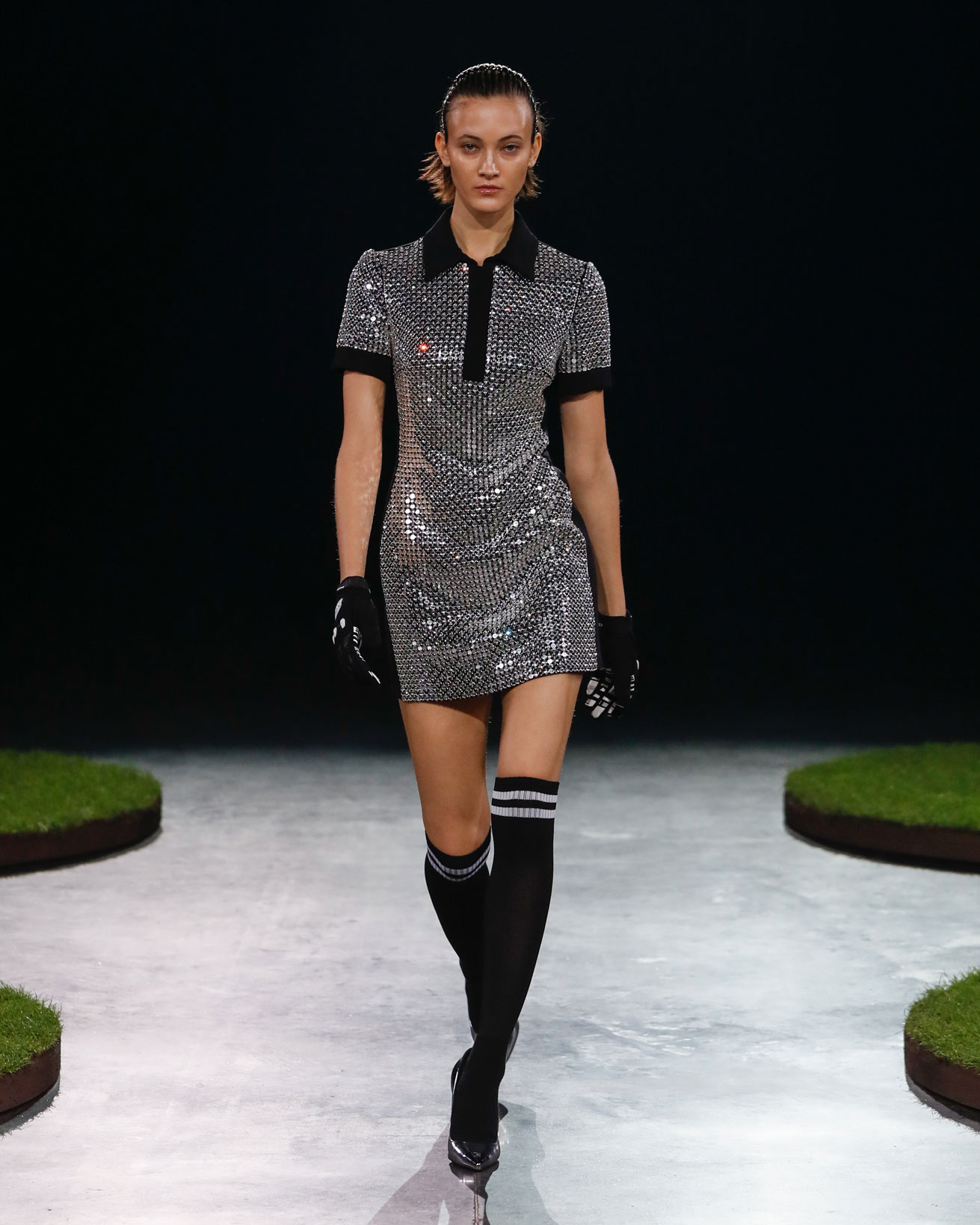 Born in Tbilisi, Georgia, David Koma has a unique observer’s eye when it comes to British fashion sensibilities.  This is what made the LFW show such a fascinating watch.  Seeing your home city through an alternative lens makes for a compelling story.  Sporting culture – particularly football – brought interesting new dimensions to the collection, with half cut gowns revealing an over-the-knee sport sock on the exposed leg and teamed with goalkeeper-style gloves.  Carrying on that theme was the show’s standout look – a polo shirt mini dress encrusted with silver crystals and framed with black accents to the collar, placket and cuffs. 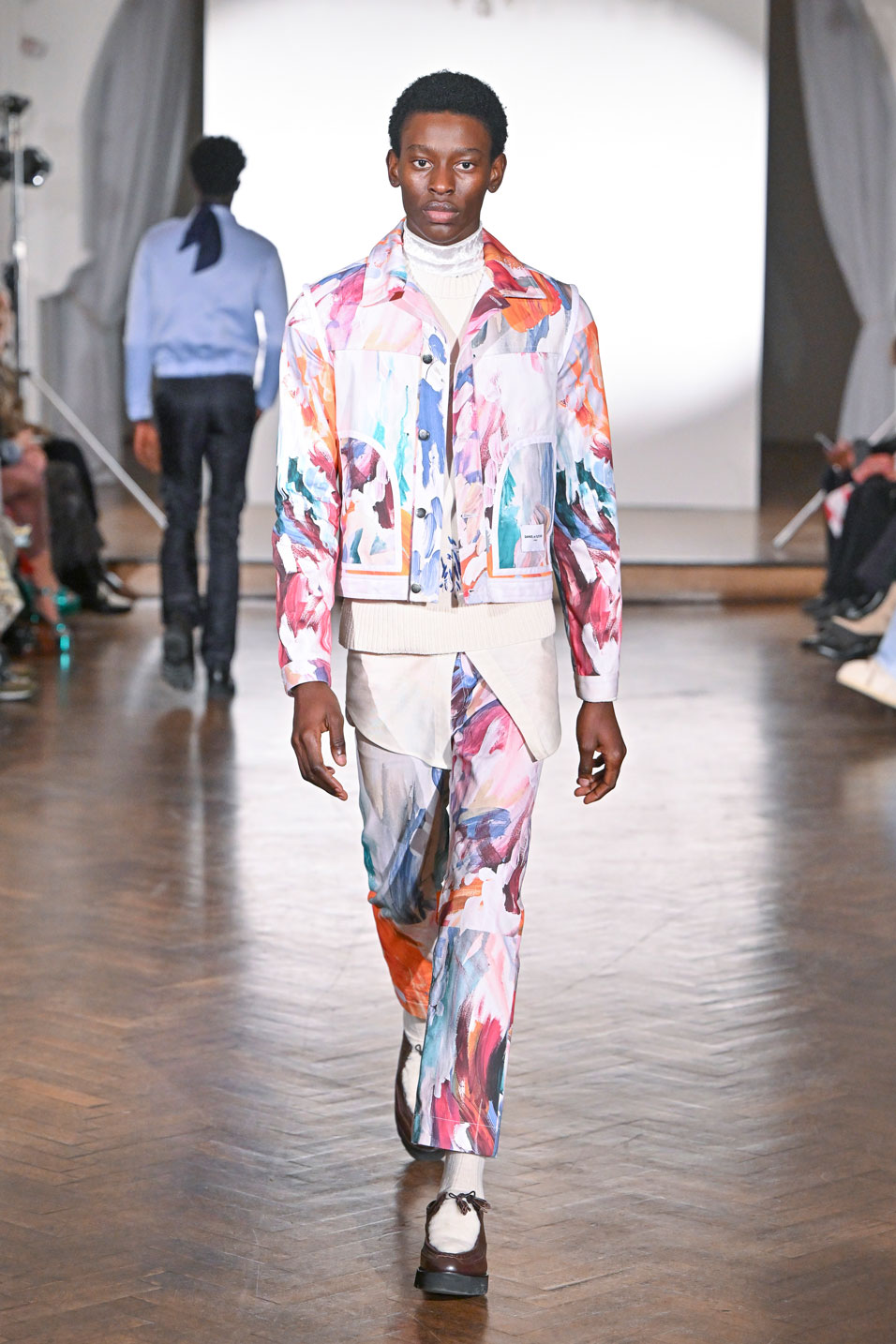 Daniel Fletcher was another at LFW to take inspiration from British heritage for AW22; especially poignant given the collection was shown in tribute to his father who sadly died at the end of last year.  There were welcome nods to classic British tailoring that were given equally welcome twists.  The buttoned shins on the split-hem trousers added an alternative silhouette for the traditional suit look, while exquisitely cut leather blazers polished off with contrast white topstitching spoke volumes for our music culture.  No-one was able to miss the look of the show, however – the denim style jacket and pants adorned with a multicoloured brush stoke print.

To see our last round up for London Fashion Week SS22, click here