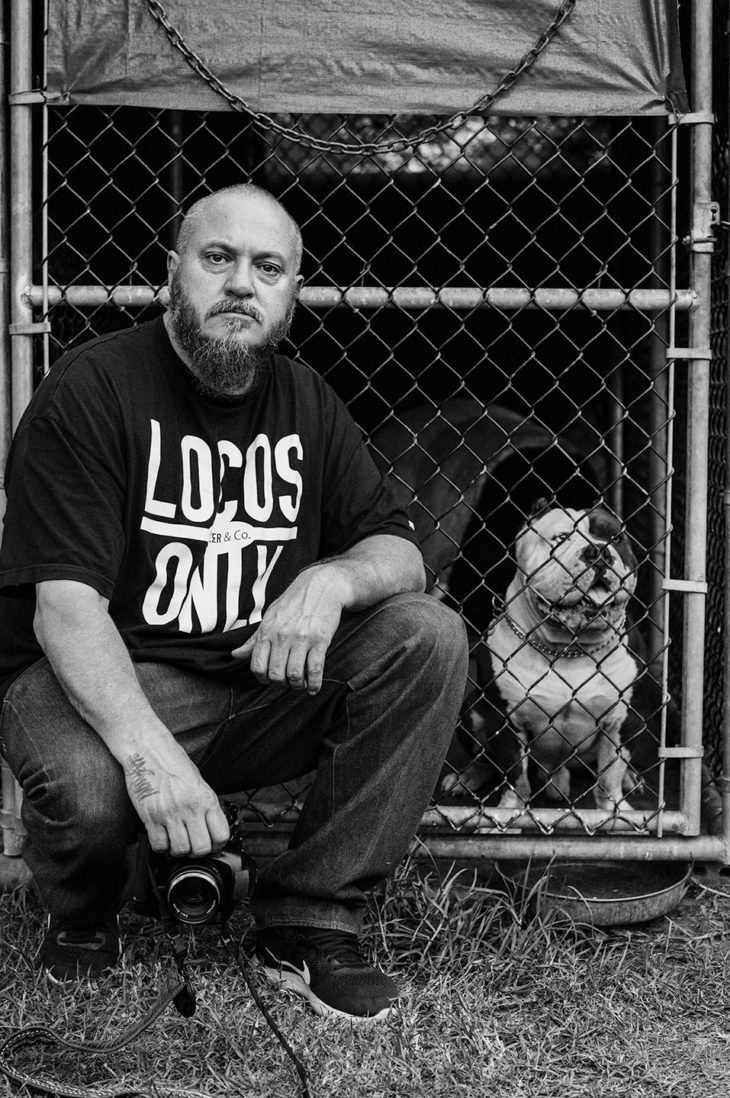 Look down the lens of Estevan Oriol's camera and you'll be transported beyond the tourist traps of Tinseltown to the streets where reality rules and tattoos are tribal.

To the uninitiated LA can be a bit of an enigma. From Beverly Hills Cop to Training Day it has been the backdrop to a thousand movies over the years and because of that people think the ‘know’ LA, even if they haven’t been. Even those who travel there think LA means West Hollywood, Beverly Hills, Melrose, etc.

There is another side to LA.  A side that comes with grit, gravity, and realness coupled with beauty, artistry, creativity and community. That’s a side to LA really worth seeing but unless you have the right guide to show you around and document it for you, you could literally walk right by it and not know. For my photographic director, Alex Lambrechts, and me that guide is photographer Estevan Oriol, a true LA native; imposing in stature but equally as generous with his insights. Alex had been following his work for a while and suggested Estevan would be the perfect choice to do a series highlighting a different but just as significant part of the city and its inhabitants. Estevan has been documenting life in the ‘real LA’ for years and he’s now as much a part of its urban culture and folklore as he is a documentarian of it. “There’s probably people worth knowing I don’t know,” he tells us, “but not that many.”

We first meet Estevan at Kitchen Factory Studios in downtown LA on the first day of our tour. He’s with his long-time friend Gio (who had apparently ‘just got out’), enjoying the sun sitting outside the latest trendy eatery to sprout up in the area, Bike Bar.  This is our first introduction to the old meeting the new. On one hand, we have a myriad of new wave hipsters and trendies passing in and out of the bar carrying all manner of Lattés and pastries. On the other, the original Angelinos who grew up in a much tougher era and who knew the area before it became gentrified.

We’re supposed to meet our first subject for the photo series at 11:30 am. Baldacci the Beast (above) is a local Mexican-American rap star but 11:30 comes and goes with no word from him. It’s a quirk of life that often the best time to discover something new is when you have time to kill.  So, we take a walk around the corner to the infamous Pizzanista, an amazing and achingly hip pizza joint that’s bursting at the seams with full sleeve tatts, trustafarian dreadlocks and white v-neck logo tees. They’re also playing some of the heaviest ska and dub reggae to be heard outside of Reggae Sunsplash in Jamaica. All around the clash of cultures and stations is obvious. Yet, somehow, it’s not awkward or jarring; everything seemingly co-existing in the same easy space.

As if to illustrate this point with a hammer, as I sit outside with Gio, who’s explaining to me that the area was nothing but disused warehouse space and dilapidated buildings before new hipster life was breathed into it, superstar DJ Skrillex nonchalantly cycles by on his custom lowrider bike. “Yeah,” Gio tells me, “he lives just around the corner. Has done for a while now. Estevan knows all those cats – Skrillex, Deadmau5, Steve Aoki – all of them.” As if on cue, Estevan suddenly steps out to find us. Baldacci has finally made contact.

It’s only when we arrive at the home of Baldacci’s sister do we find out that the original choice of shoot location was unavailable to us. Someone had been shot there the night before and it was now cordoned off by police tape, 2 or 3 minutes away from where we are now.  If we weren’t sure we weren’t in West Hollywood anymore, we are now. The front yard has a couple cars up on blocks, there are car parts everywhere and a couple of, thankfully, friendly pit bulls prowl around with curiosity. As he gives us 16 bars from one of his latest songs it instantly becomes clear why Baldacci’s faux surname is ‘The Beast’.

He’s a large and imposing figure with full face and body tattoos, it’s true. But he’s also a beast on the mic, one of the reasons why he’s now starting to move through the industry gears, readying himself to take the west coast by storm this year.  And his surroundings fit his persona perfectly. The gang affiliations are clear to see, it’s not like it’s hidden, but he’s a cool guy, almost humble, and again I’m struck by the juxtaposition between the impression and the reality. Though you probably wouldn’t want to test his patience anytime soon.

“There’s a certain amount of suffering people are willing to go through for their art but when you see a scalp being entirely covered by needle and ink you realise that for some it goes beyond art.”

Visiting with Baldacci crystallised just how important the tattoo is in urban Latino/Chicano culture  – used as it is as a way of identifying who you ‘run with’ as well as a way of showing who you are (or who you want other people to see you as).  At CG Tatts in Downey, CA, we come across big Charlie Brown (not his real name, obviously) getting the finishing touches to his scalp tattoo from long time friend and tattoo artist, Yesca, at his home studio.

There’s a certain amount of suffering people are willing to go through for their art but when you see a scalp being entirely covered by needle and ink you realise that for some it goes beyond art. For some it’s tribal. There’s almost a perverse safety in taking yourself entirely out of mainstream culture in a way that you will never be able to hide for the rest of your life.  There’s something to admire in that kind of conviction and commitment. When you don’t give yourself even the opportunity to sometimes pretend to be someone else you almost have to take a step back and bow.

“Yet, you still have to wonder. A teenager, full of bravado, with ‘Criminals’ – the name of his clique – tatted into his jawline is one thing. But what happens when he’s a 60-something father..?”

Driving through Echo Park with Eriberto Oriol, Estevan’s own 60-something father, we learn a little bit more about the ties in this Latino community and how the generations that have grown up here are resisting the move to gentrification and the loss of what makes this their home.  As he talks I suddenly discover that Eriberto is where Estevan gets all his photographic powers from.  “So, this is a friend of mine, Man One,” Eriberto says pointing to something out of the window.  On the other side of the street we see a giant mural of Eriberto’s face covering the entire front of a building.

This is not illegal graffiti either. This is a commissioned and funded tribute by one of the graffiti scene’s hottest talents, Man One, from the community as a whole to a man that has represented them in art for over 30 years.  “I’m a photographer, I paint, I do a little bit of sculpture,” he tells me. “But it’s photography for the most part.  I’m out on the streets of downtown LA almost every day.  The painting is more of a thought process for me but with a camera?”  he snaps his fingers twice. “That’s just who I am, you know?”

“From gangbangers to captains of industries, he has photographed them all and they have all trusted him because they all understood he was one of the very few that could really tell their stories on camera.”

The streets of downtown LA is as a good place as any to find beauty amongst the city grime.  It’s easy to see why so many photographers love it as a backdrop.  It’s where Estevan takes us to shoot with Maxine Colon, an up and coming songstress once singed with Pharrell Williams who, like Baldacci, is planning for 2017 to be her breakout year.  It’s easy to spot someone who was born for their chosen field and despite the crowds that gather to stop and stare she works the camera like it was just her and Estevan.

As the sun drops, downtown LA is also the place to see what has happened to those who have slipped through the cracks.  Skid Row is a bit of a misnomer.  It gives the impression it really is just one row or street.  Skid Row is almost a district in itself; a whole community living on and making a living from, the streets.  At the end of one of our shoot days, Estevan drives us through the area to make sure we see all sides of the city, from Beverly Hills to Skid Row.  “See that dude over there?” he says pointing to a shirtless guy crossing the road and flexing his muscles.  “Those are the guys I don’t mess with.  How can you be living on the streets and still be all yoked up like the hulk?  Something else going on there.”

We all laugh but it’s probably that ability to see beyond the obvious that lets Estevan see the art where others might only see the image.  And that makes him the photographer he is.  From gangbangers to captains of industries, he has photographed them all and they have all trusted him, no matter what position in life they’ve held because they all understood he was one of the very few that could really tell their stories on camera.

This article is taken from the debut issue of THE FALL, on sale now.