The recent past has established Jonathan Anderson as one of British fashion’s most innovative and creative designers out there. He has managed to constantly delight us with collections that have pushed the envelope season after season.  And so it was for JW Anderson SS23.  The show took place just a few steps from the JW Anderson flagship London store, in a place called the Las Vegas Arcade, a kitsch time portal to a parallel dimension. 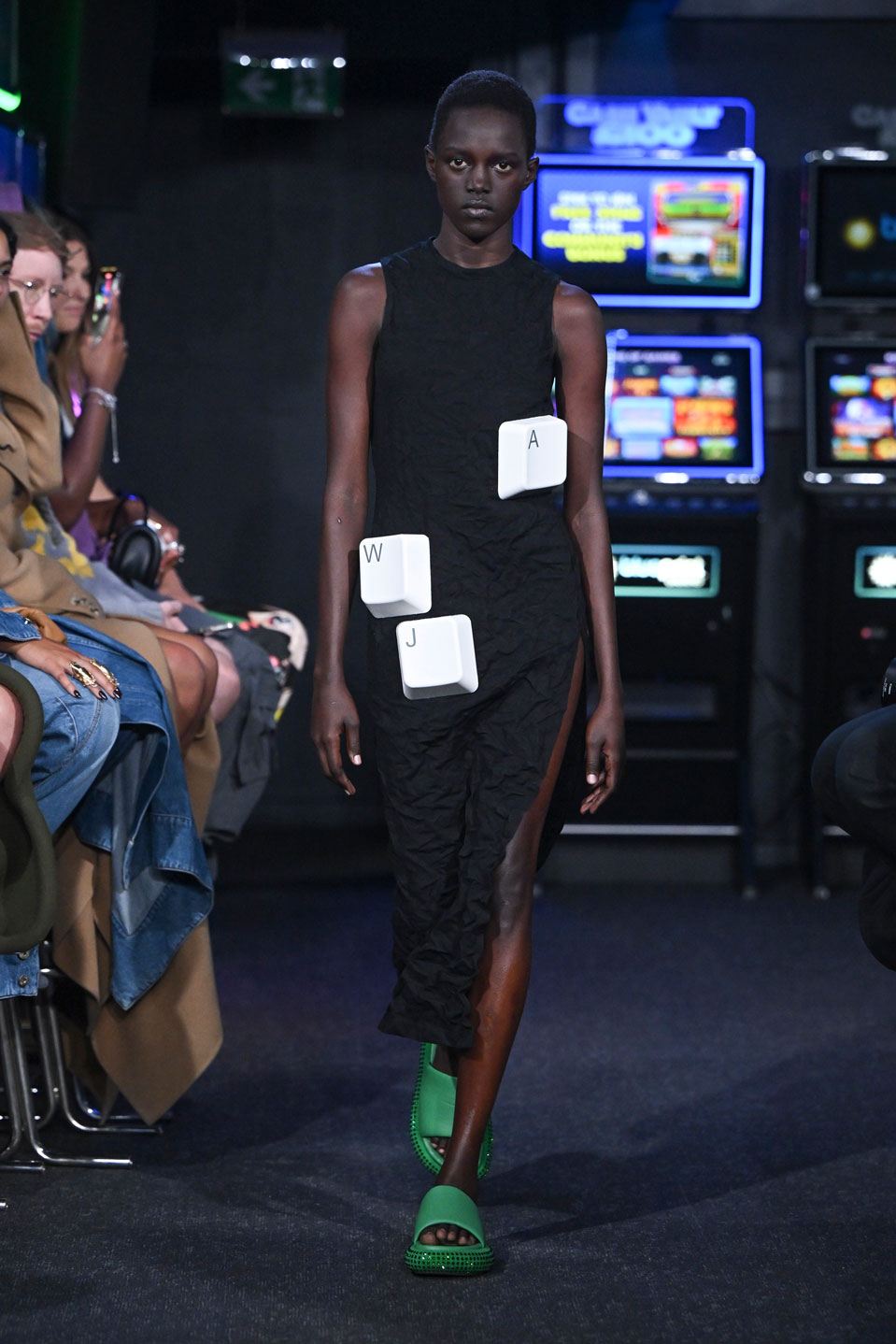 This 24-hour gaming spot, packed with slot machines and multicoloured gaming consoles, was the set chosen by Anderson to be dressed by his creations.  The nostalgic 90s aura that emanated from the gaudy carpets and the stark neon lights transported us all into “a gallery of other realities”. 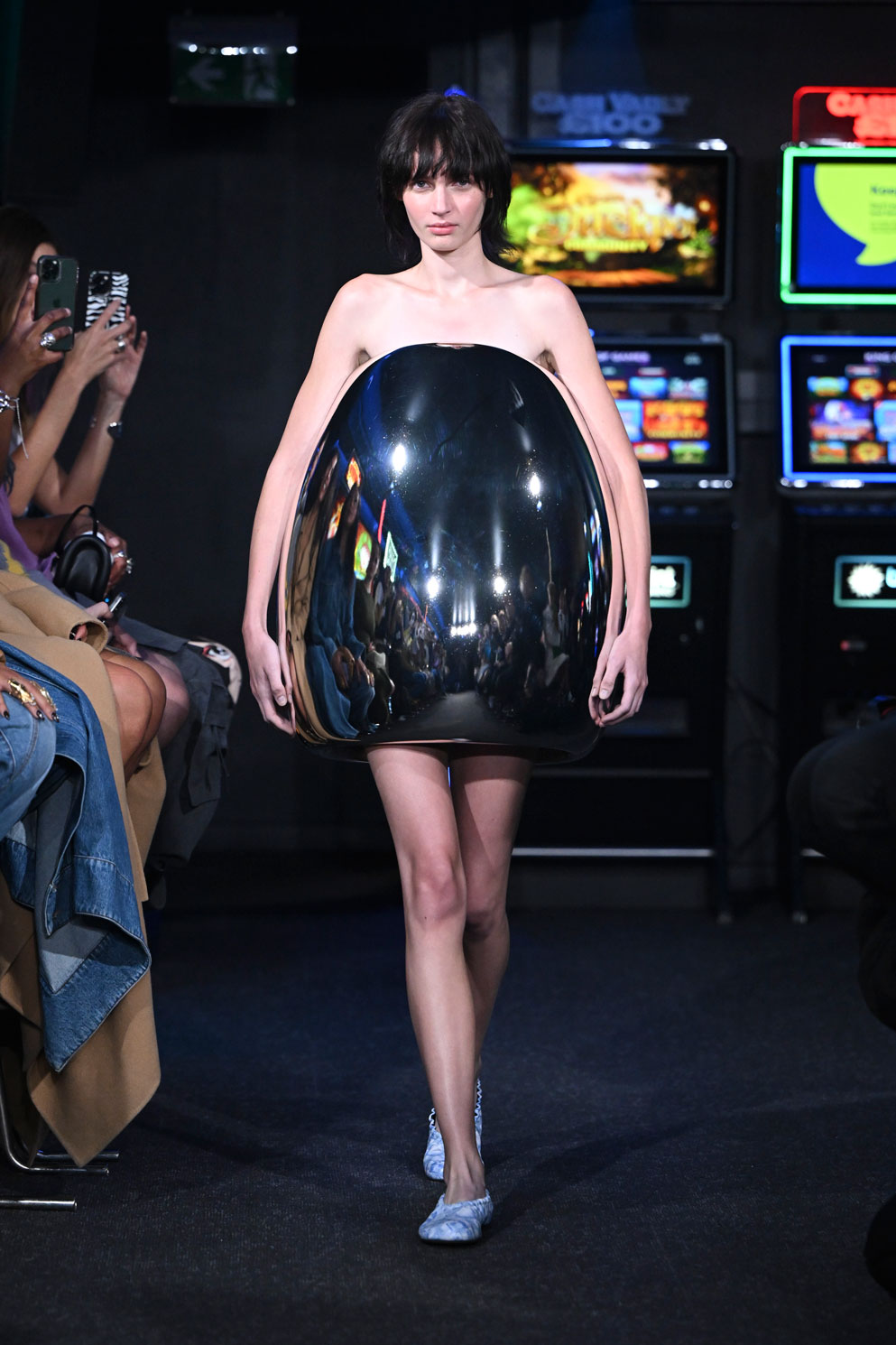 In fact, the collection itself looked to question realism as a concept and our symbiotic relationship with technology.  “Are we becoming our phones?”, was the question posed.  By the looks on show, the answer was clear: technology is a part of all of us now; for better or worse, it has become our new indispensable limb we can’t live without.  On the catwalk, giant keyboard buttons haphazardly adorned long jersey dresses and a metallic bubble-shaped ‘mini dress’ reflected the circuitry and electricity of our enclosed world. 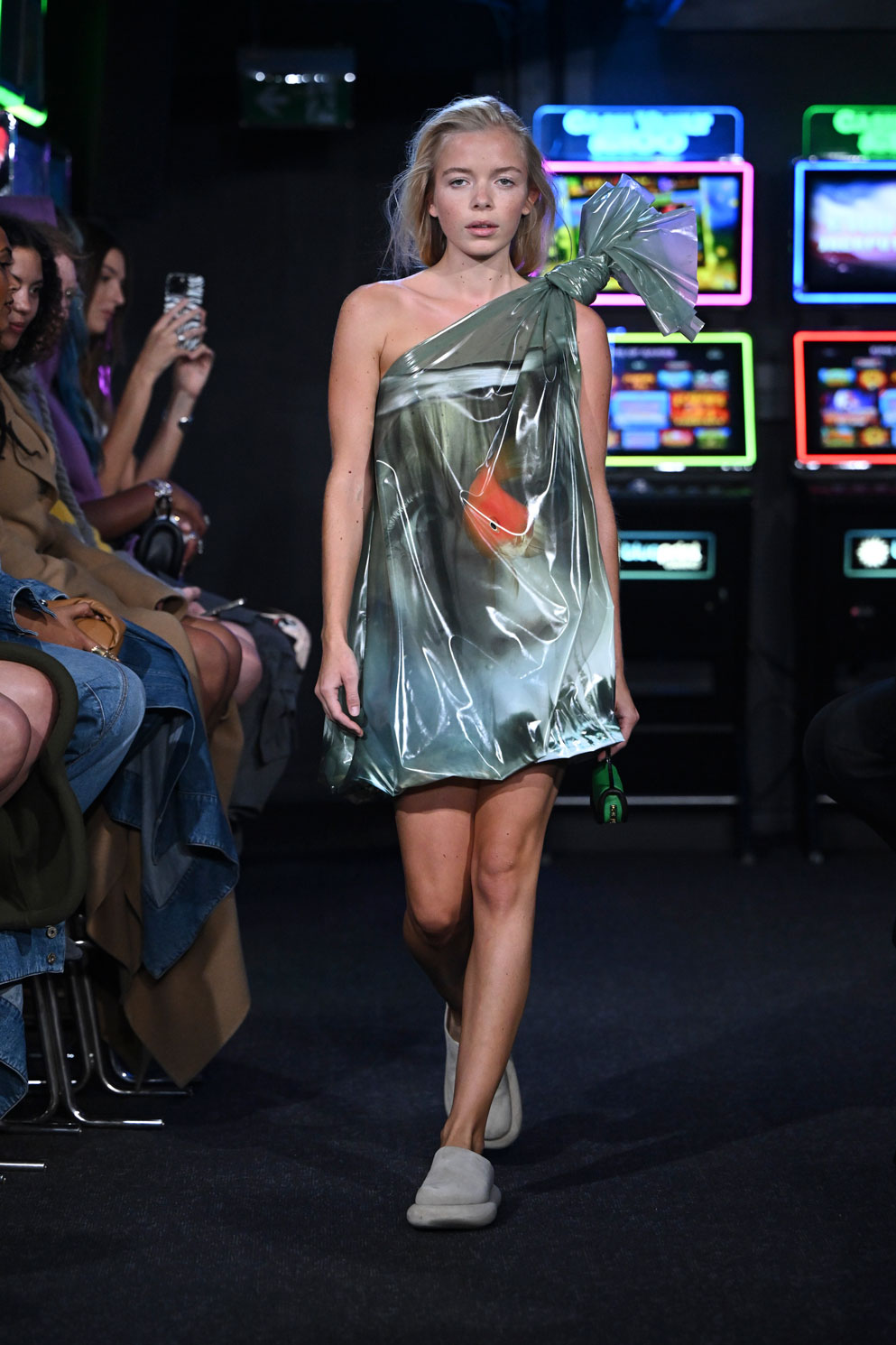 In this arcade hyper-reality, the authentic and the fake became one and everything blended into a single creative language.  We entered the dimension of the surreal where the clichéd fairground prize of a goldfish in a clear plastic bag was reimagined as a one-shoulder mini dress.  Prints of dolphins, palm trees and sunsets were borrowed “from stock digital pictures you find and buy on the internet for a dollar” and used as graphic motifs on bodysuits and tops. 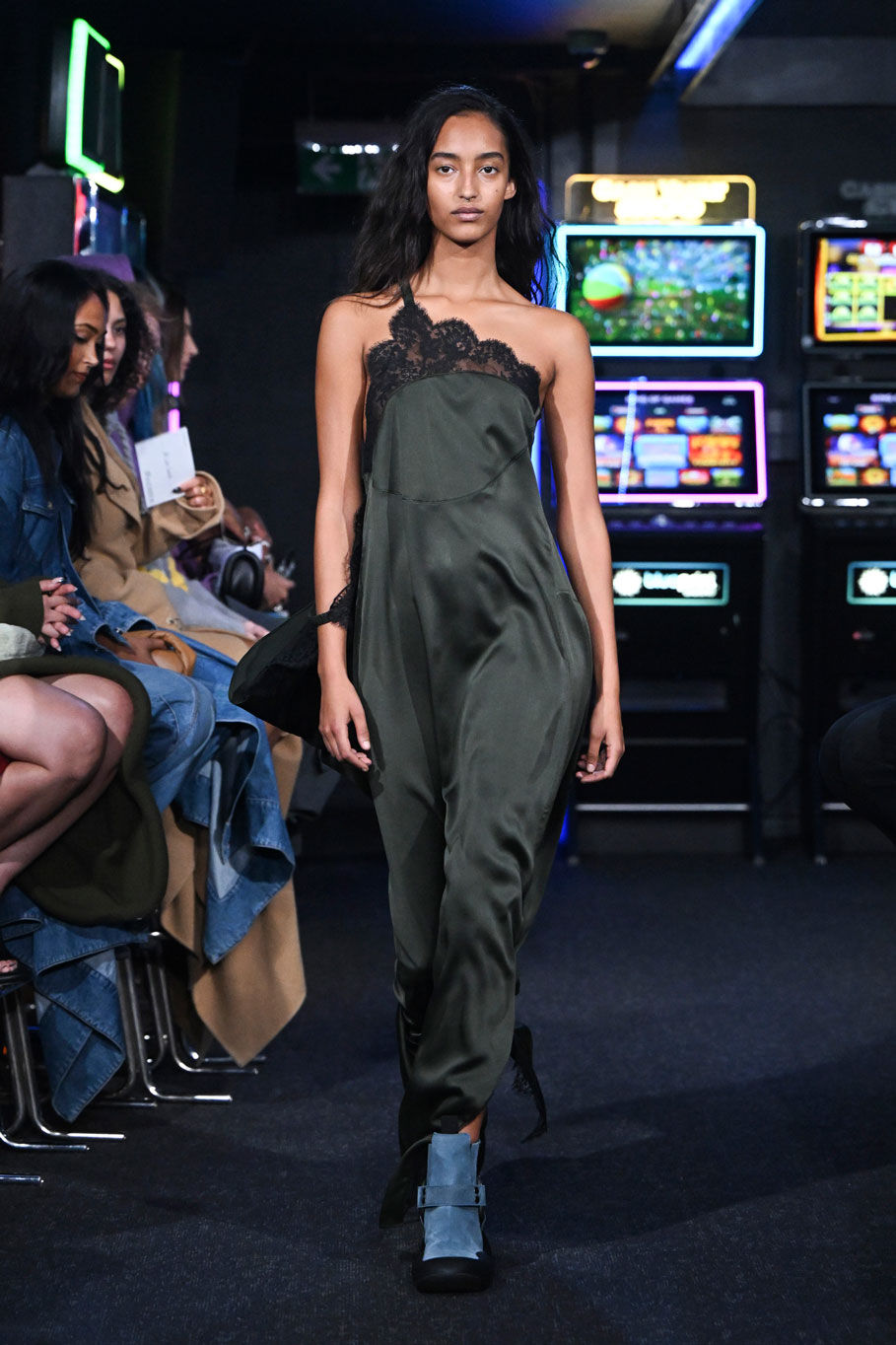 The story didn’t end there.  In the realms of technology and gaming, anything goes.  For SS23, pieces were designed with distorted proportions and irregular silhouettes.  Oversized tees with gigantic washing tags vied for attention alongside one-shoulder slip-dresses fashioned to look like its own bra cup.  In this trippy space you can even wear your clothes upside-down directly by the hanger. 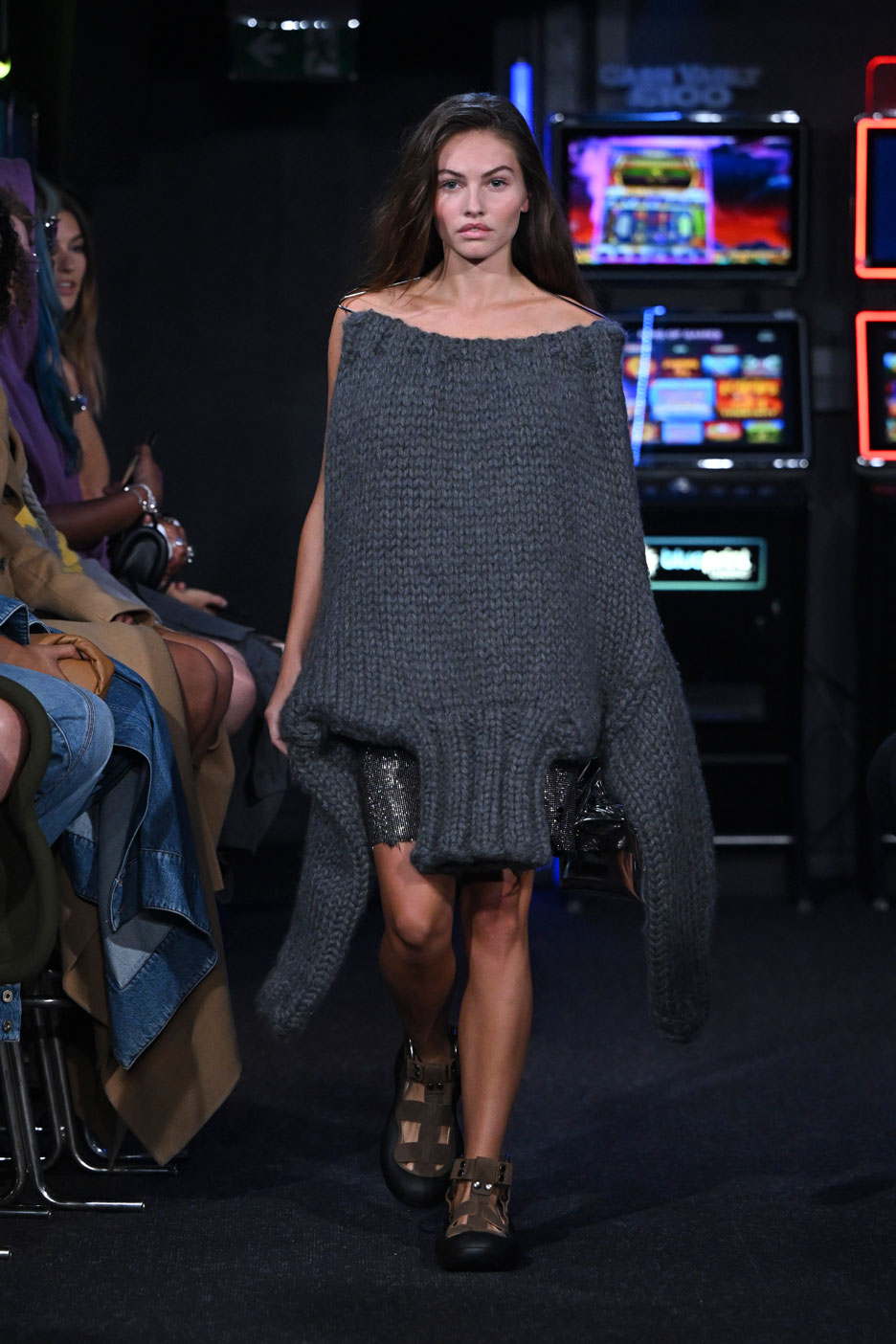 The closing outfit was a not-so-simple-as-it-looks tribute to the Queen.  A sombre long black T-Shirt commemorated Her Majesty with a simple statement.  But it was the near albino white eyebrows and bouffant hair of the model wearing it that provided the anchor back to the surreal.  For both us and JW Anderson, we wouldn’t have It any other way. 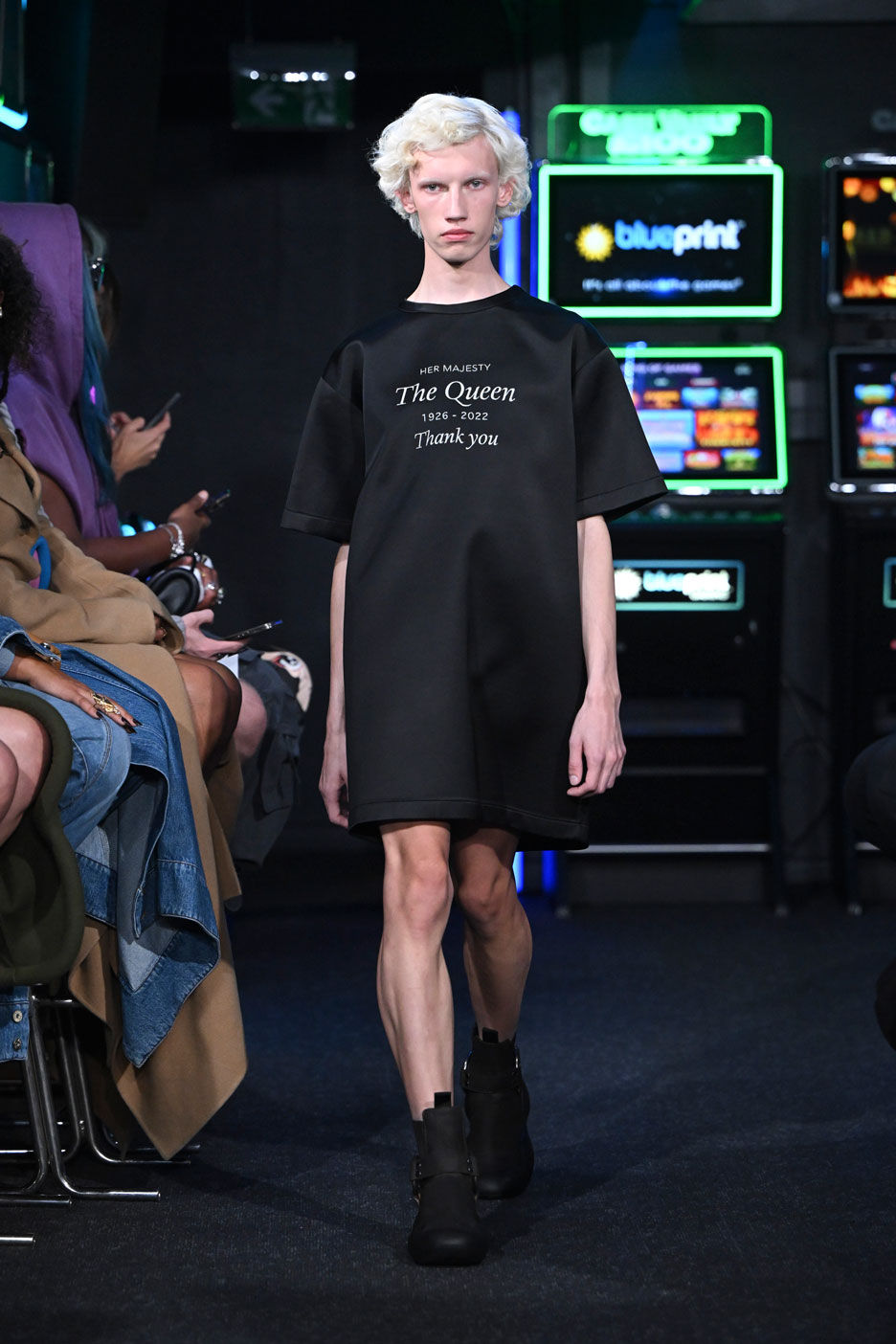