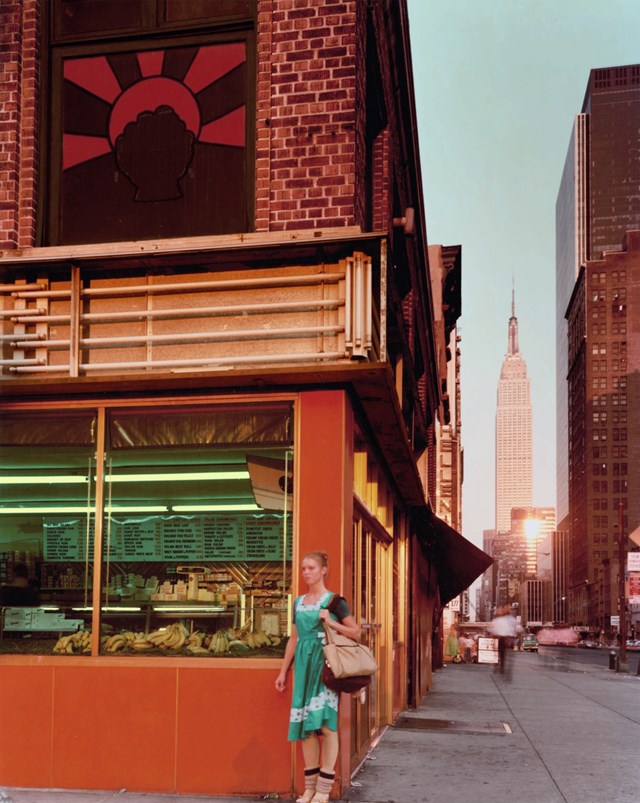 The monochrome image was, and still is, regarded by many a photographer and viewer to inform a composition with a sense of gravitas that colour, more the preserve of advertising, the family portrait or traditional holiday snap, can’t hope to offer. Walker Evans once famously stated, “There are four simple words which must be whispered: colour photography is vulgar.” However, alongside other now legendary practitioners of the form William Eggleston and Steven Shore, Joel Meyerowitz is largely responsible for a mid-20th-century re-evaluation of colour photography as a significant art form.

An exhibition of work by Meyerowitz currently showing at the Beetles + Huxley gallery in London highlights the photographer’s seminal street photography and traces his gradual move from using both black and white and colour film to a focus on pure colour, over the course of two decades.

Born in 1938 in New York City, Meyerowitz studied painting and medical drawing at Ohio State University before working as an art director at an advertising agency. Having seen Robert Frank at work, Meyerowitz was inspired to leave his role in the advertising world in 1962 to pursue photography. Just six years later the first a solo exhibition of his photographs was mounted at the Museum of Modern Art, New York. Hope for anyone looking for a swift and meteoric career change.

The exhibition features work made by Meyerowitz between 1963 and 1978, from his very early days shooting in black and white on the streets of New York alongside Garry Winogrand and Tony Ray-Jones, to the year he published his first book, “Cape Light”. This period was vital for Meyerowitz as he began to question the medium of photography itself, engaging in an aesthetic exploration of both form and composition. He moved away from what he describes as the “caught moment” toward a more non-hierarchical image in which everything in the image, including the colour, plays an equal, vital role. These intricately structured images, which Meyerowitz calls “field photographs”, marked a seismic shift in the history of photography.

“If we accept the idea that a photograph basically just describes things, then a color photograph describes more things, that there is more content in color and I wanted to see what those kinds of photographs might look like.”

“Because of using colour my efforts on the street moved away from the ‘caught’ moment toward a more dispersed observation, toward an image in which everything played an equal role; the people on the street, the architecture, the quality of the day, the angle of the light, the weight of the shadows, the simultaneity of minor events.”

“This overall-ness I called, ‘field photographs’. I meant them to be about the ‘experience’ of being on the street, in that specific city, on that day, in that precise season and year, so that viewers might experience for themselves what it felt like in that moment.”

Joel Meyerowitz: Towards Colour 1962 – 1978 is at Beetles + Huxley until June 24th. All images courtesy of the gallery.