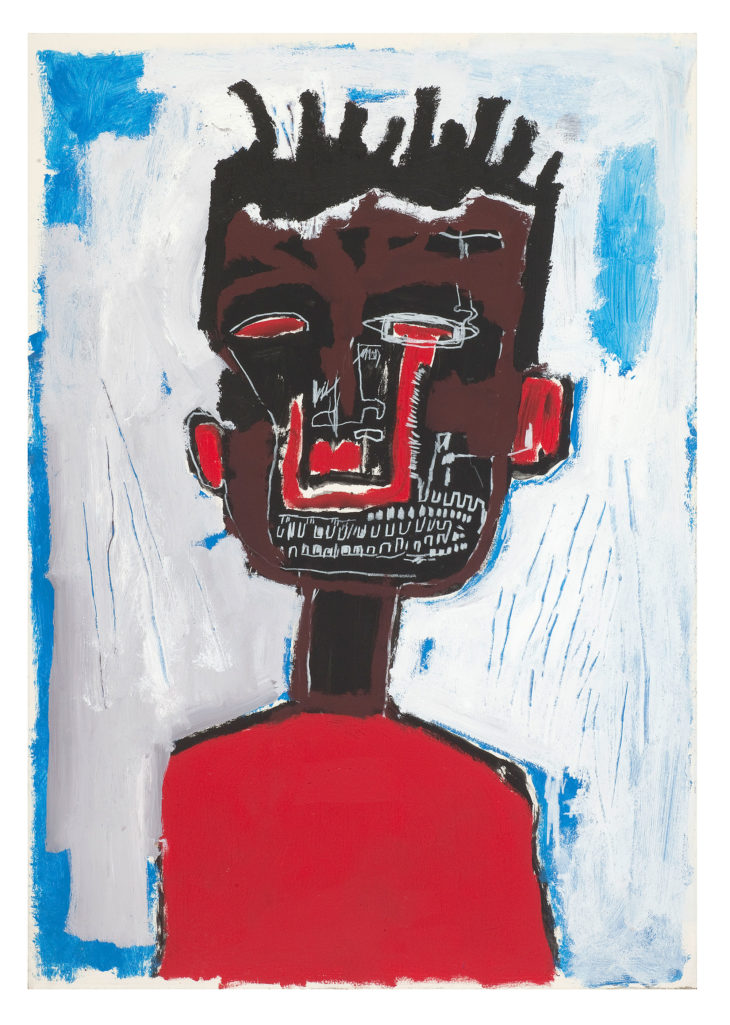 Featuring over 100 works including film, photography and archive material, Basquiat: Boom for Real at the Barbican is the first ever large-scale exhibition of the cult artist's work in the UK.

This exhibition of Jean-Michel Basquiat’s work at London’s Barbican arrives at a time when the artist’s relevance and influence can be palpably felt in the now, just shy of 30 years after his death. The once-homeless tearaway turned NYC art-world favourite became one of the most famous artists of his generation by transferring his experiences of marginalisation, police brutality and racism onto a canvas with abstraction, finesse, and poignant resonance. The injection of a personal experience, illustrated by use of skulls, crowns and self-portraiture induced a new narrative into an otherwise homogenous landscape. Whilst reluctant to explain or decode his work, Basquiat once commented that “the black person is the protagonist in most of my paintings, I realised that I didn’t see many paintings with black people in them”.

A contemporary, friend (and occasional collaborator ) of Andy Warhol, Basquiat’s rise to fame happened when fame was itself a commodity, helped by the induction of television into the home and rise of the now ubiquitous persona of “celebrity”. The artists of 1980s New York were often caught between a tide of self-expression and the commodification of this expression as art and Basquiat was no exception. His “CV” (which sold for $50,000) listed education (purposefully misspelled) as ‘NIL’, but was supplanted with an admirable list of cool artists and authors as references. He dated Madonna before she was Madonna, created experimental music under his band Gray, and amassed a cult following and media obsession that saw the artist expand into modeling for Commes Des Garcon, and an addiction to heroin that led to his death.

Any long-term fans of the OG American rebel (and fans of contemporary hip-hop) might have clocked Basquiat’s name chirp up in lyrics from Jay-Z, Kanye West and A$AP Rocky or his iconic hairstyle replicated by the likes of Jaden Smith and The Weeknd. His fashion style, now widely imitated, was nicely exemplified by the way he would turn up to events in £1,000 Armani suits splattered with paint, fresh from his studio. This collision of high-value designer with a laissez-faire sentiment can be seen channeled in the abundance of “drawn on” trainers and jackets of London designer Ryan Hawaii, paint-stained denim from James Long and the tactile exploration and deconstruction of Virgil Abloh’s designs for Off-White. Even established London fashion boutique Brown’s has just announced a Basquiat capsule collection, which sees the artist’s work emblazoned on hoodies, jeans, denim jackets and skateboards.

Basquiat’s beginnings were on the street and at 17 years old, he shaved the back of his head and left home. With his good friend Al Diaz he began leaving epigrams around the streets of lower Manhattan, on old walls and discarded furniture, short and insightful words could be read all tagged with his moniker SAMO, a portmanteau of  “same old shit” a reference to the low quality weed he was smoking at the time. For context, and to compare the scope of Basquiat’s legacy, an untitled Basquiat painting recently shattered world-records by becoming the most expensive artwork to ever be auctioned, going to a Japanese collector for the tidy sum of $110.5m.

UK street artist Banksy used the new exhibition to call out a discrepancy in the art world’s behaviour toward graffiti with two new murals of the walls of the Barbican. The anonymous artist highlighted that whilst art institutions are more than happy to showcase a ground-breaking retrospective of Basquiat’s work now, street-art (where Basquiat began) is fecklessly removed from its walls and discredited as bothersome, low-brow and even criminal. Basquiat’s short trajectory from homeless youth to media-hounded artist to a fatal drug overdose at 27 years old is a story that we’ve seen replicated in many different forms in the likes of Amy Winehouse and Kurt Cobain. By bringing the artist’s work together, an observation of Basquiat’s paintings and the sometimes uncomfortable relevance to modern society is an ample window of cultural self-reflection, and a chance to examine how we foster our relationships between media, art, and artist. 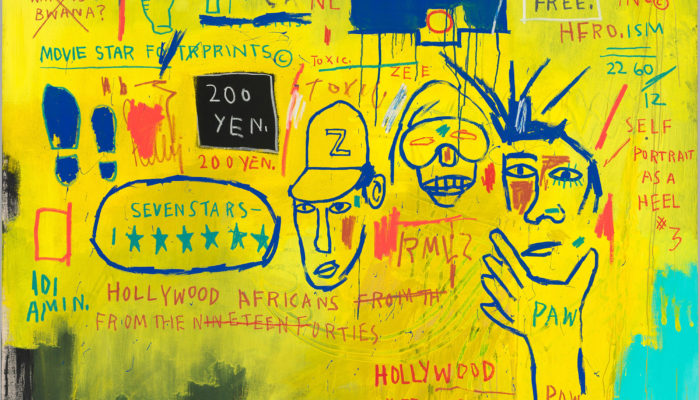 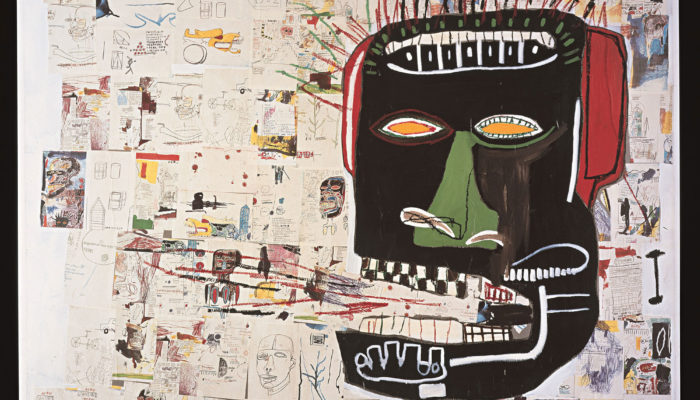 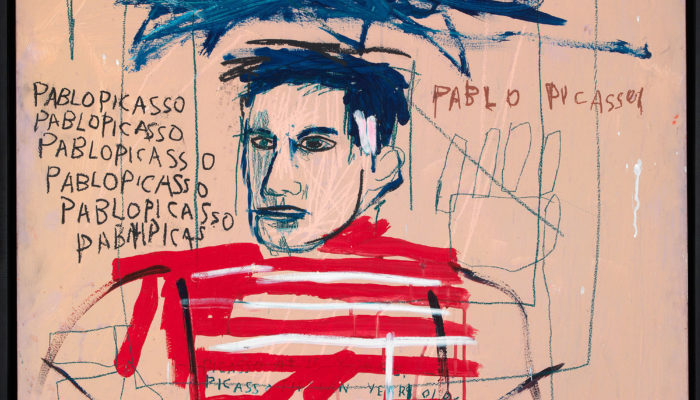 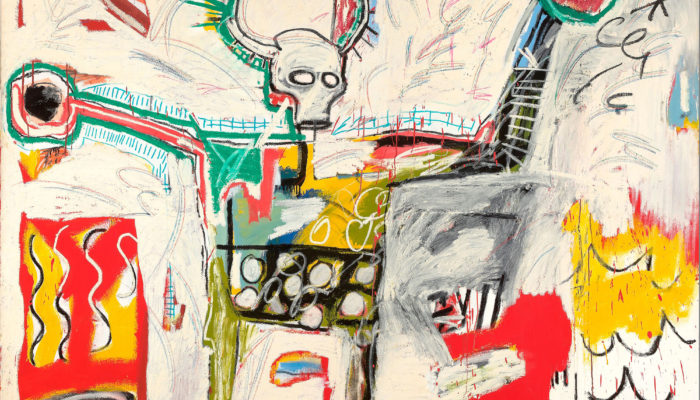 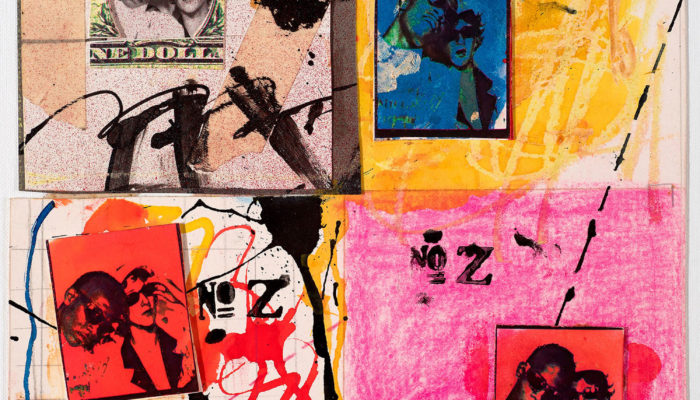 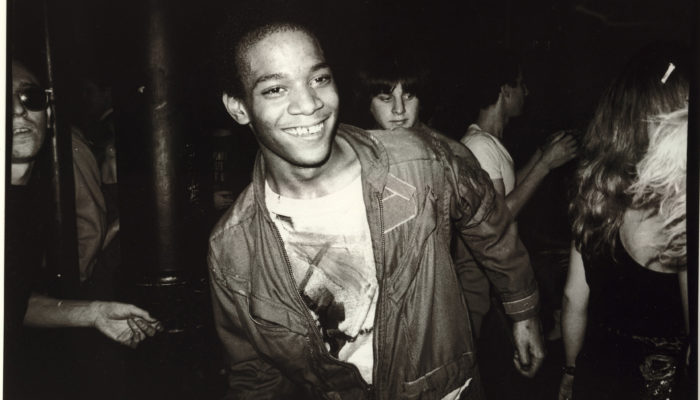 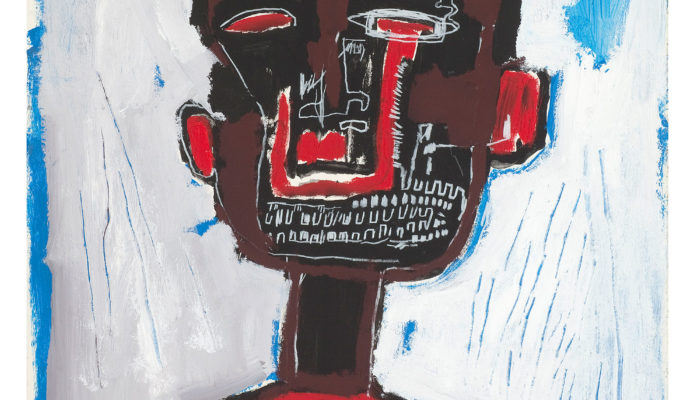 Find out more info about how to attend Basquiat: Boom for Real here.