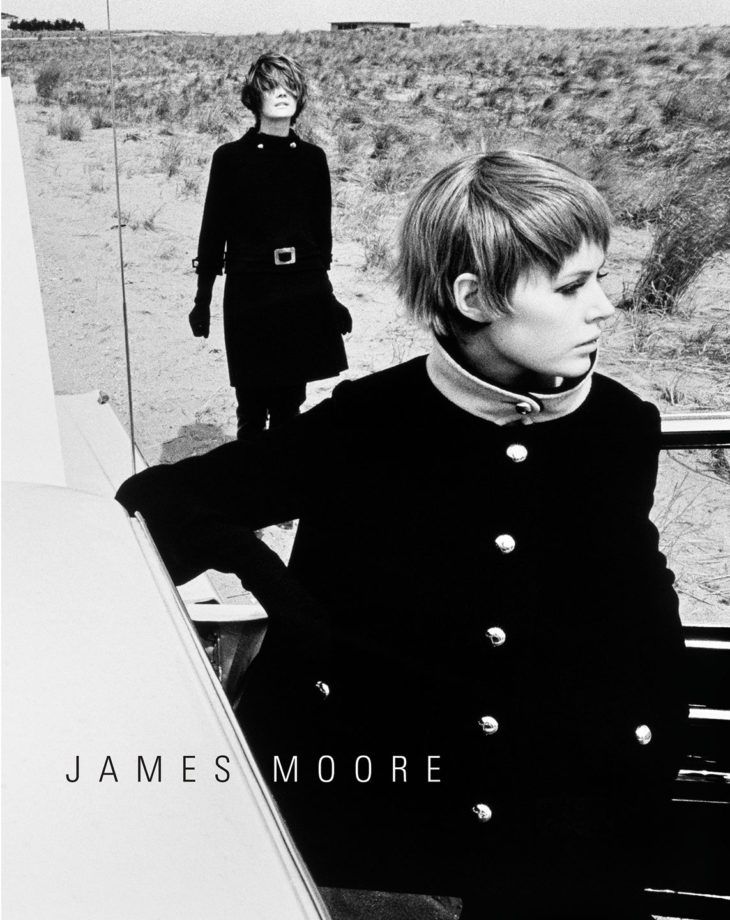 Spanning 50 years of photography by this quietly influential mid-20th-century fashion photographer Retrospective, Photographs 1962-2006 gathers James Moore's work into a single monograph for the first time. The book surveys his career, starting with Harper’s Bazaar in the 1960s, as well as his work for W, Vogue, Clairol, Cover Girl, and many other major publications and brands.

During James Moore’s two-decade tenure as one of Harper’s Bazaar’s “repertory company” of star photographers – alongside Richard Avedon, Saul Leiter, Hiro, Melvin Sokolsky, Lillian Bassman, Bill Brandt, Robert Frank, Duane Michals, Guy Bourdin, and Diane Arbus – he, and his contemporaries, were in large part responsible for a style that came to define an era and establish artistic guidelines still adhered to to this day.

By stepping away from the rigid formality of the 1950s, “Between the end of ‘Chatterly ban’/And the Beatles’ first LP” (as famously put by Philip Larkin), a newer, more sexually potent visual language was being born out on the pages of fashion magazines. Moore quickly recognised that, “to make a name I must reflect current trends and the sexual revolution”.

Born in Brooklyn in 1936, he was the youngest of four children to first-generation American parents, themselves the children of Chinese immigrants. Despite the frugality of his Depression-era childhood, and the tragedy of his mother’s death that saw him raised by an aunt, at the age of 11 a family friend gave young Jimmy a camera that would encourage his lifelong fascination with the image.

It was not long before opening his own studio in 1960 that Moore’s career would fundamentally change. He attended classes by Alexey Brodovitch, Harper’s legendary art director of 1934-1958, with the aim of becoming a fashion photographer but not before using still life, working for ad agencies, as a way of honing and perfecting a technique that would stand him in good stead, both formally and stylistically, when he made the move to the fashion world.

“Every job has its own peculiar problems, so it’s like going back to school: lighting with shiny surfaces, taking dark photographs, positioning objects. . .”

“…Still life helped me become aware of foreground, background, and every corner, every quadrant of the image so that gradually I felt at ease with arranging the shapes…”

After briefly assisting Richard Avedon, an introduction to Marvin Isreal, Brodovitch’s successor at Harper’s, would lead to the most artistically fecund time in Moore’s life – a six year period he would understandably find it hard to replicate, artistically if not commercially, later in life, despite working until his death in 2006. Most of the best images in this well-deserved collected works come from that period and show a languid sensuality that seems to at once be adroit of its time while gracefully nodding to certain formalities of the past and the elevated glamour of the future.

Moore’s name may not be as recognisable to some as many of his contemporaries but his style exerted a quiet influence that is seemingly in keeping with the easy charm of the man himself. Photographs 1962-2006 represents a contribution to a visual language that we still recognise and rightly celebrate to this day.

James Moore, Photographs 1962-2006 is published by Damiani and is available to purchase now.