A well-known focal point in creative director Alessandro Michele’s electrifying vision for Gucci has been the ceaseless dialogue between conflicting epochs.  Two months after the Maison announced it would be staging the Resort 2020 show in the city of Rome, the label revealed an invitation to sit and relish the collection live streamed from the Capitoline Museums.  Opting for settings as varied as The Promenade Des Alyscamps in Arles and The Cloisters of Westminster Abbey to The Palatine Gallery at Pitti Palace, Michele has become notable for his exceptional ability to infuse each and every Gucci show with a sublime yet terrific momentum to quench his audience’s fashion thirst.  As such, there was little doubt that his latest show exploring the magnificence of ancient Roman culture would live up to the high expectations. 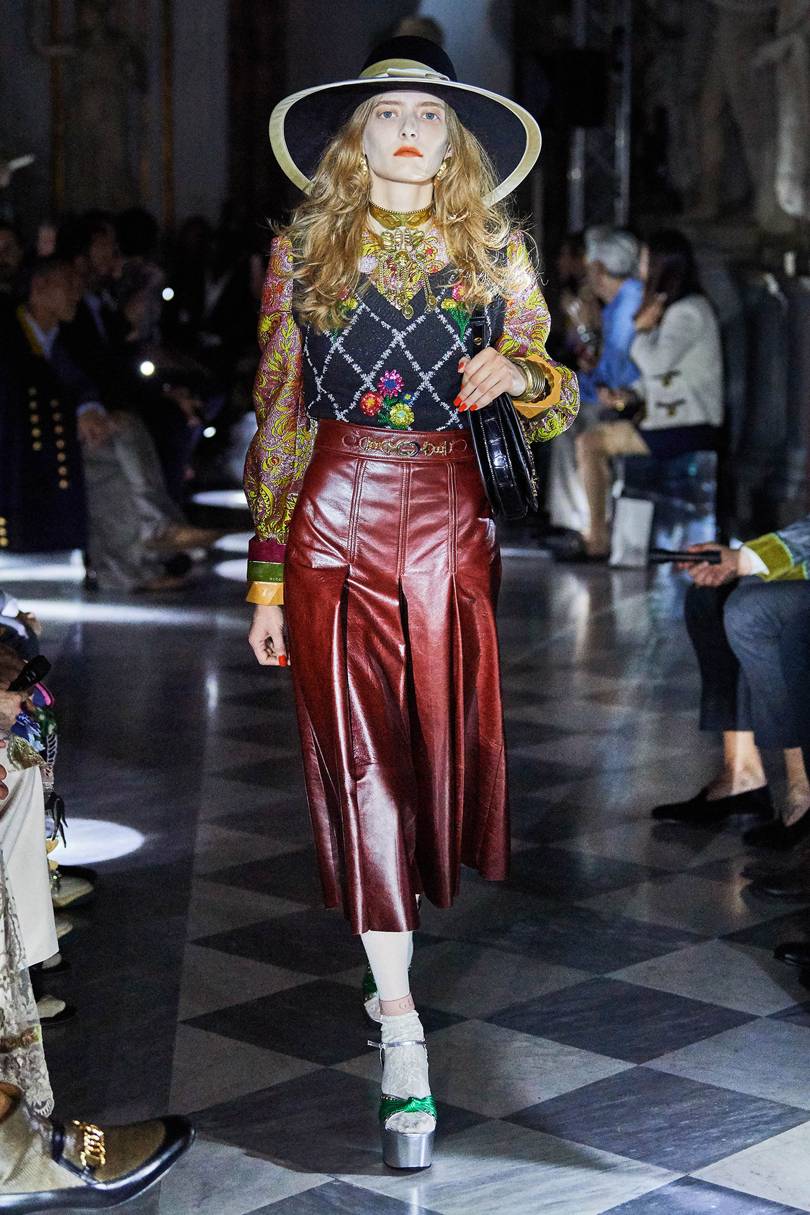 According to the Maison, Michele chose the venue principally for the historic magnetism that evoked his memories of a fundamental part of his early infancy.  Enriched by classic works, an opulent collection of antiquities and some of Rome’s most imperative relics, the Museums, located on the Capitoline vicinities, truly benefited from a collection filled with sartorial overstatement and an extraordinary legacy. 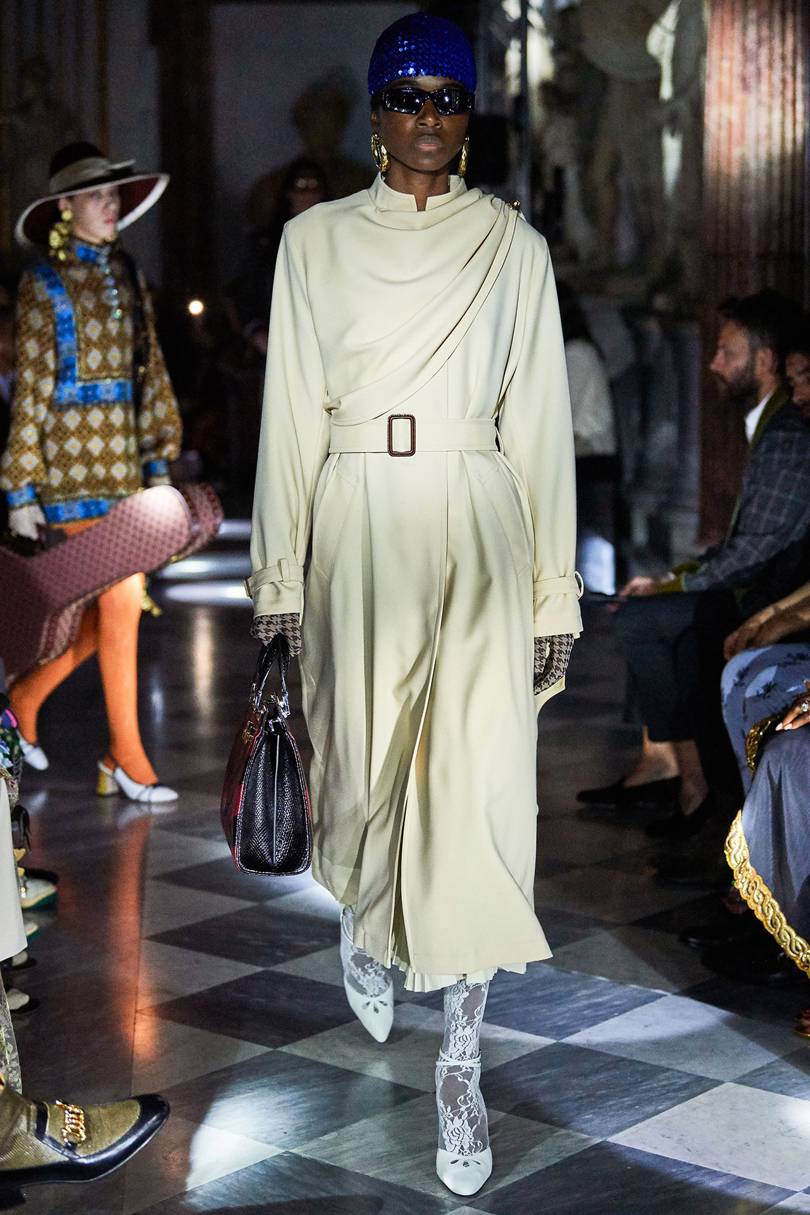 The mood kicked off with a rattling sound, alluding to a ‘divination’ ritual.  The atmosphere was dynamic and added to by an almost impalpable feeling of alertness in the gloom.  Fervour gave way to fear, fear to anguish and anguish to drama.  The catwalk felt overrun by thundering phantoms.  Gucci rarely dials back on the empowering creativity customarily portrayed by the Maison, and Michele continued this tradition of experimenting with parodies of various genres.  The ensembles shown encompassed an ever so eccentric yet timeless sense of fine tailoring.  From Roman tunics and togas to cartoon-like motifs conquering knitwear, the designer’s imagination reached to a boundless creative burst.  Raising aggressive and protective ideas to couture level; sharp, dagger-styled neon details flashed menacingly on the clothes, bags and headpieces.  Bold jewellery pieces in the shape of blades were matched with earrings forming (non) lethal ‘style weapons’ that were complemented by a brave tonal palette. 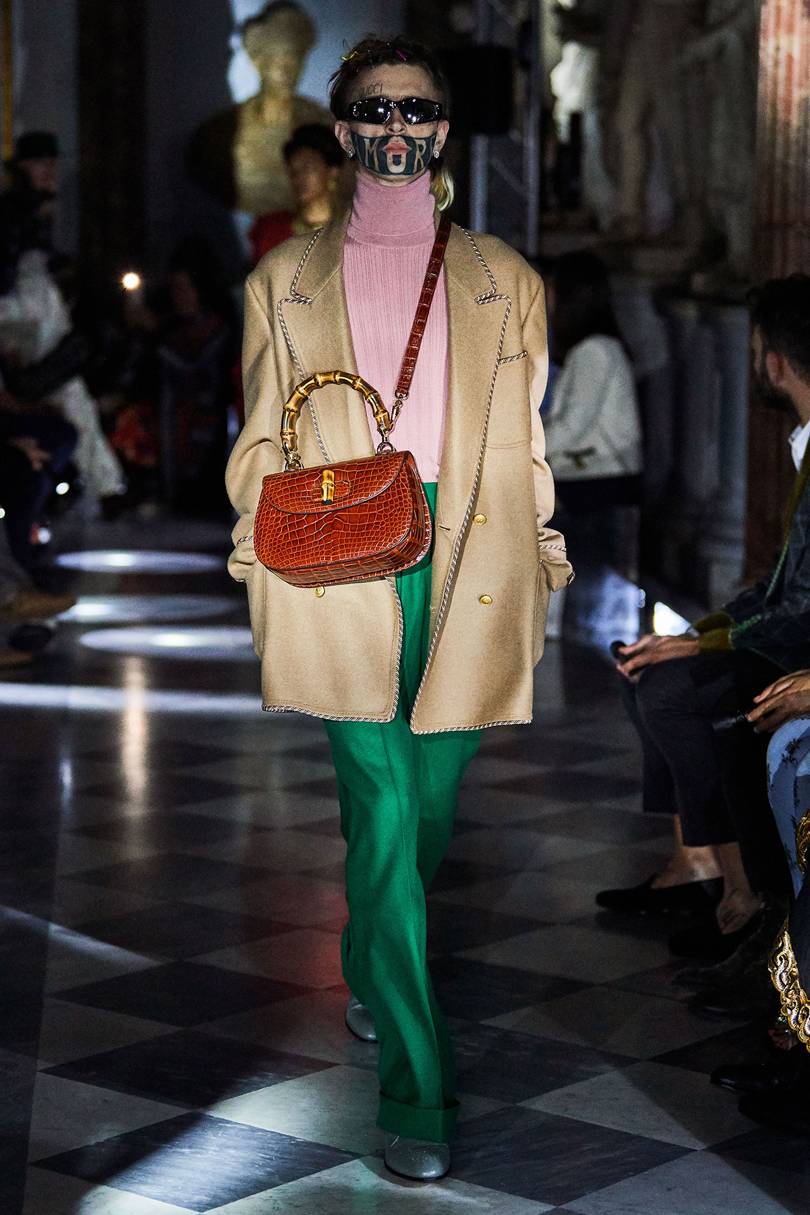 The tonal contrasts were focally nailed within the softer silhouettes.  In some cases it evolved into more casual attires, accentuating a ready-to-wear feel on the catwalk.  The pieces themselves were classic, innovative and dandy.  They were empowered with stand-out logos and pops of beaming hues, completing a distinctive reformulation of Italian savoir-faire in a uniquely Gucci way.  Moreover, with a history of consistently subverting themes like dissection and intersection, construction and deconstruction and traditional and modernist, the collection highlighted newer themes of culture, religion and society.  It graced us with an eclectic, chic and utterly superb range of clothes to gratify our enduring style lust.  The ruffles which were present in some of the gowns beautifully blended with the sparkles and shimmery details.  Overall, it was an extravagant portrayal of luxury fashion crafted in a way that only Gucci is able to do. 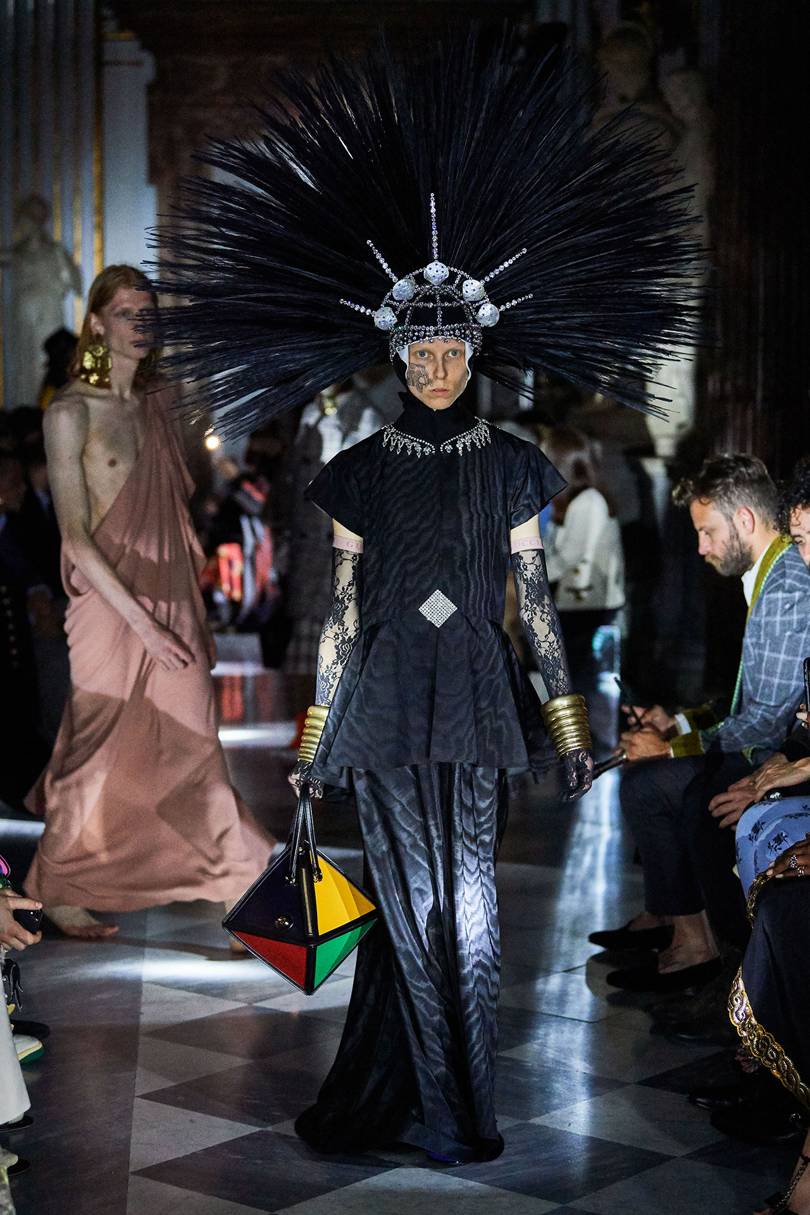