The newly released Gucci Aria campaign is equal parts delicious and Machiavellian.  A whistle-stop tour of taboos, kinks and sexual pride, Alessandro Michele’s creative direction fixates on Eros, the mischievous Greek God of passion and love. Eros “exists because certain boundaries do,” states classicist and poet Anne Carson. “In the interval between reach and grasp, between glance and counter-glance, between ‘I love you’ and ‘I love you too,’ the absent presence of desire comes alive.”  As Gucci engages in an ontological exploration of desire beginning with Plato and ending with Sexistence, it is apt that the campaign takes place in society’s most frequented and charged liminal space: the hotel. 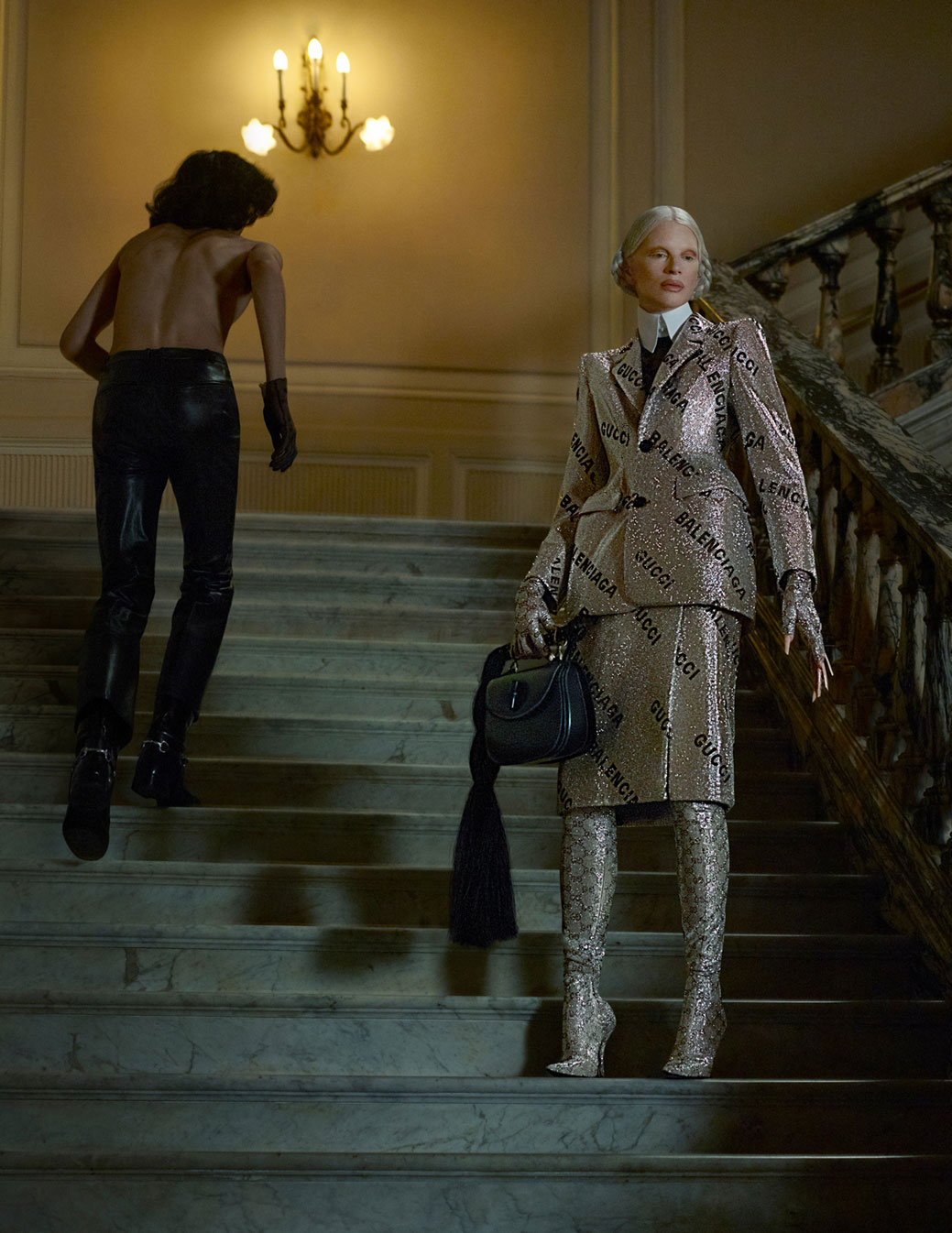 The hotel is central to the annals of Gucci. It was in The Savoy that Guccio Gucci worked as a lift boy in his youth, drawing early inspiration from the sophisticated and cosmopolitan guests he observed.  For the house’s centenary celebrations, the concept of the hotel has proved a lasting inspiration.  First, the Savoy was transformed into a fictitious club for the backdrop of the Gucci Aria digital fashion show.  Now, Guccio Gucci’s lift boy gaze permeates the Aria campaign in a series of scenes concerned with the sensations of seeing and being seen. 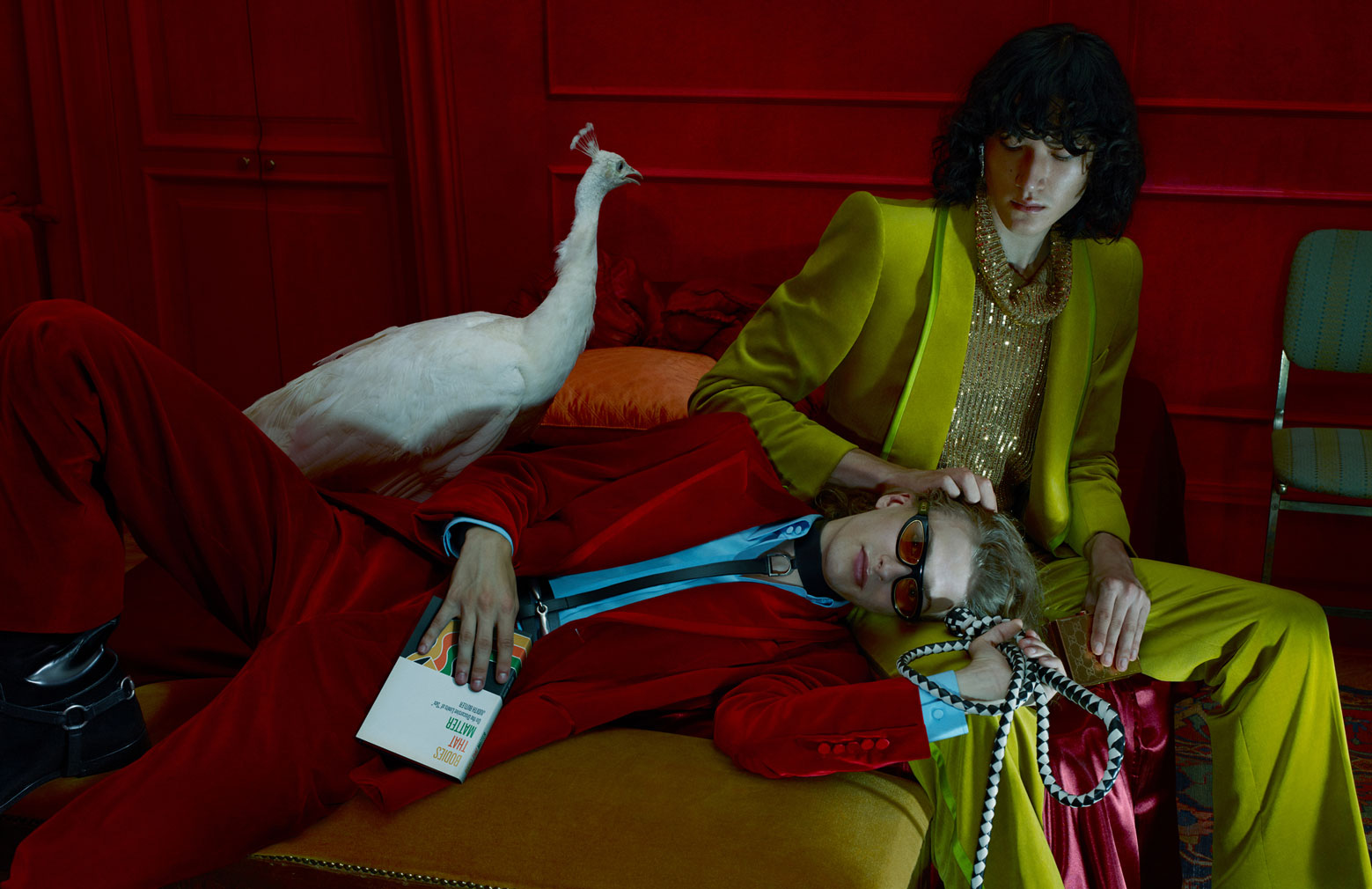 A naturally secretive and seductive space, the campaign plays with the permeable seclusion of the hotel room.  Epicene idol Kristen McMenamy emerges from a car outside and, before entering, stares into the unending hotel windows until a single light turns on.  Possibilities are illuminated.  Sexual voyeurism is experienced both by viewers and the models alike via hidden grating, cameras, and the omnipresent peephole.  McMenamy strides through the hotel’s lobby and corridors sporting a sequinned skirt suit from the ‘Hacker Project’ emblazoned with Gucci and Balenciaga branding. 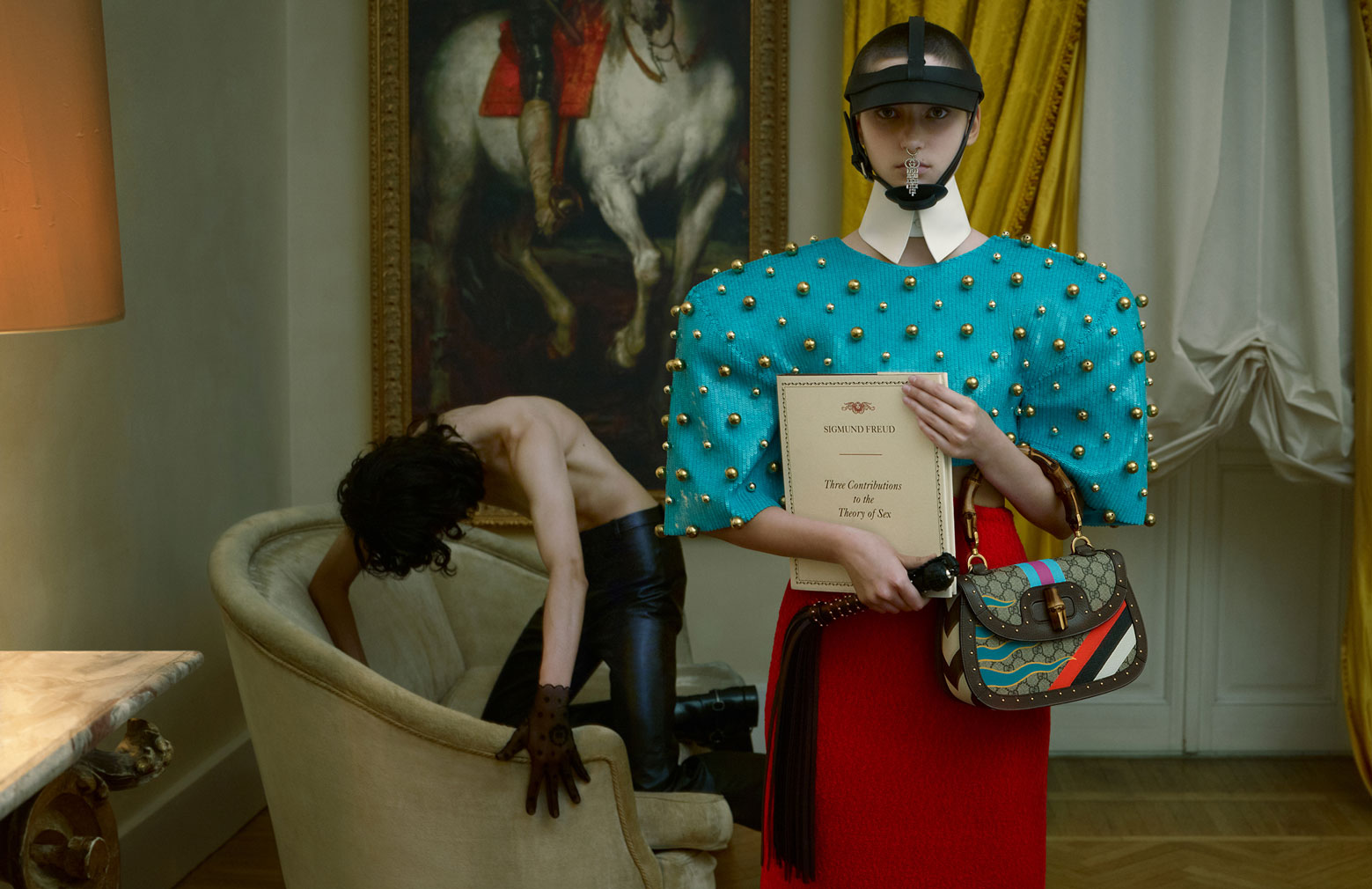 Each figure featured in the hotel’s communal areas is shot in isolation.  Yet upon entering their rooms, guests reappear united in Bacchanalian poses of ‘erotic power.’  The camera soars over the enmeshed bodies of Italian glam rock band Måneskin.  Amidst an embrace, a whip is grasped at the base of a lover’s spine.  Transience blends with indulgent moments of lust and love, as we pace through scenes of imminent passion that emphasises the respectability of the civic spaces while contrasting it with the primal vibrations of the private spaces.  The campaign asserts that mere ‘existence is corporeal exhibition.’  The clothes we choose to wear glorify our exhibiting essence. 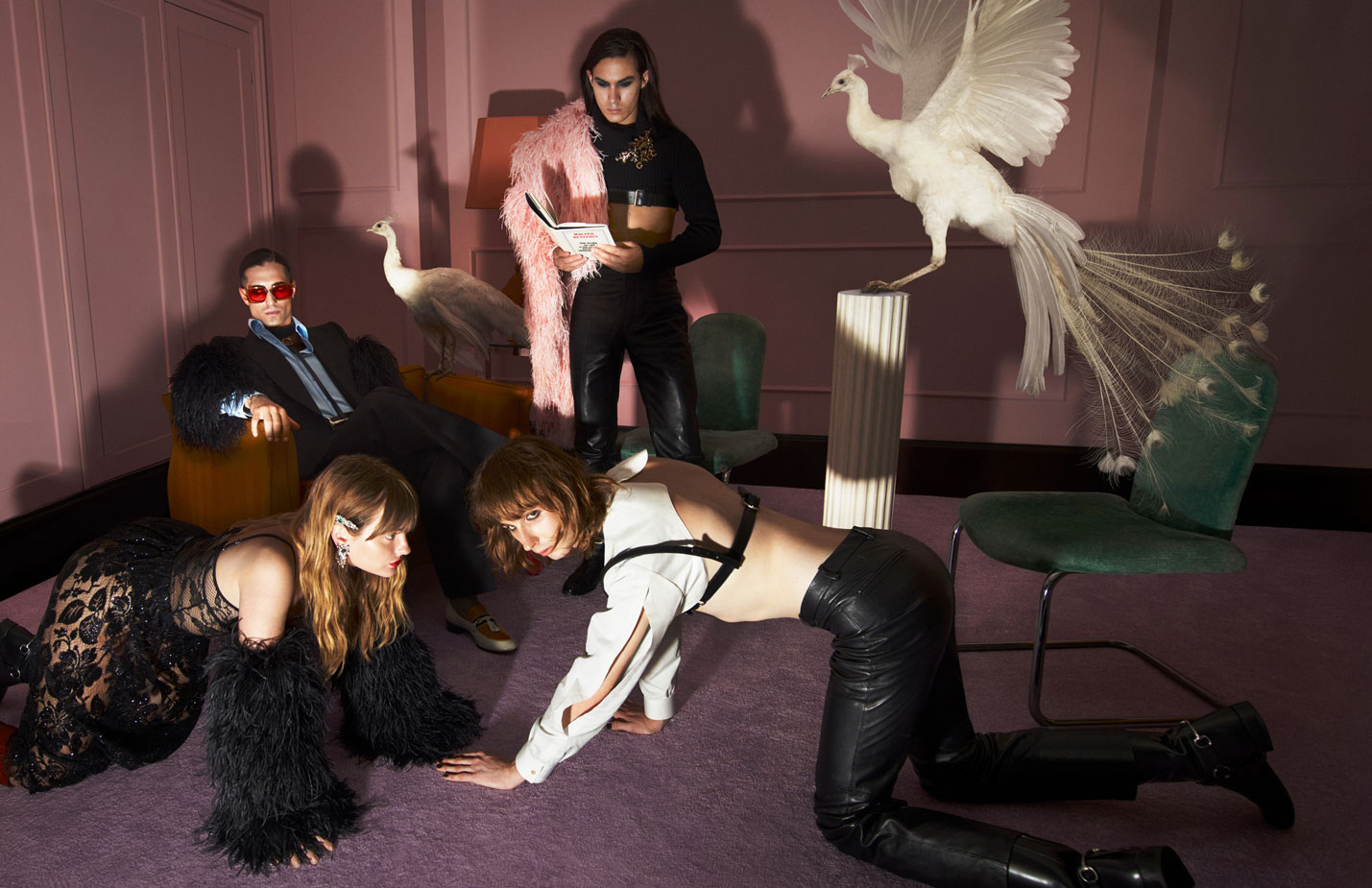 The Gucci Aria campaign was shot by collaborative fashion photographers Mert and Marcus. Known for their domineering portrayals of enigmatic women, the duo has photographed pop and fashion royalty including the campaign’s soundtrack artist – Madonna.  Her cover of Marvin Gaye’s I Want You pulses through the shoot via the distinctive production of English trip-hop electronica band Massive Attack. 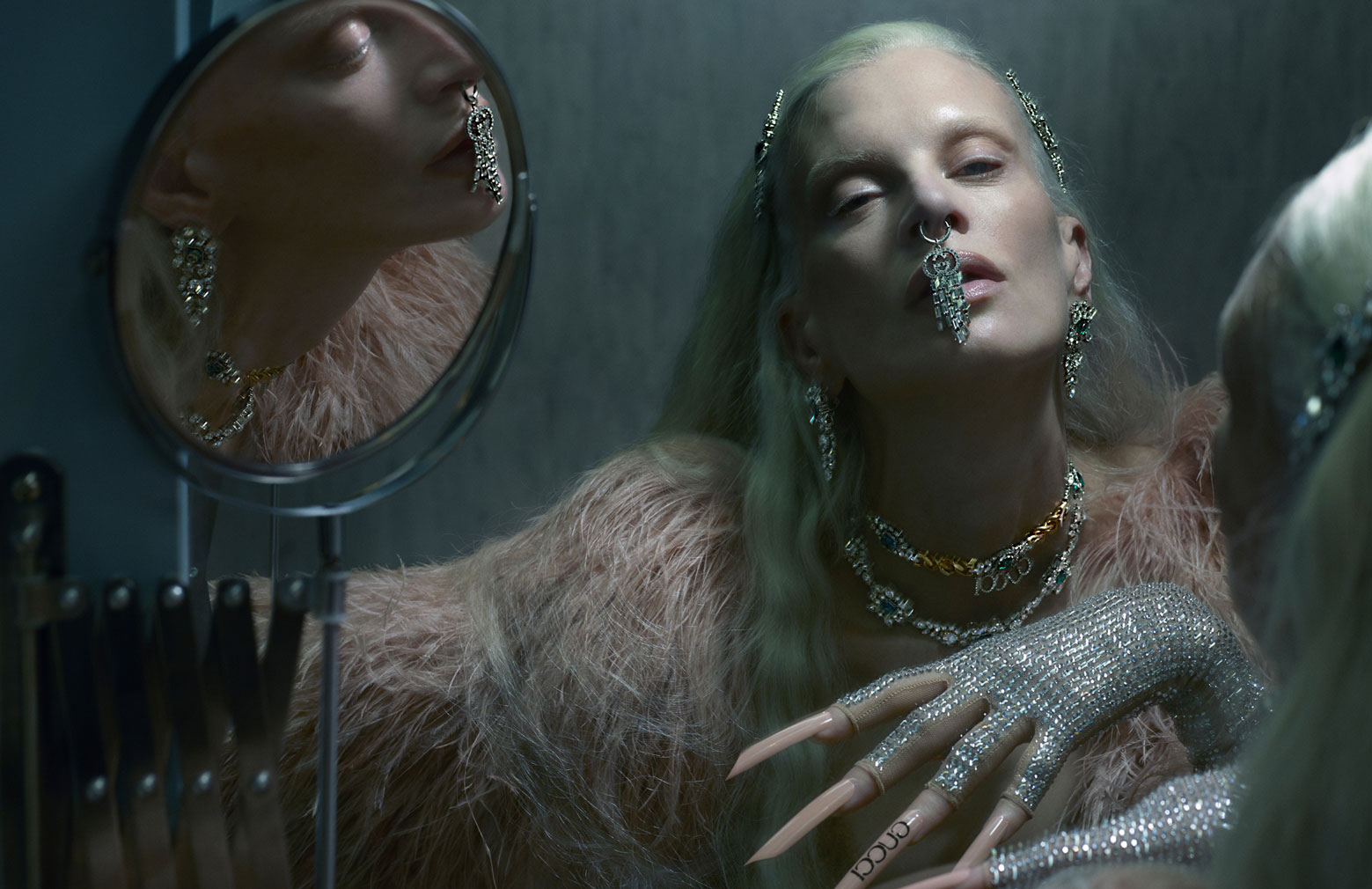 In a campaign focused on exploring the ontology of desire, Alessandro Michele’s Gucci seduces both the mind and the body with the sly, bittersweet and uncontrollable version of a contemporary Eros.

Photographers and Directors: Mert and Marcus

To read our last feature on Gucci, click here