Atlanta-born design innovators (b).STROY recently teamed up with heritage House Givenchy for an unapologetically loud capsule collection for Spring 2023.  Focusing on the idea of essential streetwear for both men and women, there’s a sense of the unisex in graphic tees and athleisure jumpers, alongside specifically masculine and feminine lines in varsity jackets and hoodies.  The collaboration drops just as the urban fashion wave continues to dominate. 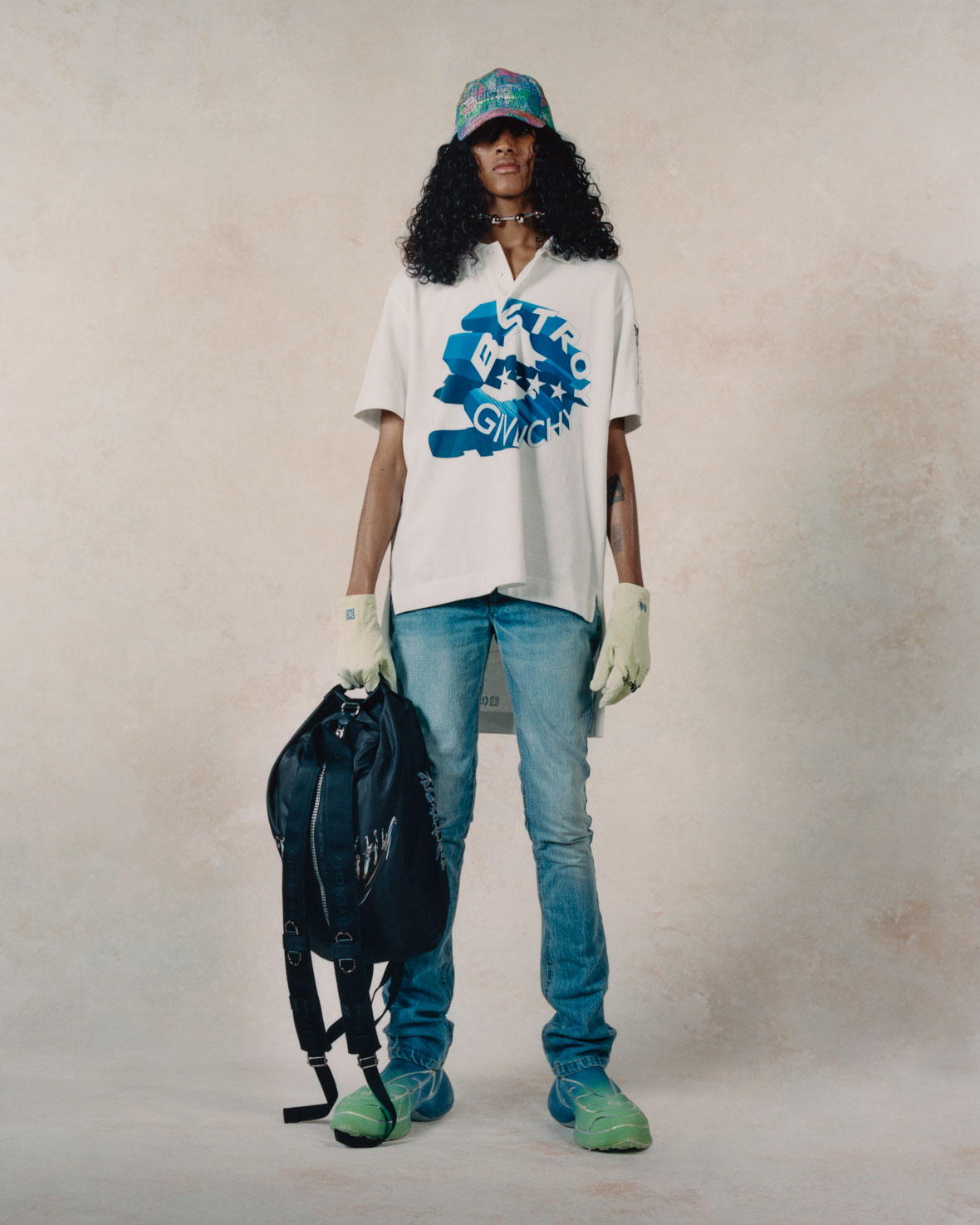 Having moved from underground outsiders to luxury label mainstays in the past half-decade, Givenchy’s newest offering wades into the over-saturated streetwear landscape with true innovation alongside a genuine artistic instinct.  Creative director Matthew M. Williams builds on his existing relationship with (b).STROY’s Brick Owens and Dieter Grams – Grams at 1017 ALYX 9SM before he founded independent label (b).STROY with Brick Owens in 2012 – for a merging of their respective post-streetwear sensibilities 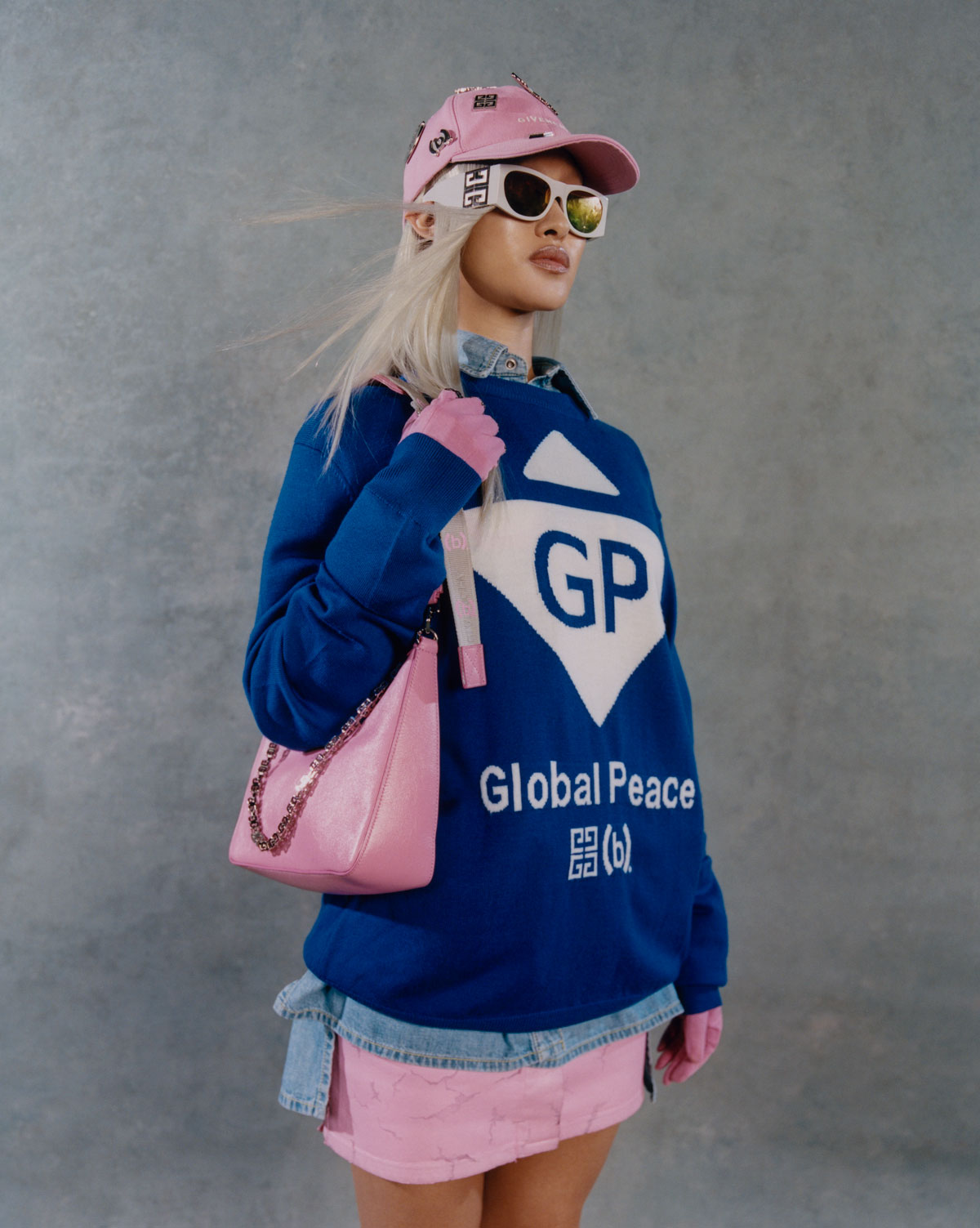 Owens and Grams’ work has courted acclaim and controversy in equal measure in the past. While (b).STROY’s double-headed hoodie featured in the Met Museum’s American Fashion exhibition this year (now realised in a new ‘Gone Def’ graphic form), sweatshirts branded with ‘Sandy Hook’ and ‘Columbine’ hit the runway in 2019 riddled with bullet holes to highlight the lack of gun reform in the United States. 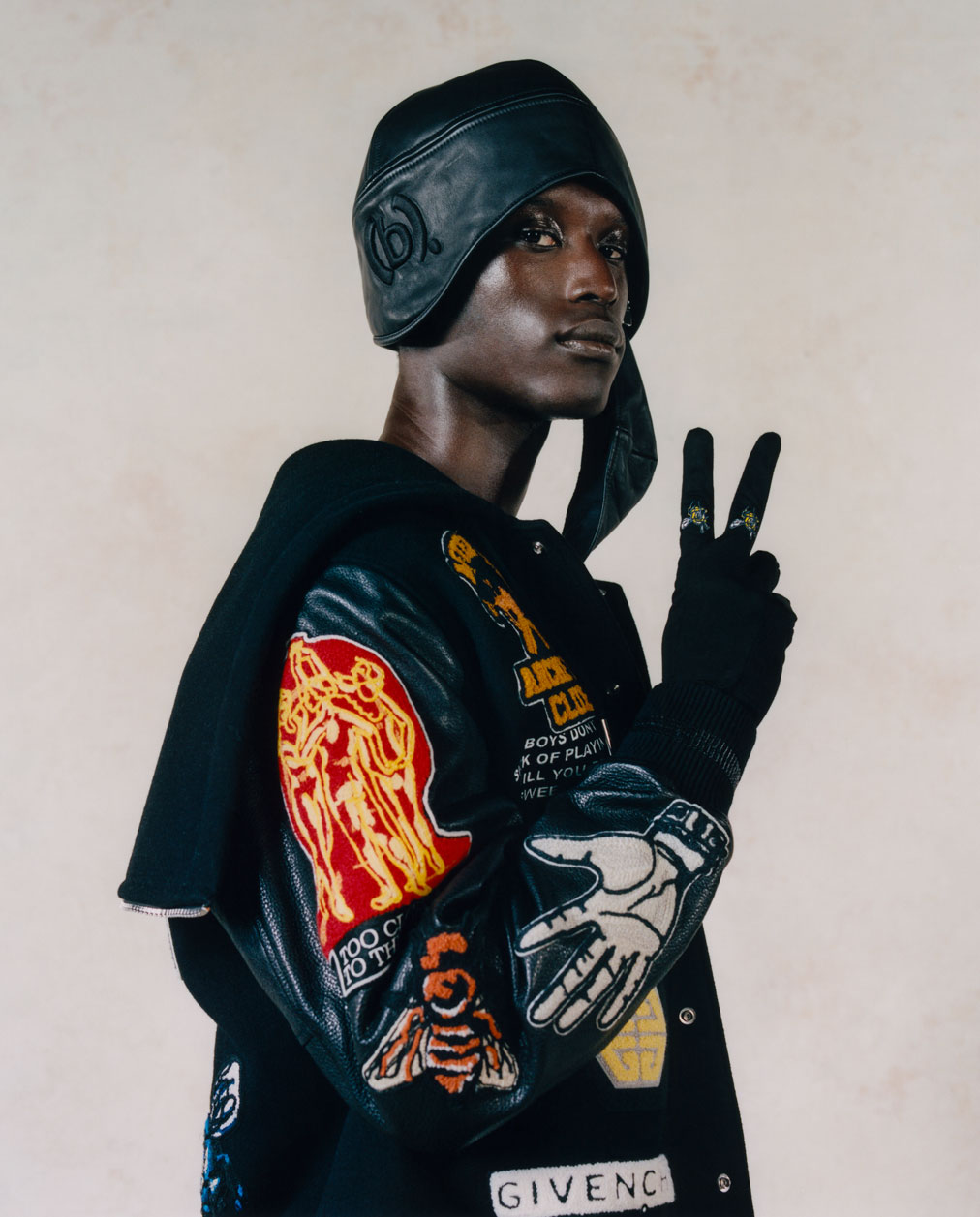 The deconstructive (b).STROY eye perfectly reinvigorates popular Givenchy forms in vivid and hectic palettes.  Avant-garde co-ords and oversized graphic tees are the looks of choice for both men and women, with overlaid patches and branding from each house featured throughout.  Givenchy’s renowned iconography has also been reconceptualised by Gram and Owens through varsity lettering above motto statements like “Life’s Hard” and a new G-Zip form of the emblem. 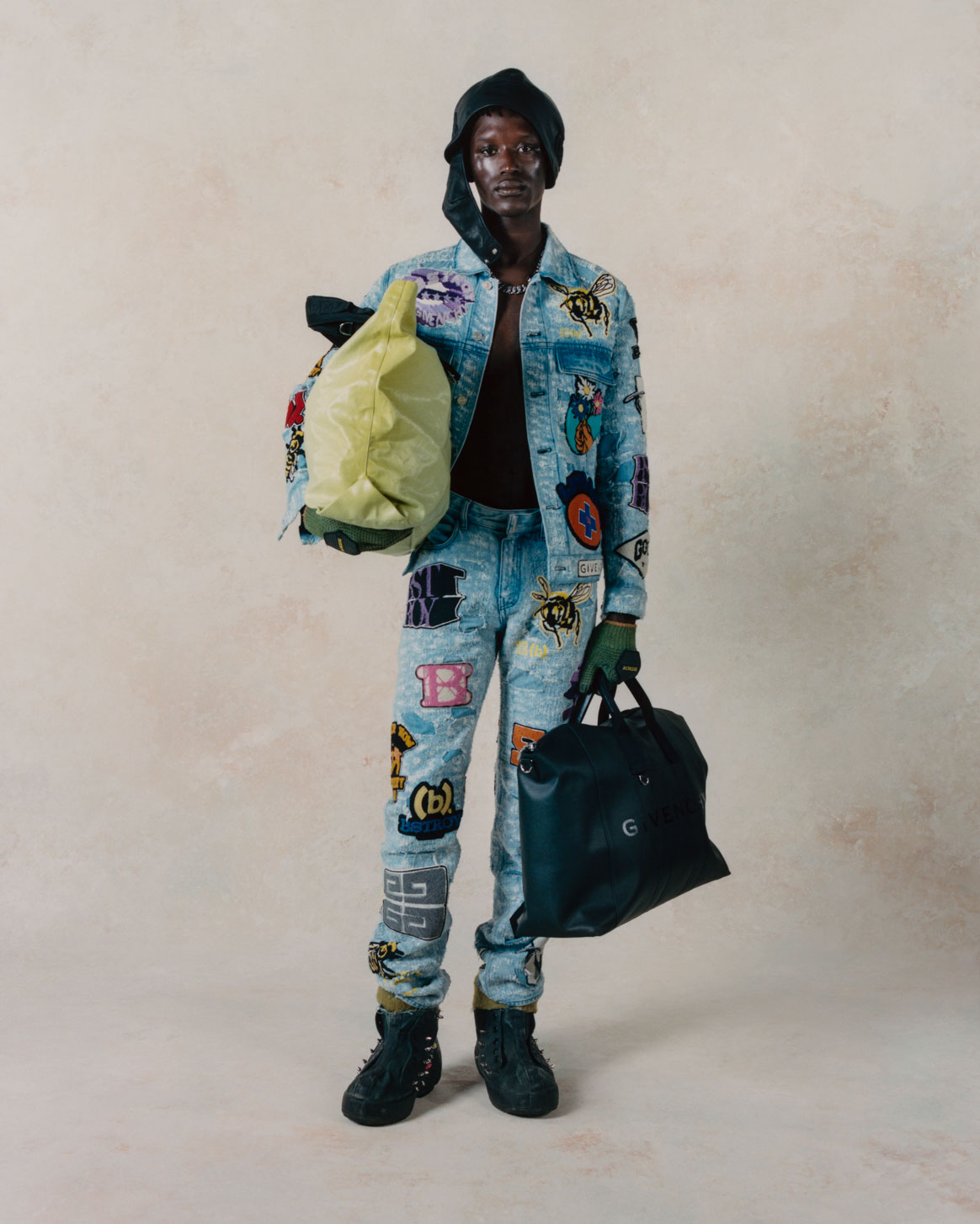 The standout look from the collection features a distressed double-denim jacket and trouser combination covered in vaporwave-esque (b).STROY and Givenchy patches.  Fans of the Givenchy Shark Lock boot will enjoy (b).STROY’s recasting in denim, with zips outlining the silhouettes heel and arch.  The sense of DIY denim is pervasive, recalling the tradition that once defined 90s and Y2K brands such as Lucky Joe’s and Von Dutch. 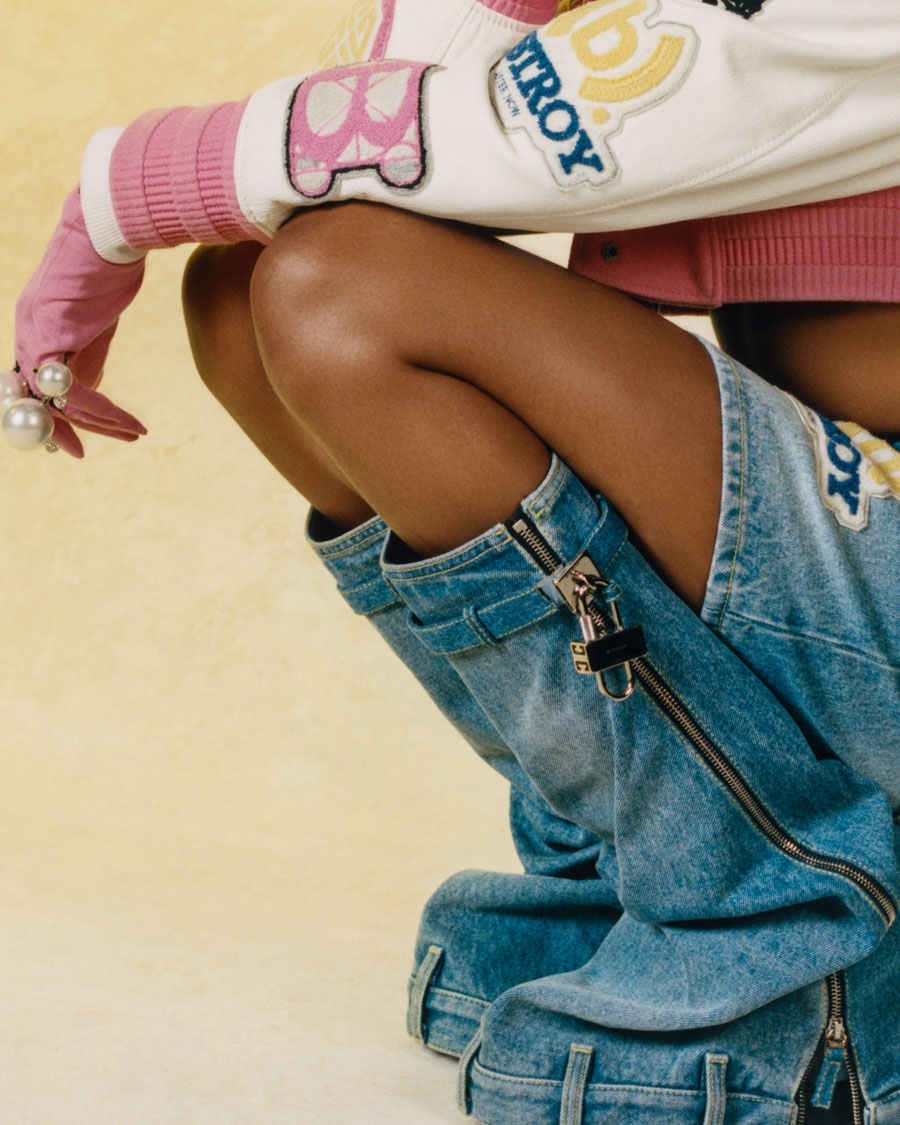 Givenchy x (b).STROY was a natural collaboration.  Owens and Grams’ vision of a neo-native near future is a natural extension of Williams’ avant-garde creative fashion sensibilities.  With a huge cult following anticipating their every move, this capsule of essentials may quickly develop into a progressive series.  It would be only natural.

Click here to read our last feature on Givenchy