Matthew M. Williams reshapes the rule book and the House codes for PFW

For Paris Fashion Week, creative director Matthew M. Williams presented his Givenchy menswear AW23 collection in a stark white environment that evoked prime laboratory conditions for his experimentations on traditional male style – but seen through the modernised prism of the House’s famous codes. 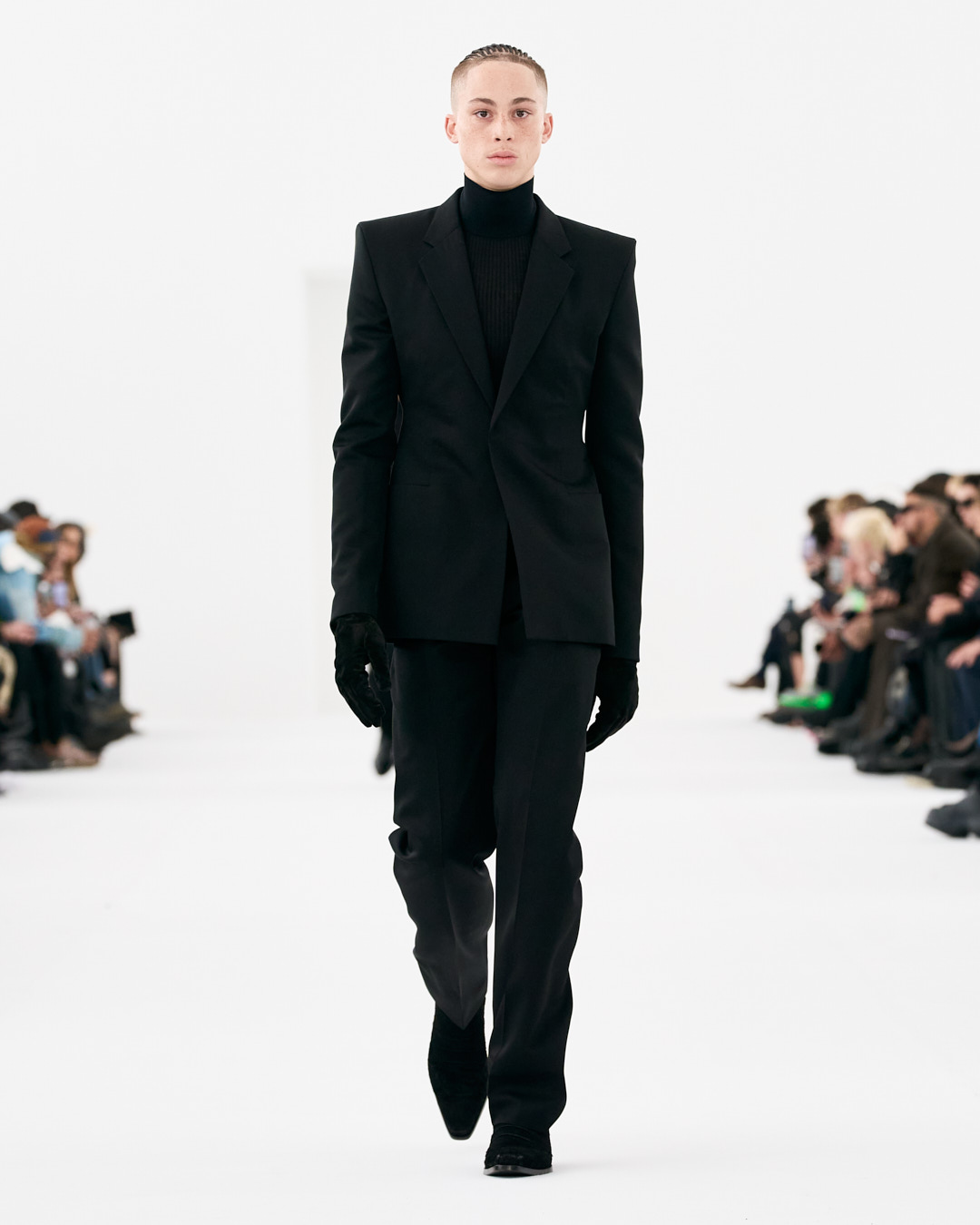 First under the microscope were the exquisitely tailored black suits fashioned with haute couture sensibilities in the House’s iconic atelier; each being mesmerising single-breasted, single-buttoned, sculpted waist versions of the other.  Then came the sudden gear shift into contemporary urban layering.  With satisfyingly relaxed knitwear and hoodies worn under big wool coats with equally big peak lapels, and the combination of workwear shorts in cotton or leather and heavy shin-high boots with chunky treads, a multitude of contrasting textures and materials soon began to wash over us. 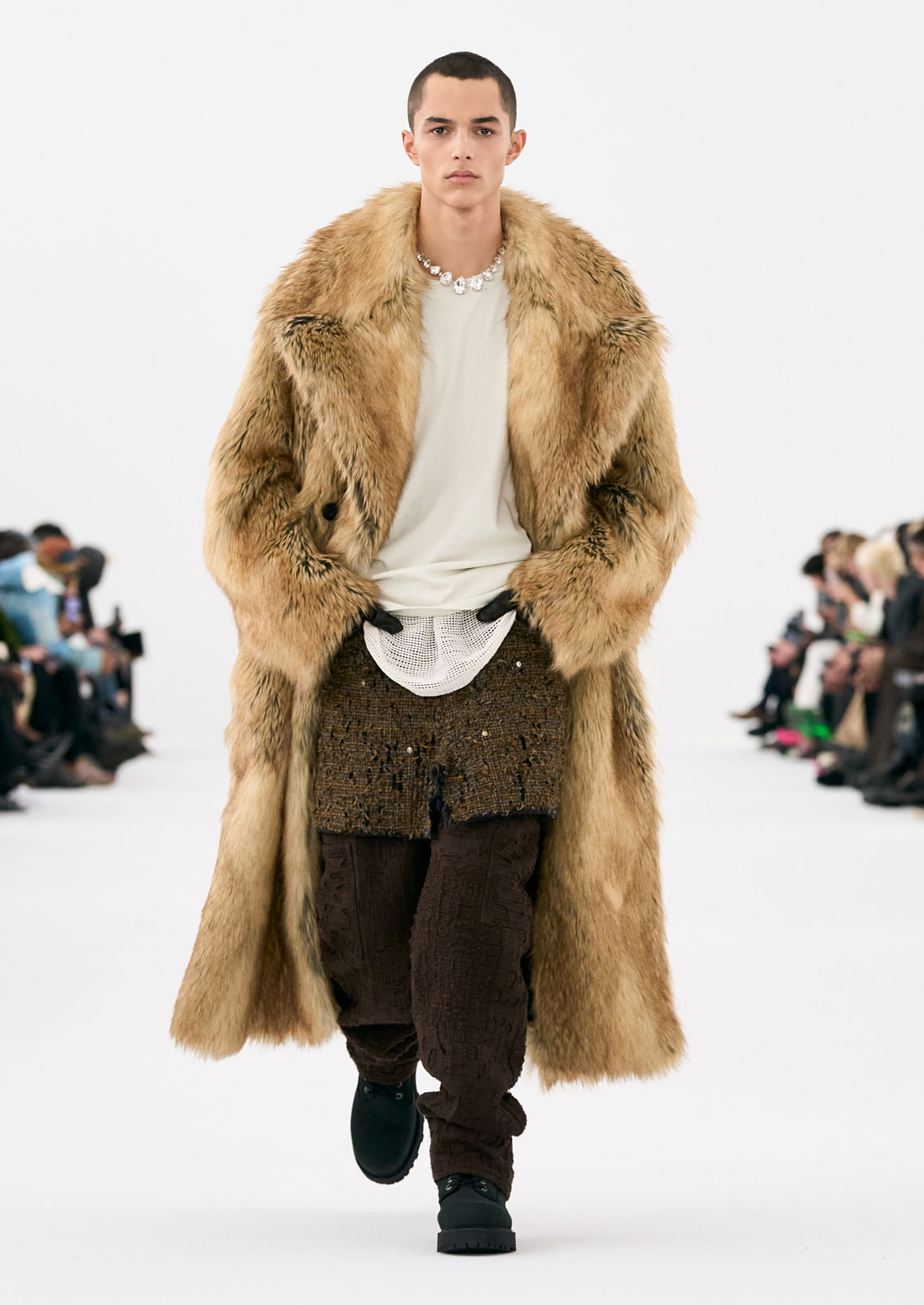 This turn into easier, wearable yet totally constructed silhouettes remained present throughout the rest of the collection.  From oversized shaggy faux fur coats in lion mane tones and deconstructed/restructured patchwork tartan trousers with zipped knees, to loose open weave zipped ‘feather’ jackets and waistcoats – there were no hiding places from Williams’ all-encompassing desire to make the familiar new and exciting again. 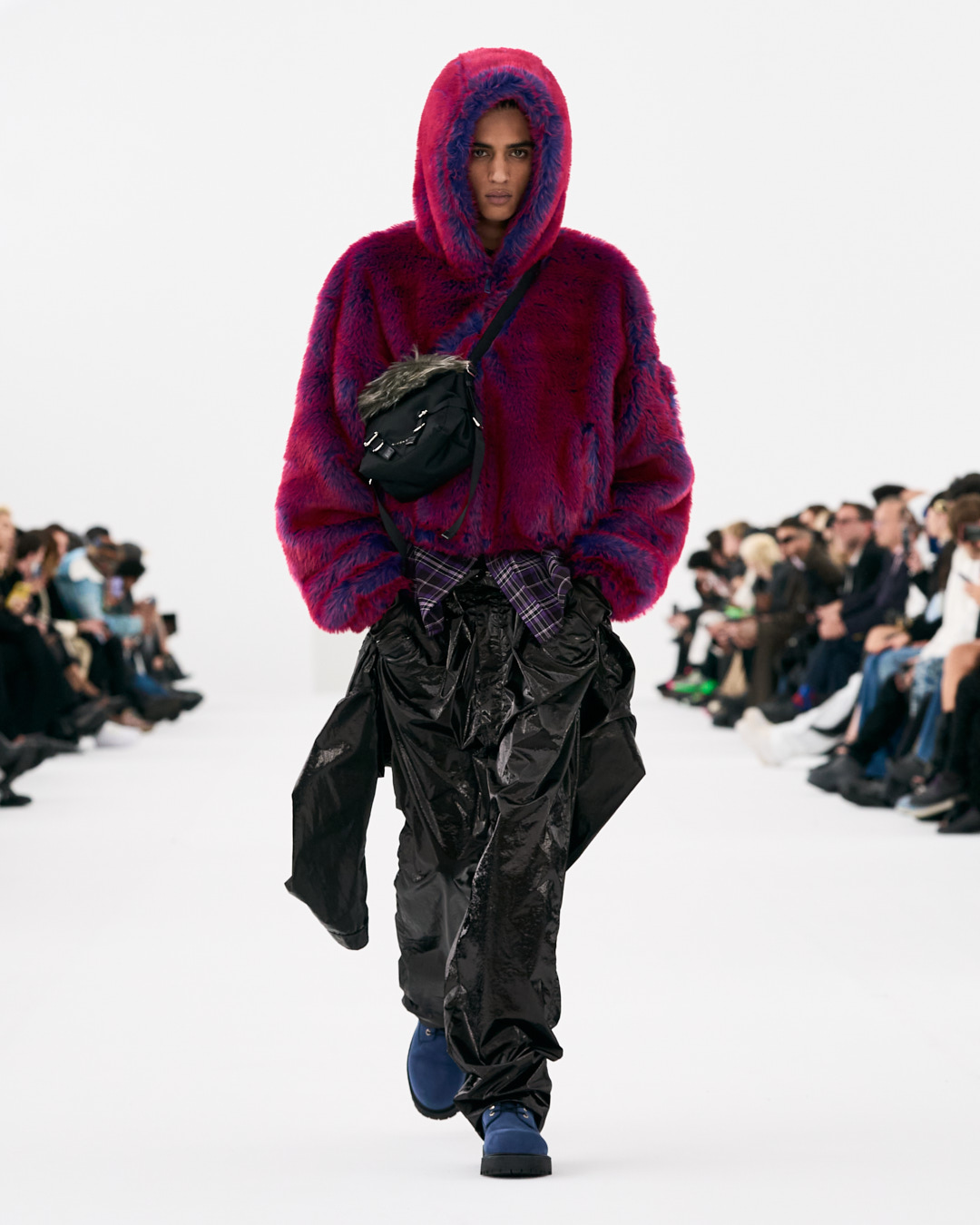 When the colours came, they announced themselves.  The lime green of the string hoodie offered contrasting counterpoints to grab a hold of when poking out from underneath the layers of black knitwear and faux fur, or when seen on trousers worn under frayed denim skirts.  The tonic effect of the mauve and purple teddy bear fur hoodie juxtaposed beautifully with the patent black boiler suit it was shown with (top half undone and worn hanging around the waist, of course). 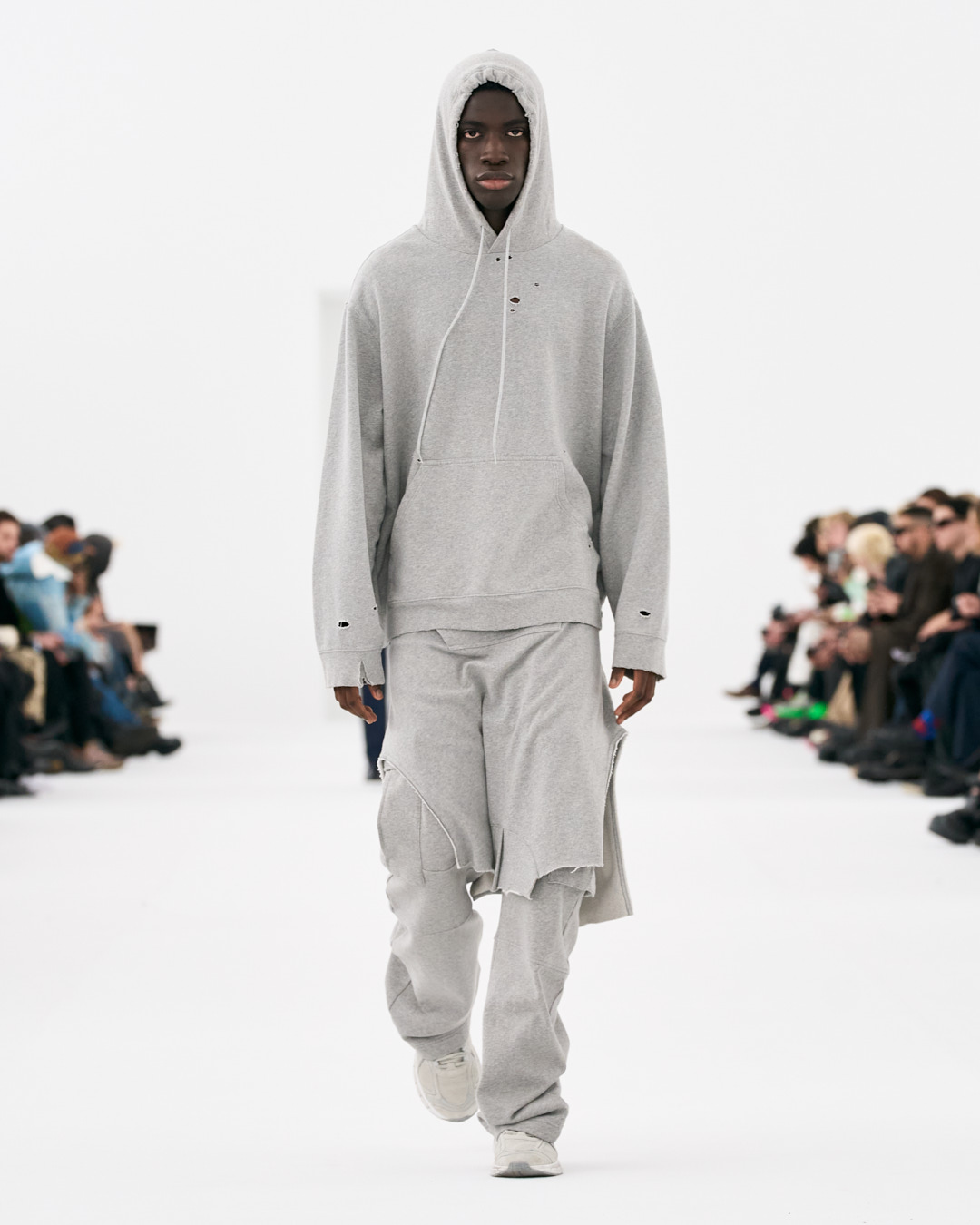 When colour was ‘absent’ it was left to the styling and the singular aesthetic to carry the moment.  A monotone grey sweatpants and hoodie twinset featured subtle panelling on the legs and an almost hybrid kilt around the waist – an interpretation of vintage images of Monsieur Givenchy himself casually wearing a jumper around his waist.  It was one of a number of fascinating conceits that Williams returned to time and again throughout his story.  It’s likely we’ll all be doing the same come winter. 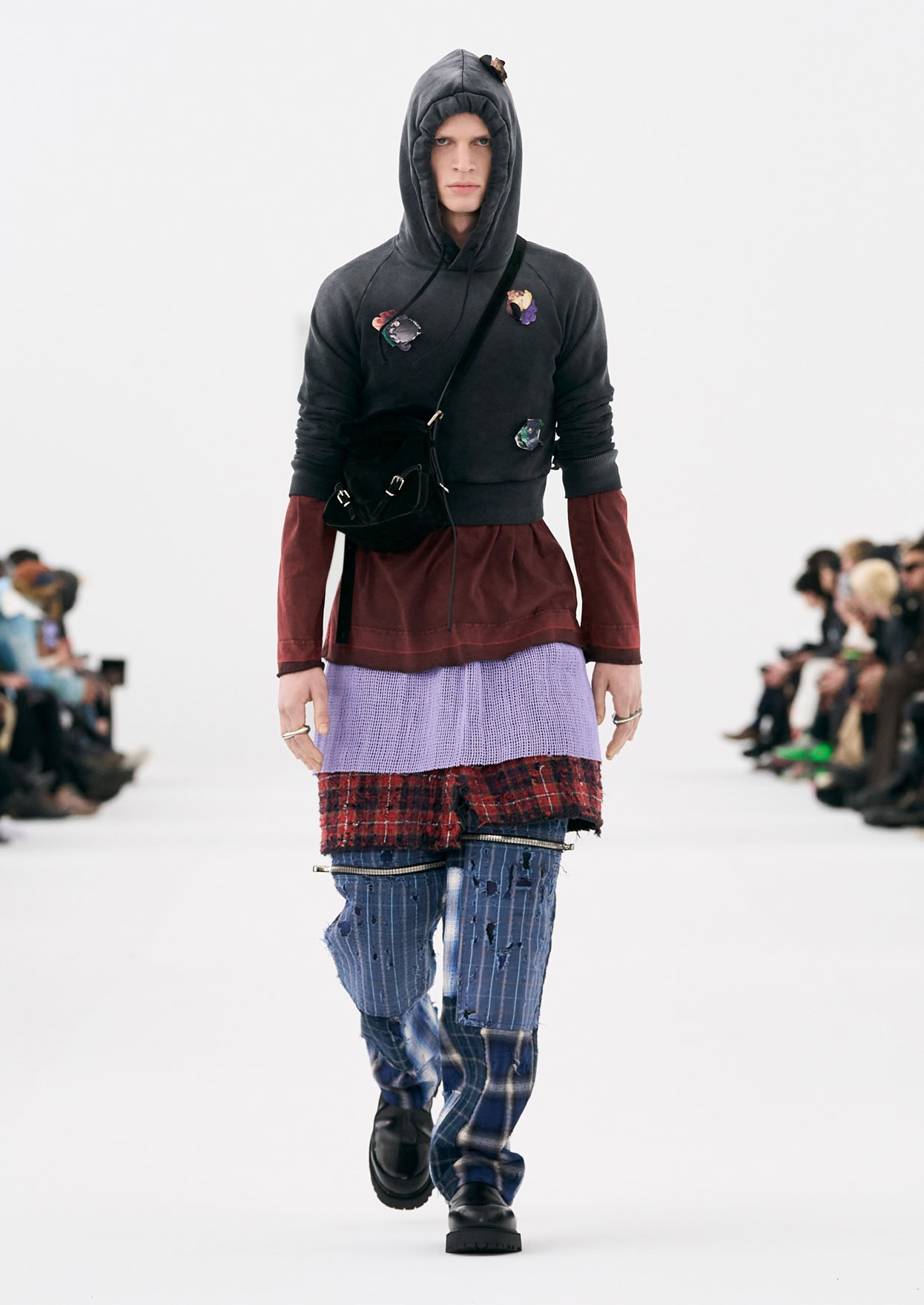