Milanese architecture was the foundational principle on which the new Giorgio Armani menswear AW23 collection at Milan Fashion Week was based.  At almost 90-years-young, Mr Armani was showing no signs at all of simply coasting to the finish line.  And the gravity that his home of Milan exerts on his boundless creativity was again evident for all to see for the coming winter. 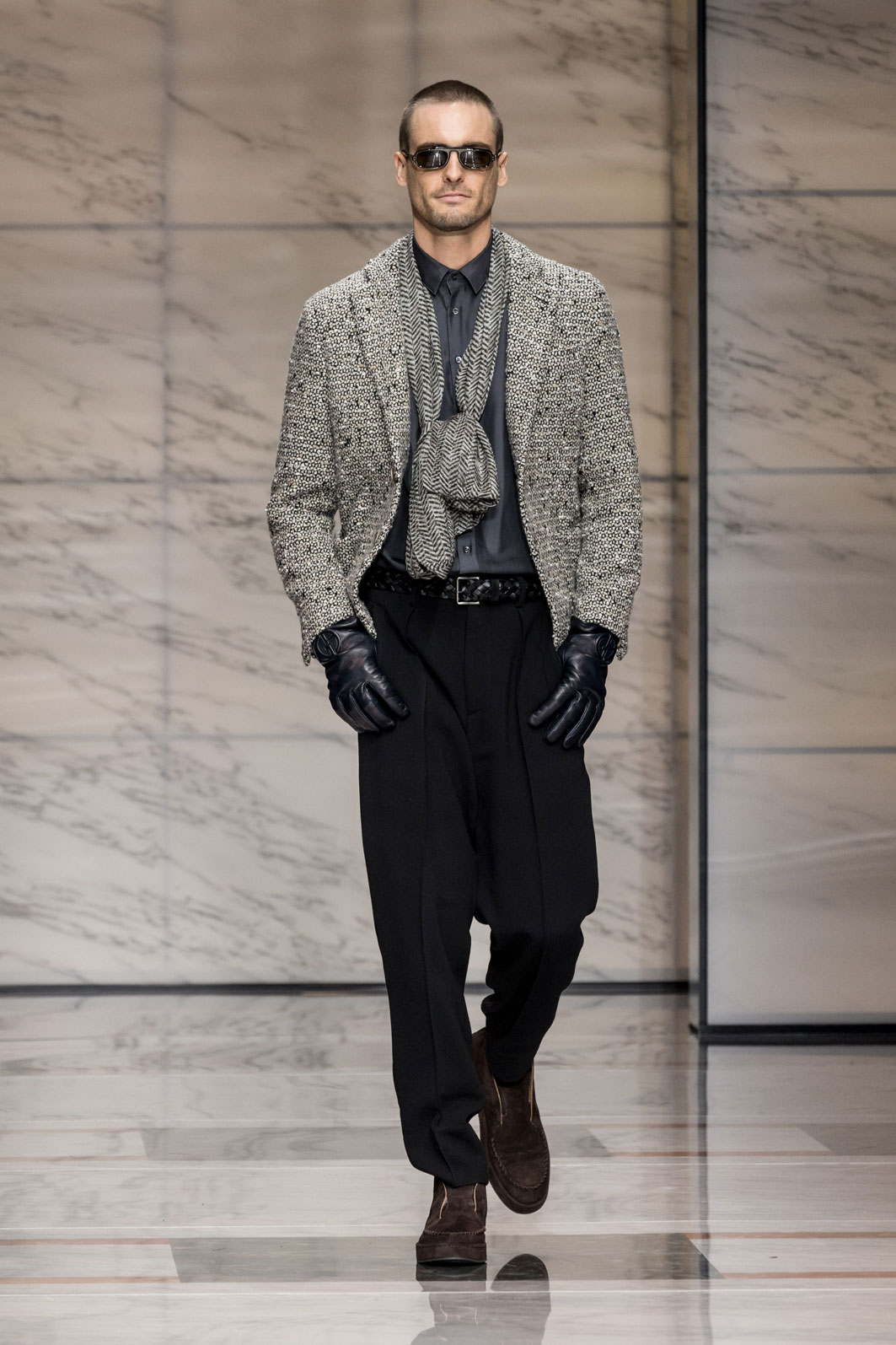 Specifically, it was the famous atriums found in the palazzos of the city that underwrote the story that unfolded on the catwalk.  The marbling often found underfoot was reinterpreted in the check patterns of the black and white single-breasted jackets, waistcoats and trousers – each with flecks of neutral colours to mimic light reflecting off the sheen of the original hard surfaces. 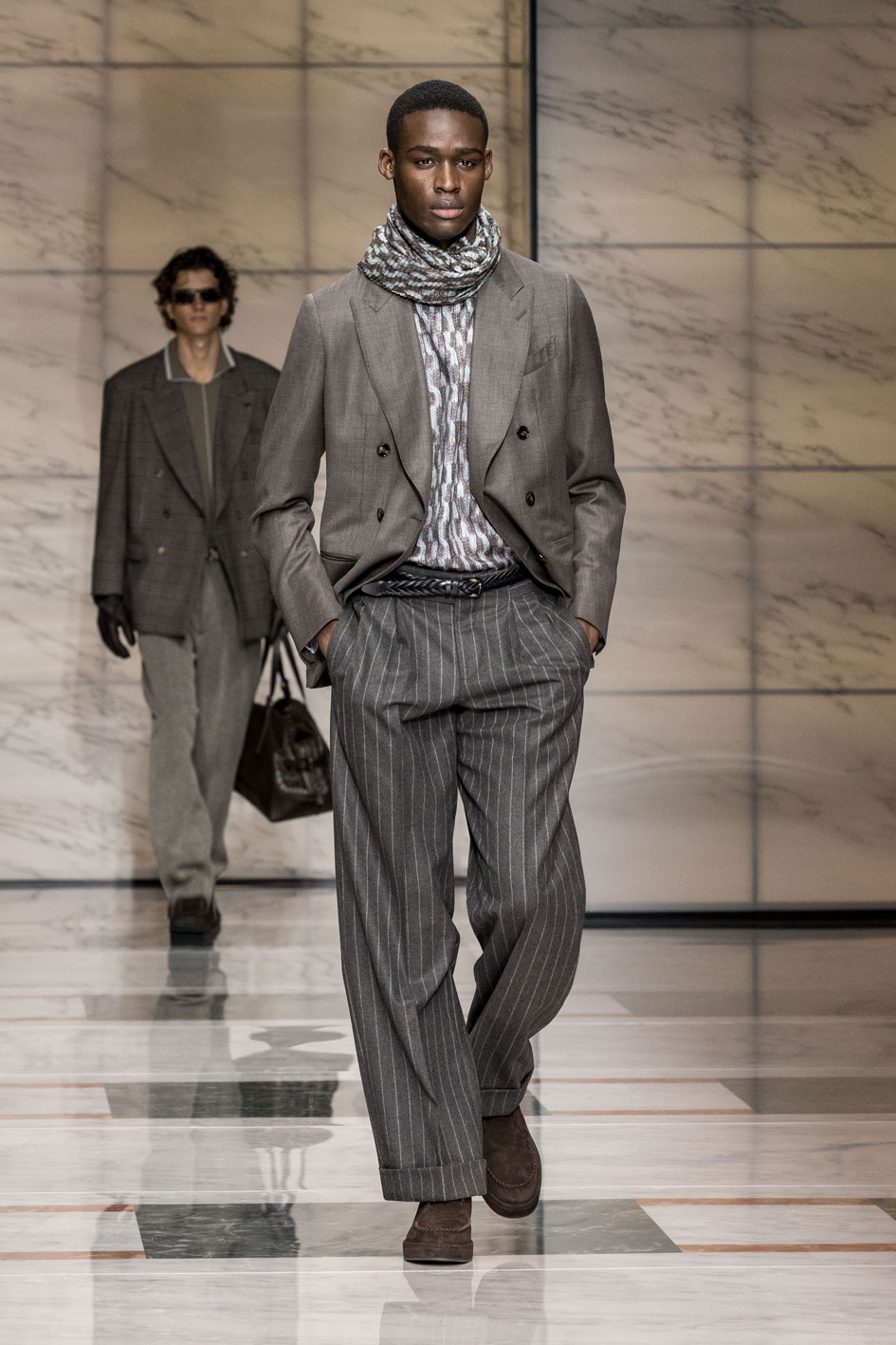 Checks were a prominent motif throughout the collection, sometimes bold herringbone or Prince of Wales varieties, sometimes it was a stark houndstooth or pinstripe.  The colours also mirrored the Milanese skyline, with contemporary silver greys and blacks broken up by browns and tans.  Naturally, the aesthetic was made to complement the setting, with Indiana Jones style fedoras topping off sumptuous shearling leather jackets and trousers tucked into shin-high boots with thick chunky treads. 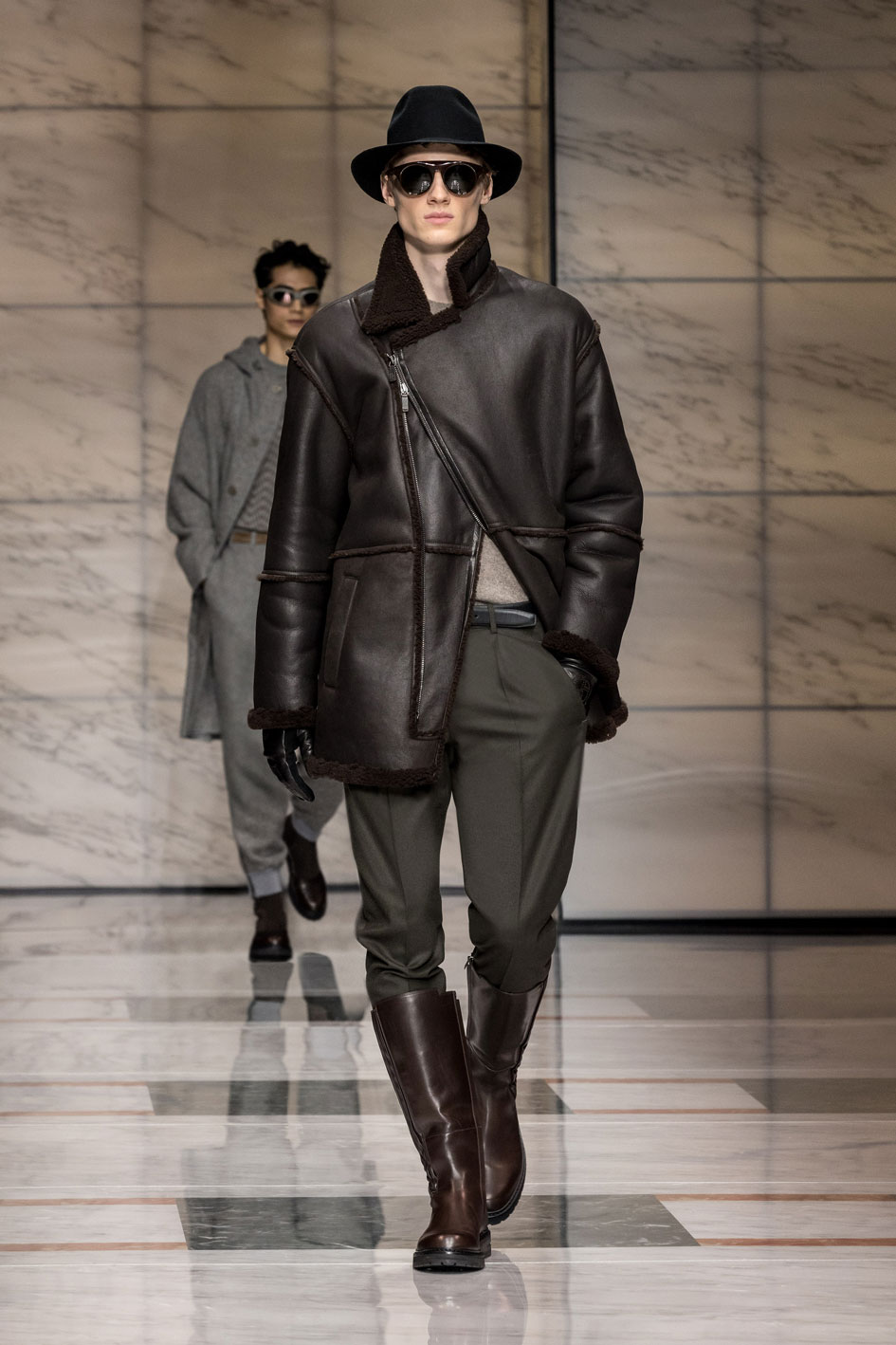 As is standard for any Armani collection, the emphasis was on an almost impossible-to-attain combination of true style and maximum comfort.  The shapes were form-fitting but loose; relaxed yet considered.  The details brought their own rewards for the eye.  The elasticated hood on the crushed velvet double-breasted jackets was one such example.  The way the light played off those velvety contours was almost hypnotic.  The five-button suit jackets.  The faux fur neck wraps and accents.  The tonal zig-zig patterning on the navy blue suit and matching shirt.  Each look was a Matryoshka doll of design discovery. 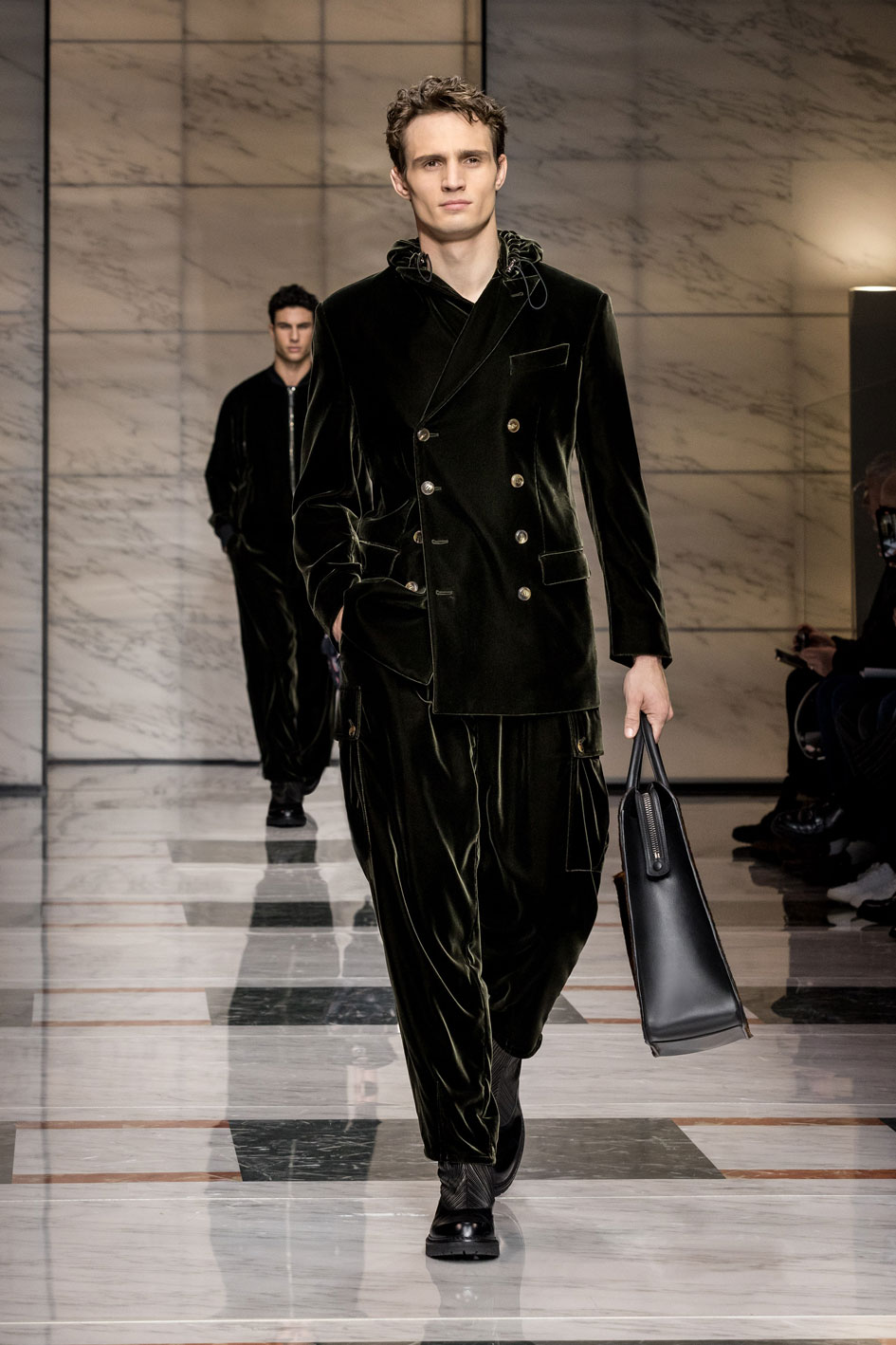 And what would a winter collection from the Italian master be without the skiwear for the weekend slopes?  Here the tones were either red or grey, and usually in some sort of effective and head-turning combination of both.  So, whether it’s navigating the city streets or the black mountain runs, Giorgio Armani men’s AW23 already has you covered. 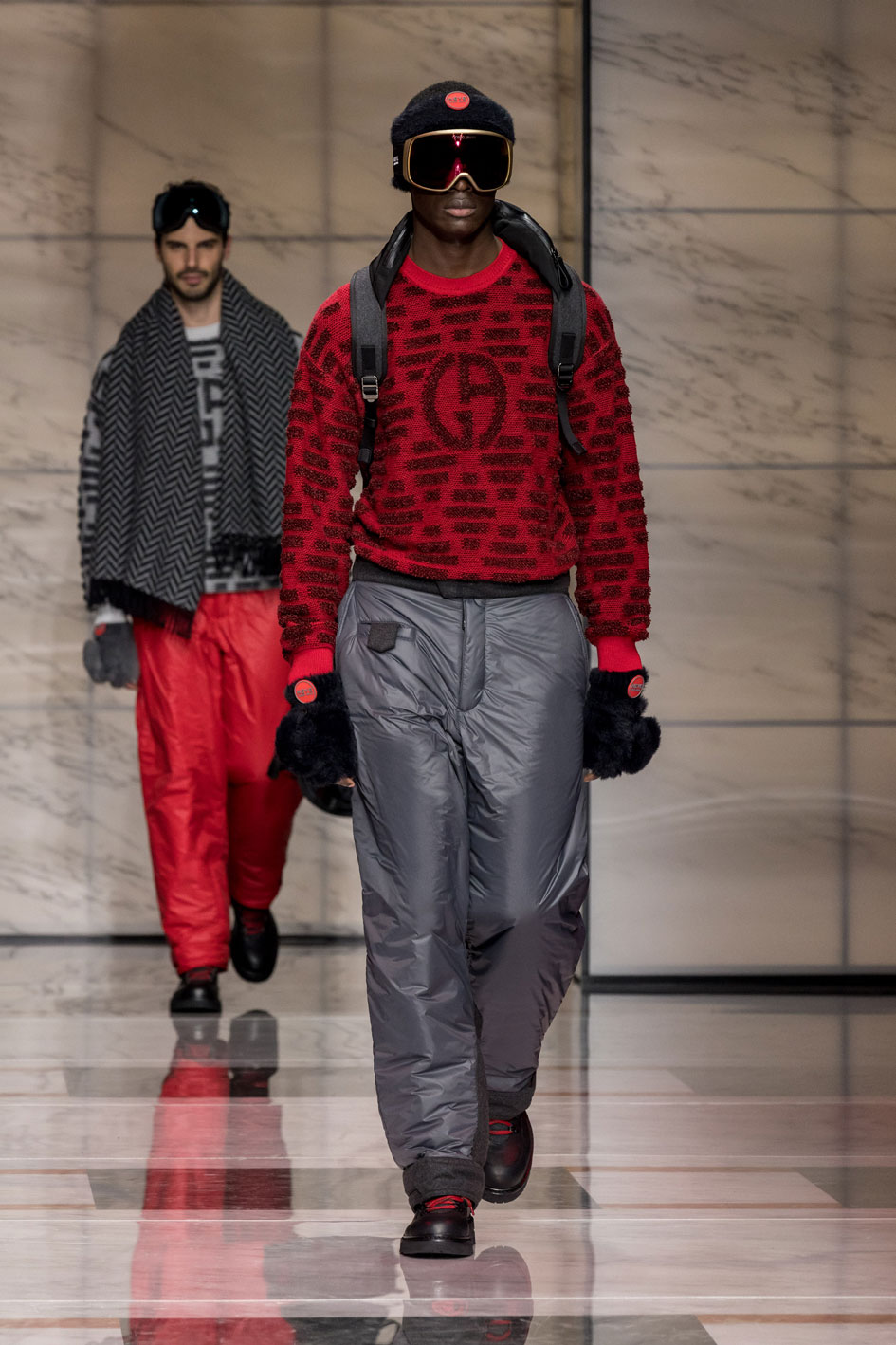 To read the review of the Canali mens AW23 show, click here