Virginie Viard takes the Chanel brand on a new journey in a fitting setting after the passing of Karl Lagerfeld. By Chidozie Obasi

Karl Lagerfeld’s successor at Chanel, Virginie Viard, had collaborated alongside the the great man for over three decades before his recent untimely passing.  Nonetheless, the latest collection epitomised her first as the new creative director while the show still paid homage to the man who had been at the helm since 1984.  The invitation for Chanel’s Cruise show came as a plain white card, characterising a “blank” momentum or an abstract definition of re-birth and a new chapter for Virginie and the whole team at Chanel.  Presenting the brand’s Cruise 2020 collection at the Grand Palais in Paris, Viard shepherded Chanel into a new era by staying true to Karl’s staggering vision and eclectic aesthetics. 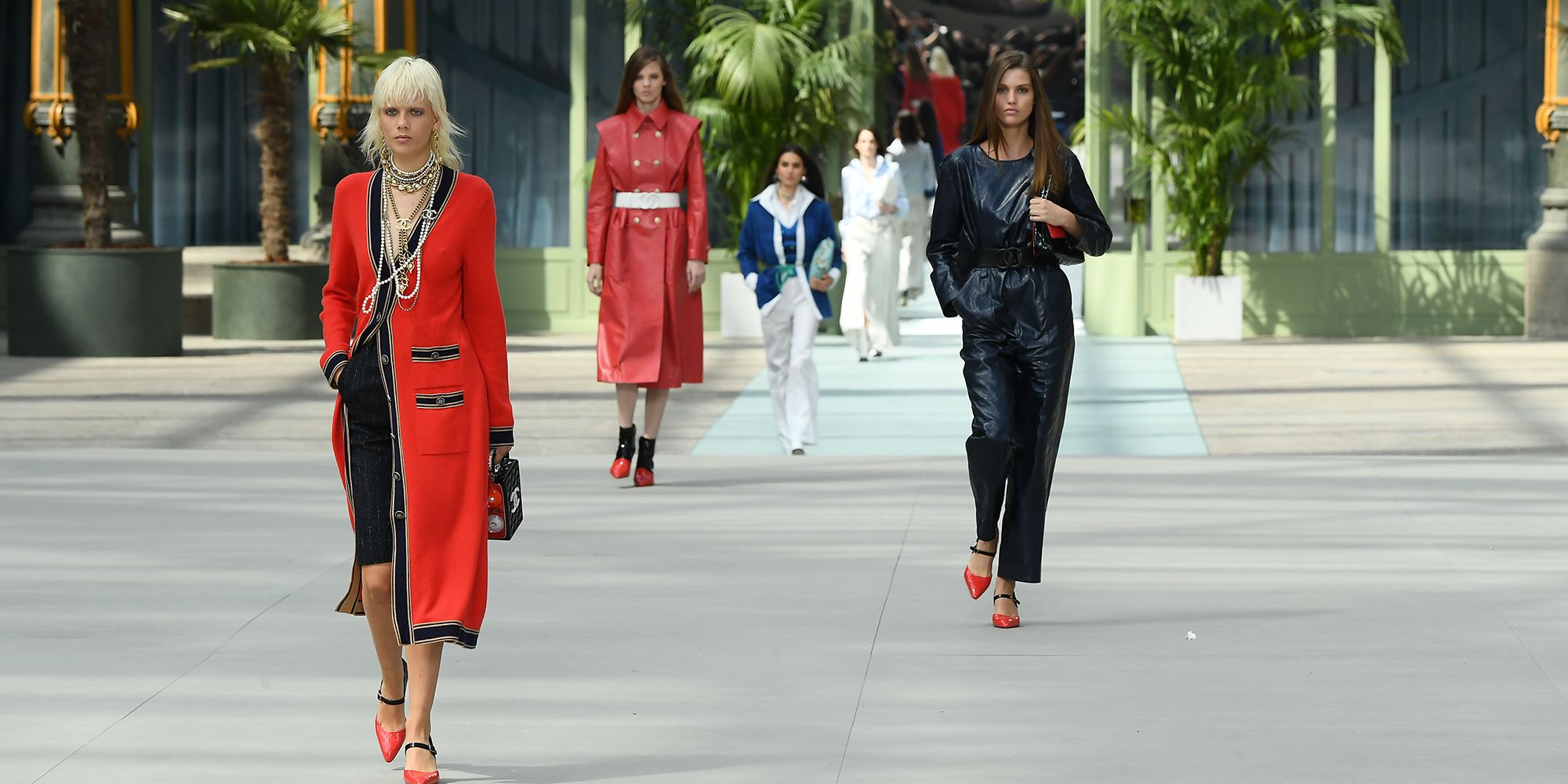 During his creative tenure at Chanel Lagerfeld became a truly noteworthy figure for his powerful catwalk sets and eccentric seasonal themes (shops, airports, spaceships, beaches, etc) which enabled him to establish an ageless legacy at the house.  It also allowed him put an indelible stamp on the not-so-ephemeral world of haute couture.  The latest collection saw the brand storm its catwalk in a Beaux-Arts style train station, with models walking on the train platforms alongside the tracks. Another divinely fabled venture, this time symbolised by absence of the emperor himself.

Counting a total of 79 looks, the collection included countless staple tailored pieces such as tweed and suiting, all of which remained true to Gabrielle’s and Karl’s vision.  However, the imminent era foresees feminine eminence, evidenced by Chanel’s statement pieces like the blouses, belts and dresses. 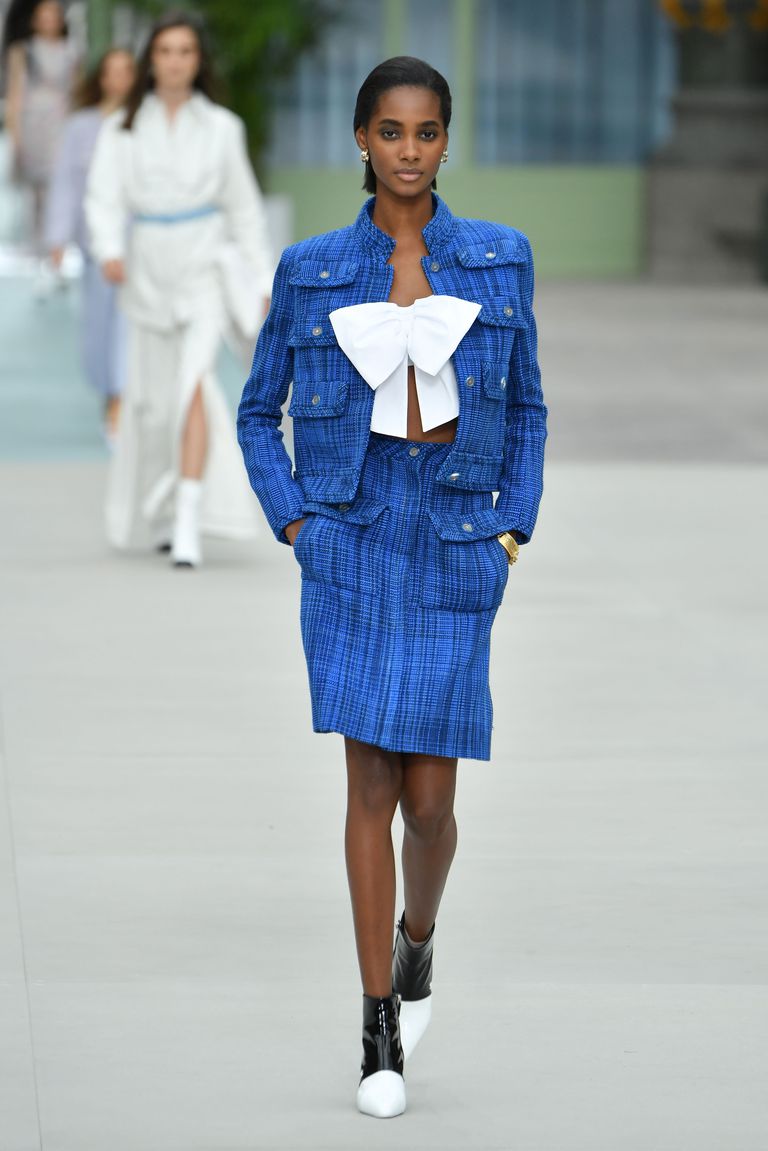 Floaty and sophisticated chiffon dresses featured powerful yet subtle layers of ruffles tinted in pastel hues. Belts were constructed in bag chains while necklines and wrists were layered by jewels and pearls. Of course, tweed was not to be left out.  A multitude of thigh length skirts came in the woven fabric.  Furthermore, a masculine edge made its own epic claim, noticed through cropped trousers heralding a practical yet chic accent for a woman’s allure and tantalised by structural jackets. 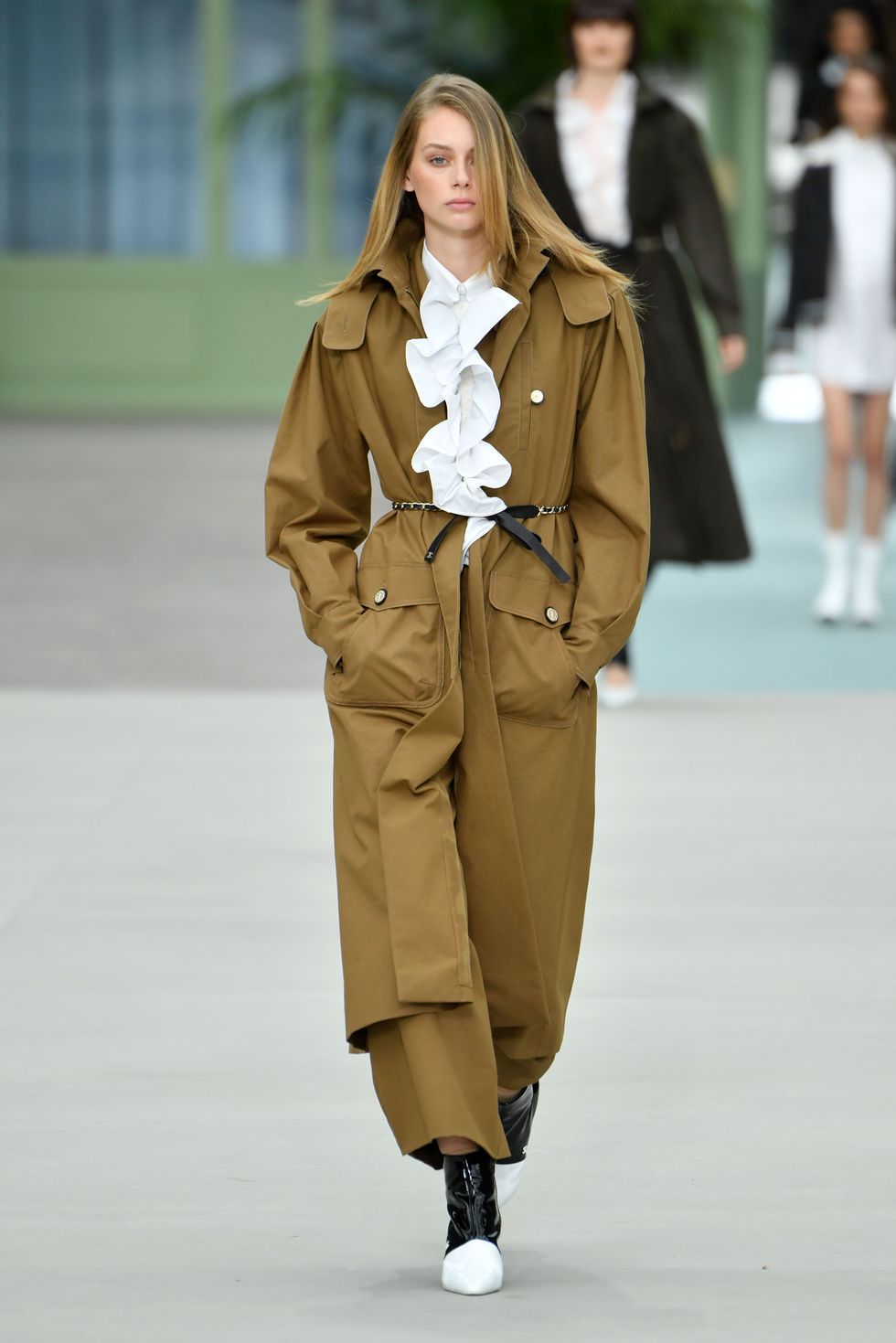 Outerwear was also at the forefront of the collection’s finest pieces, and ranged from cardigans to trench coats.  The outerwear apparel featured multi-pockets and precise fastenings to add a sense of utilitarianism to the full looks.  As for the chromatic game, pops of neon added effervescence to the accessories, including two-toned sets of handbags as well as bum bags accompanied by oversized pink carriers held under the arm and micro-quilted bags jazzed up by plenty of decorations.

So, here’s to an exciting new era for Chanel and the hope that it will never lack its undying grace.

To read our review on Dior Resort 2020 click HERE.