Much has been written regarding Cher’s surprise appearance at the denouement of the Balmain SS23 show at the Stadium Jean Bouin for Paris Fashion Week.  A contemporary renaissance woman, the multi-hyphenate icon was living proof that forward-thinking ideas and fresh approaches are always the keys to longevity. 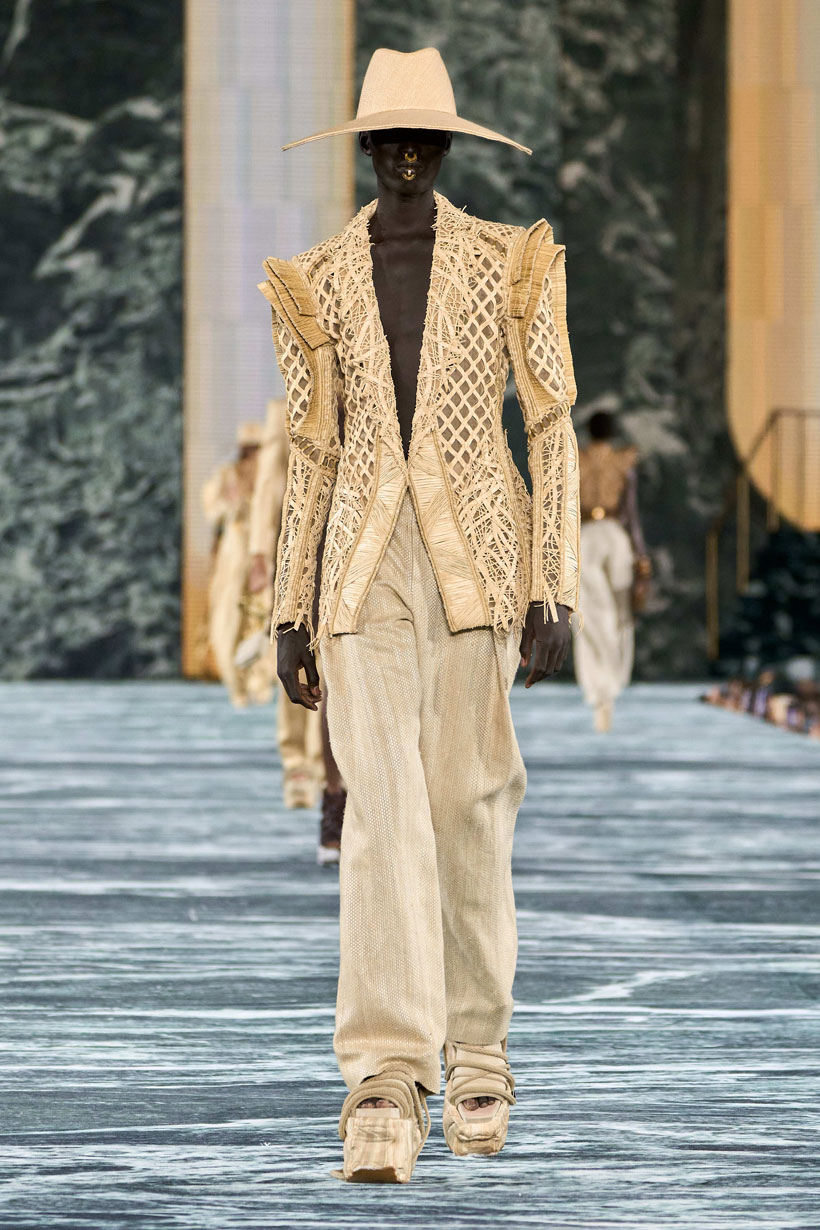 With that in mind, it seemed prescient that she found herself on stage with an Olivier Rousteing who had found himself preoccupied with creative notions of rebirth of late.  In the wake of the devastating wildfires and unprecedented heatwaves that ravaged France last summer, the Maison’s creative director used his new collection to call for a radical and sustainable reconceptualisation of fashion. 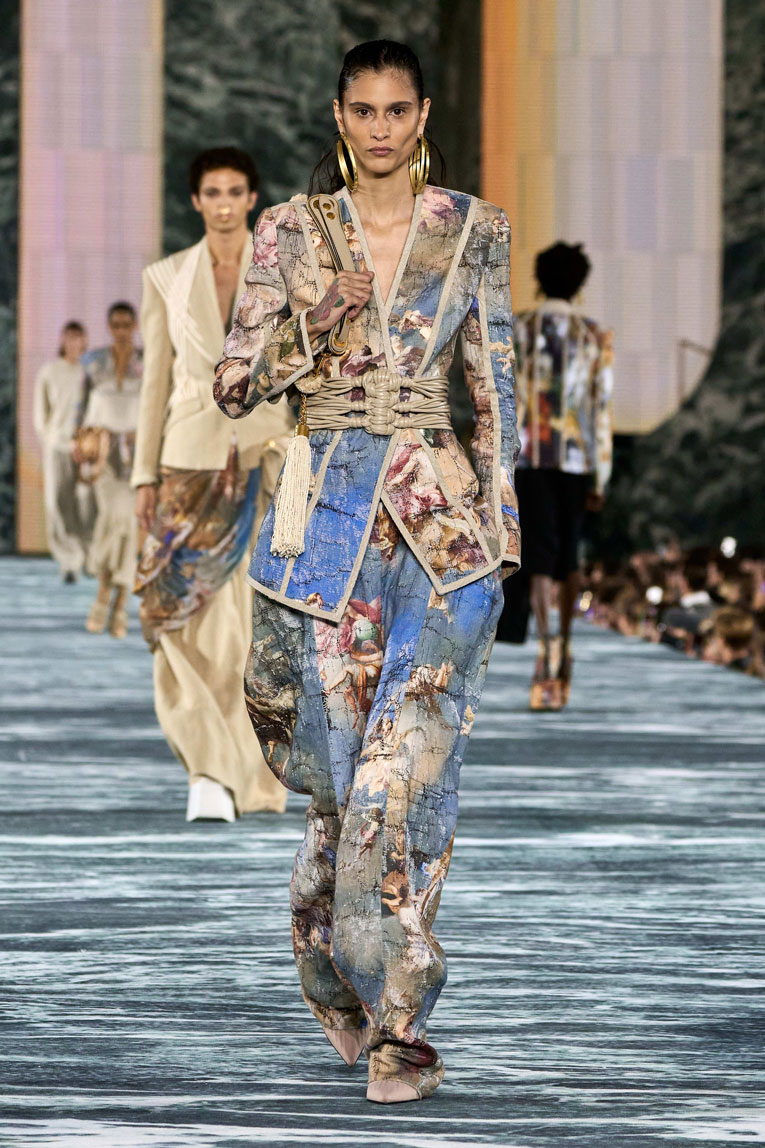 The urgent need to protect the Earth was clearly felt throughout a show comprising both Ready-to-Wear and couture offerings. Recycled, raw and undyed fabrics were prevalent in a determined effort to reduce the impact of water pollution on our planet.  In one instance, a long ecru overcoat was left with frayed hems intact.  In another, a loose oversized sweater was deconstructed into a macrame weave. 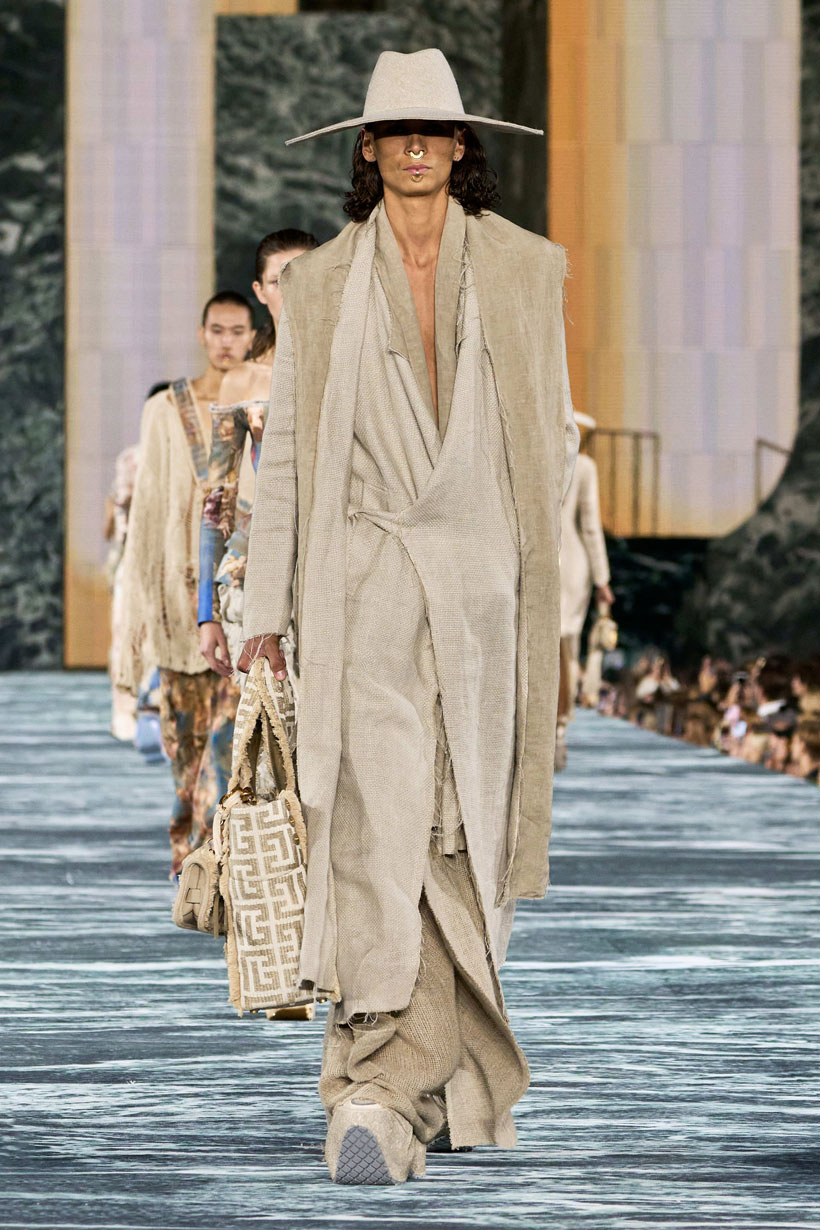 Elsewhere, wood textures were in the ascendancy, with bark, branches and twigs – sourced, not harvested – from the natural world creating new theories on design.  Oak was softened and woven directly on to models for couture pieces Rousteing describes as his “little bark dresses.”  Raffia also featured prominently, spun and stitched into RTW architectural marvels that easily stood alongside their couture counterparts. 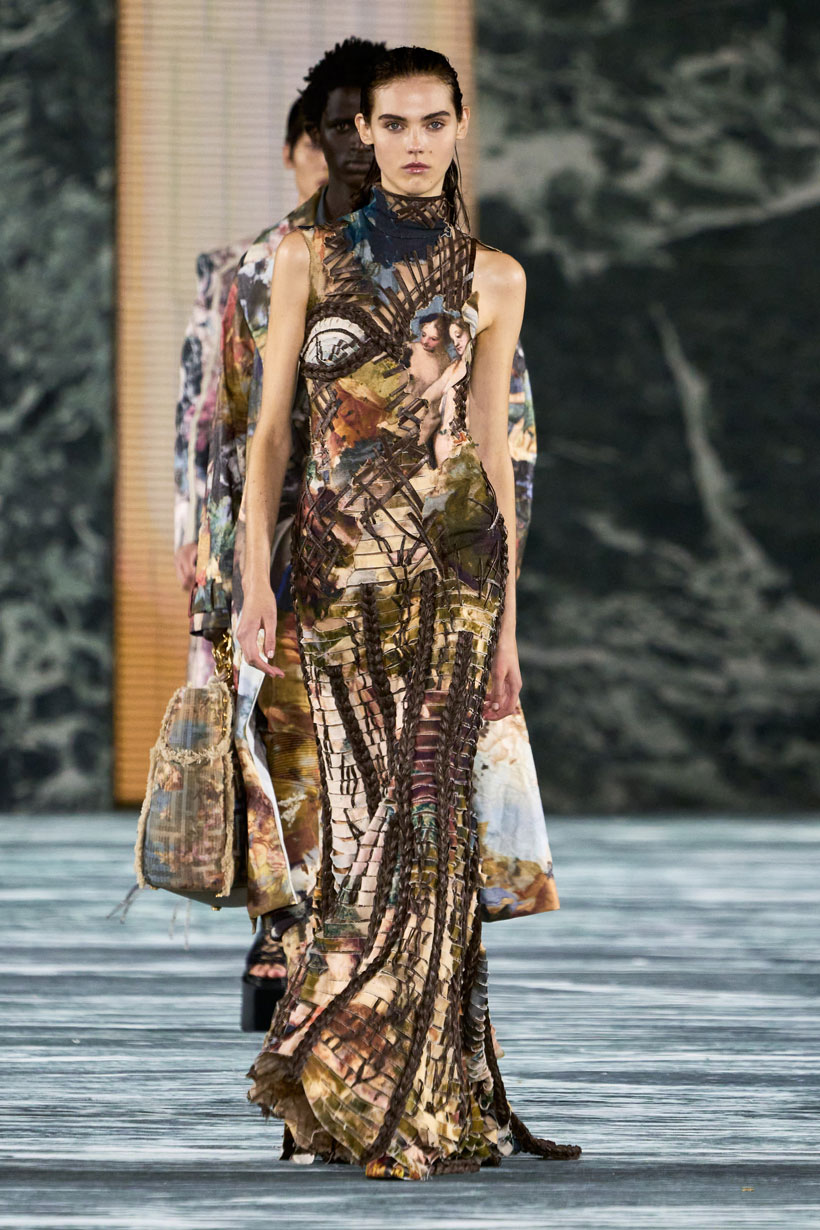 Nowhere were the meditations on reawakenings more explicit than in the myriad of pieces that paid tribute to the Renaissance – in both senses of the word.  Heavenly scenes and nude images on blazers, gowns, overcoats and bags gave the impression of being clad in 16th Century art viewed through a contemporary prism. 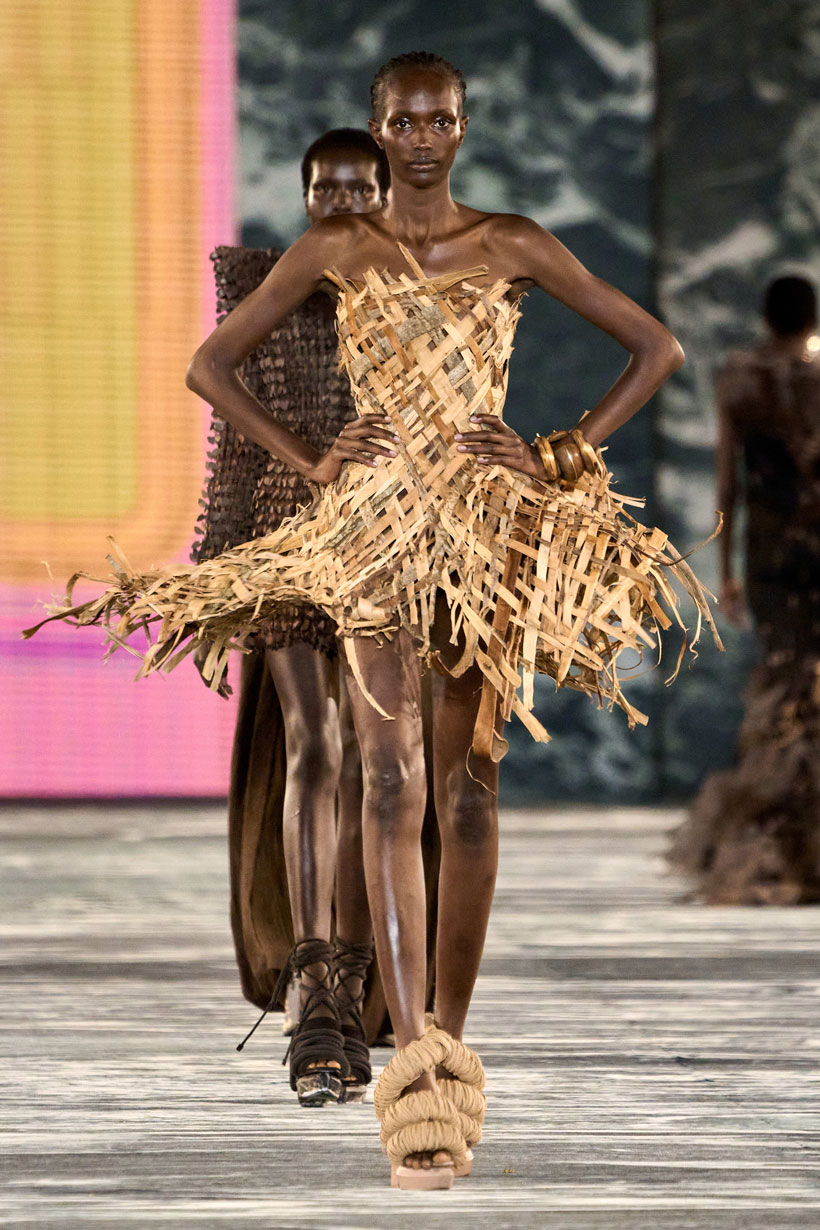 Finally, many pieces took cues from African visual aesthetics, exploring the influences of Rousteing’s own recently discovered Somali and Ethiopian heritage.  Yet, as he remarked in the accompanying show notes, these influences also spoke to the fact that Africa was the “very birthplace of humanity” – ideal framing for an amazing Balmain SS23 collection with an existential call to arms at its heart. 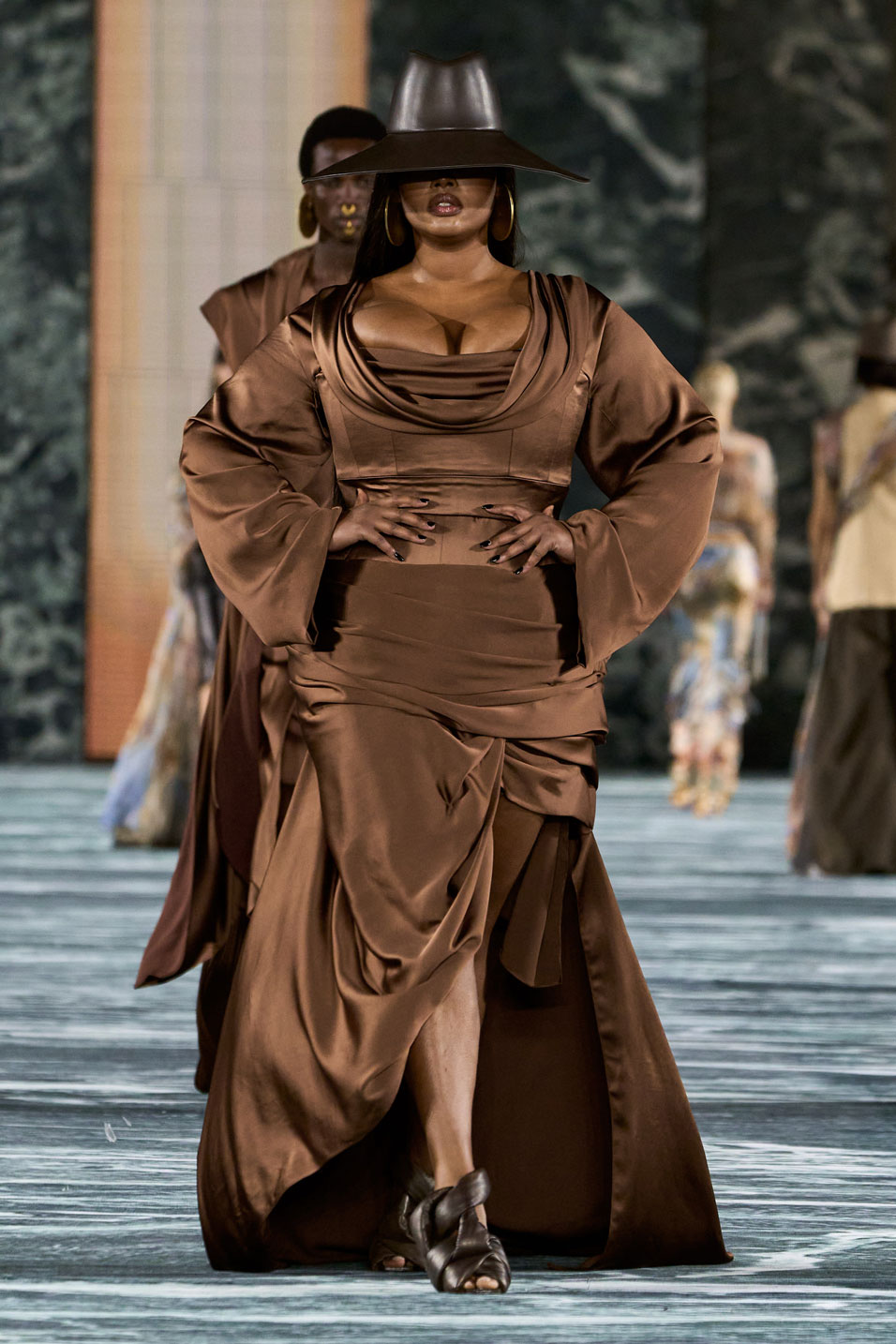