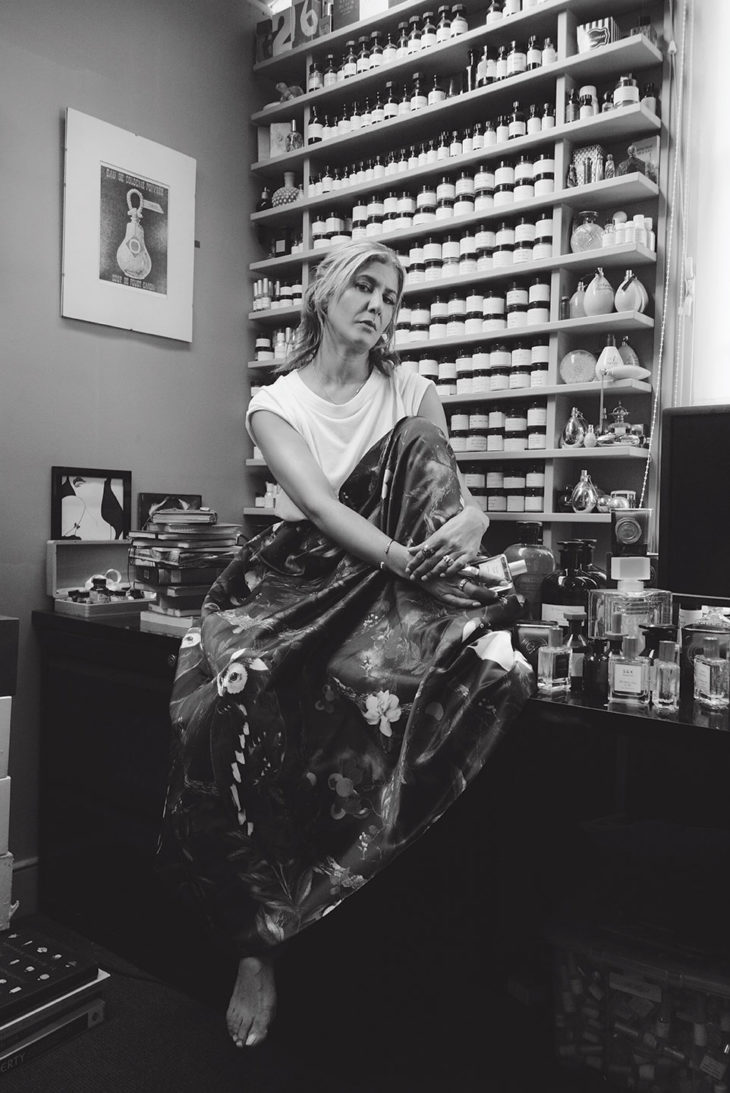 After two decades in the fragrance world, Azzi Glasser knows instantly how to harness a person’s scent. That’s why Johnny Depp and Jude Law trust her with their innermost thoughts.

Azzi Glasser scans over a press release, looking for her favourite quote. “‘When I first met Azzi we just hit it off,’” she reads. “‘We approach what we do in similar ways, getting to know our subjects, their personalities and how they want to present themselves to the world to capture their life.’ That’s from Rankin,” she smiles, referring to John Rankin Waddell, the acclaimed British fashion photographer who co-founded the cult magazine Dazed & Confused in 1992.

We’re sipping tea in Glasser’s at-home office – part apothecary, part fashion-book library – in north London. She stops the interview every few moments so we can dip noses into her endless collection of scents, many of which she created bespoke for the very rich and very famous (how many can say that they’ve “smelled” Johnny Depp?). Her database includes Jude Law, Helena Bonham Carter, Tom Hardy and, most recently, an unnamed member of the royal family. While these scents are strictly exclusive to her clients – who pay £15,000 for her service – Azzi’s latest collaboration, S&X Rankin, was designed for the photographer but is available to the public. “I do one collaboration a year and I wanted it to smell like two bodies that are together,” she says. “It’s Rankin, so what else am I going to do except the smell of sex?”

Glasser, 47, has worked in the perfume industry for more than two decades. As well as her work with the Hollywood elite, she has designed perfumes for some of the biggest fashion labels in the world and created bespoke scents for Kylie – The Exhibition at the V&A, Daydreaming with Stanley Kubrick at Somerset House and candles for London’s Chiltern Firehouse. In October 2015 she made 11 fragrances for Harvey Nichols via The Perfumer’s Story, her own ever-expanding company. To coin a phrase, she has a real nose for business.

top by Osman, skirt by Alice and Olivia, shoes by Malone Souliers, all from Harvey Nichols

“I learnt about the technicalities of the molecular world of perfume and how it’s structured. But creativity is what you bring to it. You can’t learn creativity. I was a bit of a rebel and ignored most of what I was taught.”

Born in north London in 1970, Glasser lived in Mumbai and Goa with her grandmother until she was four, then returned to the UK to live with her parents. Some of her most evocative memories are of being back in England for the first time. “I didn’t know what London was,” she says. “All those tall, grey buildings. I thought I was being sent to prison. But I liked the smell. I loved it when it rained. It reminded me of India. When it rained during the monsoon all the children would go out and play. Even now the smell stirs something in me.”

Her mother also left a whiff of Chanel perfume whenever she went to parties. “I’d watch her get dressed, stick on false eyelashes and a fur coat and leave this incredibly expensive aroma behind,” says Glasser. At school, she was adept at science and maths. “I suppose that makes sense because there is a lot of science in making perfume. I was always good at balances and formulas and working out percentages in my head. But I never knew this is what I’d end up doing. I didn’t even know you could do it as a job. I just fell into it.”

Glasser’s first job in the perfume industry was at CPL Aromas, aged 21. Working under the company’s director she travelled the world and worked on fragrances for different brands. “I didn’t know I had strong nose until I came into the industry and they tested my sense of smell,” she explains. “I learnt about the technicalities of the molecular world of perfume and how it’s structured. But creativity is what you bring to it. You can’t learn creativity. I was a bit of a rebel and ignored most of what I was taught.” It was then that Glasser realised that the rich and intoxicating smells she loved as a child had been replaced with, “cheap, light, watery, unisex perfumes that all smelled the same. I was frustrated. Is this really the perfume industry? It seemed so white-coated and scientific and I didn’t see much of the artisan or creative side.”

“The perfume industry is renowned for following trends, but I don’t follow them. I have always believed that if I’m working with a brand or a person, I should recreate their world in that perfume.”

Subsequently, she went solo and, in 1999, co-founded Agent Provocateur Parfum. It was the first time since Chanel that a fashion house had enlisted an in-house perfumer, rather than outsourcing to a conglomerate such as L’Oréal or Procter & Gamble. “We wanted to get something out there that was beautiful and bring that raison d’être back into the industry,” she says, reaching to a high shelf for the pink, egg-shaped bottle of the original signature perfume, which still smells of the instantly recognisable and delicious scent.

The fragrance scooped various awards, launched in 60 countries and put Glasser firmly on the perfume map. She continued to make Agent Provocateur perfumes until 2011 – as well as for Nicole Farhi, Jasper Conran, Monsoon and Reiss along the way. “The perfume industry is renowned for following trends, but I don’t follow them,” she says. “I have always believed that if I’m working with a brand or a person, I should recreate their world in that perfume.”

In 2011, then-Prime Minister David Cameron asked Glasser to make a scent for the Great campaign, a project to boost business and tourism ahead of the 2012 Olympic Games. “I went back to my early memories of rainy England and made the smell of rain, earth, mud and grass,” says Glasser, who begins the physical process of making perfume in her north London home-slash-studio. The finer details of the fragrance are then formulated in a laboratory. “I source ingredients from all around the world, in particular, India, Java, South America and Morocco,” she explains. “Rose de Mai, vetiver and myrrh are wonderful ingredients.”

“Clients often tell me their favourite scents, but I don’t take any notice, because they don’t know what the real smell is and how it comes out in fragrances. Jasmine is not jasmine when you mix it with so many other ingredients.”

Accolades and national adoration aside, it’s Glasser’s work with film stars that’s especially interesting. “Hollywood actors can afford the bespoke service, but they also care a lot about how they smell,” she explains. “They want that individual smell because they know how important it is to be unique.” A session typically begins with a one to three-hour consultation at Glasser’s office, where she interviews the client about their life and background. “They love coming here,” she says. “Jude Law sat on the floor.” The unnamed royal called it a “fun therapy session”.

Glasser gets that a lot. “Not because I ask your problems, but because I delve into who you are as a person,” she says. “What you remember as a child, what you like to do and where you work and travel. Some areas we might dwell on longer. Most people have two personalities, the one they portray to the outside world and the inside one that comes out when you get to know someone better. I need to access both of them. I’m also looking at your style because everyone has their own sense of style and that’s very important to smell.” Throughout the session, she formulates ideas, so that by the end she has an exact idea of what to mix together.

From start to finish the process takes no more than a month. The only client not to come to her office has been Depp. “Helena [Bonham Carter] said Johnny wanted to meet me at Pinewood Studios, but it was quite last minute and I only had a week to create his scent,” Glasser recalls. “Because I was such a big fan of his I knew exactly what he should smell like. The fact I could have got it wrong didn’t even occur to me. You have to have confidence in this job. I met him in his trailer with three separate scents that were basically the same, but with very subtle different balances. The one he chose was the one I knew he’d choose.”

So, how does Johnny Depp smell? Expensive, a tad musky and very masculine. “His style is cool, edgy and turn of the century,” says Glasser. “I see him as the sexiest man on the planet and he likes that. He’s very conscious of the way he looks. He now tells me he’d rather wear nothing than wear anything else.”

When it came to her collaboration with Rankin, she didn’t even give him options. “He said, ‘Is this it? You’re just giving me one sample?’ I said, ‘Yeah, I think you’re going to like it.’ He’s very fussy about perfume and buys a lot of it. He was almost in shock, thinking I must have so much confidence, but he smelled it and said it was amazing. I didn’t make any modifications.” Two months after their initial meeting, S&X launched. It is presented in the Azzi Glasser trademark black box with red wax stamp.

This year will see a new, as yet undecided, collaboration for Glasser, plus a worldwide hotel-amenities deal to initially launch in Stockholm next month, another hotel project in the UK, more signature candles and an actor story she hints will be “incredible – like nothing you’ve seen before”. Glasser’s real passion, though, is The Perfumer’s Story. “I just want my company to grow into a huge global success,” she says. “I love what I do so much and love people having my perfumes in their life. I want to die happy, with that thought.” Success, it seems, never smelled so good.

This interview is taken from the first issue of THE FALL, on sale now.