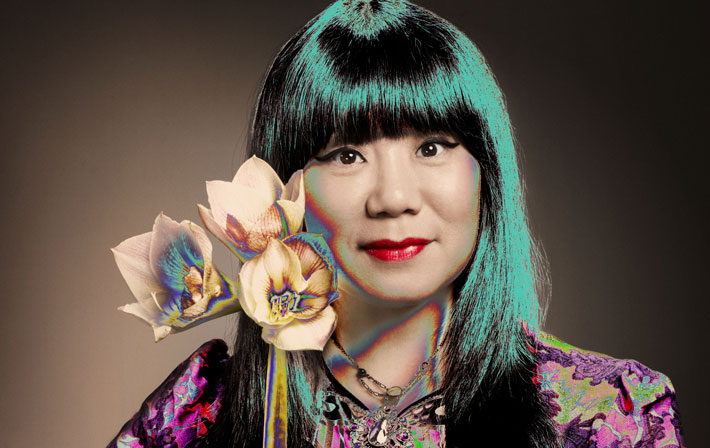 Opening in London this week at the Fashion and Textile Museum and with an accompanying book by Tim Blanks, The World of Anna Sui is a perfectly apt a description for a retrospective look at a designer who has spread her creative tendrils far and wide since her first catwalk show in 1991 while retaining a vision that is globally recognisable and coherent.

Sui has shaped not only the garments, textiles, accessories, beauty and interiors which comprise her design universe, but also heavily influcnced the course of modern fashion aesthetics. As much as any other contemporary creative, the world she inhabits is as true a reflection of the world she expresses through her art. As she recently told the New York Times: “My brand evolved out of my lifestyle; the way I lived and the way I decorated my apartments.”

Sui, who was born in Detroit, Michigan, and moved to New York to study fashion at Parsons, still very much embodies the bohemian spirit reflected in her designs and the way she has built her business. It was while she was immersed in the music scene of the early 1980s that she dreamed of dressing musicians – “When I started my own business, my main reason for designing clothes was that I wanted to dress rock stars and the people who went to rock concerts. It didn’t go beyond that aspiration at that point.”

Naomi Campbell at the opening party for my first New York boutique in 1992. Photograph by Eddy Sui.

“I love history. I love art. I like to mix it all together, but in the end it somehow has to all make sense. I mean I love ’60s psychedelic posters, but those were originally inspired by the whole Art Nouveau movement.”

Linda Evangelista at the opening party for my first New York boutique in 1992. Photograph by Eddy Sui

After finishing her second year at Parsons, Sui was hired by Erica Elias’ juniors clothing label Charlie’s Girls, where she learned by designing for sportswear labels and styling shoots for friend and former Parson’s classmate Steven Meisel. After the closing of Charlie’s Girls, Sui worked for several other sportswear designers including Bobbie Brooks and Simultanee.

During this time, she began designing and making clothes out of her apartment with the majority of her personal business focussing on sales to music stores. While working for the sportswear company Glenora, she brought her collection of five pieces to a New York trade show, and caught the attention of New York department stores Bloomingdale’s and Macy’s.

A few weeks later, those clothes were featured in a New York Times advertisement. The manager at Glenora, where Sui was still on the payroll, was furious when he saw the advertisement and fired her on the spot. Left without a job, Sui took her $300 in savings and started a business out of a little corner in her apartment’s living room. For several years, Sui ran the company from here, doing odd-jobs for spare income and reinvesting every penny of earnings into her business.

Artist Greer Lankton’s life-size doll of Diana Vreeland first appeared in a Barneys store window before coming to live in my apartment. Everyone who came over loved to pose with her. Anna Sui Archive.

“It’s important for me when I see something I like to go back and find out where it really came from. That’s also a way of educating myself and understanding what I love.”

When she finally gathered the fortitude to take her vision to the runways – with the encouragement of admittedly influential friends, including Meisel, Naomi Campbell, Linda Evangalista and Christy Turlington – what emerged was an eclectic mix of vintage and rock reworked for contemporary tastes that helped define the style of the 1990s and pull the fashion world away from the power dressing, gaudiness of the 80s. From the gothic to preppie, drawing on her migration from Detroit to New York, from psychedelia to grunge, her signature eclecticism reinvents pop culture for each new generation.

As Tim Blanks puts it so well: “When she’s designing, Sui is just as likely to weave in a favourite book, a film, a song, a fairytale or a flea market find, along with figments of her past, a rock star, a folk artist or some fabulous character she’ll rescue from anonymity with scrupulously detailed research. And once all of that is brought together, it makes a collection whose multilayers mix the familiar and the strange in that slightly dreamy new-vintage flavour that is her signature.”

The World of Anna Sui opens in London at the Fashion and Textile Museum on May 26th until October 1st and the accompanying book by Tim Blanks is published by Abrams on May 30th, available for pre-order now.