As part of Alexander McQueen’s pre-autumn/winter offering a group of twelve artists documented and presented their response to tot he collection for a new exhibition called PROCESS – a new multidisciplinary group display accompanied by a 160-page zine.  As a project, PROCESS was conceived to unite the ever-multiplying strands of fashion and art.  From papier-mâché dolls with collaged faces to embroidered polaroids and a self-annihilating wedding dress; the artistic scope of the exhibition proves wide-ranging and delightfully overwhelming. 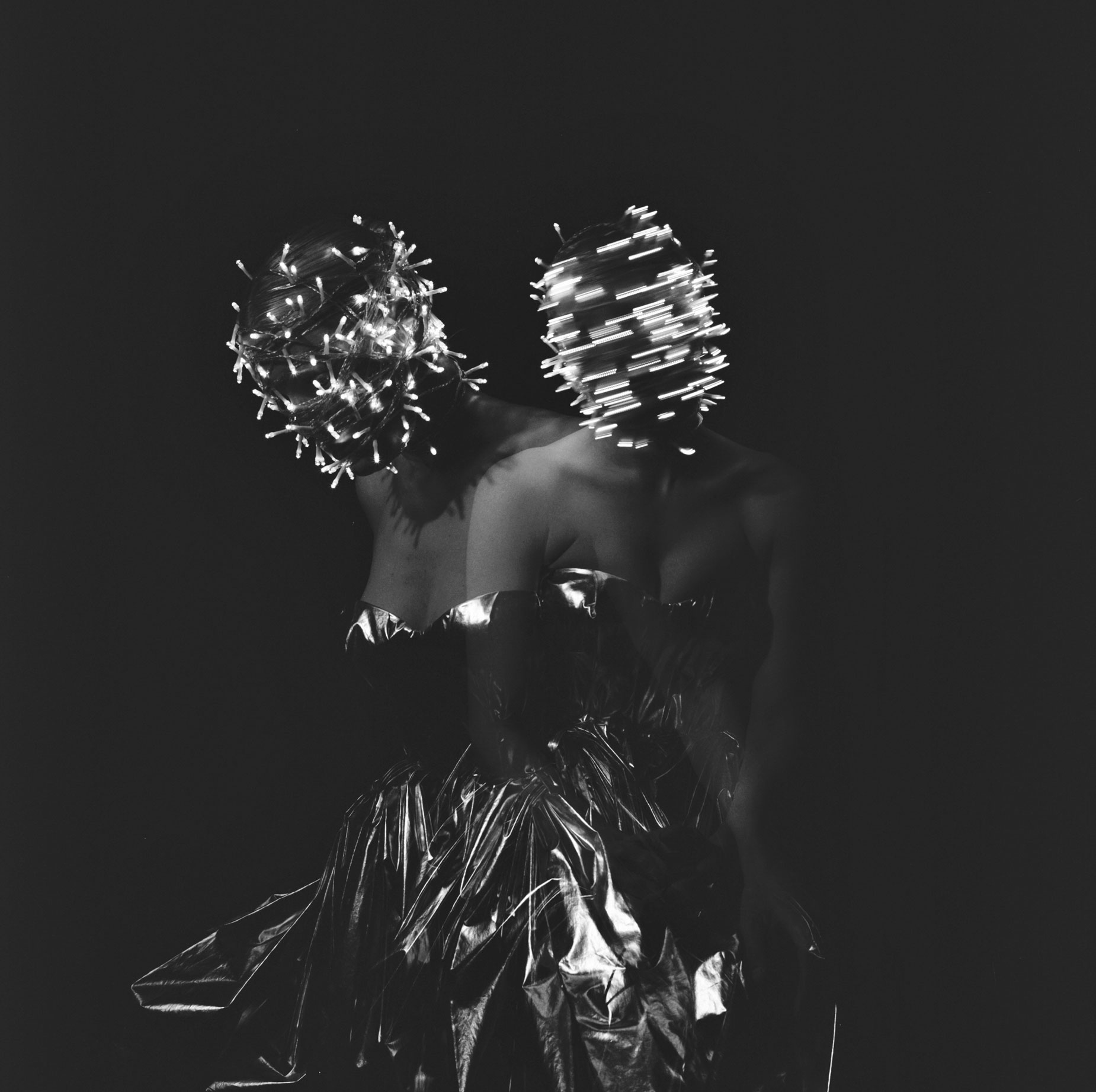 As McQueen’s creative director, it was important to Sarah Burton that the artists had “total freedom to respond to the looks.”  Each artwork was conceived to be exhibited side-by-side with the seasonal McQueen piece that inspired the artist.  Grounded by this shared source of inspiration, PROCESS offers a personalised insight into the often impenetrable idea of ‘artistry.’  “It’s been very interesting to see how creativity has sprung from so many different perspectives,” says Burton, “and the outcomes that have been varied and beautiful”. 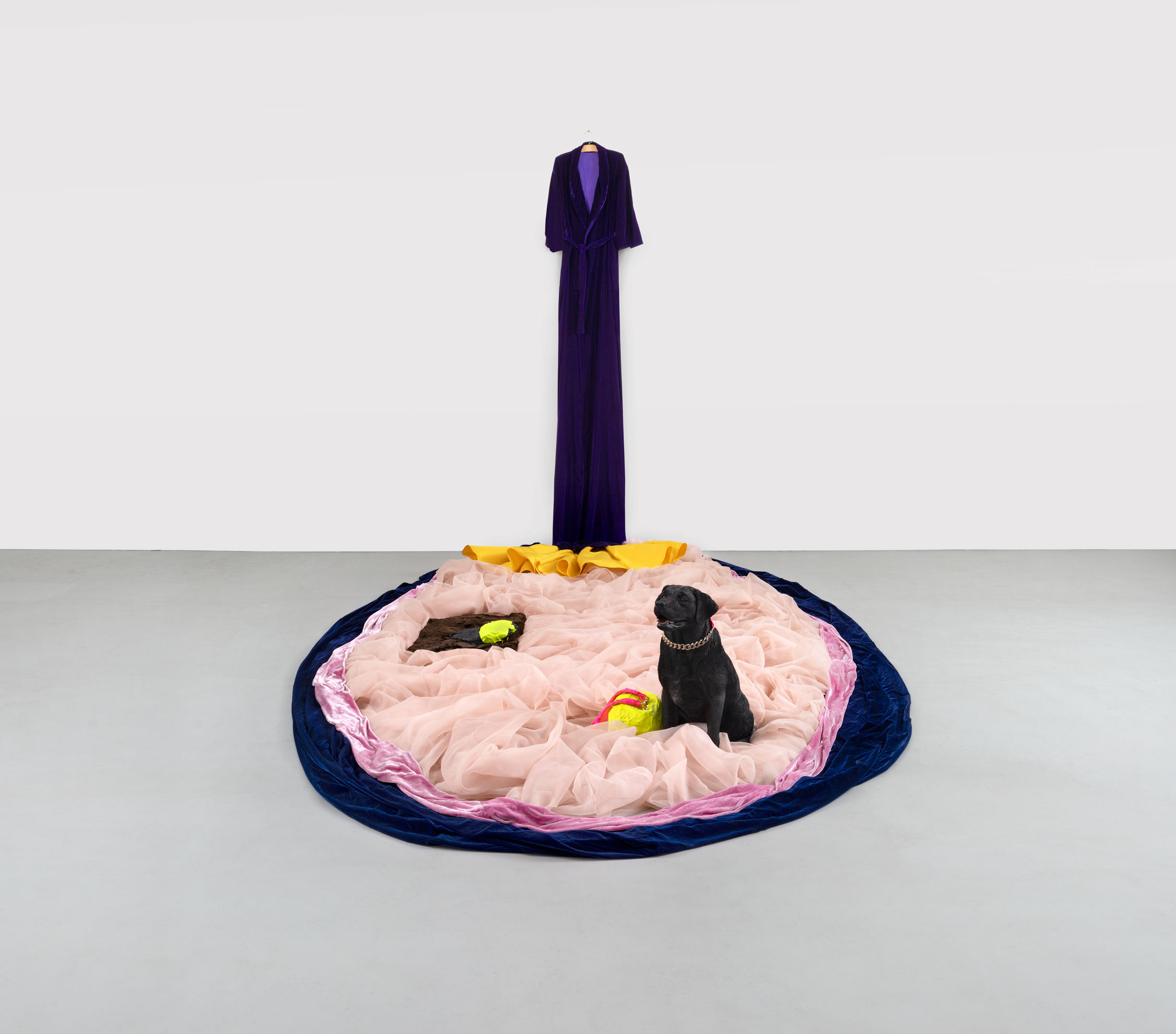 The multifaceted nature of the collaborations allows space for each stage of the creative process to be fully explored.  While finalised pieces from the artists and McQueen Studio are exhibited in the flagship store in central London; earlier designs, drafts, and wider experiments are also included in the expansive book-length zine that documents the work.  The artists were given the room to voice their own experiences and progression alongside images detailing the development of their works, offering a visual and anecdotal journey of artistic creation. 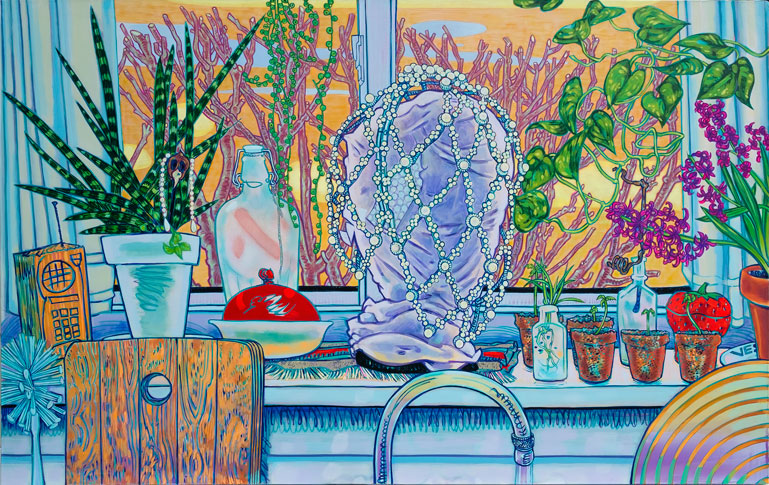 For Burton, and the late Lee McQueen himself, process and product are inseparable.  Therefore PROCESS represents not only the vision and procedures of Alexander McQueen and the chosen artists, but also the multiplicity of individual interpretation and the validity of our own subsequent responses and understanding.  The twelve artists invited to respond engaged deeply in a creative dialogue with the fashion House, using their preferred artistic mediums to reimagine and remake McQueen’s pre-fall vision – “Closer to the earth. Grounded.  A focus on silhouette.”

The twelve artists of PROCESS are from all over the world, with a history of revolutionary approaches in form and approach.  Their testimonials and personal artistic history focused on subversion and celebration. with a focus on the female body, femininity, female domesticity and representation for marginalised communities.  New York-based Beverly Semmes is recognised worldwide for her installations of large-scale feminine garments, while British artist Jackie Nickerson’s book Farm has been noted by Burton as “a continual source of inspiration in the [McQueen] studio.”  Fellow McQueen inspiration and muse, Guinevere Van Seenus, features as both subject, photographer and artist, with an envelope of fairy lights encasing her head, reminiscent of the McQueen AW13 pearl headdress featured in fellow PROCESS artist Hope Gangloff’s Spring Still Life with McQUEEN Pearl Headpiece and Rose of Sharon Bushes. 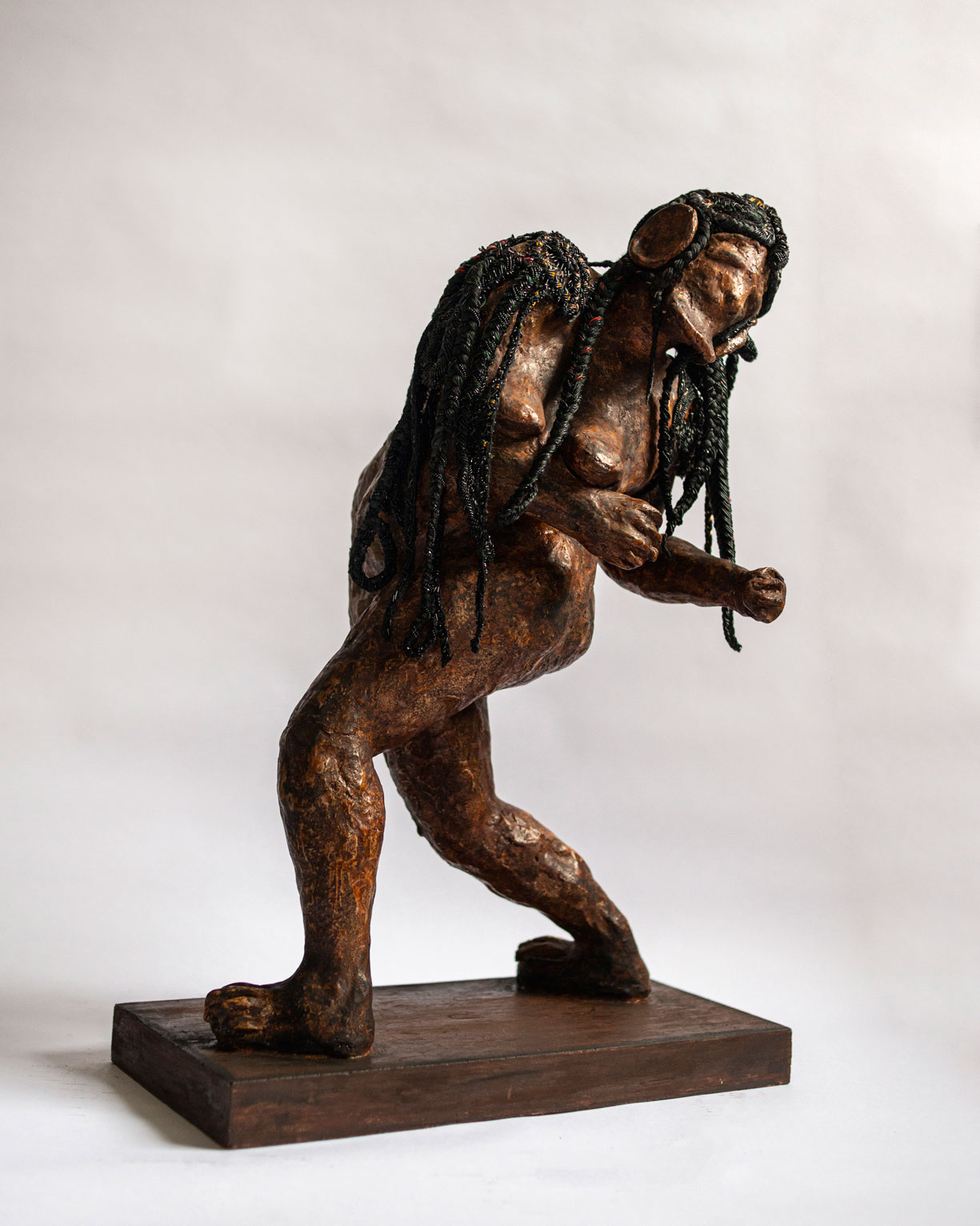 Extraordinary work from Marcia Kure’s The Amina Project draws on McQueen’s crystal graffiti embroidery and explores the body as a device for historical communication in honour of Queen Amina – the warrior ruler of the Hausa State of Zazzau.  Embroidery and “the marks of life” also offered inspiration for Britist artist, Marcia Michael.  Earth Bound serves as a testament to all women who, Michael states, have “stood the test of time”.  The embroidered features of her work were created alongside the team in the McQueen studios.  With Earth Bound, Michael continues to challenge the eurocentric history prevalent in the foundations of fashion, restructuring the record through the prism of the empowered, political and self-loving Black body. 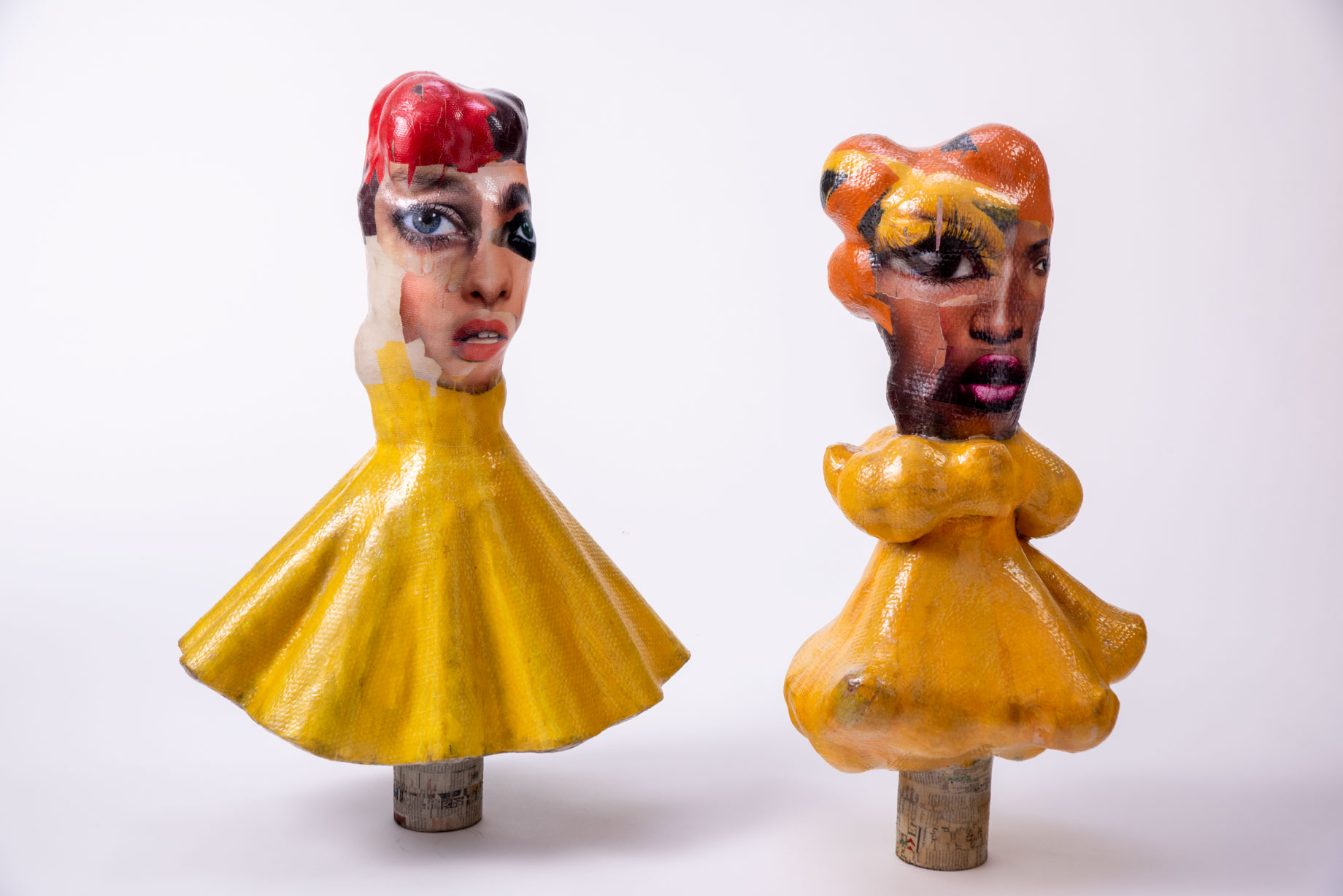 Christina De Middel and Marcela Correa similarly challenge the representation of the female body with Housewife of the New Domestic and Dressing Yellow.  For Correa, the the use of colour as a three-dimensional material represented the next step in her lockdown-inspired model making.  While De Middel’s moving yet bodiless dress deconstructed the inflicted and self-inficted borders of attire.  Judas Companion, Beverly Semmes, November Høibo, and Bingyi approached McQueen’s materiality with a view to repurpose and extend beyond the realms of ready-to-wear.  Bingyi’s wedding dress is a feat of ambition reminiscent of the great performance art runways of Alexander McQueen.  Bingyi describes the dress as a waterfall “flowing off a woman’s body.” As she walks down the aisle, the dress will fall off in pieces until she reaches the altar in the final ‘underwear’ dress to marry her partner dressed in the calligraphy print of a ‘wailing love letter’. 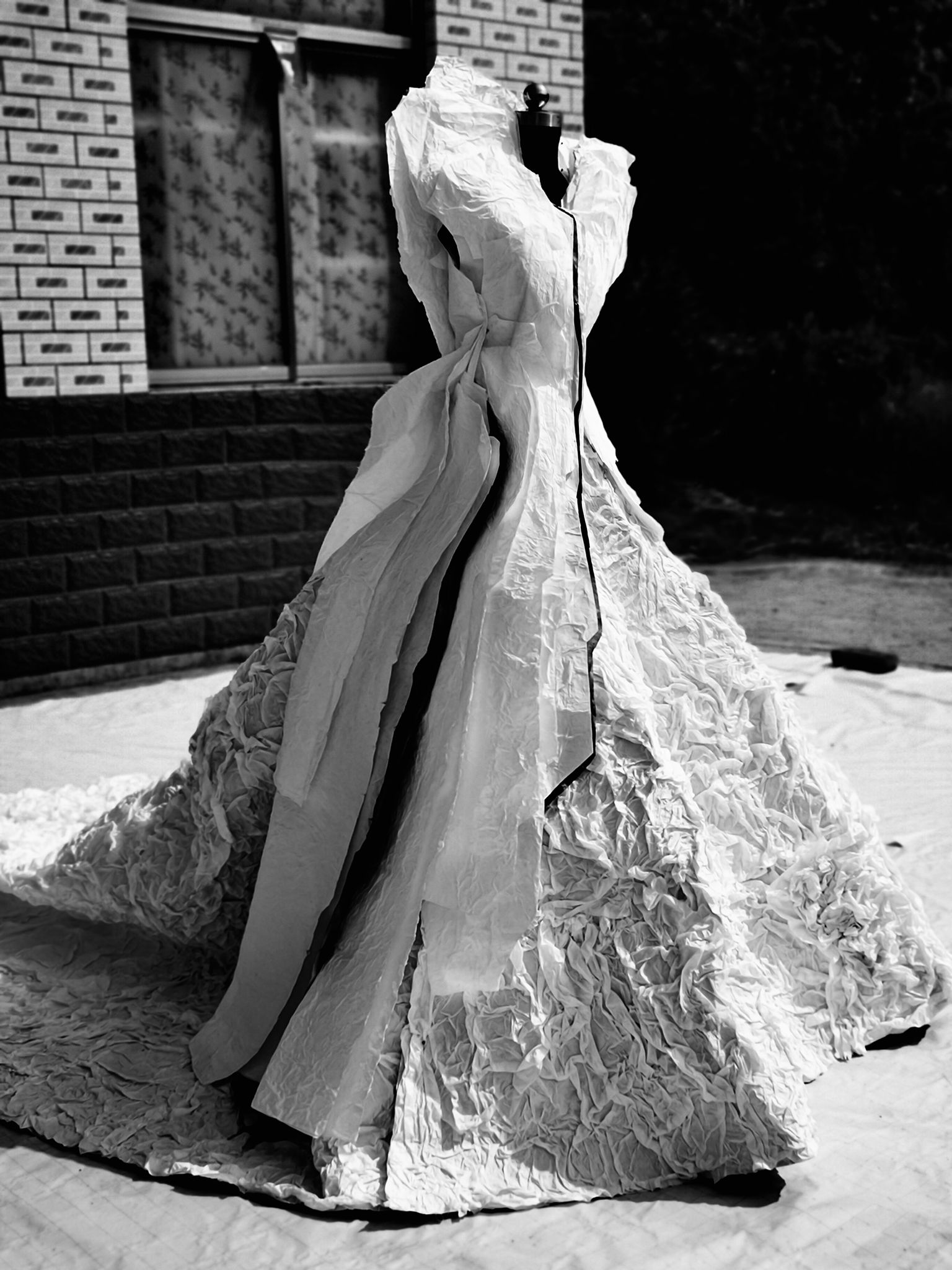 Bingyi | The Wedding Dress That Takes Off Itself

To see the full exhibition, PROCESS is open now in the Alexander McQueen experiential space and store on Old Bond Street in London.  For the temporary installation, the store has been transformed into an impromptu art gallery with the zine available to purchase in store.  Art and fashion side-by-side, as it should always be.