After a slightly enforced quiet period Alexander McQueen has exploded back into our fashion consciousness with new men’s and women’s collections for 2021.  We recently covered the campaign images for the women’s pre-spring ’21 and now, with both full collections officially launched today, we’re able to take the deep dive into the womenswear offering for SS2021 we’ve all been waiting for. 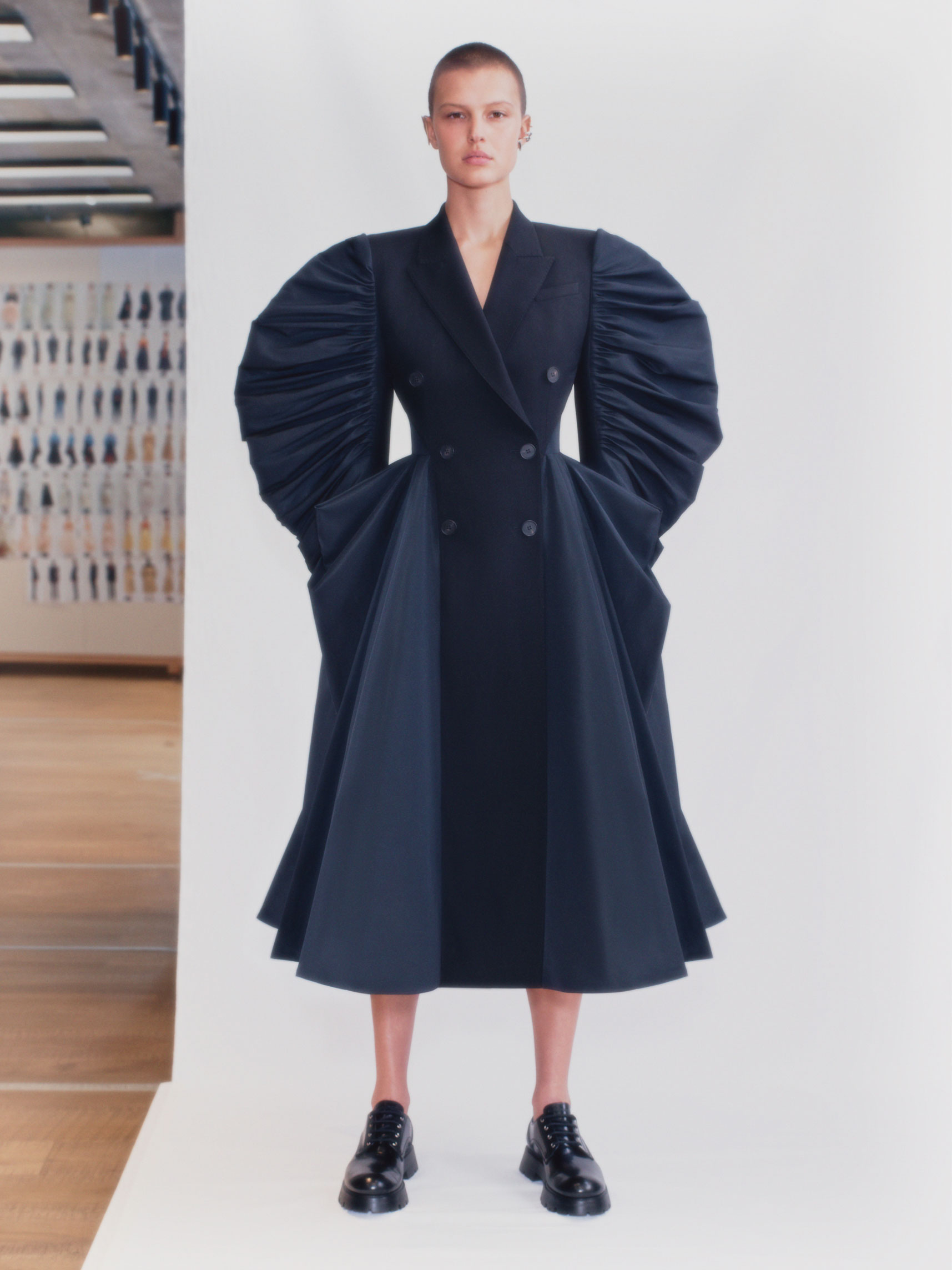 As with all Alexander McQueen collections, there’s a healthy mix of modernism, innovation and romanticism acting as the central narratives to the overall womenswear story being told.  Everything is underpinned with a subtext of tailoring, cut and visually exciting silhouettes and, as with all good stories, there are some unexpected twists to the tale thrown in for good measure.  Puffed, oversized sleeves are one the the recurring subplots and are used to extraordinary effect on looks like the double-breasted two-tone overcoat, the belted beige rain mac and the belted, polar white shirt-dress amongst others. 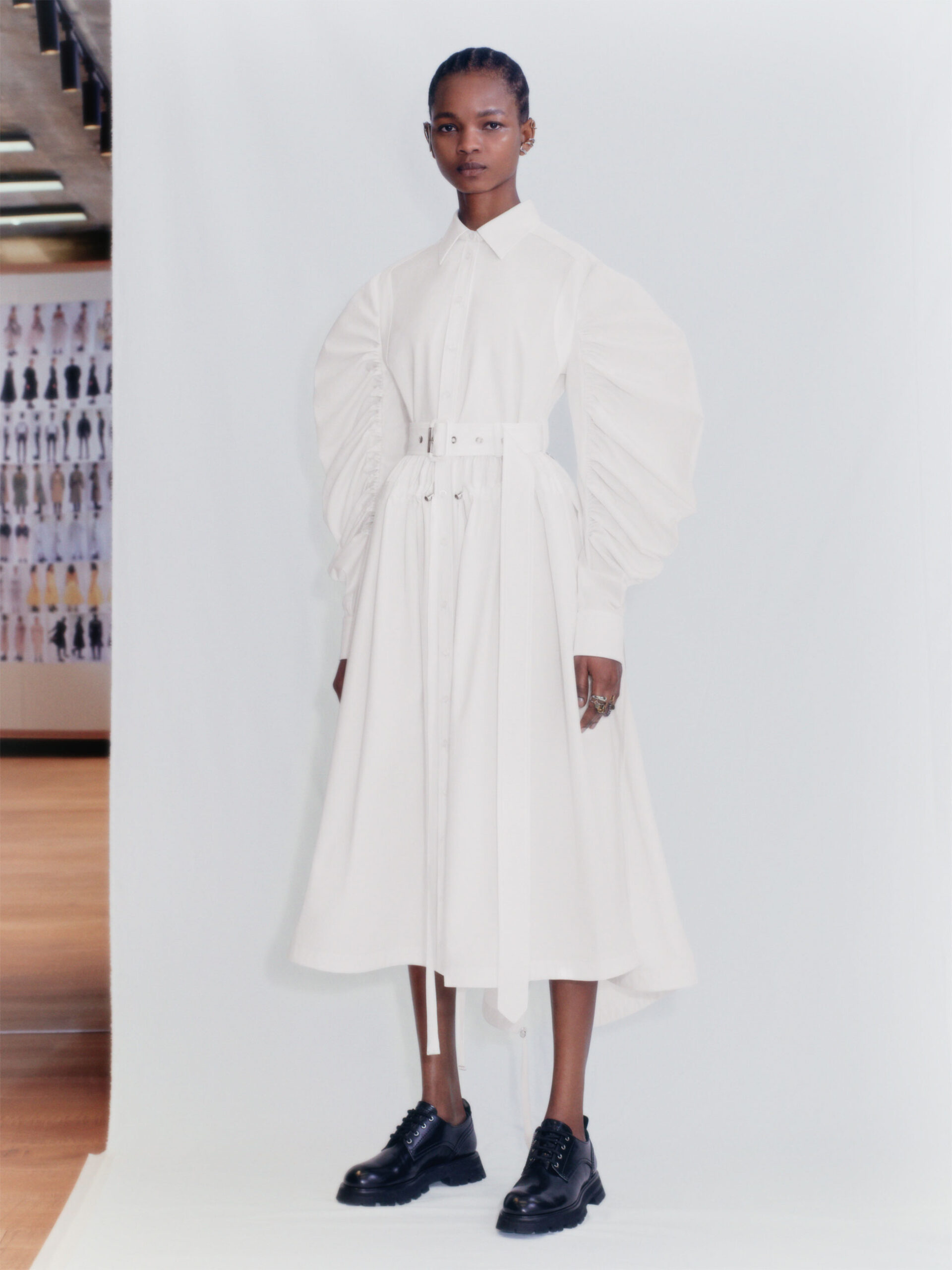 Striking two-tones are another subplot that will demand more detailed investigation into the collection – particularly the combination of the different fabrics and materials used to create those intriguing dichotomies.  So when a tailored, grey suit jacket with a wide, sky blue check suddenly gives way to solid black in a different material, it’s a twist on the norm that we’re here for.  Similarly with the unmistakably stark contrasts between the fused black leather and  blue denim in the jacket and pants look. 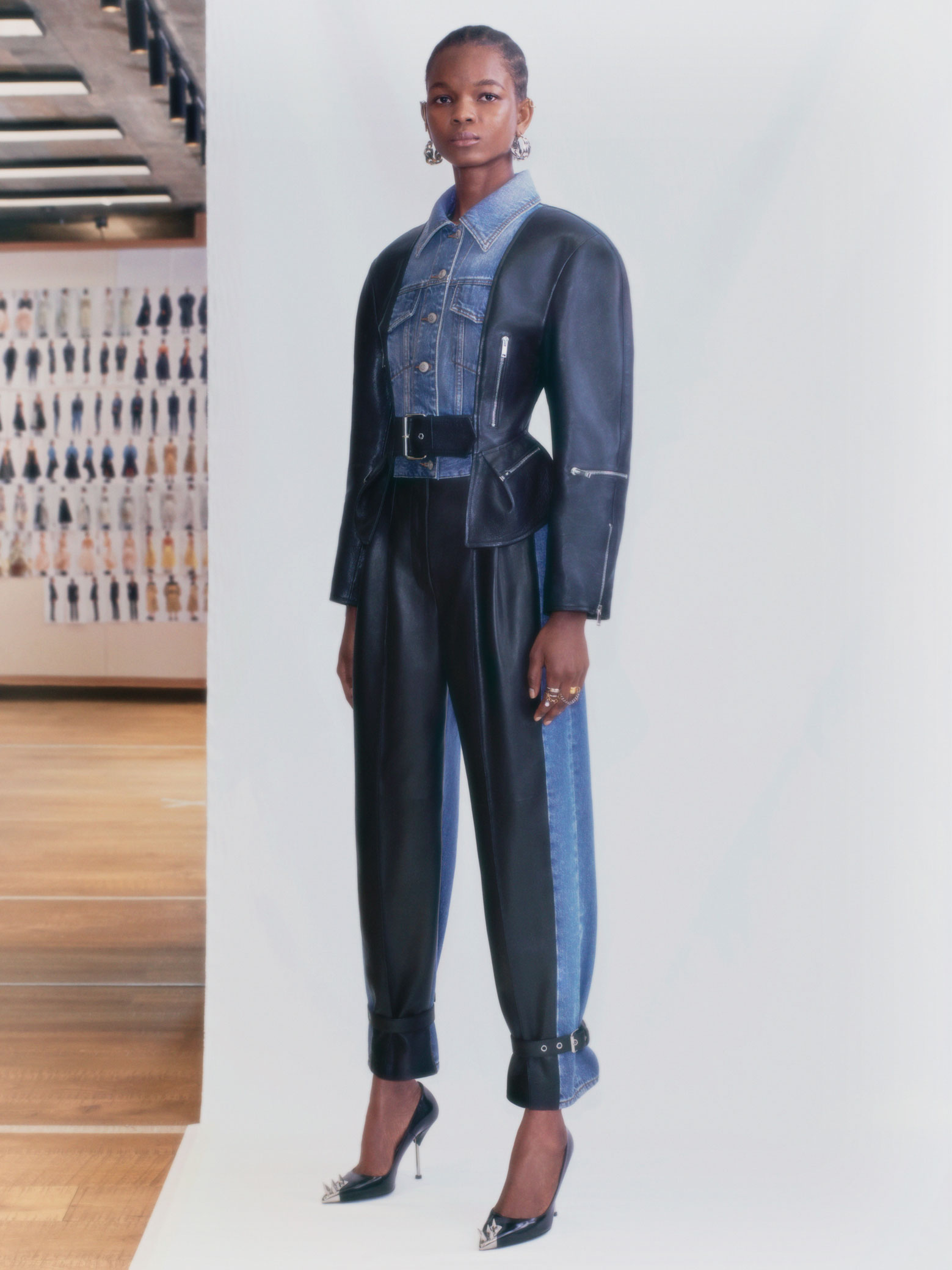 One of the other successes of the Sarah Burton era of the Alexander McQueen story has been her ability to combine strong modernity with delicate femininity.  The cut is always precise and the tailoring is always sharp at McQueen.  Yet that doesn’t preclude there being chapters grounded in fantasy and fairytales as well.   The black, lace shoulder-less, strap dress has the kind of romantic shape that wouldn’t look out of place at Cinderella’s ball.  The nude/pink ballerina’s dress, with the ultra feminine bodice and the layers upon layers of beautiful asymmetric ruffles in the skirt, wouldn’t raise any eyebrows if it was seen onstage during the Nutcracker Suite at Sadler’s Wells. 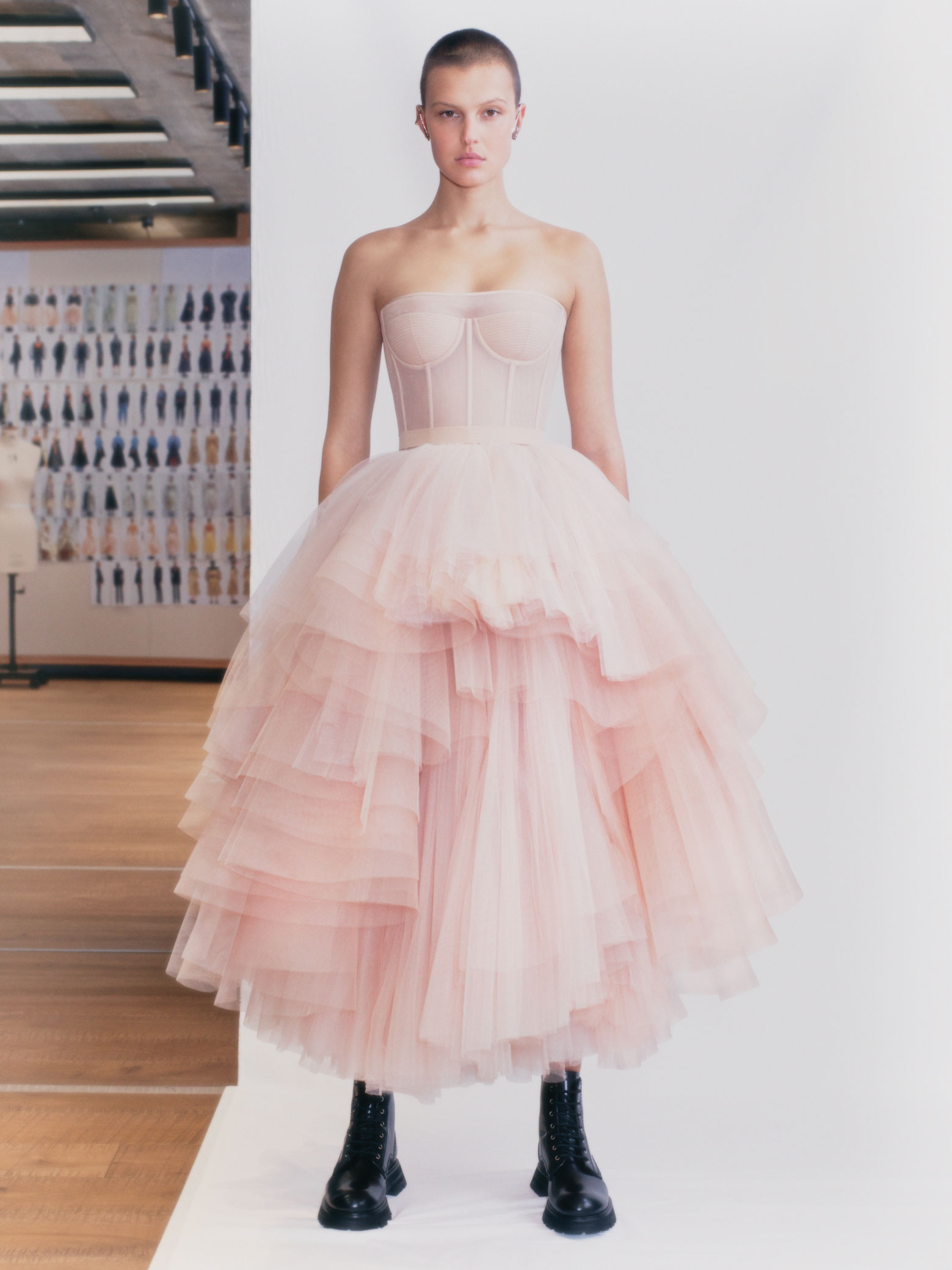 If there was an epilogue to this story it would have to be the silhouettes in the collection.  And this is where the innovation is most keenly seen.  There’s a certain innate architectural talent required to not only conceive of these shapes but also to construct them AND have them be comfortably wearable for the customer.  The blue denim jacket and dress combination is a perfect example of this.  It would be nigh-on impossible to accurately describe the shape of the jacket in any language, which should tell you just how talented and dedicated you’d have to be to get it from an idea in your head to a sketch on paper to a toile on a tailor’s dummy and then on to production.  In fact, unlike most stories, most of the silhouettes in the collection would be woefully underserved by written or spoken descriptions.  That’s when it becomes art and, like all art, seeing is when the believing happens. 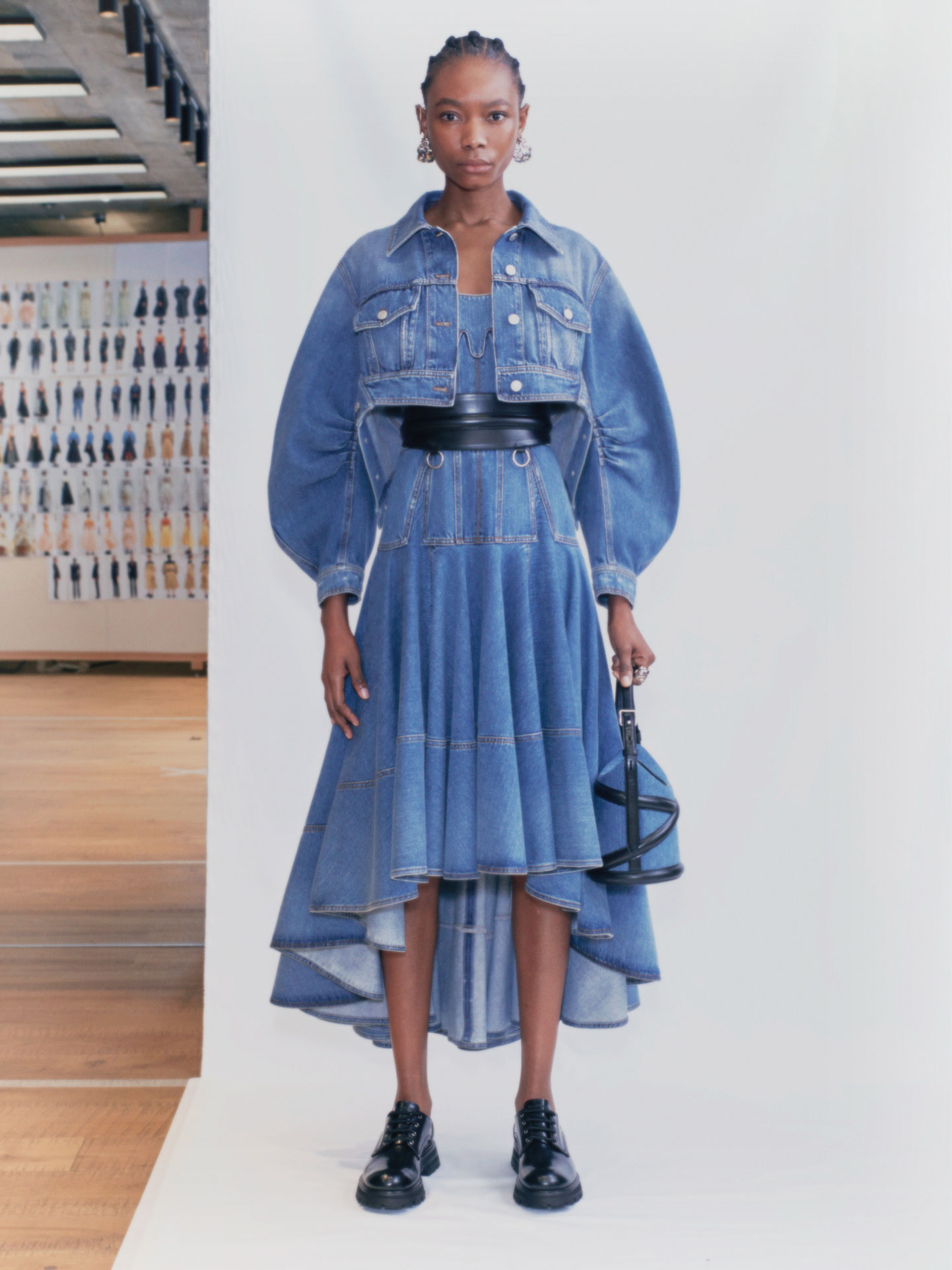 Click here to read our last feature on Alexander McQueen.