Abigail Jones, A Taste for Perfection 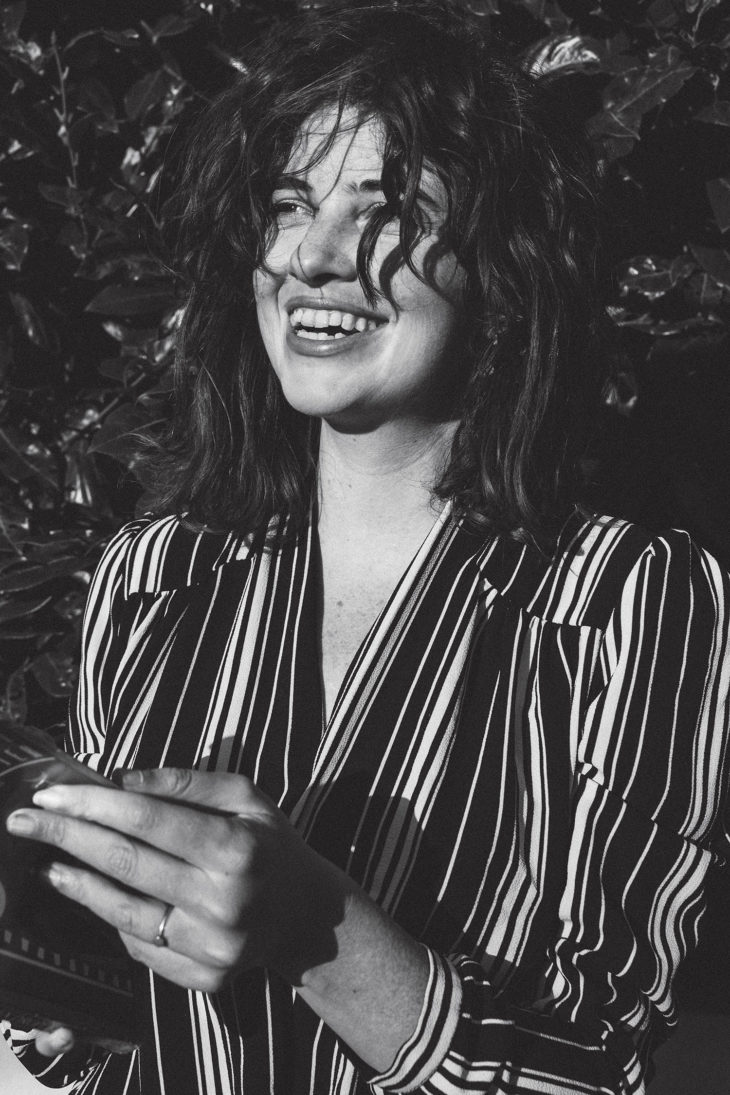 Abigail Jones, 30, has recorded much of the past nine years of her life in a series of autobiographical paintings, drawings and collages titled A Taste for Perfection. It’s a seductively illustrated diary of thoughts and observations, swinging from the personal and political and back again, and it’s funny. Brutally honest, but brutally funny.

You can subscribe to the ongoing series by following her Twitter account @A_T_F_P; a selection was also published in her monograph Ten Years of Fucking Mayhem, but it has since sold out and so is hard to find. Originally from Harare, Zimbabwe, Jones now lives in Stoke Newington, north-east London, works for a charity and makes art. She’s currently working on a series of large figurative paintings, rendered in a neoclassical style and a sombre, decadent palette, for a show this autumn at Neue Froth Kunsthalle, Brighton. 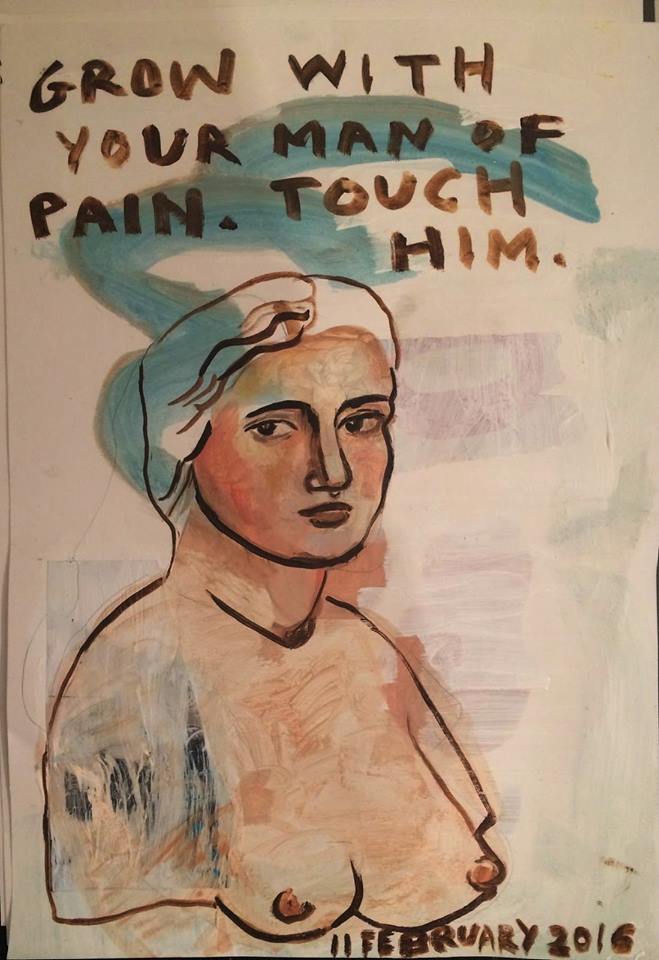 When did you first begin A Taste for Perfection?

I came across Charlotte Salomon’s series Leben? oder Theater? – Life? or Theatre? – in 2008, which comprises 700 or so beautiful, diaristic gouaches, made when Charlotte lived in exile from the Nazi administration. I loved its commitment and intimacy. A visual diary of a kind, A Taste For Perfection began just after reading Leben… and quickly became a part of my life.

Why the title A Taste for Perfection?

I read a collection of short stories by Guy Vanderhaeghe just before I started. In one of them, A Taste for Perfection, a man, Ogle, terminally ill, finds life in hospital boring and tiresome – he is, understandably, a crotchety grump. His young male nurse, David, helps him to acquire what he calls “a taste for perfection”. Learning to gain a taste for perfection is learning to anticipate delight – to alter one’s perception to expect it. This shift isn’t passive, but a sensuous, dynamic mode of rebellion. I like the idea of expecting to be enchanted, it’s a way to become so.

Have you ever got in trouble for using your friends and lovers, and the things they say and do, as material?

In the earlier ones, years back, when I was less self-policing and a little more impetuous, yes, I got into some trouble. I feel a bit dumb about having done that. No one wants to have something indiscreet they’ve done recorded on paper and then for that to be on the internet. 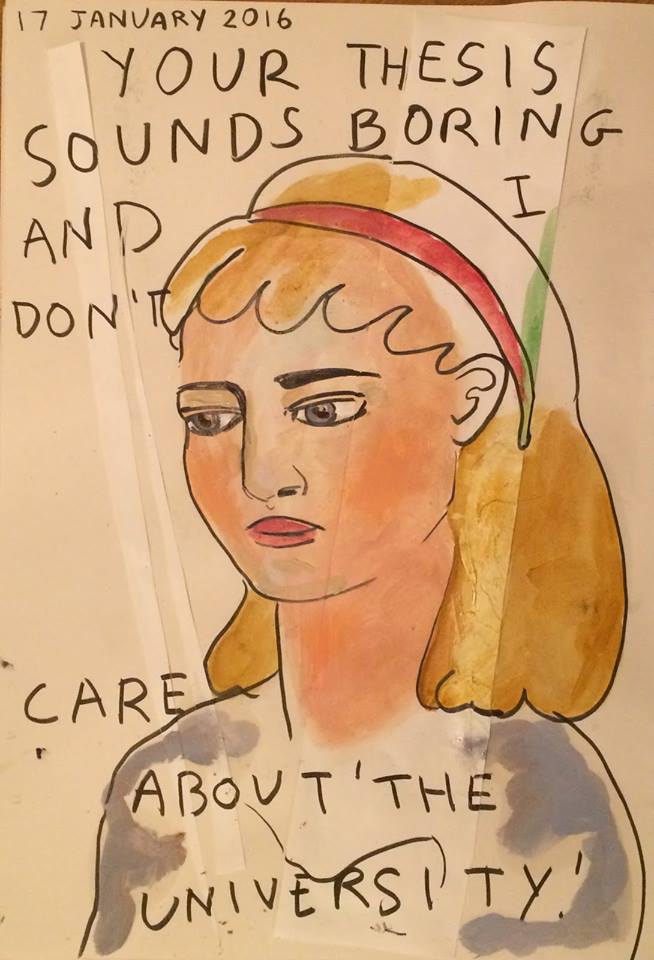 What’s the most important thing you’ve learned from working on one project for so long?

That a piece, when it becomes close, shapes you just as you shape it. I’ve been making this series for nine years and there are more than 700 pieces now. A Taste for Perfection has become almost like a relationship. I feel a commitment to it – it gives back when I nurture it, so I do. Sometimes, a friend will say to me, perfectly innocently, ‘I see you haven’t made an A Taste for Perfection for a while,’ and I feel a wave of guilt.

At what times do you tend to make these?

Overwhelmingly, late at night. Nighttime is the best for making things because the hours in it belong to fantasy somehow.

What is your day job?

I work as a researcher and public engagement officer at a science charity. 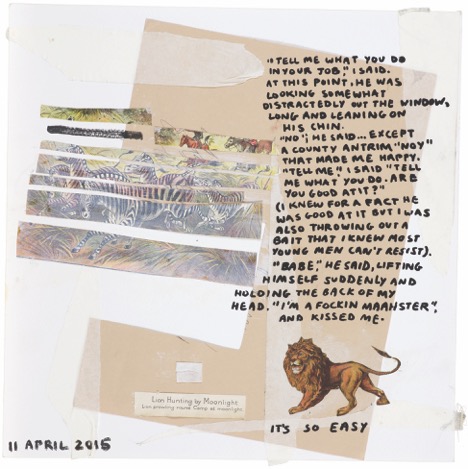 Is there an artist who has particularly influenced your approach?

Charlotte Salomon for the A Taste for Perfection series. In terms of other work I make, I’m pretty obsessed with Max Beckmann. He’s a nice reminder of how to be braver and more badass.

How do you see A Taste for Perfection looking in a decade?

In a decade, who knows? I do hope I’ve moved on slightly from drawing handsome Grecian men and clouds and butts and boobs, and have become a little cleaner in my lines, as well as more discerning in my text.

Do you have a favourite work from this series?

I’ve pretty consistently remained fond of 17 January 2016. When I made it, I was getting sick of the declarations of various Facebook peers who were doing PhDs in cultural disciplines, talking about their work and the “space of the university”. You can’t write under a friend’s post, ‘Your thesis sounds boring and I don’t care about “the university”,’ but you can make A Taste for Perfection about it, yes you can.