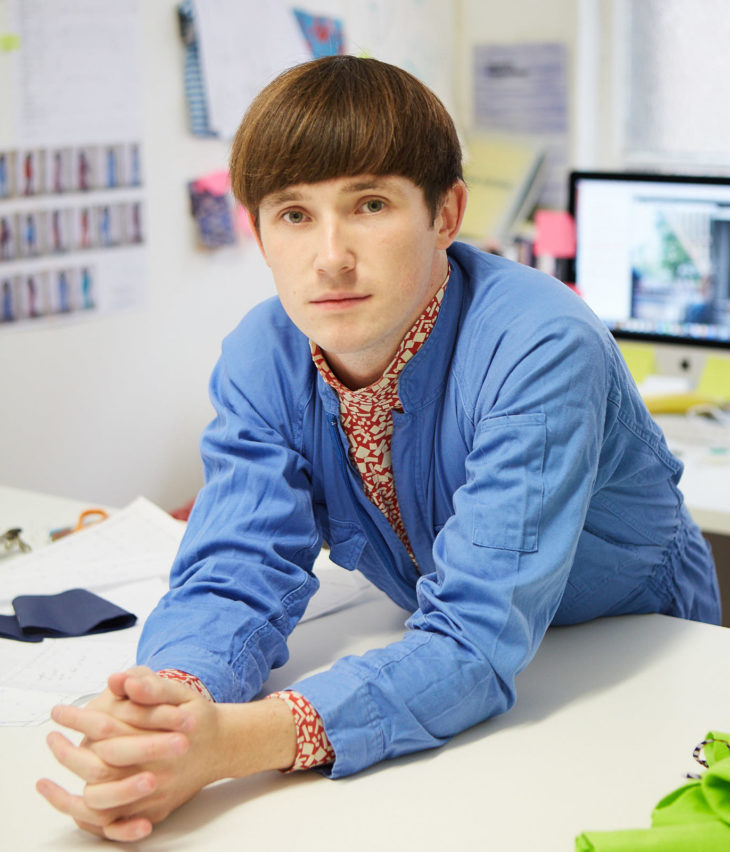 One of the most unassuming, yet high-achieving, of the current young designers working out of London right now, Richard Malone has more reason to blow his own trumpet than most and yet, admirably in this age of ruthless self-promotion, chooses an approach to his craft that appeals to a bygone age in fashion.

The focus is solely on the work, the creative process and the skill required to execute what comes from his imagination. And to appreciate Malone’s work – colourful, sculptural, uplifting – up close and in speaking to him – quietly determined, articulate, witty – is to come to the conclusion that in reality he is an artist who merely chooses clothes as the medium through which he chooses to create, something to be said for most of the very best of past generations.

We had the pleasure of visiting him recently in his north London studio to speak with him about his creative process and collaboration, working with conglomerate brands and the future of London’s fashion conveyor belt.

At what point in your formative years did you recognise the importance of clothing as having an impact on social expression, as opposed to just it’s artistically and functionally? What was the stimulus for you that altered your way of thinking?

I think when I started doing sculpture. I grew up around clothes with regards to functionality because my Dad was a painter and decorator. I think you see it more as an expression within working class environments, there’s a lot of gang-making and cliques, which I think is really inspiring, people feeding off each other. People look at working class environments [with regards to fashion] as some kind of novelty, appropriating streetwear without realising that there are codes.

Before I started at St. Martin’s I was always making things that weren’t clothes, they were more performative things made from plastics or building materials. They were more of a response to not having anything, making stuff that you have easy access to… In terms of form, I’ve always been drawn to the abstract and a lot of the times I start with these huge drawings and put them on the body, almost as an afterthought – that’s how the sculptured look comes about, the coats especially come about from something that quite abstract. I just find it more satisfying to work like.

I’m interested to know about the collaborative aspect to being a designer, it’s perhaps easy for outsiders looking in to consider the designer as purely a sole, isolated creative.  How much is the creative process for you one of collaboration and how does this manifest itself, if there is?

Yeah, definitely there is. I don’t know anything about the production of fabrics, for example, so if I want to make a certain kind of fabric I need to find someone to do that. The hand-woven fabrics really is a collaboration between me and a society of weavers in the south of India. I can design but the discussion needs to be had about how it can actually be made. With the sculptured work I do that very much isolated on my own. There’s a process I go through when starting a collection where I work solely on my own just making shapes. You have to just let yourself go. I feel like you have all the knowledge you need to make what you want to make. I don’t go off researching what’s going to happen in fashion or the twenty year cycle or whatever. I just start with a form, where’s it a lot more sculptural, then I sort of chain it into the body.

The business was kind of built on collaboration. I started working with private clients, some commissions for people I really respected – actresses and art collectors – and I think the conversations you have with them are really important. Seeing that a women actually buys the clothes… That was how I started before I even showed at fashion week, straight off the bat I started doing private clients. You get a lot more understanding of how free you can be. What a lot of luxury brands are aiming for they’re missing completely because they don’t really know what a woman wants to wear. You know, women who have that much money are probably around 40 to 50 and have been buying and appreciating fashion for a number of years so they really understand cutting. That’s where I put a lot of my emphasis, so we can have really interesting conversations. Also, seeing it on a person changes your perspective because the end-game changes a bit. It’s always satisfying to know that someone will wear something they really appreciate.

There remains, of course, the sole creative aspect to the work – how do you go about initiating this part of the process? What is the beginning of a new project like for you?

It is quite isolated because when you’re doing something that’s physical involving shape or form you can’t really articulate what it’s going to be. I don’t really use reference images or fashion reference images – again I never saw them growing up so I don’t really see them as being relevant to making something that I think is new… There just isn’t a way if articulating something unless it’s through a sketch and the sketches that I do aren’t fashion illustrations – they’re just drawings, shapes or painting with colours, all different kinds of creative trials. A lot of my upbringing really informed what I do now but also at St.Martin’s a really learned my skills there. So I can do tailoring and pattern cutting and I think that’s what really differentiates clothes, if someone’s hand is actually involved in making them as apposed to you just doing a sketch, giving it to someone to make and then through every part of the process it becomes something different. I’m a complete control freak, so… Most of the samples for the show are made here [in studio] by me.

How important to you to be working to some kind of agenda when you create, a sense of purpose behind the creativity, and have did you come to study fashion with a philosophy of how you’d like to work?

Definitely, I never really saw fashion as just collections or making a collection. There’s so much more that goes into it that people don’t see. All of my friendship group and people I’m surrounded by are artists, I always thought that’s how fashion designers worked. What fashion is now is different to the idea that I had of it. I thought it would be a lot more creative but actually, it’s quite restrictive, especially when you’re working for the big companies.

How has your experience of working with bigger brands influenced your own working methods, both in the creative and commercial sense?

It’s completely different. To me it’s not fashion, it’s product design and I think the majority of fashion now has so much information about people before they even start selling, it’s almost like an algorithm. You can look at a lot of collection and see how they feed into one.  A lot of comes down to speed because the speed you work at in places like those is bizarre. It doesn’t make for the best product or the best fashion show. It’s gone so far away from what fashion used to be. It feels more like marketing to me and that’s not something I’m interested in.

For all the positive elements there are to working in London for a fashion creative, do you think there’s element that is potentially unsustainable and exploitative for younger generations coming through?

Sometimes it is a bit like a system. At the end of the day in London, there’s a group of people deciding upon things and there are so many fashion graduates every year, everyone thinks they can do it… But realistically you can’t, it’s only a handful that does. And you have to be willing to take a certain amount of pressure straight away. There aren’t many professions where you’re scrutinised to such a grand scale. It can be quite intimidating to be reviewed alongside Prada, it’s so weird. In London, we do have great support, in Ireland you definitely don’t, even in France and America, but it is all quite homogenized. A lot of people in it are quite privileged or connected in some way. That’s a problem with art education here, the price is so high you have to be rich, If I was a year later I just wouldn’t have been able to afford it. Nine grand a year is just so fucking way!

Do you though feel part of a generation that is heralding new working and thinking practices in an industry that hasn’t always had the best reputation with regards to representation, body/size issues, ethical resourcing issues, etc.

I think so. Things are a little more transparent now so you can see through the bullshit a bit easier and also as a generation of designer we’re a lot more supportive of each other. Customers, also, don’t always want to buy from the big brands – people are starting to think about ethical issues now which can only be good.

Do you feel confident being able to sustain a career here, be able to achieve what you want creatively and outside that?

I think so… I worry now because of fees going up and only wealthy people having access to that kind of education but also think there’s a great deal or hunger [to achieve] out there.  A lot of people are saying no to the bigger brands now – you either are that kind of designer or you’re not and people are feeling forced to be something they’re not. It comes down to what kind of life you want as well… I mean, could you be bothered?!

And is your plan to continue working as you are?

Yes, stay as independent as possible. It’s the only way you can sustain some kind of voice.  Having too many people on board only clogs up the message. 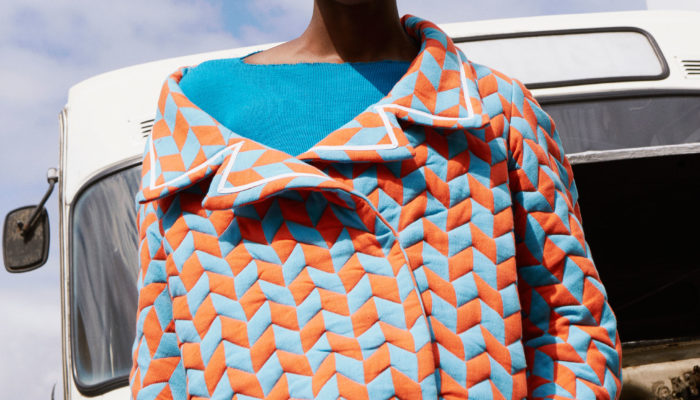 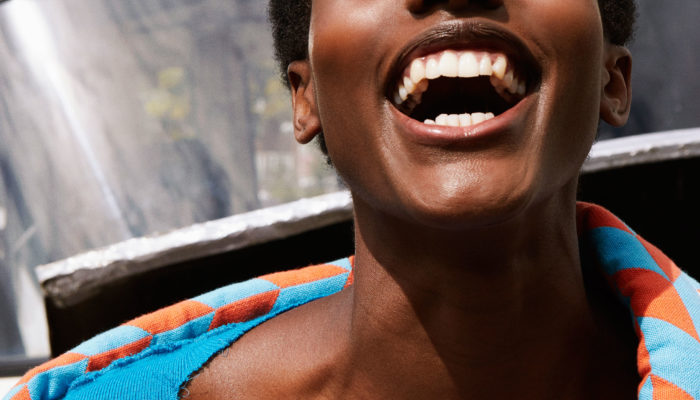 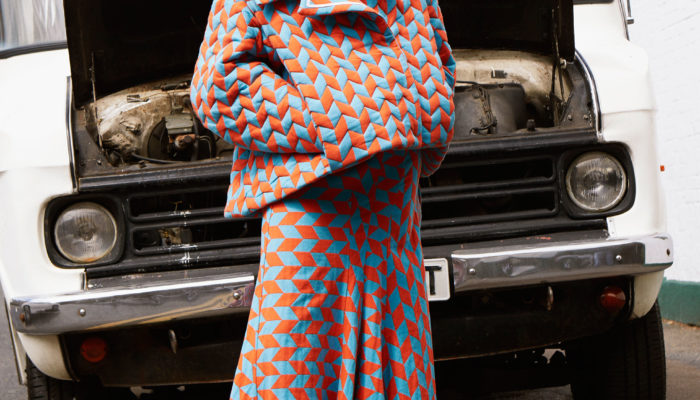 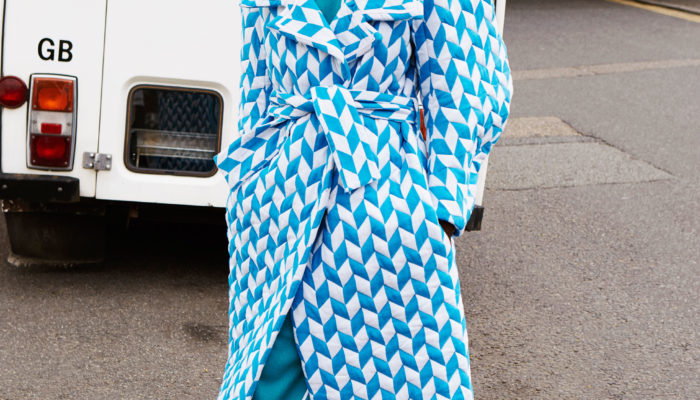 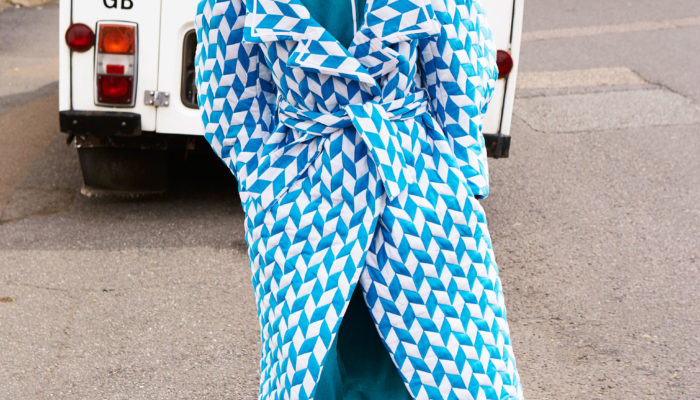 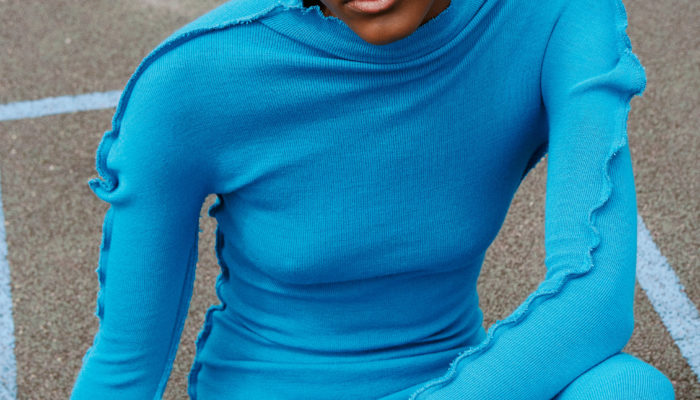 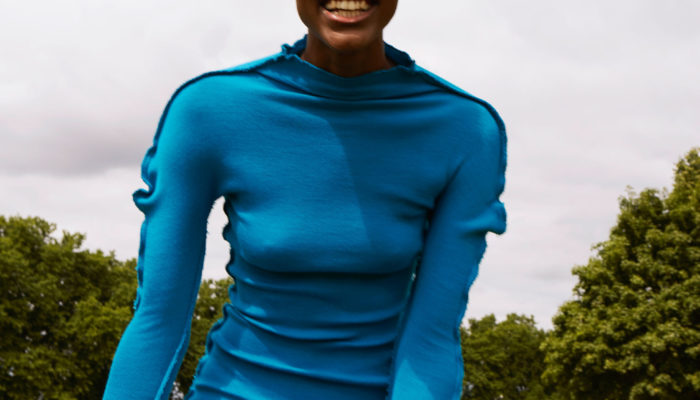