Miuccia and Raf combine again for the best of both worlds

There was a Salt ‘n’ Pepa song a couple of decades ago that really opened up a global conversation.  But, once we’ve finished talking about sex, we really should start talk about clothes.  Specifically, the clothes designed by Raf and Miuccia that graced the catwalk for the Prada menswear AW23 collection at Milan Fashion Week.  Let’s Talk About Clothes was the title of the new offering and, given what we all saw, it would be really, really rude not to. 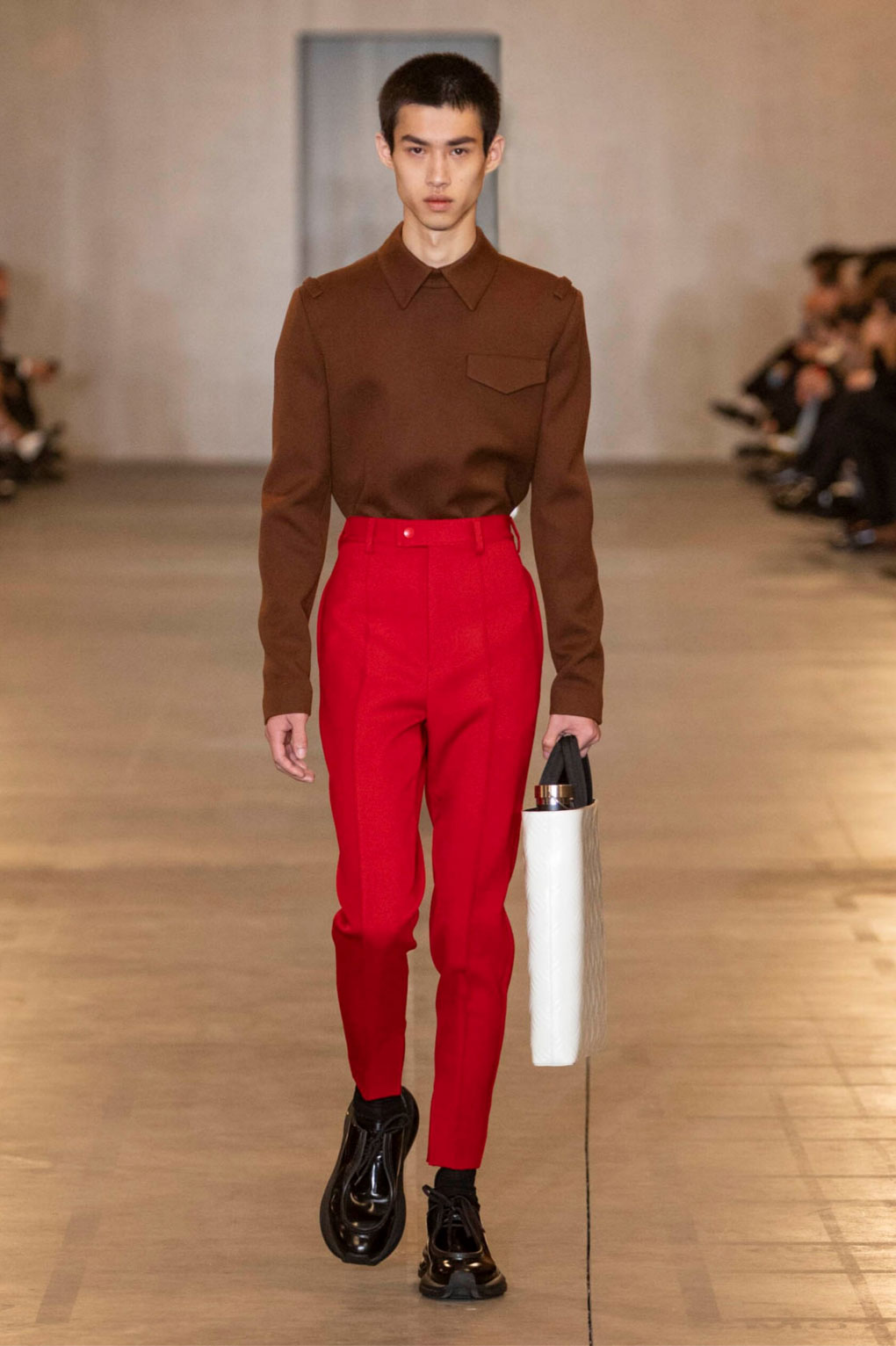 The show took place in a stripped back and spartan Fondazione space that seemingly allowed the designs to ‘bounce’ of the walls and ceilings with no impediment.  All the better for the eyes to soak in the clean, stark and beautiful silhouettes that bounced past, then.  We all already love that unique Prada aesthetic – the razor-sharp cuts seen through that instantly recognisable utilitarian prism.  But we’re always still left you wondering how they’re able produce collections that seem ostensibly the same season after season, yet are also so very, pleasingly different to each other. 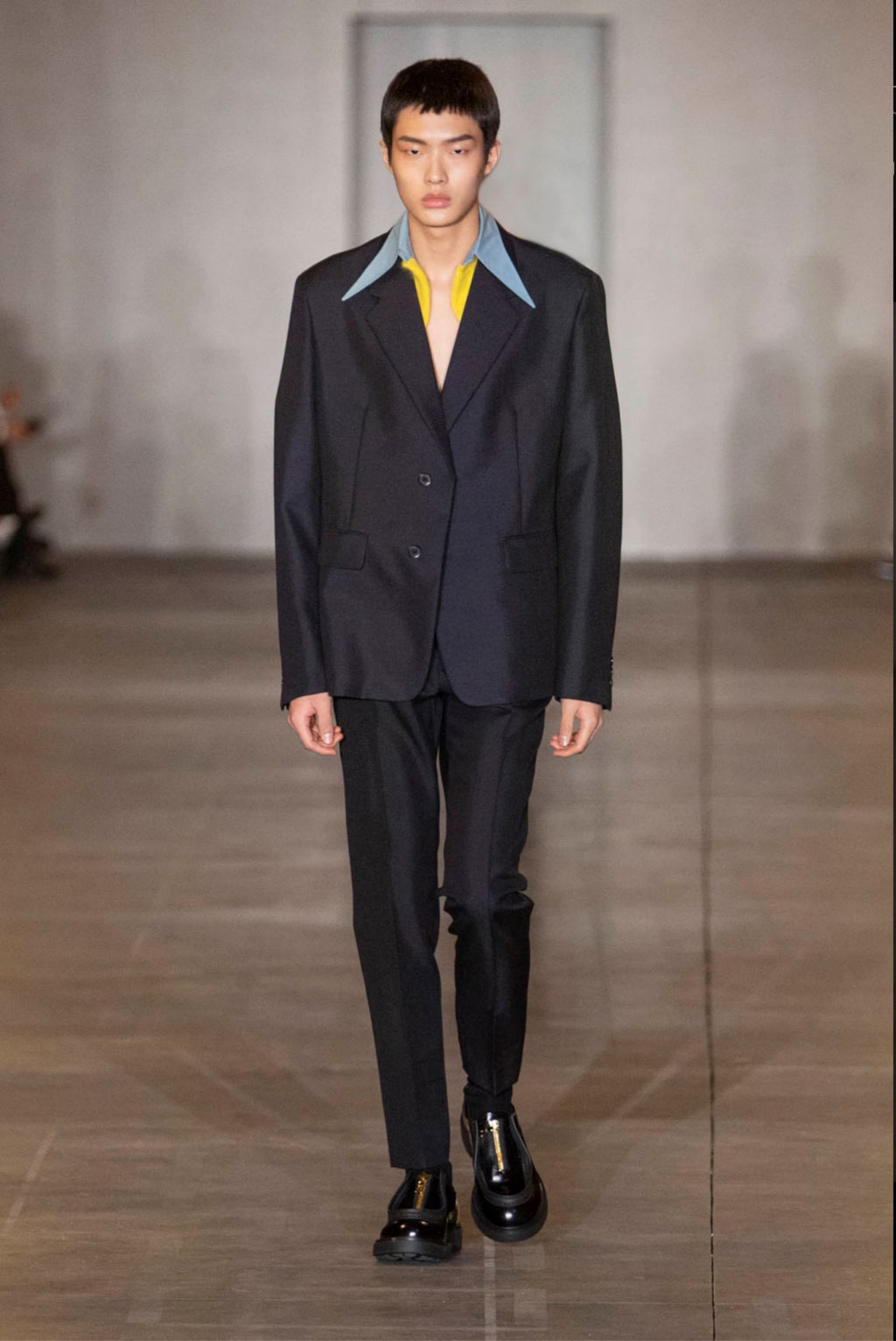 Of course, the supreme tailoring was there.  But this time the silhouettes were slim cut trousers combined with boxy single-breasted jackets.  The twist came with the slim-yet-overlong detachable point collars in a multitude of colour blocks worn over the jacket lapels – an immediate conversation starter.  More excited dialogue was to be had with the improbably fetching, giant, collarless MA-1 bomber jackets in white, navy and the traditional army green.  With the hands in the pockets the shape seen was almost spherical, and teamed with those slim trousers, the effect was almost lollipop-like.  Who wouldn’t smile? 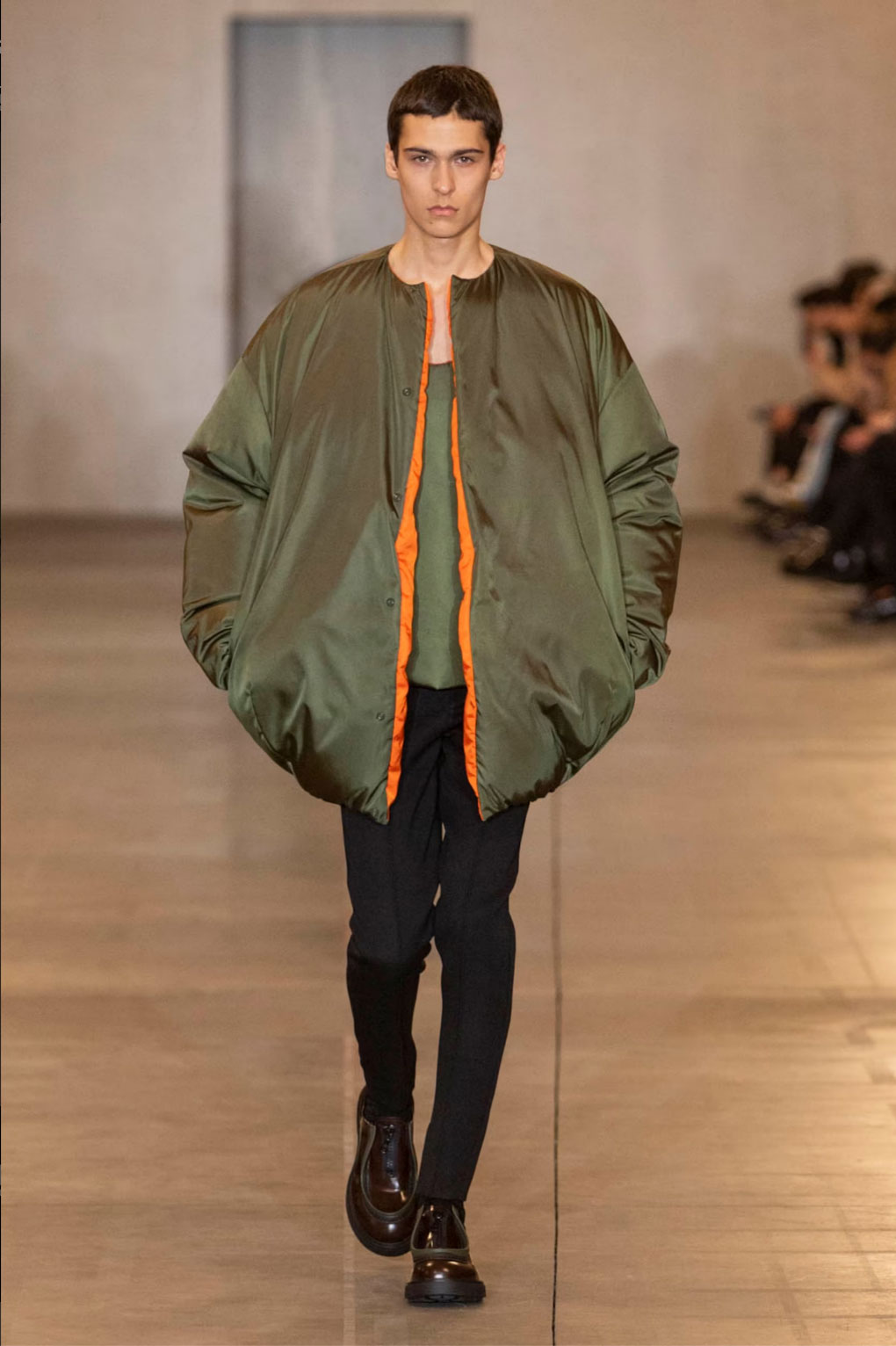 Long over and under shirts with both high and low necks fed the new world desire for bold and brash boundary-pushing stories.  Knee-length and worn either under long jackets or as separate pieces, they were dresses in all but name.  They could literally be worn as dresses.  But in the hands of these two fabulous artisans they look singularly made for the male form.  At the very least, this is a debate all will love having in the very near future. 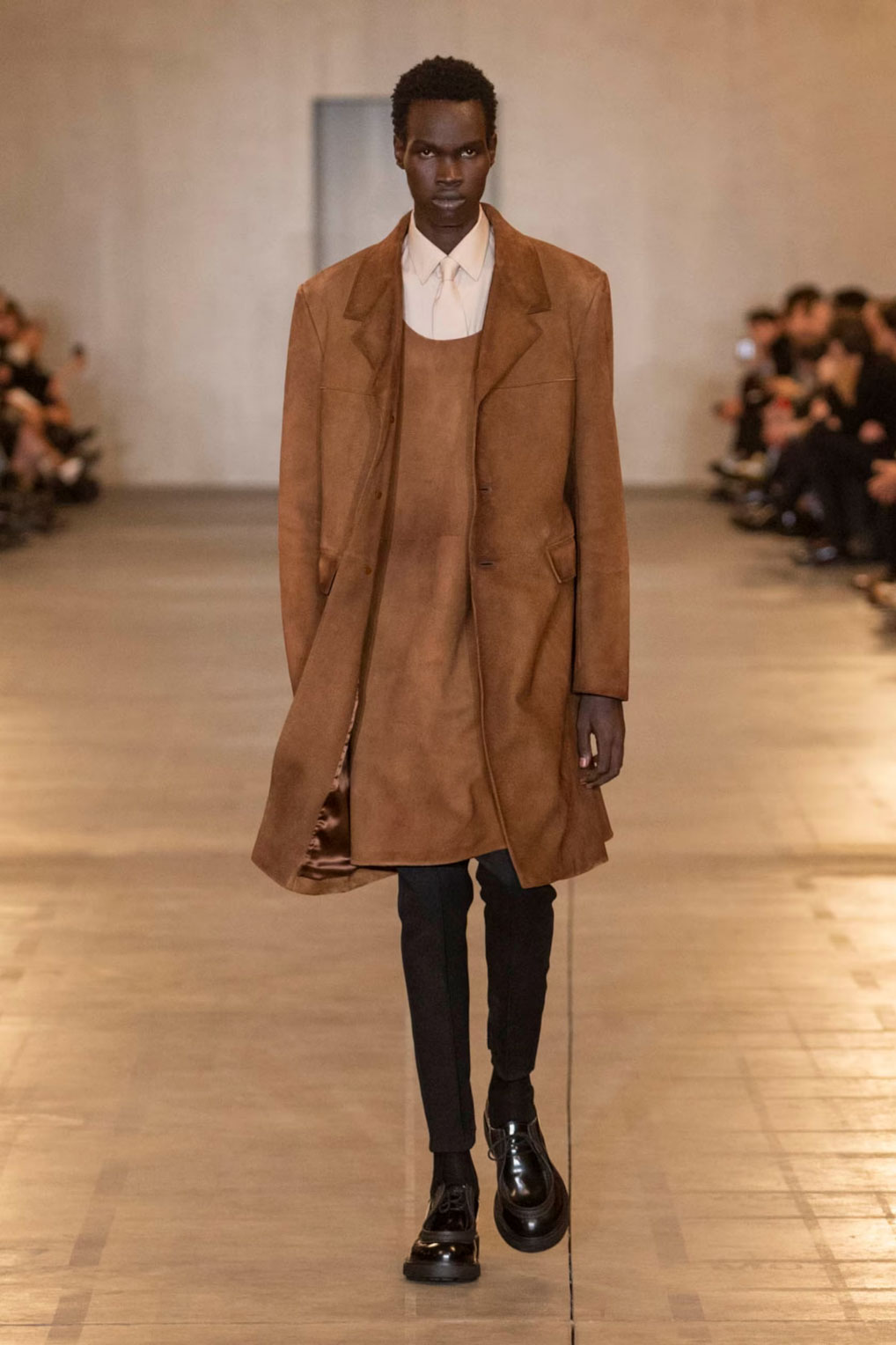 Not to be forgotten, there were also the frequent pops of vibrant colours beyond the aforementioned detachable collars to keep things compelling.  Electric green and cherry red drainpipe trousers set off the muted tops they were paired with.  Tailored jackets and coats featured graphic panelling along the sleeves and down the sides in red, yellow and green.  All of which ensured that between now and the day Prada AW23 hits retail, there will only be very few moments we won’t be talking about it. 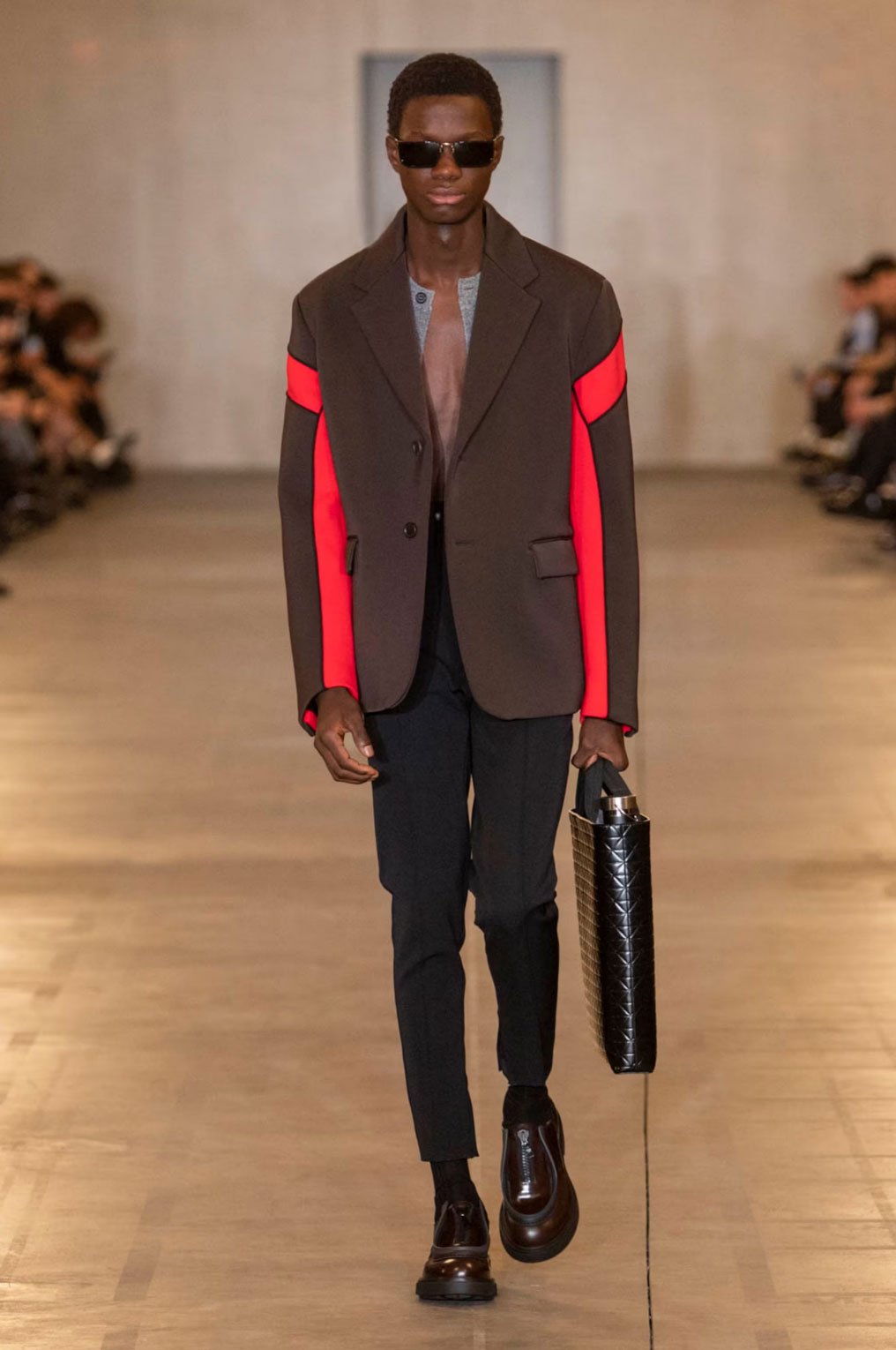 To read the review of the Fendi mens AW23 show, click here