Coolness at its peak at Nigo's debut for Kenzo. By Giovanna Pisacane 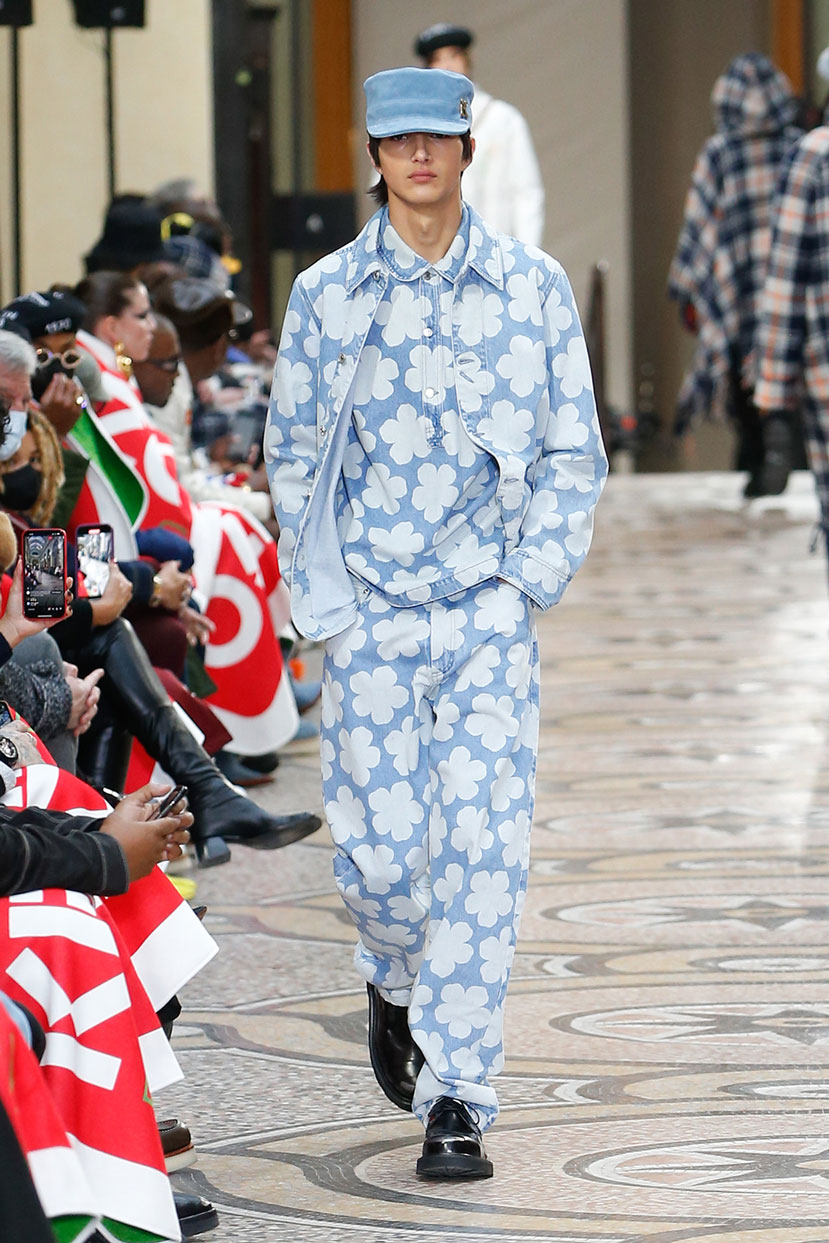 Nigo is probably best known for founding the streetwear brand A Bathing Ape and, more recently, for his collaboration with the late Virgil Abloh for Louis Vuitton’s Pre-Spring 2022 menswear capsule collection.  And the fashion week crowd – including Kanye West and Julia Fox, Pharell, Tyler The Creator, Pusha T and J Balvin, to mention a few – all welcomed the multi-talented creative the party. 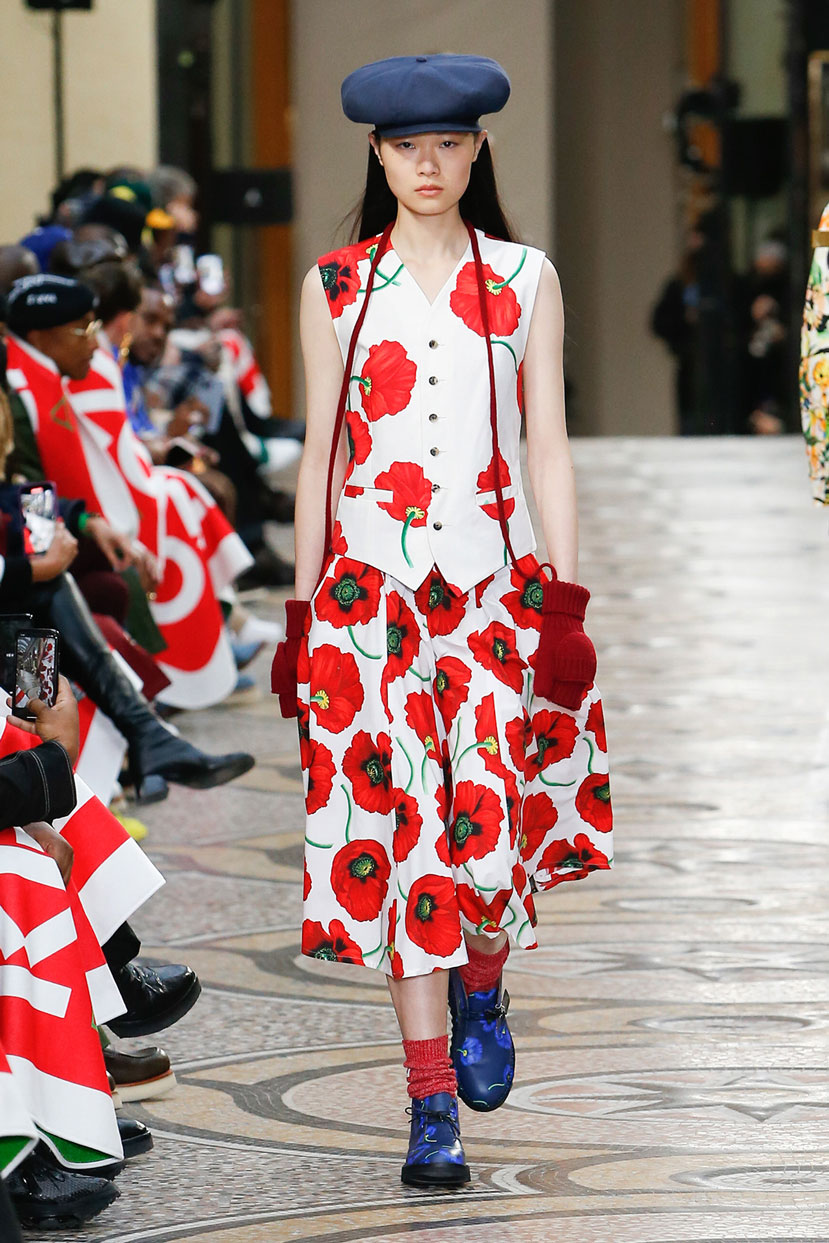 Presented at the Galerie Vivienne — where Kenzo Takada himself debuted his first fashion show back in 1970 – Nigo’s new collection presented a way for Kenzo and LVMH to fully explore underground-gone-mainstream subcultures.  Through his Billionaire Boys Club clothing line launched in 2003 with Pharrell Williams, and Human Made released alongside Sk8thing in 2010, Nigo has already paved the way as an inspiration to a whole new generation of streetwear designers and brands.  His ability to tap into the zeitgeist of those younger generations was no secret, and his first fashion show for Kenzo was the epitome of coolness. 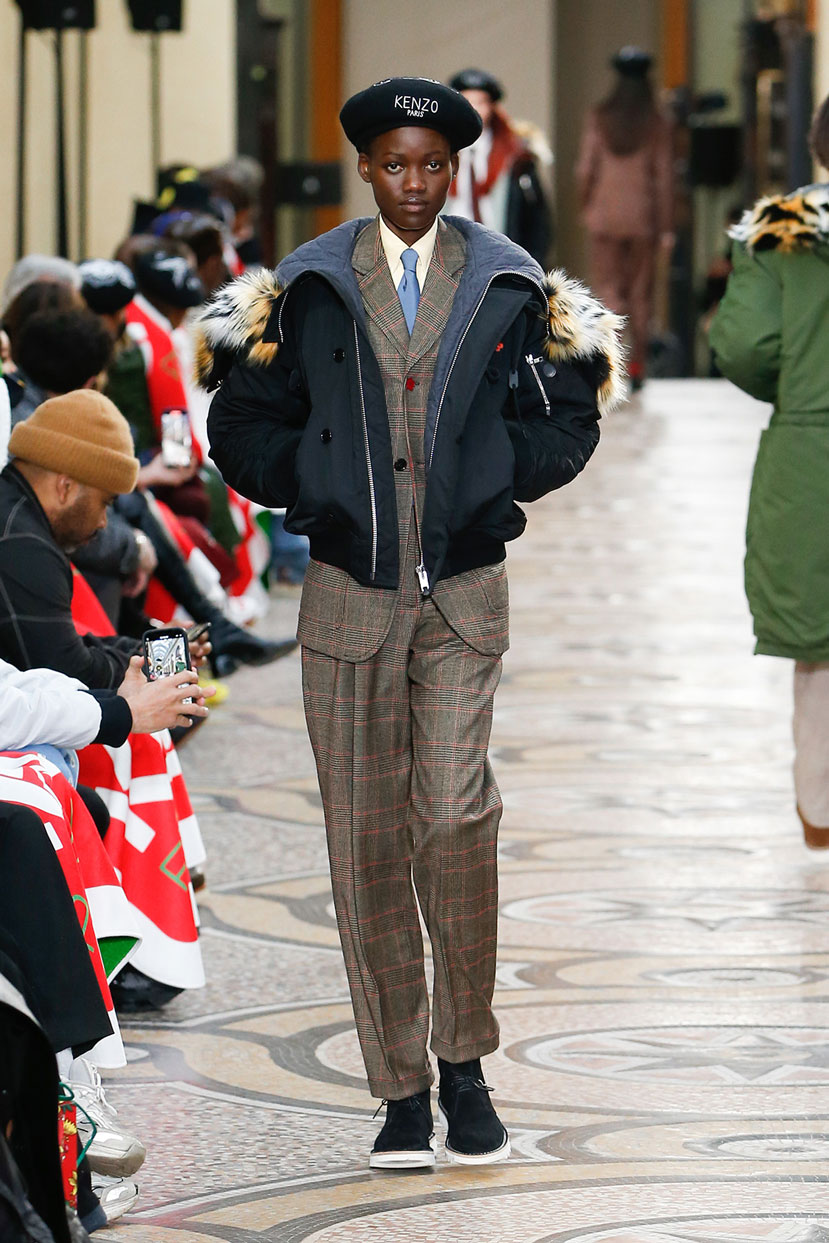 The designer expanded on Takada’s work of melding Japanese and Westerns cultures on the catwalk: reversible bomber jackets (inspired by those historically commissioned by occupying US-forces in Japan) in kimono fabrics, and embroidered on the wool side with a map of France and on the silk side with a map of Japan; nylon aviation jackets lined in shearling continued the military theme; whilst varsity and graduation jackets hinted at an Ivy-League Americana – covered in prints of Kenzo Takada’s original sketches to frame them in a distinctly Japanese style. 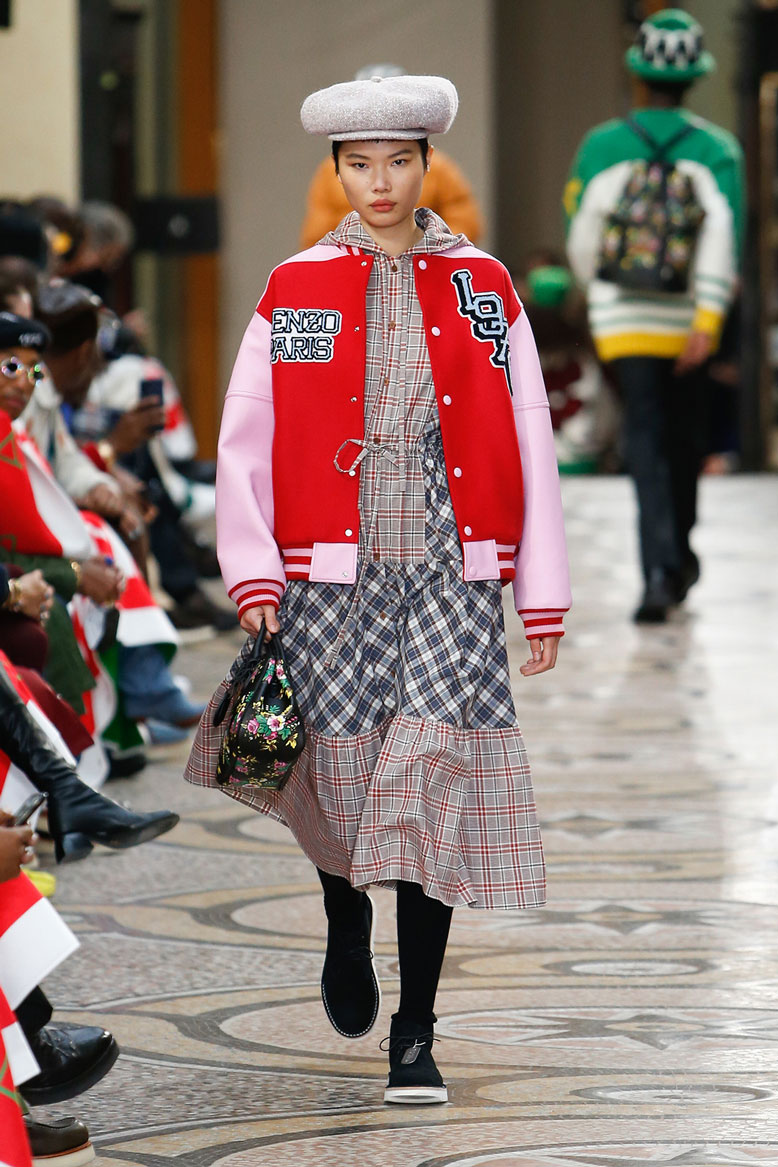 With other looks, Prince of Wales checks and pinstripes are interpreted in washed wools. Three-button jackets entered into a dialogue with Nigo’s affinity for the subversive sartorialism of British subcultures – also revived in 1980s’ Japan – and was further echoed in mid-length Harris Tweed coats and checked biker jackets.  Girls and boys were fully accessorised with reversible cross body pouches, pebbled leather top-handle purses, duffles, oversized berets emblazoned with 1970, and chunky-knit beanies – reflecting the style of the uber-fashionable VIPs watching from the front row. 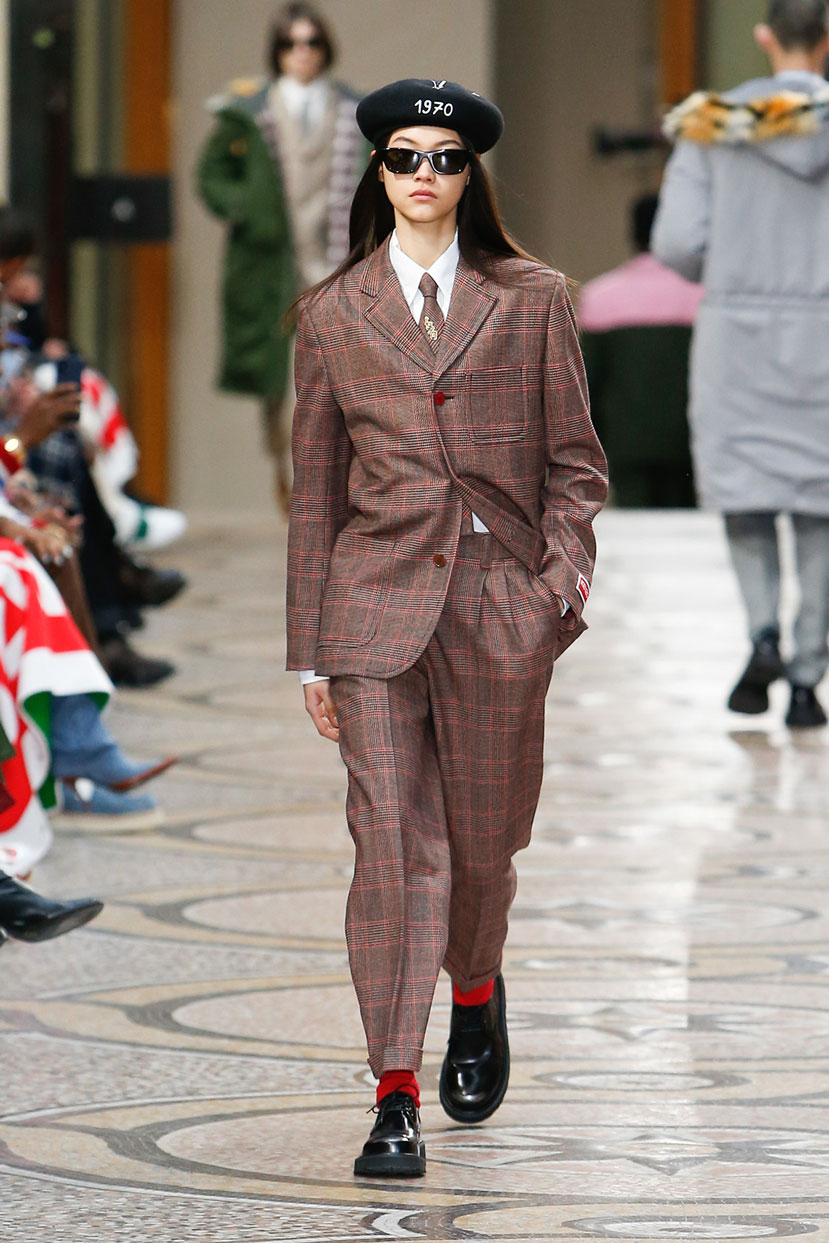 The colourful runway even thrummed to the sound of previewed songs from the designer’s newly-announced album, I Know Nigo (including collaborations with some of the stars in attendance), due out on March 25th – with the first single already out.  All of which should really be enough to know, Nigo’s reign at Kenzo is definitely going to be one to watch. 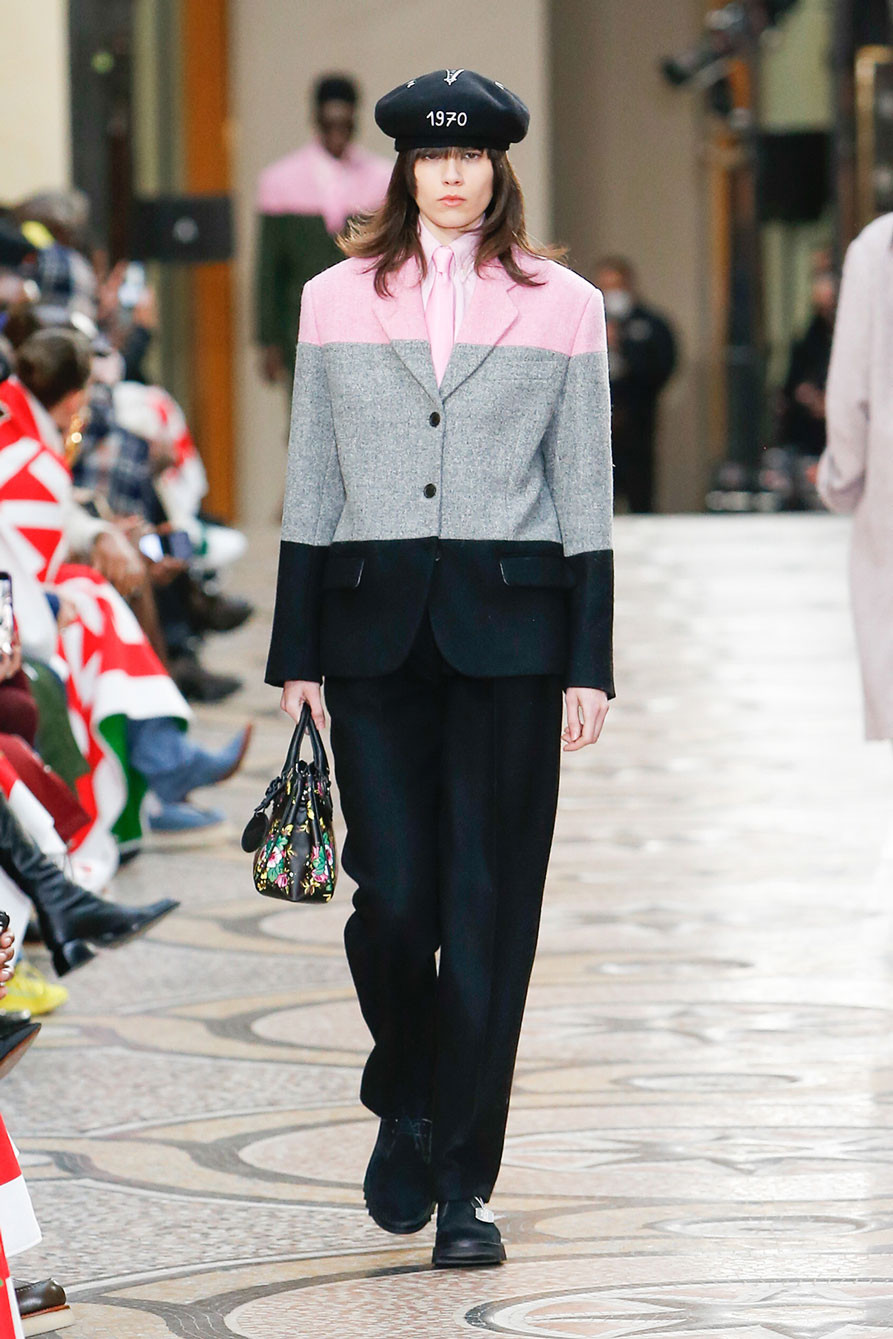