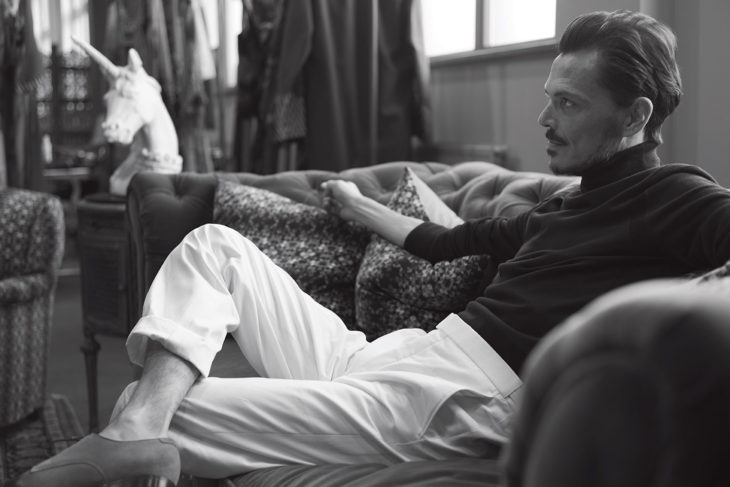 He studied with McQueen and Galliano, had La Moss on the catwalk at his first show and for 20 years has designed beautiful pieces that are about getting women noticed. Just don't ask Matthew Williamson to step into the spotlight himself.

Our lensman looks entranced by the pixie-like, green-eyed designer “giving him face” inside a butterfly print-upholstered studio. So entranced that he can’t see past the locked French windows to his colleague fluttering around outside like a dying moth in the November London chill. But then it’s easy to lose sight of each other in fashion, what with set backdrops, giantess models and sitting behind some creature wearing a top hat on the front row at a Matthew Williamson show.

The mind flits back to that collection: its opening look, identical twins swishing down the catwalk in violet satin, lamé-belted smocks, accompanied inexplicably by a seven-piece band, before Prince, still in velvet topper, jumped from his front-row perch to perform the most strutting curtain-raiser to a defile ever. And yet here we are, in this “design-hub” hell of grim Victoriana: serried, sloping roofs, gravelly goods yards and towering chimney stacks. Cotton mills look like this in Manchester, Williamson’s birthplace, and in Mumbai, the inspiration for his first show in 1997. Traditional, gritty places that produce swirling paisleys, vivid florals, indigo batiks and, very occasionally, hard-grafting visionaries. Twenty years is a long time in fashion. Picture the bright hues and inventive prints that define the “London look” of today, and you’ll see why Anna Wintour calls Williamson the heir to “concept-chic” revolutionaries such as Zandra Rhodes and Celia Birtwell.

In a campaign ad for his H&M collaboration Williamson is shown emerging from an asteroid crater, Ziggy Stardust-like, surrounded by a kaleidoscope of brightly wrapped supermodels. My entrance to his studio is less dramatic, an assistant admitting me through a side door into a psychedelic bazaar of spiralling, zigzagging, florid fabrics. “Colin McDowell was looking at my colouring book after my first few seasons and said, ‘He’s made it OK for British designers to do patterns again,’” says Williamson, beckoning me to a sofa as I think back with only mildly dulled anxiety to the indulgent colour-blocking or zhooshed-up grunge of the late 1990s. What got him out of Manchester? What inspired him?

“First of all, my mum. I grew up in quite a grey town and didn’t really feel at one with the environment, and so I saw in her – a receptionist at chic opticians – a beacon of all the things I wanted to be and do. She was like this firefly of energy and colour, so a lot of what I’ve done is because of her.”

Williamson attended the local Catholic comprehensive, where he was “keen to bring colour into my life with art or textiles because, around me, there wasn’t any. I loved Gustav Klimt, that art-nouveau period of decorative arts, the pre-Raphaelites. I was fascinated by the romantic painters, the otherworldly painters. I knew I needed to put a lot of work into getting out. I just wasn’t happy where I was.”

“I never thought I was really good enough to be a painter. I didn’t understand how to turn that into a job. What was clearer to me was how I could create clothes”

If the turquoises of Painted Ladies and the greens of Goliath Birdwings of the studio’s own-brand wallpaper illustrate Williamson’s adeptness as a colourist and show his wanderlust, his black and white sketches for his next collection demonstrate his draughtsmanship. “I never thought I was really good enough to be a painter. I didn’t understand how to turn that into a job. What was clearer to me was how I could create clothes,” he says modestly. “I know what my strengths and weaknesses are. I can’t cut a pattern in the next hour to a new silhouette that will change the face of fashion. I can’t do it. I know my colours.” And so we have the diverse, contrasting palettes of India, intricate Mesoamerican beading and Moroccan geometric patterns.

“It’s bohemian expression. I’m always going back to parts of the world that are rich in tones and craftsmanship. I’m always trying to put that in my work for the sense of escapism, and that can be as much as a girl going to an event in a colourful gown and feeling that all eyes are on her. I’ve always wanted my clothes to be talked about — they are not wallflower clothes.” 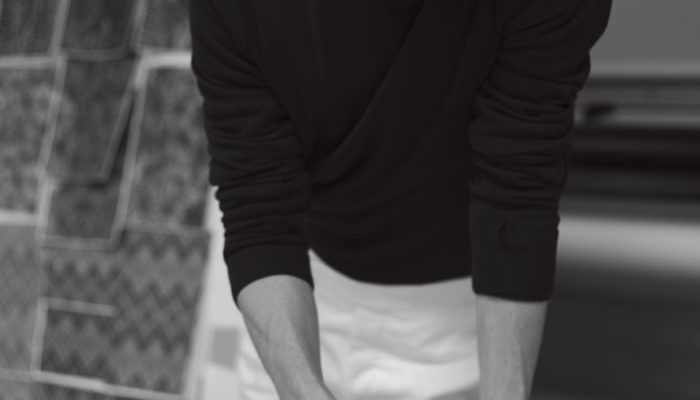 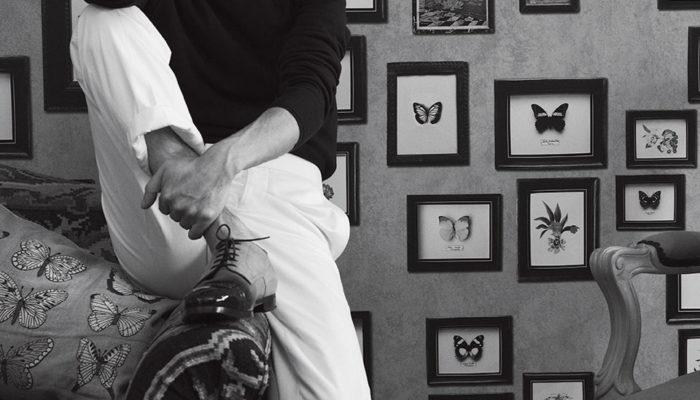 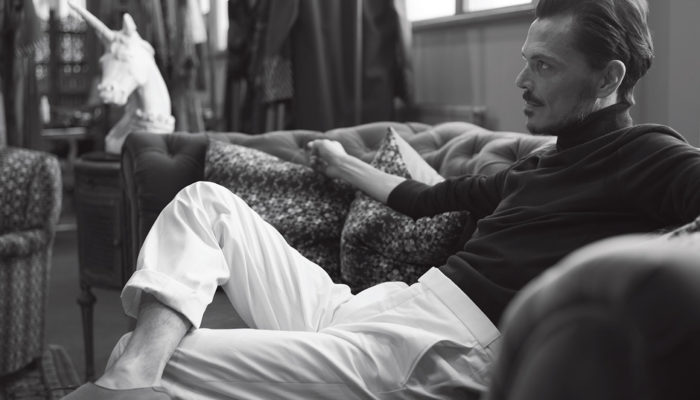 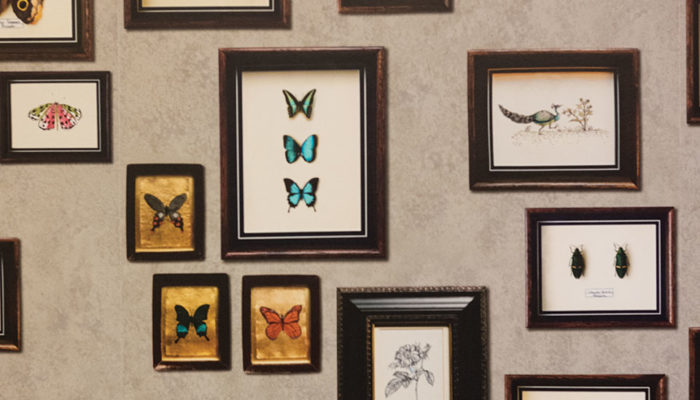 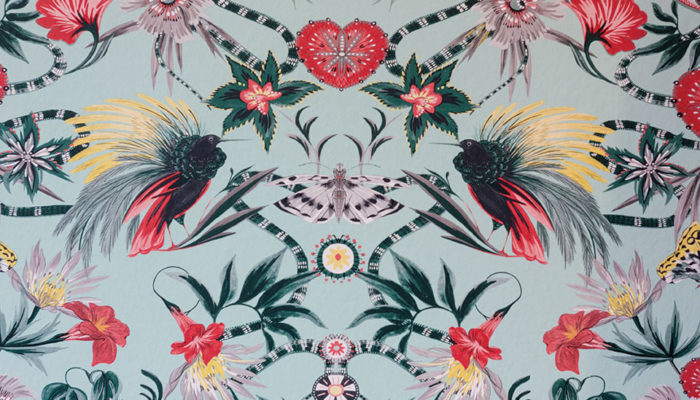 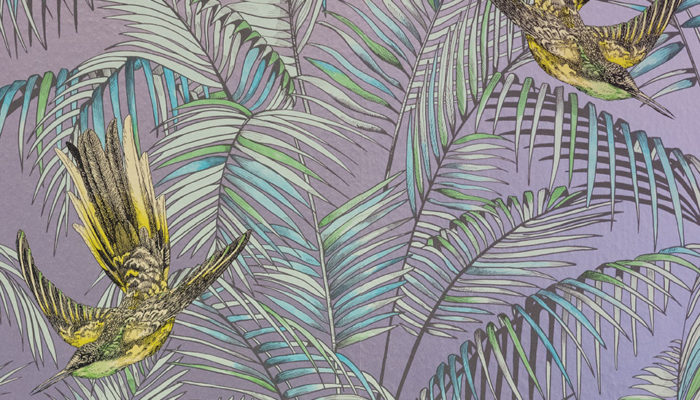 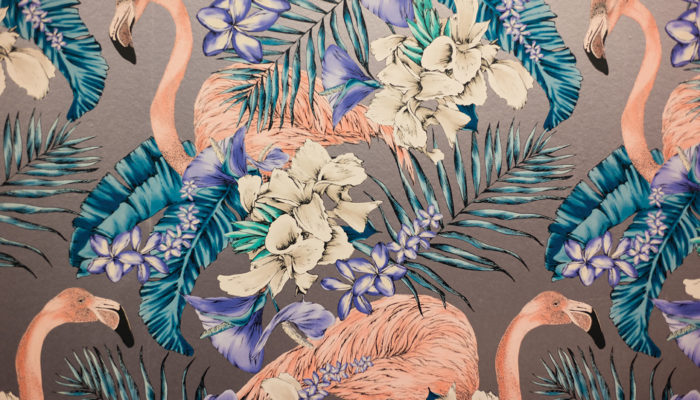