Caitlin Coughlan-Léon reviews the new collection from the British designer

In keeping with many other designers at London Fashion Week, on the eve of her funeral the ERDEM SS23 show at the British Museum was dedicate to Her Majesty Queen Elizabeth II.  Designer Erdem Moralıoğlu, himself a recipient of an MBE in the Queen’s 2020 Birthday Honours list, encapsulated the romantically melancholic moment by closing his show with a cortège of optic white hand-draped bodices with ravaged skirts and veiled in black embroidered tulle.  It left the sense of a fitting ode to her Majesty’s timeless style and capped an inspiring collection. 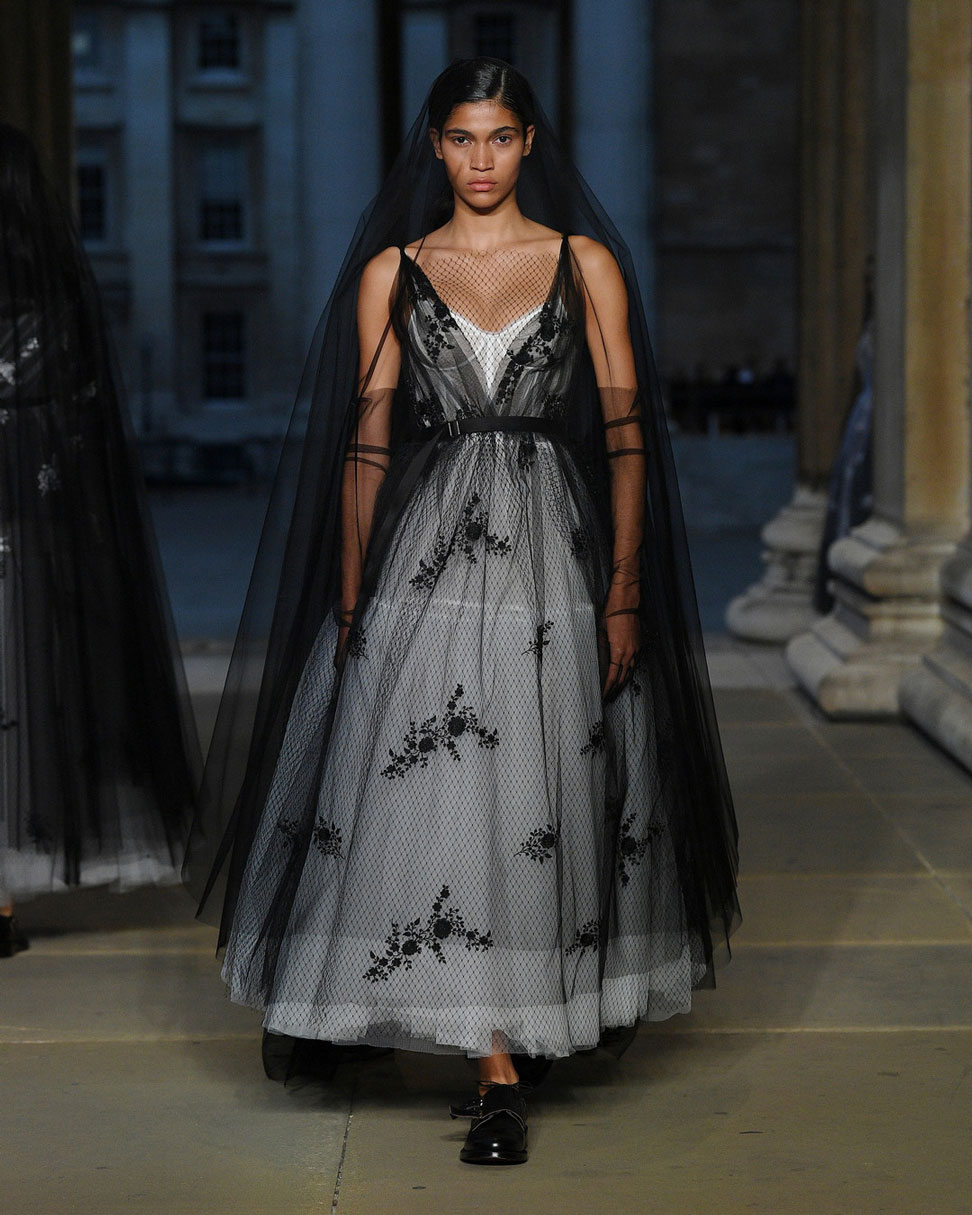 Influenced by the world of art restoration, the catwalk celebrated the technicality and creativity necessary in the field through detailed embellishments and fine (art) prints.  Draped corset bodices tied into a bows at the waist and were paired with a pencil skirts overlaid with etched Old Masters prints. This particular signature was interspersed throughout the collection, in tribute to the time spent with the conservation experts at the Tate, V&A and British Museum as the creative team began to draft next summer’s story. 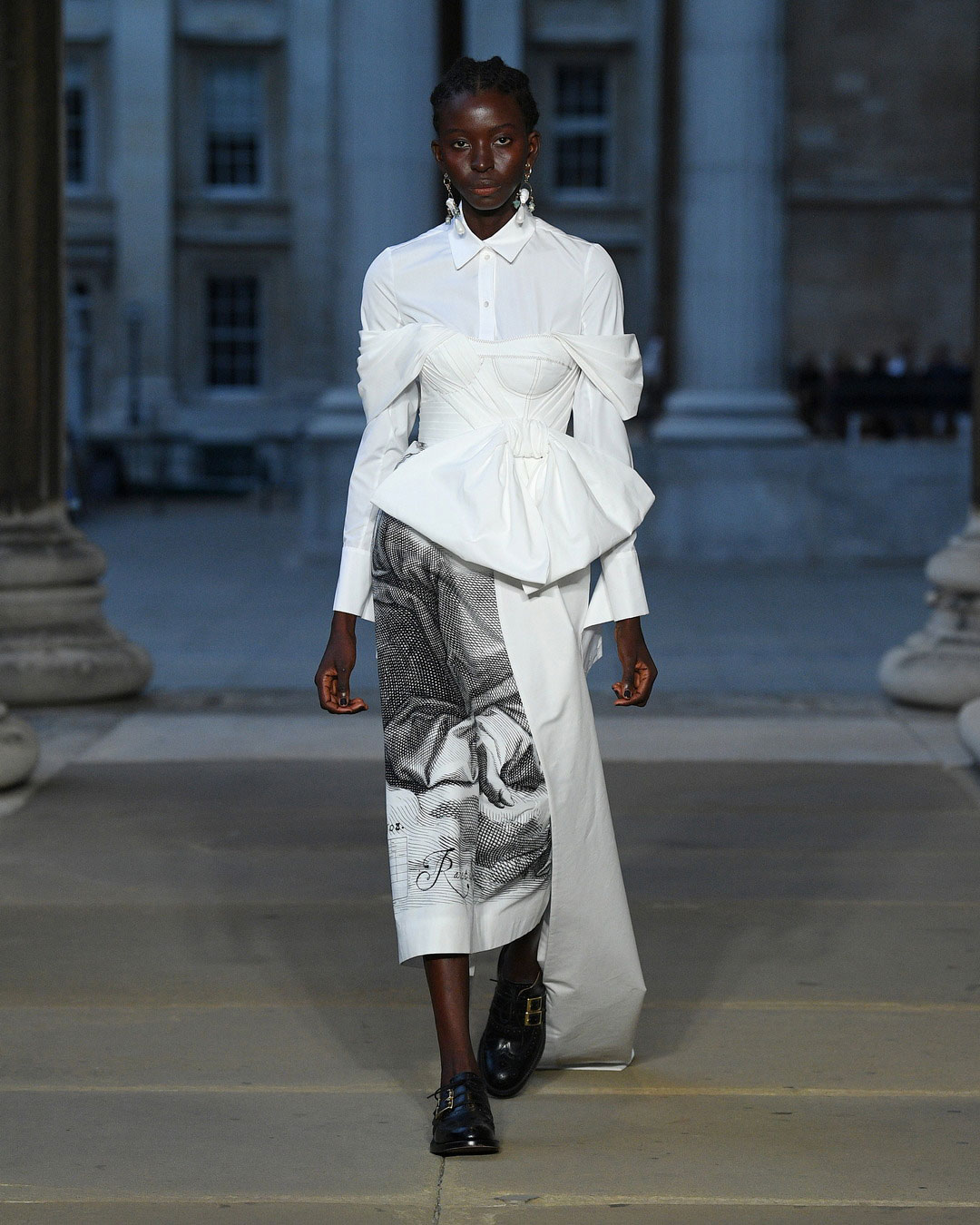 Like all great oil paintings, the use of colour became key to the success of the bigger picture. A motif of chartreuse and neutrals complemented the magnificent colonnades at The British Museum that framed the catwalk, while bright floral prints beat back the shadows.  Form was also on display for ERDEM’s SS23, with a panelled trench coat in the silhouette of a floor length gown contrasting with the refined simplicity of a halter strap, pleated summer dress with a painter’s palette hem. 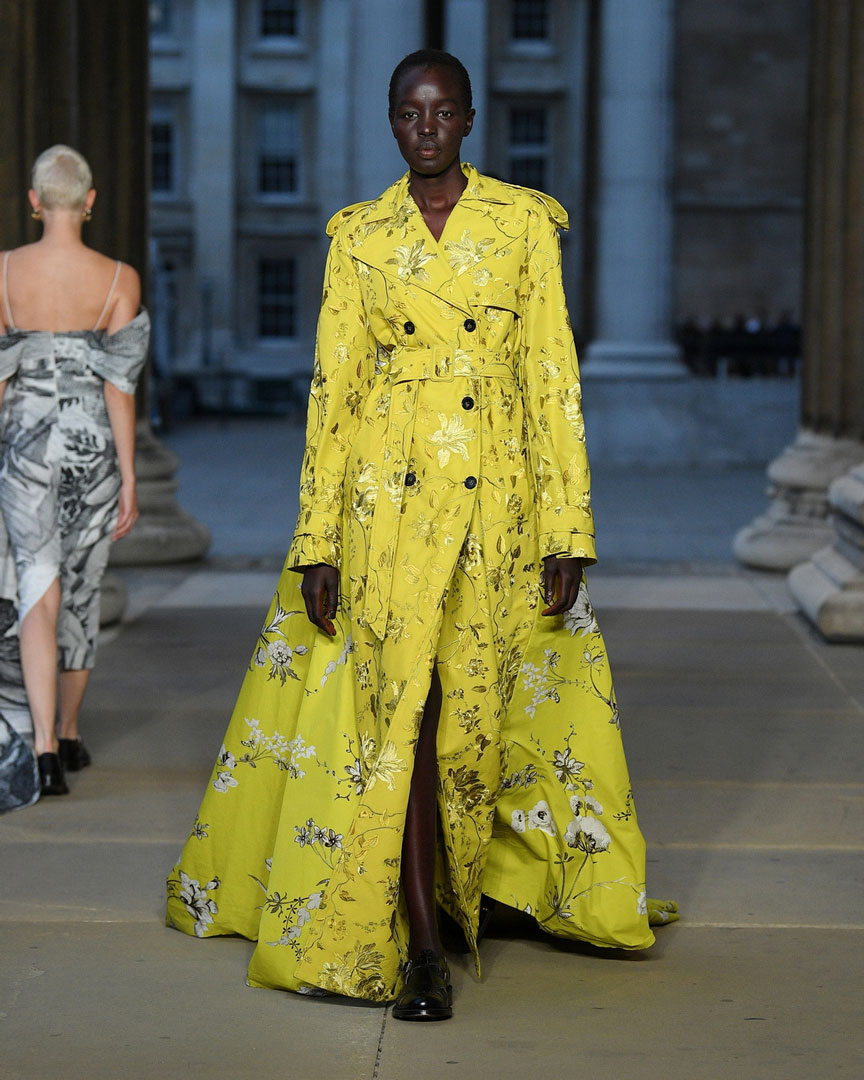 The art of restoration itself was alluded to in other looks, with the deconstructed fabrics on coats and dresses invoking vintage antique rugs with threadbare patches.  And, as an art like any other, it offered a glimpse into another world and reminded us that in a quest for perfection, there can a thin line between pursuit and obsession.  Moralıoğlu explored this precarious balance in raw hems and skeletal exposed seam corsets, conveying emotions of unfinished dreams underwritten by a subtle vulnerability. 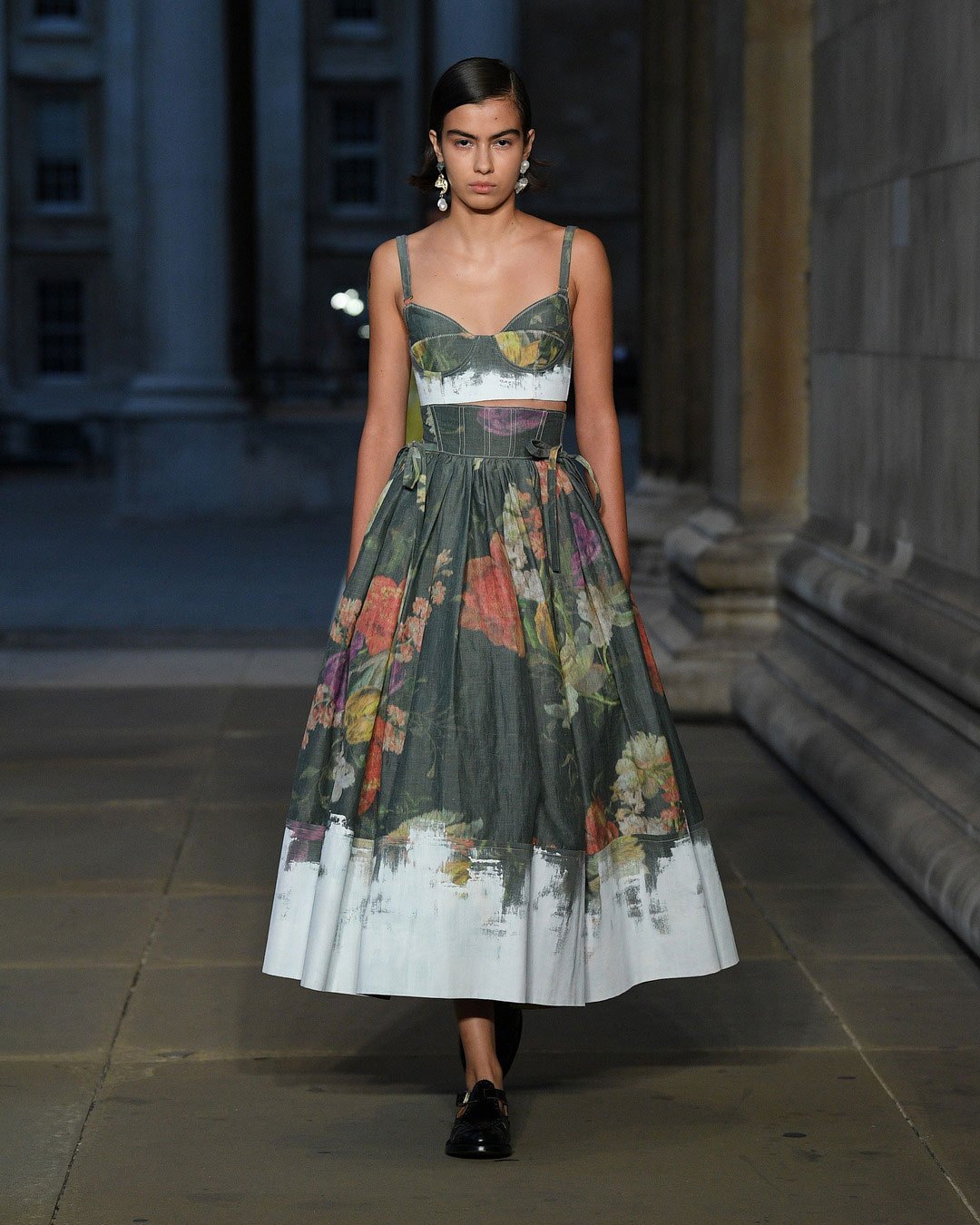 The level of work done at the V&A specifically inspired the undone tulle under structures of the finale gowns.  The painstaking reconstructions the team witnessed influenced the mixtures of garments and patterns that came together to create something entirely new. 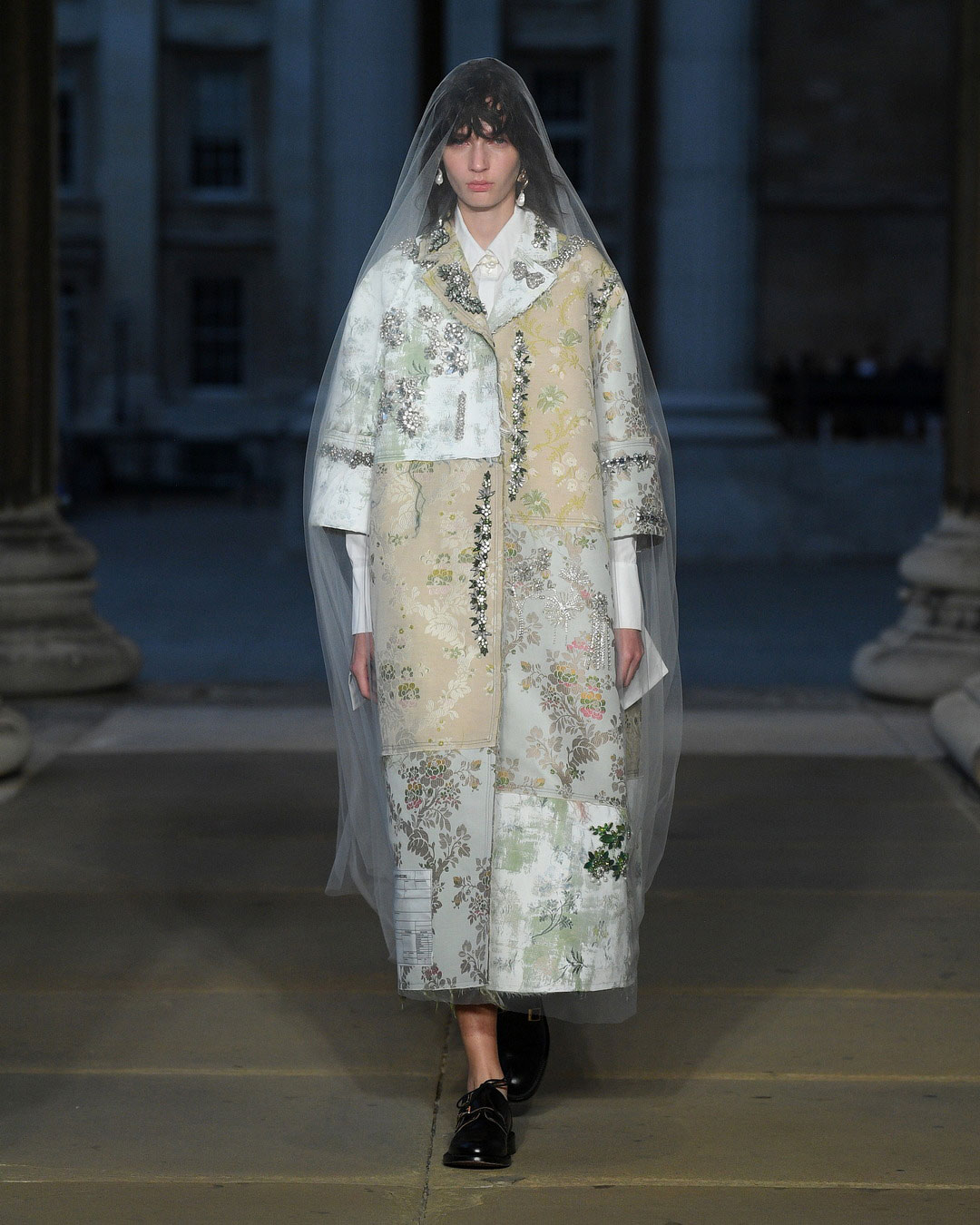 “To me, there was something so interesting in the idea of the fragments,” said Moralıoğlu of the clothes.  “It was fascinating to cut up different garments and morph them together.  There is a sense of the undone in this collection.”  It’s ironic then that it should have most wardrobe plans for next summer all tied up.