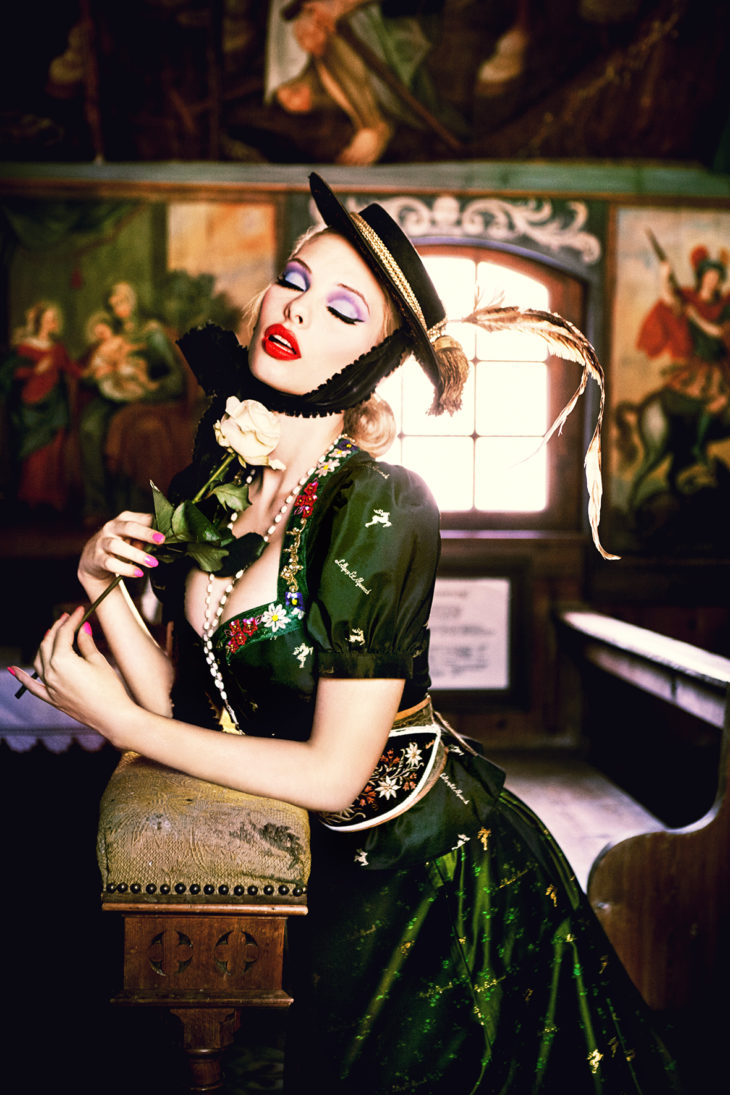 Ellen von Unwerth’s latest work, Heimat, published by Taschen earlier in the year, is best described as “an enchanted tour around Bavaria”, one that exudes the photographers signature cheeky, sensual style.

It is Ellen Von Unwerth’s humour that pervades the pages of Heimat, as the renowned fashion and music photographer revisits her childhood homeland to shoot a typically carefree, highly sensualized ode to the female form.

Models are captured happily discarding their dirndls (some vintage, some new designed by Munich-based designer Lola Paltinger), running scantily-clad across the countryside whilst eating pretzels, performing suggestively with sausages, striding out across pristine pastures, or seducing lederhosen-clad farmhands (and each other). Typically blending old-world charm with a rebellious edge and a sly subversion of traditional gender roles, Heimat bursts with fresh eroticism and wit, all reflecting an abiding love for a region the photographer clearly holds dear to her heart.

The title refers to the German term describing a person’s relationship to a physical and social place; translatable as Fatherland or Motherland, where you were born and where your roots lie.“It’s like going back in time,” she told WWD. “I lived in Bavaria from about age 10 to 16 and when I went back, it was incredible to see all these people who still dress in dirndls and lederhosen. I thought it would be fun to do a book in my way.” While Bavaria is not, technically, von Unwerth’s heimat, she has described this project as more of a parody of the “whole Bavarian thing”.

“I was free from influence and I was able to take the best from everywhere. I don’t really have a heimat.”

Von Unwerth was born in Frankfurt in 1954 and grew up in an orphanage and a succession of foster homes. She has no recollection of her parents and not much inclination to reflect on their absence. “It’s what made my life,” she recently told the Guardian. “I was free from influence and I was able to take the best from everywhere. I don’t really have a heimat.” It’s not hard to come to the conclusion that given the absence of a sense of ‘home’ has lent itself perfectly to the peripatetic nature and life of that of a model turned photographer.

She moved to Bavaria aged 16 to join a commune and later went to study in Munich. On her first day at university someone offered her the chance to model and with that she never returned to her studies. That led to a shoot for the German magazine Bravo, which in turn led to her being signed by Elite models in Paris. “I kind of hated modelling, but somehow I did it for 10 years. I was not really the exhibitionist type. It’s hard psychologically to be a model. And mostly people told me not to move when I was posing. I just wanted to be like the girls in my pictures now.”

“I kind of hated modelling, but somehow I did it for 10 years. And mostly people told me not to move when I was posing. I just wanted to be like the girls in my pictures now.”

What has come of her own experience and subsequent philosophy towards representations of the female form and sexuality is undoubtedly one of the more influential aesthetics in modern fashion photography. There is a freeness, a relaxed yet overtly confident sexual element to every woman photographed by von Unwerth, a reclamation of the dominant male gaze by a female eye that understands the power of this sensuality.

Heimat is published by Taschen as a collector’s edition of 1,500 copies, each numbered and signed by the photographer. For more information, go to taschen.com.