Since being appointed as Dior’s first female creative director in 2016, Maria Grazia Chiuri has delivered a seismic shift towards a more female-empowered focus at the iconic fashion House.  Her latest collection for Paris Fashion Week continued that direction in an intriguing expression of admiration for strong women like Catherine de Medici, the Italian-born Queen of France, and for the city of Paris itself. 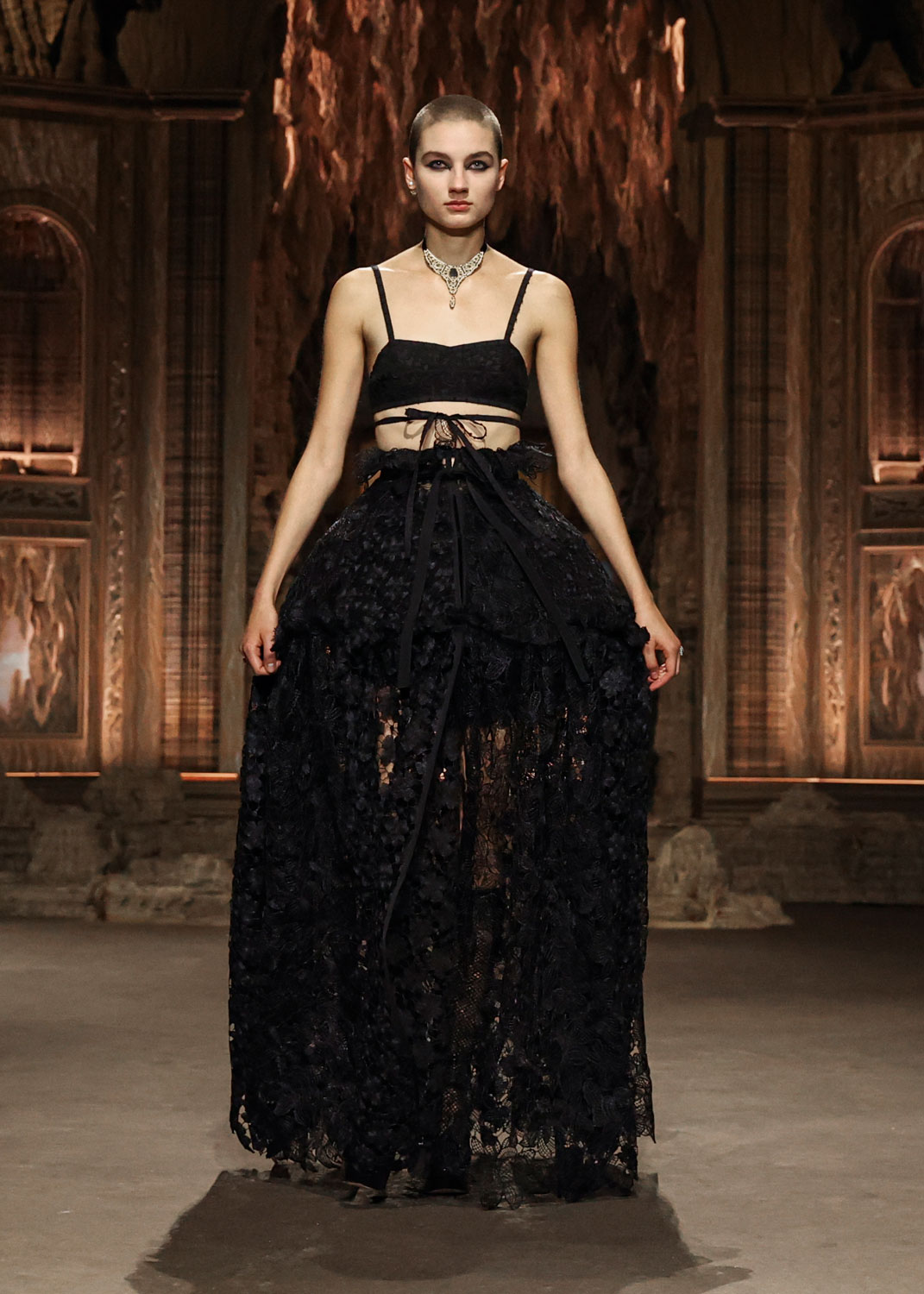 Setting the scene were contemporary takes on the sights and sounds of the 16th Century French Court.  Virtuosic dancers performed to the sound of a harpsichord in a grotto-like structure at the centre of the stage and, as tension built, the cast began to emerge from behind classical archways to set Chiuri’s romantic story on the march. 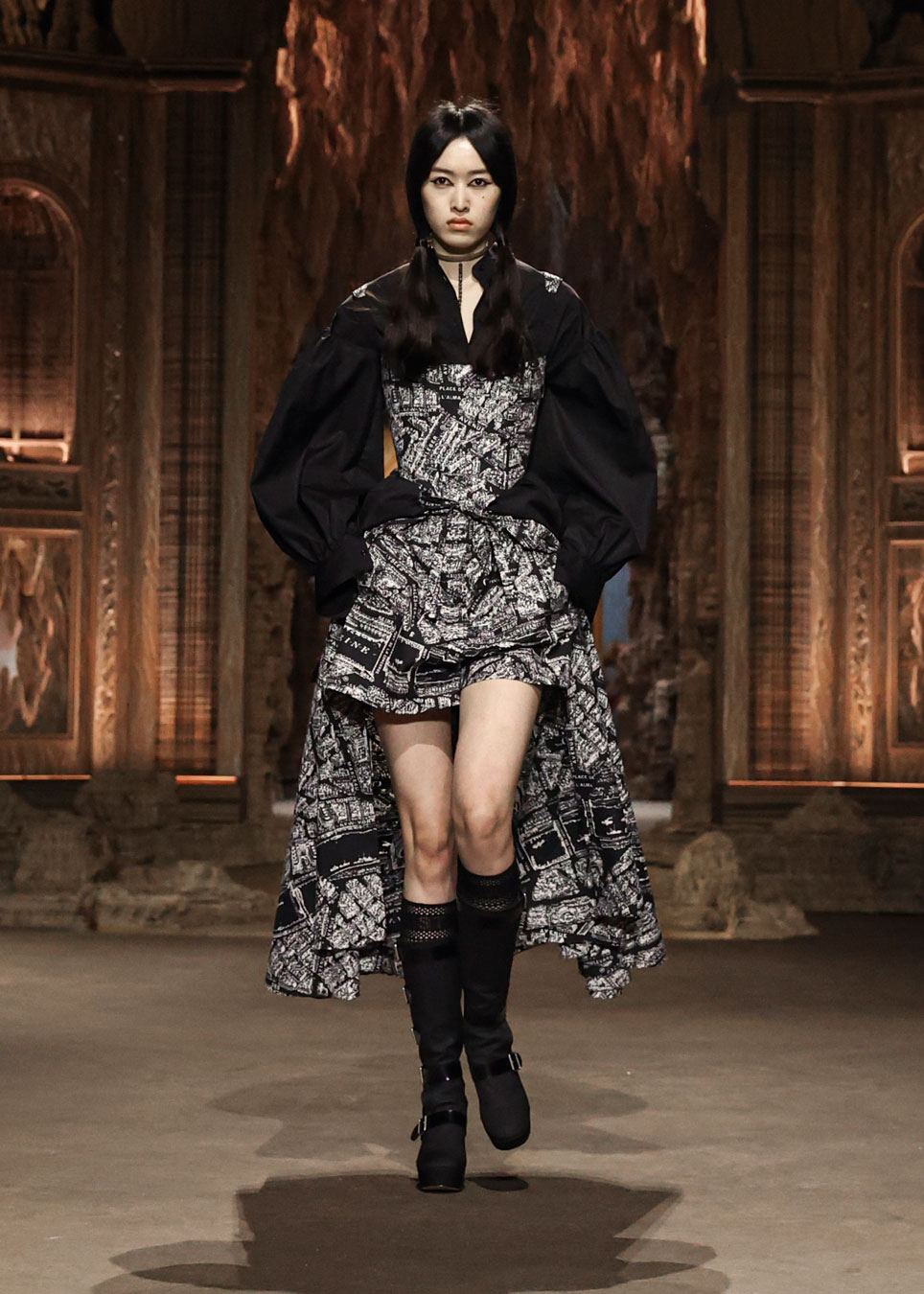 Continuing this season’s gothic renaissance, and perhaps as a nod to Medici’s own reputation as the original ‘Black Widow,’ an array of looks came by in deepest black.  For modern-day twists on traditional Court styles, lace dresses with hoop skirt underlays were cut to a mini length, corsets were placed over shirts with billowing sleeves, and midi skirts featured expansive ruffles and ruching. 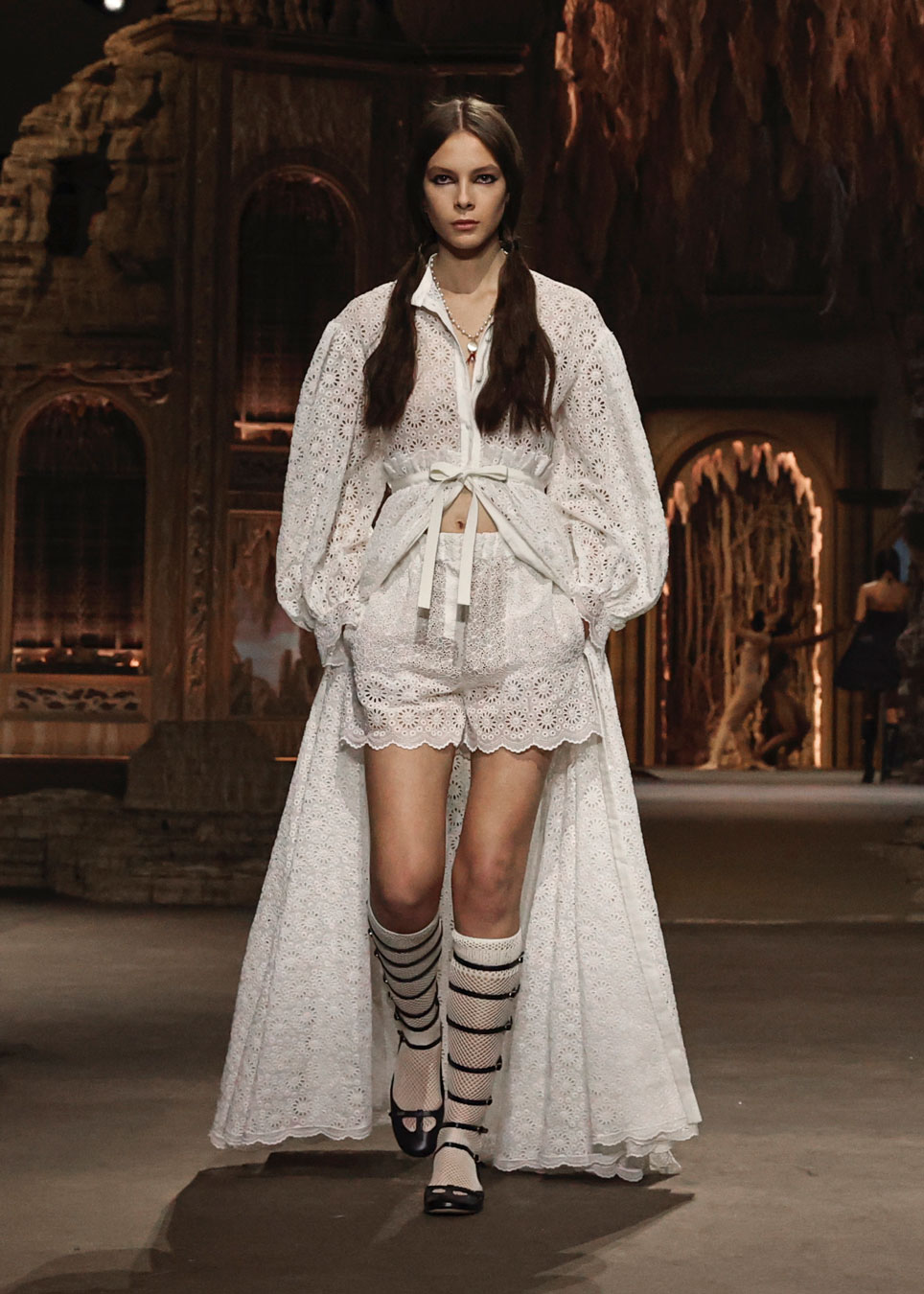 The boldness was balanced by moments of softness, with the conscious addition of a paler colour palette of white, beiges and golden hues.  Long over short became another subtext.  Seen in broderie anglaise, lace and other textures, the pendulum swung tantalisingly between modesty and daring.  Raffia also made a return, spun into tactile coats and skirts adorned with delicate floral motifs. 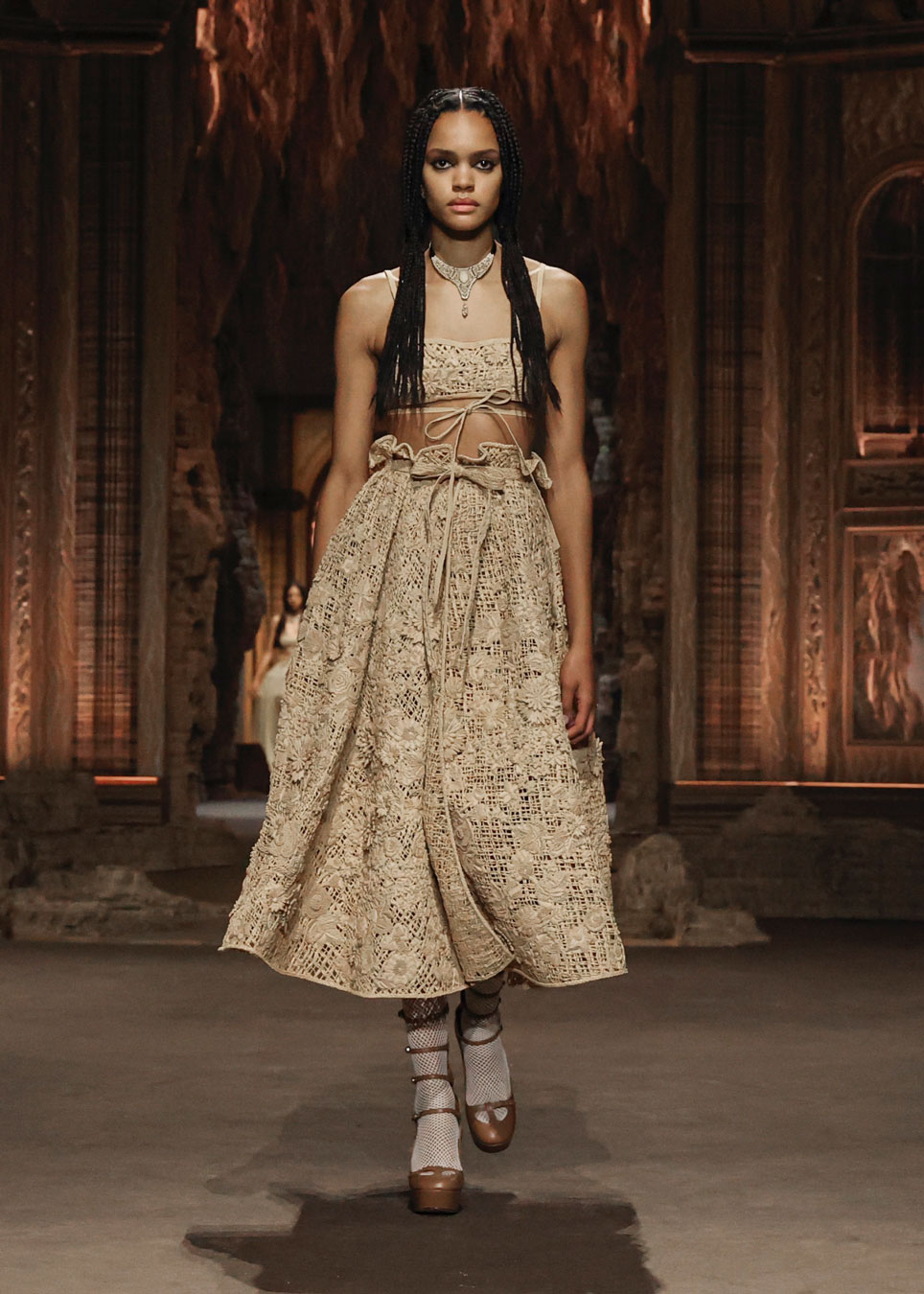 Such motifs were also observed in the shape of rich embroidery and fabric prints, or crafted into ultra-feminine shorts with ruffled seams, flowing paper-bag waist skirts and elaborate outerwear.  Flat or chunky statement shoes added an edge of contemporary swagger to complement each look, with or without the addition of straps to the mid-calf and often placed over knee-high stockings. 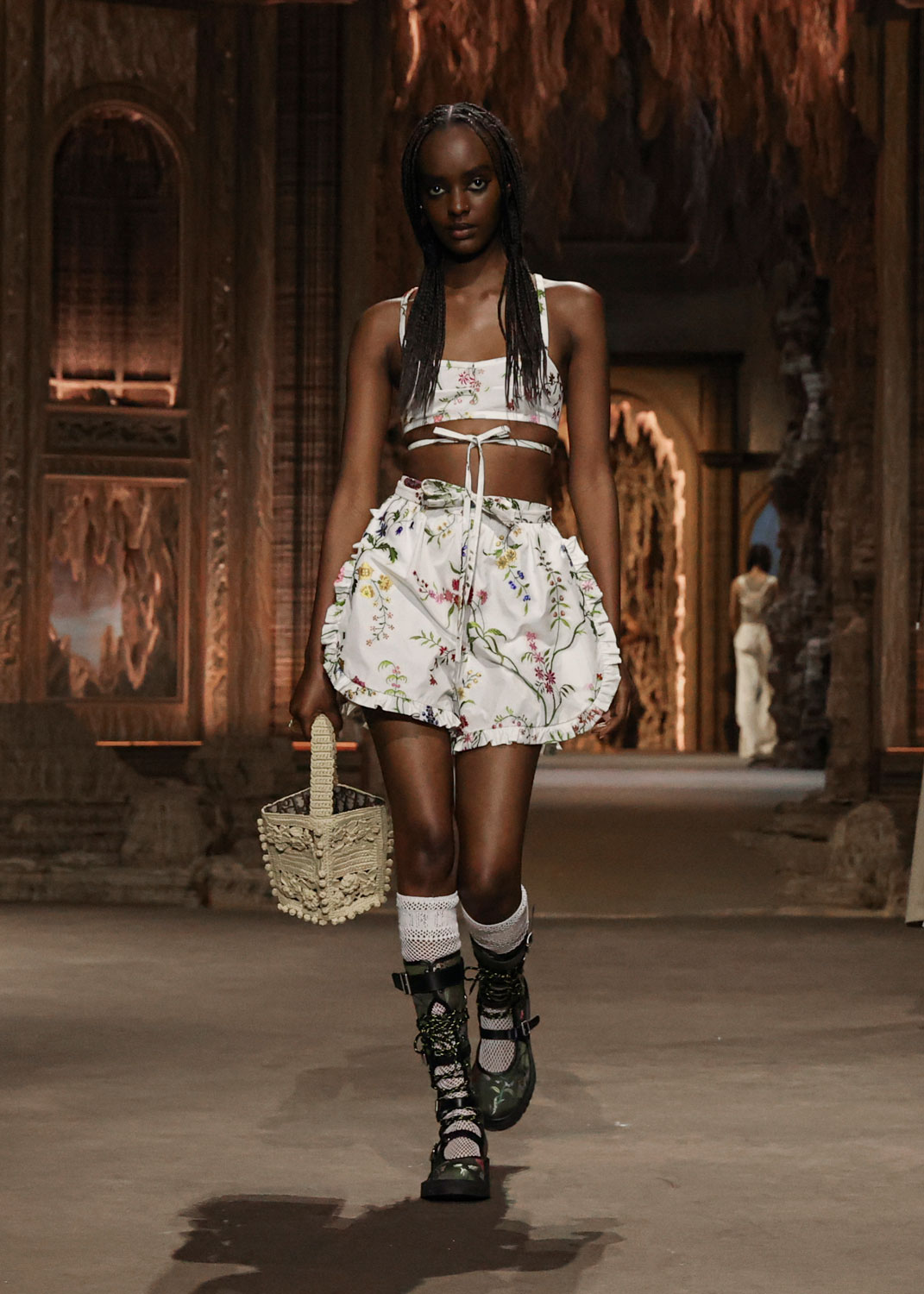 Through this immersive new spectacle, Chiuri and Dior SS23 invited us to take a brief step back in time to discover just how many ways historically rooted fashion can seamlessly merge into even the most modern wardrobes.  There can’t be many better ways to go back to the future.