It’s fitting that on the 75th anniversary of master couturier Christian Dior founding his eponymous House, his current successor, Kim Jones, should send 75 models and looks down his immense catwalk in his honour for this weekend’s Dior Men’s FW23 show.  For such a celebration, only the oldest of the Seven Wonders of the World, the Great Pyramid of Giza, could have been a spectacular enough backdrop for the occasion.  “My interest in ancient Egypt is about the stars and the sky,” said the designer.  “It’s that fascination with the ancient world and the parallels with what we look at today.” 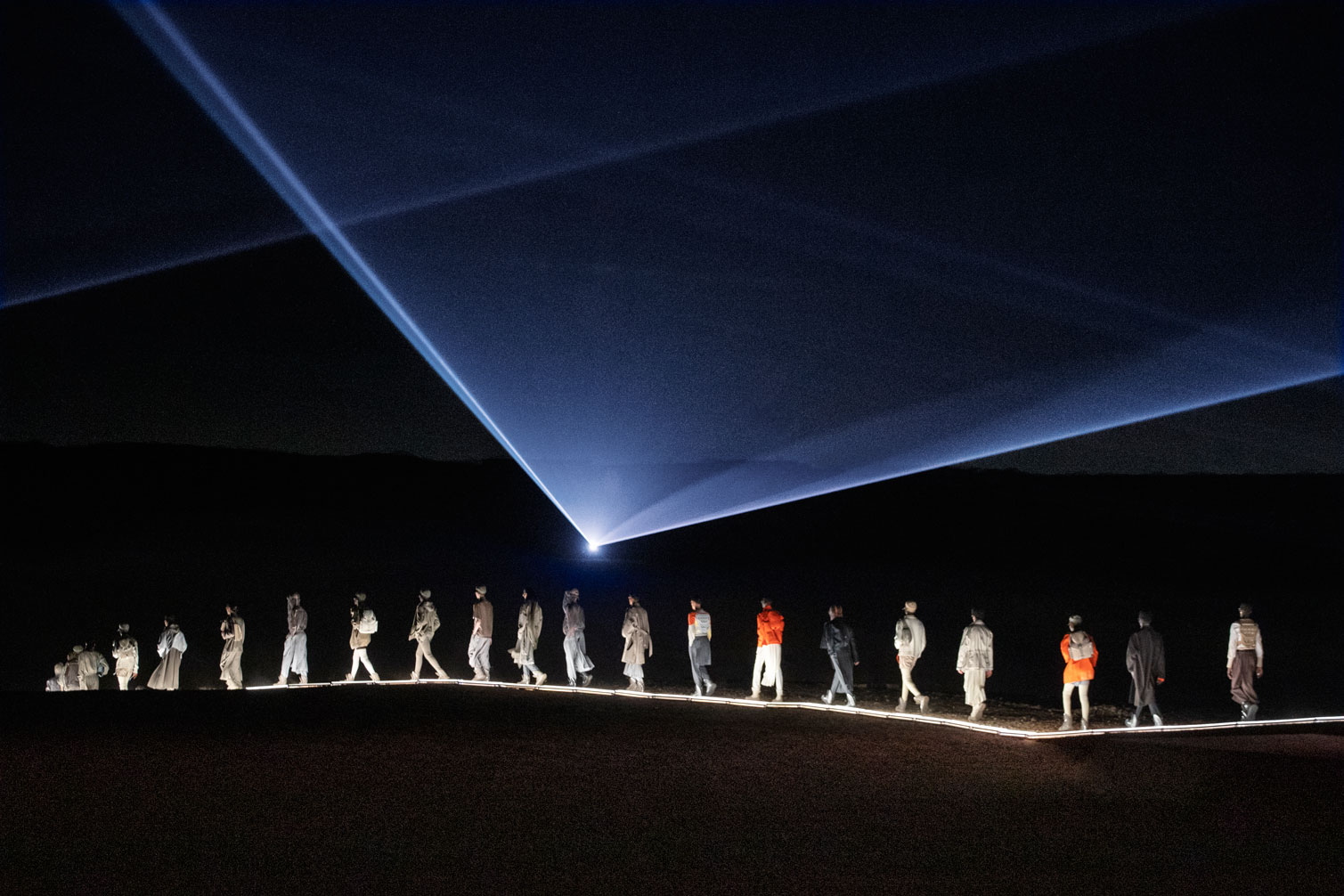 As night fell and the stars began to shine in Cairo’s skies, what we were looking at was the beginning of the story of the Jones’ winter 2023.  As the cast began to snake their way along their illuminated journey, the symmetry seen with the layering in the looks and the layers in the colour palette came into view.  Clean neutrals graduated to muted tans and greys, with flashes of bright orange and lemon yellow occasionally disrupting the flow. 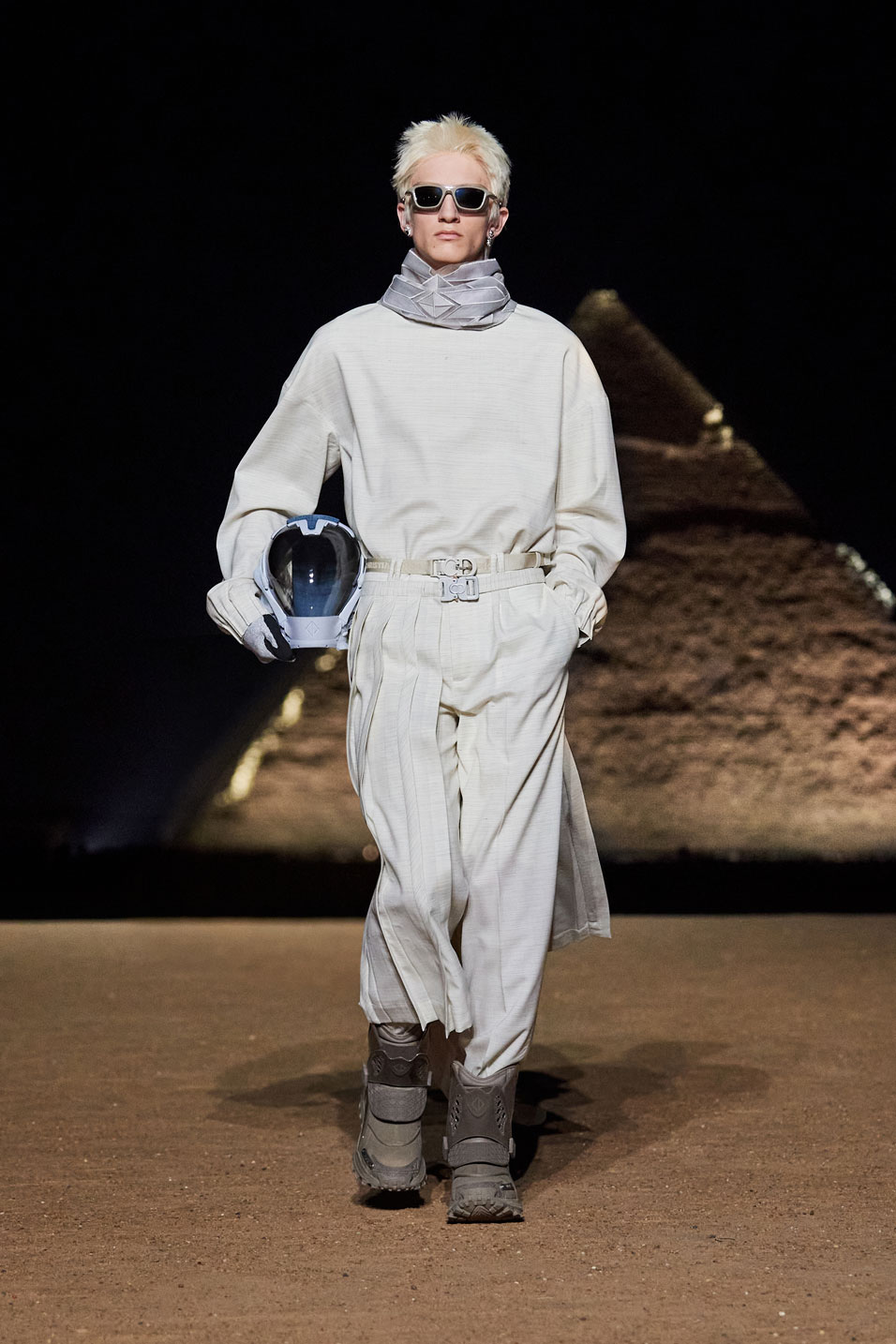 Ensembles that at once reinforced and challenged the norms and forms of masculine tailoring, were underscored with archival embroidery fashioned to evoke futuristic body armour.  Sharp edges were softened with sheer fabrics, sweeping silhouettes and asymmetric kilting (originating from Dior’s Bonne Fortune dress) draped from trouser waists.  While elsewhere, the aforementioned skin-tight winter leggings were worn under delicate short shorts, clearly merging both summer and winter and masculine and feminine tropes. 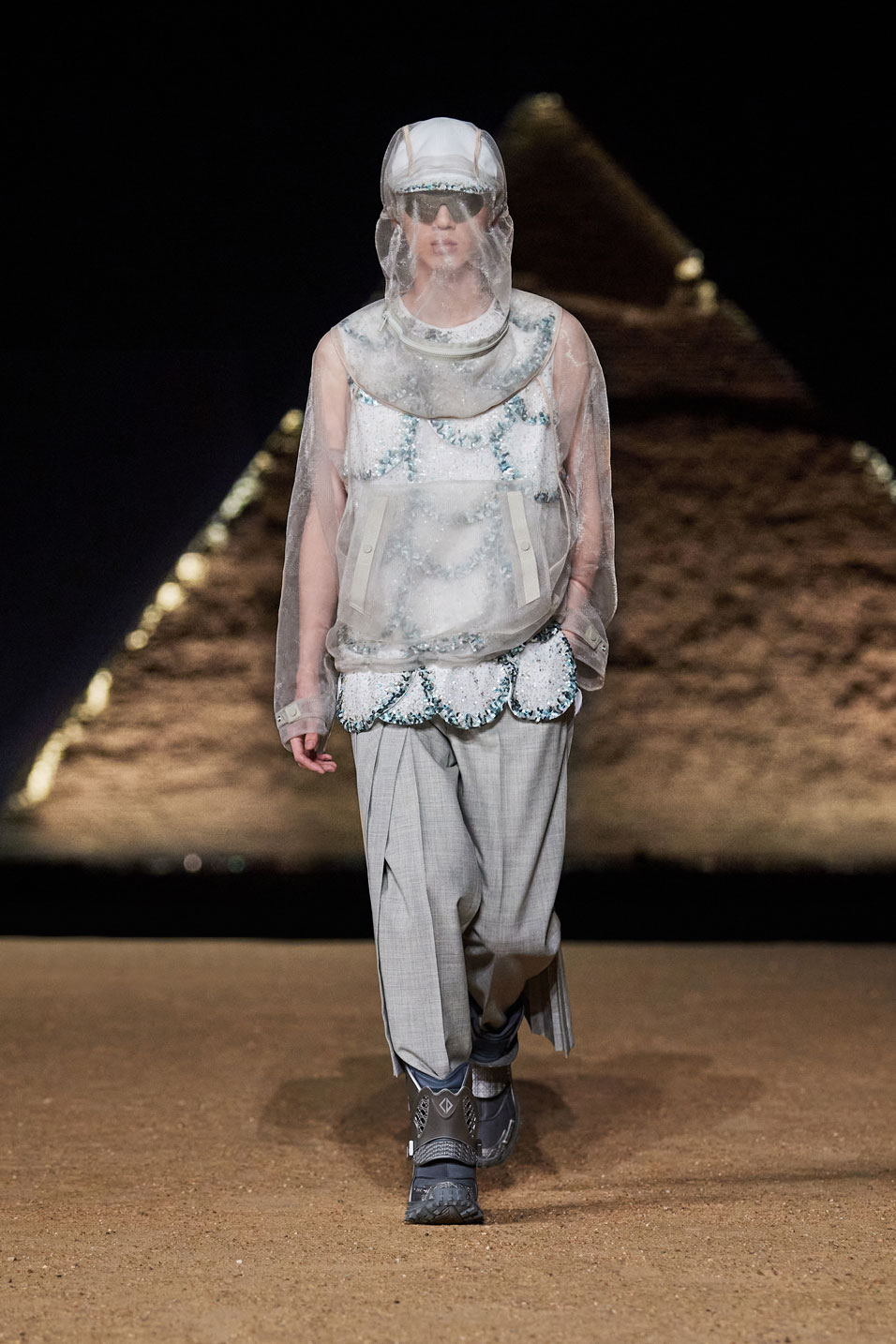 What was also clear was that, as with all the best artistic directors, Dior’s always understood how to build on the legacy of the past – even with an archive this daunting.  From that archive came the underlying motif of the night, the Lucky Star – or rather, Jones’ interpretation of the emblem that Monsieur Dior himself happened upon that prompted him to set up his own House in his early days. 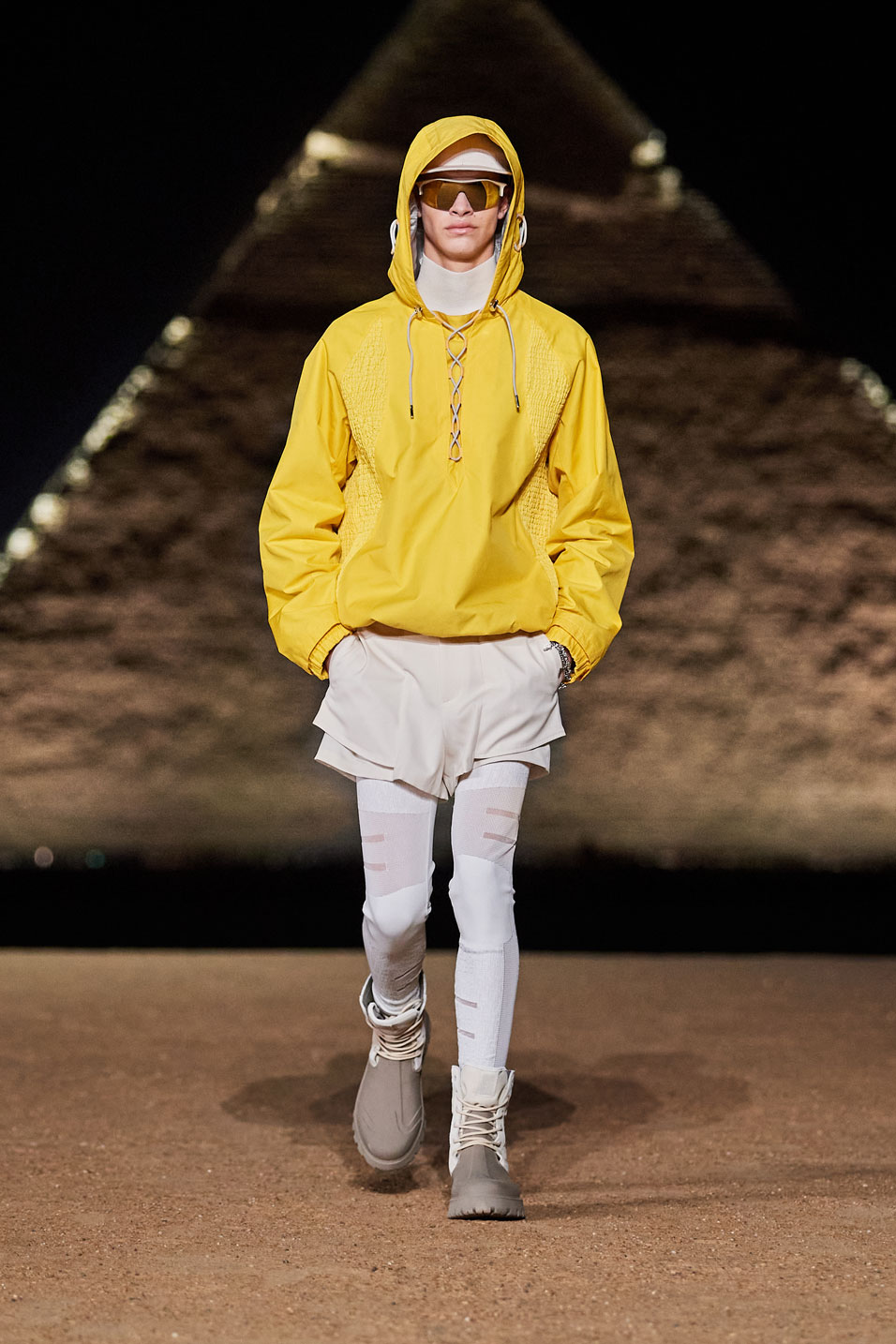 Those stars now formed part of the graphic cosmic skyscapes in vivid colours seen in the engineered prints on the leggings and hooded jackets and coats.  Just like that, the transition from past to future was happening before our very eyes, and it was seamless.  Once it dawned on you, you became trained to pick it out and marvel at the technicality. 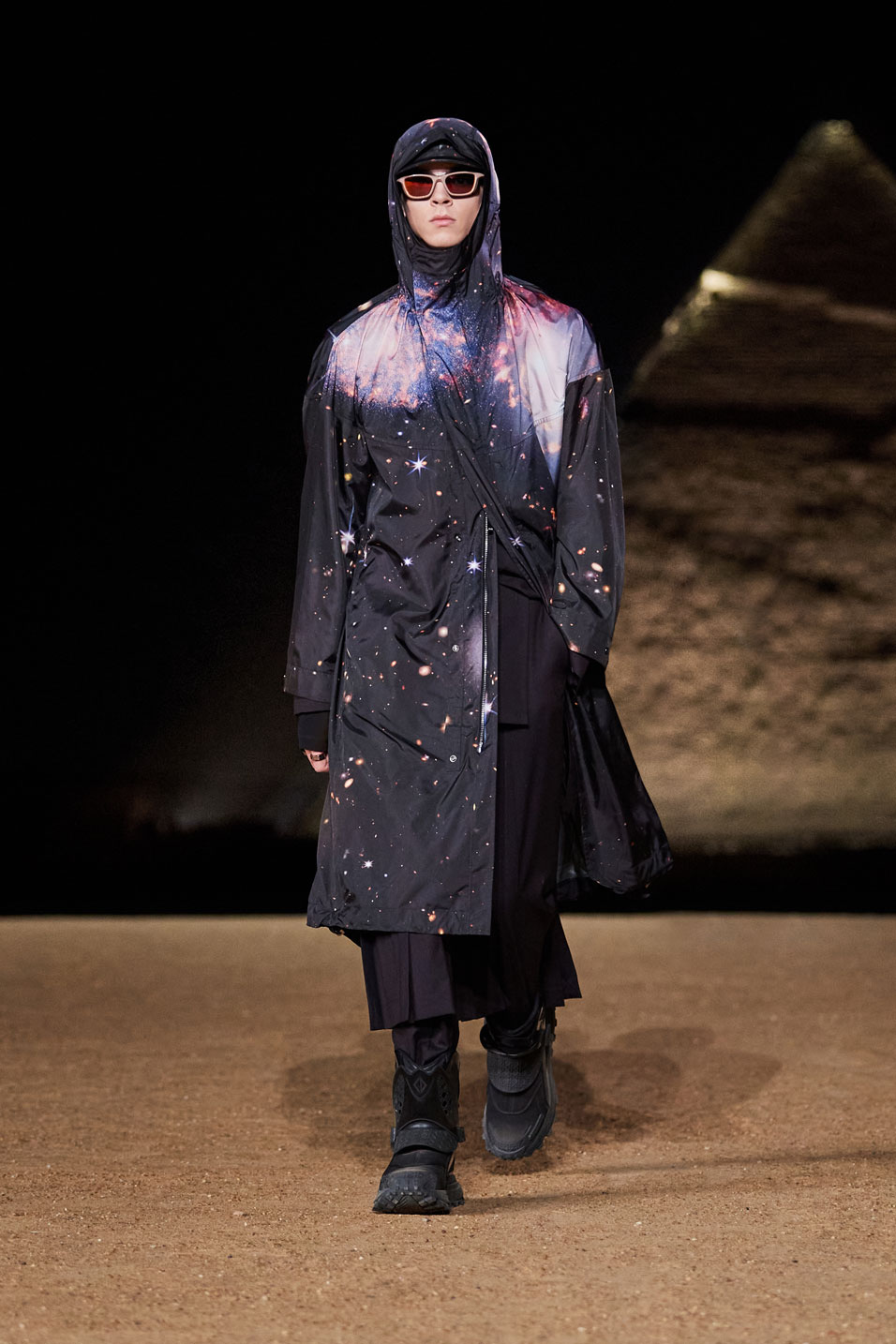 As Jones himself put it, “In both the collection and the show there is an idea of ‘Guided by the Stars’ and what that can entail in many ways.”  Given the night in Cairo, it seems obvious where most of us will be guided to next winter.

Click here to read our last feature on Dior