The Daniel w. Fletcher SS23 show opened London Fashion Week this year with Stand and Deliver, a fitting tribute to Her Majesty Queen Elizabeth II and the designer’s celebration of London life. 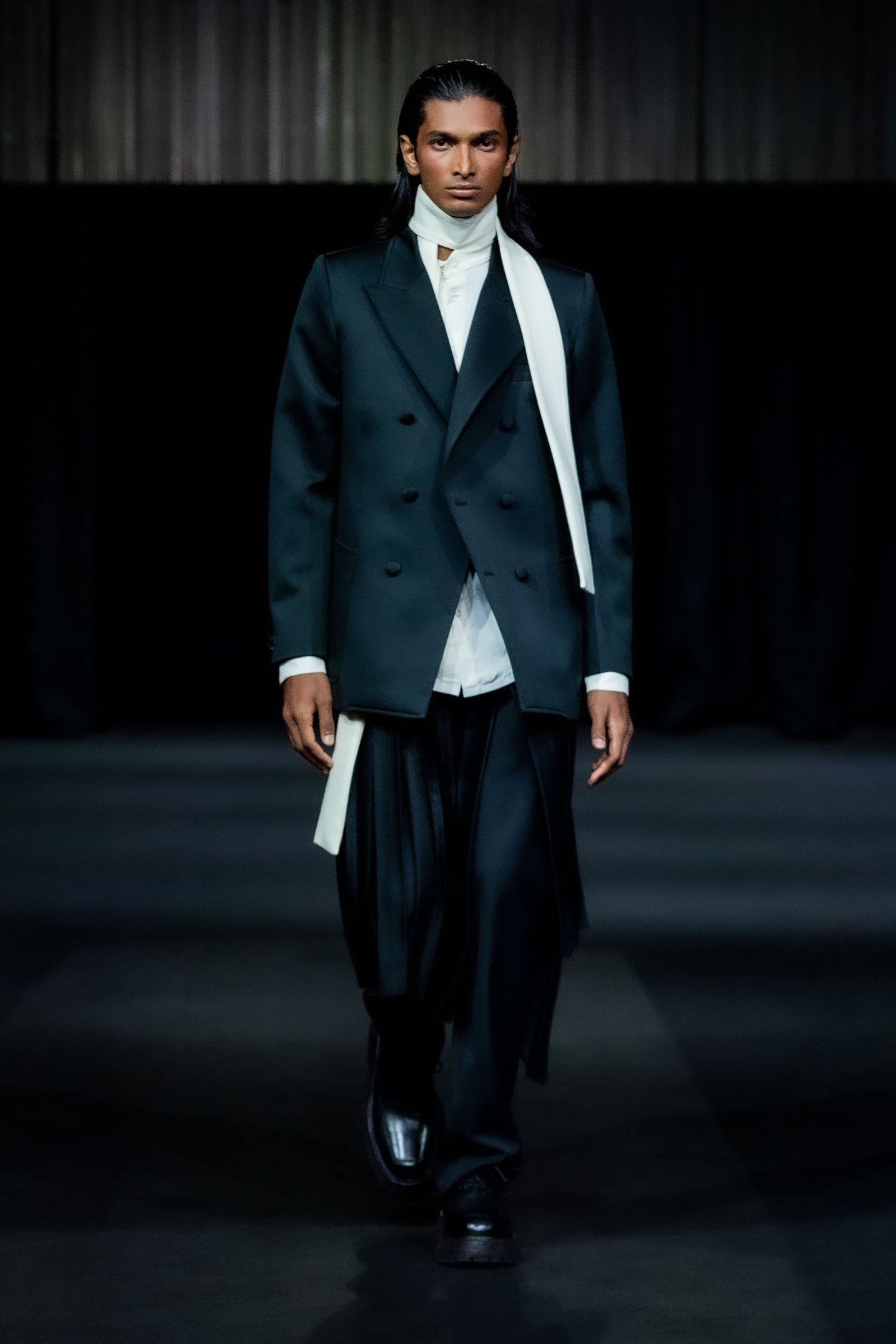 Set in the new Londoner Hotel, the collection was a tale of what it really means to be a ‘local.’  Fletcher, who moved to London to study at Central Saint Martin’s ten years ago, honoured the punks of Kings Road, well-dressed city high-flyers, Savile Row tailors, the nightlife of Soho, and, of course, the monarchy, past and present.  Interwoven cultures, diverse backgrounds and competing attitudes all played on the catwalk. 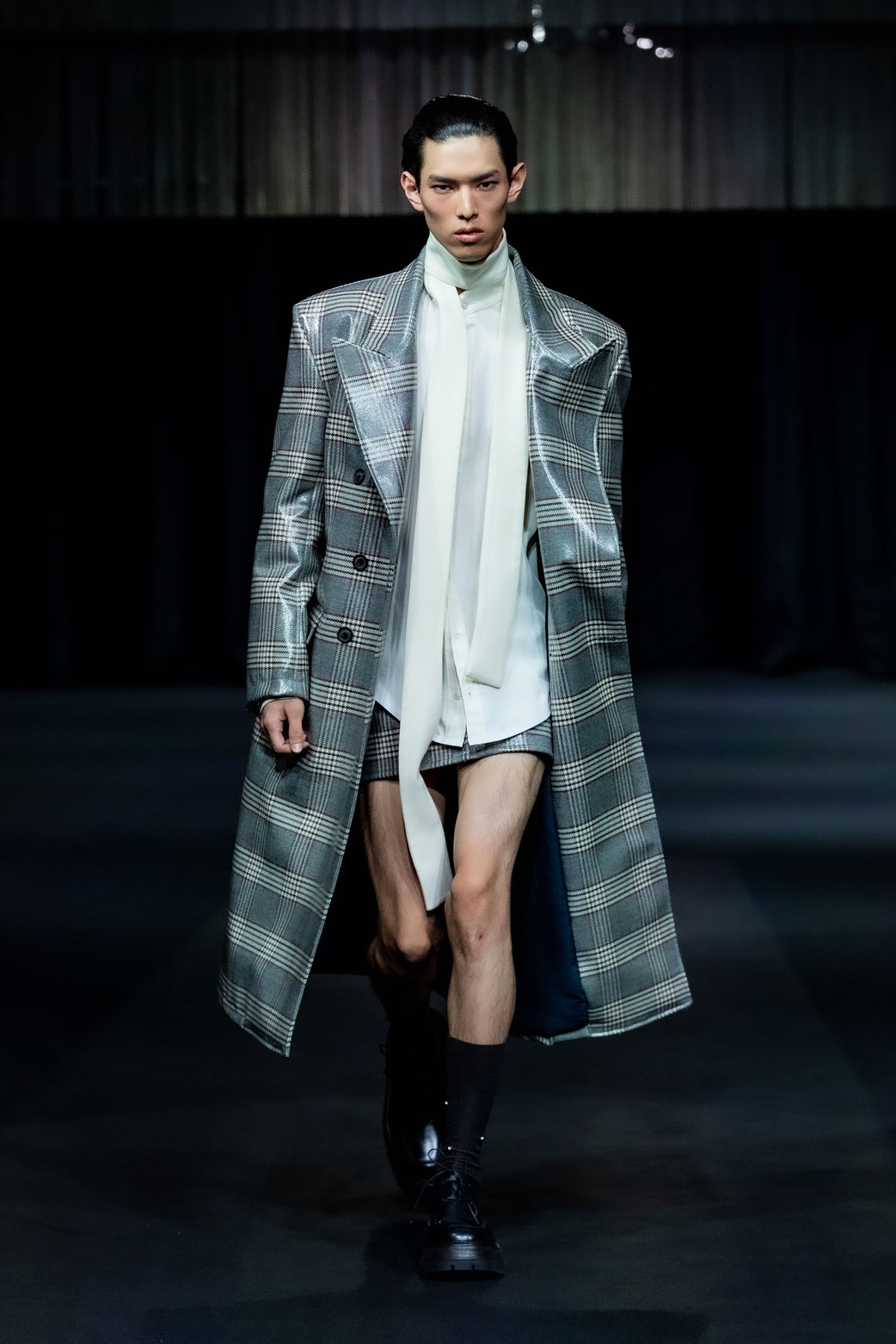 There was a feel of Old English sensibility to start the show, with structured, tailored garments modernised to create interesting shapes and patterns for the eye.  Quintessentially British styles – vintage naval uniforms, Prince of Wales checks, military coats – all came clearly stamped with ‘Modern London,’ metaphorically speaking.  Kilts and suiting were paired, warped and reimagined with fur, spinning heritage on its head. 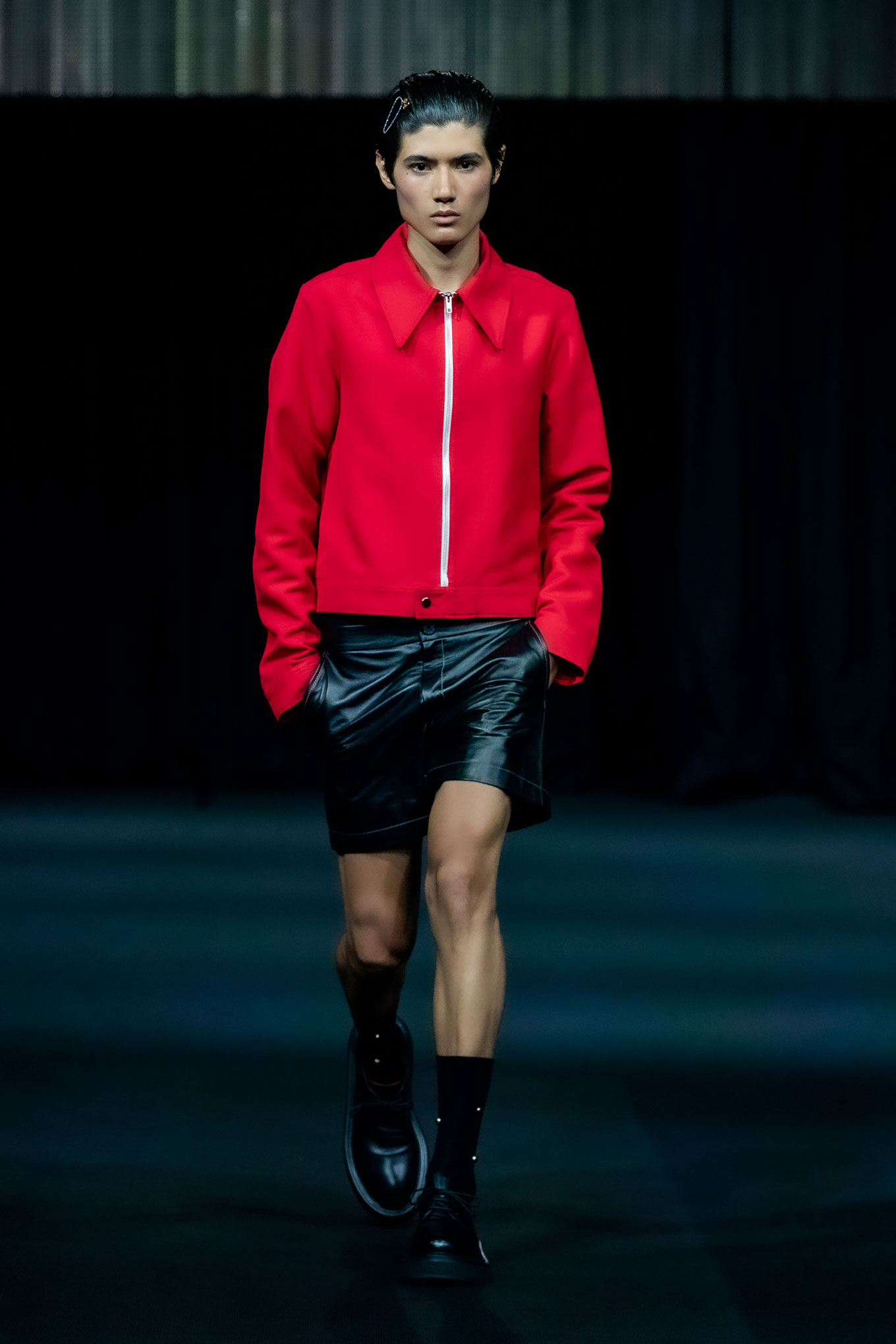 The contrast of tradition and identities merged for a subtle but effective core narrative. Studded rivets, a nod to punk rebellion, deliberately crashed the party when they could.  In contrast, satin cummerbunds, a nod to white-tie formalities, offered balance and buoyancy.  Mini-skirts, too, took a grab for the limelight, in direct appreciation of the revolutionary era of the Swingin’ Sixties.  As the collection delved deeper into its influences, London’s wide-ranging nightlife became Fletcher’s muse.  The chocolate leather brown blazer recalled the beginnings of the nineties queer scene in the capital, whilst faux fur stoles evoked images of mid-century aristocracy. 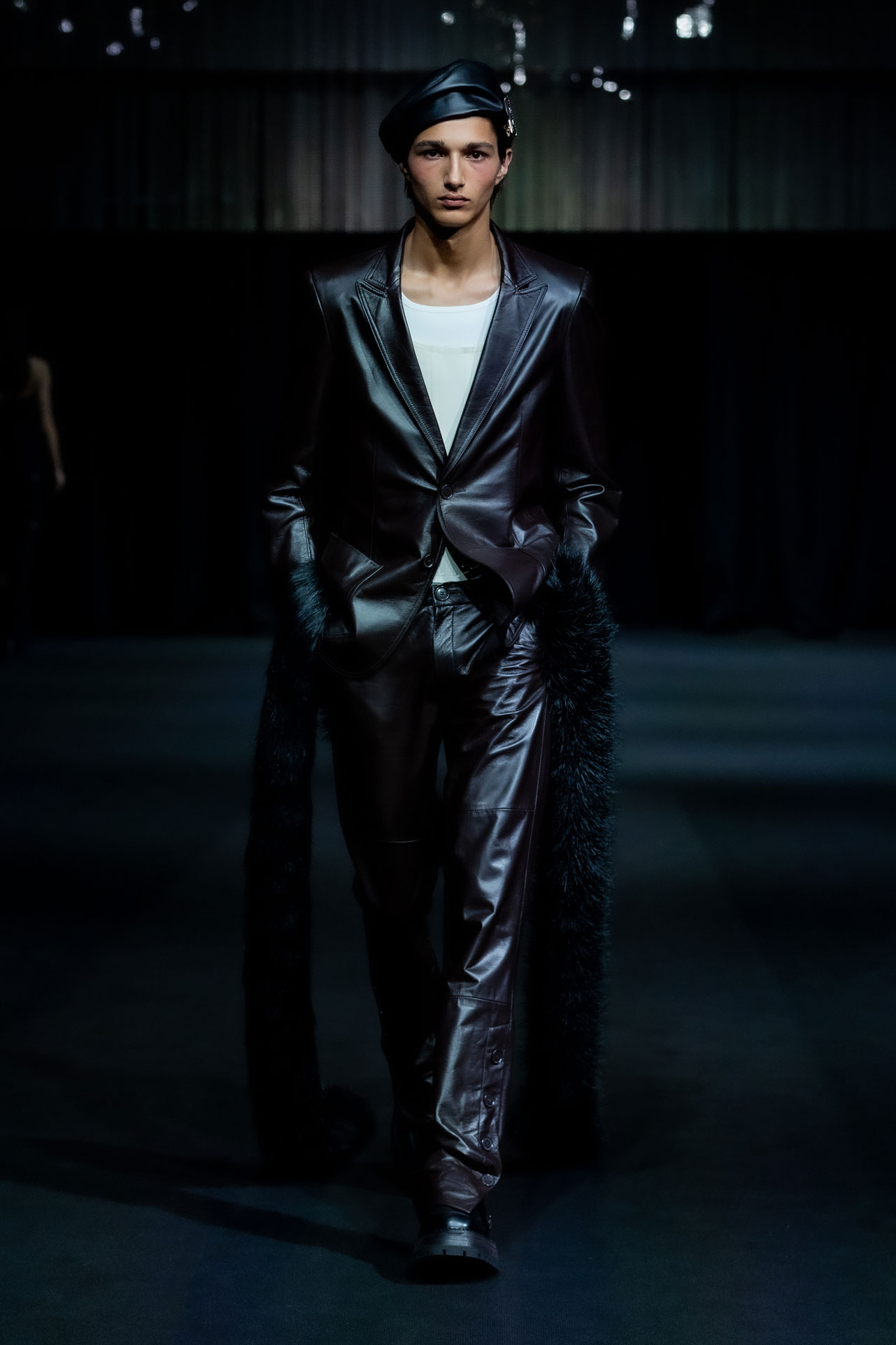 Classic corsets worn on male models added its own voice to the conversations on identity, with a garment formerly seen in fashion as a necessary method of constricting women.  This conversation was joined by the stark, gender-neutral jewellery of Hatton labs, and enhanced by a partnership with Swedish brand Axel Arigato providing customised shearling bags. 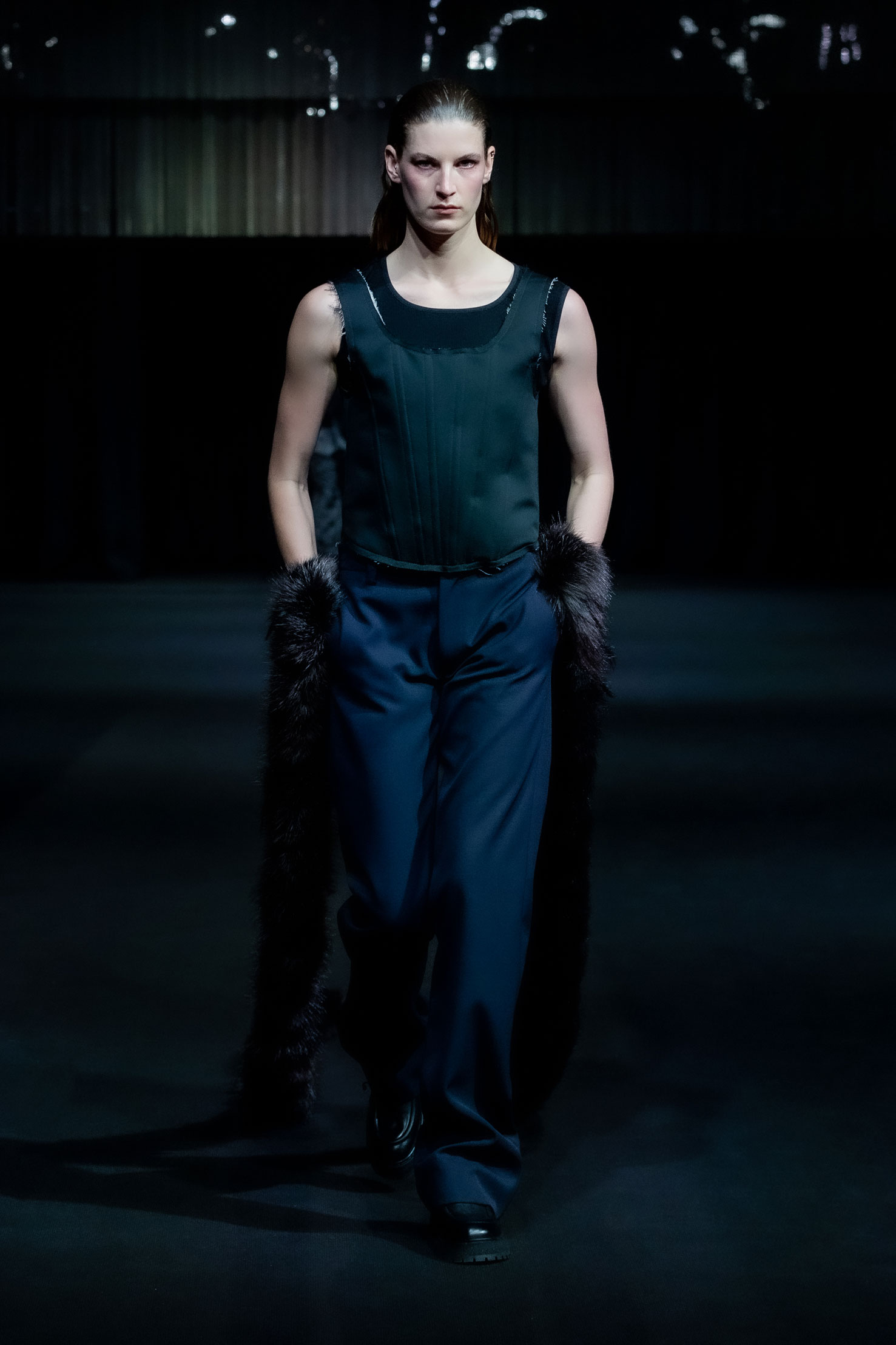 Stand and Deliver from Daniel w. Fletcher symbolised the legacy of London and its captivating culture, while also treating us to a glimpse into the city’s future.  If we reach for it.