Described as a ‘collage’ by creative director Virginie Viard, the Chanel SS23 RTW collection painted a true visual analysis of the Chanel woman.  In drawing inspiration from Alain Resnais’ 1961 film Last Year in Marienbad, Viard attentively explored the minimalist decadence and complexity of the film’s heroine, known only as “A” – a heroine who was actually dressed by Gabrielle Chanel herself for the production. 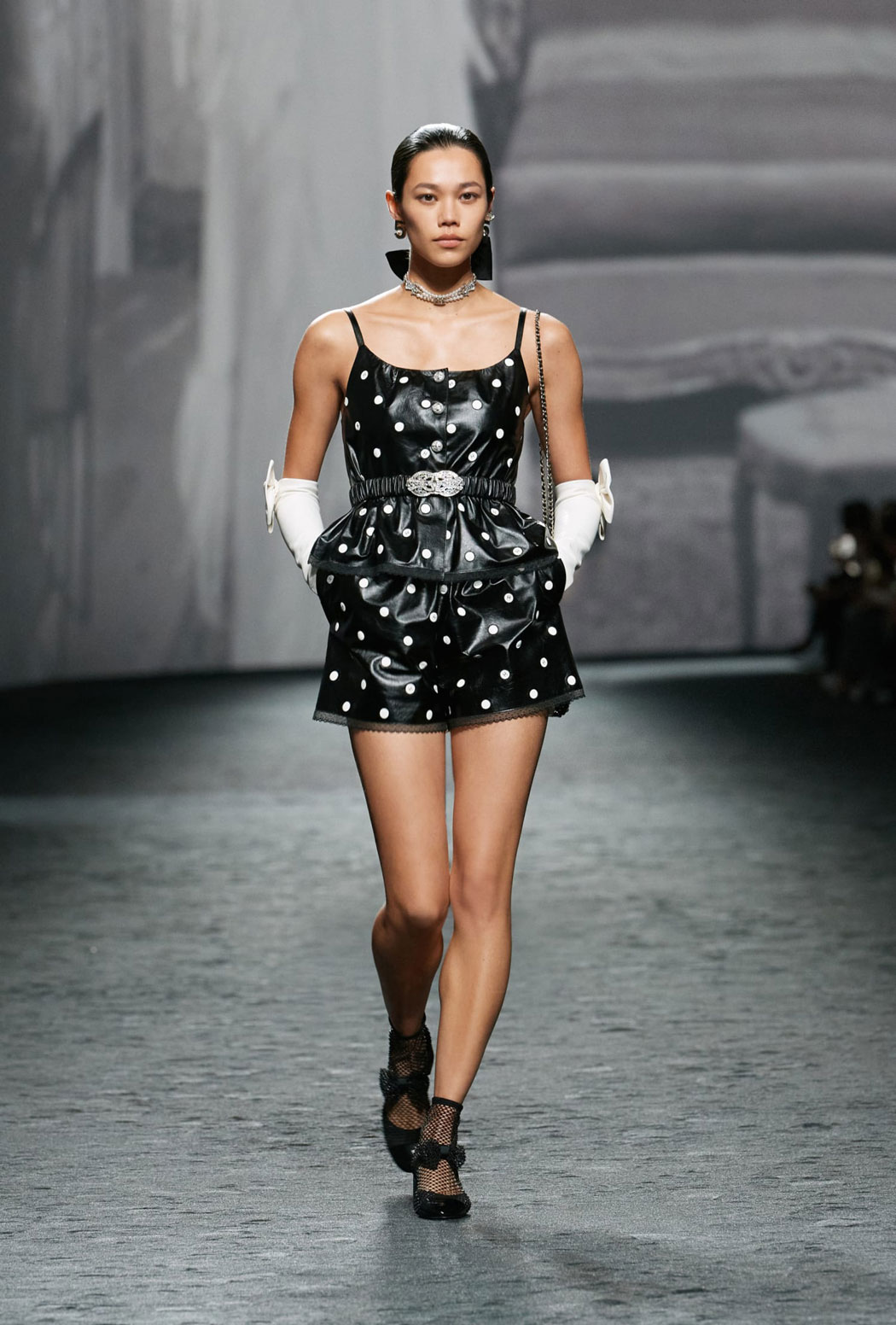 The designer embarked on creating a collection drawn from the elegance of A’s 1920’s inspired clothing.  Unfolding in an opulent Baroque hotel, her timeless attire and the freedom it offered spoke to the fluctuating narratives between past and present, and the ongoing questioning of fiction versus reality. 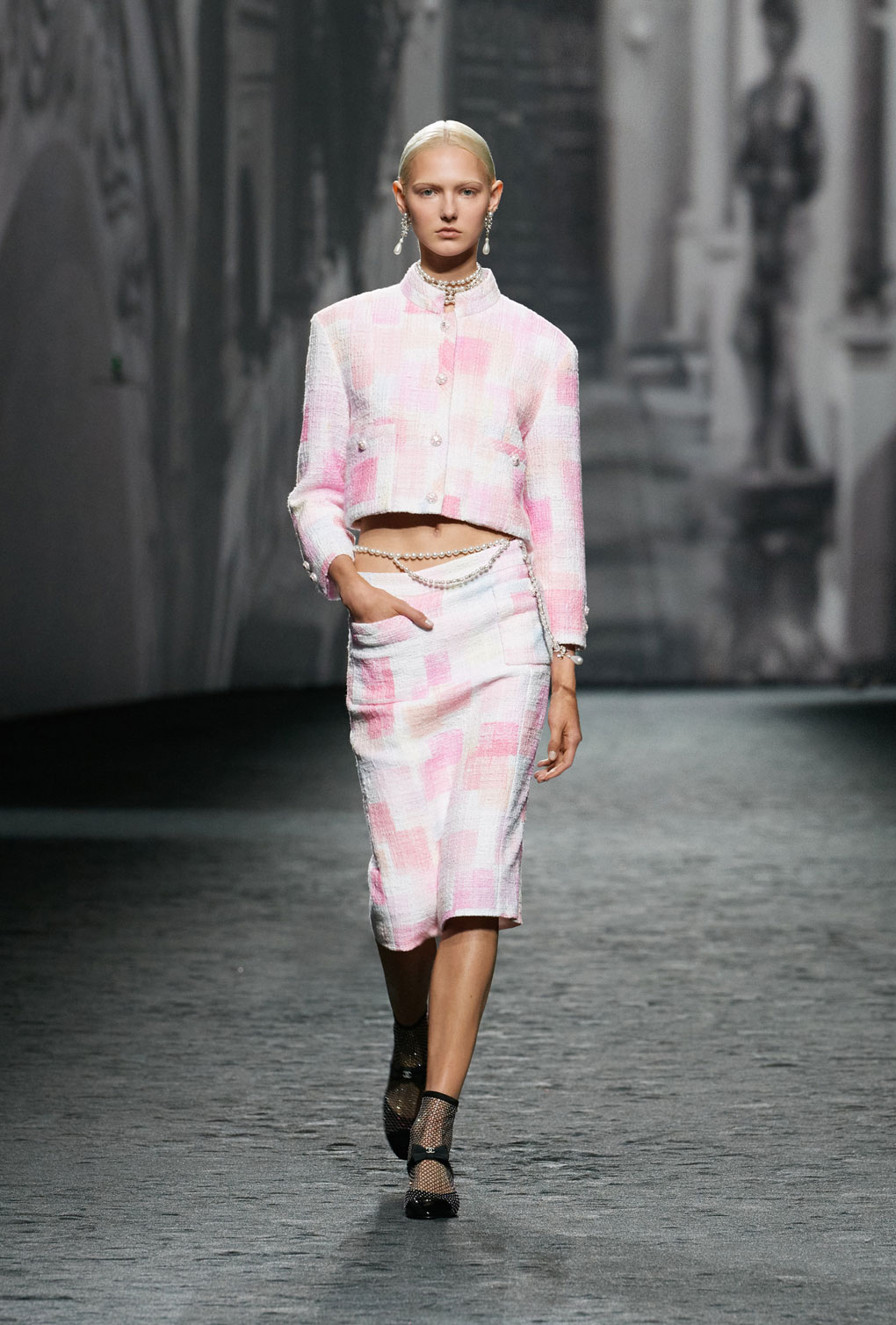 Similarly, the collection spoke to the re-imagining of our protagonist for the 21st century; feminine, alluring and confident.  An amalgamation of textures created depth for a silhouette otherwise characteristic of Chanel – bow appliqués, feather detailing and sequins all referenced the glamour and prestige of the film’s sumptuous setting.  A monochromatic colour scheme bloomed into pastel tweeds and deconstructed prints of primrose pinks and oranges, before defaulting back to an inky palette suited to the striking evening looks set to finish the narrative. 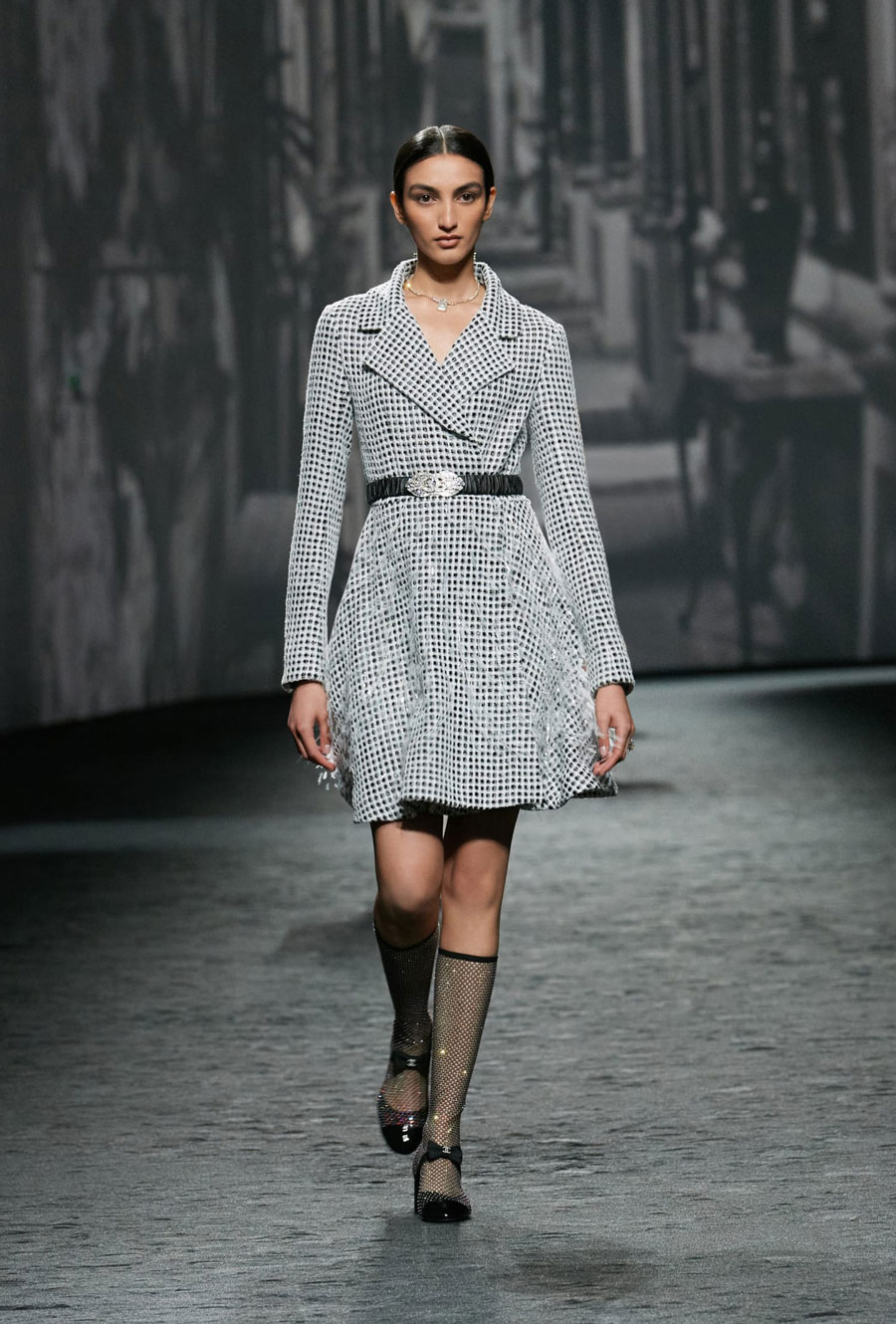 The emphasis on the waist was apparent – either cinched or revealed through midriff-baring coordinating suit sets.  Bare legs sporting ankle or shin-length fishnet socks added a further hint of playful coquettishness throughout the collection.  Freedom of movement became a motif.  For Chanel SS23, expression is not be restricted, either literally, through what’s being worn, or conceptually, through how it’s presented. 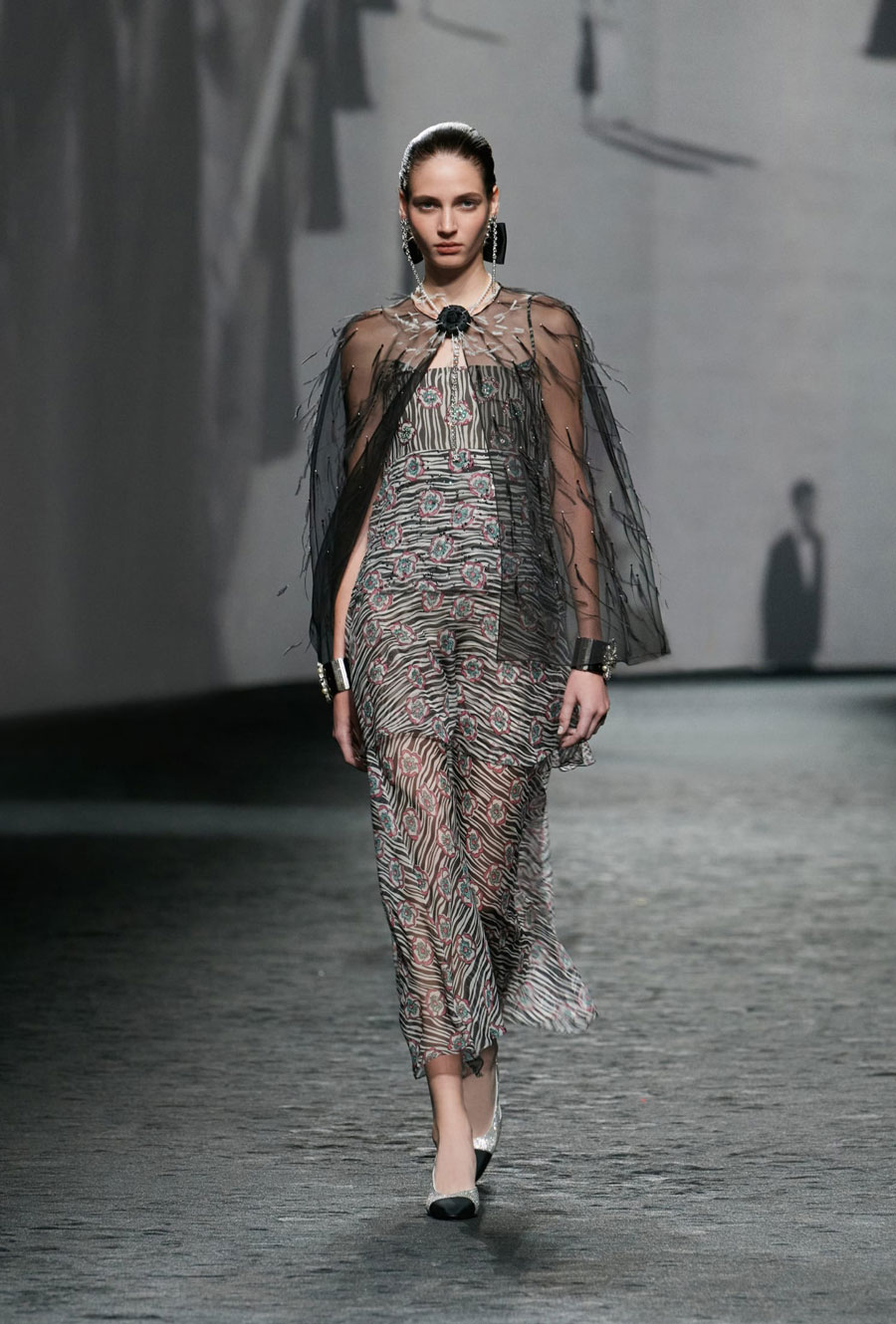 And, perhaps hinting at the allure of mystery and intrigue referenced throughout the film, seduction came framed in gold silken dresses and delicate chiffon creations.  Whether it’s the modernity of Kristen Stewart or the classicism of Gabrielle Chanel herself, Viard took us all on a journey of how to be the stars of our own stories next summer. 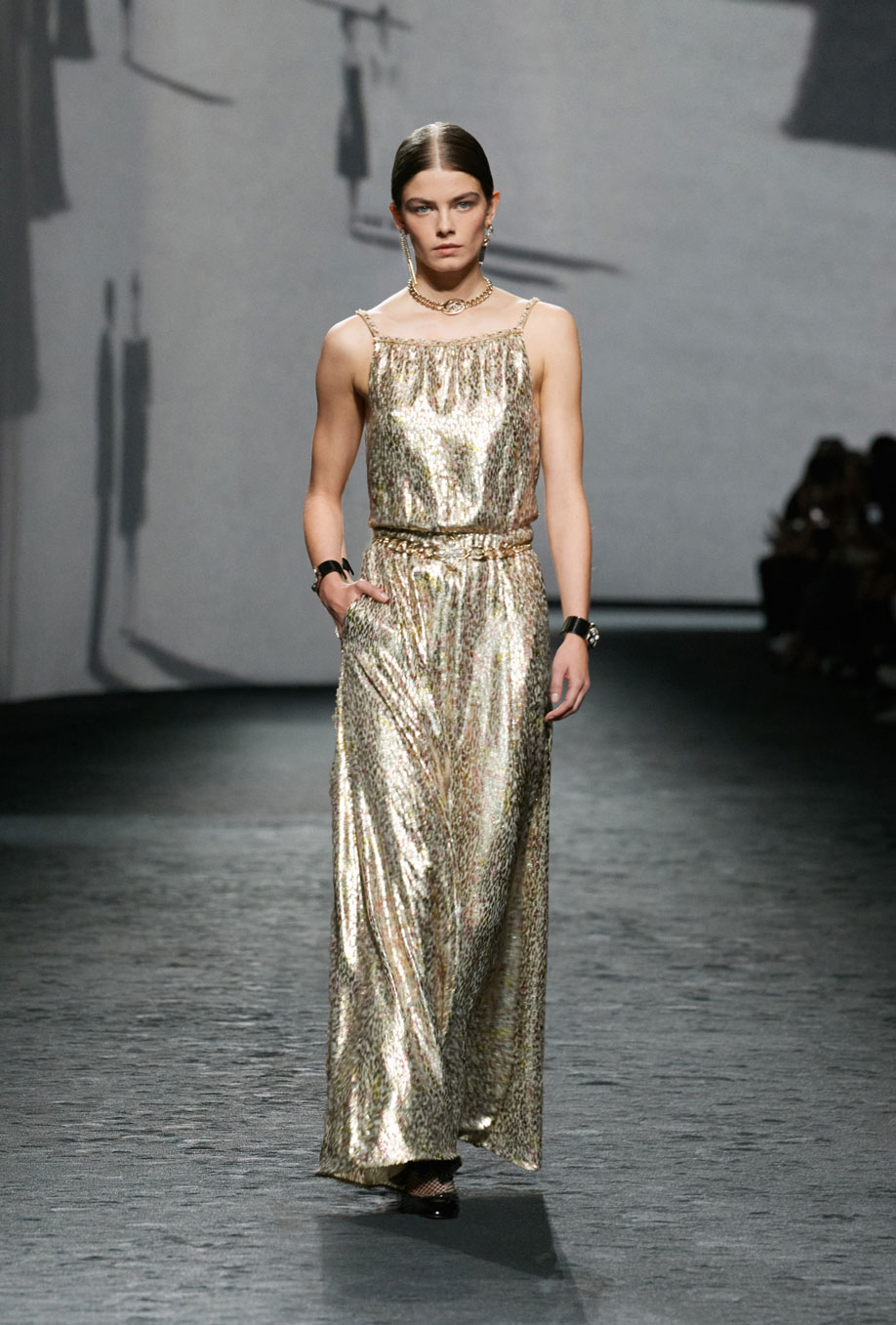