Over the last several years, people have spent too much time apart and worried about the future thanks to a global pandemic and a dangerously polarised political landscape.  Opportunities for togetherness, it seems, have been scant.  For the Alexander McQueen SS23 womenswear show at London’s Old Royal Navy College, creative director Sarah Burton drew upon these themes for a collection that searched for humanity and connection in a fragmented world, entitled First Sight. 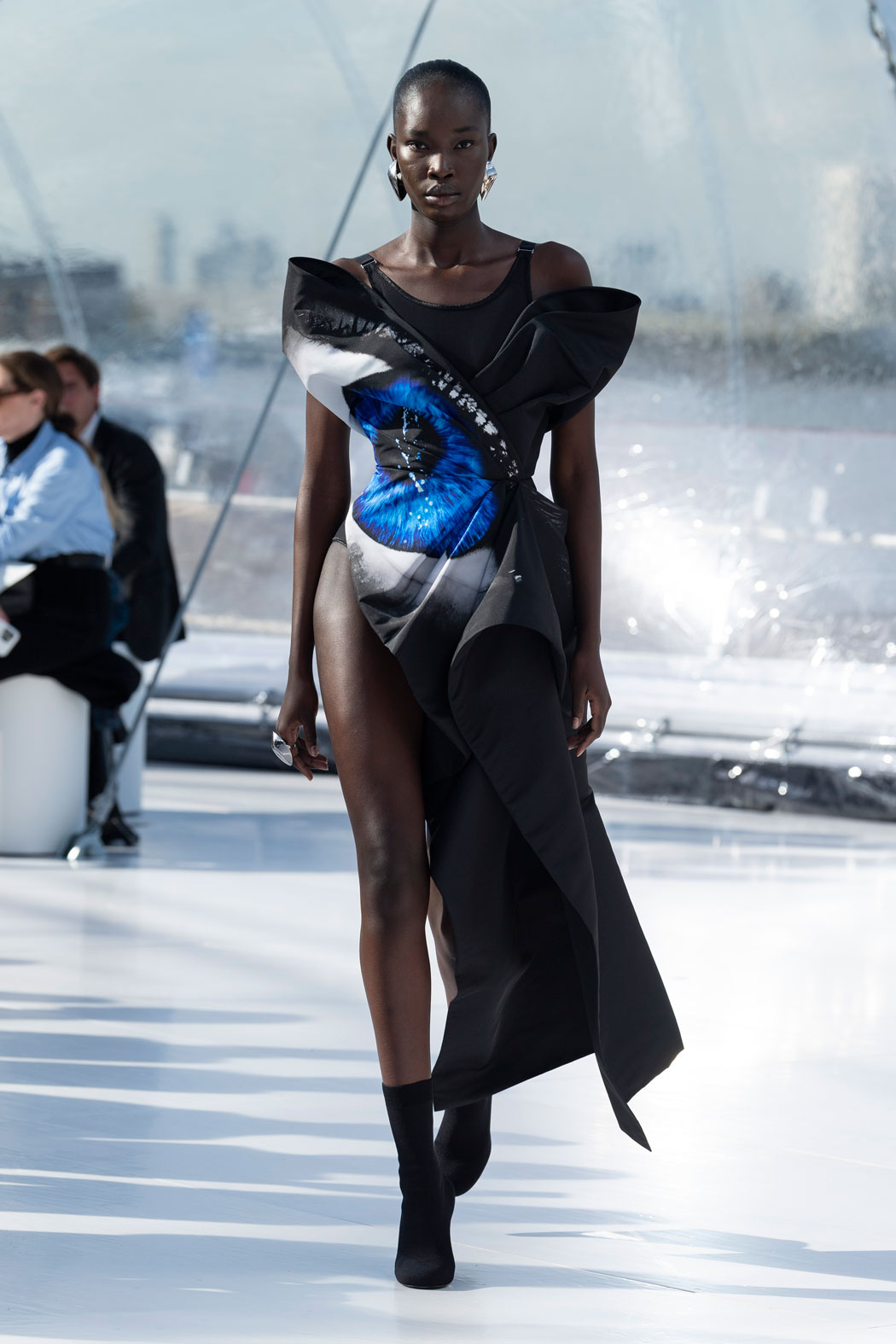 It’s perhaps no surprise then that the human eye was a prevalent motif throughout.  Cobalt and crimson irises peered out at the world from double-breasted suits, draped gowns and, most notably, a crystal embroidered bodysuit worn by catwalk icon Naomi Campbell.  As Burton herself explained it, “the eye is the symbol of humanity, a register of emotion, an expression of uniqueness.”  Such was its ubiquity that even the audience were seated in the shape of an eye. 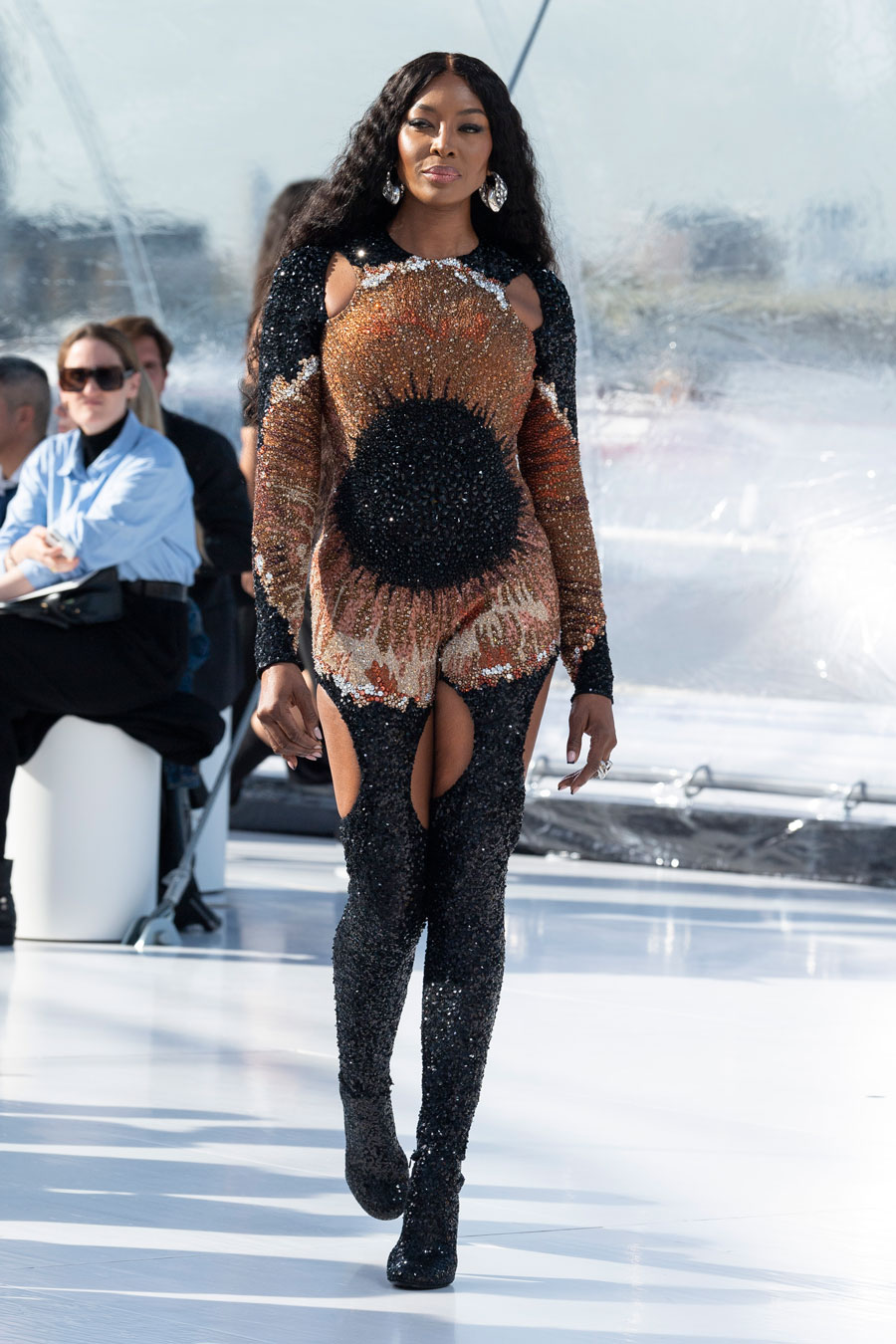 Elsewhere, the work of 16th century artist Hieronymus Bosch was another landscape of exploration.  The Dutchman’s art often straddled the line between beauty and darkness and was of particular inspiration to the late Lee McQueen.  Burton imbued bustiers, dresses, jumpsuits and corsets with the visionary’s iconography with a narrative that spoke to the strange and unnerving times in which we find ourselves.  A particular highlight came with the arresting off-the shoulder-calico tulle gown worn by Lucia Fairfull that closed the show and transmuted Bosch’s artistry into whitework embroidery. 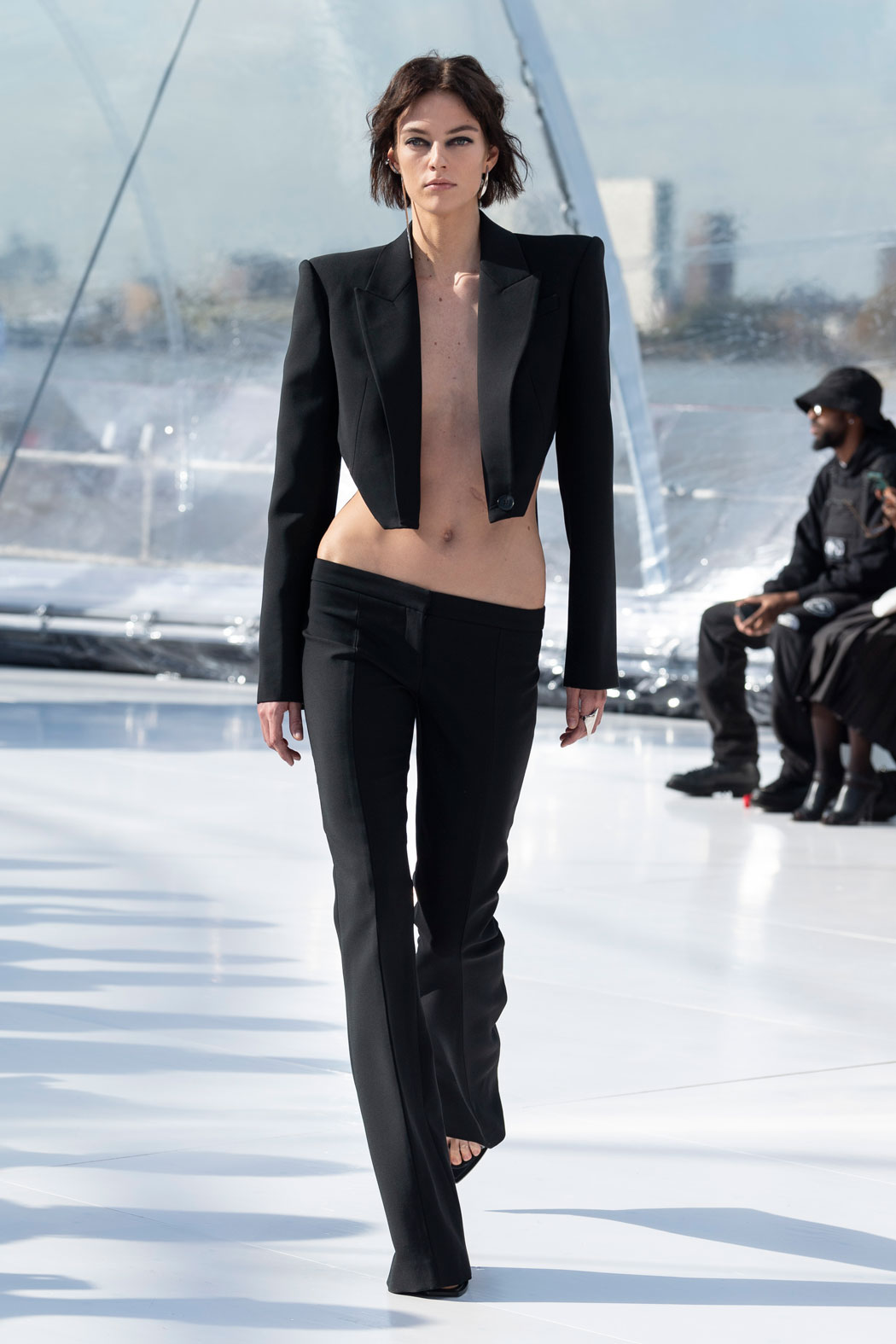 As always, the signature McQueen flair for the dramatic was a welcome and ever-present subtext to the collection.  Tuxedo jumpsuits were deconstructed and precisely tailored to expose the midriff and the small of the back in a welcome hybrid of Eighties power dressing and Noughties nonchalance.  By contrast, red and blue slashed dresses with metal detailing stood out for their nods to fetishism and empowerment. 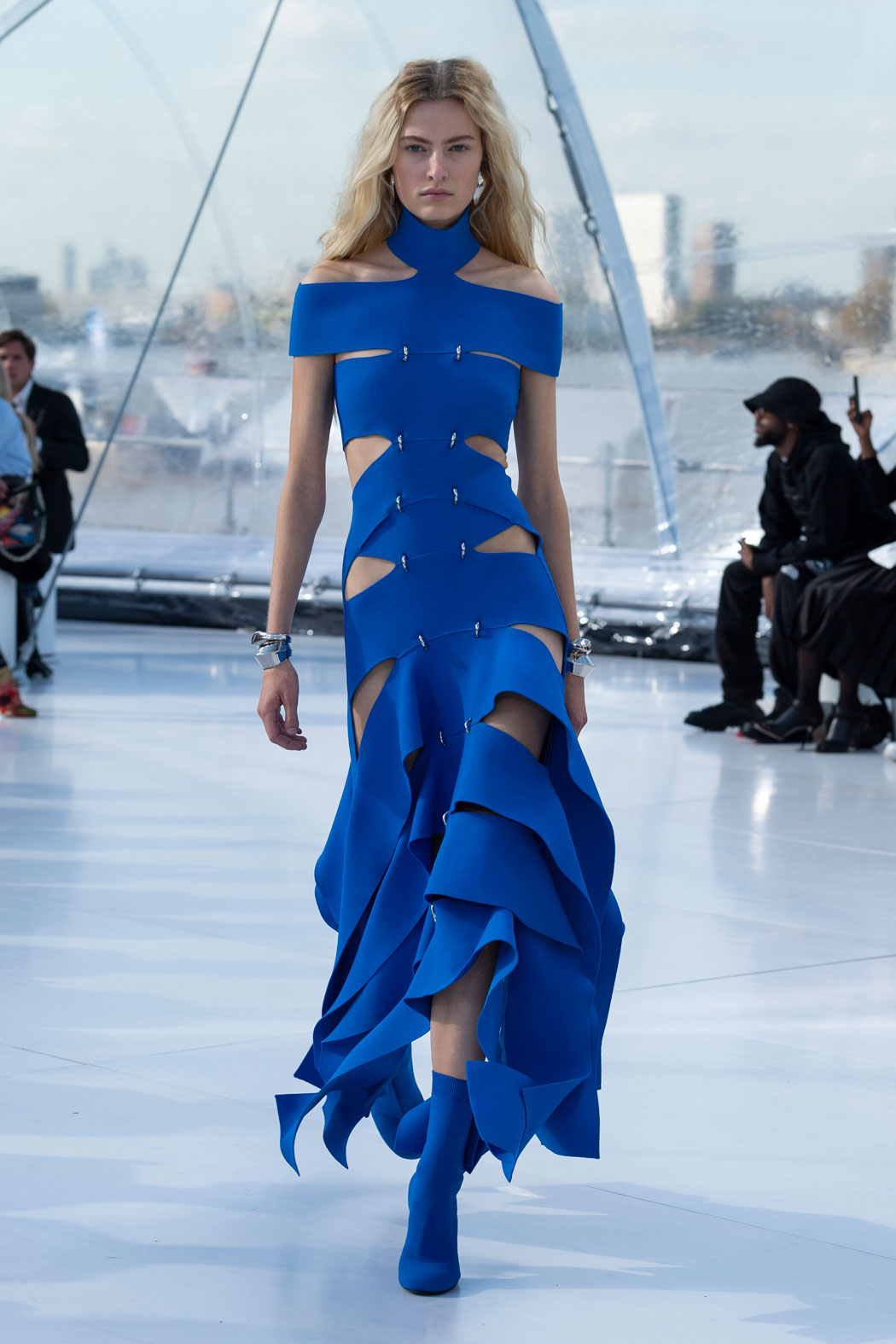 In the end Sarah Burton’s message was clear.  For Alexander McQueen SS23, we should be uniting to embrace our uniqueness and differences, rather than growing ever further apart.  Even in these most uncertain of days, there’s still beauty to be found in darkness – we simply need to come together. 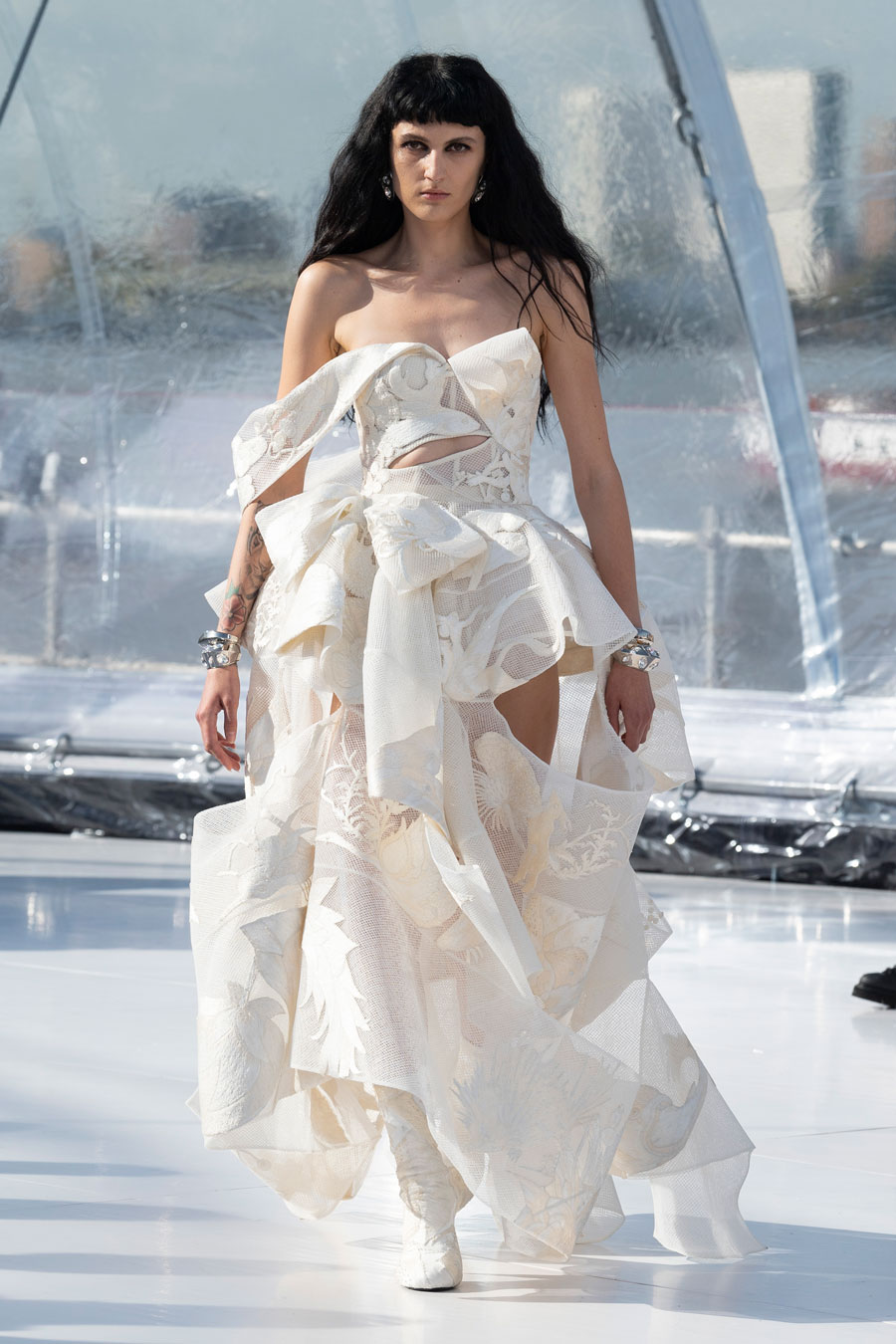